Lobster Laksa Udon. Stop, go back, and read that combination of words once again. I really hope that like me, your heart is now pumping with excitement, and your stomach growling with enthusiasm. 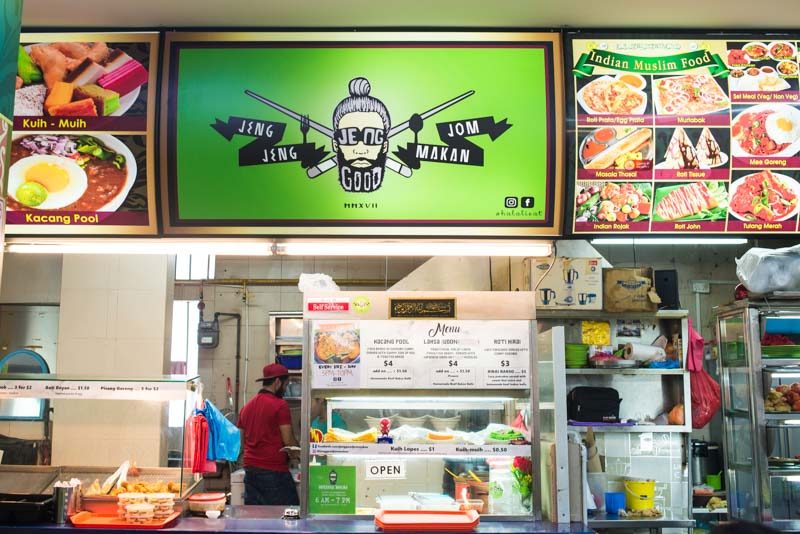 Jenggood Jom Makan‘s owner Hans certainly has creativity for being able to come up with such a unique dish. Located in the Padi Emas Eating House in Jurong East, the stall is a short bus ride away from Jurong East MRT station. The base of this kind of laksa broth is fish stock. To make the stock, Hans boils tenggiri (mackerel) in water. His laksa is also very rudimentary in the sense that it doesn’t have any “fancy stuff”, referring to the usual ingredients of cockles, fishcake and taupok. 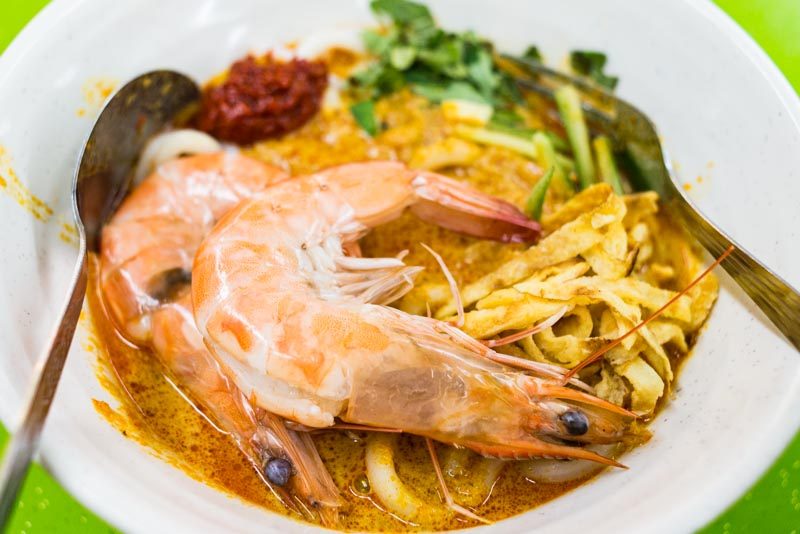 Learning this, I was brimming with excitement to see how different Malay-style laksa would be from regular laksa. The first dish I tried was the Laksudon ($4) (laksa udon) with prawns ($1.50).

The broth, simmered for about 1.5 hours, was thick with an inviting light-orange sheen. On its own, the flavour was pretty mild, and it’d be perfect for those who aren’t fans of strong spices. I rather enjoyed the lightness of the broth as it was quite unique. In fact, I thought that its lightness complemented the rich and flavourful udon. According to Hans, he also chose to use udon instead of laksa beehoon because it is better able to hold the laksa broth in between strands. 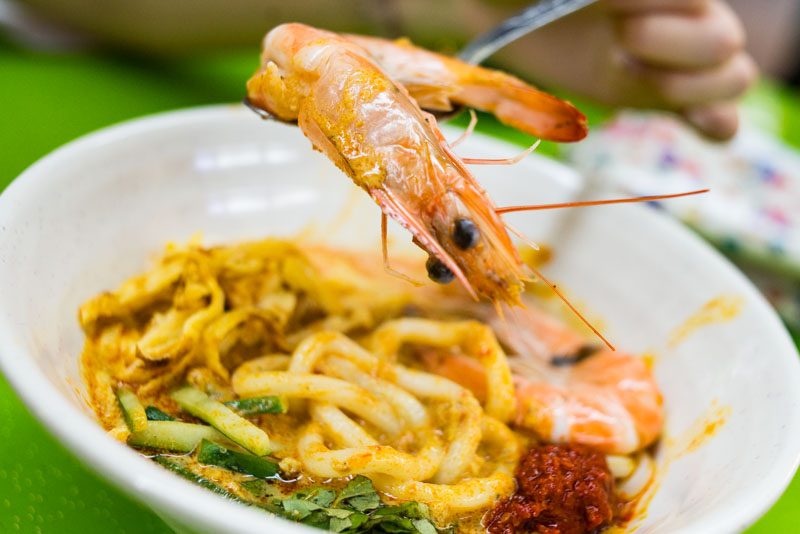 The prawns were fresh and succulent, though I would have preferred if the flesh was a little firmer. Still, I enjoyed the flavour it added to the laksa, and the fact that both prawns were quite sizeable. 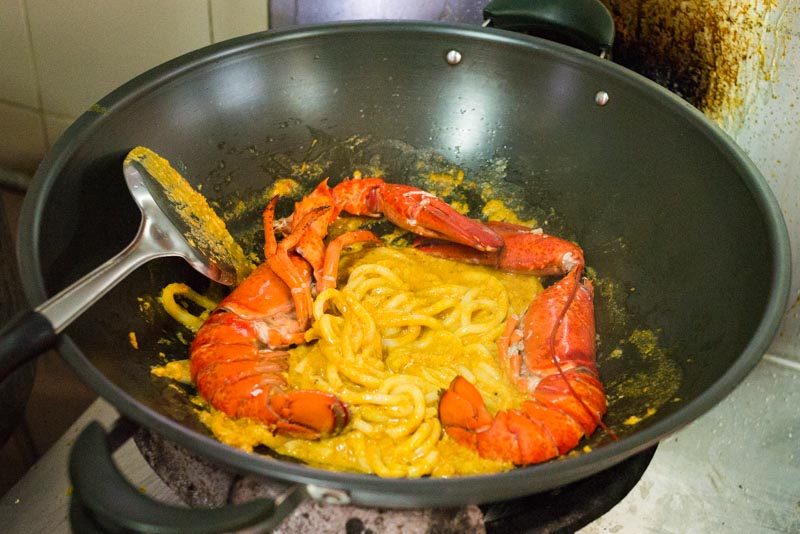 Now, on to the true highlight of the day: the Lakster Deluxe ($34.90). This version of the laksa udon is topped with sotong, mussels, prawns, and needless to say, lobster. The portion of seafood was rather generous, and overall, it’d probably be enough to feed two small eaters. 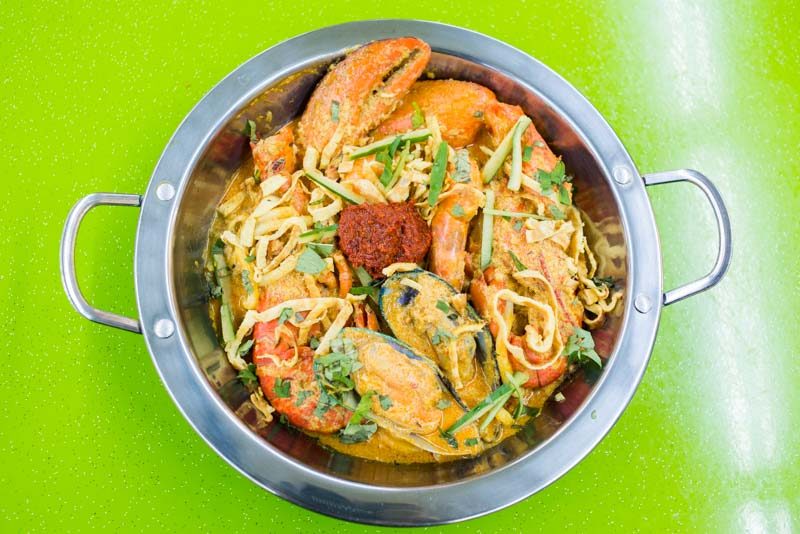 As I wanted to amp up the spice, I decided to mix all of the sambal into the laksa. Boy, oh boy, was that the right choice!

The fragrance of the homemade sambal, combined with the sweetness of the seafood, intensified the flavours of the laksa in a deeply satisfying way. The broth was more full-bodied, and carried an even stronger aroma. With a bigger portion of everything in this Lakster Deluxe, each strand of udon was enveloped in the enhanced broth. I also loved that the sambal added a little bit of heat to the broth, and relished each bite with glee. 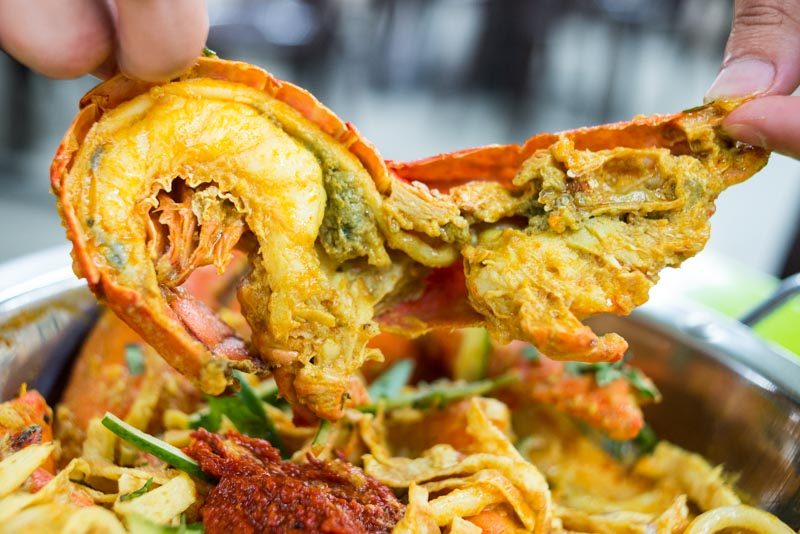 In terms of the lobster itself, I found it a little overcooked and rather tough. It was, however, fleshy and packed with flavour. The lobster was of the Boston variety, which Hans says has greater flavour, and cooks to a more beautiful colour than other types of lobster. Not forgetting the rest of the seafood – the prawns were tasty, and the mussels were bursting with flavour. The sotong, on the other hand, was a tad bit overcooked.

Overall, I thought that the Lakster Deluxe was rather worth its price, considering the generous amount of seafood given. Furthermore, this unique blend of flavours is something you won’t find elsewhere! 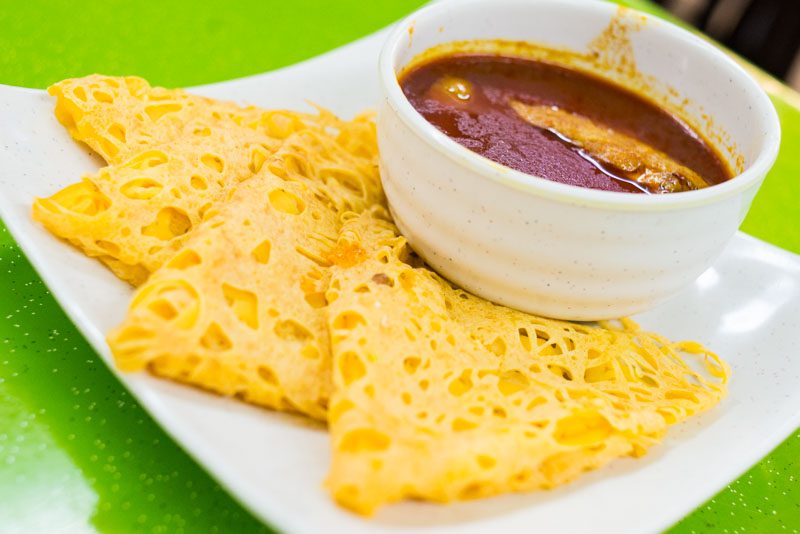 Another dish that I tried was the Roti Kirai ($3) (otherwise known as Roti Jala or lacy pancakes) with Chicken Curry.

This pancake is sort of like a crepe and has a pretty lace-like pattern, but the way it is eaten (with curry) mimics that of roti prata. Made of flour and egg, the thin pancake is a lot lighter than prata, and much less oily. 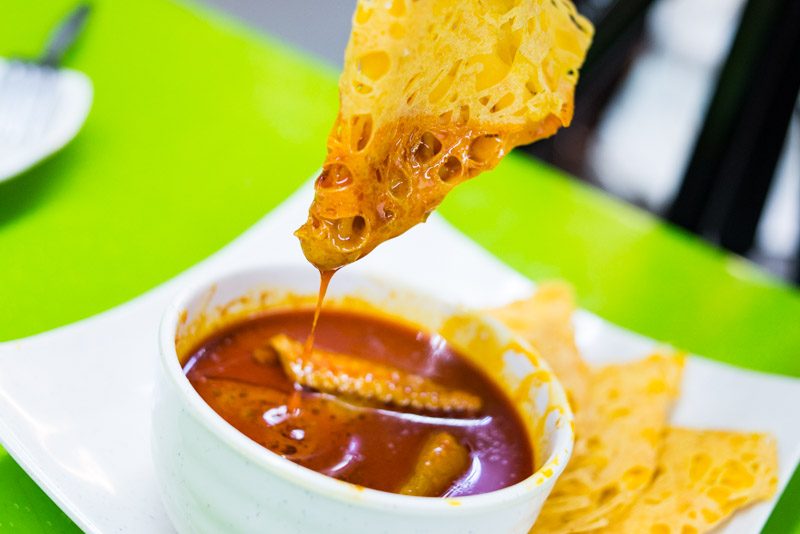 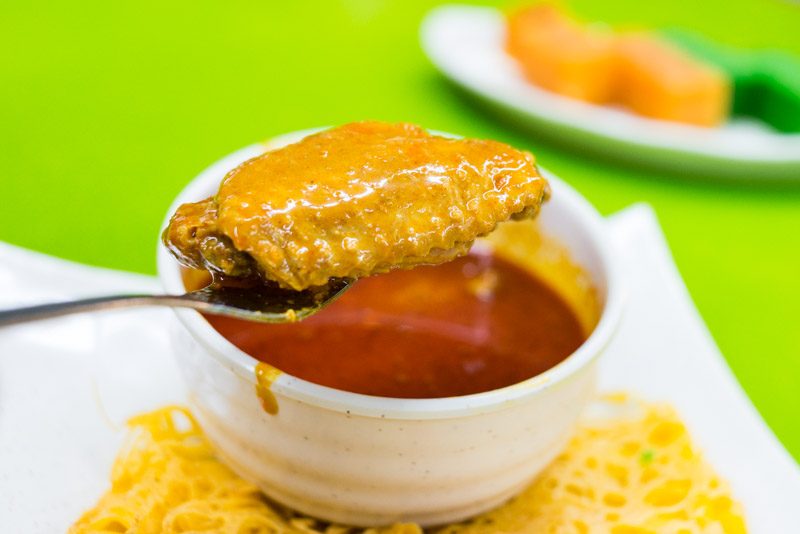 The pancake has sort of a chewy texture, but is rather bland on its own. Paired with the curry, however, it becomes something that could seriously give roti prata a run for its money.

I was also given two mid-wings that were so tender the meat could easily fall off the bone. Sticking true to its Malay roots, Jenggood Jom Makan also offers some sweet Malay treats as dessert. I tried the Kuih Lopes ($1), which is made from glutinous rice that is wrapped in banana leaves and boiled. Coconut shavings coat the surface of the kuih, while a sugar syrup is slathered on top. 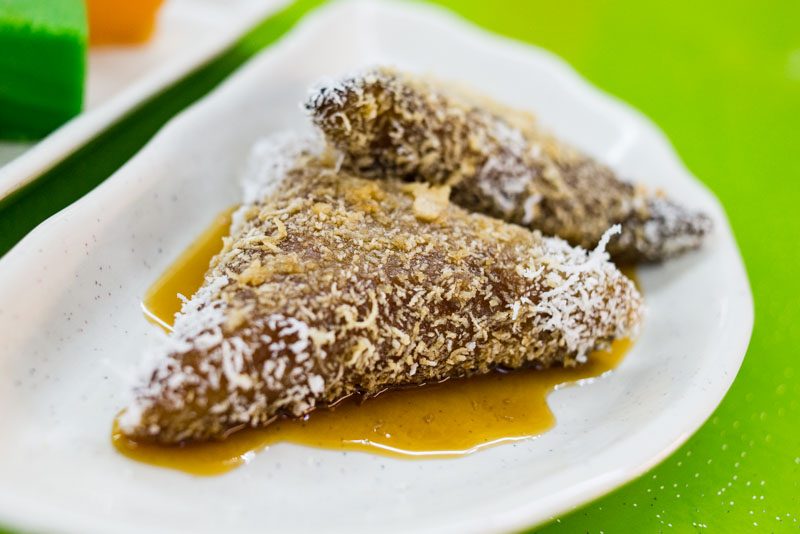 It was my first time eating Kuih Lopes and since I’m not a fan of glutinous rice, I can’t say I loved it. However, as glutinous rice is usually prepared as a savoury dish, I rather liked the idea of a sweet glutinous rice dish. 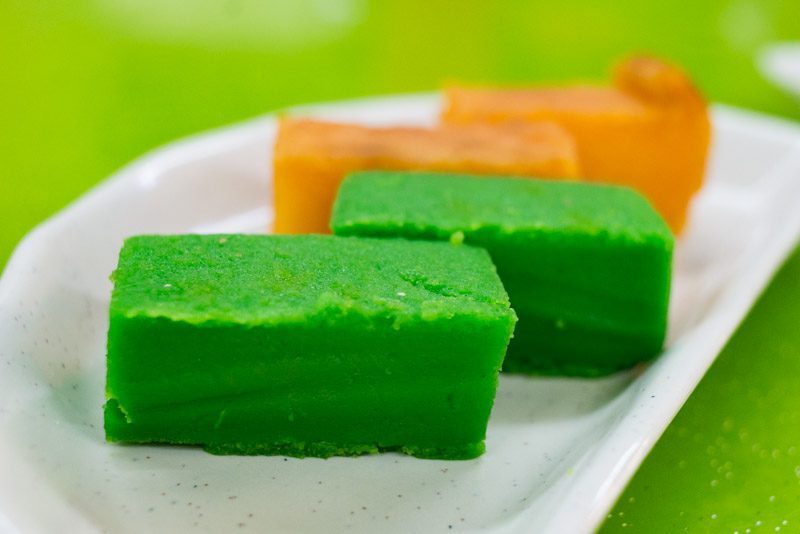 I also had some Kuih Muih ($0.50) in two flavours: tapioca and pandan. As the tapioca kuih had a more distinct taste, I preferred it to the mellow pandan flavour.

Overall, I would say that Hans has managed to successfully elevate these humble Malay staples. However, he says that because he doesn’t really look Malay, people feel ambivalent towards how authentic his laksa could be. As such, he decided to incorporate lobster and udon to appeal to a larger audience.

I would highly recommend heading down to be served some really earnest food. But don’t comment on how Hans doesn’t look Malay, it’s kind of a sore spot for him! Grab A Friend & Head Over To Pizza Hut To Enjoy...