I’m a person who doesn’t like to queue and wait for my food. However, after hearing that people willingly queue up to an hour for a bowl of fishball noodles, I conceded. I decided to do what Singaporeans do best: join in the queue. 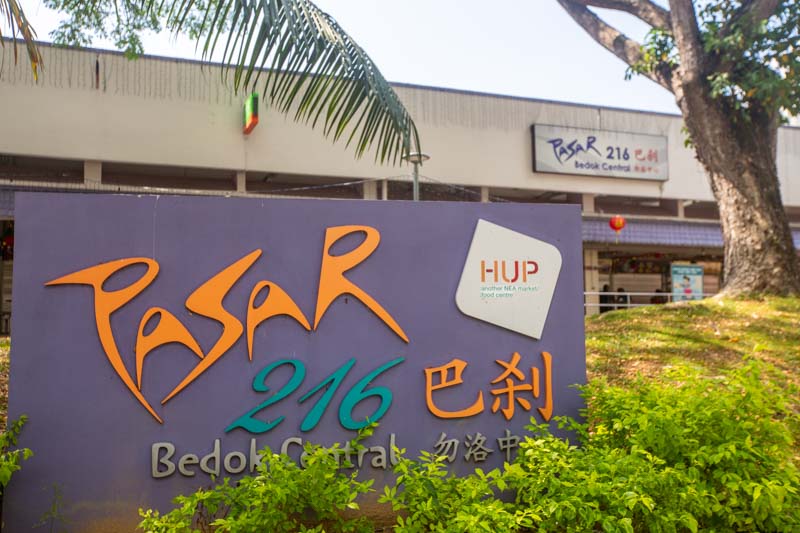 Unlike what its name suggests, Joo Chiat Chiap Kee (如切捷記) isn’t in Joo Chiat. It’s actually amongst a sea of hawker stalls in Bedok Market and Food Centre. 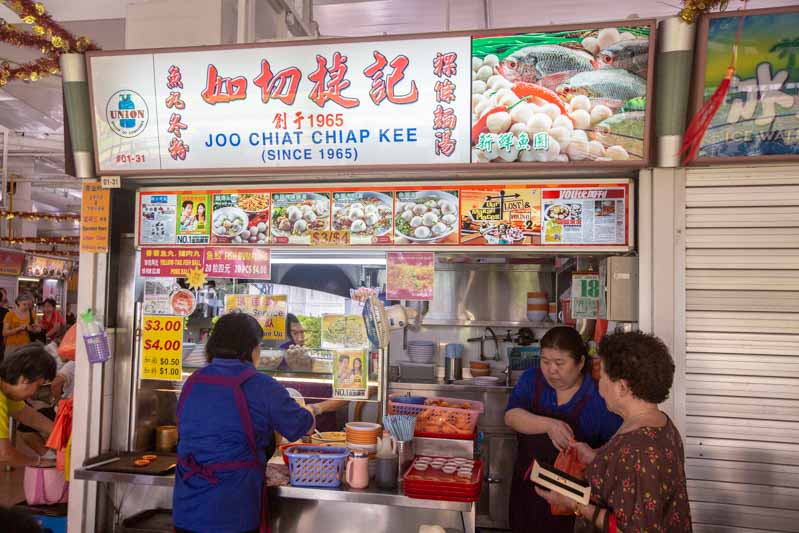 With a history dating back to 1965, the stall has garnered over half a century of experience. 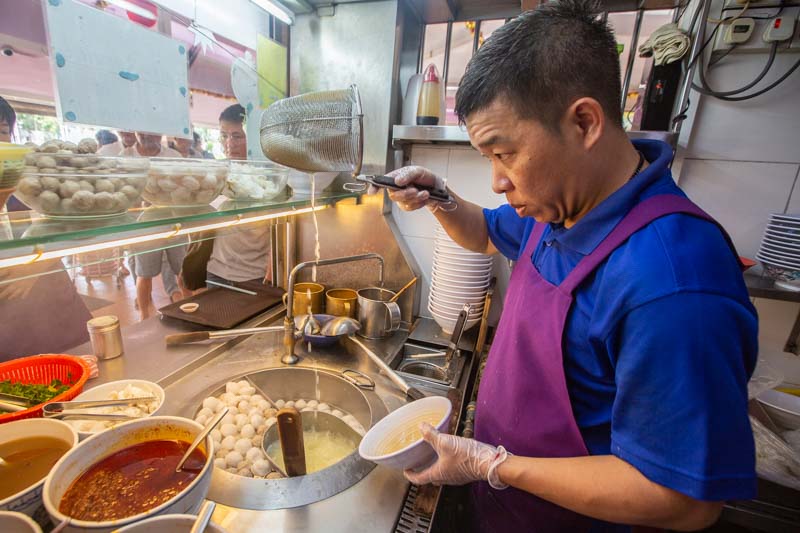 A third-generation hawker currently runs the stall. It was his grandfather who started the business in Joo Chiat Market 54 years ago. They moved to Bedok in 1979 and have been here ever since.

The current owner has been at the helm of the stall for 10 years. Despite so, his father, the second-generation owner, still occasionally helps out at the stall. He does so for a few hours a day, so we didn’t manage to catch him while we were there. Prior to my visit, I heard that queues for this stall can be ridiculously long. So much so that it can stretch to outside the hawker centre. I didn’t believe it at first, honestly. But I managed to witness something of a smaller scale during my weekday morning visit.

Queues for fishball noodles aren’t normally that long. I mean, my go-to hawker food as a child was always fishball noodles, so I’m well aware. Therefore, there must be a good reason why Chiap Kee faces such long lines. To find out, I got myself a bowl of Mee Pok Dry (S$3 for small, S$4 for large). It’s the most popular choice of noodles, according to the staff. Prior to serving, the owner cooks the noodles in boiling-hot fishball soup. He then mixes it thoroughly with a variety of sauces and ingredients.

The crispy pork lard and shallots gave the noodles a powerful savouriness. However, it was the sambal chilli that I liked the most. It packed a real punch of heat and had a smoky flavour which clung onto the noodles excellently. 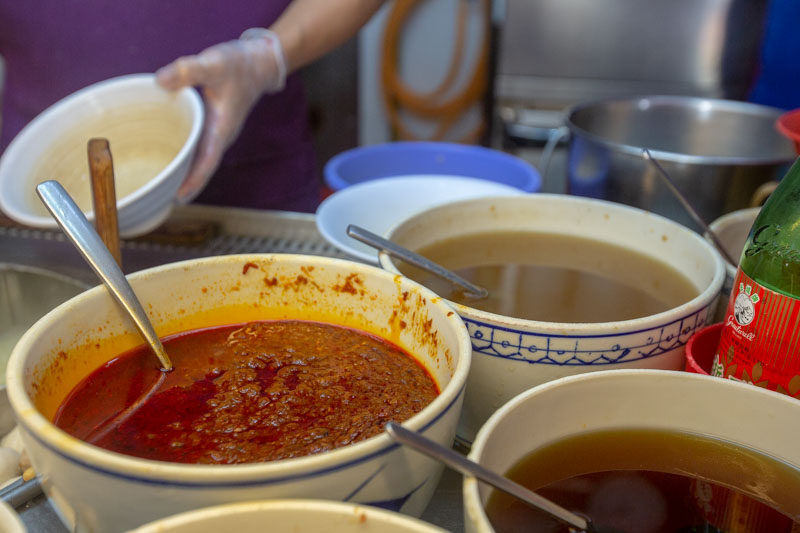 The owner wasn’t willing to reveal much about his sambal as there’s a secret recipe behind it. But he did divulge that there’re actually 10 ingredients in it. No wonder it’s so aromatic!

In it, I could pick up the distinct umami taste of dried spicy shrimps. The owner later disclosed that he adds in crumbles of dried flatfish too to further enhance the sambal‘s flavour. 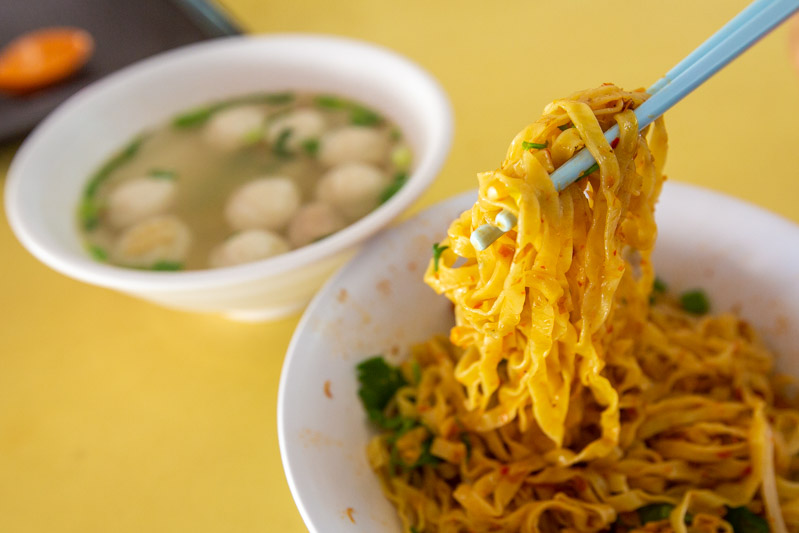 As for the noodles, we felt that they had the perfect cook. They were springy and chewy and absorbed the flavours of the seasonings and chilli very well.

However, we didn’t feel they were anything extraordinary to rave about. They were lacking specifically the acidity of Chinese vinegar that would otherwise be prominent in fishball noodles. That said, it’s the fishballs that are the stars of the show. Absolutely chewy, they seemed like they could bounce back into the bowl if I dropped them on the table.

Unlike most fishballs I’ve tried, the fishballs at Chiap Kee don’t possess a briny taste. Instead, they encompassed a very fresh taste that’s hard to come by. Right off the bat, I also noticed that Chiap Kee’s fishballs come in very irregular shapes. It turns out that the owner actually hand-makes his own fishballs. Every morning, he and his staff begin preparing for the day in the wee hours. He also highlighted that they use the freshest yellowtail fishes from the market to make the fishballs and fish dumplings. They don’t use frozen fishes as they believe that that would compromise the quality of their fishballs. 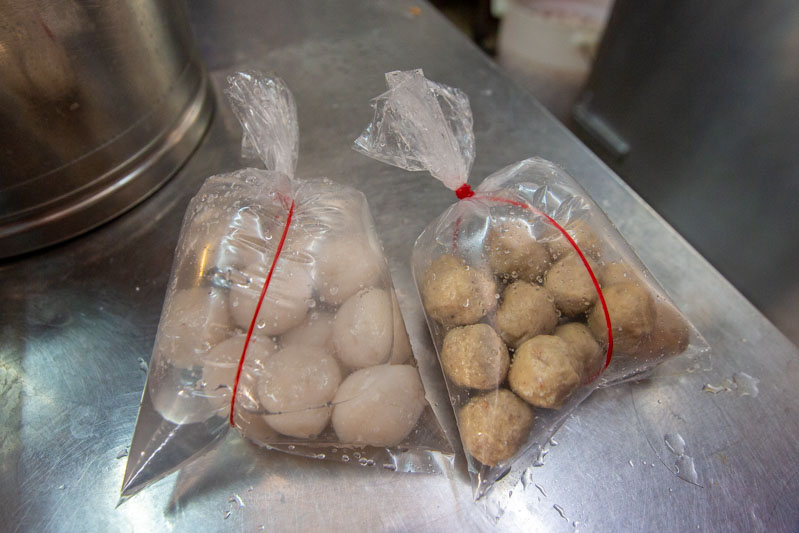 What also amazed me was that for every order, the owner gives a lot of ingredients. Five fishballs, one fish dumpling and one pork ball? Definitely worth it, if you ask me. Not to mention, the tantalising fishball soup was so addictive that we finished every last drop of it.

We thought the owner flavoured it with preservatives, but the soup is actually the stock that comes from boiling the fishballs. All the owner added was just a pinch of salt to give it a little seasoning.

To me, modest hawker foods, such as fishball noodles, are the best comfort foods. The simpler they are, the better.