When you think ramen, perhaps what comes to mind is a rich tonkotsu (pork bone) broth, or a lighter shoyu-based soup. If you were to pick a protein that pairs best with ramen, you might select chashu (barbequed pork), since it’s what most ramen bowls come with anyway, at least in Singapore. 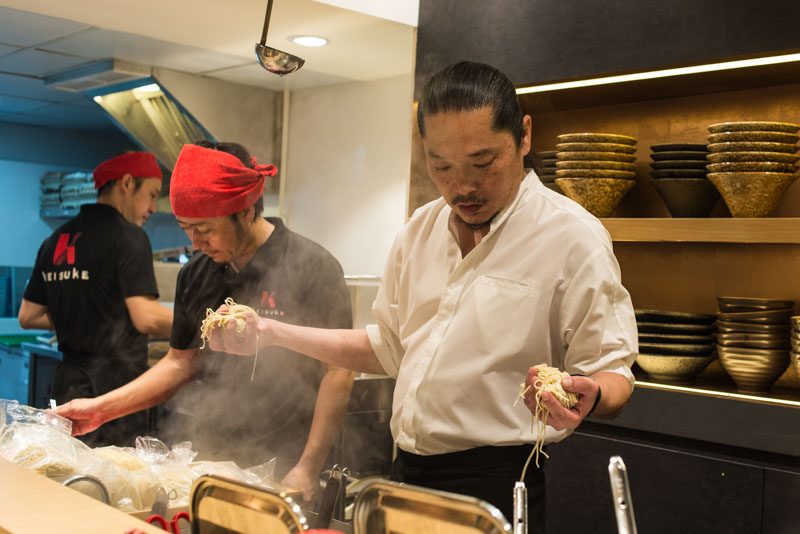 But, leave it to Chef Keisuke (who is notably the creator of the much-raved about lobster ramen and the founder of the well-established Keisuke brand), to come up with yet another unconventional, yet stunning ramen dish: duck ramen. 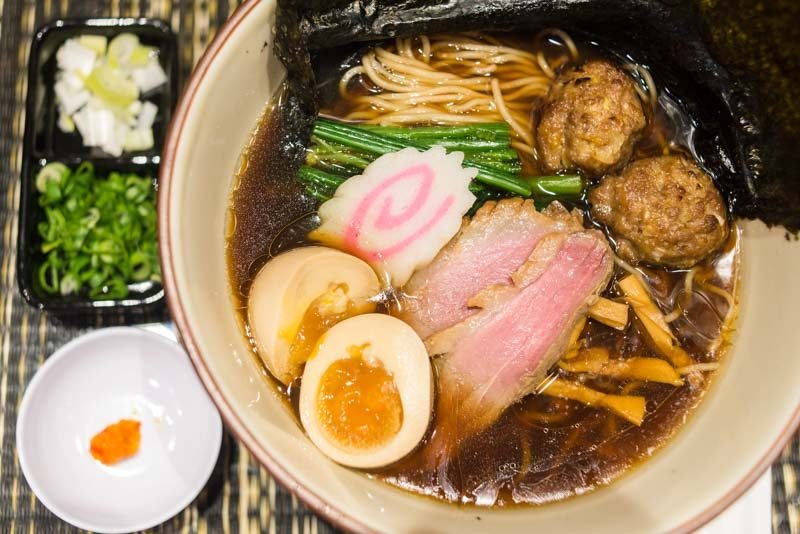 I first had the Hybrid Duck Broth Ramen (Clear Soup), which is supposed to be lighter than the Rich Soup. The ‘Special’ ramen comes with two slices of duck breast, two yuzu duck meatballs, and a sliced flavoured egg.

I’m usually not a fan of clear ramen broth, because I feel that it lacks the intense flavour you usually get with thicker ramen broths. After tasting Keisuke’s clear duck ramen broth, however, proved me entirely wrong. 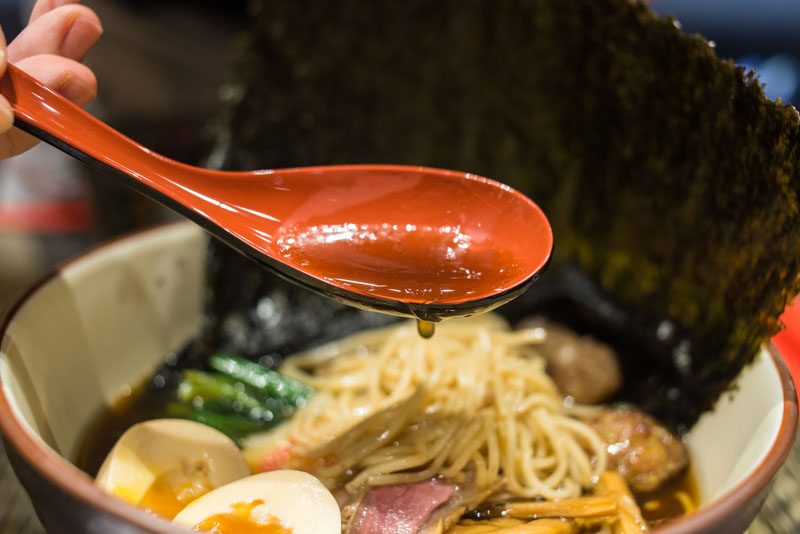 The clear ramen broth had an incredibly robust flavour, and I could certainly detect the essence of the duck in the broth. It reminded me of a shoyu-based broth, but with ten times the flavour and aroma.

Honestly, if someone had fed me a spoonful of the broth with a blindfold over my eyes, I could never have guessed that it was clear, save for its thinner consistency. Despite its deep flavour, it retained a certain lightness, making it easy to drink a copious amount in one sitting. So if you’re wary of eating ramen because you’re afraid that it’ll become cloying, this is the perfect bowl of ramen for you. Anyway, it’s so good you’ll want to finish every last drop.

To produce such good flavour, the broth is simmered for five hours, and a whole duck is used. The flavour of the duck is thus slowly infused into the broth. 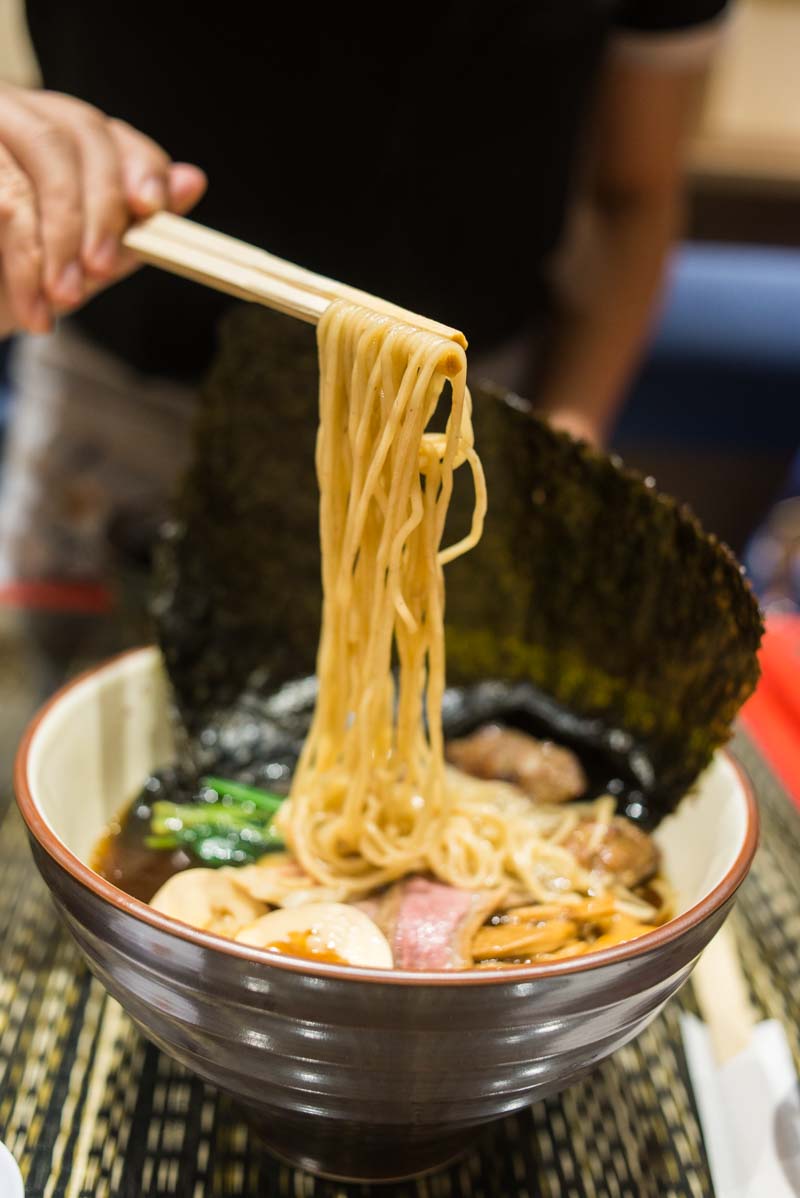 The ramen noodles were relatively thin and pleasantly springy. I thought it went perfectly well with the clear broth. 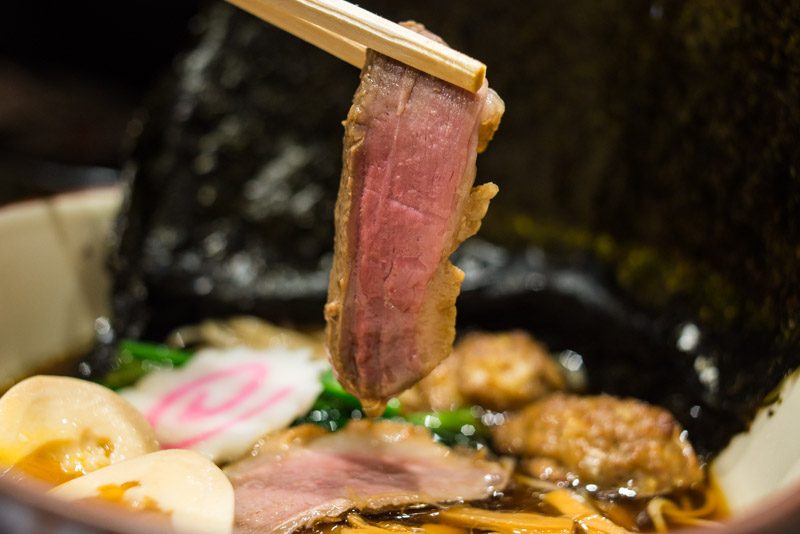 On to the star of the dish — the Irish hybrid duck. The duck had a beautiful pinkish hue, and it almost seemed to glisten in the light.

As I bit down on the meat, it fell apart in my mouth with hardly any effort on my part. Soon enough, the umami of the juicy, tender duck enveloped my mouth, and I was in duck heaven. 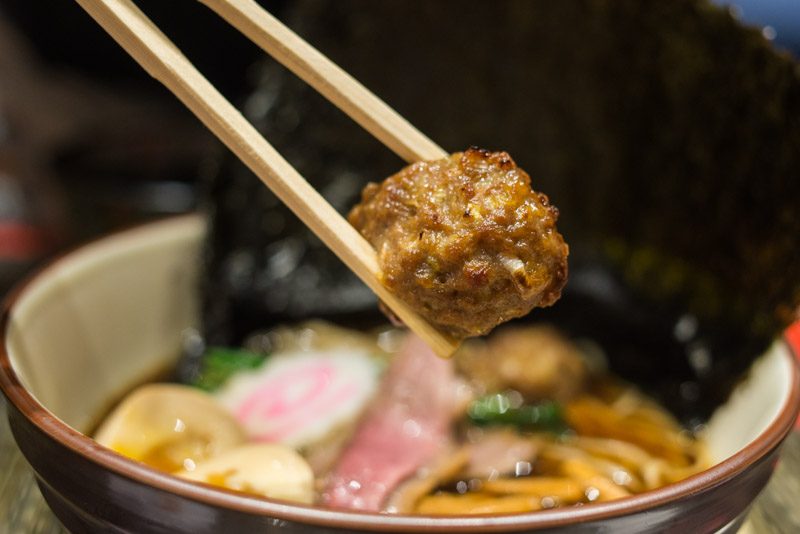 While the duck breast slices were delicious, what was even better was the yuzu duck meatballs. Made with both duck breast and duck thigh, these melted in my mouth the moment I bit into them.

I could also taste the duck fat that had melted into the meatball, making it incredibly juicy. It took me a while, but a subtle yuzu flavour surfaced right at the end, a perfectly sweet finish to a bite of pure flavour. 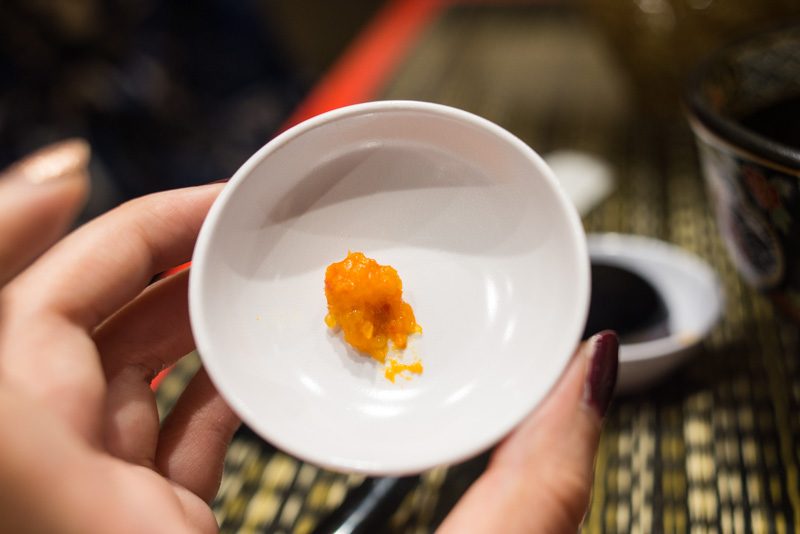 Each bowl of ramen also comes served with a small dollop of yuzu paste, which, when mixed into the broth, added a refreshing citrus tang that further enhanced the flavour of the broth. Oh, and if you’d like to add an extra bit of fragrance to your ramen, sprinkle this ultra special blend of seven peppers. 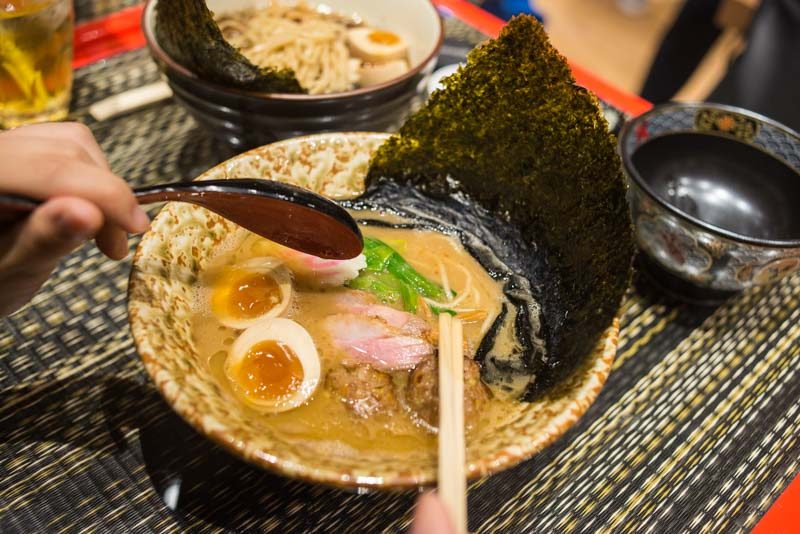 Of course, my experience at a speciality duck ramen restaurant wouldn’t be complete if I didn’t try the Rich Soup as well. This broth is prepared differently from the clear broth — it is simmered for eight hours, and the duck is broken down to expose its bones and cartilage. The result is a much thicker, cloudier broth that has an almost gel-like texture. 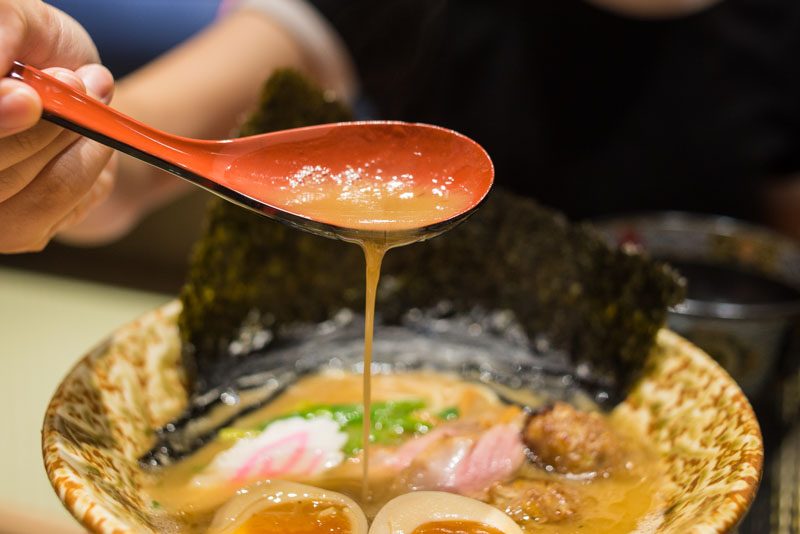 The broth had an even more prominent duck flavour than the clear one; it was incredibly intense. There was also a milky quality to the broth which made it more full-bodied.

If I were to provide an analogy to compare the two broths, the clear soup was like a warm embrace with a duck, while the rich soup was a bone-crushing hug. 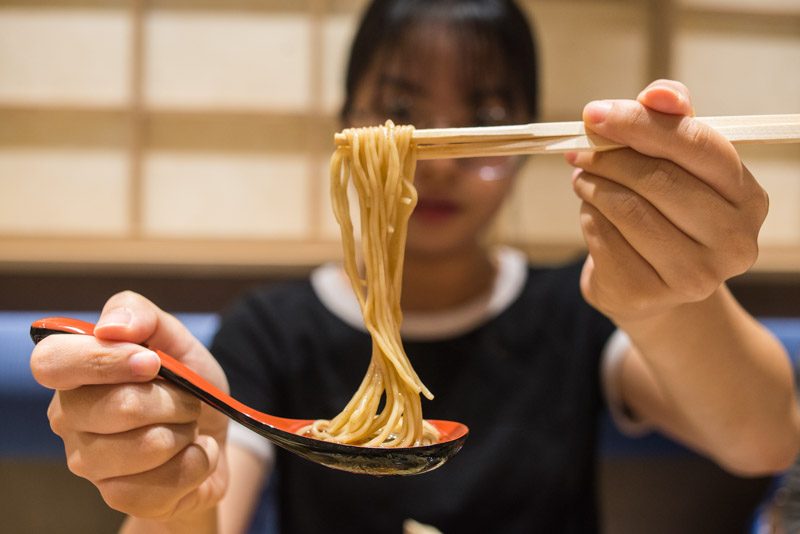 The ramen noodles used were thicker than that of the clear soup, in order to trap more of the thick broth in between strands.

I preferred the clear soup, as the rich one was a little too overwhelming for my liking. But if you’re craving for something more filling, or something that will warm you to the core, the rich soup is the one for you. 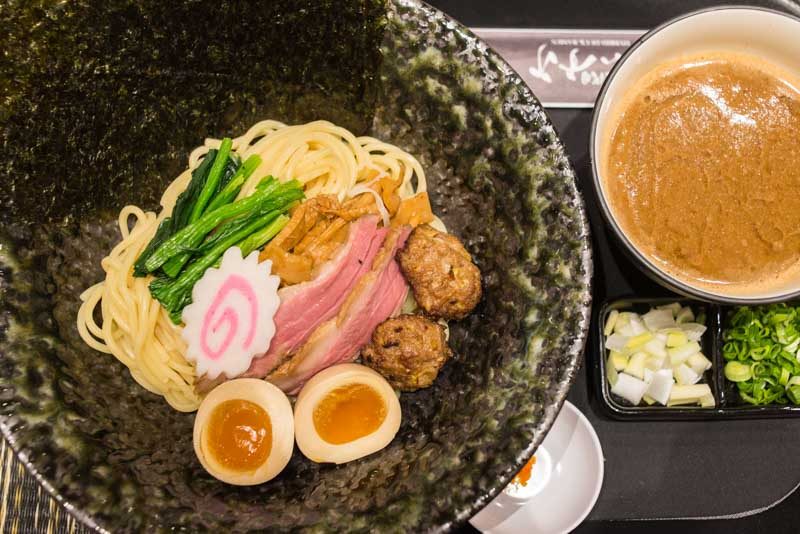 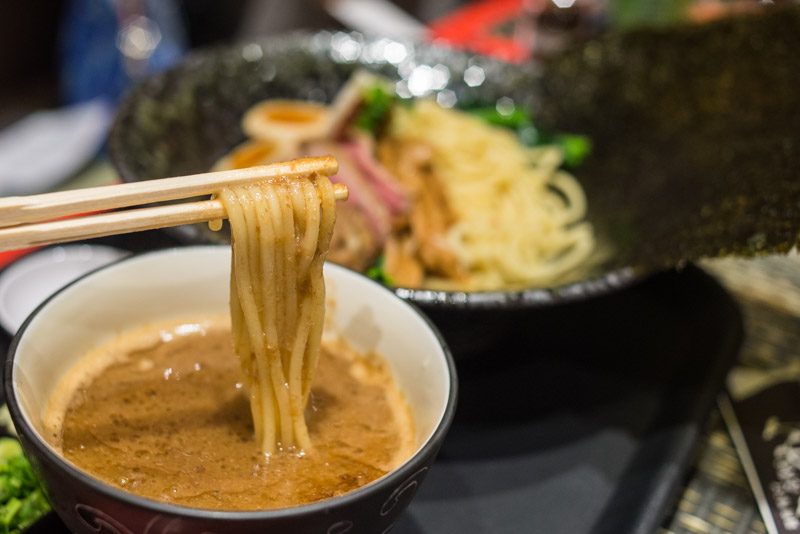 Itching for something different, I also had the Hybrid Duck Tsukemen (Dipping Noodles) ($19.90 for the ‘Special’). I found the dipping sauce to be a more concentrated version of the rich soup, though it was quite oily. The ramen noodles were also much thicker and had a chewier texture. These were really fun to slurp up! At the end of my (very long) meal, I was utterly satisfied. Each ramen dish I tried was stellar, and I think the concept of duck ramen will be here to stay.

Though the food at Kamo Soba Keisuke is a little pricey, I believe that the quality of the food you get is worth every penny. Ramen lovers, you must try this at least once!

Previous articleEggs-perience An Eggs-cellent Easter Sunday Lunch Buffet At PARKROYAL On Pickering This 1 Apr
Next articleTendonGo!: Enjoy This Authentic Tempura Don With Deep Fried Ramen Egg At Only $9.80 In Tanglin 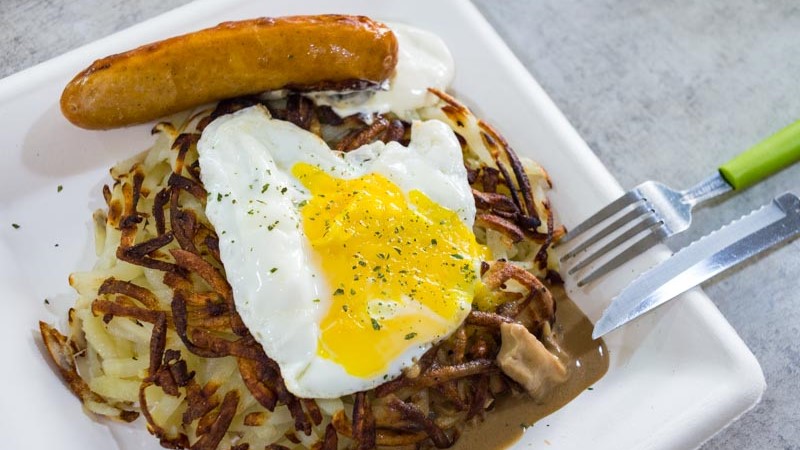 Ivan’s Carbina, Woodlands: “Definitely an audible crunch as I bit into...