Kanshoku Ramen Bar: Polish Off Bowls Of Truffle Ramen From This Food Truck In NorthPoint City 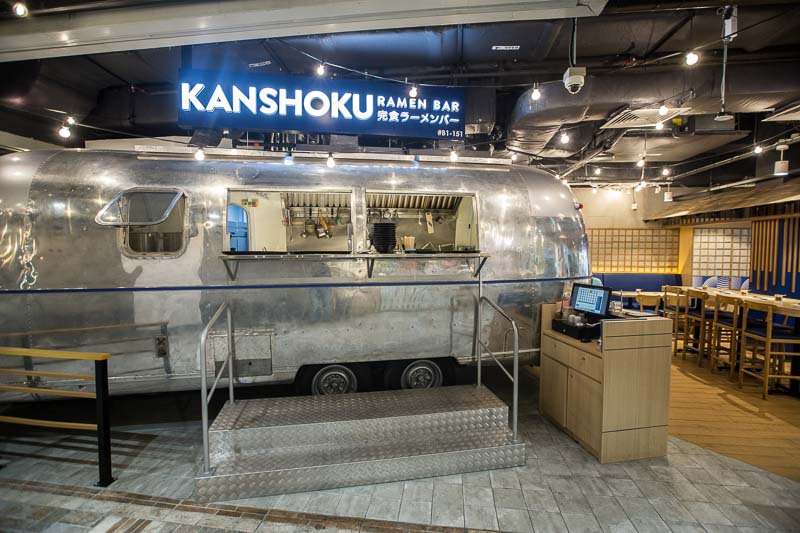 Have you ever seen a food truck in a mall? This food truck in Northpoint City actually has a pretty interesting backstory! The designer wanted an outdoor concept, and insisted on a food truck as well as fairy lights to be used in the restaurant.

Kanshoku Ramen Bar saw it as a stroke of luck, and seized the opportunity to turn this humble food truck into a kitchen churning out delicious ramen. 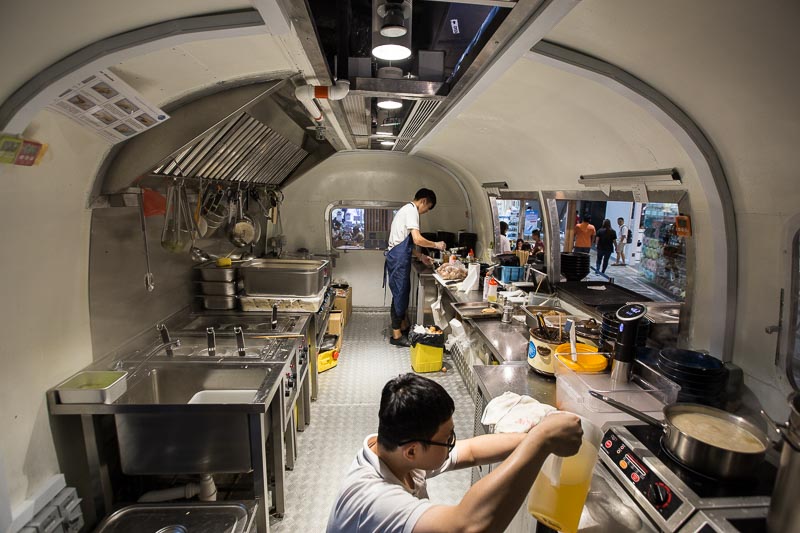 Now, you might think a kitchen in a food truck would be really cramped, but this restaurant proved otherwise. Since batches of broths and other ingredients are sent over from Kanshoku Ramen’s HQ, the kitchen doesn’t require that much space for the heavyweight machinery. Opened by Singaporean businessman Melvin Ang, Kanshoku Ramen has come a long way. Kanshoku translates to 完食, which means to “finish one’s food”, and at this restaurant, the slogan is exactly what they strive for.

With that in mind, I found myself eager to start the meal! 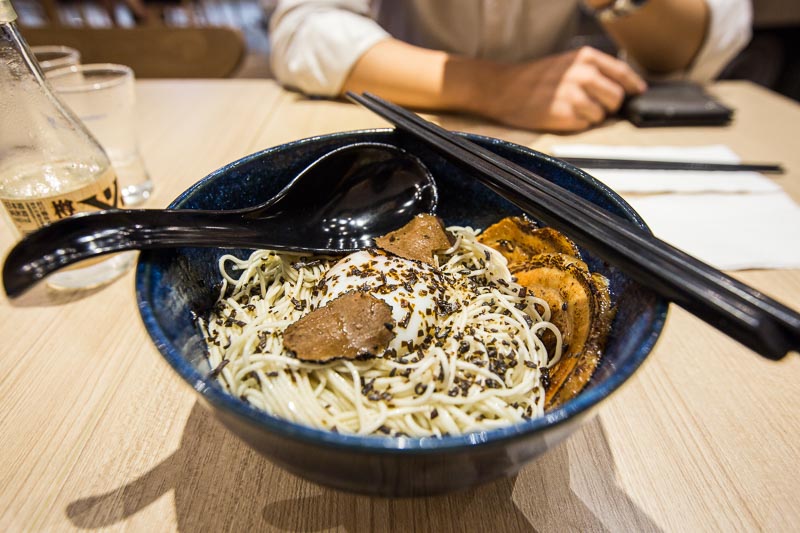 An alluring fragrance of truffles came wafting through the air the moment this bowl of Truffle Ramen Dry ($13.90) landed on my table. Topped with an onsen egg with truffle shavings, I noticed that the chashu slices were evidently darker than usual. 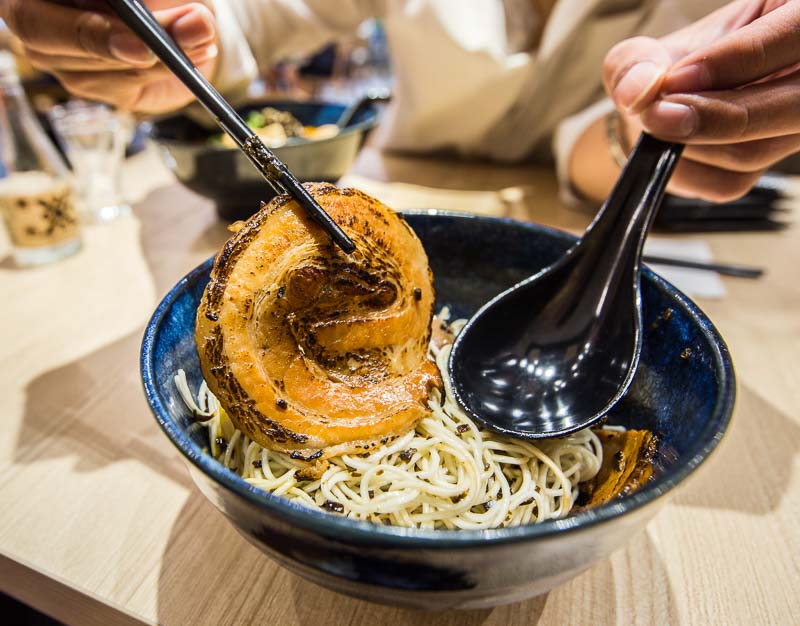 The chashu slices were blow-torched before leaving the kitchen resulting in meat with a prominent charred taste. Although it was a tad dry, it was still full of pork flavour with a thick layer of fat.

What really won me over was the dish’s strong truffle aroma; everything in this dish was infused with truffle, down to every strand of noodle! 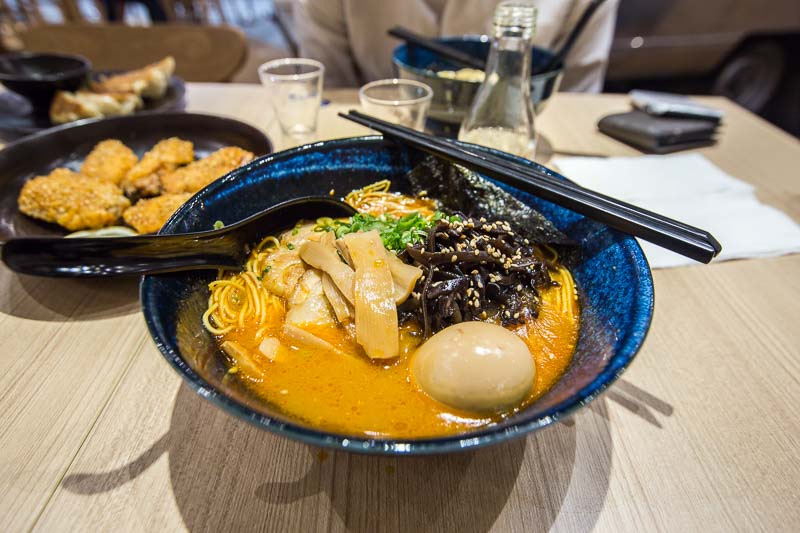 If you’re craving something spicy, why not try the Spicy Tonkotsu Ramen ($14.90)?

I was initially intimidated by the fiery orange colours of the broth, because I could already imagine how it’ll burn going down my throat. 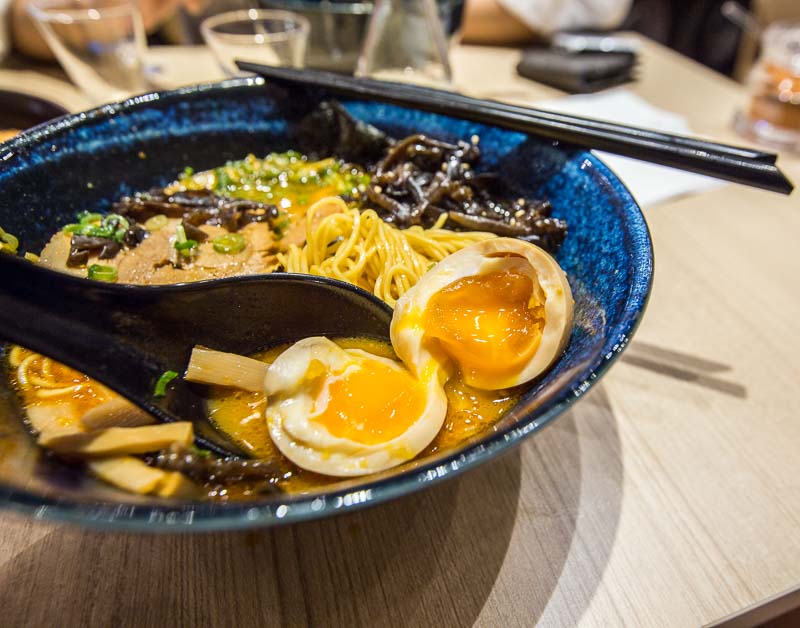 Much to my relief, the broth had a pretty mild spice. The spice does stack up after a couple slurps and becomes marginally spicier, although it’s definitely at a manageable level. Thankfully, it made up for the lack of spice with rich umami goodness.

The Ramen Egg ($2) here was one of the better ones I’ve tried. It had a custard-like texture and added a savoury touch to the dish. I also liked how the chashu slices had soaked up the broth, enhancing its flavours. 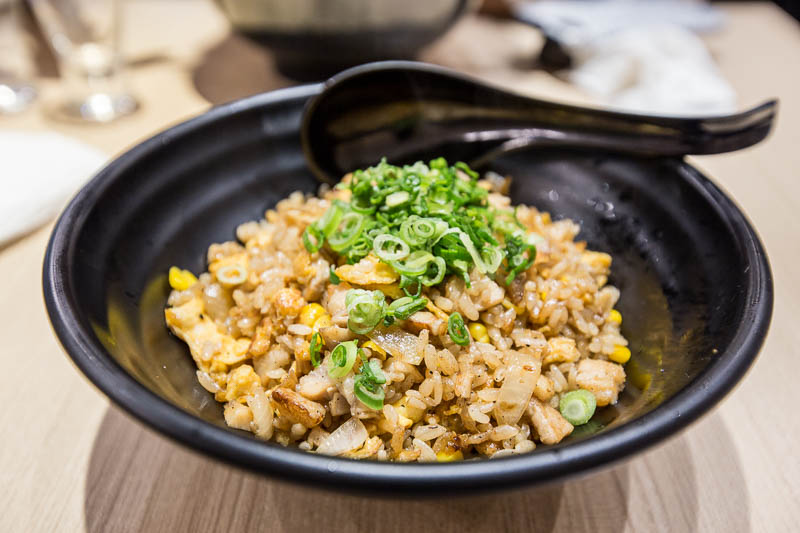 The dish incorporated sushi rice into a mix of corn, egg and pork bits, stir-fried with their in-house blended sauce. 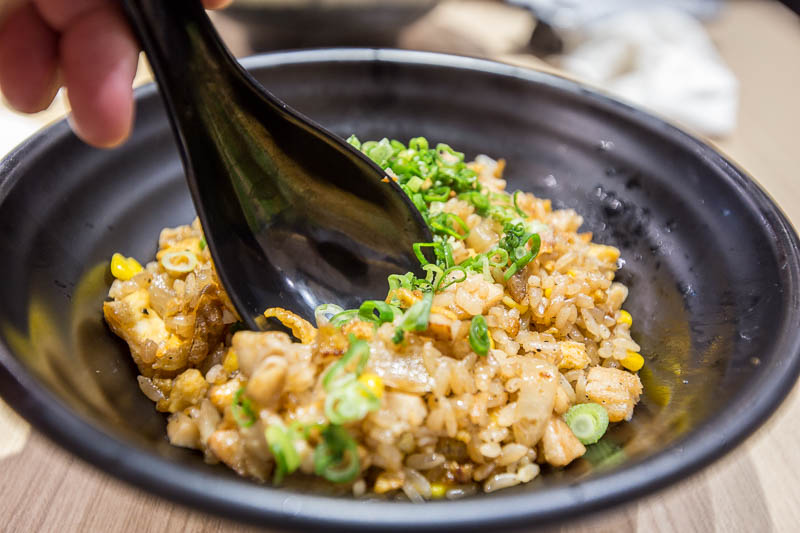 The serving was a little small for me, considering the price. I did like that there was a good amount of pork bits in the rice. Each spoonful had at least two or three pieces of pork. It also wasn’t too oily and tasted pretty light but still filling. 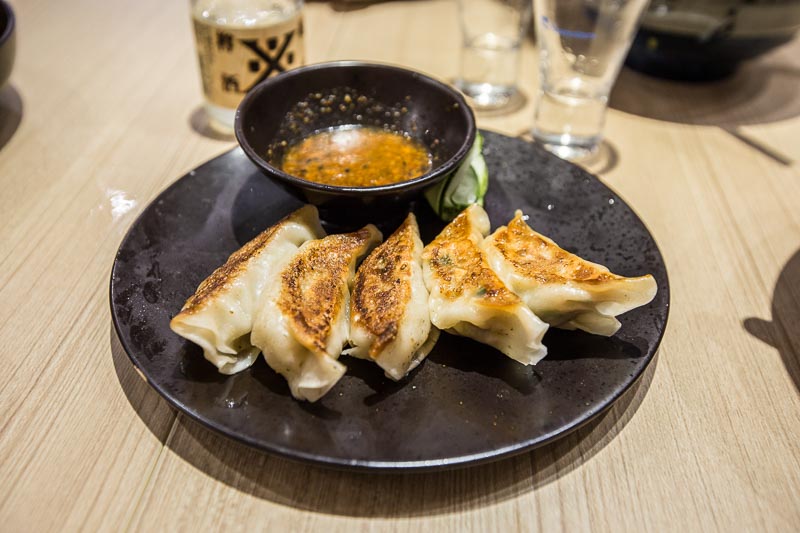 The Pork Gyoza ($6.50) was one of the favourites on the menu, so I simply had to try it. I liked the really crispy skin, which went well with the light yet flavourful filling. Each bite was juicy, with the occasional crunch from a medley of vegetables. 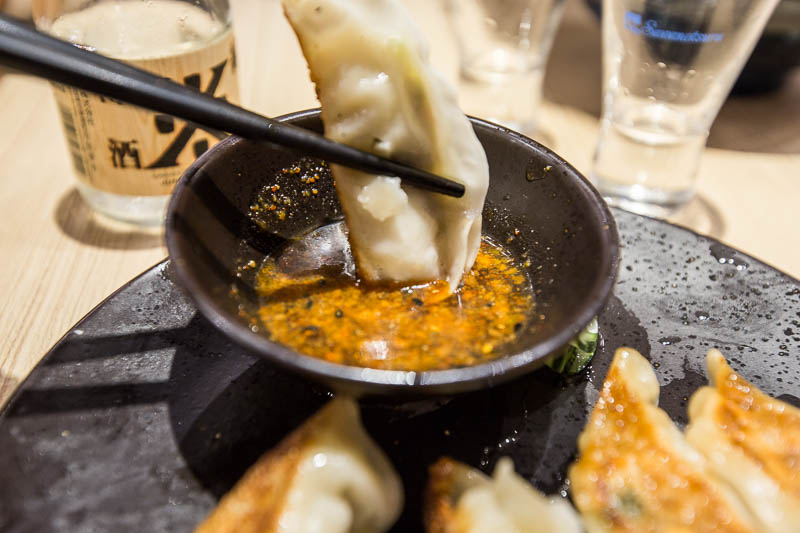 The sauce really pairs well with the gyozas, adding a piquant taste faintly reminiscent of vinegar, but with an added tinge of sweetness. 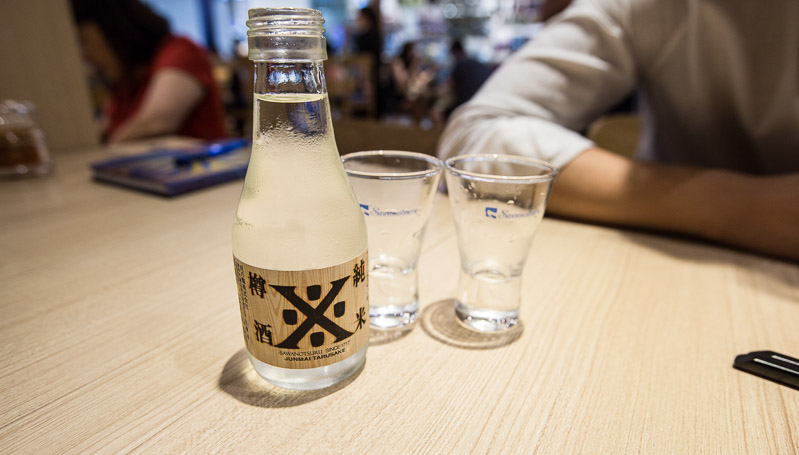 What better way to end a Japanese meal than with sake? We selected a bottle of Sawanotsuru Jumai Taru Sake ($12.90), which Melvin mentioned had a calming effect and warms the stomach to aid in digestion. 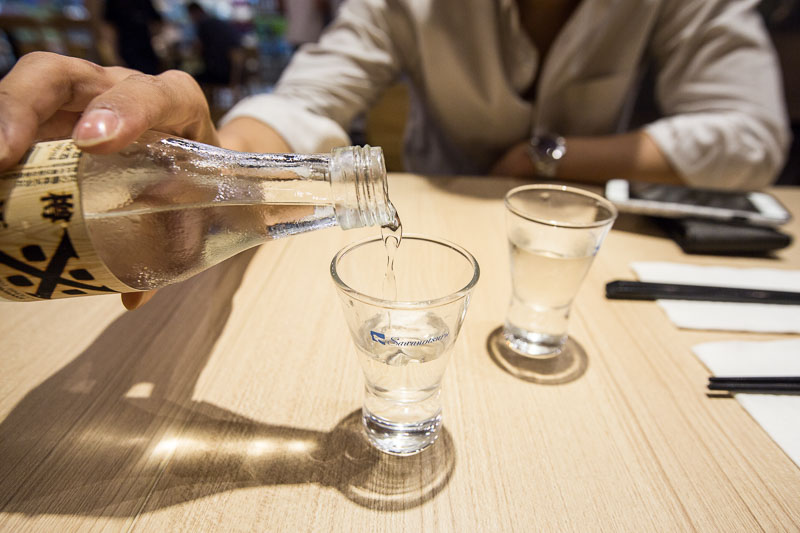 It was drier than I expected but I have to agree with Melvin. It was smooth and light, absolutely perfect after a heavy meal.

Kanshoku Ramen serves up pretty decent bowls of ramen, and I highly recommend you try the Pork Gyozas and the Truffle Ramen. There is another joint at The Metropolis in Buona Vista, though it doesn’t have the food truck. It still has some pretty darn good ramen!