Now that we’re in the thick of Phase 2, many of us are gradually coming out of hiding from our homes and seeking both familiar and new places to dine.

While the world was keeping themselves safe at home, there were some new eating spots that sprouted and Kingdom of Belgians (KOB) is one of those who opened their doors right before the ‘Circuit Breaker’ period. 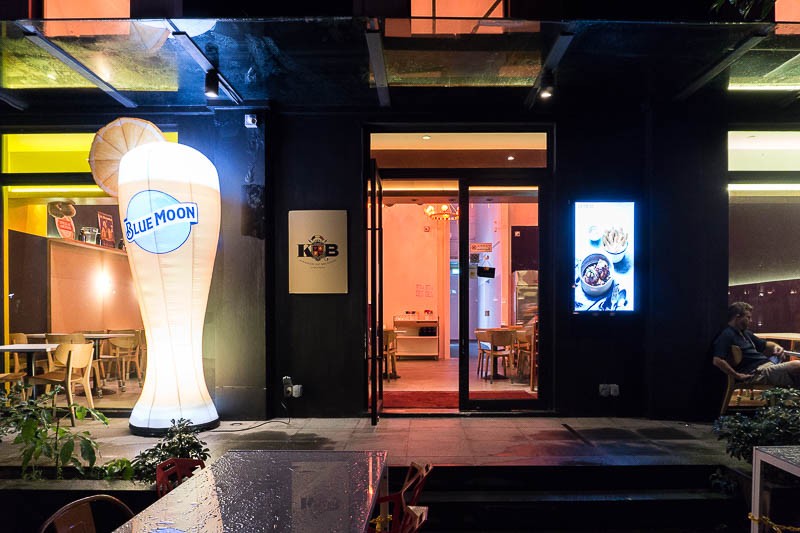 I made my way over on a wet weekday evening, which made the dinner even more comforting as I was seated right by the window. 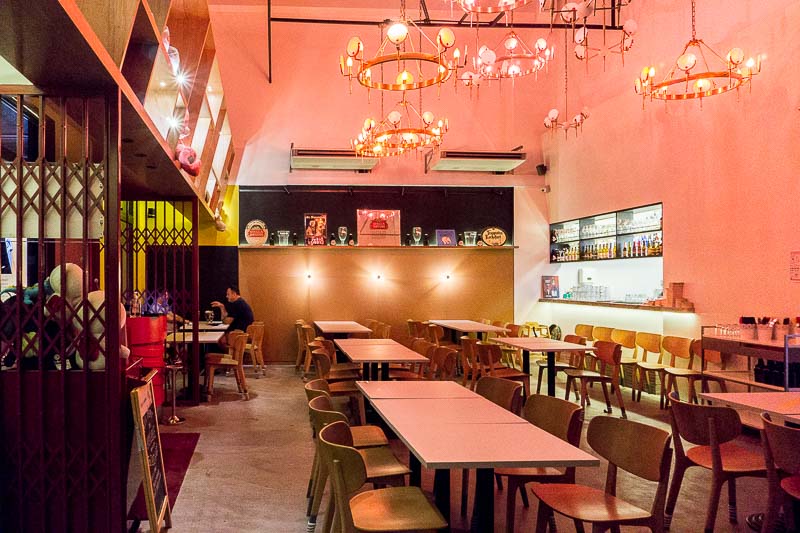 The space indoors features high ceiling and strategically-placed lamps that highlight all three colours of the Belgian flag, as well as an all-black feature wall.

Despite its expansive feel, the warm lighting did well to make Kingdom of Belgians feel cosy, although it certainly made me work doubly hard to take photos of all the delicious food I had. 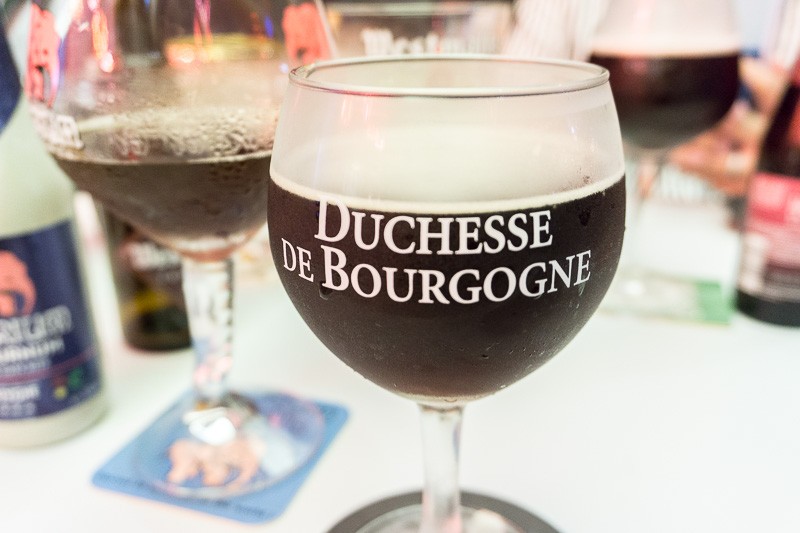 If you’re an avid seeker of craft beer, their beer list will have you more than elated. This Duchesse de Bourgogne (S$14) is a one-of-a-kind Flanders red ale-style beer, produced by Brouwerij Verhaeghe in Vichte, Belgium.

The ale is matured in oak barrels for 18 months, giving it a complex aroma and deep, dark flavours of roasted malt, with only the slightest bitter finish. It’s also mildly creamy.

I was surprised by how much I enjoyed this beer, given that I’m usually a boring IPA kinda gal. 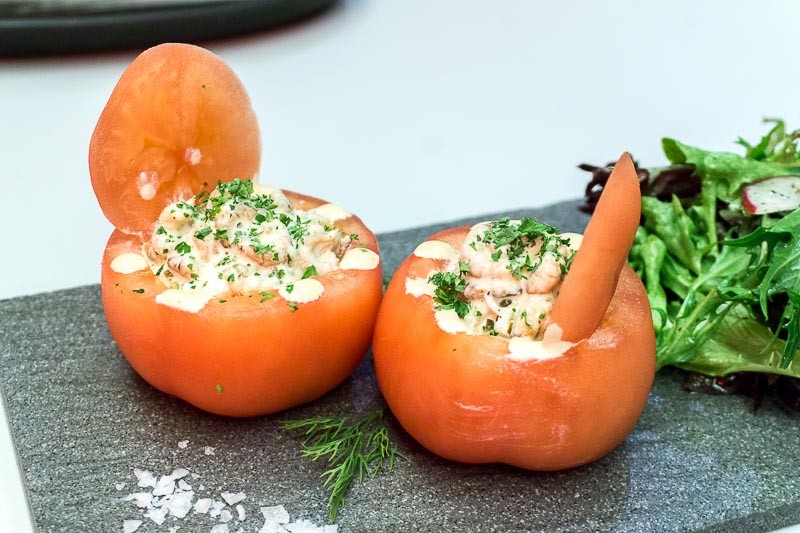 As the dishes came and went, I realised what I loved most about it was that they didn’t pretend to be fancy or impressive; they were mostly straightforward, accessible flavours that hit me in all the right places of my gut. Take their simple Tomate Crevette (S$22), for example.

This dish consists of North Sea shrimps tossed in homemade cocktail sauce and served in a carved out tomato; it was like enjoying a hassle-free shrimp cocktail, except these tiny shrimps were exceptionally sweeter and smaller. They are are also hand-peeled, which was a fun fact to digest while my dining partner and I wolfed down this appetiser effortlessly. 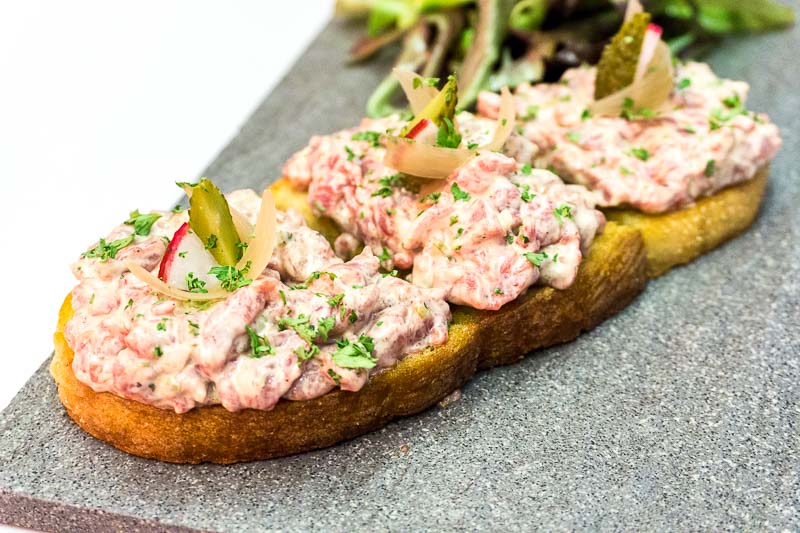 Prefer a meat-based starter? Then their intimidatingly named Toast Cannibal (S$14) should fit your criteria better, with beef tartare, capers, gherkins, with shallot and parsley on a sourdough toast.

The contrasting texture of the smooth, chewy tartare to the crusty sourdough toast felt amazing, and since this beef tartare presentation has no raw egg, it was easier to stomach than many others I’d tasted before. The tiny touch of gherkin was ample enough to create a pop of acid to complement the richness of the beef tartare, as well. 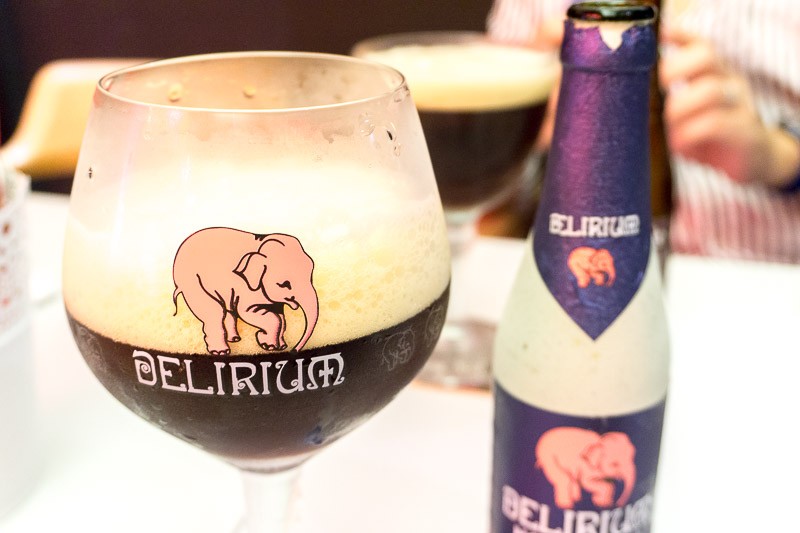 Don’t be fooled by the Delirium Nocturnum’s (S$24) letterings, as, at a glance, it might trick you to think it’s a Thai product (especially with its pink elephant symbol). At 8.5% ABV, it’s a strong one, so you definitely will want to nurse this a little longer than your usual pint.

However, what I truly enjoyed about this dark ale was its potent cocoa notes that are balanced with a thick, creamy head. It carried essences of sweet fruit, roasted malt, and hops, which were also complemented by lashings of toffee, berry, and spice.

I was so impressed by this that I asked where I could purchase it in retail, and so far a quick Google search only led me to this. 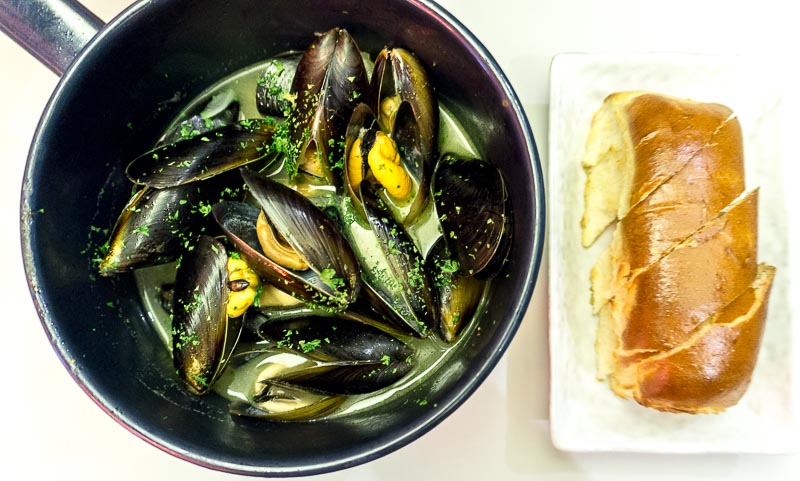 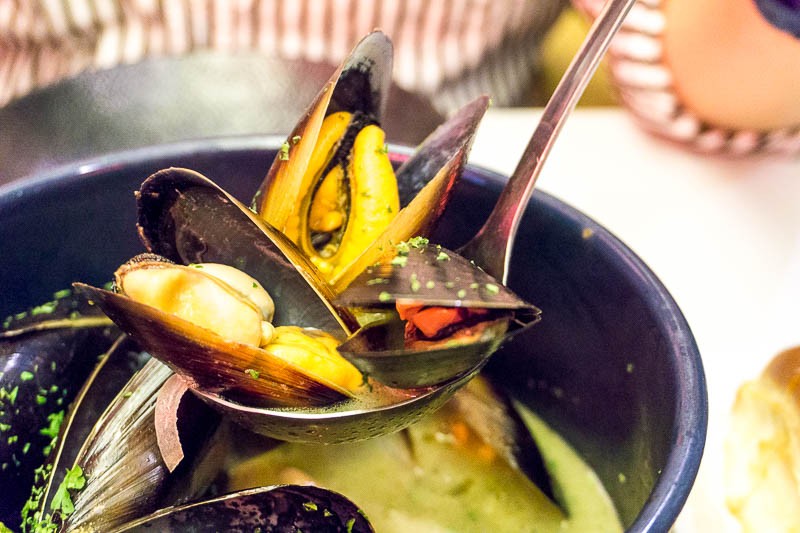 I usually can’t stay away from a savoury mussel-in-broth bucket, but the Moules (S$24 as a Starter, S$38 as a Main) here at Kingdom of Belgians are distinctly different. After asking what the ingredients for the broth are, I deduced on my own that the white wine they use is dry and sharp, which translated to a bitter broth.

I wouldn’t say it’s a bad thing, but it will definitely take some getting used to. The mussels themselves, however, were impeccably juicy and plump, and Kingdom of Belgians also offer other broth choices to pair with the mussels, so I say give them a shot! 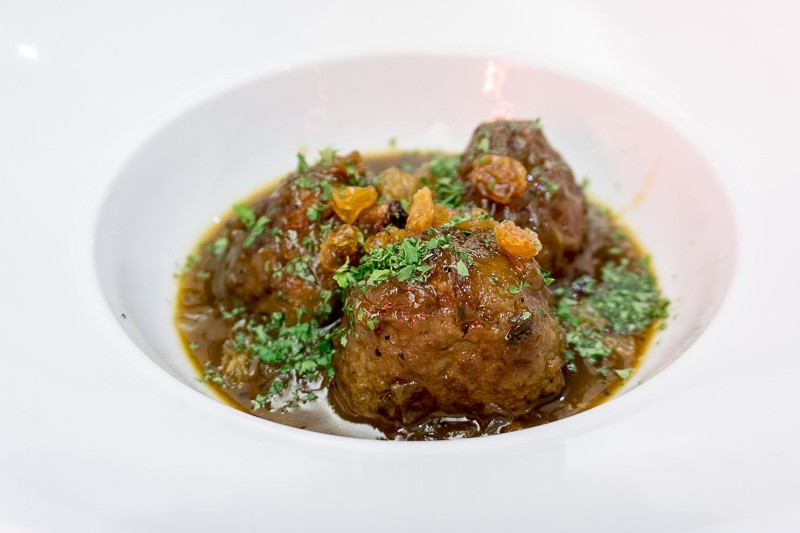 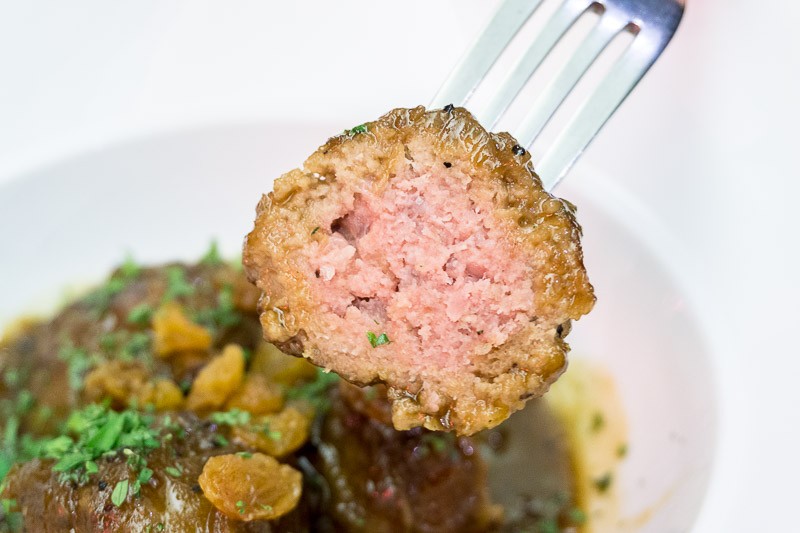 I have to commend their Boulet Liegeois (S$24), which is a single serving of braised pork-beef meatballs cooked with shallots, raisins and beef jus. As my dining partner doesn’t consume pork, Kingdom of Belgians was kind enough to swap out the beef-pork meatballs for purely beef meatballs.

However, it certainly didn’t take away the beauty of the sauce it’s cooked in. The meatballs soaked up the sweetness and were insanely tender; we didn’t require any knife or fork to break them apart. 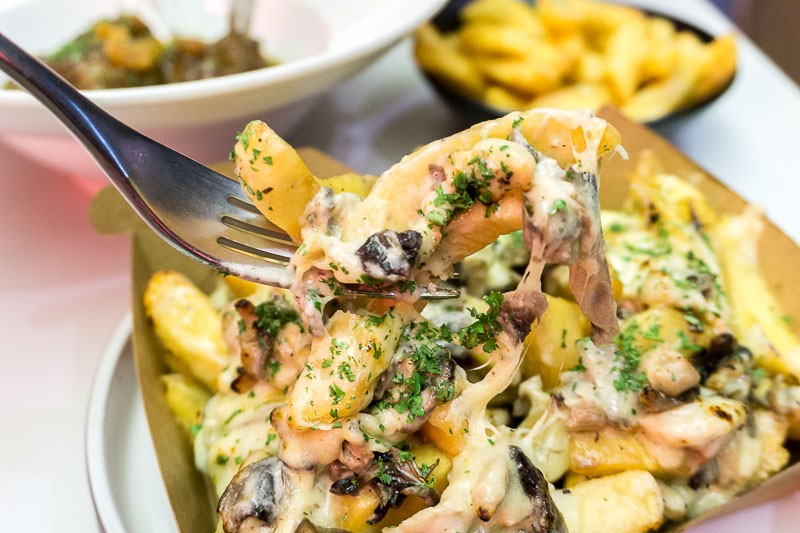 The highlight of the evening was Farmer Jo (S$16). It’s like a decadent pub grub staple that anyone can enjoy. Pair this with any one of the beers from Kingdom of Belgians, and you’ve got the makings of an easy Sunday brunch.

You can choose to have this dish with either fries or waffles, but I reckon fries would work better. The roasted chicken was smoky and the cheese—although I didn’t ask what type it was—had an edge of bitterness and pungency that made this dish gratifyingly complex (and not just simply cheesy). 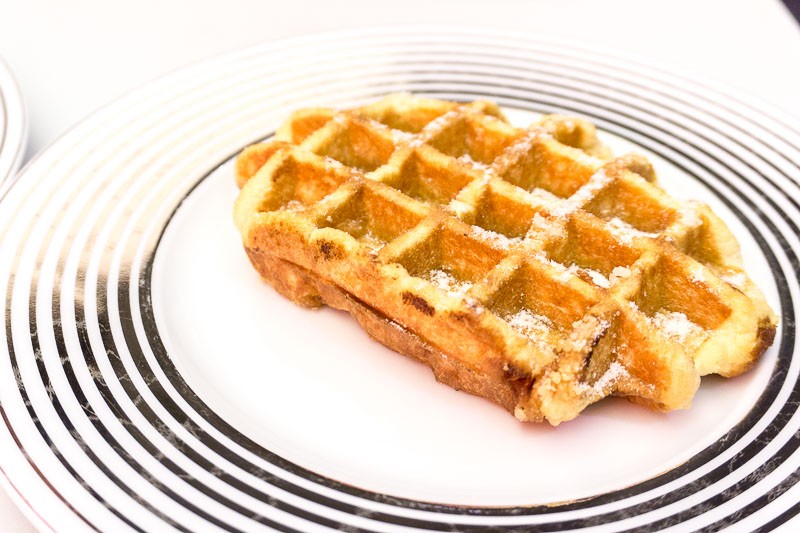 If you still have sufficient room for a small bite of dessert, my pick would be their Liege Waffle (S$6), plated and presented simply with icing sugar. Don’t expect the waffle to be crispy; this one was mildly chewy and denser than what you’d anticipate, but that made it a lot more satisfactory to chew on, given that it’s only served with icing sugar.

Because it wasn’t a fussy dessert, it didn’t prove to be cloying or push me beyond satiated.

The Kingdom of Belgians’ name may sound daunting at first, but peruse the menu and you’ll quickly realise its approach is friendly. The food is embellished but downright delicious and you’ll want to pair your meal with their wide array of craft beers—I highly implore you to do so.