Omakase (お任せ) seems to be the rage these days in Singapore with countless establishments offering them – prices can vary from $60 to a couple of hundreds. Omakase means “I will leave it to you” in Japanese.

Essentially entrusting the chef to decide the tasting menu based on the freshest ingredients on hand and creating a memorable dining experience for the customer. Think of it as a degustation menu, just without the menu and Japanese style (So be wary when you get offered an Omakase menu at a chain restaurant in Singapore. It’s a trap!).

Koji Sushi Bar is the latest venture by the team behind Shunjuu Izakaya and the recently shut Satsuma Shochu Dining Bar. Koji (糀) symbolizes alcohol and a place to wine, dine, and enjoy. 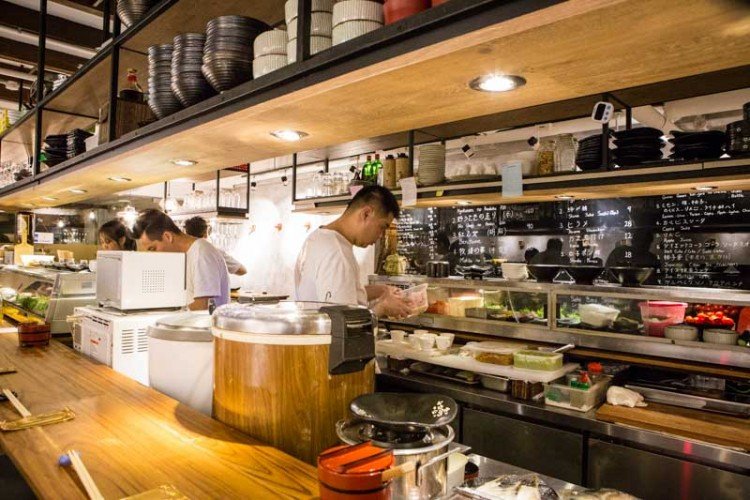 Holding true to the Japanese philoshopy of space efficiency, Koji maximises all available space in this tiny shop lot – Small Space, Big Style. Seating 20 diners in high chairs around a centre island kitchen (Yes, everything is prepared right in front of you!), this modern Japanese joint serves up Nigiri Sushi (握り寿司) sets of 5, wide selection of Donburis (丼) with Hokkaido rice – an unpolished rice option is also available, ala-carte options and of course the dinner omakase selection (starts from $68++)For the omakase selection, advanced notice is required due to the limited seats– preferably more than 24 hours ahead.

We’ll be trying the 11 course omakase set today ($85++ option), and presenting what we ate for you to decide whether its worth it. Of course as with all omakases, items will vary every day. The higher priced option will see better quality dishes, and sometimes 1 or 2 more courses. 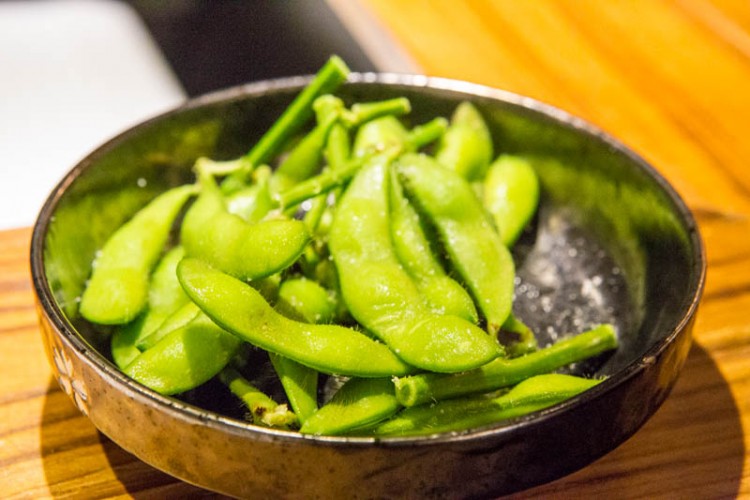 Edamame. A popular side in most izakayas (居酒屋), Koji offers a selection of Japanese Sakes, Shochus & Beers as well with this lightly salted snack. 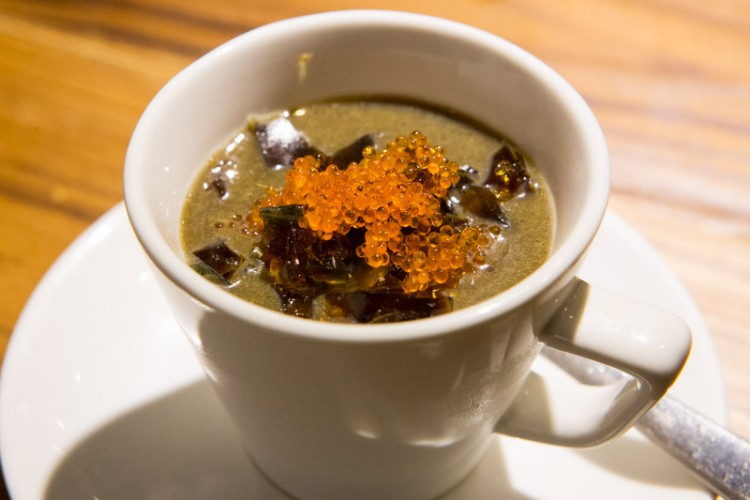 From left: Hamachi with Black truffle, Mozuku Seaweed in Yuzu Sauce, and White Fungus with Seaweed and Goma Sesame Sauce. The truffle added a very subtle tinge to the savoury fatty pink hamachi. Mozuku seaweed (from Okinawa) is often served as a palate refresher in Japan, it has a smooth and chewy texture compared to other species of seaweed. The white fungus was really crunchy and there were hidden cubes of crunchy fish roe. 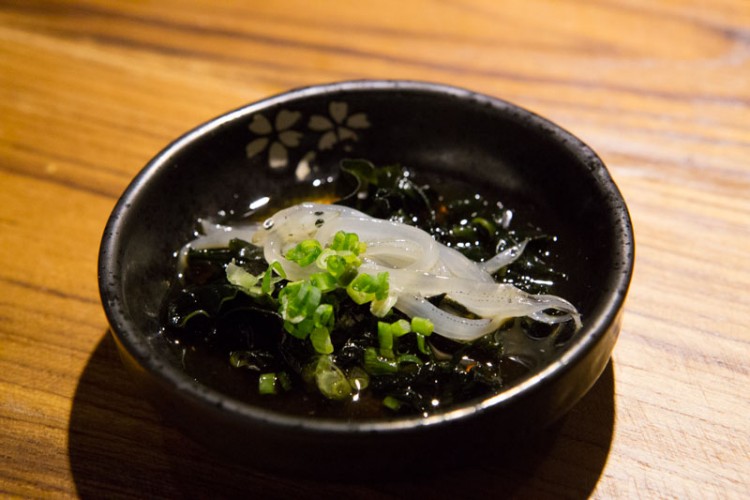 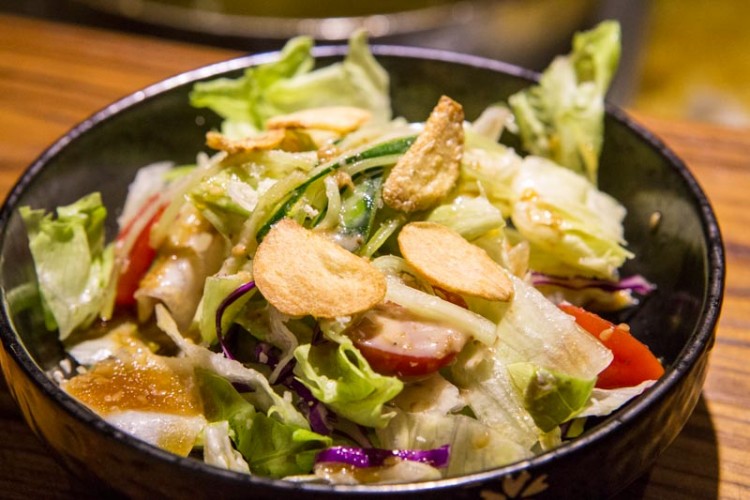 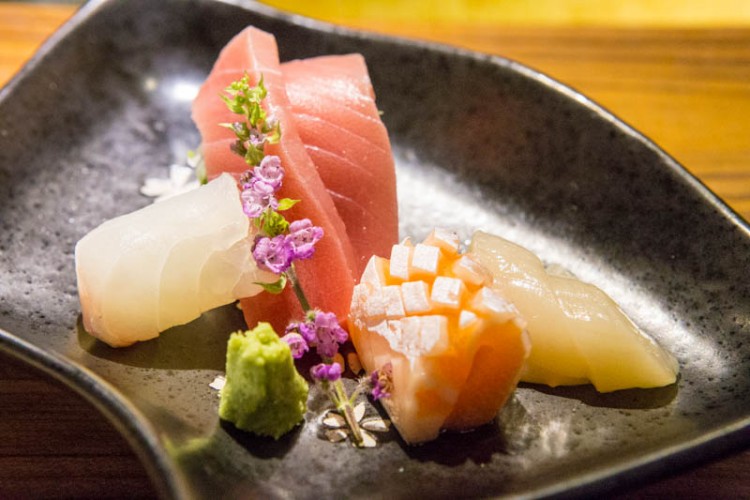 Assorted Sashimi. Next up was a platter of assorted sashimi, including Tai (Sea Bream), Sake Toro (Salmon Belly), Chūtoro (Tuna Belly), & Hotate (Scallops). The Chutoro was melt in your mouth good, the fatty bits just oozing with every chew. Did you know most Japanese eateries only have 2 shipments of fresh seafood from Japan every week whereas Koji Sushi Bar has it 3 times; so expect the freshest and best cuts when you stop by for a meal. Toro Tataki Maki. Made from toro near the belly region, there is a slightly fattiness to the tataki but not overwhelming. Severed with tempura flakes for added crunch. 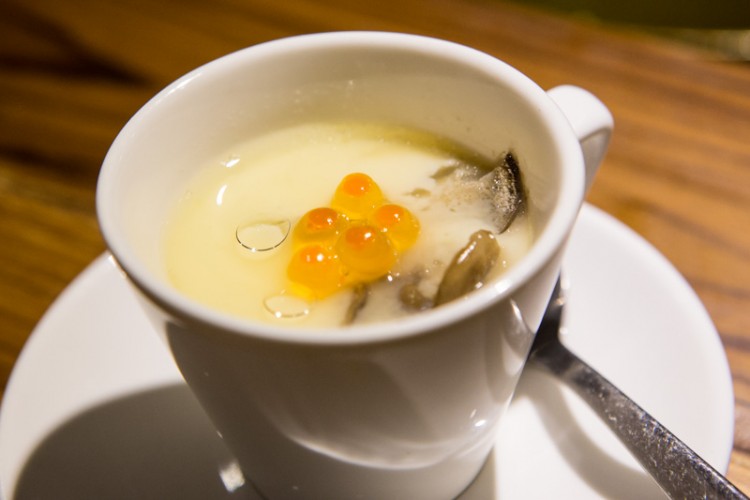 Chawanmushi with Truffle Oil. The egg custard was impeccable with a  soft, quivering texture which glides down the throat. Truffle oil somehow goes very well with eggs, regardless whether it’s fried, baked, steam, etc; enhancing the overall flavour of the dish. 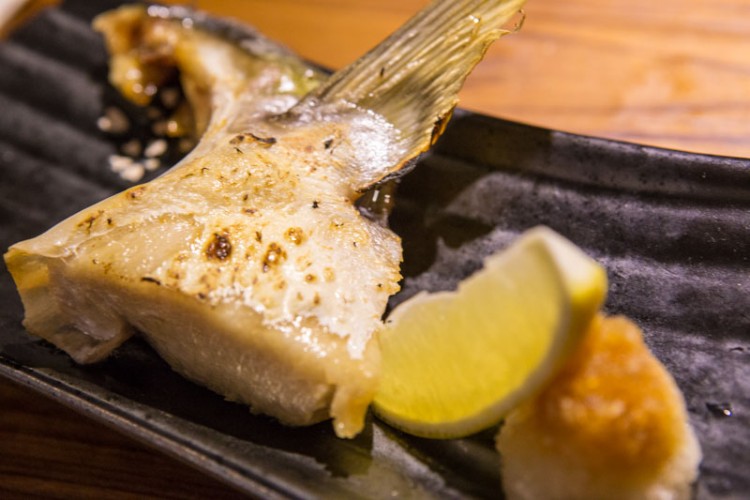 Hamachi Kama (Yellowtail Collar). I have been to several sushi joints in Japan where this is an off menu item and is often served to regular patrons and not any random paying customer (we are really spoilt in Singapore!). It’s definitely one of the better parts of the fish, better than the raw sashimi slices in my book. The meat is sweet, delicate, flavourful and rendered from the fish’s own fat and juices. 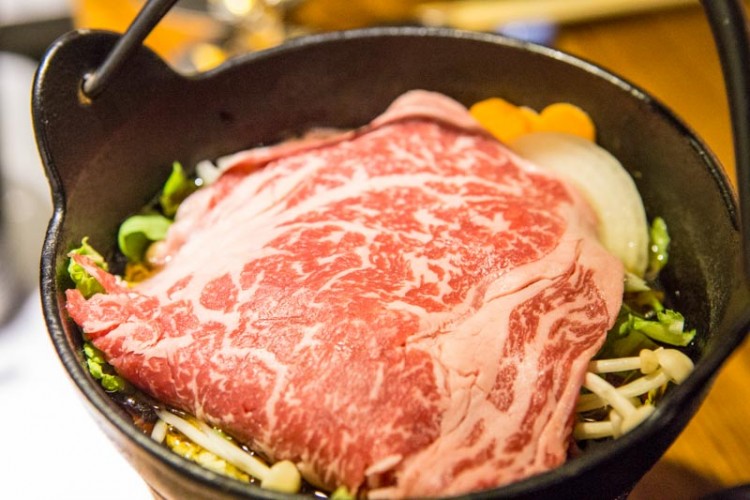 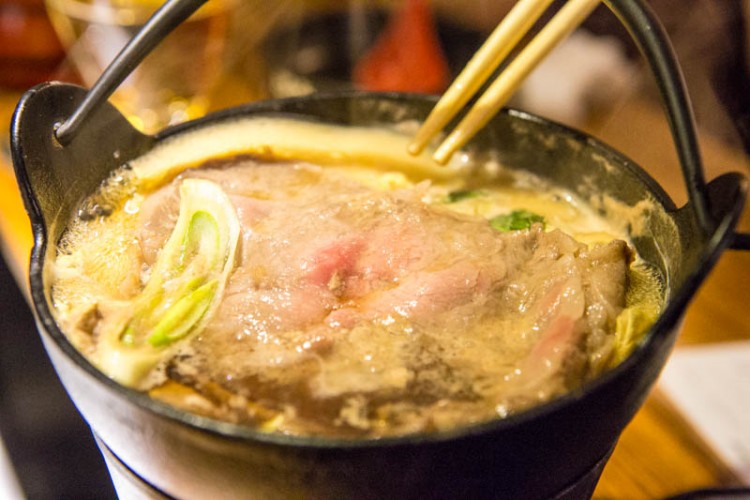 Wagyu Beef Sukiyaki Nabemono. Just as we thought we were almost done with our 11-course omakase dinner, we were surprised with a hotspot of sliced wagyu beef which was so nice and fatty! The rich dashi broth was so good that I drank it all. Onsen tamago. No hot springs in Singapore (Ok. There’s one in Sembawang and one on Pulau Tekong), Japanese restaurants make do with cooking the eggs in warm water. The cold, smooth egg with its silky runny yolk served with dashi soya sauce was delicious. Asian Clam in Dashi Stock. Back to basics to cleanse the palate, a simple dashi stock and a single fat and very juicy Asian clam (Chinese restaurants will normally call this prosperity clam). The clam was slow cooked in the warm stock retaining its sweet flavours and not scalding the flesh. Assorted Nigiri Sushi. The highlight of the evening finally makes its appearance. A platter of assorted sushi featuring Saba (Mackerel), Kampachi (Amberjack), Sanma (Mackerel Pike), Sake Toro (Salmon Belly), & Uni (Sea Urchin). The saba was good albeit very fishy (even with the ginger). The fresh uni was sweet, creamy and plump which is always a delight to savour. 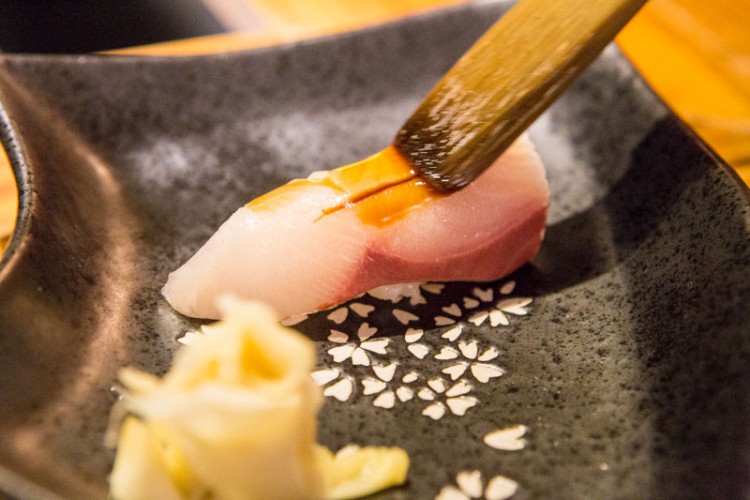 Most of us will be accustomed to sandwiching the sushi with the chopsticks and soaking the rice in soya sauce – wrong way my friends! The correct way is roll the sushi onto its side, picking it up on both ends and dipping the fish side in soya sauce. Koji Sushi Bar has made it even easier. Everyone “paints” their sushi with soya sauce instead and it’s best enjoyed eating with your hands (that’s how it’s traditionally eaten in Japan). 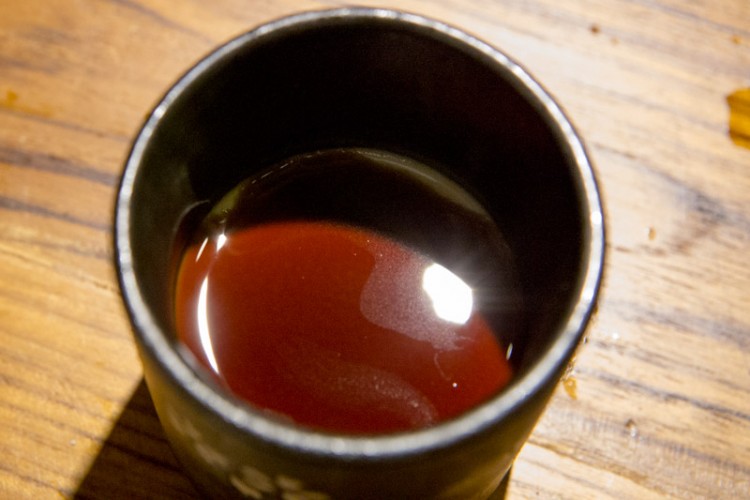 Soy Bean Panna Cotta with Okinawa Black Sugar. I’m not a fan of milk substitutes in desserts but I was impressed with this soy based panna cotta – there was vaguely any soy after taste. The black sugar was somewhat like gula melaka but smoother and more refined. A very neutral dessert to end of a multiple course meal.

Koji Sushi Bar is the place to get your fix of sushi and sashimi. Its reasonably priced sushi sets or dons are far superior in quality to the mass market Japanese chains (Sakae Sushi/Sushi Teh) and cheaper to a certain degree. Or pamper your date to an Omakase meal, at $68++ or $85++ you will have a 10/11 course meal with the freshest ingredients. Rest assured you won’t be disappointed, maybe with you bulging waistline.