Lucky for you Easties, Upper East Coast area has many good food choices. I recently took a stroll along East Coast Road and came across Kota88.

Initially, I thought it was just another bar amongst the rest around the area. But I soon noticed that they actually serve authentic Indonesian-Chinese cuisine. 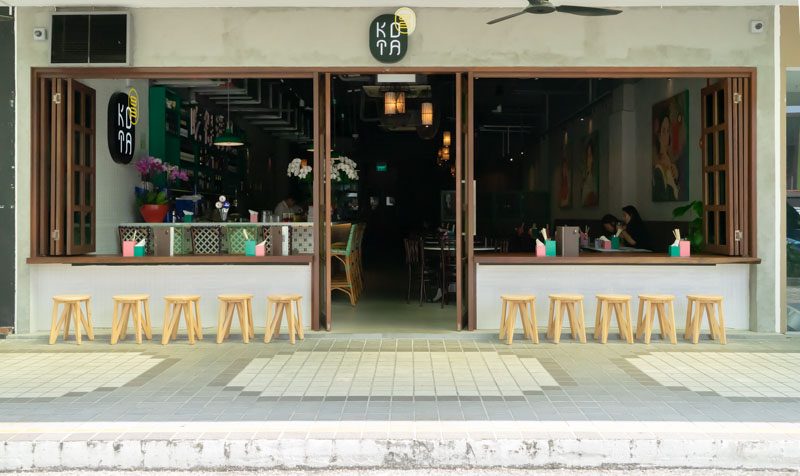 Kota88 is located right below Springvale, and caters to the taste buds of Chinese Indonesians living in the area. The dishes they offer are rather authentic, and their goal is to bring familiarity and comfort. 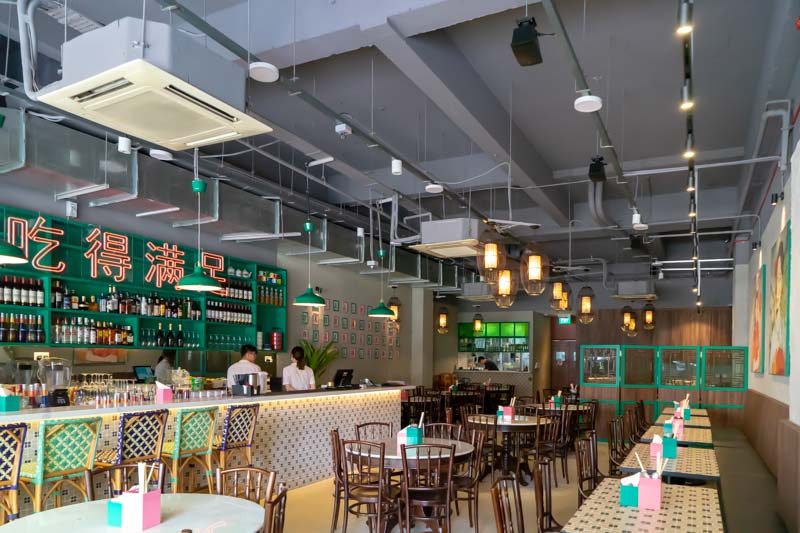 The round marble and checkered tables and traditional wooden seatings bring back nostalgia for the older customers.  Yet at the same time, the bright colours would appeal to the younger crowd at night.

It was comfortable and felt like I was having dinner back at home with my family. Kota88’s signature dish is the Nasi Campur Babi (S$12.88++), which came with a generous portion of fragrant chicken rice. 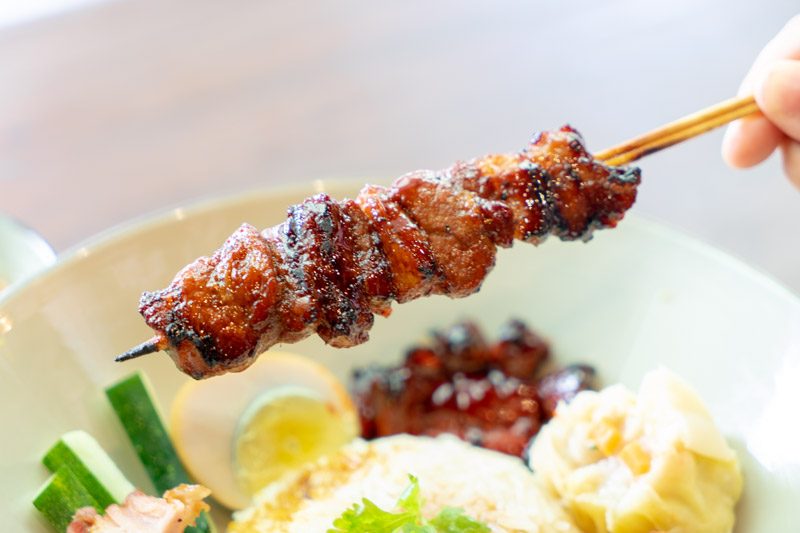 The fragrant chicken rice complemented the sweetness of the pork and balanced out the smoky flavour of the BBQ meat.

The star of the Nasi Campur Babi has to be the sweet pork satay. Marinated in sweet sauce and grilled to perfection, the tender meat came off the stick easily and didn’t have too much fat. This dish is definitely a must try when you’re at Kota88. Another one dish we tried at Kota88 is the Ikan Goreng Saus Padang (S$48.88++). Deep-fried to crispiness, the fish was definitely large enough to share among a family of four to five.

The vibrant colours from the peppers and spring onions made this dish look very enticing. 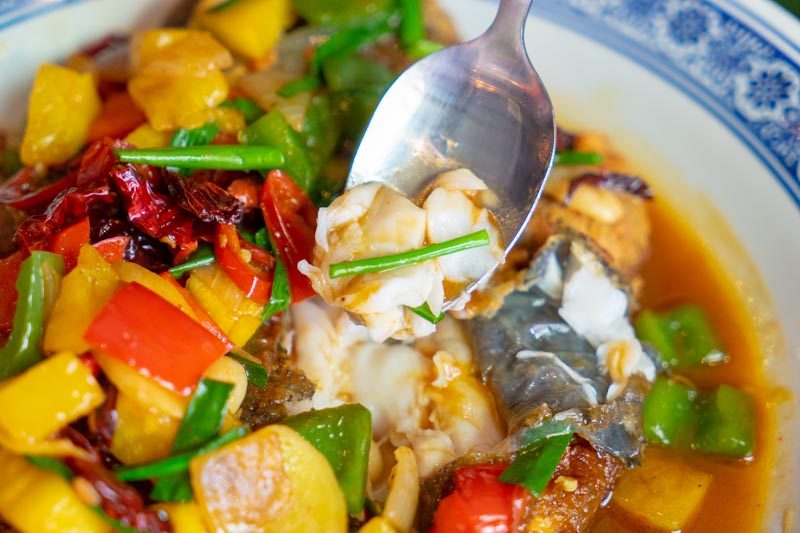 The fish broke apart easily when we sliced into it, and the flesh was fresh and succulent.

Accompanied by the various peppers and padang sauce, the dish burst with sweet, sour, savoury and slightly spicy flavours. It definitely got my attention, and it’s no doubt my favourite dish at Kota88. 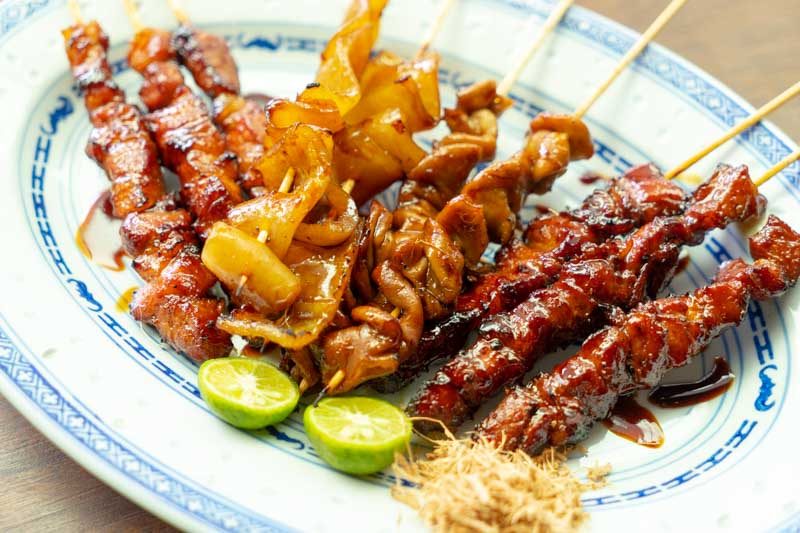 If you’re looking for something to share, the Sate Babi (S$15.88/10 sticks) wouldn’t disappoint. You can also choose pork intestine or pork skin instead of regular pork satay. But if you’re not a fan of offals, stick to the regular satay.

The meat chunks were tender and coated with a layer of sweet soy sauce, which I thought were a tad salty. Squeeze the lime to help cut through the flavours with its citrusy tang.

People tend to order the Sup Baikut (S$15.88++) after having a plate of satay. Like a soup made with love at home, this pork ribs soup gives you just the right amount of comfort. The pork ribs were tender, and came off the bone easily.

Despite containing preserved vegetables, the soup wasn’t as salty as expected. And after having sticks of strong-flavoured satays, this light-flavoured soup helped to wash it down. 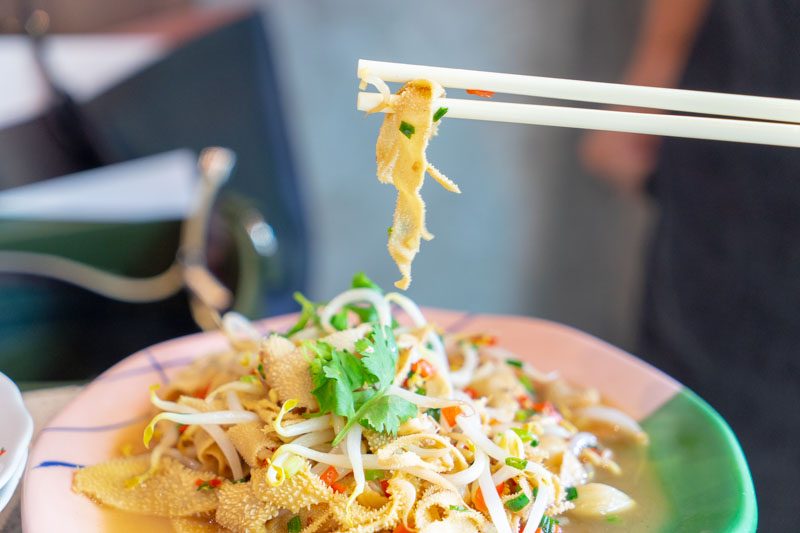 This dish isn’t something I would usually order, so at first, I was sceptical. But I have to say, the Babat Jarit Cah Tauge (S$17.88++) surprised me pleasantly.

The beef tripe wasn’t gamey at all, and the slightly tangy seasoning helped to cover its strong taste. The bean sprouts added a crunch to each mouthful and it was indeed refreshing. We couldn’t stop ourselves from finishing the dish within minutes. 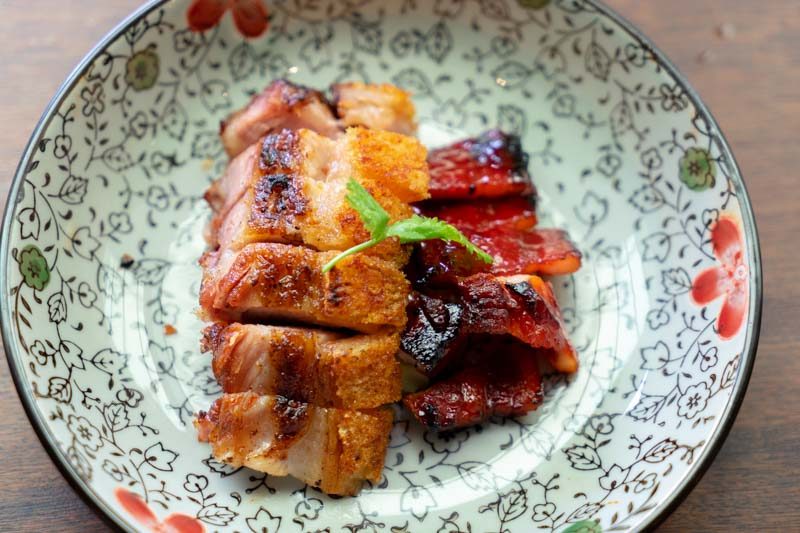 You would think that there’s nothing special about this plate of Cha Sio & Sio Bak (S$8.88++/100g), but we definitely were wrong. Carefully prepared by Chef Ben with 40 years of experience, this dish was fantastic.

The crispy Sio Bak (roasted pork) skin let out a resounding crunch as I bit into it, contrasting with layers of soft and tender meat — you truly need skills to achieve this consistency.

The sweet Cha Sio (BBQ pork), on the other hand, was quite fatty but wasn’t too overwhelming. Wanting to infuse local flavours into their cocktails, Kota88 has created the Chendol Cocktail (S$11.88++) — exactly like the dessert, but with a splash alcohol.

It tasted creamy, permeated with strong a coconut fragrance. We enjoyed nibbling on the green jelly and the various ingredients in it too. If you’re someone who loves sweet alcohol, this cocktail would be the perfect choice for you.

Kota88 is relatively new, thus they might take a bit of time to settle with the items on their menu. But even so, their dishes and cocktails that we’ve tried never fail to impress.

Head over for an after-work drinking session and wind down with authentic Indo-Chinese food. Enjoy A Disney-Themed Street Light Up & Christmas Food Village Along...