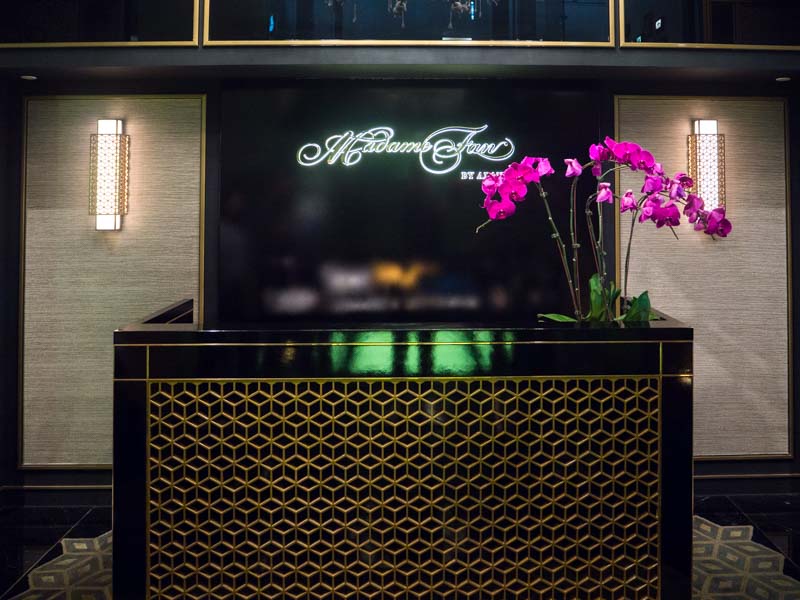 Housed in The NCO Club along Beach Road, Madame Fan brings Alan Yau’s playful vision of Chinese fine-dining to life, and has already been raking in rave reviews. 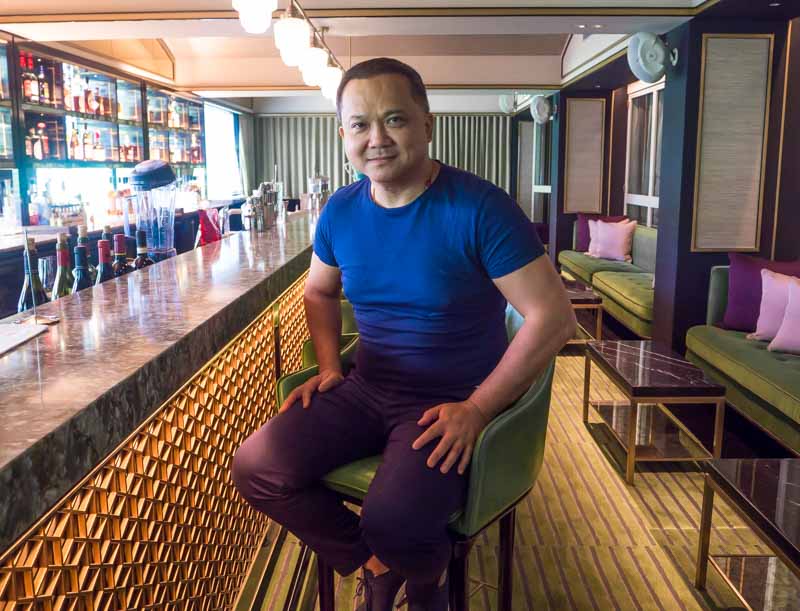 Who’s Alan Yau? He’s none other than the founder of the renowned UK-based Wagamama chain, including Michelin-starred award-winning Hakkasan!

Just our luck, he happened to be vacationing in Singapore when we visited and we were able to meet the man in person. No kidding, I was starstruck.

Back in the day, non-commissioned officers would gather at The NCO Club to enjoy $0.50 beer. While you’re unlikely to enjoy this same privilege now, the heritage building has been transformed into a luxury lifestyle destination with four unique dining concepts, one of which is Madame Fan. 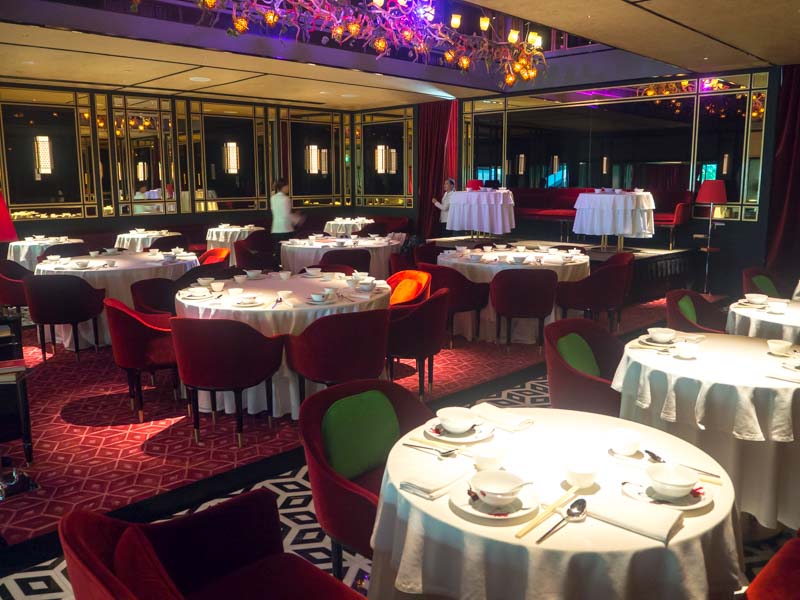 Step into the main dining area decked in vintage red furniture and you’ll feel like you’ve been invited to one of Jay Gatsby’s extravagant parties.

At night, the place becomes a little more chic with a DJ spinning tunes and children above 12 years policy so guests can enjoy a relaxing and romantic evening. Our meal started off with Madame Fan’s signature dim sum dishes. I just adored the Scallop Shumai ($18++), which had a thin dumpling skin and was topped with ikura that added brininess to every bite. For something more unusual, get the signature Mooli Puff ($8++). Each piece had thin, flaky pastry that was surprisingly not too oily, and cracked heavenly with every bite. Break it open and you’ll find the puff filled with julienned radish filling. It was moist and undercut the denser pastry shell, so the puffs didn’t have the expected cloying sensation. While char siu bao can be found at any dim sum restaurant in Singapore, Madame Fan’s Char Siu Bun ($8++) deserves a special mention. My compliments to the chef, because the fluffy, pillowy bao skin was quite possibly one of the softest I’ve ever had. There was also a good ratio of savoury filling, which had thick char siu slices that made me feel like I really got my money’s worth. 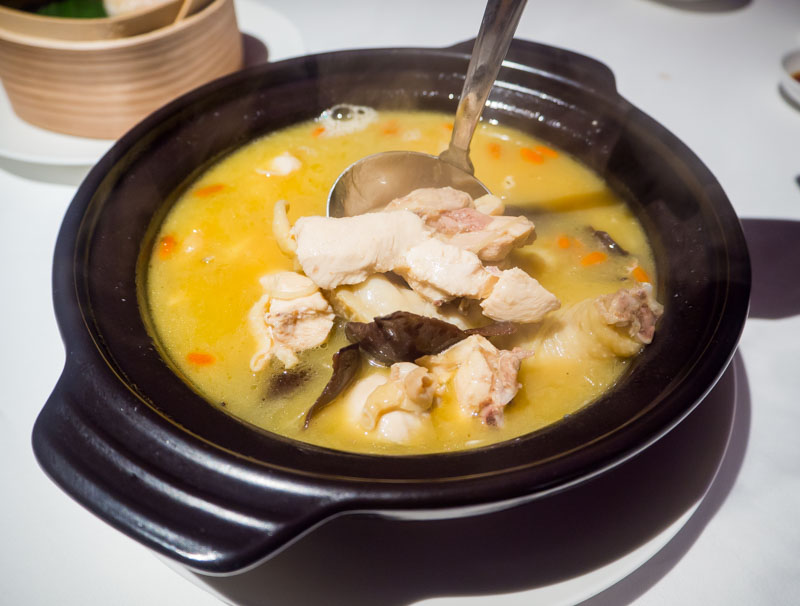 Whenever I eat at Chinese restaurants with my family, ordering a soup is always a staple.

As far as soup goes, Madame Fan’s Drunken Chicken Soup ($36++) infused with 20-year Gu Yue Long Shan rice wine is definitely worth a try, and is also well-portioned for a family of around four to six people. Every spoonful was rich in flavour, while the wine infusion added a robust but hearty kick to the dish. My favourite part was the goji berries; little packets of sweetness that perked up the broth.

It was also brimming with chunks of chicken, so you won’t have to fight over who gets the meat in the soup! 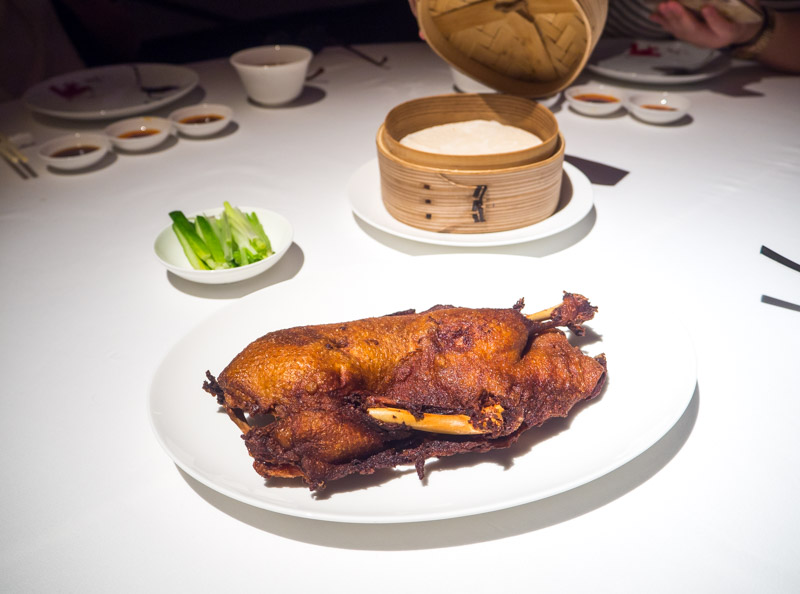 Finally, we got to Madame Fan’s famous Crispy Aromatic Duck ($38++). One would be quick to label this as peking duck, but don’t be mistaken. The duck is marinated for 17 hours before being confit (as typical of French cuisine), instead of the usual roasting.

Considering the hype surrounding this dish, I was just a little disappointed. The duck meat wasn’t as tender and moist as I would have liked, but I must admit that the thin crispy skin definitely lived up to its name. The duck was also adequately fatty, and permeated a strong flavour throughout. 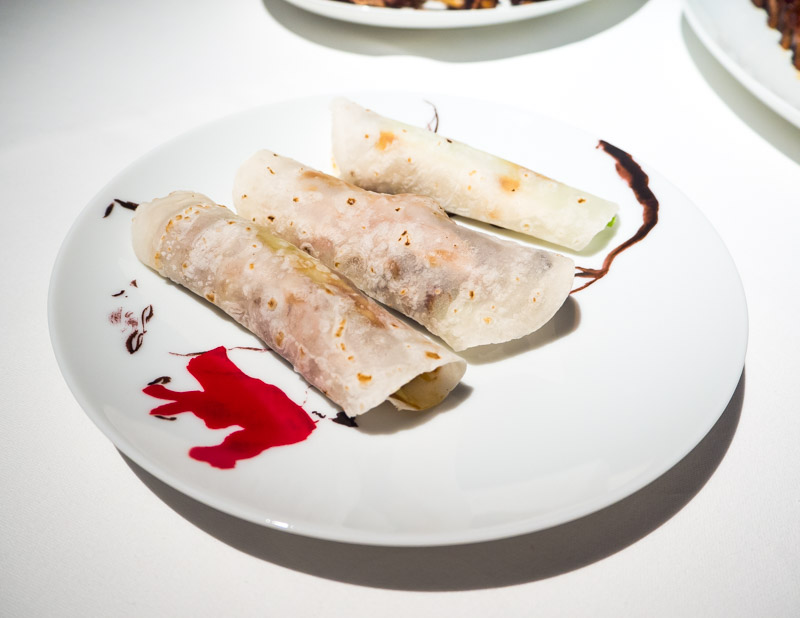 While the cooking style is different, the dish is eaten similar to peking duck, with shreds of duck meat wrapped within a thin pancake. 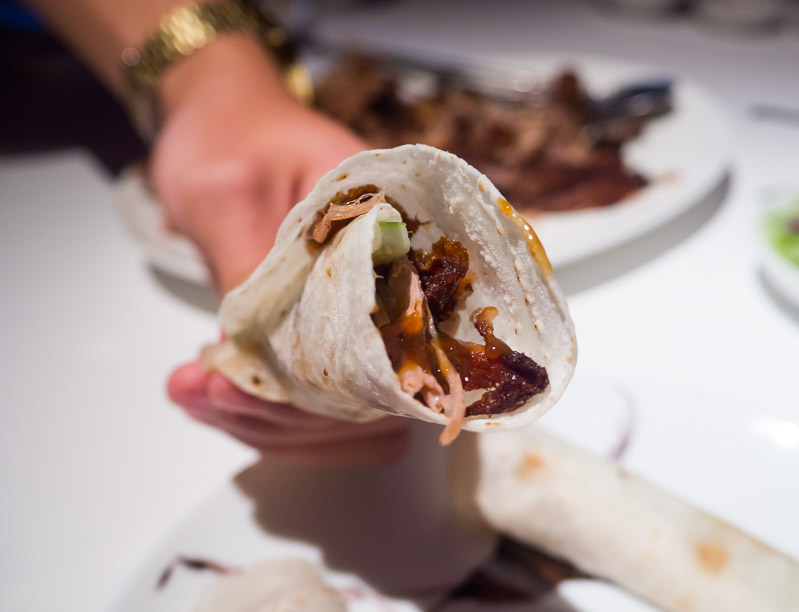 The usual soft pancake contrasted perfectly with the crispy duck skin, while a generous dollop of sweet hoisin sauce did alleviate a bit of the dryness in the duck meat. A stronger effort was shown in the Jasmine Tea Smoked Ribs ($35++), with an entire honey-glazed rack of meat for you to demolish. More than just the beautiful char, the meat was surprisingly tender and pulled right off the bone. 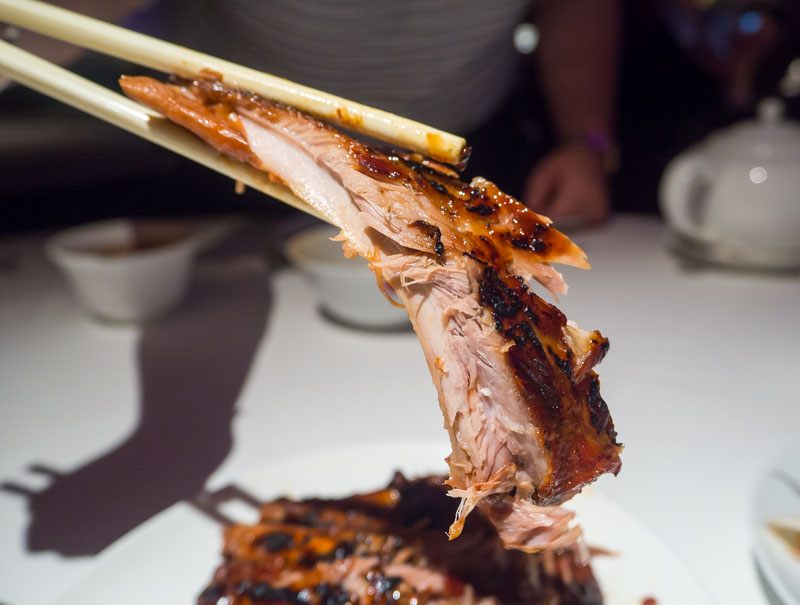 I really enjoyed its subtle smokiness that eased gently onto the palate. But the best part was absolutely the innovative touch of Jasmine tea fragrance infused into the meat that just uplifted every bite. 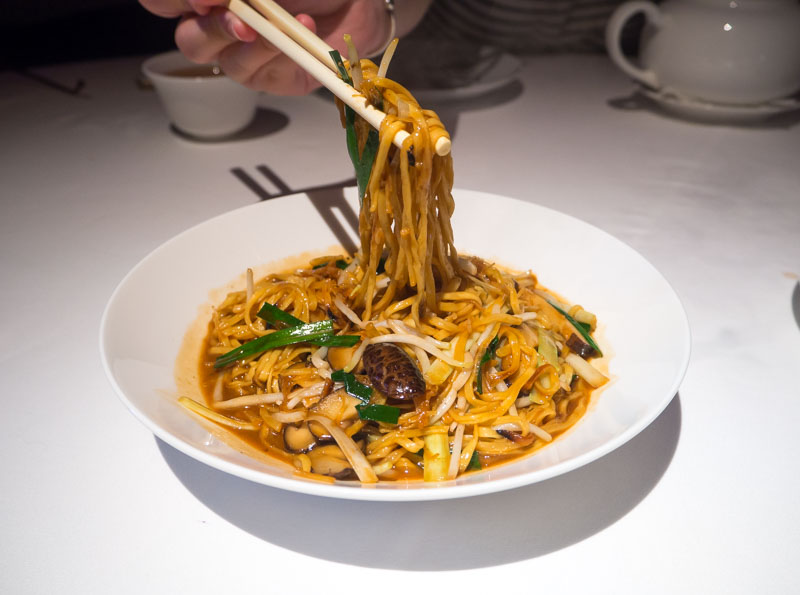 Our final savoury dish was the E-Fu Noodle ($16++) that is served with Hokkaido dried scallop. The braised springy noodles were a definite standout, as the thinness was just right for soaking up the umami of the sauce.

The dried shiitake mushrooms were also very fleshy, but my only gripe was that the dish could have used a bit more scallops. 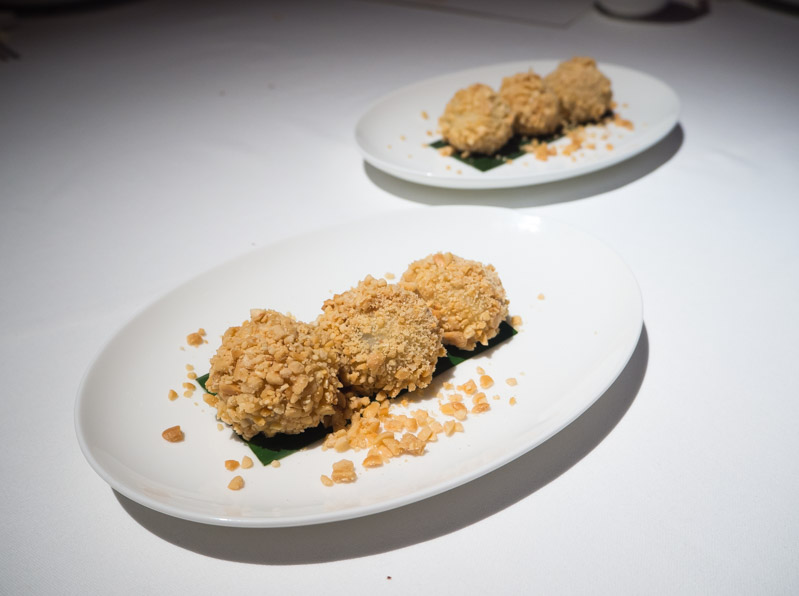 It didn’t matter, because the tang yuan trio were absolute lip-smackers. Their bouncy exterior exposed a thick black sesame paste filling that oozed a strong roasted flavour, while the ground peanuts added texture.

If you’re a nut-lover, do yourself a favour and order two servings straight away! I was still itching for more dim sum, and found respite in the Custard Buns ($6++) served in steam baskets. The bao skin was soft and fluffy, and burst open to reveal a creamy golden custard. While sweet, the custard was matched with a strong savouriness from the egg yolk that was simply to die for! 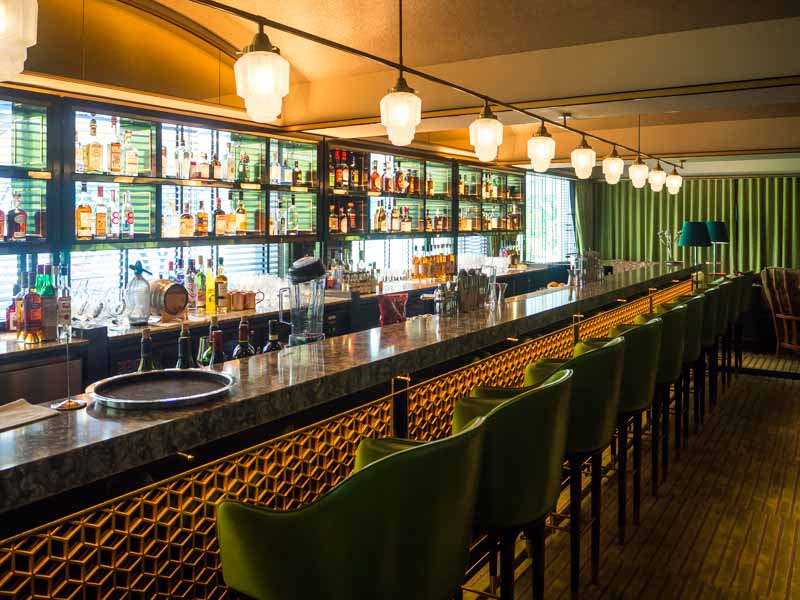 End off the meal with a cocktail at the cosy Lounge. The ambience is just as classy as the rest of the restaurant, so where better to while the time away than in one of these lavish emerald armchairs.

Considering the prices, Madame Fan isn’t going to be your everyday affair. Yet, this classy fine-dining restaurant definitely justified the massive hype and is well-worth your bucks. My colleague was even quick to rank it among her top three Chinese restaurants in Singapore!

With dishes that straddle familiar Chinese flavours, as well as Alan Yau’s contemporary edge, a meal here is guaranteed to impress people of all ages alike. So gather your family, or that special someone, for an exquisite meal to remember. Let’s just say, I left Madame Fan a fan!