The first time I tried Mahota Kitchen was about two years ago, when my family chanced upon their newly-opened outlet in Kitchener Complex.

I loved their farm-to-table concept, where everything is made from scratch with fresh, quality produce from their very own organic farm in Shanghai. 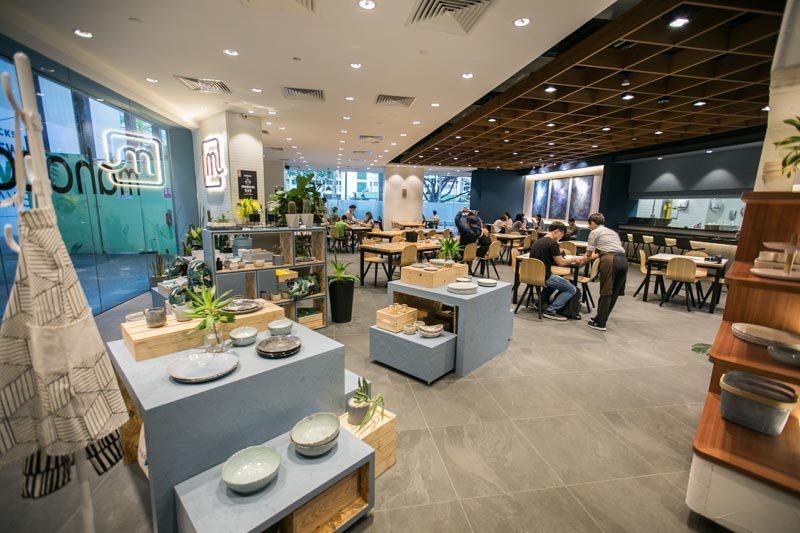 So when I heard about the opening of their second outlet in Century Square, I knew that I had to head down to check it out. Other than the restaurant, there’s a supermarket (Mahota Market) that offers a wide selection of products; and MBox Bento, a kiosk where you can build your own bento box. Both are located in B1 of Century Square. 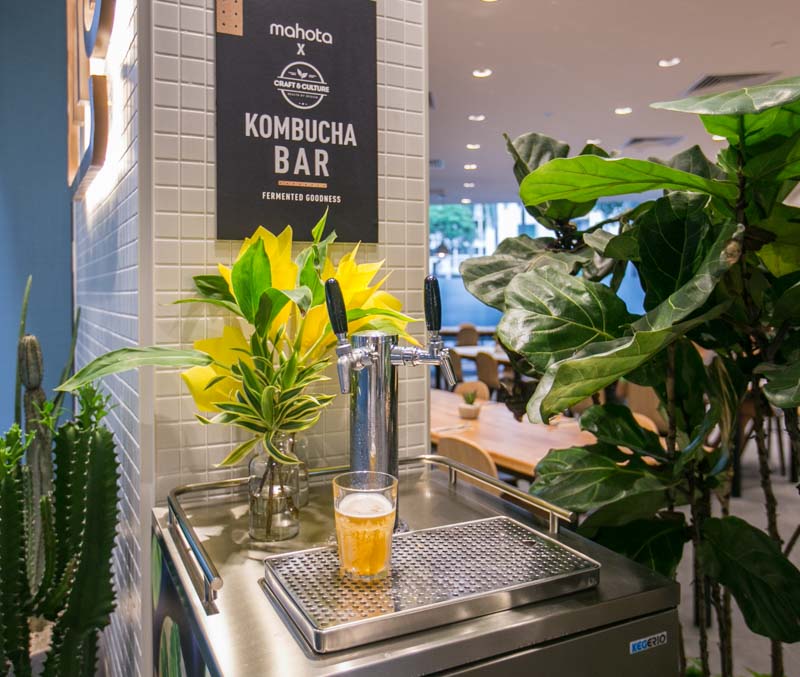 Upon entering Mahota Kitchen, the first thing that caught our eyes was no doubt the in-house Kombucha bar! 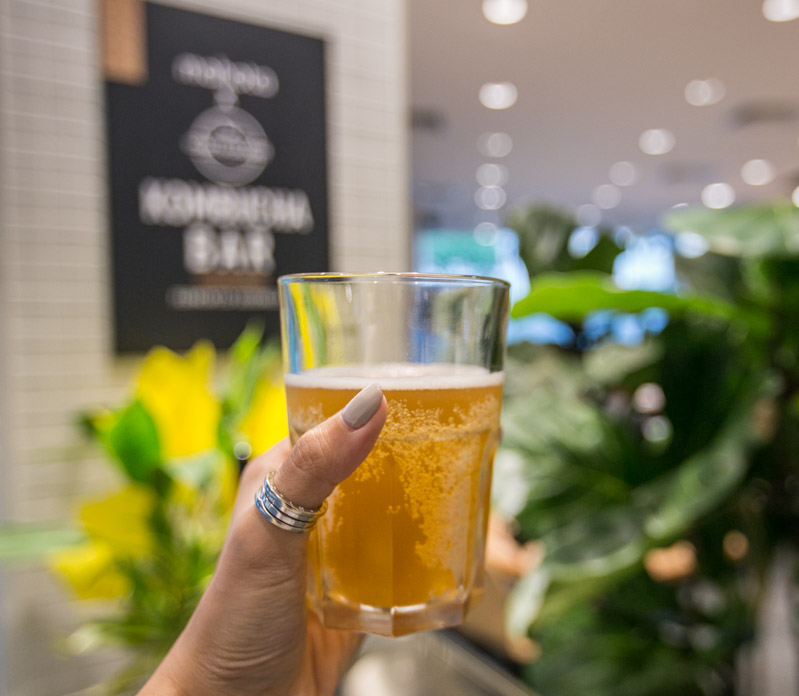 It is a collaboration with a local brewery, Craft & Culture, to offer Kombucha (S$7) — a sparkling fermented tea rich in probiotics to improve digestion, boost immunity and many other health benefits. For those who constantly face a mini “crisis” when it comes to making a decision on what to eat, fret not, the Signature Mahota 9 Element Box (S$20) is just for you. 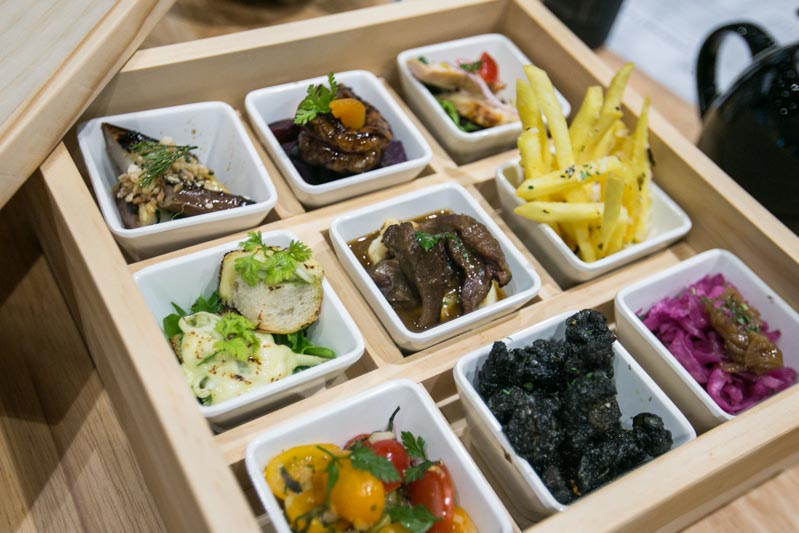 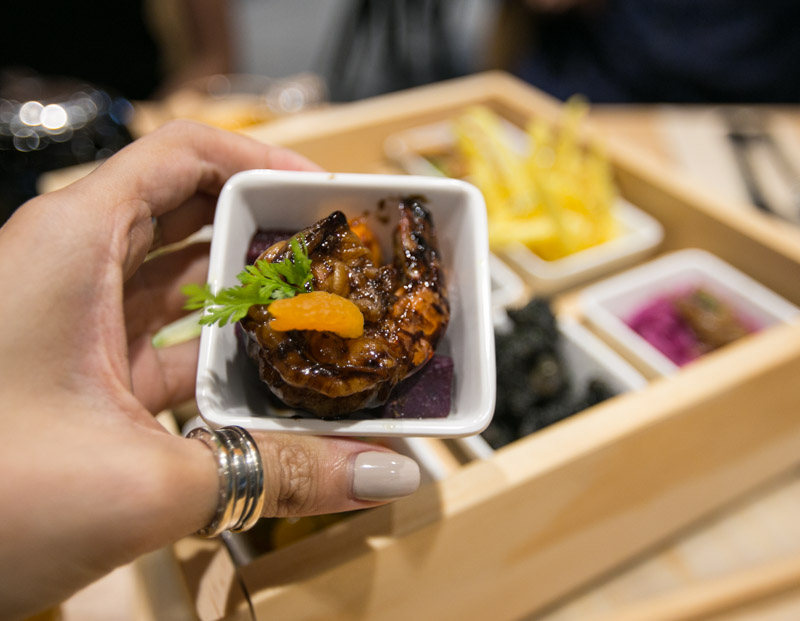 There’s also an element of surprise to it as some of the dishes are part of the chef’s specials for the day, such as this Balsamic Prawn with Sweet Potato that awakens our taste buds with its tanginess. 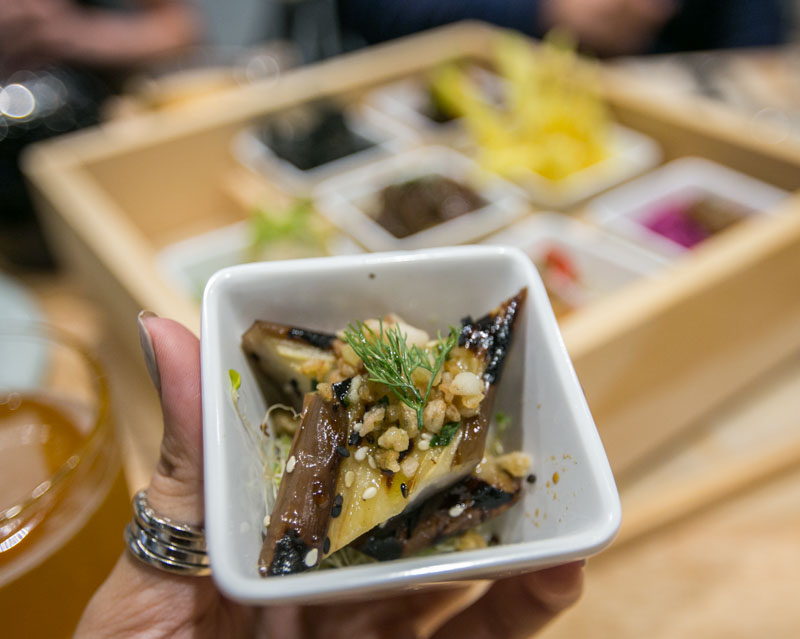 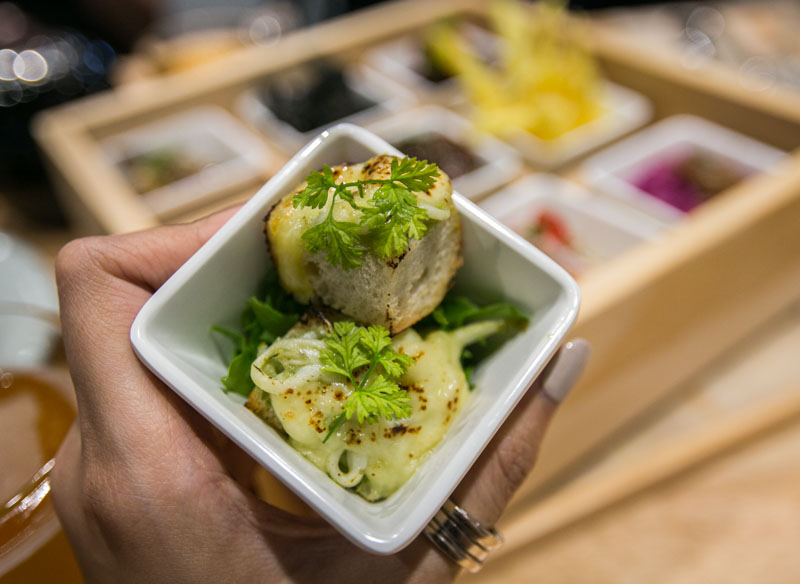 The Honey Miso Glazed Grilled Eggplant and Pesto Whitebait Bruschetta are just some of their more popular sides. As such, the dish turned out pretty one-dimensional and did not really leave an impression. 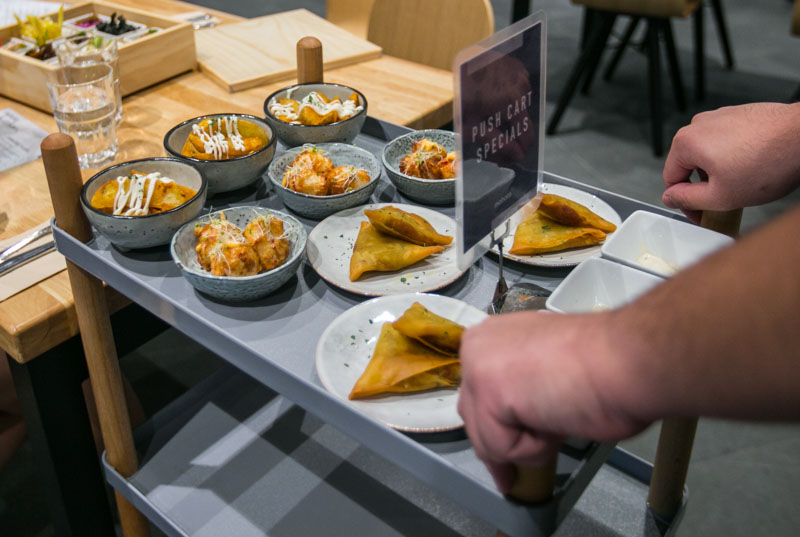 During our meal, we were approached by the friendly staff with a trolley of Push Cart Specials (S$3 – S$6), which vary on a daily basis, depending on the chef. We picked one of everything available on the pushcart. As such, we found ourselves with a plate of Potato Wedges (S$3), Lobster Balls (S$5) and Samosa (S$3).

This concept reminded me of the dim sum trolley which seems to have whittled down over the years, and thought this is a fairly innovative way to spice things up during the meal. 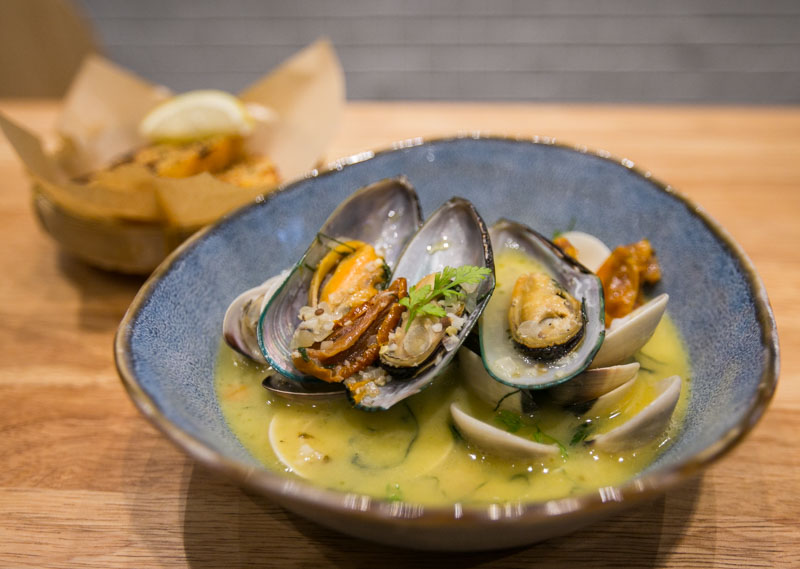 Moving on to the more substantial food items, we had Venus Clams and Mussels in Garlic Butter White Wine Sauce (S$15). 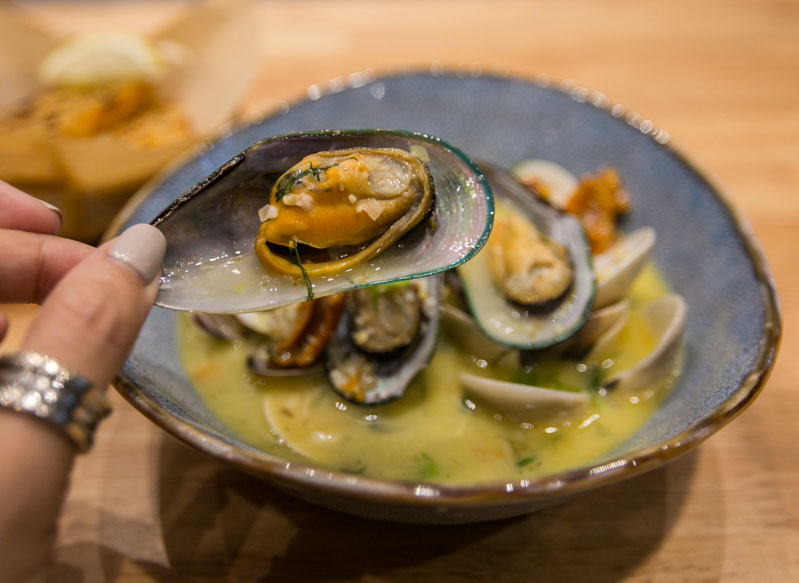 We could taste the freshness of every single ingredient, and the mussels and clams managed to soak up the broth. 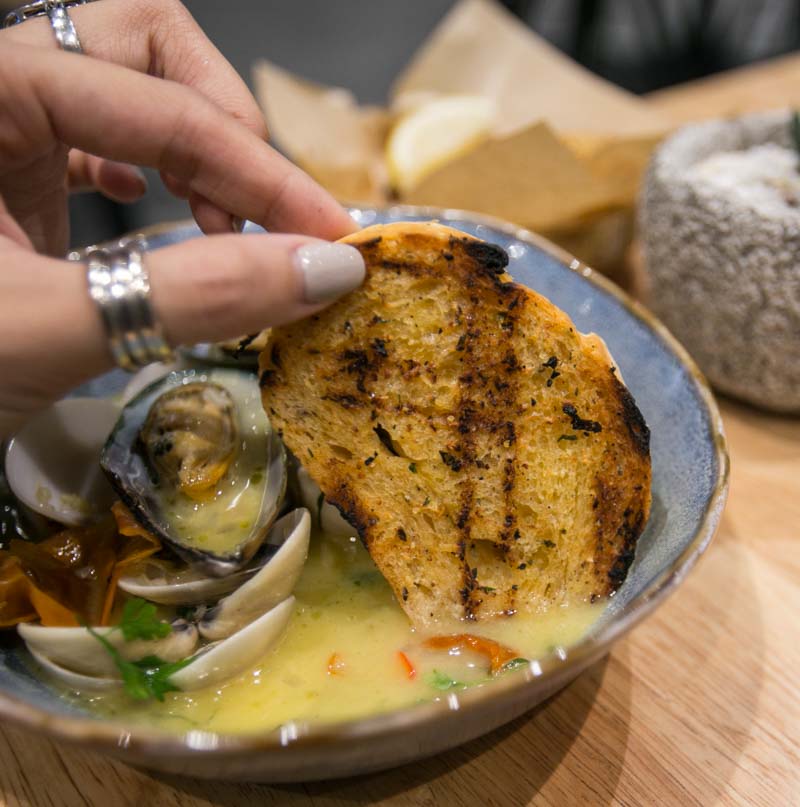 There is nothing more satisfying than dipping a slice of garlic cheese toast into the warm and fragrant gravy, and I used it to mop up every drop of the broth. 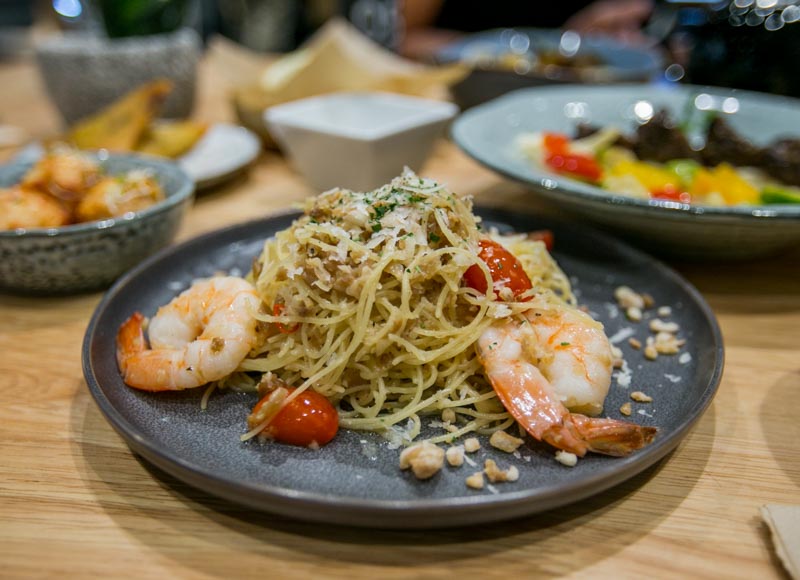 Next up, we had the Capellini Aglio Olio with Tiger Prawns and Chye Poh (S$15). The noodles had a texture similar to that of Chinese stir-fried noodles rather than pasta, though I would have preferred my noodles to have more bite to it. 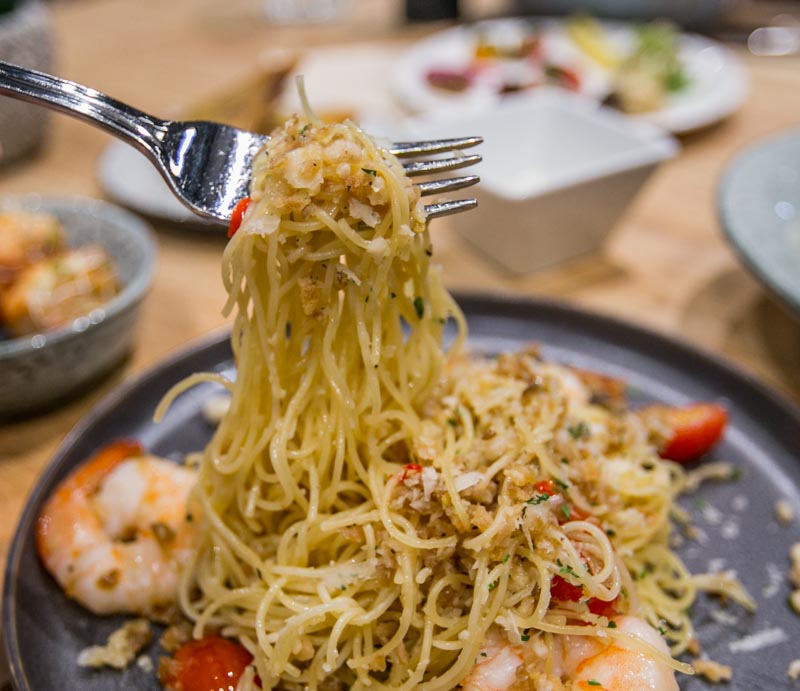 The dish is an interesting blend of flavours, and the sweetness of the chye poh tipped the balance between sweet and savoury.

The pasta turned out a tad too sweet, and I felt that it would have fared better if it was more garlicky and had a spicier kick to it. The last dish we had was also featured as one of the dishes in the Signature Mahota 9 Elements Box. The Red Wine Braised Beef Cheek (S$19) was served atop a bed of truffle mashed potato and came with a side of seasonal vegetables. 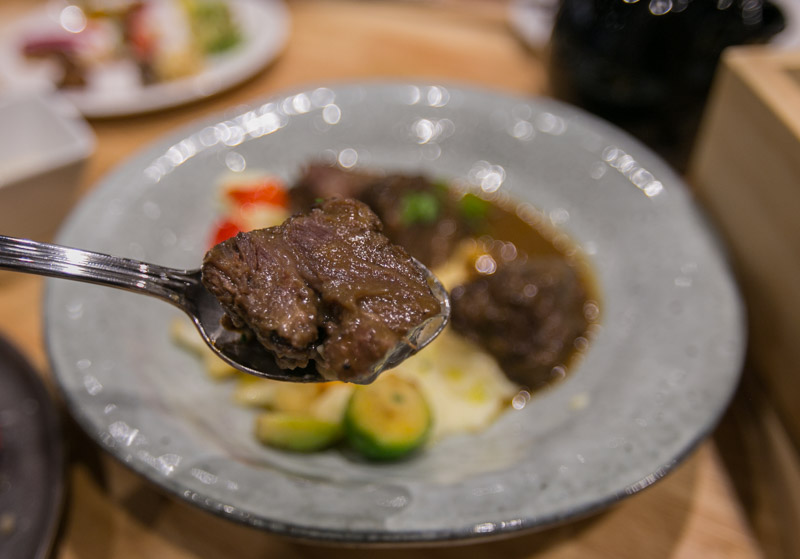 The beef cheek was fork-tender and just like the previous dish, it had a very familiar Asian influence to it. While I think that it is applaudable that they’ve made a bold move to experiment on these less popular flavours, some of the resultant creations may have turned out a little too funky for me. 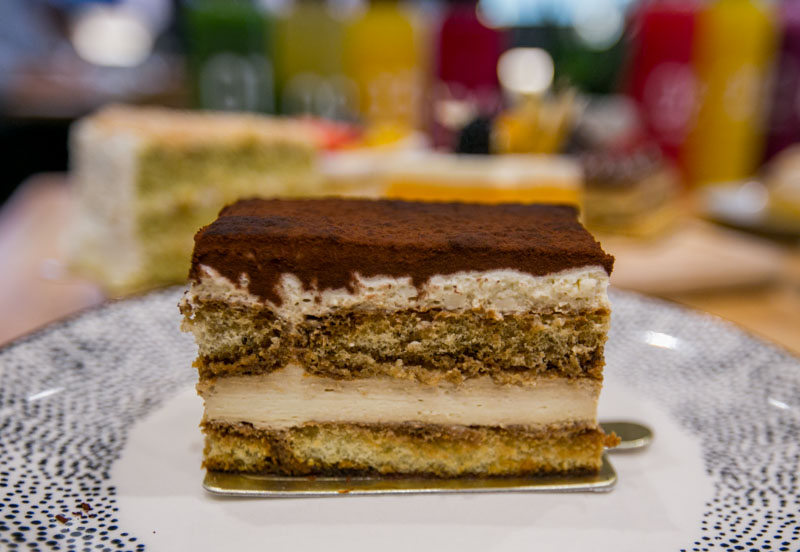 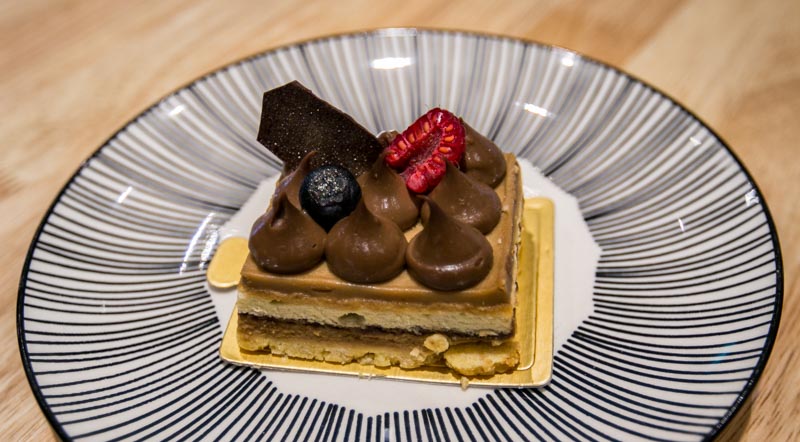 I would still stick to the more conventional flavours such as Tiramisu ($8) and Earl Grey Chocolate Cake ($6), which I enjoyed very much as both cakes weren’t overwhelmingly sweet. 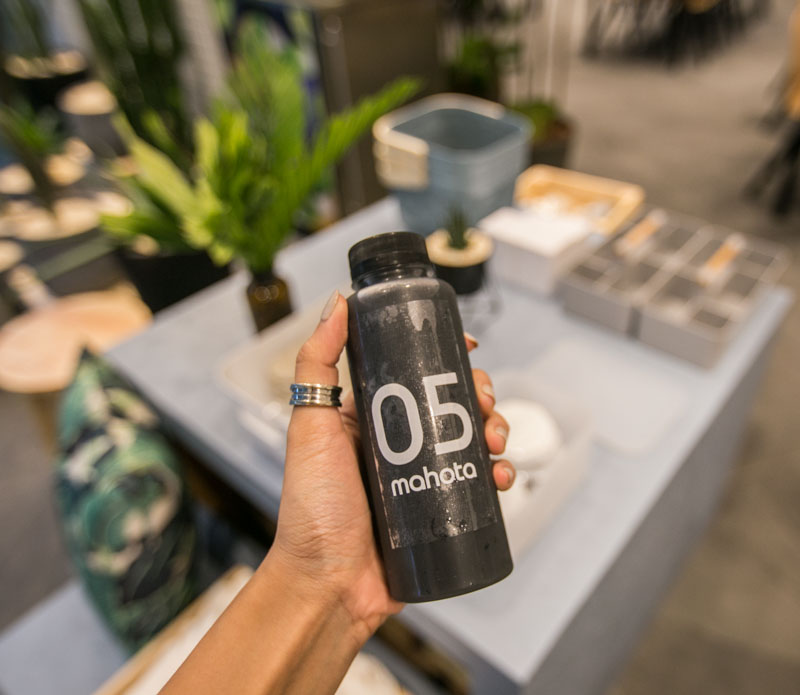 To end off the meal, we were given a slow-pressed juice to wash the meal down with. Amongst the 11 different flavours, the mix of Bamboo Charcoal, Pear, Lemon Juice and Coconut Water (S$5) was undeniably our favourite.

At S$4 – S$5 per bottle, the price is considerably lower than many other places offering slow-pressed juices. You can also grab one of these bottles for the road from Mahota Market, located in B1. With the rise of health-conscious consumers, people are increasingly aware and more particular of what goes into their meals.

So if you’re looking for a place to have a wholesome and hearty meal, look no further and head down to Mahota Kitchen for an eat good, feel-good experience! Indulge Yourself At This Whimsical Celebration Of Cakes & Desserts In...