I hate to admit it, but I am very behind in Korean culture. I’ve never followed any of their hit Netflix shows nor listened to any K-pop. It seems as if I’m at a 10-year gap, with only my Samyang and cheese combo and vague memories of a chubby bespectacled Korean man doing rodeo dances. Meokja by JUNGGA, which is located at GR.iD Mall in Dhoby Ghaut, presents a chance for me to be more in tune with Korean culture, albeit in a culinary sense. I can already feel the sense of doubt in you. “How can this be authentic?”, you may ask. Well, Meokja by JUNGGA is helmed by Chef Jung Sangwoo, a Korean-Muslim revert. When he first arrived in Singapore, he realised many Muslims could not experience proper halal Korean food, including himself.

This became his driving force to start a home-based business to share what authentic Korean food should taste whilst only using halal ingredients. Meokja by JUNGGA might not have the most extensive Korean menu but that’s not always a bad thing. Instead, it focuses on some of the essential dishes as well as Korean street food that you might not even have heard of.

There were also several street foods and sides such as TteokBokki (S$9++/S$18++) and Kimchi Jeon (S$7++). Since I was with an eating buddy, we decided to opt for the BunShik Set (Street Food Combo) (S$32++) which had a large TteokBokki, Chamchi Mayo Jumeok Bap and 5 sticks of Eomuk Tang.

We also ordered Samgyetang because Arnold Schwarzenegger rated it highly when he had it. And that was exactly what went down the hatch first. The Samgyetang came with a side of pepper and kimchi, as well as a bowl of rice. Honestly, I thought it looked really plain with what seemed to be steamed chicken in water with green onions, and what looked like chopped twigs and a singular red date. 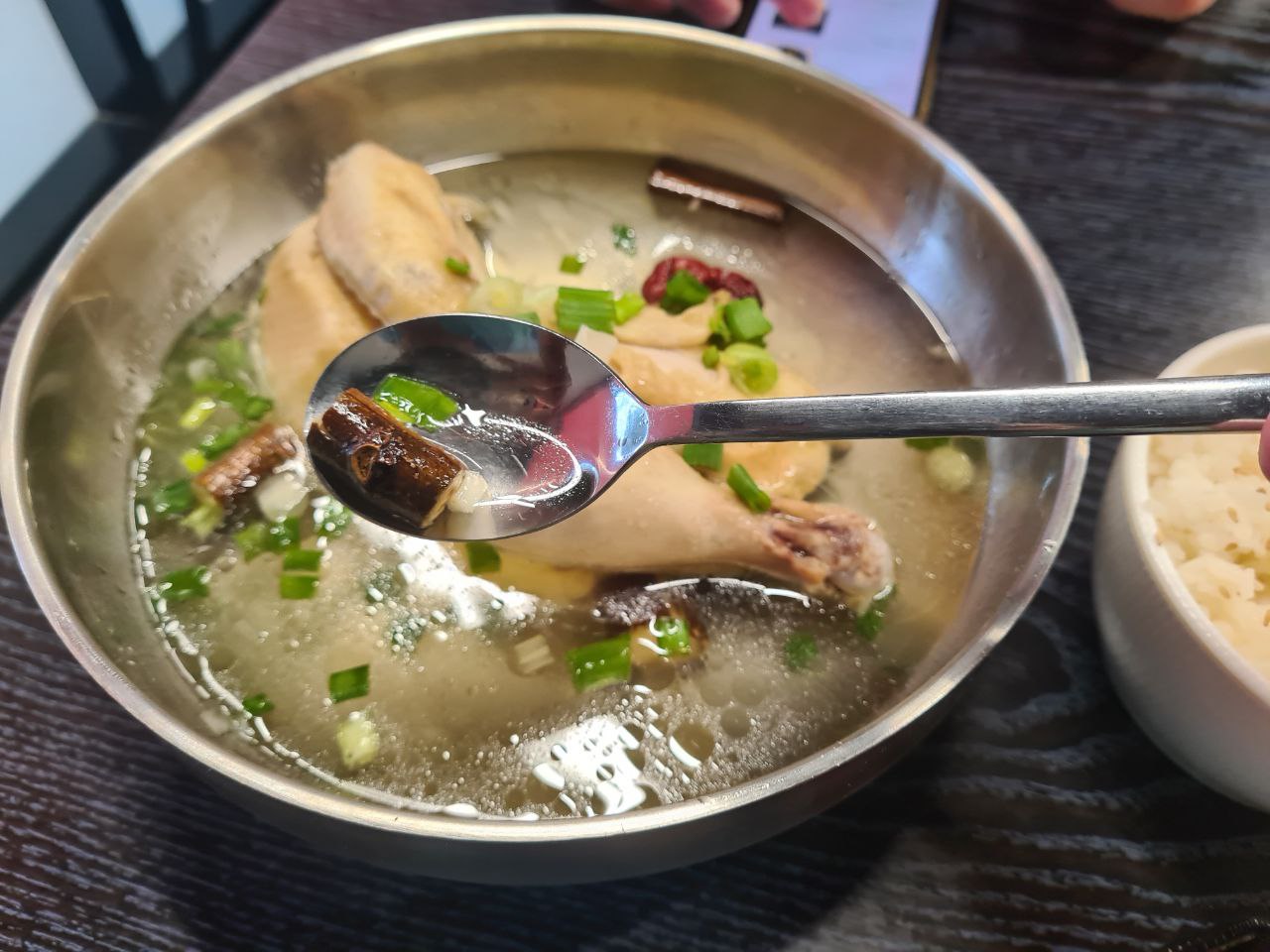 True enough, it tasted exactly how it looked— bland. The soup could have easily been passed off as mild chicken stock. Now I know why they had pepper powder on the side. Its addition did elevate the taste to a peppery chicken stock. There also wasn’t any ginseng flavour or ginseng at all. I was hoping for the steamed chicken to tear with just a slight delicate pull from my chopsticks, but I found that not only did I require a spoon, but I also had to pin down the chicken with my chopsticks to even stand a chance of getting a piece of meat without making a mess of the soup. Same as its watery broth, the chicken was bland. It’s probably intentional since this is considered one of the healthier meals from Korean cuisine, but a little bit of seasoning never hurt anybody. Having said that, I really enjoyed the kimchi— it had a nice spicy kick and the sour fermented taste was just nice. The difference was like night and day. Next was the Eomuk Tang which is a form of fish cake soup. The first thing I did was taste the soup, which had a familiar savoury flavour. I’d say it tastes like your generic ramen instant noodle broth, but to replicate that flavour whilst using natural ingredients, that’s definitely a chef’s touch in action. I polished my bowl of rice with the broth soaked in it. The fish cakes had a completely different texture than what we are accustomed to. It was like a deflated tau pok with not-so-chewy skin. However, I promise you that the taste will bring back childhood memories as they taste exactly like Dahfa Dried Fish Fillet — only soggier! Swiftly on, our next dish was the TteokBokki. I was somewhat familiar with the dish as I’ve had rice cakes before in the form of mala but never with its signature Korean sweet and spicy sauce. There were also pieces of fish cakes intermixed with the devilish red sauce. The rice cakes had a really satisfying chew, almost like eating a thick gummy bear. I also like how the sauce wasn’t literal acid on your tongue but instead had a moderate amount of spice that slowly built up. The sweetness at the end also helped lessen the effect of the heat, though not for long.

I would suggest ordering the large option only if you have 3 or more people eating with you, as we got quite jelak of the taste (not to mention the heat) when we tried to finish the dish (which we didn’t manage to). The Chamchi Mayo Jumeok Bap was certainly a surprise. It may look like your average sushi ball but it tasted way more than that. It was surprisingly crumbly for rice-based food with a smoky taste of an unknown origin. Maybe it was from the tuna pieces that didn’t have a canned flavour.

Supposedly a kid’s favourite, but don’t let that stop you from ordering these bad boys! I definitely had a good dinner at Meokja by JUNGGA, with its authenticity and of course, it being my first legit Korean meal. Though not everything I ate was a banger, what was even more important was my newfound desire of trying more authentic Korean dishes on my next visit.

I’ve already set my eyes on the JjaJang Myeon and the Kimchi Jeon, mentally salivating at the thought of it. Mmm…

Previous articleCatch as many fresh tiger prawns as you can for RM35 & have a steamboat feast at Utama Prawning
Next articleNew in town: Fieldnotes by Zee & Elle — New patisserie at Neil Road specialises in handmade & aesthetically pleasing desserts