Along the lively and trendy streets of Clarke Quay sits The Riverhouse, a multi-concept space that houses Yin, a bar, Yang, an Asian international club and Mimi Restaurant. Preserving much of the original architecture, The Riverhouse makes for a gorgeous and luxurious space right in the middle of Clarke Quay. While we would love to explore all that The Riverhouse has to offer, for now, we are taking a closer look at Mimi Restaurant.

‘mìmì’ means ‘secret’ in Mandarin, and the restaurant leans into this idea right from the start. After all, this heritage site used to be the headquarters of the notoriously Ghee Hok Society, a Teochew secret society that was involved in all sorts of illegal dealings. And just like any secret society, HQ has to be shielded from the public.

You may enter mìmì if you can find one of their two hidden entrances. It’s all very cloak-and-daggers, which makes the experience at mìmì all the more fun and exciting. 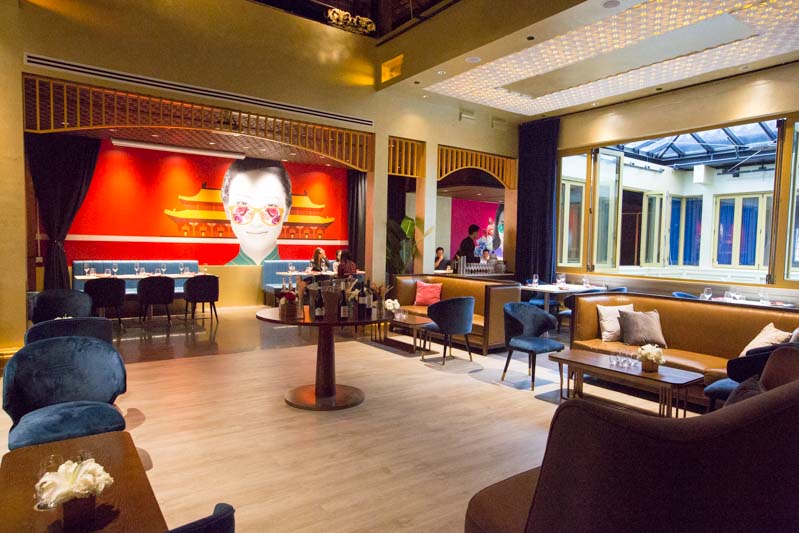 When you finally get to Mimi, you’ll notice how the interiors are opulent as they are playful. With plush teal seats, tongue-in-cheek murals and soft Chinese acoustic tunes crooning in the background.

With large windows that overlook into Yin and Yang, you’ll feel like one of the triad generals keeping things in order.

After imagining all the fascinating figures that once walked the halls of The Riverhouse, I settled down on the plump cushioned seats ready to try all that Mimi has to offer. 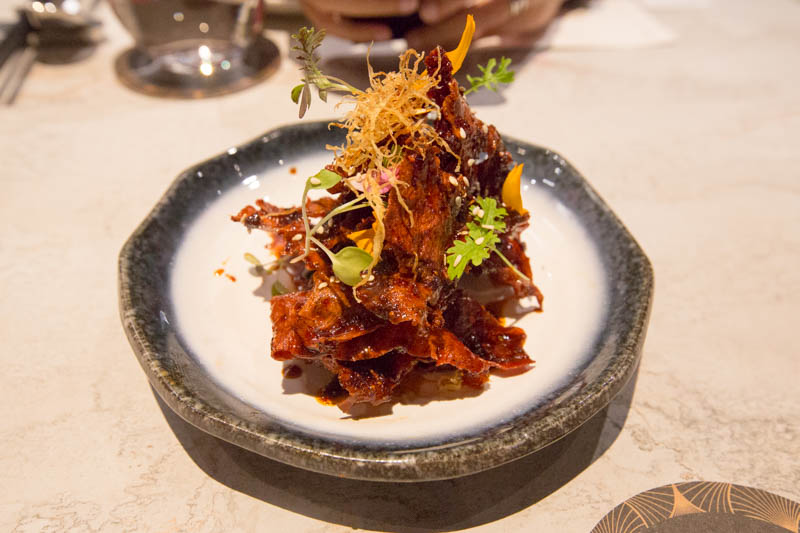 Mimi’s menu of modern tapas pays homage to old and forgotten dishes but presented in contemporary small plates fashion. A blend of tradition and modernity, I was excited to see how head Chef Sam Chong executed this idea.

I began with the Crispy Beef Jerky 灯影牛肉 (S$14), a long-forgotten Sichuan classic from the Ming Dynasty. These gossamer-thin ribbons of beef were glazed in a spicy and numbing mala sauce before being topped with fried shredded ginger and roasted white sesame seeds. A seemingly simple starter but one that displays the technical prowess of Chef Chong—not everyone can achieve sliced beef as wafer-thin as these.

Thin but dangerously potent, the glistening glaze tickling my nose with those pungent spice notes. Each crispy strip delivered a spicy kick that was sharp as a shiny Louboutin heel; you’ll be going back for seconds. 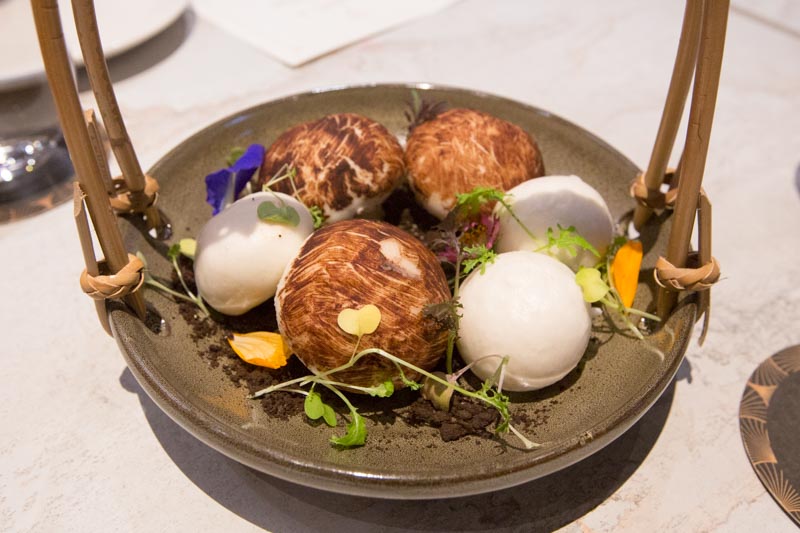 The next dish inspired oohs and aahs the moment it was set down on the table. This Garden Of Mushrooms 香菇花园 (S$15) had to be one more adorable creations I’ve come across.

These might look like mushrooms, but they aren’t at all, they were a medley of char siew buns and steamed buns adorned with edible flowers with a bed of Oreo crumbs. 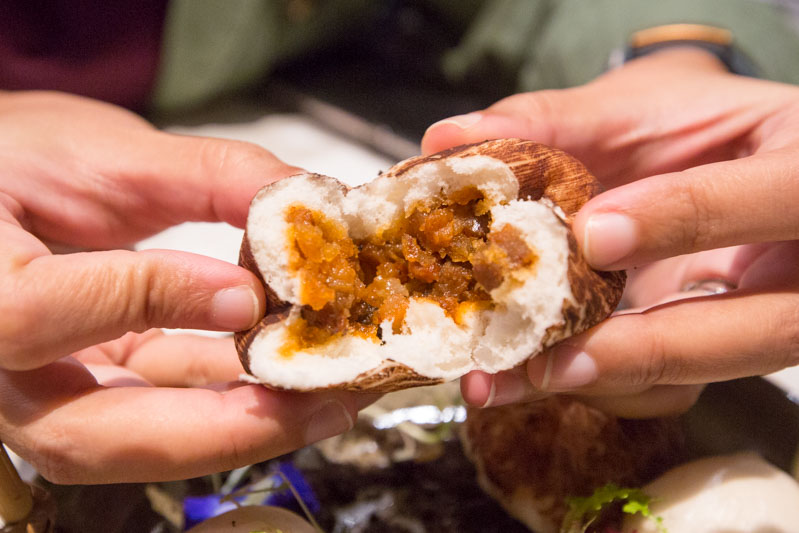 The char siew buns were painted with cocoa powder to mimic the texture of mushrooms, which was an ingenious idea. While the presentation deserves praise and I found the char siew buns tasty, they were nothing to shout about. 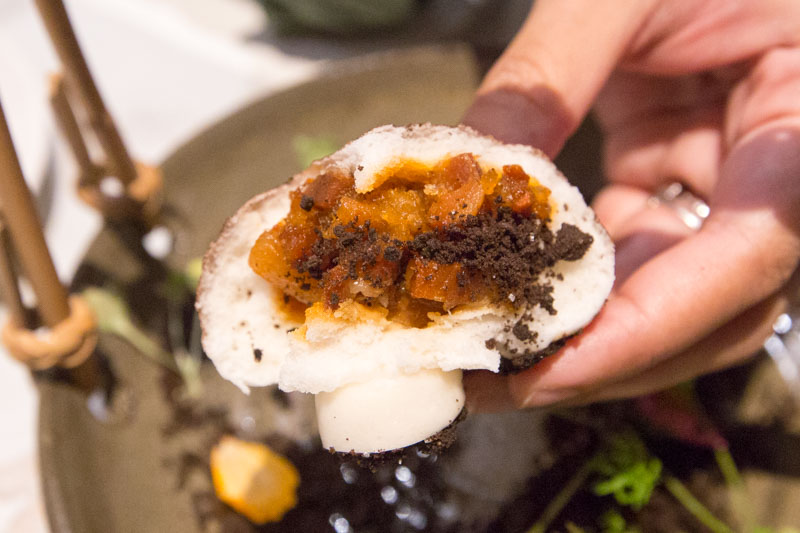 Nevertheless, I did have fun mopping up the Oreo crumbs with the bun. 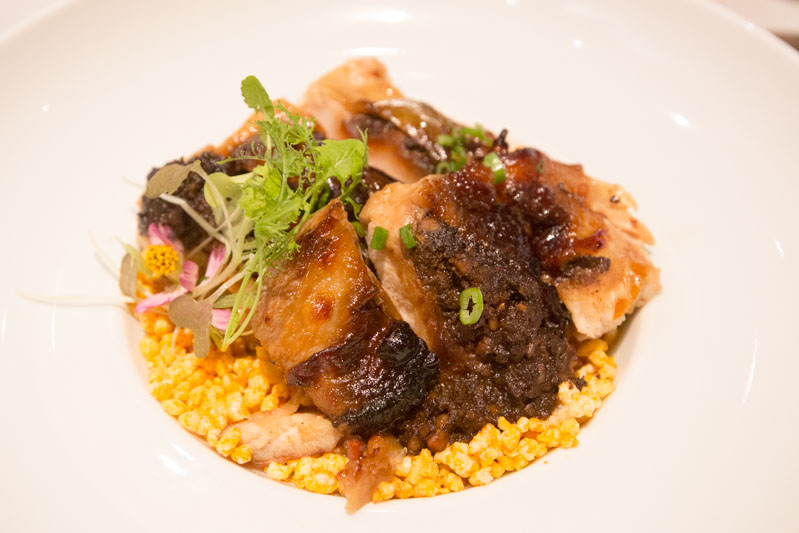 Up next was the “Black Gold” Chicken 独颗黑蒜烤鸡 (S$18), a show stopper for sure. A portion of oven-baked chicken is stuffed with mixed nuts and slathered with a sticky dollop of black garlic. This all sat atop a bed of marigold-coloured crispy rice. 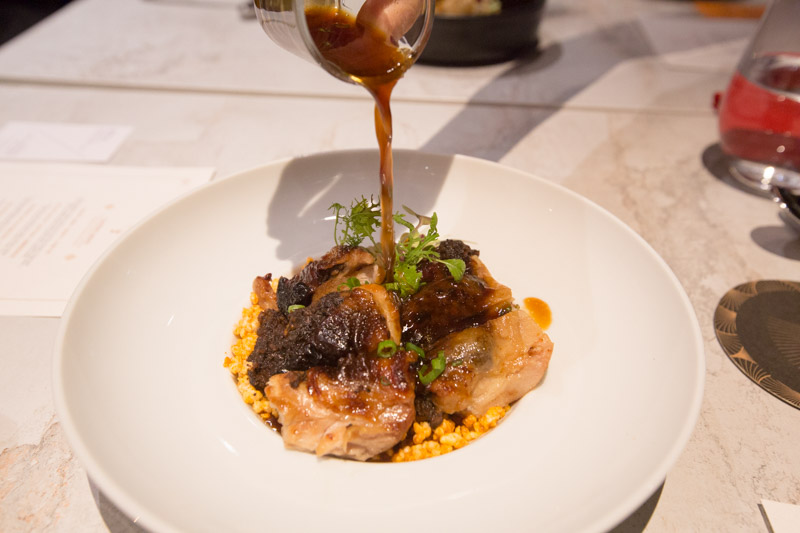 That’s not all, you also get a little pitcher of rich chicken soup, essentially ‘chicken essence’ if you will, to pour over the dish. 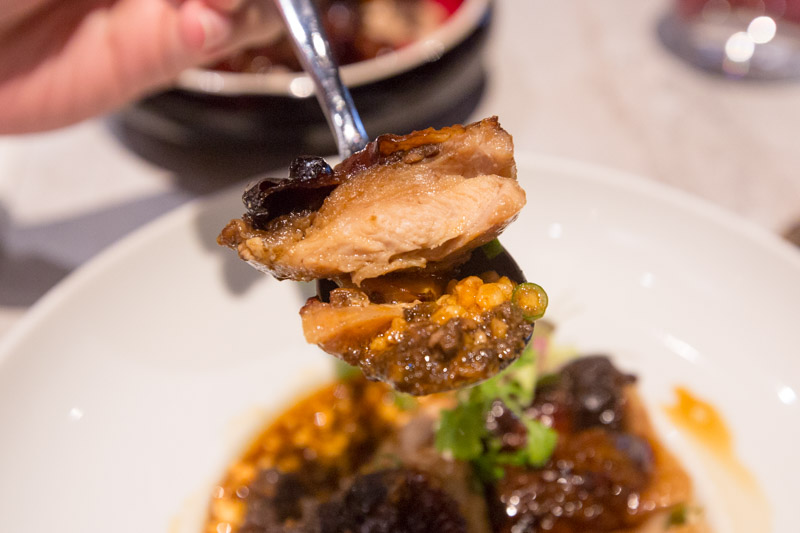 Black garlic is a lot more mellow than regular garlic and imparts a little sweetness to the oven-baked chicken. A textural delight, you get the crunch from the mixed nuts coupled with the juiciness of the chicken before ending off with the airy lightness from the rice crispies.

Plus, the chicken essence delivered a little umami punch as you finish your mouthful—a clever blend of Western and Asian cooking that elevated a simple protein such as chicken. 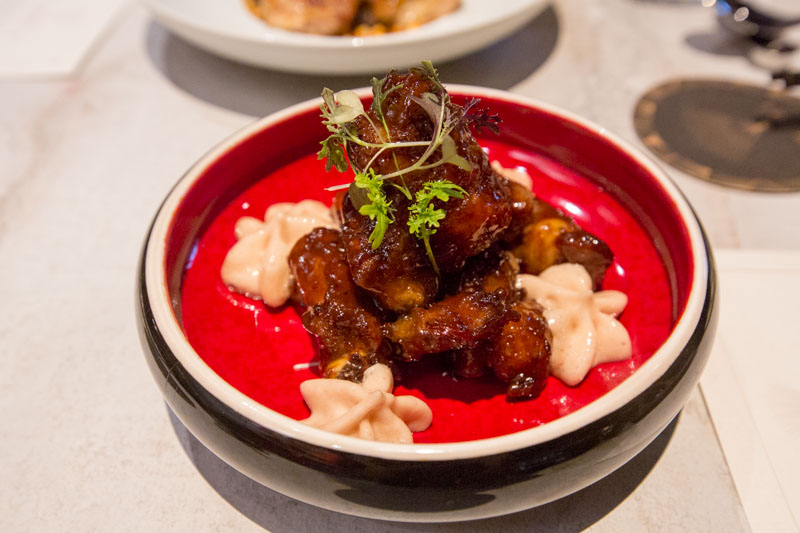 Piled high with sticky blocks of stout-marinated pork ribs and dotted with frothy Guinness espuma (a fancy word for foam) stars, Snout About Stout 黑啤排骨 (S$18) was one of Mimi’s crowd favourites. 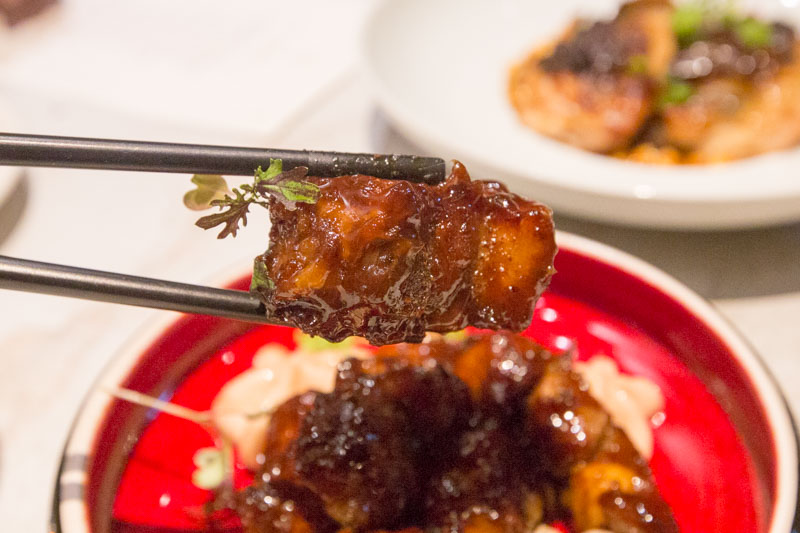 Taking a cue from Chinese zichar but with Mimi’s signature modern twist. Like the sticky zi char coffee ribs, these pork ribs had that toffee, treacly-like quality which was very much welcomed.

Like the adage, there can be too much of a good thing. The glaze was just so gooey and thick that it clung onto the plate. 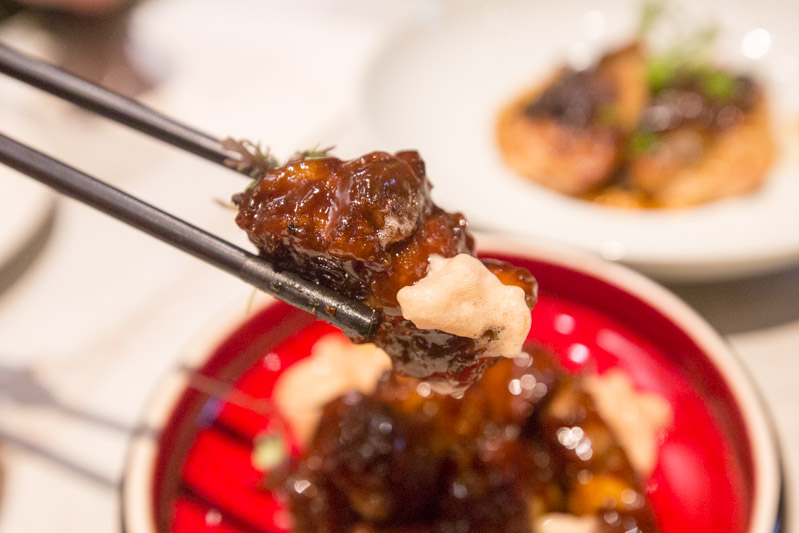 While the pork was tender, succulent and seasoned well and the espuma was a novel and interesting contrast, the experience of eating these ribs was not the best. By the end of it, I was busy trying to get the sticky bits out from in-between my teeth. 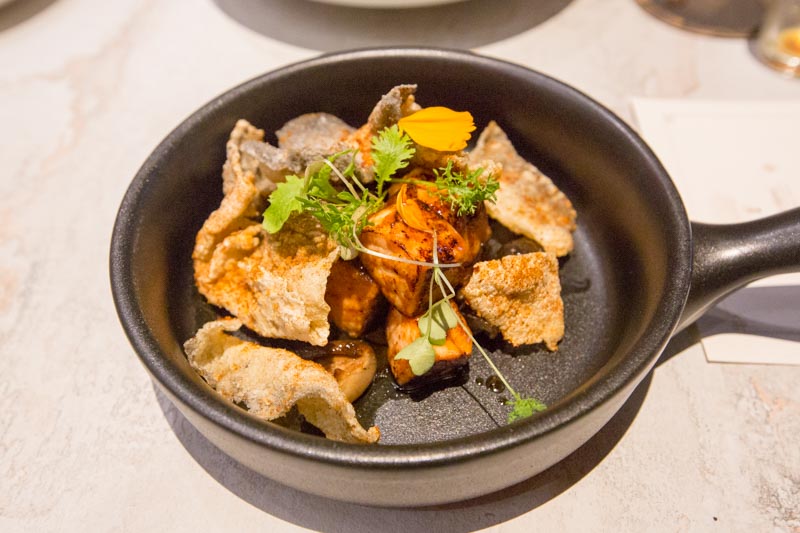 For fish, it was the Salmon Medallions 香煎三文鱼 (S$26). I do take slight issue with calling the salmon medallions when they are clearly cubed. My pedantic nature aside, these wok-fried salmon cubes with braised shiitake and soya sabayon did little to excite me.

There was nothing wrong with the cook on this dish, only that it was a little unremarkable and pedestrian as compared to the other dishes. Another one for the ‘gram would be Mimi’s Saucy Crab & Egg Affair 鸳鸯蟹肉配馒头 (S$18). With a yin-yang pool of chilli crab sauce and egg white sauce, it’s surrounded by a ring of mini fried mantou. With this one, Mimi certainly pandered to everyone’s favourite part of eating crab, and I’m all for it. 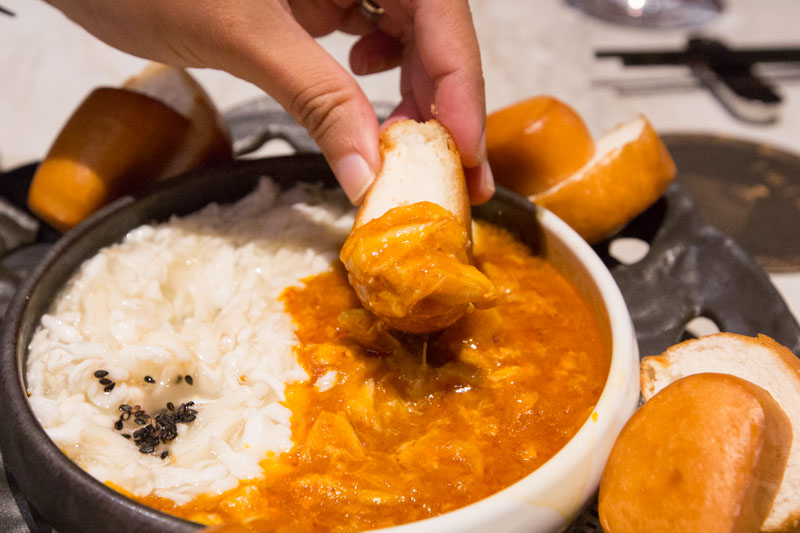 This made for a satisfactory dish; the mantou’s were not as fluffy as I would have liked. Both sauces were resplendent with chunky pieces of crab which is always a plus. Despite the creative presentation, I was not impressed with the dish.

I found the sauces a little mediocre; yes, the sauces were what they purported to be, and though tasty, they were also entirely forgettable. 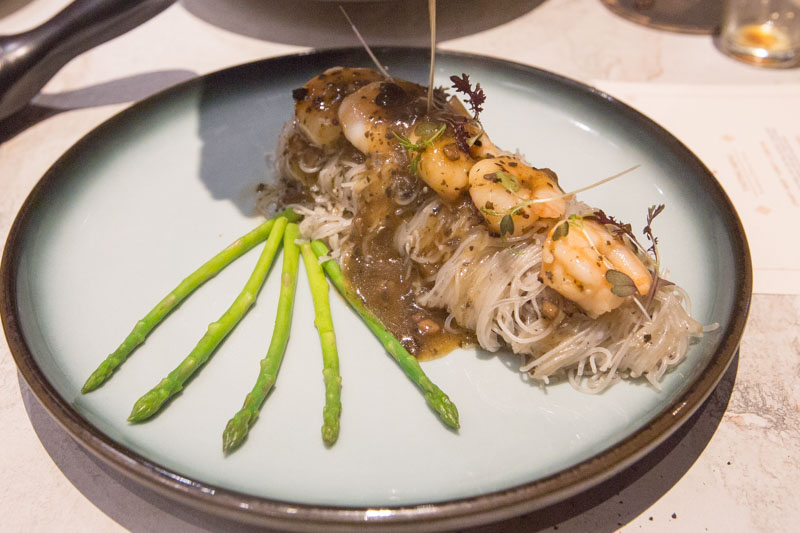 You’ll smell The Unsubtle Truffle Mein 黑松露虾仁鸳鸯米 (S$20) before you see it. As we all know, truffles are as subtle as a gun.

A neat swirl of vermicelli and glass noodles topped with stir-fried prawns sat before me, as well as a pitcher of black truffle sauce. What comes next is pretty apparent—douse your noodles with a liberal amount of truffle sauce. 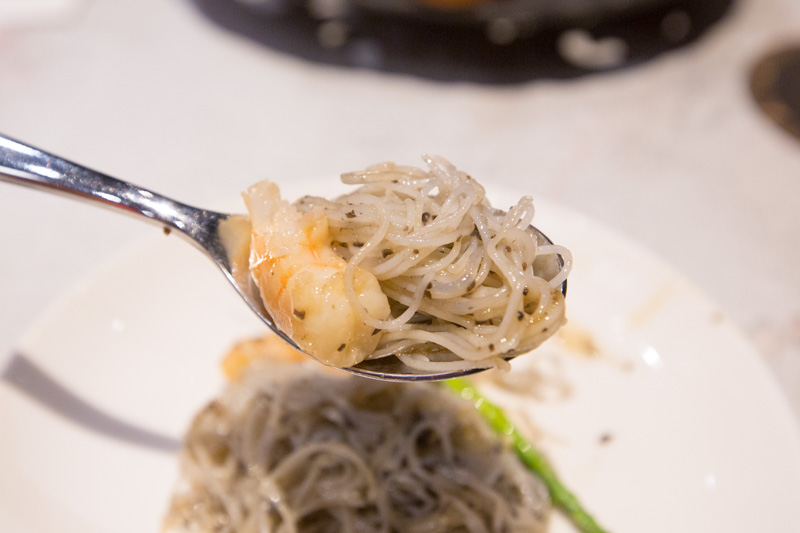 I quite enjoyed the different textures of the vermicelli and glass noodles. They are distant cousins to the Italian capellini but even more so delicate and light, which complemented the thick and substantial truffle sauce. I was polishing off every last strand!

A dish that properly encapsulates the harmony between Asian and Western cooking—that’s a fusion dish I can get behind. 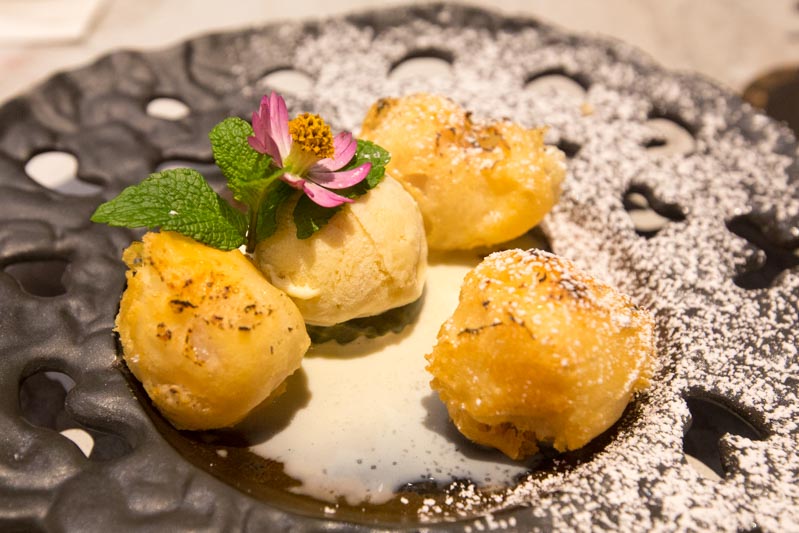 Desserts are always a must and Mimi’s Lychee Lust 无人知是荔枝来 (S$8) is inspired by a tale as sweet the dessert. The story goes that Yang Guifei, one of the Tang Emperor’s beloved and most beautiful consort simply adored lychees. The Emperor loved seeing Yang Guifei’s face lit up when she had lychees.

Now, lychees didn’t grow anywhere near the Forbidden City, so he would send riders on his fastest horses far and wide to obtain these fleshy red fruits. All this, just to see Yang Guifei smile. That’s commitment right there. 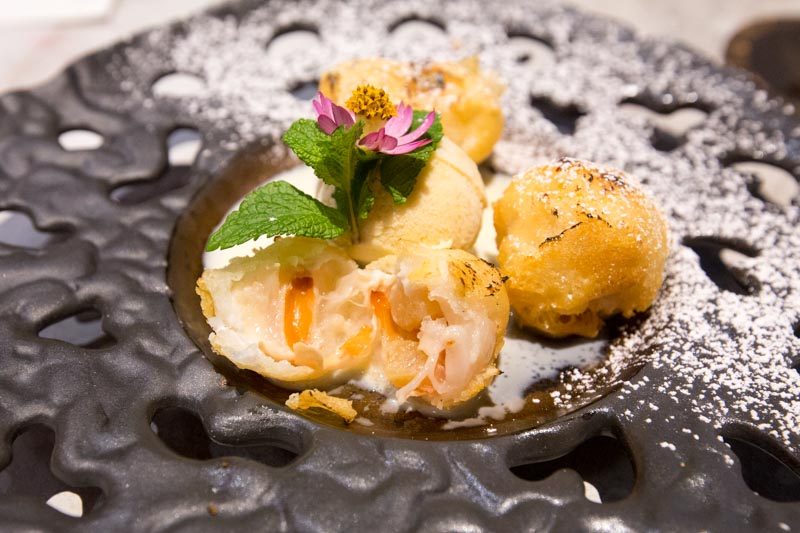 For Mimi’s dessert, it’s a little step up from just lychees. Here, you get lychee fritters filled with candied ginger and a scoop of vanilla ice cream. A play on temperatures and textures, the crispy lychee fritter mingled pleasantly with the vanilla.

An enjoyable dessert for sure, though not one I’ll come back for.

While their menu is cohesive, there were a couple of misses with the execution of some of their dishes. Fortunately, there were more hits than misses and with a little more fine-tuning, those kinks will be easily ironed out.

Still, Mimi Restaurant is worth a visit for the ambience and overall experience.