Kallang Leisure Park is well-known for its ice-skating rink and bowling centre, so I was surprised to find this hidden gem nestled on the first floor of this entertainment mall.

Miryoku Bistro was inconspicuously located right opposite popular and cheap eats like Pasta Mania and EAT. But the minute I browsed through its sleek menu, I knew that this Japanese-Italian bistro was one-of-a-kind. 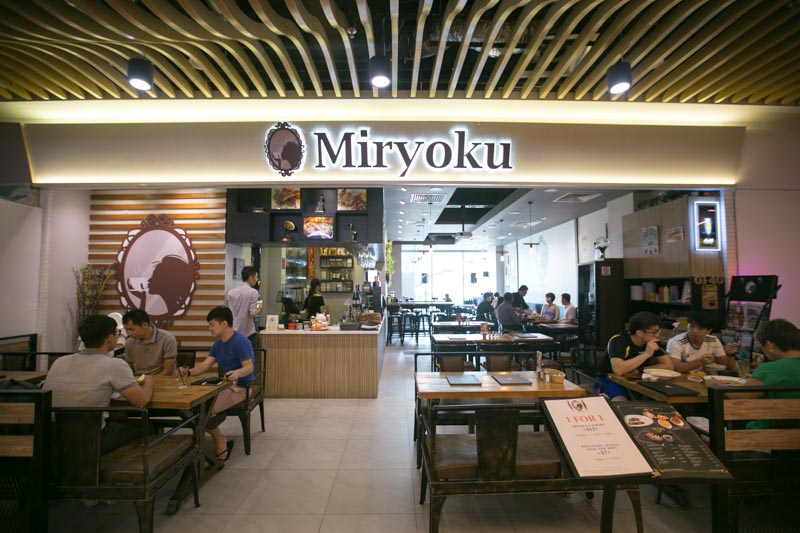 The unique thing about this bistro? It’s actually a make-up bistro, where people can dine while having their make-up or hair-do done professionally as well.

Miryoku Bistro was opened by two sisters — one studied Food and Beverage Business Management while the other, who was former Ms Teen Singapore and Ms Fashionista, has a diploma in Make-Up Artistry.

While the professional make-up and hair-do services are available on an ad-hoc basis, what drew me in was the unique items offered on its menu. 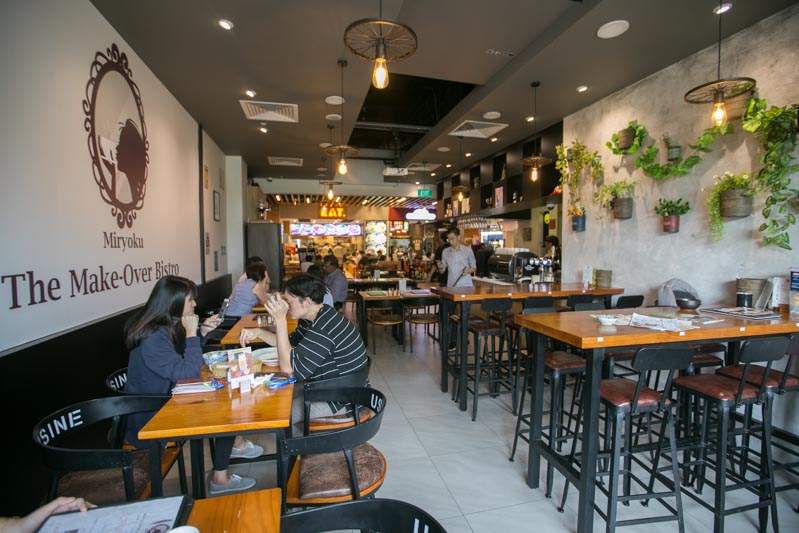 All the dishes are affordably priced too, between S$10 to S$30. 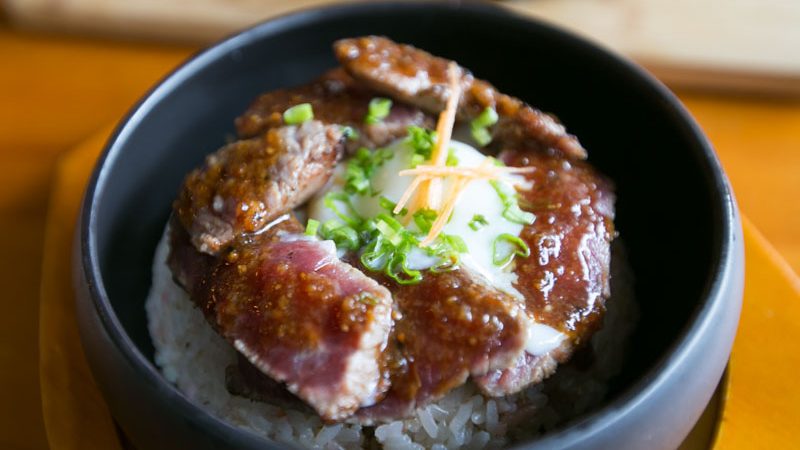 The Premium Don (S$18.90) came with a ring of gorgeously pink beef slices. The beef had been quickly seared and glazed with a sweet sauce, and comes with a soft onsen egg and fluffy white rice mixed with sakura ebi. 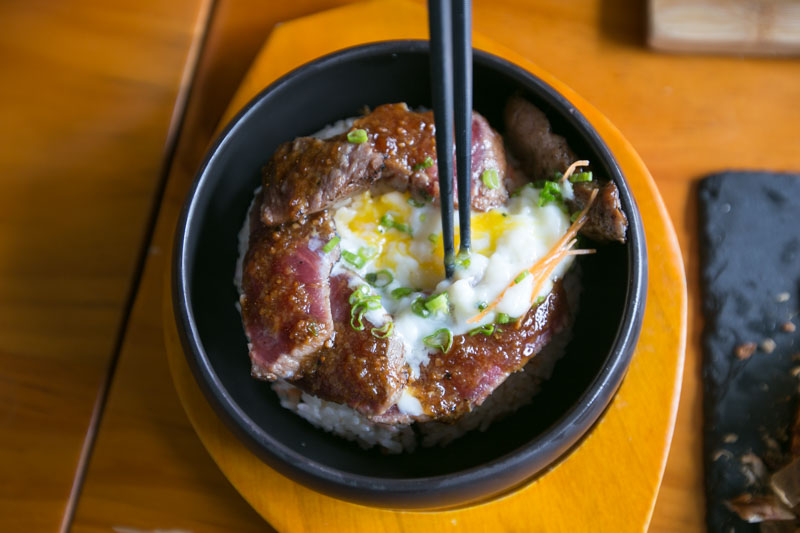 I’m not sure what exactly it is about breaking apart a soft onsen egg that makes me drool so much.

It might be the jelly whiteness of the egg white, precariously teetering between cooked and uncooked, and the silkiness of the egg yolk, coating everything it touches with a velvet touch.

Miryoku Bistro’s Premium Don had a perfectly cooked onsen egg, breaking apart softly the minute I poked into it with my chopsticks. 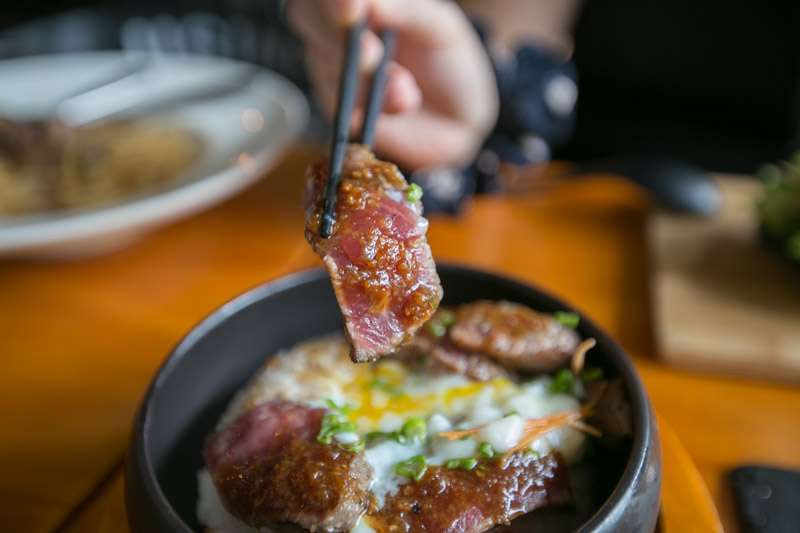 The beef was cooked tataki style — this means that the meat was seared very briefly over a hot flame or in a pan. This results in the outside being cooked, with a nice char, but the inside still being incredibly raw and soft.

The beef was succulent and sweet, and melted in my mouth. Because of its short time over the flame, I could taste a tinge of smokiness, which added more umami flavour to it. 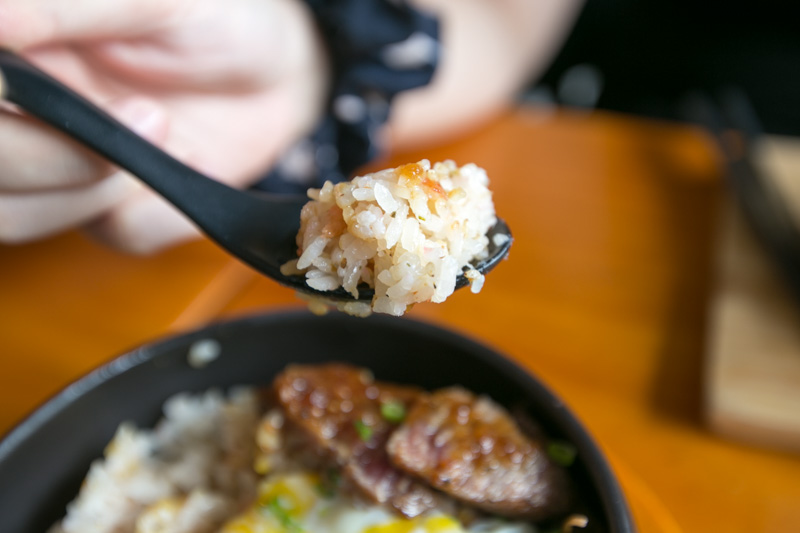 Honestly, I couldn’t tell that the rice was anything different until I scooped it up. The minute I did, I could see little pieces of roe in the rice, and also that the rice grains had a slightly orange tinge to it.

The rice was slightly crispy and crunchy — I couldn’t tell if it was from being served in a black claypot bowl, or if its crunchy texture came from the ebi, but it was really addictive. The taste of the sakura ebi wasn’t overpowering but added light and natural floral sweetness to each spoonful. 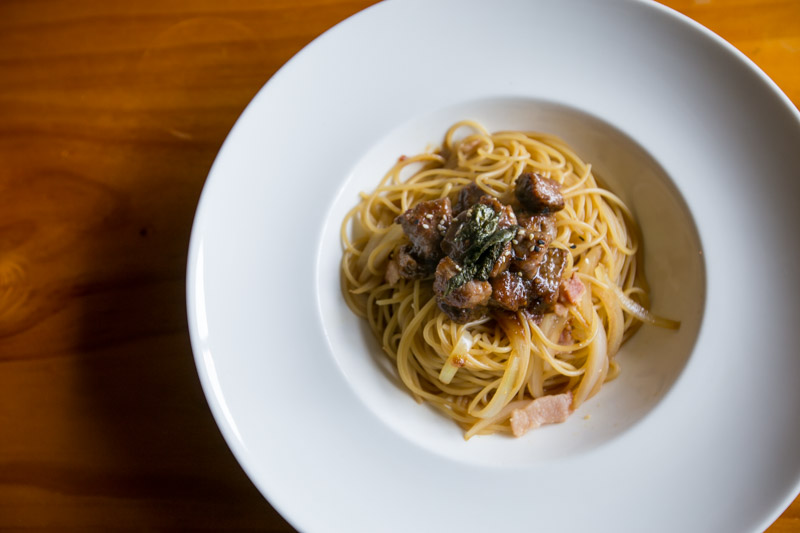 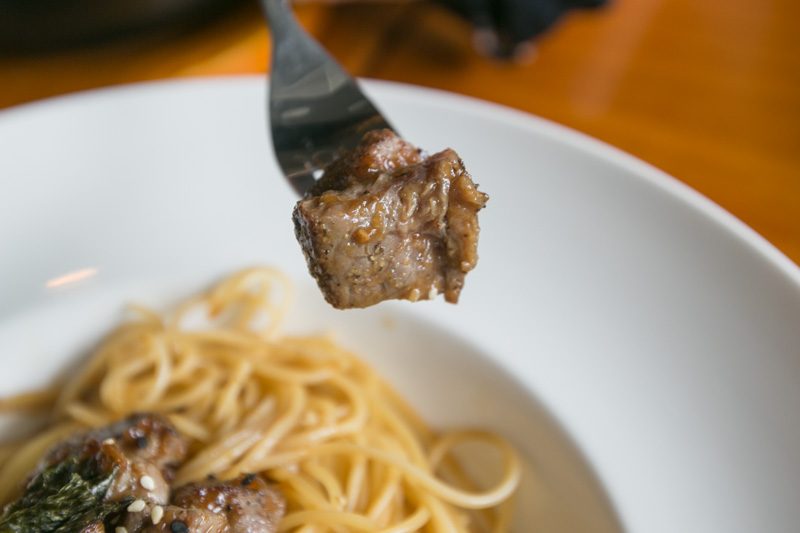 The spaghetti soaked up most of the chashu sauce rather quickly, so each strand was slightly sweet and tasted faintly of caramel.

I absolutely loved the tenderloin cubes. The beef cubes were tender and soft, and I bit through them with ease. Marinated and pan-fried with pepper, each beef cube was piquant and savoury.

I ended up eating every single piece of tenderloin but left the spaghetti as it was. My only gripe would be that the tenderloin cubes and spaghetti didn’t seem to gel together well. I’d have preferred having my tenderloin over a bowl of fluffy white Japanese rice and furikake. 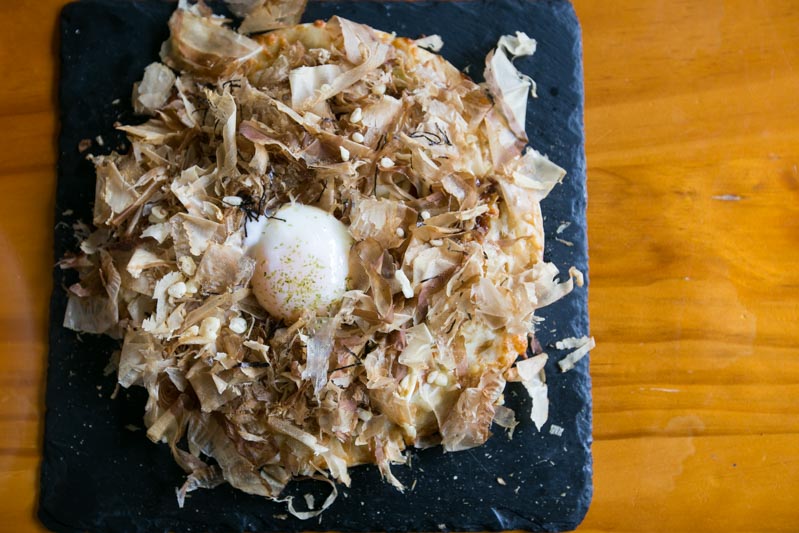 The Okonomiyaki Lava Pizza (S$16.90) came on an impressive black marble board. Underneath the generous amount of bonito flakes was grilled pork fillet and cabbage, and the entire pizza was drizzled in sweet okonomiyaki sauce and mayonnaise. 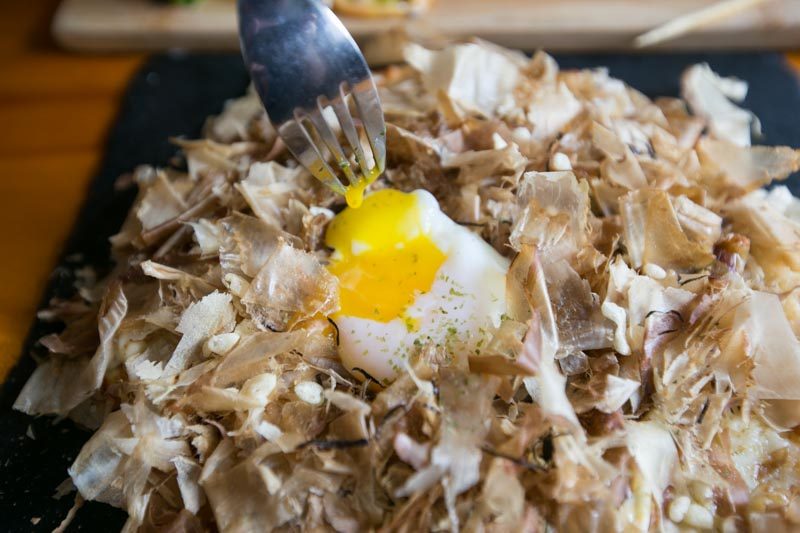 The pizza had also been topped with a soft onsen egg, and the runny egg yolk oozed out when I split it open with a fork. It was hard to coat each pizza slice with egg since the egg had been placed in the centre, and the egg didn’t seem to sit nicely with the pizza, so I ended up just leaving the egg as it is.

However, the rest of the pizza was actually pretty delicious. It was exactly as if you’d combine okonomiyaki with a pizza base — finger-licking, addictive and savoury.

The pizza crust was thin and more on the salty side, while the Japanese mayo was tangy and sweet. The little bits of cabbage were crunchy and fresh, and added a refreshing bite to the pizza. 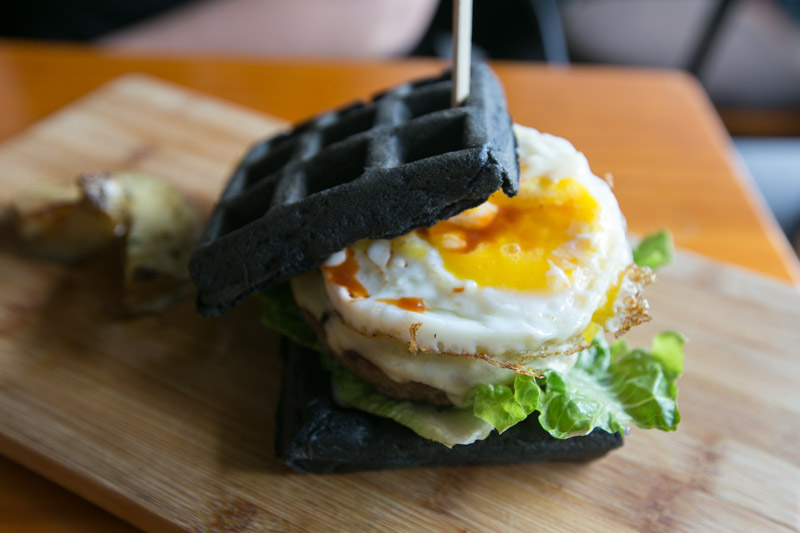 The Waffle Beef Burger (S$16.90) came with a twist — the waffle was charcoal black!

A thick and juicy beef patty was sandwiched between two slices of thick waffle, with cheese slices, mayonnaise, lettuce, onion and tomatoes. 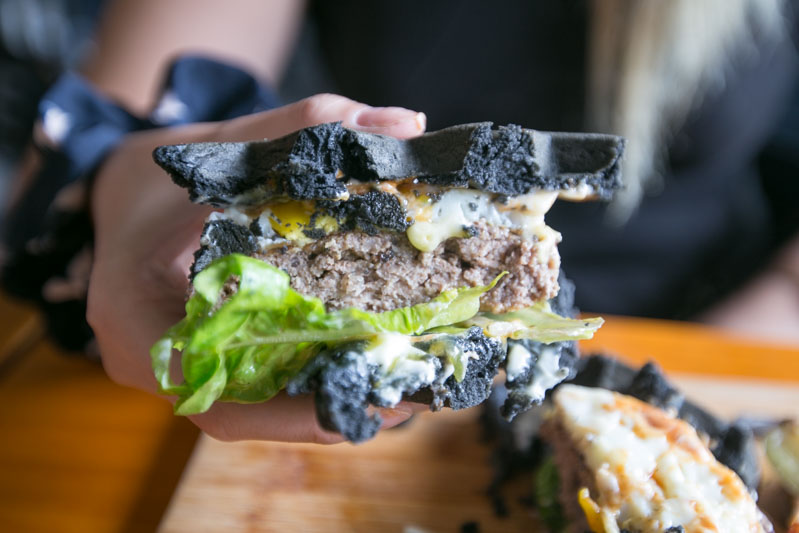 I absolutely loved how thick the burger was. We even had trouble lifting it with one hand!

The beef patty was definitely more on the cooked side, but considering its thickness, it would’ve definitely been a feat just to have the patty cooked thoroughly without overcooking it.

The waffle was dense to the extent that it almost resembled a brownie in texture. The batter had a honeyed sweetness to it, as if maple syrup had been added to the batter, which reminded me of pancakes and butter.

Because both the patty and waffle were thick and dense, I would recommend sharing this dish with a friend. I personally couldn’t finish this on my own and got full pretty quickly.

Miryoku Bistro is definitely trying to do something new and unique with its menu. I’ve never seen Japanese-Italian cuisine like this before and at such affordable prices to boot.

It boasts a wide variety of cuisines, dishes and flavours, but it might be a bit too overwhelming. As a result, it could be confusing to diners, whom I’d predict will take a long time to decide what they want to order.