There’s an element of je ne sais quoi behind a restaurant that’s helmed by a celebrated chef and has numerous outposts worldwide. In this case, Miznon Singapore has its claim to fame with Chef Eyal Shani and its first materialisation in 2010.

Having been a judge on MasterChef Israel an impressive six times, one would instantly assume this restaurant which specialises in Israeli street food dishes out plates of pita that are flawless, with relentless crowds that require little convincing.

The afternoon of my visit, the air at Miznon Singapore was electric with chatter and booming tunes. This was certainly partly due to the lunchtime buzz that’s synonymous with Telok Ayer, but it still required me time to ease into the frenzy of eager patrons waiting for tables and SDA officers surveying the place keenly.

I wanted to place no expectations on my lunch, even if I’d already caught wind of opinions from media colleagues, and as I exited my Grab car—flustered from a near-hit accident—it marked the moment for me to form my own judgement of this fashionable spot. Now, I’ve had the pleasure of enjoying a handful of char-grilled cauliflower steaks, with my latest lust for such an ingenious creation at LUMO. Safe to say, that bar is set pretty high and as I plunge my fork into Miznon’s medium-sized Baby Cauliflower Flower (S$16), I hold my breath just a little.

It’s softer than I’d anticipated and much of its visual char was missing in terms of taste. It would’ve worked better with a spiced rub as we are all familiar with the flat flavour of cauliflower on its own. At this point, I was secretly crossing toes that something else would invigorate faith in the sharing dishes laid before me. And so I moved on to the Intimate (S$24), a stew of beef short ribs, roots, tahini, onions, pickles, and chilli. The plating here leaves one guessing if they’d been served the right dishes, but we have to admit (and begrudgingly accept) that street food’s beauty is, after all, in its chaotic disarray.

Prodding around to find a balance of every element in the dish, I am still left unimpressed by a muddle of beef and tender vegetables. It is at this moment that someone at the table pointed out that the dish was, in fact, ‘aggressively underseasoned’—a fact I wouldn’t have dared to mutter, but I agreed wholly, nonetheless.

The reasoning behind this, I reckon, is to allow the ingredients to shine on their own, and as much as there is admiration in that philosophy, there is also value—and flavour—in hearty seasoning. 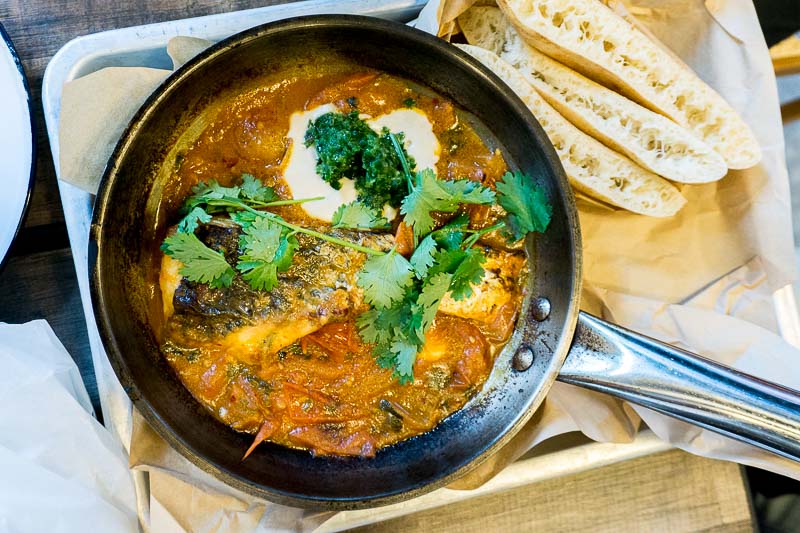 My disenchantment was fortunately shoved aside momentarily, all thanks to Hraime (S$26). There was salvation, yet, in this spicy Moroccan barramundi stew with tahini, chilli, and cilantro, especially with how satisfyingly flaky the fish was.

Much gratitude has to be extended to the sweet acidity of tomatoes, but not much else beyond a steadfast dish has got me comprehending the fame of Miznon thus far. In a final attempt to convince me otherwise, I ordered the Steak & Egg pita (S$21) laden with sour cream, tomato slices, onions, and Japanese cucumber. There’s a sloppy attempt to devour this with a semblance of lady-like etiquette but post-first bite, I throw inhibitions out and dive mouth-first.

Once I manage to locate the steak in this pillow, I’m met with, once again, savourless beef. Sure, it’s somewhat tender and aptly juicy, but there isn’t an ounce of seasoning that could make me comprehend why there is still a bustle of lunch-goers eager for a table. It’s 2020; even pitas need seasoning.

I do, however, commend their commitment to stuffing a pita to the brim. There is salvation yet, albeit brief.

Perhaps I’m spoilt by a palate that’s partial to heavy-handed recipes, or perhaps they were overwhelmed in the kitchen to ensure a tight ship. Unfortunately, they have not won a new patron in me.

It’s hard to believe when I say I was rooting for Miznon even before I had my first taste. The hype surrounding its entry into Singapore created a buzz of anticipation for this foodie, so one cannot say that I held rancour before even trying.

Granted, like all new F&B establishments, they probably need time to sort out teething issues before they can truly root themselves in the hearts of Singaporeans. For the rest who are still deciding if a visit is necessary, I say let some time pass, allow Miznon to simmer in feedback, and emerge seasoned.