Located along Haji Lane, Moosh is a Muslim-owned establishment which serves up affordable cups of soft serve in unique flavours. It may be slightly difficult to spot Moosh as its simple exterior hides among other shops along Haji Lane with more elaborately designed store fronts. Just look out for the boards out front featuring pictures of the soft serve creations and you’re sorted. 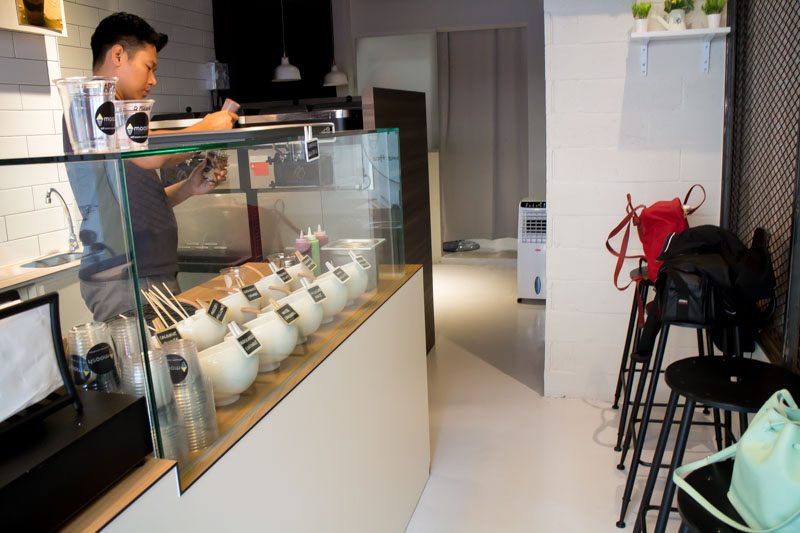 Moosh is mainly takeout-based as the shop itself doesn’t have that much space for proper seating, save for a few high stools for when you’re waiting for your order to be served. The soft serve is assembled behind a large glass divider, so you can fully appreciate every step taken to create the dessert masterpiece.

Soft serve concoctions from the establishment come in two sizes: Regular and Large. Starting from March 2018 onwards, soft serve in cones, and Kurtos (Hungarian chimney-shaped cones) will be introduced, so be sure to look out for those too. 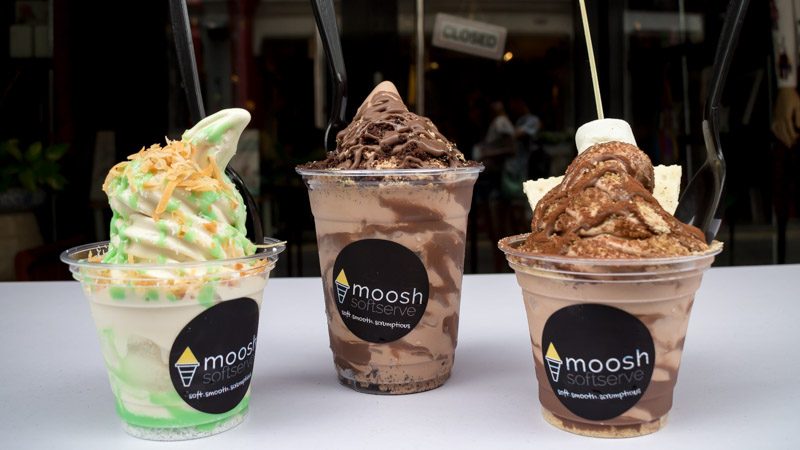 We were the most intrigued by the Ondeh Ondeh, Nutella Brownie Cheesecake, and Smore flavours, so we got one of each. In addition to those, Moosh also sells flavours such as Apple Crumble (Regular: $4.50, Large: $6) and Strawberry Cheesecake (Regular: $4, Large: $5.50). 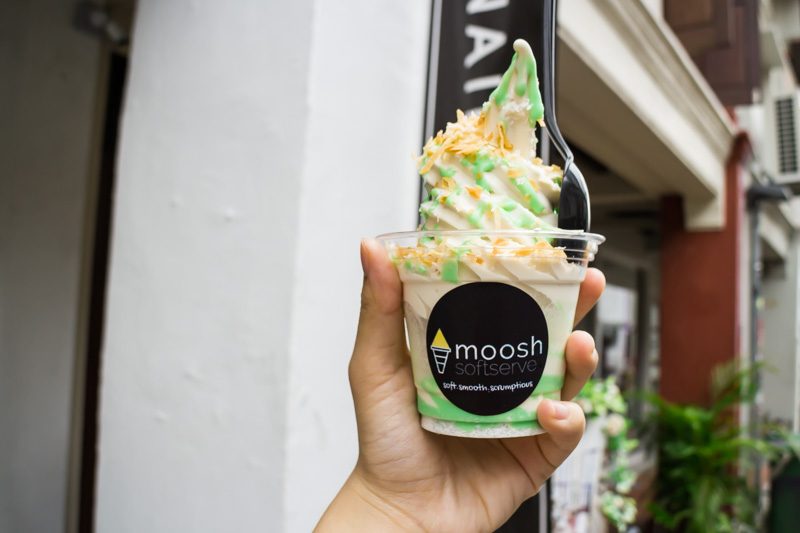 The gula melaka soft serve was ever so slightly salty, with the distinct fragrance of the palm sugar. The soft serve was smooth and creamy and melted quite quickly, but that didn’t bother us as we polished ours off in a jiffy. 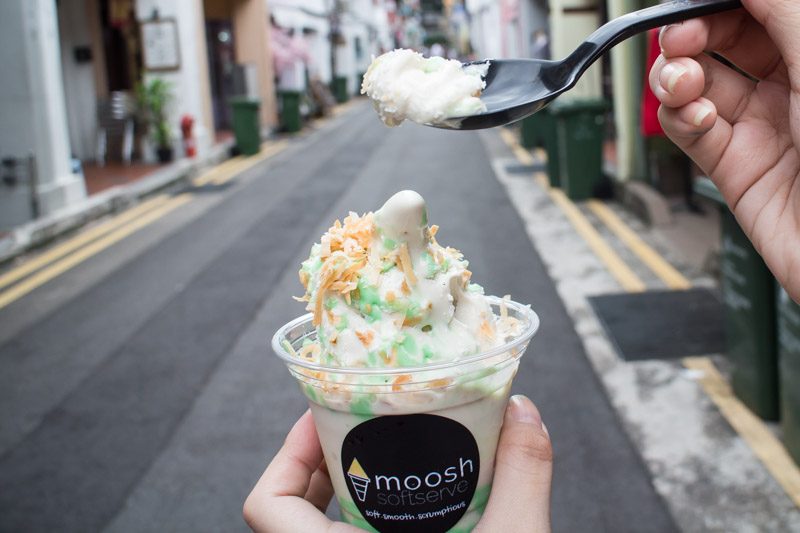 The desiccated coconut and coconut flakes also gave the dessert a crunch which complemented the creamy soft serve. It made the soft serve taste even more like Ondeh Ondeh.

There was desiccated coconut at the bottom of the cup as well, so the Ondeh Ondeh experience didn’t end right after the first few bites.

The pandan fudge drizzled on top and around the soft serve was fragrant, and the taste was reminiscent of condensed milk. One would think that the combination would be too sweet, but it was just right and wasn’t cloying at all. The soft serve used was a chocolate soft serve which had cream cheese added to it. The ice cream itself was very rich, and although the cheese flavour was very subtle, it was definitely discernible. 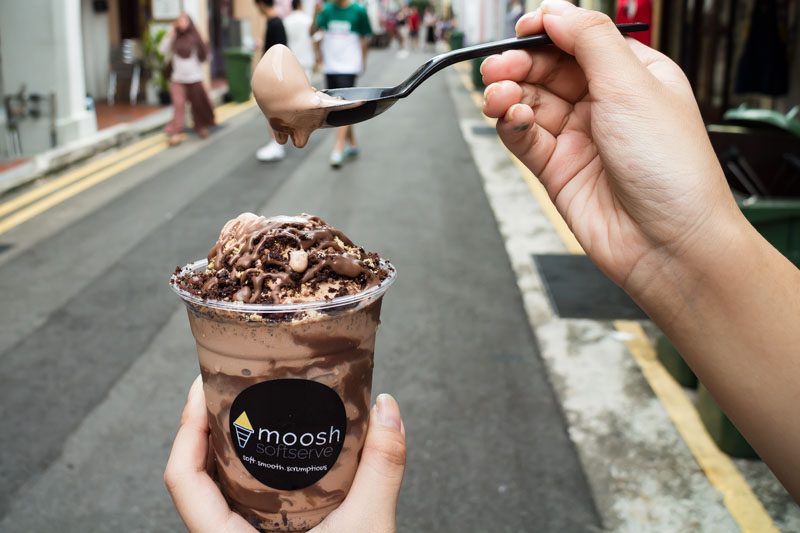 We found the brownie crumbs to be the best topping amongst those that we tried, as the brownie itself wasn’t too rich and sweet, and became delightfully chewy when it absorbed the melted soft serve.

The Nutella fudge stayed true to its name, boasting that iconic hazelnut flavour. The staff were extremely generous with the fudge, so you won’t have to worry about running out. 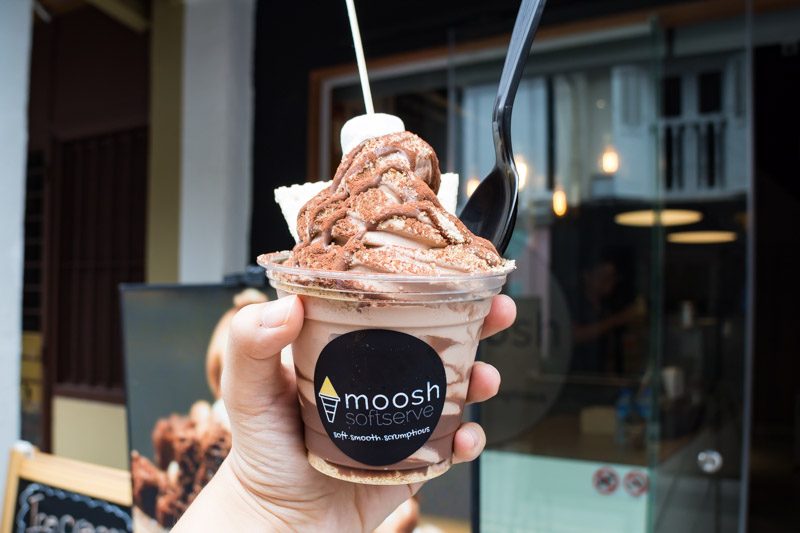 We were taken aback slightly when the person whipped out a torch and started to melt the marshmallows on the spot – winning! The resulting marshmallows were soft and gooey on the inside with a slightly crunchy outer shell, which was a nice surprise as they did not look very toasted at all.

Both the Nutella Brownie Cheesecake and Smore flavours use the same soft serve; which one you get depends on whether you want the gooey marshmallows or the chewy brownie bits. 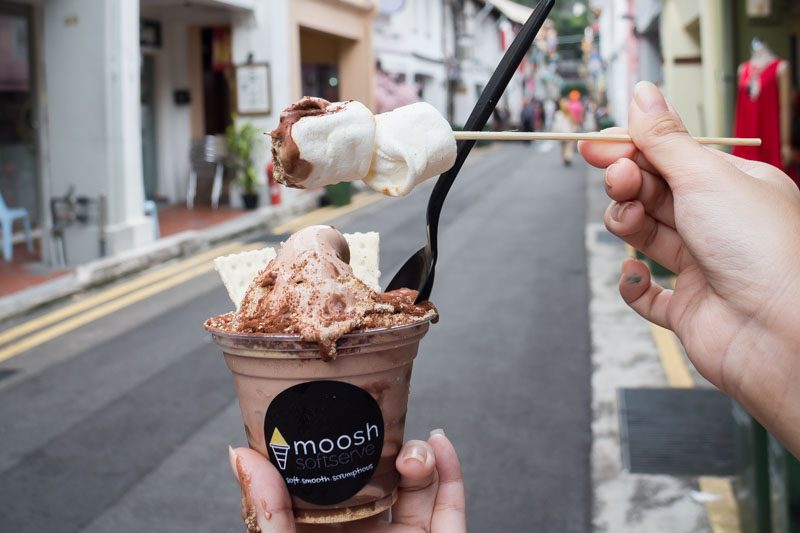 Be careful with this one though, as the hot marshmallows will melt your soft serve in no time so if you want to take pictures for the ‘gram, you’ll have to do so quickly.

The crunchy components of the soft serve – mainly the digestive biscuit crumbs and white crackers – were both a little bit salty, which went well with the soft serve. This combo was super addictive, and before we knew it, it was gone.

The servings at Moosh were generous, making the soft serve creations good value for money. The next time you’re around Bugis, seek out Moosh to get some relief from the Singapore heat. Martin Zwerts: Famous Fries From The Netherlands With Interesting Sauces In...