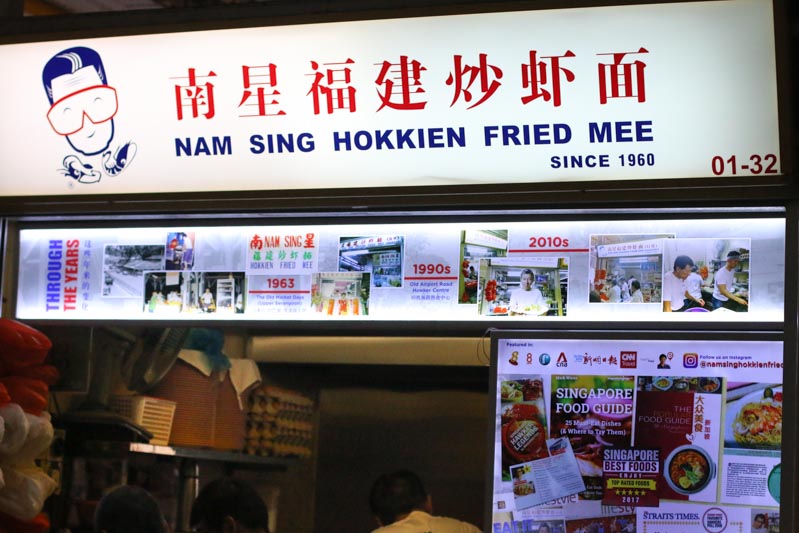 I’m sure Nam Sing Hokkien Fried Mee is a familiar name to anyone who frequents Old Airport Road Food Centre. Established since 1960, this local favourite has been covered by many news outlets, including Channel 8, Channel U and Channel News Asia. 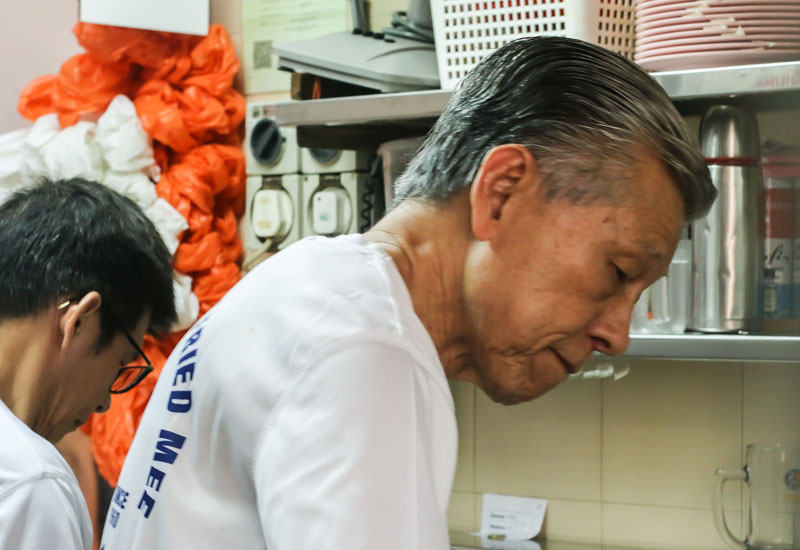 The stall is skilfully managed by Mr Ng Hock Wah, who is still frying up plates of Hokkien mee swiftly at the age of 72 years old. Coming from a family background with rich culinary experience, Mr Ng Hock Wah took over the stall from former owner Mr Ng Tong when he passed away. Having helped his dad at the stall since he was 18, it’s no wonder he has an abundance of knowledge about the craft.

Mr Ng Tong and his older brother, Mr Ng Seng, started out as coolies at Rochor Road in the 1940s. Frying up noodles on a charcoal stove together for supper after work, they began adding various ingredients like prawn and squid into the mix.

The business opportunities that came with their skills were bountiful—Mr Ng Seng opened a stall selling the famous “Rochor mee” at Rochor Road, while Mr Ng Tong opened his in front of Tong Ji Medical Hall in the vicinity of Eu Tong Sen Road. They met with a ton of success and the rest was history.

The “Nam Sing” brand came about from the coffeeshop by Florence Road back when Mr Ng Hock Wah set up his stall by the roadside when he first started out. After the government started issuing hawker licenses in the 1960s, he moved to Simon Road wet market till the 1990s when he finally settled down at Old Airport Road where you can find him today. 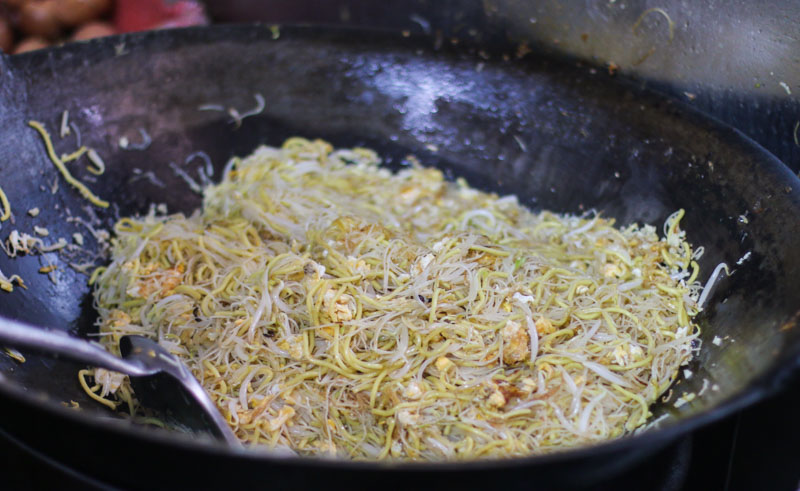 While Mr Ng was cooking, I had the privilege of having a chat with him. Speaking only in Mandarin, he recalled how times were tough and how he didn’t expect the stall to do so well.

Even though he’s extremely passionate about cooking, he unexpectedly urged me to reach greater heights with my education so I don’t end up like him. It’s not that he doesn’t like his job, but he hinted that things might have been different if he had a better education when he was younger. I had the pleasure of watching as Mr Ng whipped up countless plates of Hokkien mee like clockwork. I must say, I’m not surprised that he has been cooking for over 50 years after seeing him work so fast! 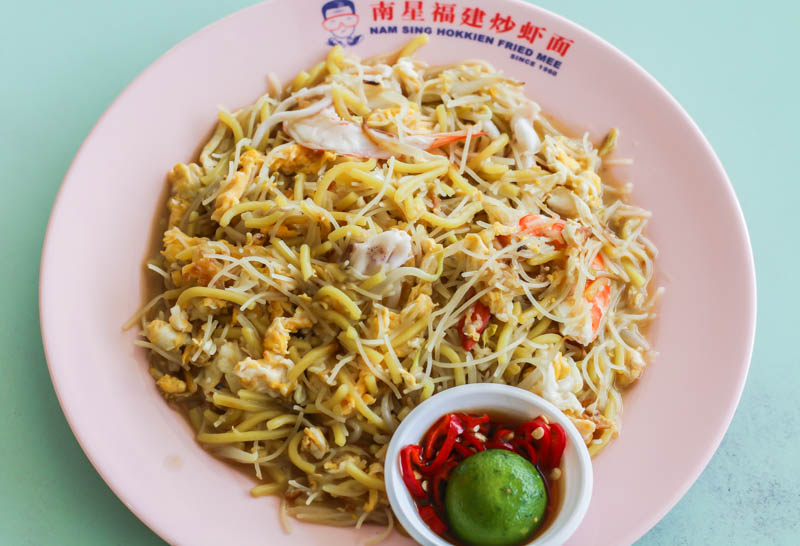 I ordered a small plate of Hokkien mee, which costs S$5. A more traditional take on Hokkien mee, this plate was a drier version than I’m usually accustomed to. The reason behind that is so the noodles would fully absorb all the flavour, making it more fragrant.

It came with a mix of bee hoon and yellow noodles, which  I found odd because I typically eat Hokkien mee with rice noodles instead of bee hoon. I learnt that including bee hoon was the more traditional way it was eaten in the old days.

Instead of the usual sambal belacan, Nam Sing Hokkien Fried Mee uses cut chilli padi on the side so as not to ruin the flavour of the noodles. 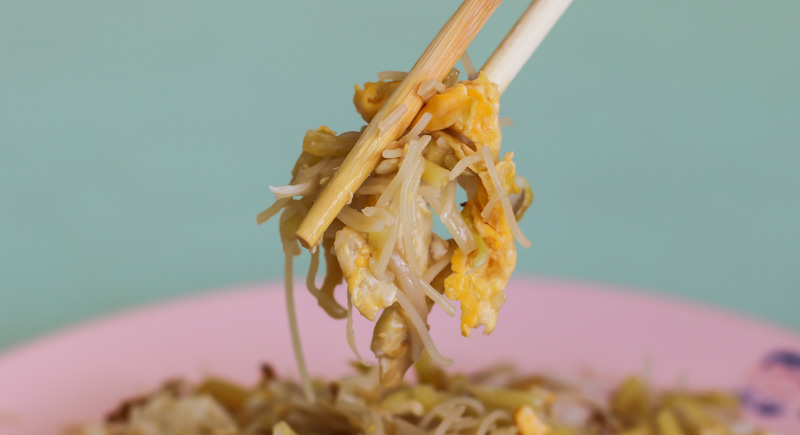 At first bite, I noticed that the noodles were full of flavour and it was perfectly charred, adding the fragrant aroma of wok hei. The eggs came in slightly bigger chunks than I was used to and I found that suited to my preference more. 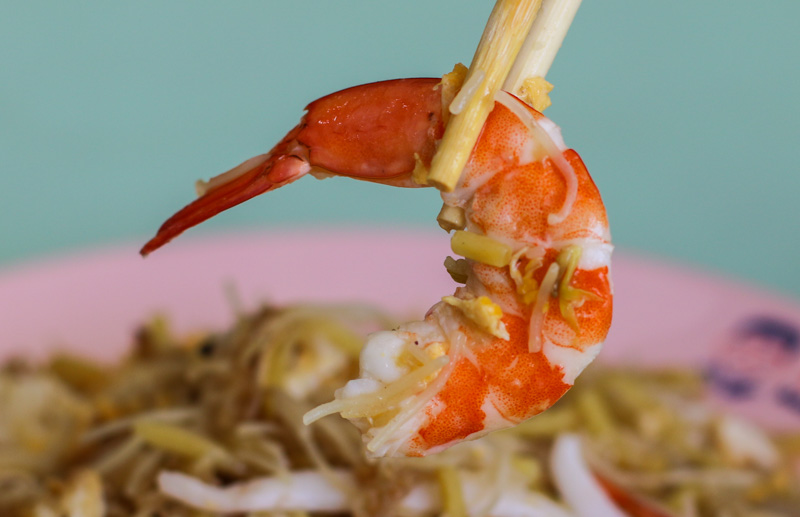 The prawns were medium-sized and very fresh. Stir-fried together in the gravy, it managed to absorb the flavours beautifully. I loved how I could still taste the essence of the prawn amidst the wok hei. 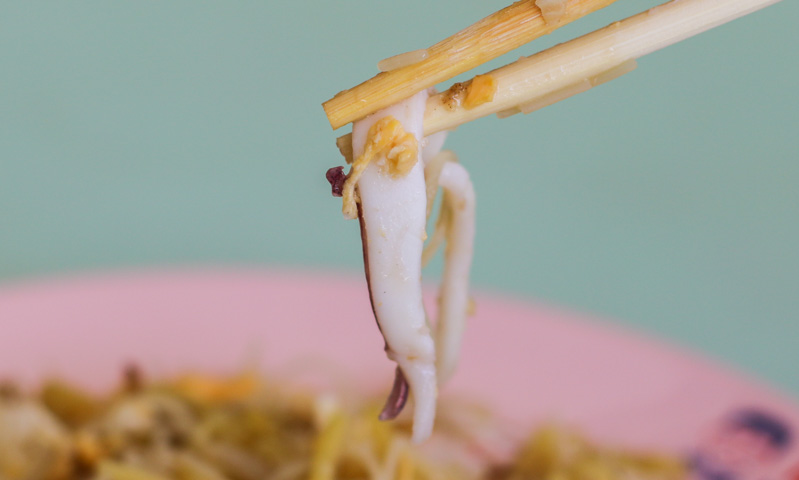 Small pieces of sotong were also tossed into the mix, and they complemented the dish amazingly. Chewy and springy, the sotong didn’t overpower the dish, which made it absolutely perfect.

The thing I loved most about this plate of Hokkien mee was that it was not cloying at all, and it was so well-balanced. It’s hard to find dishes like that these days, which is why Nam Sing Hokkien Fried Mee exceeded all my expectations.

I highly recommend this to anyone who can’t decide what to eat at Old Airport Food Centre. Head down early, because long queues start to form during lunch hour. The Hokkien mee typically sells out by 2pm – 3pm, so if you’re thinking of checking it out, it might be best to go at around 11.30am.

This single plate of Hokkien mee checked all the boxes for me. A light, well-balanced meal made by an expert in his field—I couldn’t find a single thing I didn’t like about it. Some say Nam Sing Hokkien Fried Mee is the best Hokkien mee in Singapore, and I can definitely attest to that. What about you?