Woohoo! I finally did it! After 4 visits to Geylang Bahru Market and Food Centre, I finally managed to find Hui Wei Chilli Ban Mian open. That wasn’t the end of my adventure, though— there were still about 10 people ahead of me in the queue. I settled in and watched the action at the stall. The first thing that caught my eye was the noodle machine on one side behind the counter. It was whirring away as the lady hawker worked a sheet of noodles perhaps 1 foot wide and many, many metres long into the feeder at the top. They were dancing out the other side in the familiar narrow noodle dimensions we know. Fascinating to see it being done by hand right in front of me!

Another thing I noticed was the “Since 1996” tagline under the Hui Wei Chilli Ban Mian logo. Over a quarter of a century in the business, huh? That was both an achievement in itself and a testament to the quality of their food. Geez, why was the queue taking so long?!

15 minutes later, I was at the front, ready with my order.

What I tried at Hui Wei Chilli Ban Mian I asked for the Signature Chilli Ban Mian (S$4.50 for small, S$6.50 for large) and chose the smaller bowl. Despite that, the serving seemed to be pretty substantial when it arrived. More than that, though, it was gorgeous! I’ll try to describe it but the pictures do it so much more justice. You get a sense of it from the ‘grainy’ texture of the ingredients, especially the dangerous-looking mass of red-brown chilli in its corner. There were 2 meatballs, glistening in a light sheen. Minced pork and pork lard occupied the space next to it, wonderfully deep brown. Lighter brown ikan bilis were scattered over the entire surface, promising a savoury crunch. Smooth, brilliant white and yellow, the egg looked so inviting.

A smattering of green shallots completed the top layer. Below it all, the flat ban mian lay soaking up the deep, rich-looking sauce.

I wish there was some way I could convey the heavenly aroma wafting from the bowl. The fragrant chilli, shallots, cooked meat and sauce combined to create an exquisite scent that makes me salivate as I write this. I pulled a mass of noodles up and they came coated in the sweet, dark sauce, a sight that made me want to gobble it all down at once. 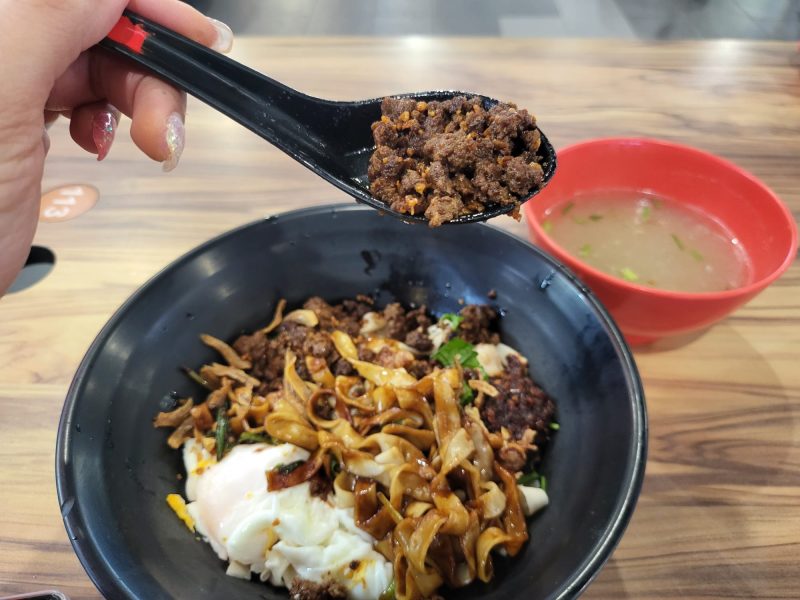 I composed myself and carefully added some of the minced pork, pork lard and chilli onto my spoon.

Man, that first mouthful was so good. Softness from the mince. Crispiness from the lard. Spicy, sour, savoury and sweet contributions from the chilli. And, around it all, the perfectly-done ban mian soaking up everything and giving it harmony and balance.

For my next bite, I had meatball, ikan bilis, egg and, of course, the chilli. My meatball had soaked up some of the dark sauce and was already smeared with chilli. Can you imagine the rush of flavours that it released when I bit in? It was made even more pleasurable by the crunch of the ikan bilis and the creamy egg yolk. Just… wow! I’m no great chilli eater so Hui Wei Ban Mian’s version hit me hard, but I pushed on (in a sweat) as the dish was too good not to be finished. If you’re up for something incredibly spicy, this bowl is for you!

I’d almost forgotten that the dish is served with a bowl of soup, too. Venturing a sip, I found the soup to be peppery and a bit thicker than I have tasted elsewhere. Fine on its own, yes, but definitely playing second fiddle to the star performer that was my main bowl.

I was ready to give up on Hui Wei Ban Mian after seeing it closed the first couple of times I visited. After tasting the food, I breathed a huge sigh of relief that I had persisted. Their handmade noodles really do stand apart. Meanwhile, the chilli recipe is just perfect. They know how to handle proportions very well— spicy, savoury, sweet and even sour each add their dimension in just the right amounts. Then, there’s the contrast between crunchy, form and soft textures. What a heady mix!

The people experience is so important and the couple at the Hui Wei Ban Mian stall are really wonderful. One thing I want to add is that the parking at this food centre is very limited and the carpark itself is quite cramped, meaning you may struggle with reverse parking. If you can, take public transport. Regardless, you should make your way down to Hui Wei Chilli Ban Mian.