NOKA: Omakase Dining That Will Make You Go “Omagosh” At Funan Mall

Sister restaurant to Open Farm Community, NOKA is located right beside the Urban Farm at the new and revamped Funan Mall. If it’s your first time there, you may not know that you’ll have to take the lift at Lobby A to the seventh floor. Once you step out of the lift, you’ll immediately be greeted with the entrance of this brightly-lit Japanese restaurant. The entrance leads you further into the restaurant where there are more seats available. 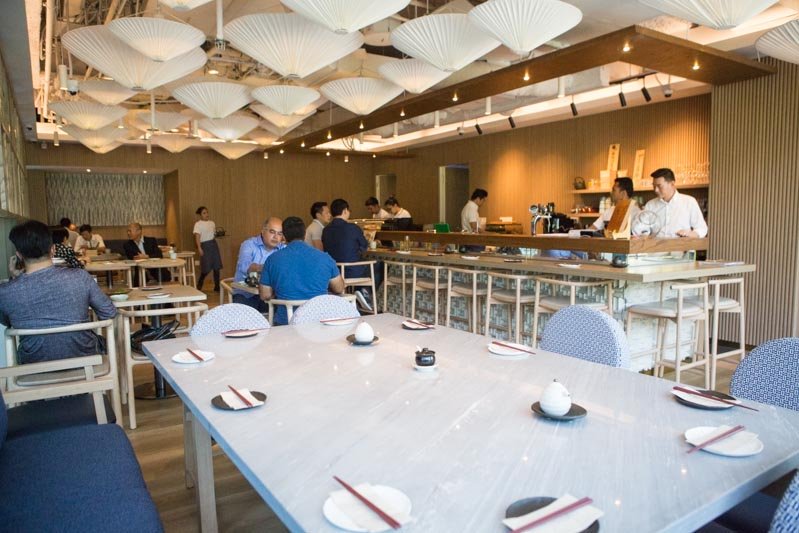 For a more intimate dining session, there are counter seats with a clear view of the kitchen where you can interact with the chefs as well. The 75-seater restaurant adopts a farm-to-table dining concept that utilises fresh produce that is delivered every Tuesday, Wednesday, Friday and Saturday, to ensure the quality of the ingredients. Some of the fresh produce that they use is actually straight from the Urban Farm on the rooftop garden of Funan Mall. They also own two other gardens, one at Dempsey and another at Jalan Penjara in Queenstown which is actually also where they get their main stock.

We were lucky enough to visit on their delivery day, when they were restocking their fresh produce. 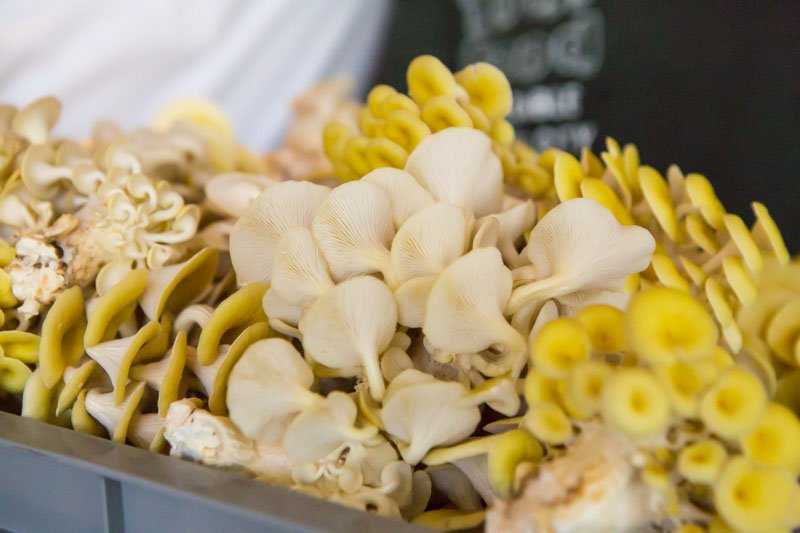 At NOKA, you’ll get to enjoy omakase dining, where you’ll entrust the chef to choose the seasonal ingredients at hand and present dishes to you. Your meal will be a surprise!

This is especially fun for people who are always unable to decide what they want to get from the menu. 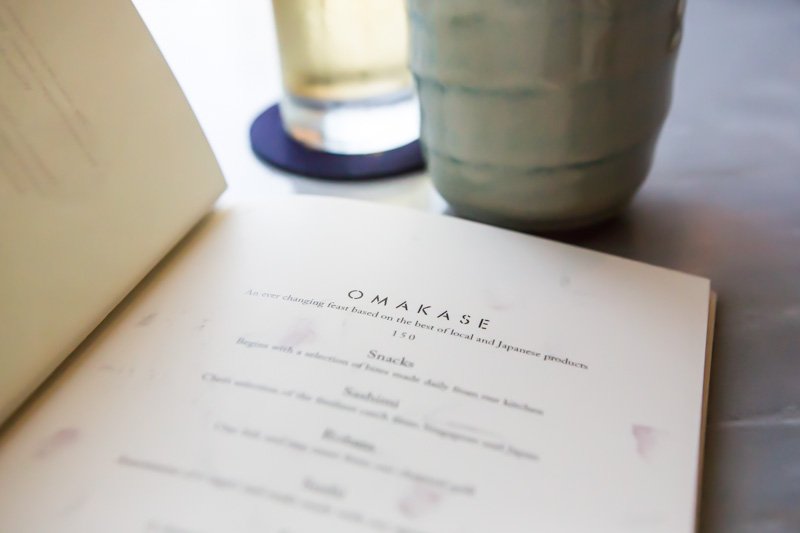 The Omakase (S$150++) is a six-course meal that includes Snacks, Sashimi, Robata, Sushi, Soup and Sweet, and each dish is skillfully prepared by the chefs. 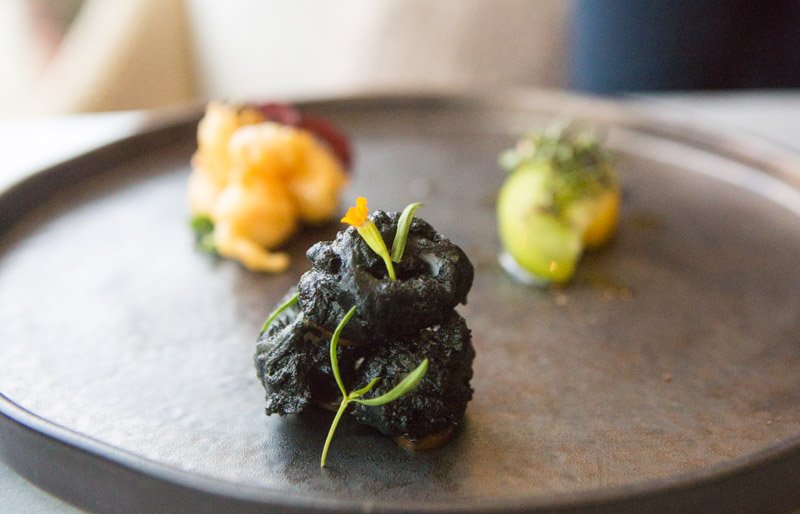 The Omakase started with a selection of bites, made daily in their kitchen. Our snack platter consisted of black calamari, prawns fried tempura style, and some organic oxheart tomatoes with Hokkaido spinach.

The deep-fried squid ink calamari came in a squid ink batter shell, with a hint of smoky flavour and a slight crunch to it. Luckily, the calamari was fresh and definitely not rubbery, so it only needed minimal jaw-work. 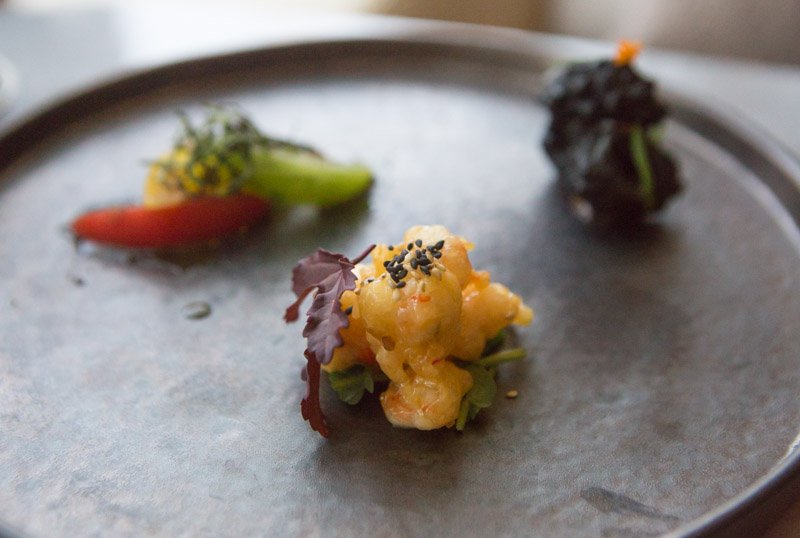 As we bit into the tempura prawns, we could hear an audible crunch. Taste-wise, the tempura batter was buttery and savoury unlike the usual kind, and we unanimously agreed that it was one of the best tempura dishes that we’ve had.

After crunching through the dishes, we mixed it up with the soft and juicy tomatoes. Even though I don’t usually eat tomatoes, I enjoyed the tomatoes here as they were super fresh with only a slight hint of tanginess. The chef selects the sashimi from the freshest catch from Singapore and Japan. When we visited, we were served the Kanpachi Carpaccio which was dressed in truffle oil. It was topped with blue pea flower, dogfennel, love chain which contains antioxidants and dried sea kelp. The colours from the flowers showed a good visually pleasing contrast to the dish. As mentioned, truffle oil was present in this dish though the taste of truffle didn’t overpower the other components of the dish. As I watched Chef Seki Takuma prepare the next dish, I was amazed by the intricacy and effort put into assembling the plat du jour (a dish specially prepared by a restaurant on a particular day, in addition to the usual menu.) 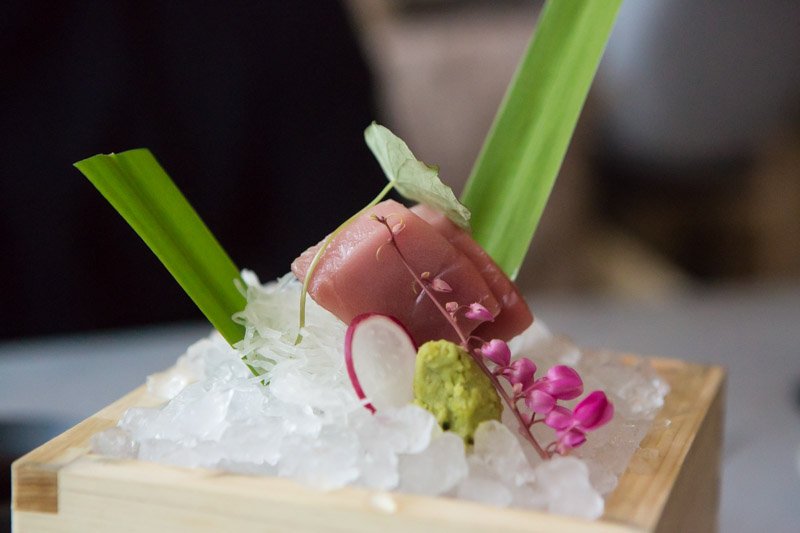 Presented with a stem of their home-grown wasabi leaf, the Tuna Sashimi was indeed delicious. The tuna slices had a butter-like texture that melted easily in my mouth. 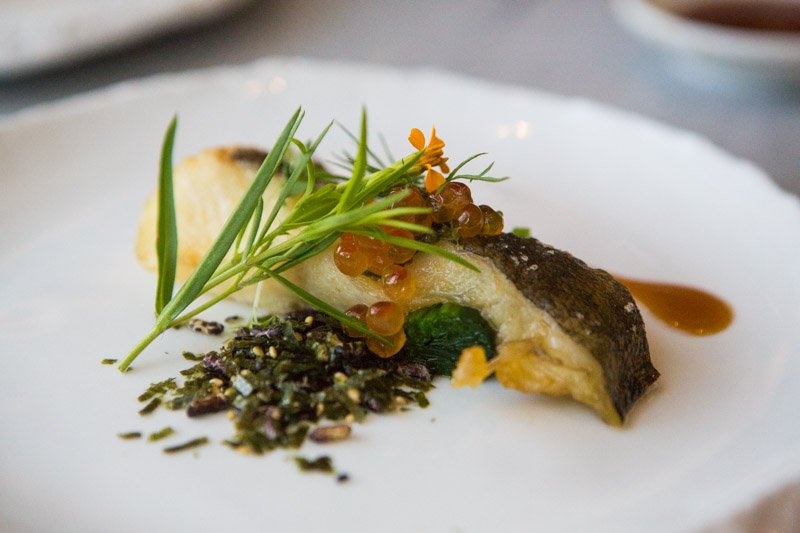 The Robata included in NOKA’s Omakase comprises one fish and one meat, both cooked over a hot charcoal grill.

We were served a grilled codfish with a mixture of seaweed and dehydrated rice, fresh salmon, sea grapes, steamed kale, sesame dip and then topped with Mexican tarragon and dill. 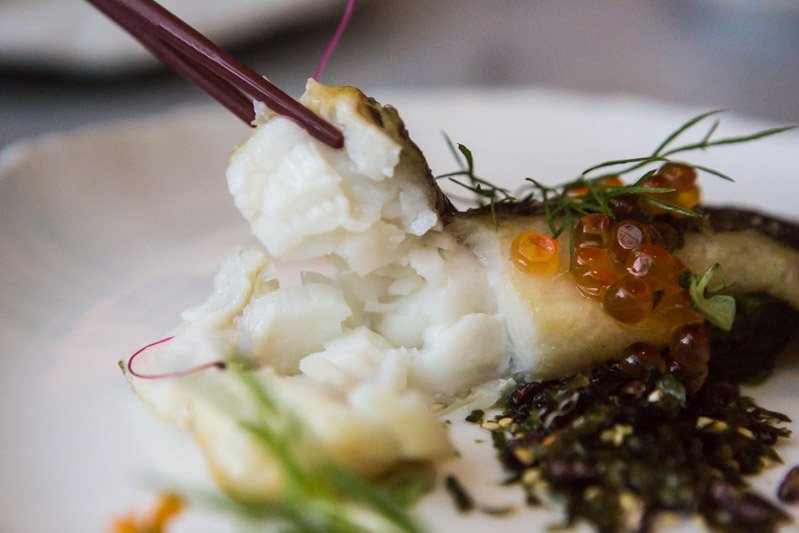 I can’t emphasise enough on the freshness of their ingredients. The cod was perfectly cooked, with flaky juicy meat, and I simply couldn’t get enough of the perfectly-seared outer layer! 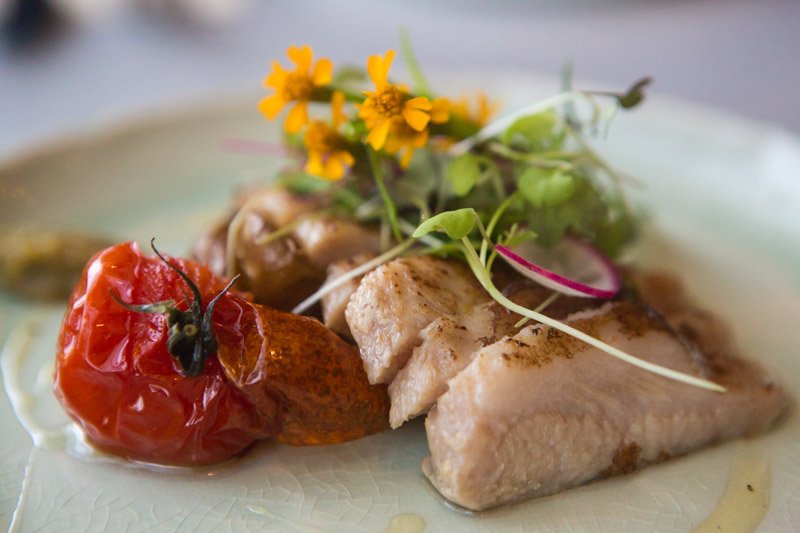 The Koji Ton-Toro was the next dish, which can also be found on their permanent menu for S$38. Garnished with Mexican tarragon, radish, roasted potatoes and tomato, this pork jowl dish has all the nutrition you’ll need on a plate. 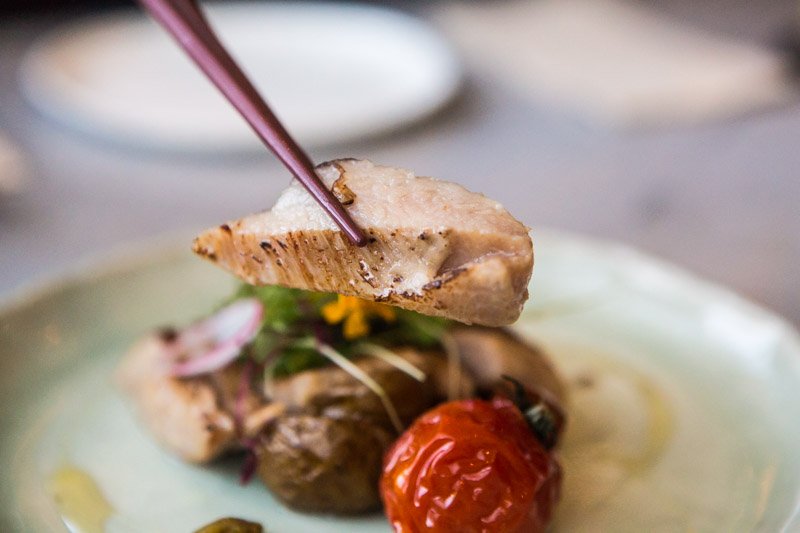 We were told that the pork jowl had been marinated in Sake thus the succulency of the meat. Together with the yuzu pepper paste that’s also served on the side, the Koji Ton-Toro was simply gastronomical. 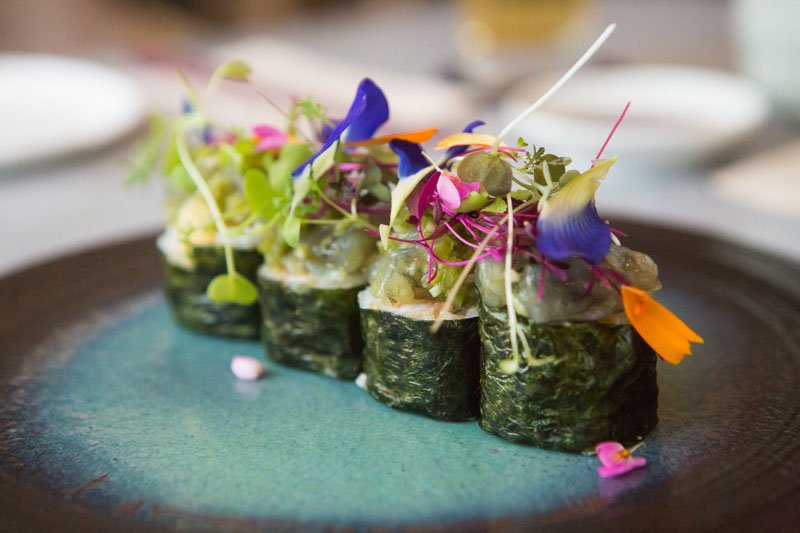 NOKA served an assortment of six Nigiri and Maki, made with their signature Niigata rice. At first glance, it seemed like this sushi dish only came with raw Apollo prawns (that were locally-farmed). However, there are actually fried prawns wrapped in the Makis too. This gave the dish a different texture and added more dimension to it. Before we dug in, the staff brought out a tassel spray atomizer that was filled with some Koshijino Kobai. This sake from Niigata is 55% polished, giving the dish a less sharp taste.

At the same time, it enhanced the flavour of the dish and added a slightly sweet flavour to it. If you’d like a taste of the sake on its own, the Koshijino Kobai is also available on the menu at S$105 for 720ml. 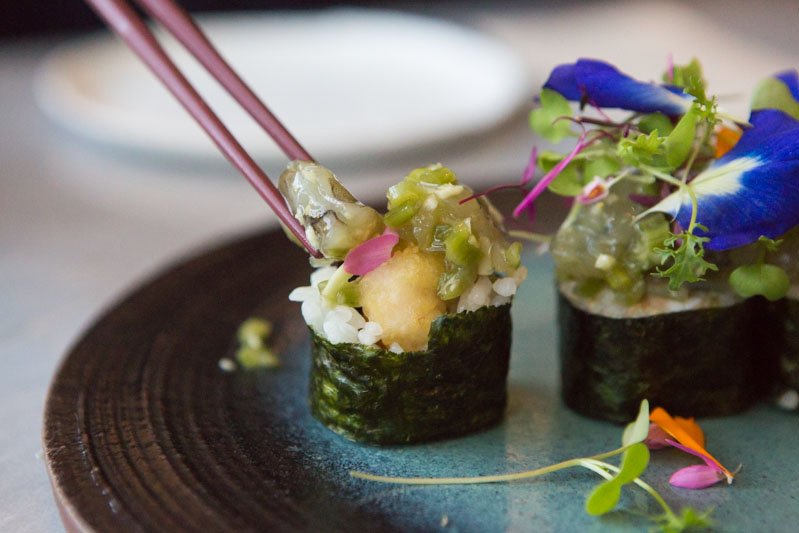 The tempura-style prawns were similar to the prawns we tried from the first course. The faint sweetness from the buttery batter brought out the fresh taste of wasabi which they’ve garnished on top of the dish. This dressed-to-the-nines Snow-Aged Wagyu Nigiri is made with Koshihikari rice, a type of rice from Niigata, and crowned with Ponzu radish along with some locally grown herbs. Even before I visited NOKA, I’ve seen this dish pop up a lot while I was scrolling on Instagram so I was very excited to try it. 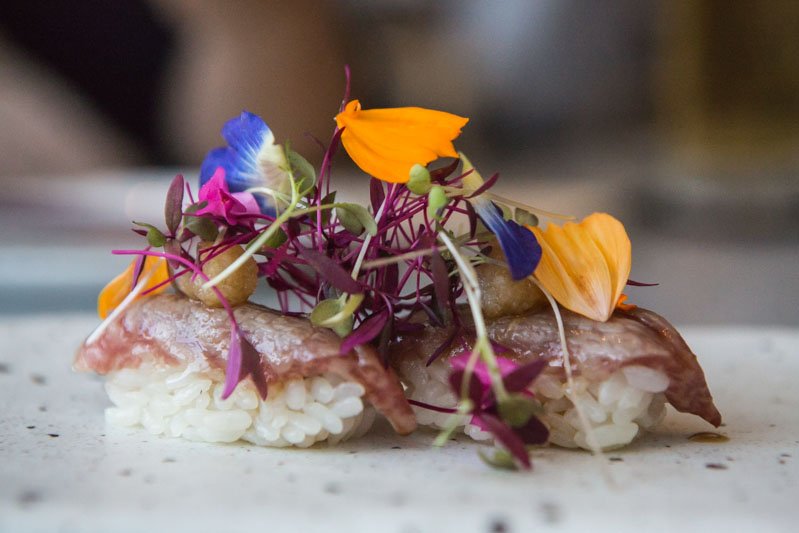 We’ve heard that it wasn’t an easy task to achieve such luscious Wagyu. The beef has to stay in the snow for 30 days in Niigata to start the ageing process. 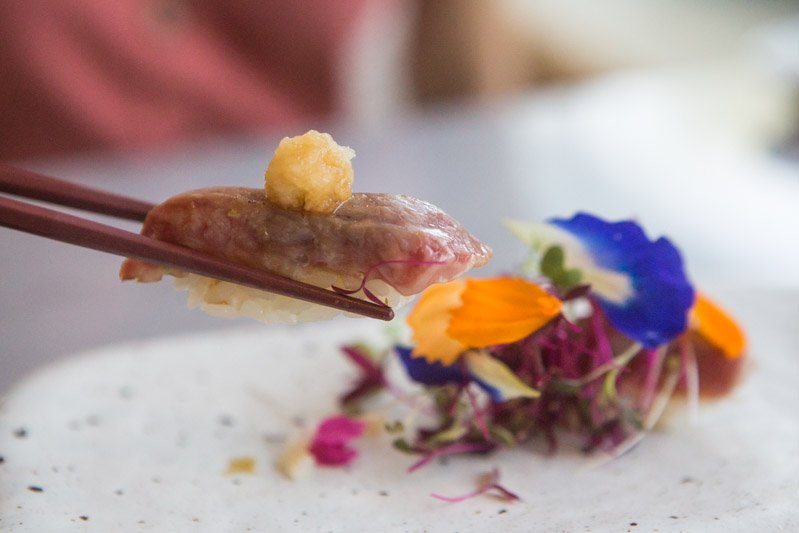 This renders a deeper umami flavour while the rich marbling and sublime tenderness deliver a silkier texture. Even though it looks very resplendent, I’ve got to admit that there could be fewer herbs in order for the taste of the Wagyu to fully shine through. 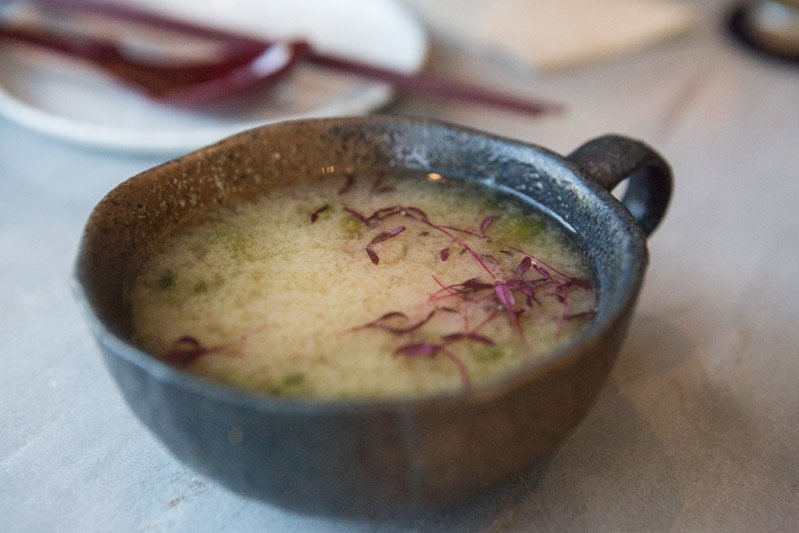 To wash down all the savoury flavours from the previous dishes before dessert, we were given a hot bowl of Miso Soup. 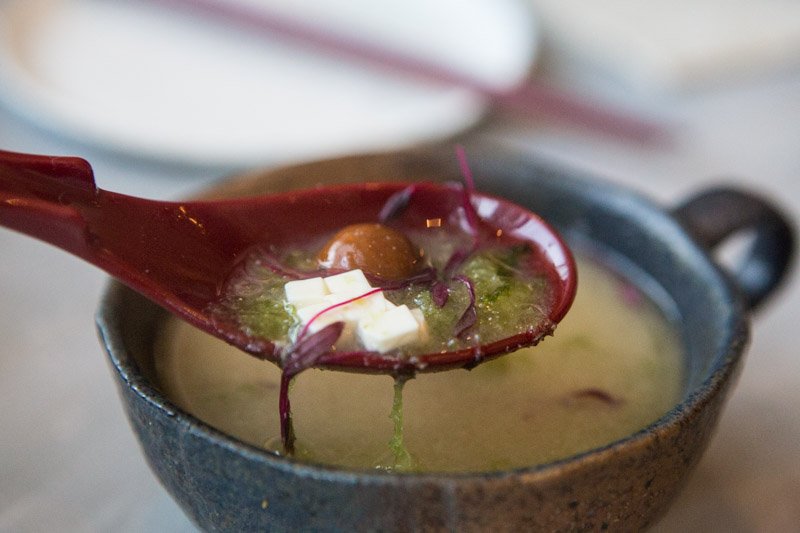 The warm and comforting bowl of soup helped to clear our palates and it left us feeling more refreshed. 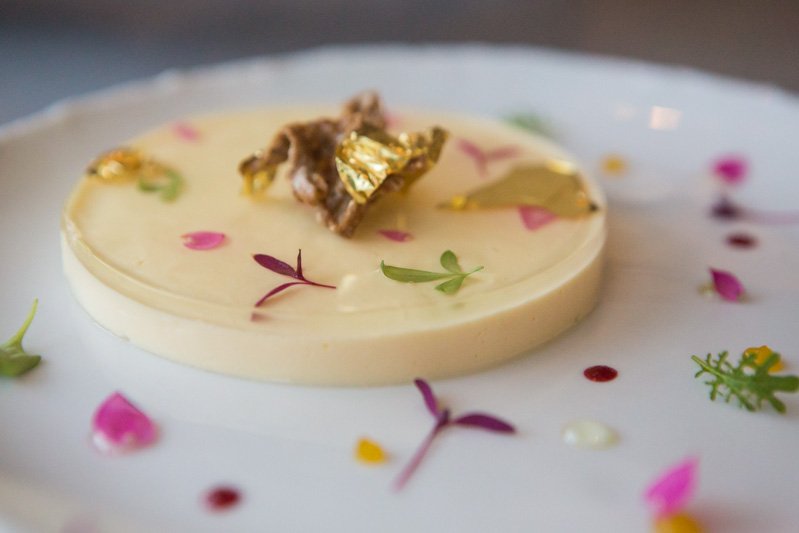 Last but not least, dessert was served. This refined and dainty-looking dessert is a Yuzu Mousse decorated with some gold leaves, herbs and dotted with fruity puree. 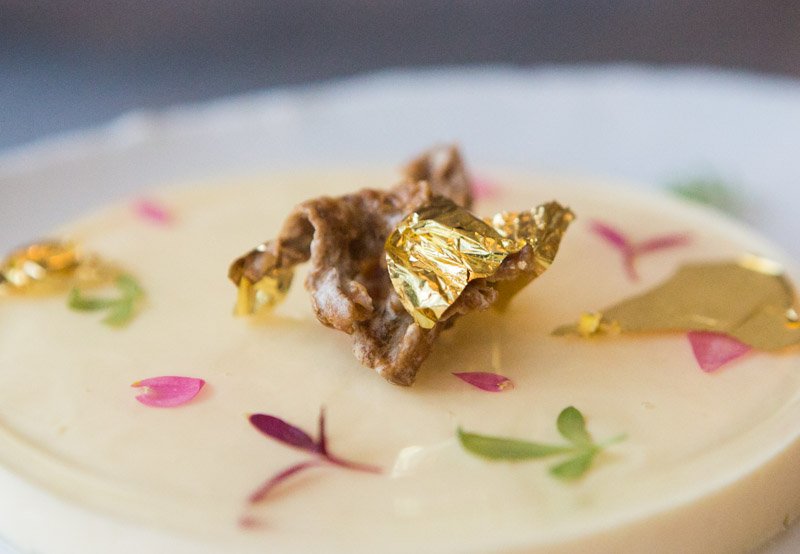 A home-grown mushroom lies atop this Yuzu Mousse. To make this dessert, the Chef explained that the mushroom had to be caramelised in a sugar-coating first before dehumidifying it. Even with their dessert, they tried to incorporate the garden-to-table concept which is pretty uncommon in Singapore. Each bite of this tart was smooth and creamy — it felt like a cloud in my mouth.

Though adding a mushroom to a dessert is a bold move, the caramelised mushroom paired well with the citrusy flavour of the yuzu. Besides the light flavour, the crunch from the mushroom also added an interesting element to the soft dessert. 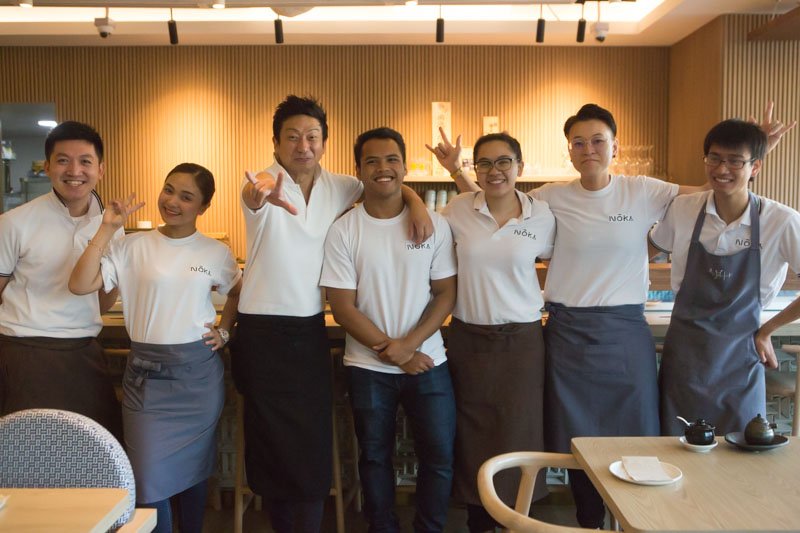 Throughout our dining experience at NOKA, the friendly staff explained each dish and its components to us as they serve them and they ensured that all our needs are met.

Their impeccable service left us smiling as we walked out of the restaurant.

I would definitely be back for more. Even though the price point is a little steep for a “mystery” meal, I’d like to see it as a gamble that pays off.

So for the brave and adventurous who feel like splurging or if you want to celebrate a special occasion, I would highly recommend this place.

The best part is that they also have gluten-free, vegan and vegetarian options on their menu! Who’s ready to be surprised?