NUVO Kitchen + Bar: Contemporary Japanese Italian by the Bay with 1-for-1 mains

NUVO returns with a new venue by the bay. And, their venue isn’t the only thing that’s new. With their menu including a super wide repertoire of cocktails – classic and bespoke, and multiple ingenius tapas dishes, it seems like quite a place to chill out after work. Not to mention, a killer view of the sunset and night helps calm your busy wearied souls. The view from NUVO during day time is pretty damn gorgeous too. Many patrons who visit during lunch hours are usually from the CBD and they enjoy dining al fresco to enjoy the view. If a steam cake and foccacia had a lovechild, this would be it.

The texture was much more like steamed cake than bread to me, so it was too soft for my personal liking. 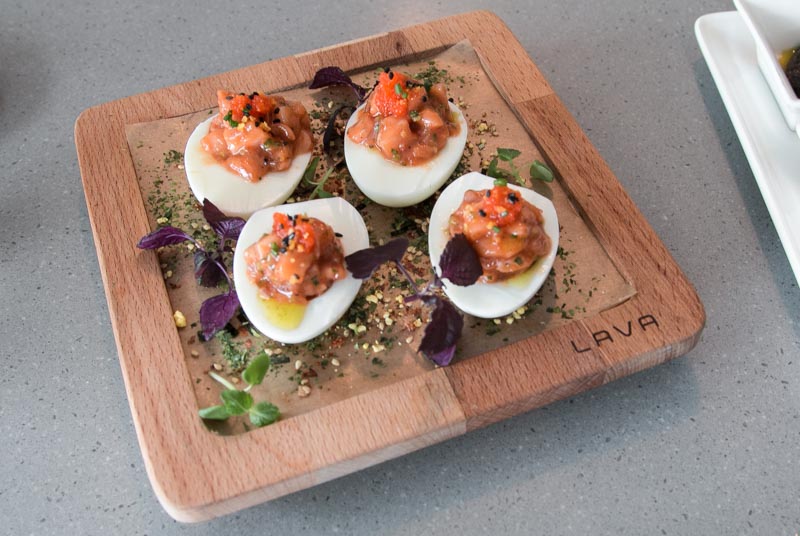 Hawaiian Poke on boiled egg whites. The poke marinate was of the usual sesame oil, soy sauce, onion etc with a hint of tomato sauce in it. The eggs are then topped with a dollop of ikura, introducing an entirely different texture from the soft flesh of the salmon and the rubbery solidity of the boiled egg white.

The ikura gave the poke a burst of oceanic saltiness. Apart from the ikura, the furikake (the dried fish flakes +seaweed + sesame seeds garnish) is another key ingredient to this poke; it adds character to an otherwise relatively singular flavoured dish.

NUVO’s furrikake is rich – with an aromatic lull of seaweed and an enjoyably prominent flavour of fish. Needless to say, the furikake completed this dish brilliantly.

Overall, a super addictive tapas I’d love to have more of. Wish one serving had more than 4 halves of an egg. 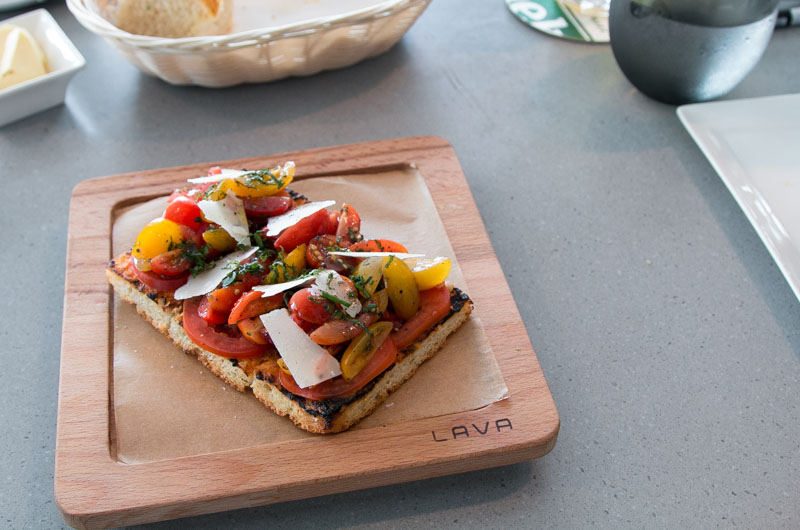 ‘Momotaro’ translates to ‘Peach Boy’ and according to Japanese folklore, Momotaro was named so after an old childless couple found a boy in a giant peach. Basically, he was a son of a peach.

Whether or not NUVO was trying to clandestinely insert curses into their menu or not, this bruschetta might just have you mumbling curses after one bite. All three types of tomatoes ( I assume that’s what trio was indicating) were so juicy, sweet and sufficiently sour, this dish was refreshing and appetising. The bread, toasted to a degree of hardness, was solid enough to hold the tomatoes and sauce together without turning mushy while still maintaining crispness on its edges.

A pinch of salt was probably sprinkled as a finishing touch that made some portions much more salty than other parts but this it’s just a small issue, nothing a lil tweak can’t solve. 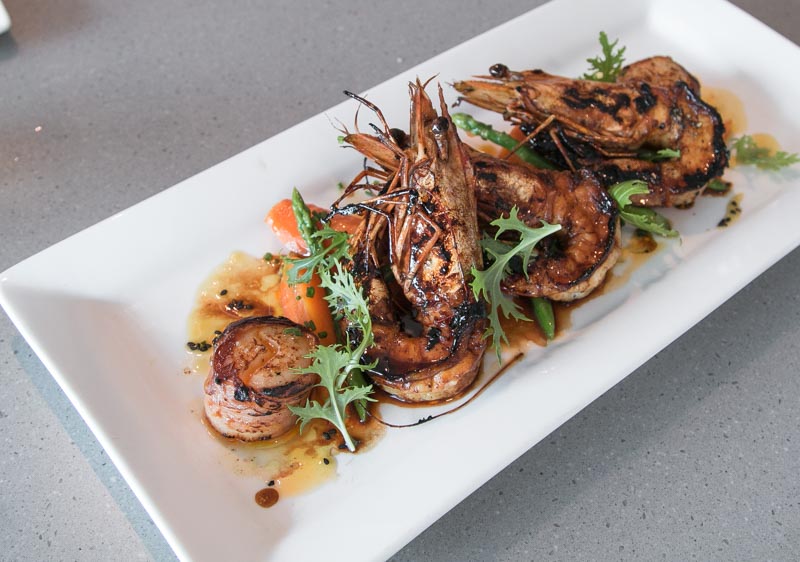 Did you know, there’s a river called the Blackened Soyu River on Mount Rebundake, on the coast of Hokkaido?  To catch these prawns from the river is arduous. These prawns are swift and good camouflagers making them extremely tricky to catch, not to mention they are only around in winter where they migrate to the warmer inland lakes.

Did you also know that I was just shitting you.

Jokes aside, this was a sweet, salty and slightly bitter (from the burnt areas) dish of superbly fresh seafood. The extra blackness gave the prawns that extra chao-tah’ flavour (burnt flavour) that we seem to adore as like on our satays, chicken wings, char siew etcetera. Underneath lies mikan glazed carrots that were overly saccharine.

The scallops were soft and chewy but the bacon wrapping around it made it too salty for my liking. Although it smelt strongly of truffle, it didn’t taste as such. The yuzu’s zestiness eased the pungence of truffle. For those who aren’t fans of truffle, NUVO’s variation might be up your alley.

The truffle fragrance is very subtle while the pasta tasted citrusy and oceanic (from the seaweed). The brown pieces of mushroom looking things are not truffle but foie gras.  Another strong tasting ingredient but it was not overly gamey/foul tasting. Fregola are little balls of bubble-tea-like-pearls pasta. Unlike pearls, fregola is denser and chewier. Disguised with the fregola, are chickpeas, giving a surprising change up in texture. Interestingly, the choice of meat in the carbonara is medley of pork belly, pancetta and goose liver.

Evidently, this is not your usual sort of carbonara but don’t worry, it still tastes like that familiar creamy pasta we love. 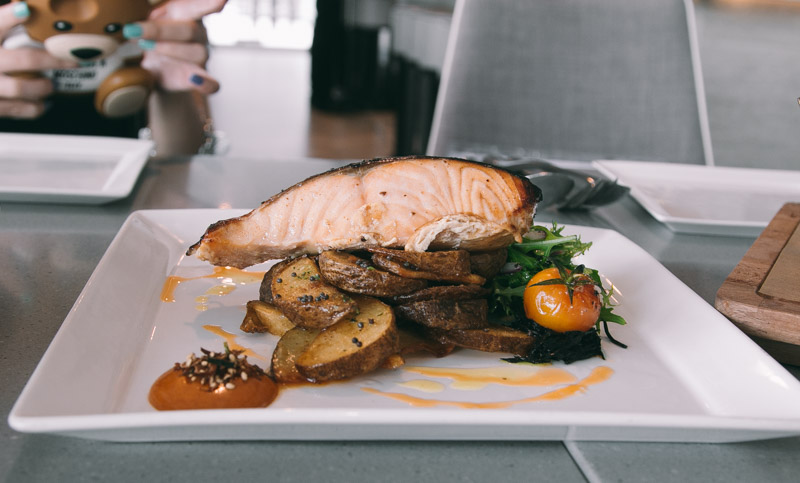 Roasted just right and flaking ever so slightly, the salmon is extremely soft; simply a joy to eat. The potatoes were crisp on the edges.  See the little dollop of sauce on the left edge of the plate? that’s probably the best aioli I’ve ever had in my life. Would 10/10 buy a bottle of it.

Medium rare and extremely flavourful, this lamb chop was a joy to devour. Although the degree of redness seems intimidating, it surprisingly, was not overly gamey probably owing to the well-paired sauce. On the skillet is polenta which has a distinct taste that might not be many people’s cup of tea. The flakes of kale on top were delicious, crunchy and provided this freshness to an otherwise strong tasting dish. 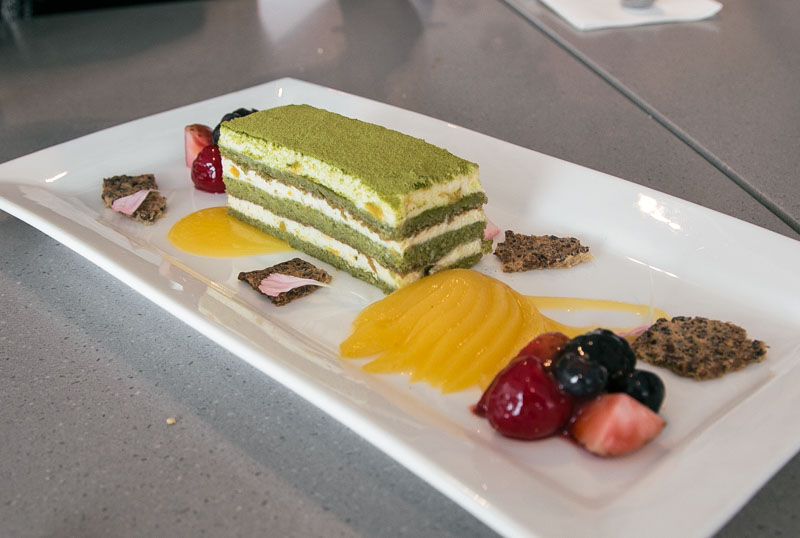 Supposedly a tiramisu but just felt like a matcha peach cake? Was nice but not impressive and certainly not reminiscent of a tiramisu at all.

Loved the little crispy bits of praline like biscuits scattered around. 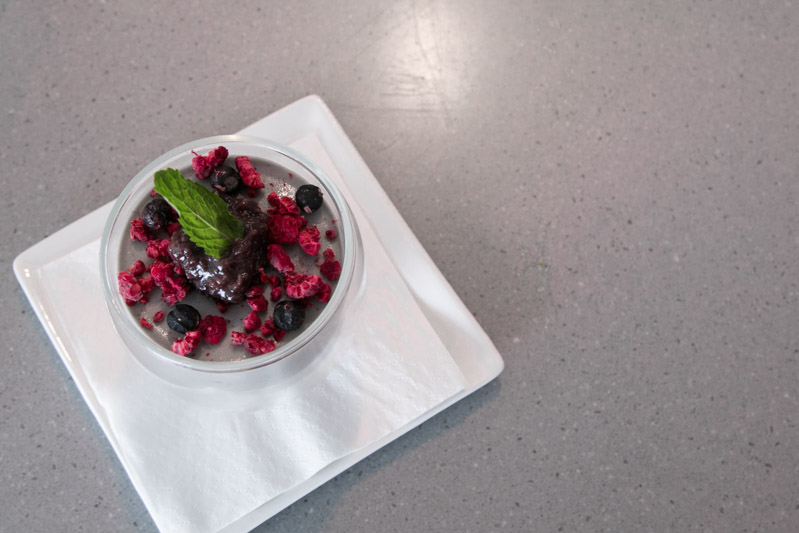 Smooth and creamy, the pudding has a denser texture than the usual panna cotta and is complete with a subtle black sesame fragrance. The dehydrated berries add a slight zest while the azuki beans provide extra sweetness. If you think that’s it, you’re wrong. As you work your way through the dessert, you’ll find more layers of azuki which is a refreshing surprise.

Concept wise, NUVO is now cultivating itself into an all encompassing restaurant that has food, drinks and entertainment. They’ve introduced a new initiative dubbed ‘Sunset Sessions’ where a DJ plays against the scenic backdrop of the setting sun and Marina Bay Sands. That sounds hella chill!

Although I expected some of these things to be better, especially in the dessert department, NUVO is still a pretty decent place. With entrees starting from $12, pastas from $21 and desserts from $10, I’d say that the price is pretty reasonable for the quality, ambiance and location

I’d be back for their tapas and to try out the other desserts.

Dining at NUVO just got better with the Entertainer App. Simply download the app, enter SETH2016 during checkout of your basket and get yourself access to a world of wonders, aka 1-for-1 deals at all participating restaurants. Of course, NUVO as well. So what are you waiting for, your stomach is calling, wallet isn’t crying.

Previous articleRestaurant SELA: Modern Asian Singapore Restaurant Review with 1-for-1 mains
Next article12 Good Eats in Bedok and Simei, You’ll Be Proud To Be An East Side Represent