In case you missed it in January 2016, Diageo RESERVE actually built a replica of legendary New York bar, Please Don’t Tell (PDT) at The Landmark Mandarin Oriental hotel in Hong Kong, a winner of the 2016 Forbes Travel Guide Star Awards.

Thanks to Diageo, the brand behind world-famous fine spirits such as Tanqueray and Don Julio, I was flown over to Hong Kong to experience a recreated PDT in The Shell at MO Bar.

If you aren’t familiar with Please Don’t Tell, this New York speakeasy bar is regularly touted as one of the best bars in the world with accolades such as World’s Best Bar 2011 and #1 all-time achiever  in the World’s Top 50 Bars (2014).

But all bartenders know this already – everyone knows the celebrities in your industry. Guests will step into the PDT HK bar through a vintage phone booth entrance above MO bar, just like the one in St Mark’s Place, New York. Once inside they will find a space that faithfully recreates every detail of the New York original speakeasy. Short of shooting an actual bear (which the contractors offered but were kindly declined), even the hung moosehead taxidermy has been duly emulated. 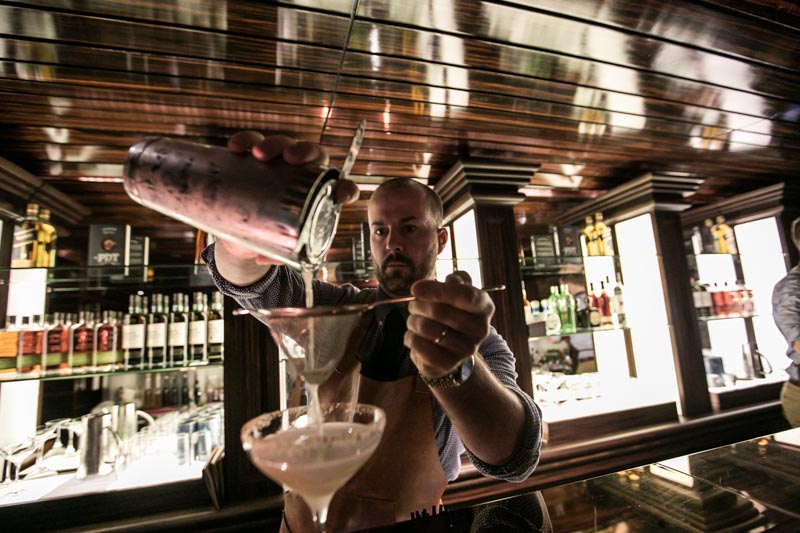 Jim Meehan, founder of PDT, and author of the PDT Cocktail book can be found behind the bar mixing drinks with stoic single-mindedness.

Jim has toiled in nearly every line of the hospitality business for the latter half of his years and is pretty much the bartending master every padawan bartender aspires to become. 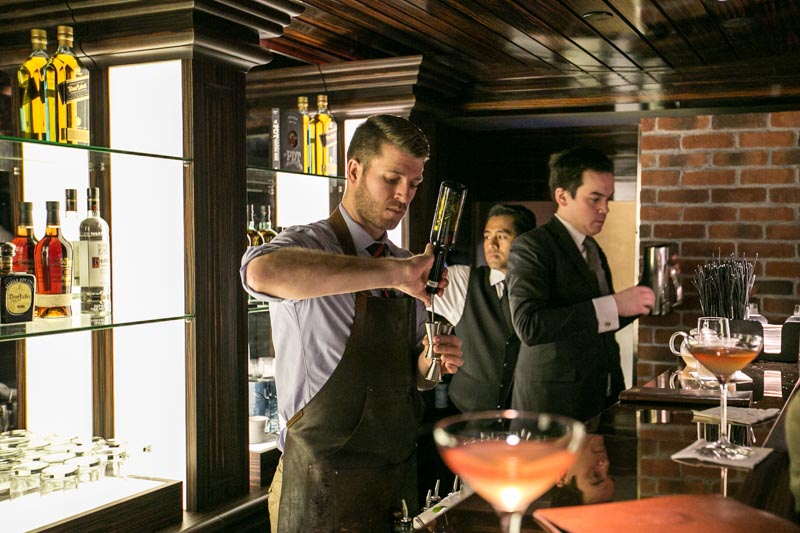 Current head bartender of PDT and rising mixologist, Jeff Bell, who is also World Class USA Bartender of the Year 2013 by the way, accompanies his mentor with crafting signature cocktails for guests in Hong Kong.

So rather than just describing the night, I thought I’d share some of the interesting insights I learnt from Jim Meehan while I was bugging him incessantly through his busy shift. These are pointers I think all aspiring bartenders can learn from.

1. Always think about your guests first 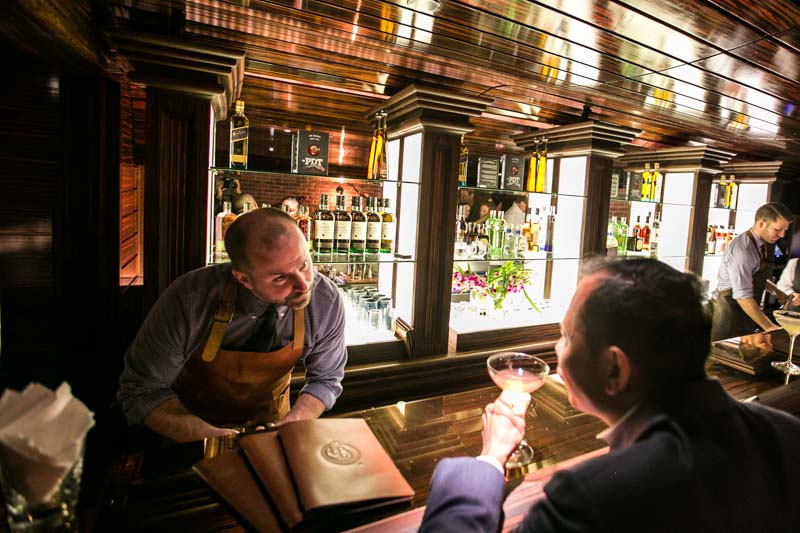 “We wanted to make people happy” says Jim Meehan after he had time to catch a breath from making drinks to answer my questions.

This was the underlying vision of Jim Meehan for PDT and it’s this goal to create a bar for guests, rather than for a bartender’s own egotistical dreams that has propelled the success of PDT New York.

Jim uses a ratio of 3 staff to every guests; although not as profitable (and probably not as feasible in labour-crunched Asian countries like Singapore), this produces the very best service experience.

Each guest has to be seated and excess people are turned away once all seats in the bar are filled – strictly no standing is allowed even if guests requests so and whine that ‘its totally fine’.

At top-notch F&B outlets, its interesting how the host thinks more about your own comfort than you do, which goes beyond expectations and hence makes them memorable.

2. Once you find your passion, you won’t get bored 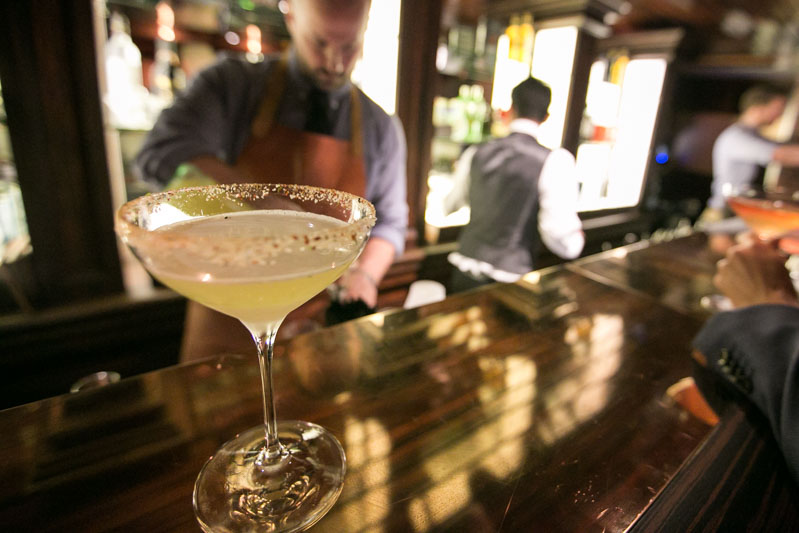 Even after years of working in the industry and finally having the means of retiring after a fulfilling career, Jim Meehan admits that the bartending bug still bites and calls him back behind the bar every so often.

The detailed prep work of plucking mint leafs, fast-paced orders being shouted over the counter, shaking endless cocktails and hearing satisfied sighs; all that the bar scene offers has created an itch you just can’t scratch while sitting at home watching TV.

Even though Jeff Bell now heads PDT, Jim still spends almost as much time on the road at trade shows and trainings as at home in Portland, Oregon. 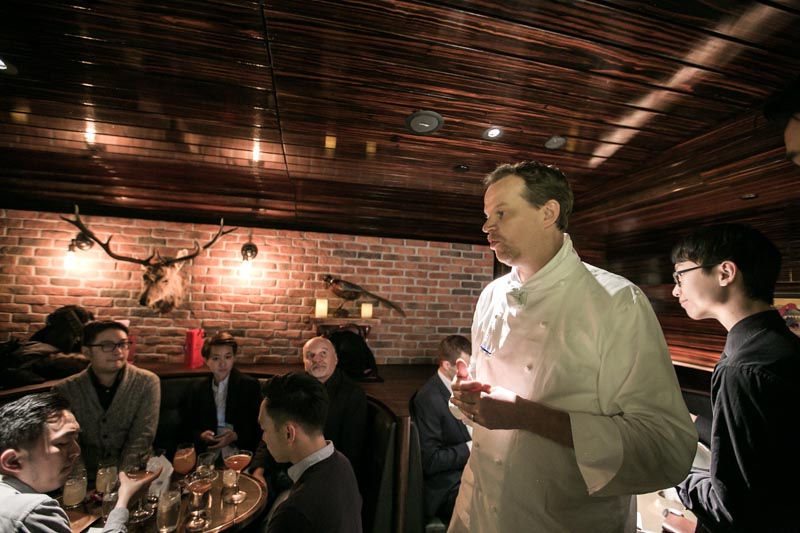 Jim Meehan has always wanted to work with world class chefs and to collaborate with them, as he believes that chefs in the culinary world are equally interconnected with bartenders in the cocktail world. For PDT Hongkong, Chefs Richard Ekkebus of Landmark Mandarin, Jowett Yu of Ho Lee Fook, Alvin Leung of Bo Innovation and Matt Abergel of Yardbird and Ronin got together to reinvent the classic hotdogs that PDT New York are so well-known for.

Rather than thinking of bartenders and chefs as separate tools, its really two sides of the same coin that need to coexist and depend on each other for the best guest experience. When the food and drinks compliment each other, that’s where magic happens.

4. Don’t neglect the music in the bar 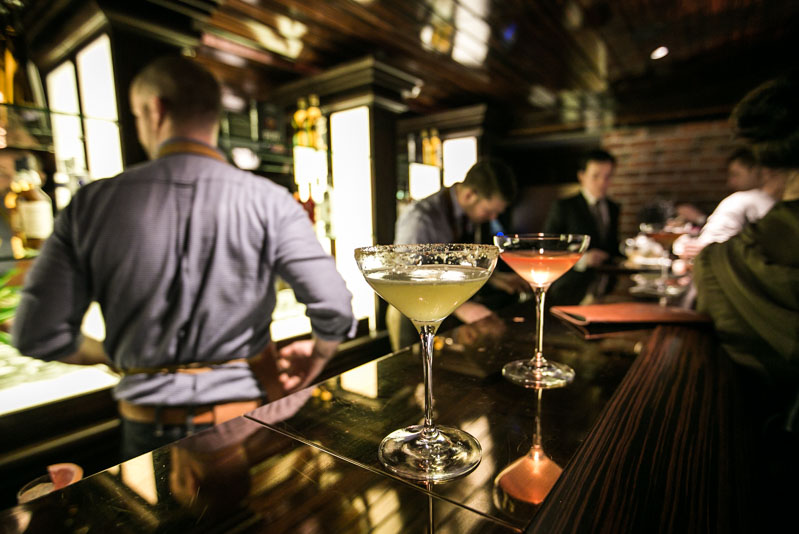 “Music was a big part of the bar” as Jim Meehan states.

From the aesthetic sight of the bar space, to the taste and smell of the cocktails, music is often one of the most neglected aspects most bars tend to overlook.

Immaculate service and drinks are to be expected, but if you want to go one step further, work on your music playlist to suit the environment and create the mood intended for. The worst is to have a playlist that is counter-intuitive to the atmosphere of the bar.

Playing K-pop in a gentleman’s bar? I don’t think so.

5. Be an innovator, not a follower One of my favorite cocktails for PDT Hongkong was the Benton’s Old Fashioned. 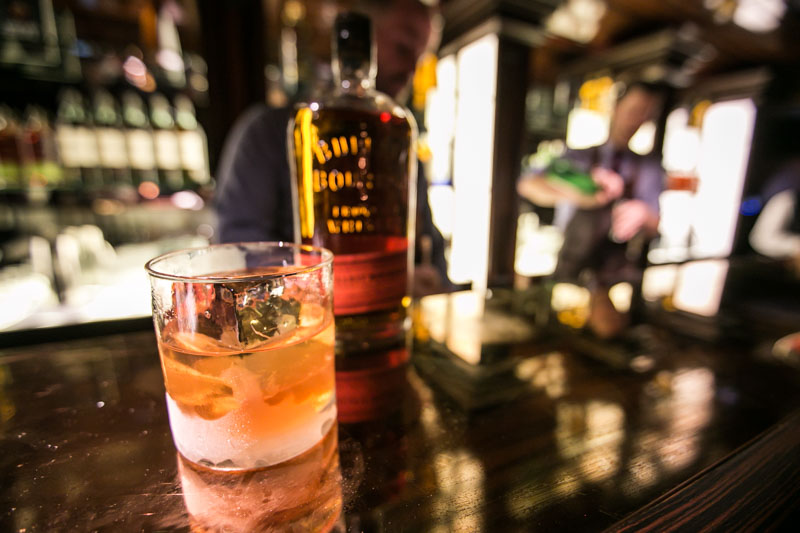 The Benton’s Old Fashioned is made with Benton’s Bacon Fat-infused Four Roses Bourbon, Deep Mountrain Grade B Maple Syrup, Angostura Bitters. A great blend of savoury smokiness with subtle sweetness of bourbon. Not your usual Old-fashioned is it.

PDT has a unique phone booth entrance (where you’ll actually have to dial and speak to someone before getting in), and is also the first bar to popularize the use of a butcher’s apron as part of the bartender getup.

When you want to create something new and to set yourself apart from the rest of the sheep herd, you have to take risks and explore innovation. 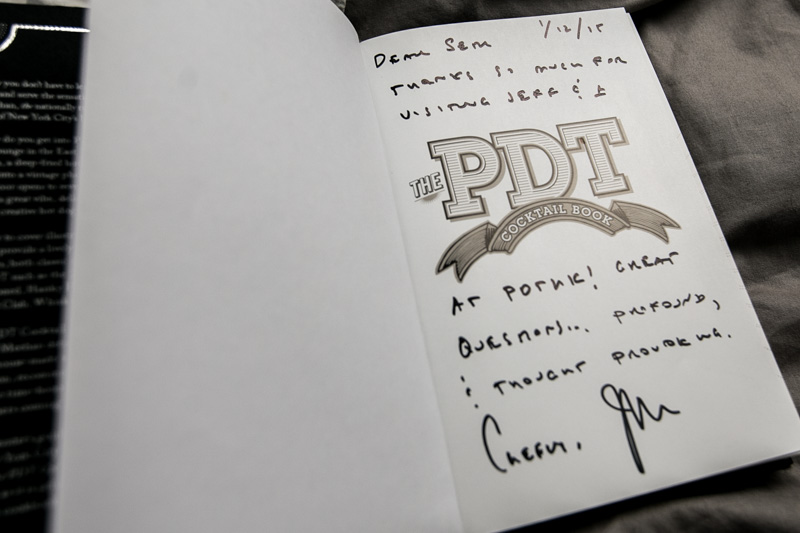 At the end of the day, I asked Jim Meehan, “What’s special about PDT?”

“Nothing, really.” says Jim after a long pause.

Every bartender can achieve what PDT has done as long as they place their guests first and foremost.

Previous article12 Good Eats in Bedok and Simei, You’ll Be Proud To Be An East Side Represent
Next articleTravel Often? 10 Reasons You’ll Love The Sony RX100 IV Camera