For someone who grew up in the East (specifically around the Bedok and Marine Parade area), Bedok Interchange Hawker Centre‘s like a second home to me. Every Sunday, my friends and I will flock there for our weekly dose of mala, top it off with springy satay, and douse it all down with sugar cane juice.

Every single time I’m there, there’ll be a snaking queue at Pin Xiang Hainanese Chicken Rice 品香雞饭. Now after trying it for myself, I finally understand why it’s so popular — it’s absolutely delicious and suuuper worth it, considering each plate is only S$3.50. 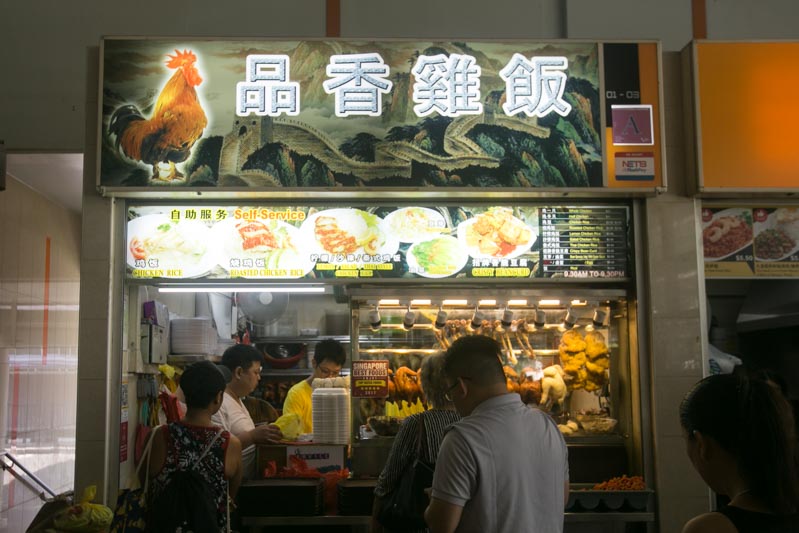 With over 30 years of experience dishing out delicious chicken rice, the folks at Pin Xiang Hainanese Chicken Rice have had time to tweak its recipe (they call it an ‘authentic secret’) and make it a ‘delicacy for all’.

The chickens are delivered fresh from the farms daily and are carefully chosen to be above 2.2kg each. That’s to ensure that each chicken maintains its tender and juicy texture throughout the cooking process. Bedok Interchange Hawker Centre is located right next to Bedok Mall, which is at Bedok MRT. After going a massive revamp a couple of years back, the large hawker centre now sports massive ceiling fans, wheelchair-friendly tables and slopes, as well as free WiFi from [email protected]

What I really love about Bedok Interchange Hawker Centre is how breezy the place is. Thanks to its high ceiling and the many ceiling and wall fans, you’ll rarely feel like it’s stuffy and hot when dining there.

However, there’s always throngs of people dining at Bedok Interchange Hawker Centre no matter the day or time, so be sure to come armed with packets of tissue paper to chope your seat! 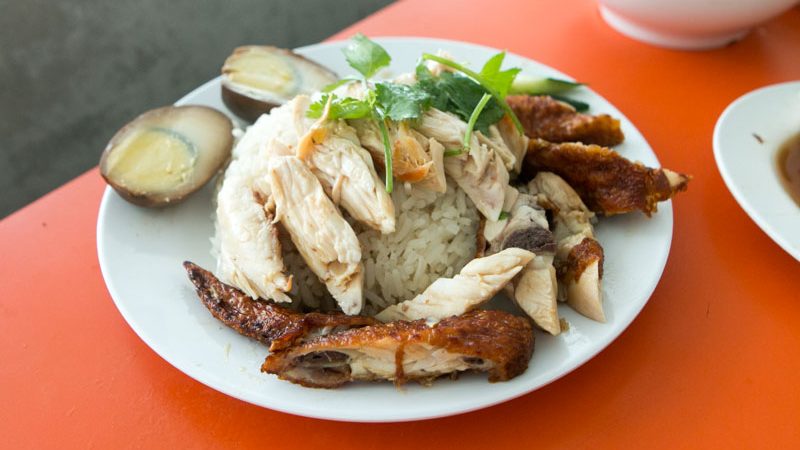 I ordered my standard go-to: Roasted Chicken Rice (S$3 for small, S$3.50 for large) with an extra Egg (S$0.50). I was incredibly surprised to see a generous amount of chicken meat with my meal.

In fact, there was so much chicken meat that a good portion of it had to be piled at the side of my mound of rice, rather than neatly on top of it. Consider me already impressed! I absolutely loved how tender the roasted chicken meat was. It was plump and juicy, and dipping it in the soy-based gravy that it came with gave it an extra salty oomph, which I relished in. I also realised that the meat wasn’t flattened before being chopped, which was a huge plus in my books. A lot of stalls do nowadays to make the meat seem larger.

While I prefer boneless meat, I actually really enjoyed chewing on the little pieces of chicken meat that came with the bone, which were mostly joints and wings.

The roasted skin was charred, smoky and crispy and to me, that was just like devouring fries that are too tiny or too crispy. Mmm! 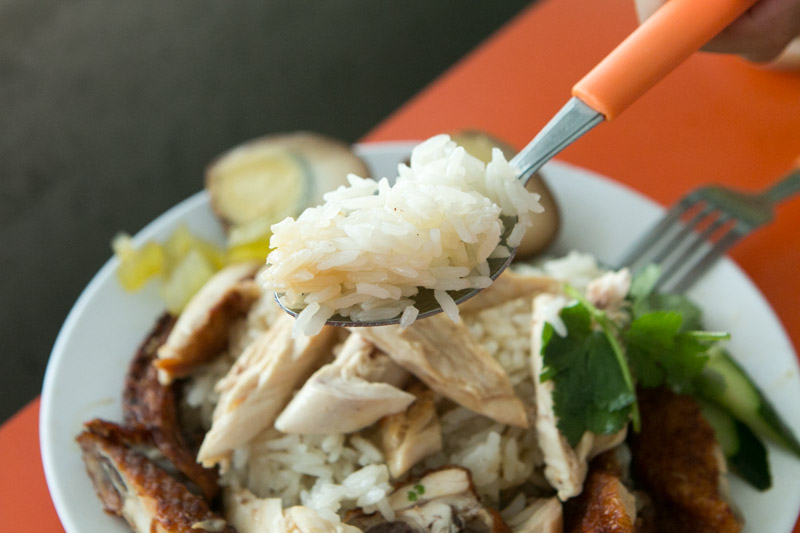 As for the rice, I could taste hints of garlic, ginger and a subtle hint of chicken stock and chicken oil. While it was fragrant and not oily at all, it was a little too dry for my liking.

I ended up pouring the soy-based sauce all over my rice instead, which gave it a saltier touch. 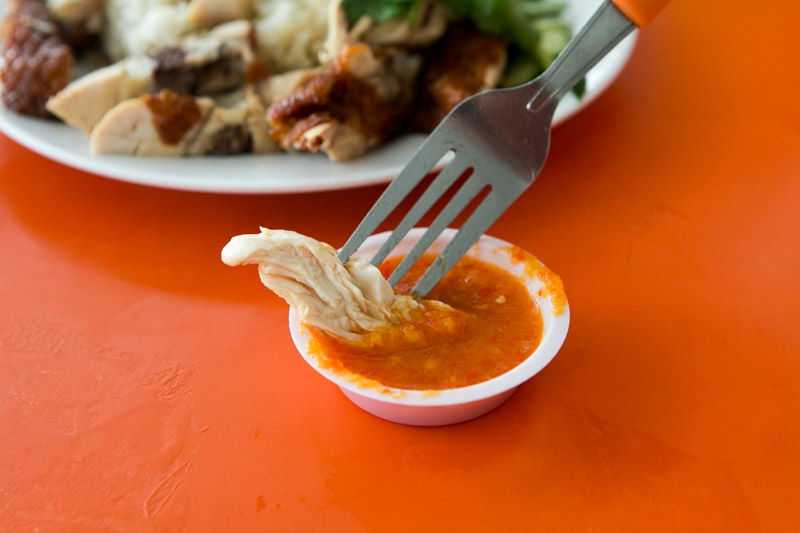 There were generous amounts of chilli padi seeds in the chilli sauce itself. I could also identify a good amount of ginger, which gave the sauce more depth and texture, resulting in an almost paste-like sauce, rather than a watered down version. 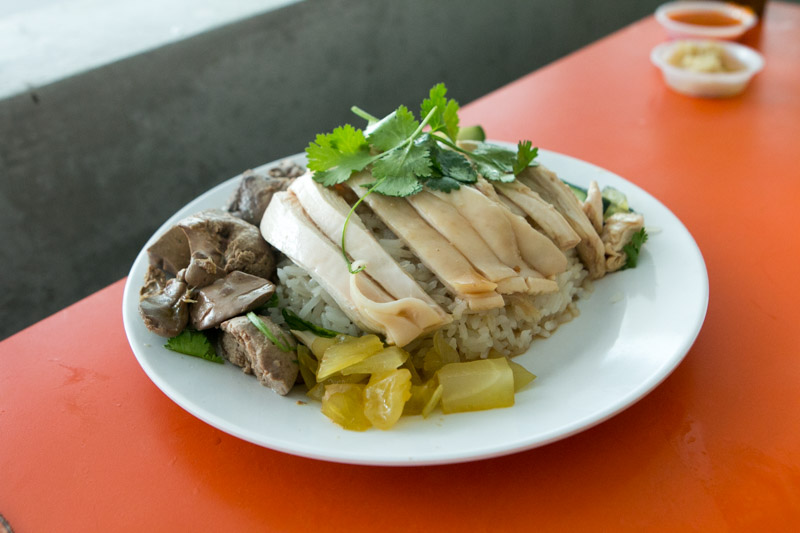 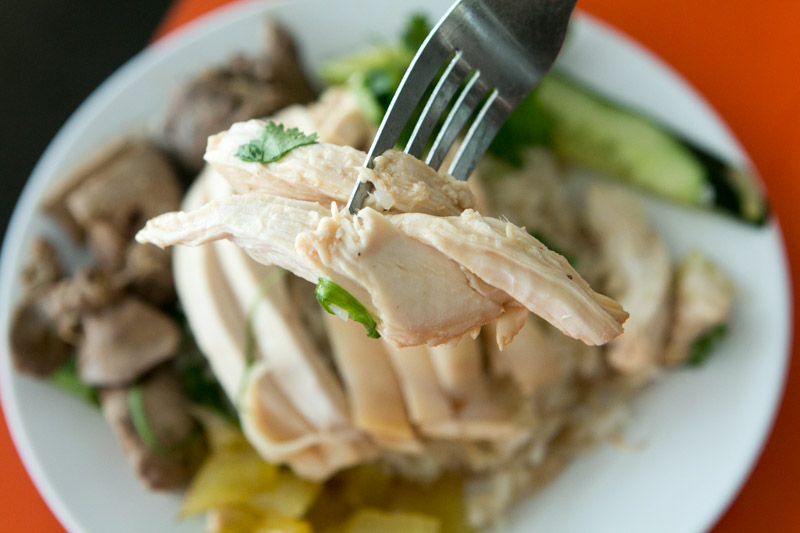 The steamed chicken meat was poached before being put in an ice bath to stop it from cooking further, resulting in chicken meat that was firm, succulent and juicy. The layer of gelatinous fat beneath the sleek chicken skin was also super soft, which I really enjoyed. 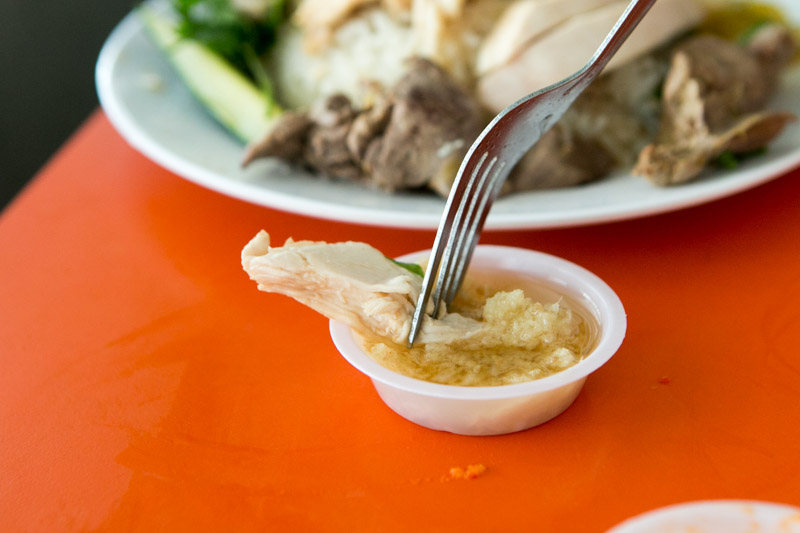 Another thing that Pin Xiang Hainanese Chicken Rice did differently from other stalls was provide ginger alongside the chilli sauce, so you could take as much ginger sauce as you’d like.

For me, I doused the steamed chicken meat in the ginger sauce, which was piquant and zesty. I even piled some of it onto my rice for an additional spicy and pungent kick! It was really light and soothing, with a strong cabbage taste, and had other ingredients such as carrot and pork bone as well. Be sure to order Pin Xiang Hainanese Chicken Rice’s Crispy Bean Curd (S$3.50), which came in six pieces, and was topped off with sweet Thai chilli and shreds of cucumber and carrot. 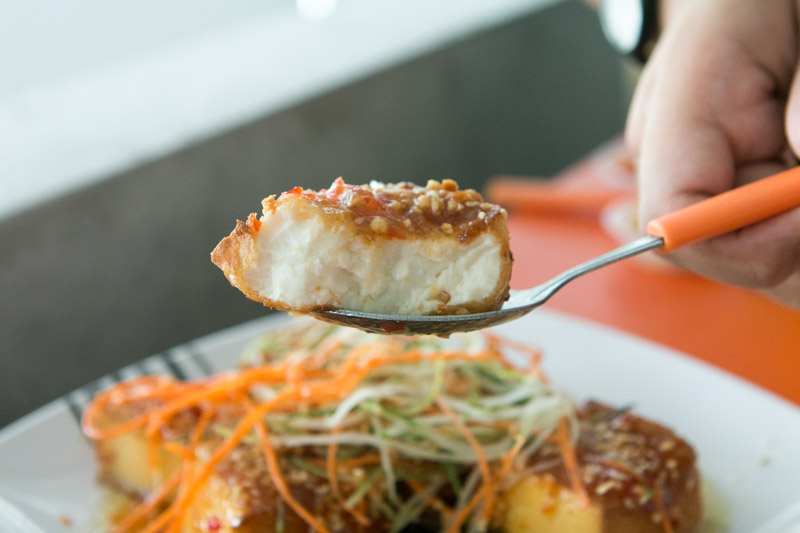 I know that Pin Xiang Hainanese Chicken Rice specialises in chicken rice, but this was one of my absolute favourite dishes out of the entire meal.

The bean curd was delightfully crispy on the outside, yet delicate and soft on the inside. Sticky, sweet and tangy, the Thai chilli sauce had a roasted and nutty taste thanks to the added garlic.

If you told me that I could get a plate of chicken rice from Pin Xiang Hainanese Chicken Rice for just S$3.50, I honestly wouldn’t believe you. Its portions are insanely generous, the chicken meat is supple, juicy and tender and the chilli sauce was sweat-inducing and fiery.

While the rice could’ve used a little bit more moisture, I’m not complaining. After adding ginger, chilli sauce and the soy-based sauce that the chicken meat came in, each spoonful of chicken rice soaked up all that umami flavours and it became savoury, piquant and really delicious.

I’m definitely coming back here the next time I’m craving a yummy plate of chicken rice, no matter how long the queue is.