From Minor Food Singapore (MFS), comes Poulet + Brasserie, another relative F&B establishment to already-popular, Poulet. Also known as P+ for short, it is a part of a larger project with MFS to showcase local chefs and their creative menus.

Chef Joshua Khoo, who is responsible for the menu behind P+, explained how the menu inspiration came about—from the cafe-hopping scene in Melbourne, to how Thai restaurants interpret French cuisine, to Singapore’s own iconic local dishes. Stepping into the restaurant at ION Orchard, the interior exuded both a chic and playful vibe, with a mix of yellow-tinted chairs as well as elegant, simple grey chairs, and light fixtures with rose gold accents. 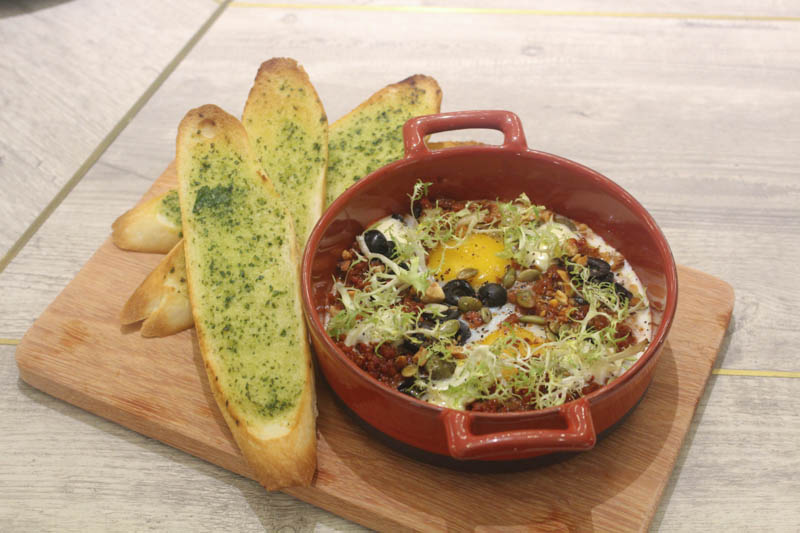 We started off with one of the all-day breakfast dishes, the Spicy Baked Eggs With Tomatoes (S$15++). It had slices of toasted garlic baguette, with a bowl of deep red stewed tomato goodness—spiced tomato concasse with spicy chorizo, sunflower seeds, olives, a half-boiled egg, as well as vegetable garnish sprinkled across. I took a piece of baguette and delightfully scooped up a good amount of the ingredients with it, especially the egg yolk, to soak up the egg’s flavour.

This dish as a whole works well in terms of flavour. The rich meatiness from the tomato concasse contrasted well against the sourness from the olives and the tomato sauce, and it was a party for my tastebuds. One of their signature dishes was the P+ Rotisserie Chicken (S$20++)—slow-roasted chicken on top of a pool of bacon bites, corn kernel and mushrooms as well as natural jus, which refers to the sauce naturally given off by the meat as it is cooked.

The quantity of the chicken was substantial, with two big pieces being the breast and the thighs of the chicken. This was definitely a dish where you will feel stuffed after. 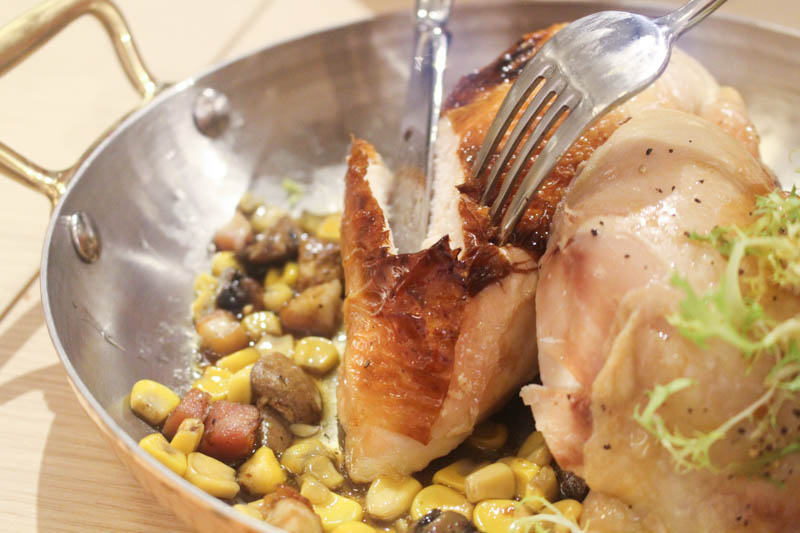 The surface of the chicken was roasted brown to perfection, and looked enticing. To be blunt, after having a bite of the chicken, it was rather ordinary. 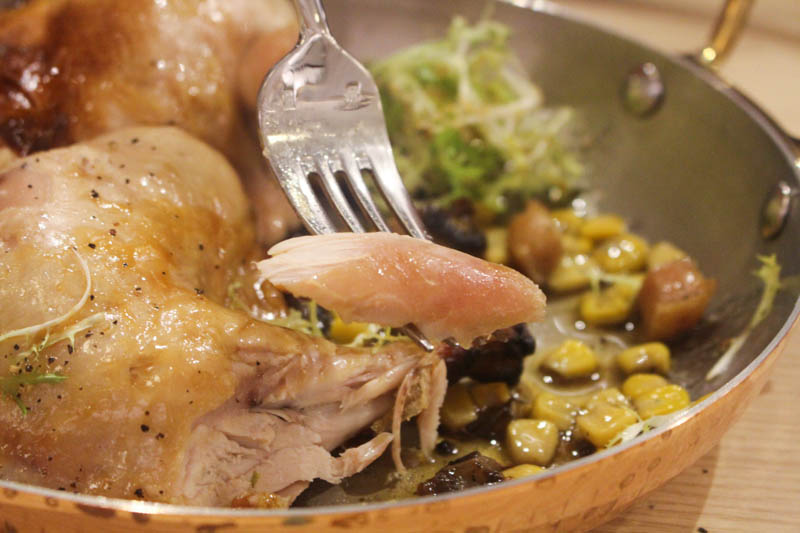 The meat was tender and slightly lean, but according to my counterparts they mentioned it had no wow factor compared to the original Poulet chicken you’ll find in their other outlets. 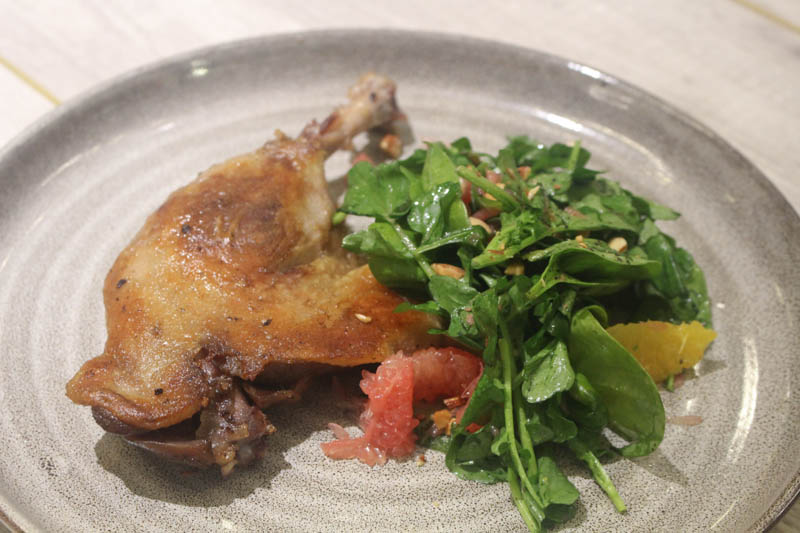 The next dish I tasted was my personal favourite out of all the dishes—the Signature Duck Confit (S$22++). Chef Joshua mentioned that the duck has been slow-cooked for 12 hours, and it certainly did not disappoint. 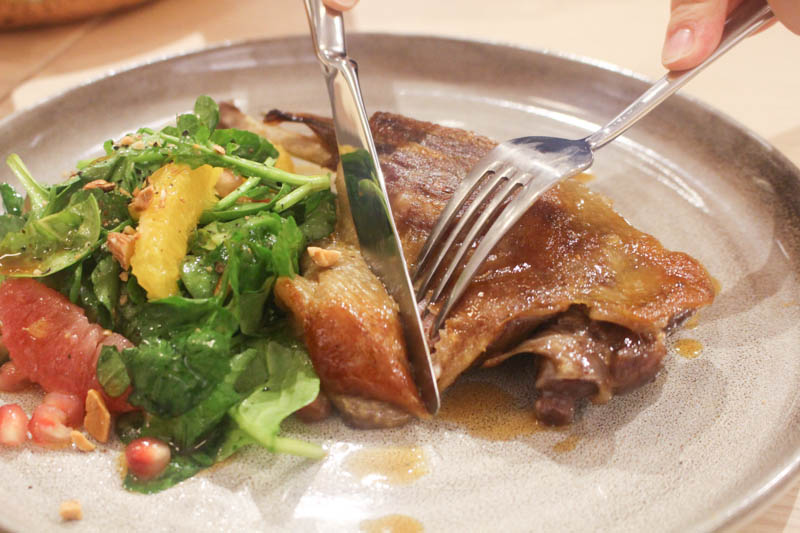 Chef Joshua mentioned that instead of the usual French style where it is served with mashed potatoes on the side, he chose a salad instead so that it will be refreshing and lighter on the palate.

Boy, it sure was a good choice. The duck confit was fall-apart tender as I sliced into it, revealing a mellow and pinkish inside.

The meat was well-seasoned without being overly gamey, and complemented well with its skin, which was a tad bit salty.

The mixed salad with pomegranate and roast nuts made the dish a well-balanced one, with its sweet and sour flavour, as well as the slight crunch from the roasted nuts. Up next, I dived into the Jumbo Prawn & Garlic Pasta (S$24++). The prawns were definitely jumbo-sized, with pepper bits covering across the entire prawn, as well as spicy chorizo, and a reasonable amount of lumpfish caviar. 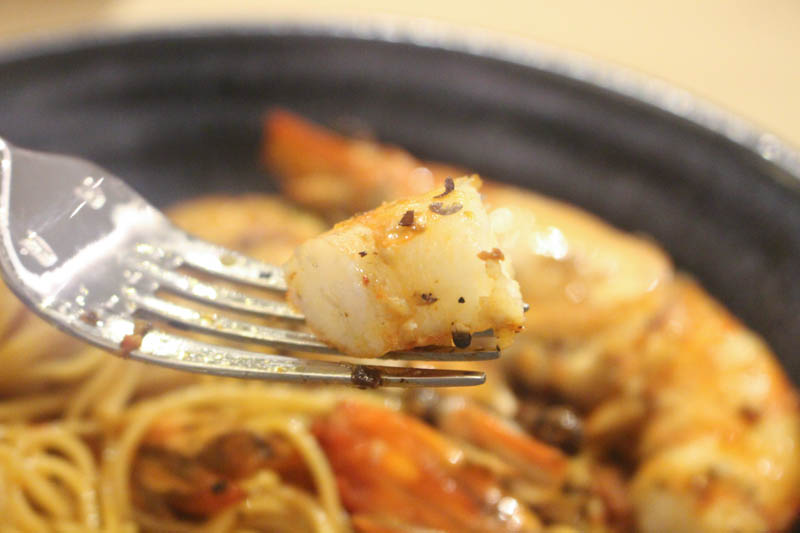 The jumbo prawns were meaty and flavorful, with the desired bouncy texture one would expect. I enjoyed the robust flavour combination of the spicy chorizo along with the lumpfish caviar, that brought fireworks to my senses with every bite I took. 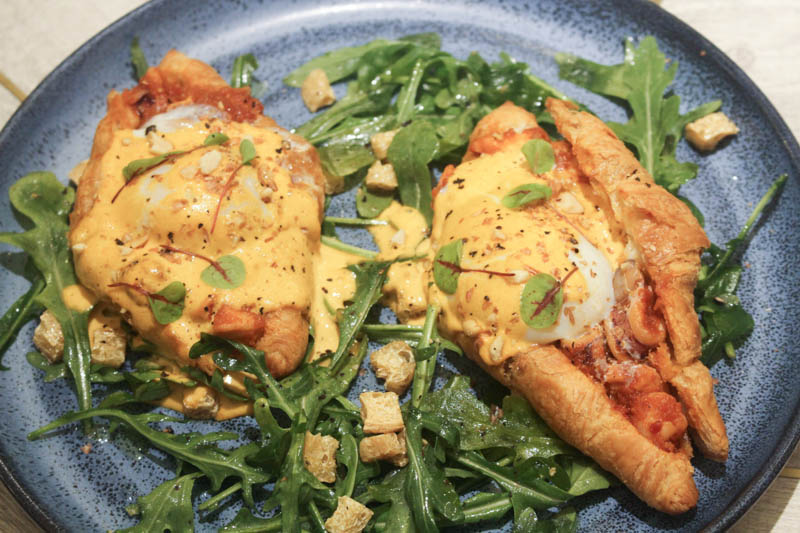 Next, I had a taste of the Market Seafood Eggs Benedict (S$19++). It was distinctly familiar, with its looks similar to a classic eggs benedict.

The dish had toasted croissant bits, with 64-degree poached eggs at the top, a dollop of laksa hollandaise sauce, and upon a closer look, small pieces of fried beancurd. 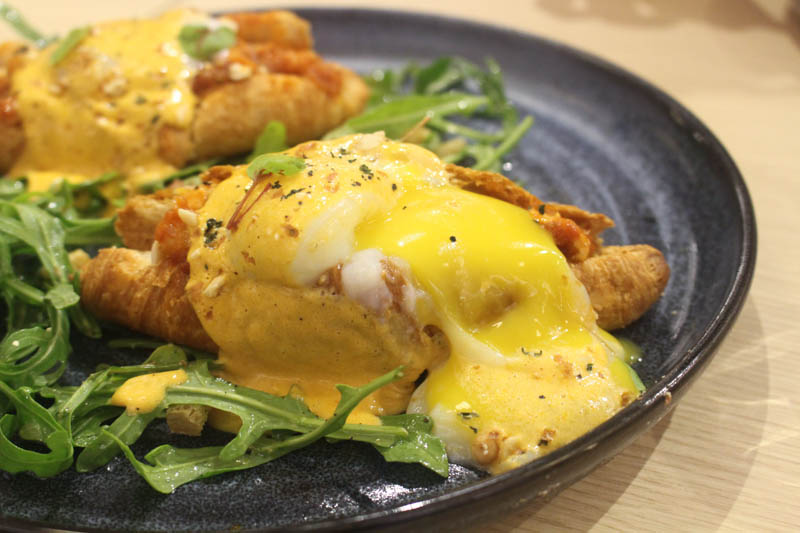 As a whole, I gave it the benefit of the doubt because it was a ‘fusion dish’. Although it was as good as a classic eggs benedict dish, the laksa portion of the dish did not register as significantly as it was overpowered by the savouriness of the egg yolk.

The fried beancurd was citrusy, adding a slightly invigorating contrast to the dish.

For it to be truly unique, I would definitely have preferred the laksa flavours to stand out more, as it gave me a lasting impression of a merely ordinary eggs benedict dish.

Do give this place a visit when you are in ION Orchard, with its creative French fusion dishes, ideally located in the heart of Orchard Road.