After their first chapter “Monochrome”, Preludio is taking “Author’s Cuisine” to another level with an all-new chapter: “Time”. “Author’s Cuisine” is a concept designed by Chef Fernando, which provides complete freedom to blend various flavours, colours, textures and styles on a constantly evolving and memorable dining experience. Gone are the days with strict rules and preconceptions that fine dining restaurants have to adhere to—Preludio holds the power of freedom to change things up on the menu that is only limited by their imagination.

Located on the third level of Frasers Tower, Preludio reminded me of a classic grandfather’s clock—sleek, definitive and timeless. 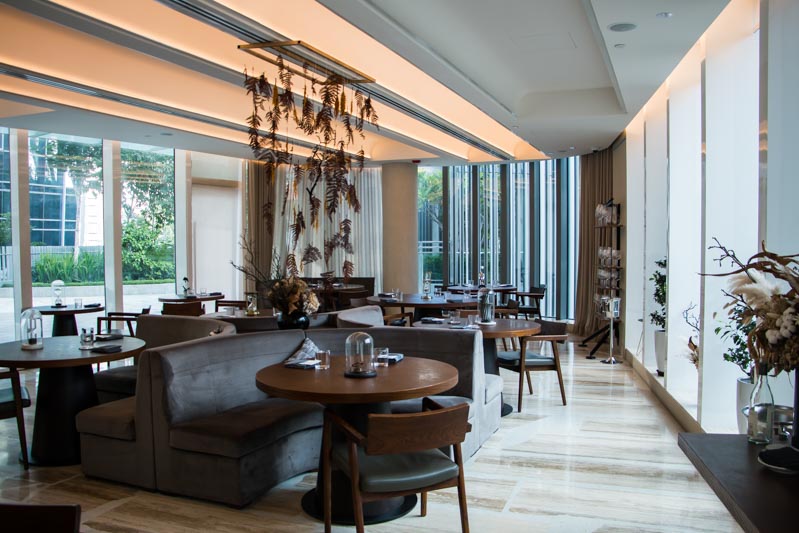 Preludio has changed its layout after its first chapter. Each table is littered with various ornaments to represent time—a subjective concept if you ask me. To me, time is centred around the circle of life—just like how the end of one journey is the beginning of the next. It signifies growth, yet is still open to interpretation from the public, which makes the whole concept extremely unique and refreshing.

Prepared by Chef Fernando and his team, Preludio brings to you their version of “Time” in an intricate eight-course dinner; the fine dining experience of a lifetime. 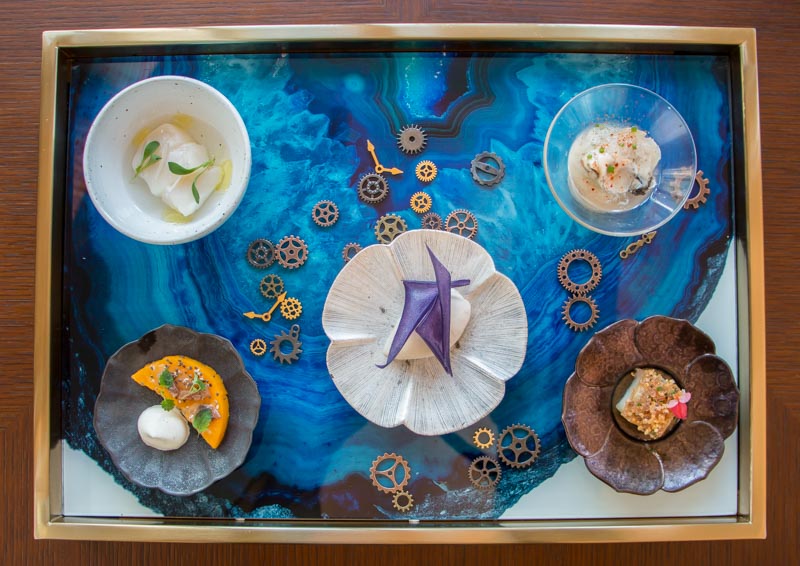 I began my dining experience with the Time Machine, expounding on the versatility of time in a medley of five petite servings—each bearing a different representation of time, according to Chef Fernando. 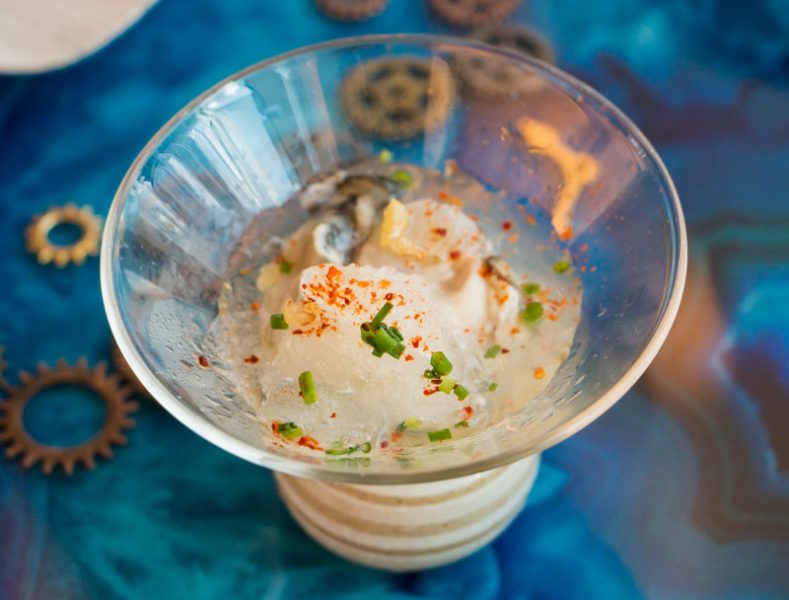 The 2 minutes featured a Spiked Brittany Oyster from France topped with popping candy and was served in a clear miniature cup. Shucked in exactly two minutes, the springy oyster bore hints of brininess and was enveloped with a subtle tomato flavour from the citric granita.

The tingly sensation of the popping candy was a playful yet distinct addition to the elegant dish, and provided a contrasting mouthfeel as compared to the oyster. 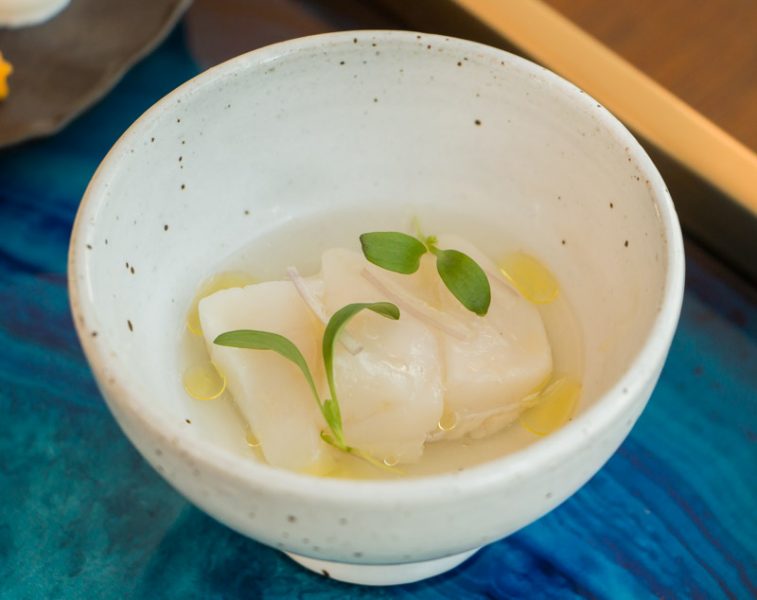 What came next at Preludio was one of the best scallop dishes I’ve had in a long time. The 1 hour consisted of a tender, whole Nantucket scallop doused in Tiger’s Milk and corn water, garnished with coriander, smoked olive oil and sliced shallots.

The Nantucket scallop was well-marinated for an hour in said Tiger’s Milk which includes raw fish trimmings with onions, coriander, chilli, lemon and lime. 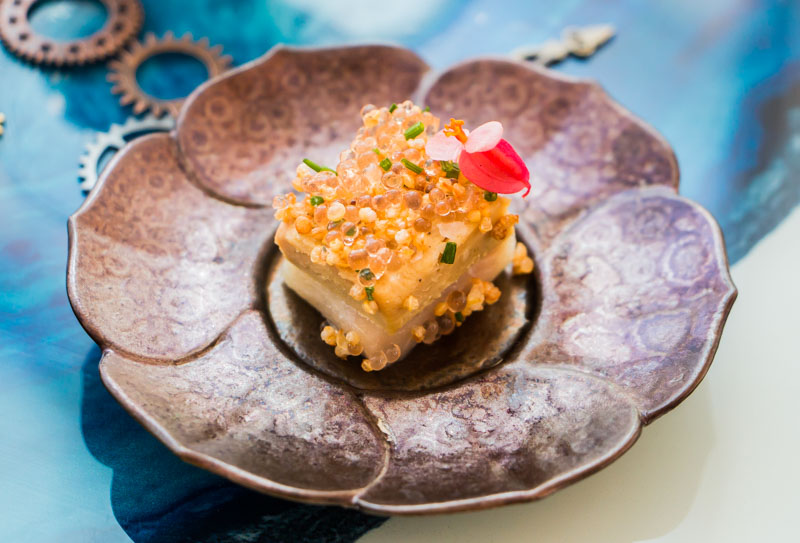 I’ve never tried amberjack before, so this was an enlightening experience for me. Taking centre stage on a decorative floral dish, the 1 week resembled the stigma of a flower in full bloom, with the sprinkled rich and buttery duck liver foie gras resembling little pollen specks.

Wrapped in cheesecloth and hung for a week, the amberjack was seasoned with salt and II Blueberry Vinegar. This made for a savoury delicacy with a nice crunch I enjoyed thoroughly. 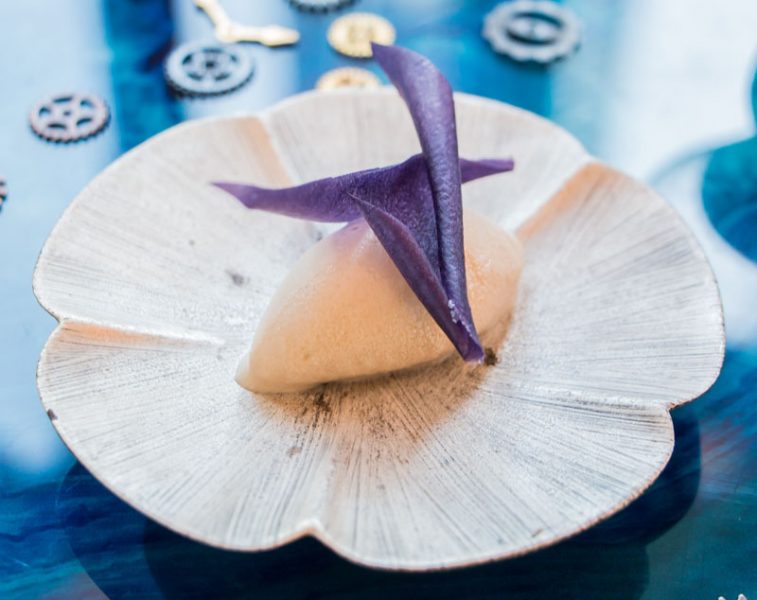 I typically save ice cream for dessert but the 1 month was astounding as a starter. A creamy dollop of fermented garlic ice cream sat atop basil pesto and toasted almonds, and the dish was topped with thin, crisp pieces of purple potato.

There was a hint of savouriness in the mostly sweet ice cream, and my tongue was met with a second wave of flavour as I detected the pesto. 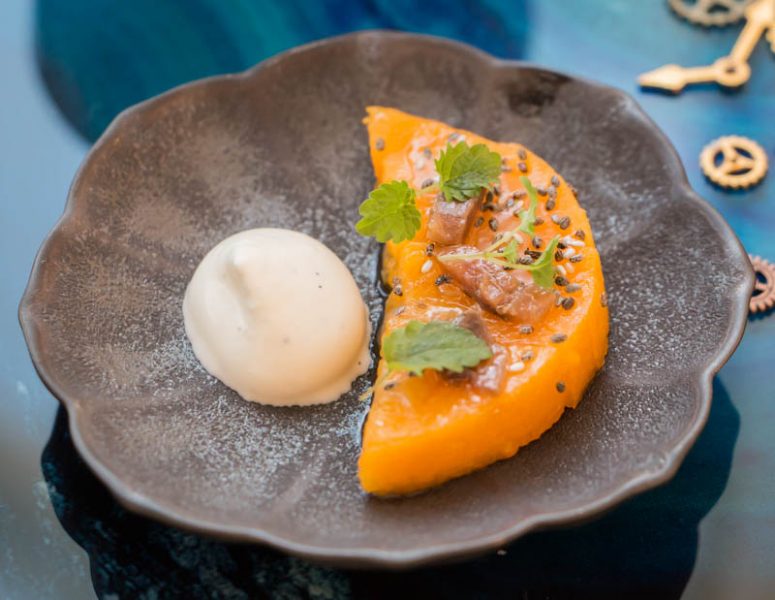 In a beautiful shade of the sky approaching dawn, the single slice of marinated butternut squash added a pop of colour to the 6 months. This is paired with a gobbet of salted vanilla cream.

The squash was garnished with anchovies that were cured for six months, together with chia seeds and zesty lemon balm, blending both textures of cream and squash together in blissful harmony to conclude the Time Machine. In a cheeky attempt, the dish Out Of Time was served as two bare stalks of crunchy, in-season white asparagus garnished with chervil roots.

It may seem that the chef ran out of time to finalise the dish. In truth, it is anything but incomplete. With the two sticks of asparagus carefully confit in butter and sherry vinegar, I personally would have been satisfied with just that. 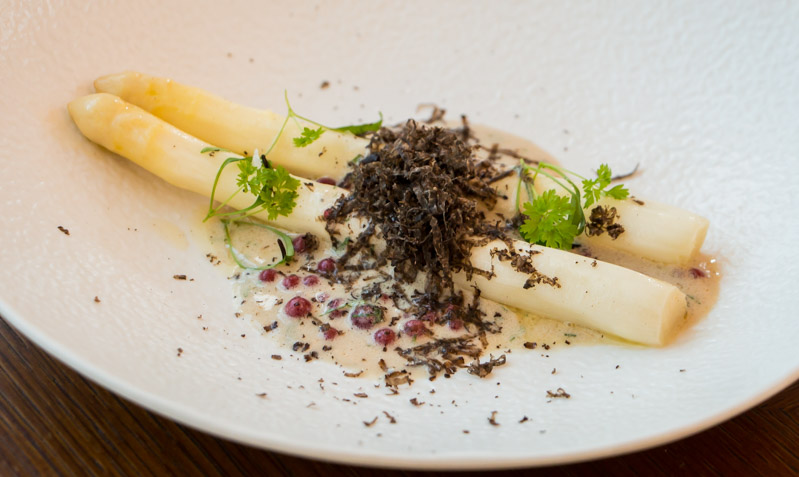 However, when Preludio’s staff completed the remaining steps of the dish tableside, I changed my mind. Bathed in cod liver sauce, white wine, and chicken stock blended with reduced cream, the chopped parsley, sour cherry pearls, and Spanish black truffle shavings were the “cherries” on top of the entire dish. Utilising the toppings and broth immediately evolved the course, letting it reach its full potential of umami in the Out Of Time.

Full of flavour yet not overpowering, the quality black truffle was from Spain, the biggest producer and exporter of the best black truffle, and it bore zero resemblance to any type of truffle I’ve tried before. I also noted a slight aftertaste of brininess and milkiness from the cod liver sauce, which provided the bursts of umami.

The latest rendition of the Pata Negra (one of Chef Fernando’s more popular dishes), the Dish Of A Lifetime pays homage to his life’s journey. A slab of Iberico pork presa wrapped in a thin film-like Obsiblue prawn sheet sits atop a mixture of white carrot puree, tomato relish sauce and basil oil, and was sprinkled with puffed rice crisps and the same special spice rub used for the presa.

Tender yet chewy, the Iberico pork was the star of the show due to its sensational smoky flavour. The tomato relish sauce also bore a hint of smokiness along with its sweetness, reminding me of the numerous childhood slumber parties I’ve had where pizza was always the go-to dinner choice. 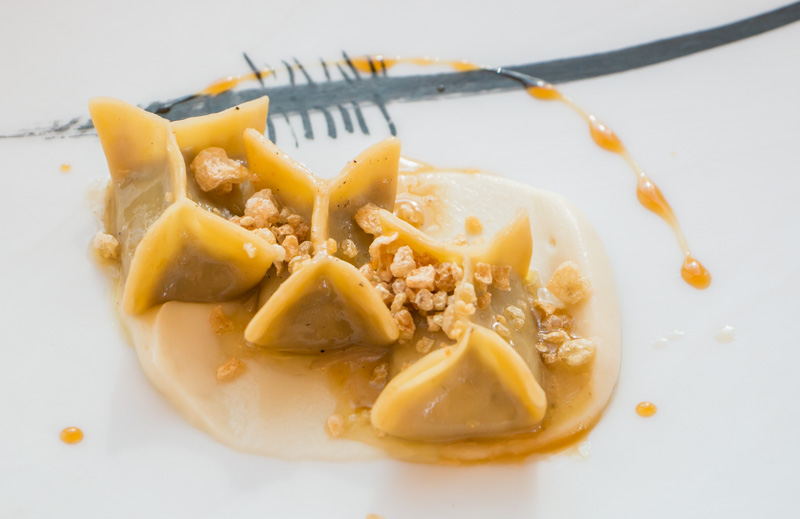 The Old Quack is a confit duck-based pasta drizzled with agrodolce sauce, made with French duck that had been aged for three weeks. Interesting fact: only female ducks are used because they have been proven to be tastier than males.

Served alongside pork crackling, Jerusalem artichoke puree, duck jus and butter sauce, the Old Quack was juicy and packed with flavour. They say good things come in threes—this dish is the embodiment of omne trium perfectum. 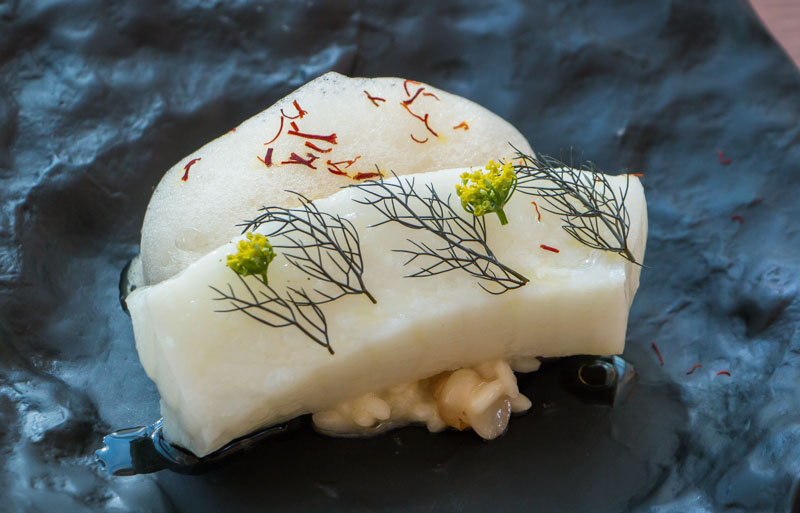 The next dish is called A 7-Year Story, named for the fact that it took seven years to age the Acquerello rice in it. I’m typically not inclined to have foam in my food, so this was a fresh experience for me—it was as if I was transported right into the ocean. Poached in shrimp stock, the Patagonian toothfish was tender and had hints of brininess in it, though it was minimal.

Unlike your everyday white rice, the Acquerello rice was significantly firmer and less sticky than usual. To top it all off, the fish was topped with fresh saffron, sweet fennel and fennel flowers that look like they have been freshly plucked from a meadow. I kid you not when I say that the Old Chimi is the best steak I ever had in my life. A blast from the past, this main dish symbolises Chef Fernando’s memories back in the day in Columbia where he used to enjoy his beef done this way. Served alongside a special Columbian sauce containing smoked cauliflower puree, smoked piquillo peppers and deconstructed chimi, the succulent, melt-in-mouth roasted Australian wagyu short rib was seasoned lightly with salt.

The flavours of these two components put together are indescribable—a divine combination, this was a truly gastronomical experience that left me wanting more with every bite. 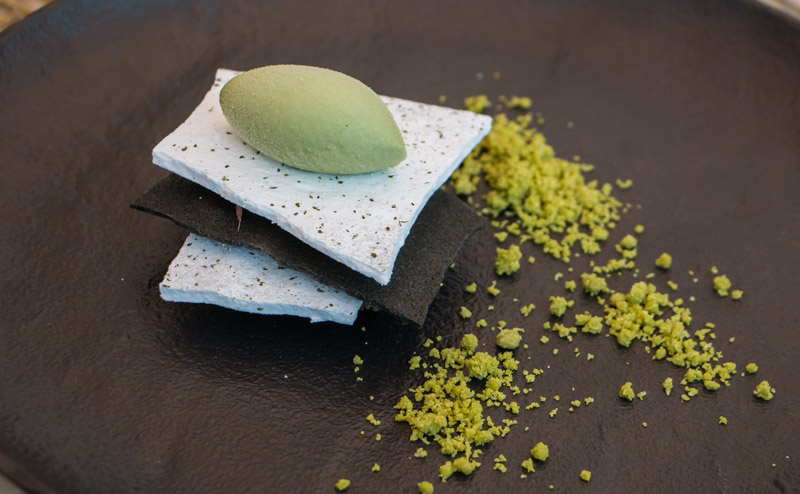 After a peach palate cleanser, I dove into Pastry Chef Elena’s Chotto Matte (which is Japanese for “wait”), an intricate dessert bringing together Japanese and European flavours.

While the dish name is slightly unconventional, it was actually inspired by the first Japanese word Chef Elena learnt when she first came to Singapore. With seaweed meringue, yuzu ganache and matcha milk ice cream included in the dessert, it was all I have been waiting for. 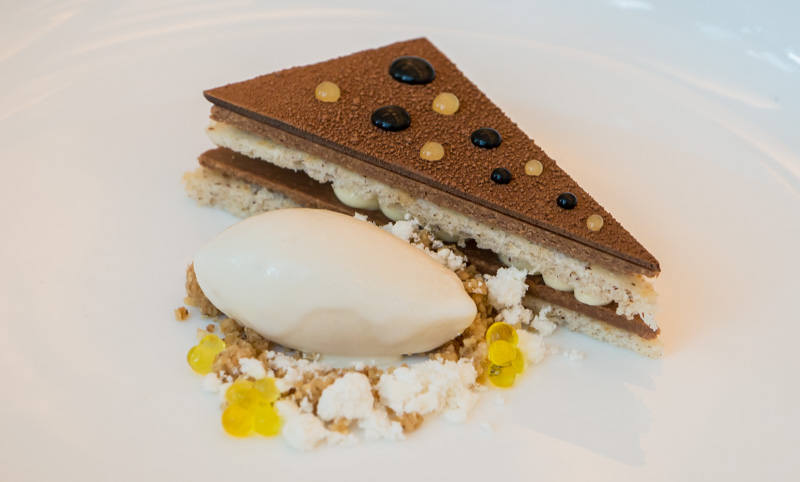 To end off the night at Preludio, I had the Amona, which translates to “grandmother” in Basque. Paying homage to her grandmother, Chef Elena created this nostalgic dish which was modelled after the after-school treat she used to get from her grandmother. This comes in the form of a hazelnut-base layered “sandwich”, which is dotted with olive oil gel and chocolate glaze, and served alongside olive oil caviar and a house-made fougasse ice cream.

The olive oil caviar added a hint of umami to the dessert, but it was subtle and not overpowering. It was something refreshing that I’ve never tried before, so I found it to be extremely rich and different. I could see why this was a nostalgic dish for Chef Elena—my grandma used to make me special bakes and treats when I was younger as well.

Considering that this was my first fine dining experience, it was phenomenal.

Preludio has definitely exceeded all my expectations of a fine dining journey—everything was prepared with great care and attention to detail. I would recommend Preludio if you’re up for a contemporary fine dining experience.

Whether you’re celebrating an anniversary or a big date night, I urge you to consider dining at Preludio—it’s definitely an encounter not to be missed.