Produce Explained: Beef Up Your Knowledge With These 7 Beef Cuts

Who doesn’t love the taste of some tender steak right off the grill? Most of us go to the butcher or the supermarket to scout for our steak options. In this edition of Produce Explained, we’ll be delving into the beefy world of beef cuts, just so you have a better idea of what cut of steak lands on your dinner plate.

Different cuts have different qualities but I’m sure the following cuts of beef will leave you carnivorous bicuspids clamouring for more. While the weather may dictate your dinner plans, it is always a good idea to know what you’re cooking and how to cook it—after all, you are the master of your own beefy destiny.

Top sirloin comes from the section of the beef just behind the loin and the hipbone. It is subdivided into top sirloin and bottom sirloin. Though considered as a relatively lean cut of meat, this beef cut is impeccable for grilling. It is the most common cut of beef we can find in Singapore and it’s often a steak lover’s first choice. Prized for its fine but firm texture and its robust flavour profile, it carries a similar flavour profile and texture to the more expensive cuts.

Possessing a bold and beefy flavour, this popular steak is delicious on its own. While the top sirloin does not offer much marbling as compared to a rib-eye, it certainly has enough to provide a good flavour for a steak.

The preferred thickness for this cut is 1-inch to 2-inch range, with 2 inches being ideal. The reason being thicker steaks are less prone to drying out as easily when cooked. Be mindful of butchers who describe the sirloin cuts to be equivalent to a filet mignon because that comes from the other end of the tenderloin. Does this steak fit into your weekly dinner rotation? No? Here’s why it should. Battling a reputation of a tough and inferior cut, this humble steak makes a simple and affordable pièce de résistance to be savoured any night of the week. Essentially a “weeknight steak”, this versatile and tender steak is elegant enough for company. It carries an intense depth of flavour and cooks up really easily.

Best cooked over high, dry heat, its desired doneness is medium or slightly over. There is a myriad of ways to cook this steak cut—the best way being on the grill; though a pan-seared top sirloin steak is also exceptional. Season lightly with salt and pepper or your favourite rub before grilling. If you like a little more flavour, douse in some marinades and sauces. They only need a few minutes per side, adequate rest and there you have it; a perfectly juicy, grilled steak.

The new york strip is harvested from the “short loin” section of beef without the bones. Essentially known as the top loin, it is a succulent and elegant roast. It encapsulates a good amount of marbling though it’s not quite as tender when compared to a rib-eye or a tenderloin.

A 1-inch thickness tends to be the standardised size for grocery store butchers. As a rule of thumb, the thicker the steak the longer you need to cook it. They take relatively little preparation and can be cooked to a melt-in-your-mouth texture effortlessly.

With this as your entrée, uncork a bottle of wine. Whether it be pan-seared or grilled, all this steak needs is just a coating of crushed black pepper, salt and some butter. A few minutes of cooking time and even fewer ingredients, this is the perfect steak for any steak lover.

Essentially known as the cow’s shoulder, the beef chuck is part of the sub primal part of a cow. It is typically a rectangular cut, about 1-inch thick, and contains parts of the shoulder bones.

Having a good deal of collagenous tissue, chuck makes a good choice for braised dishes like a beef stew as the process breaks down collagen and render the muscles into tender, delectable shreds. It is not ideal for short cooking methods such as grilling due to its tough connective tissue. Slow, moist and gentle cooking would, however, transform the toughness into delectable fork-tenderness.

Chuck is a popular choice for pot roasts, stews, casseroles and curries. Braising is particularly easy if you have a slow cooker. Chuck is similarly commonly used in burger blends. Marbled throughout and well-balanced in flavour with a decent beef flavour, it helps the patty achieve a substantial chew.

The filet mignon is a steak cut from the smaller end of the tenderloin. Regarded as the most expensive cut of beef, this piece of meat comes from a non-working muscle, resulting in its fork-tender texture. Due to its round and symmetrical appearance, its pretty aesthetic enables chefs to plate artful dishes.

It is a very lean cut of meat, lacking intramuscular fat. Despite this lack of fat, it still retains its title of ‘King of Steaks’ largely due to the fact that a quality piece of filet mignon can literally be cut with a fork.

Without much fat, the filet mignon is often described as rather bland and lacking “beef” flavour on its own. As such, it is common to find a piece of filet mignon served with an accompanying sauce and other accoutrements. The most common sauce is a simple pan sauce made from the steaks natural juices. Whilst searing the steak with garlic and butter can never go wrong, be sure not to overcook this delicate cut past the medium-rare point as the longer you cook it the drier and tougher it becomes.

A rib-eye steak is harvested from the rib section of beef; much like its name. Well-liked for its rich and full-flavoured generous marbling, its exceptional taste and tenderness are popular amongst restaurateurs and diners alike.

Possessing an abundance of marbling and ribbons of fat, this cut delivers that rich and exceptional tenderness. If you’re grilling on the patio, the aroma from the pieces of fat beginning to char would leave you salivating. This tender steak can undergo various forms of dry-heat cooking and still retain its tenderness. Skip the diet plan and just relish in these slices of grilled goodness. A little tip for you here, to get the most flavour out of a rib-eye, ask your butcher for steaks cut from the chuck end. 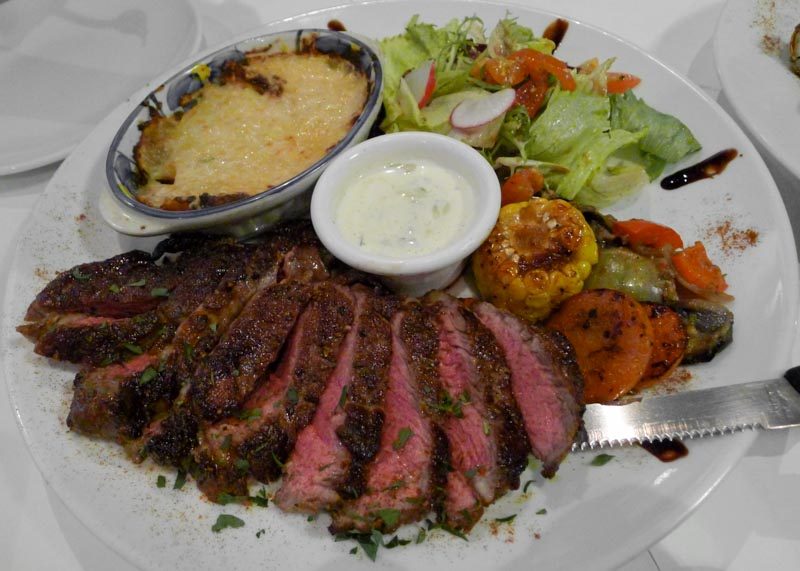 The flavour profile tends to be comparatively richer than other cuts and is best used for pan-searing. The pieces of intramuscular fat within the cut helps break down the cooking process to tenderise the meat and give it texture. Cooking the perfect steak need not be daunting and its best savoured when it’s broiled or grilled, even on a regular cast iron pan.

It is important to sear only when the cooking temperature is high as a low temperature encourages moisture to escape, resulting in a tough and rubbery steak.

Short ribs are a portion of beef taken from the rib area of cattle. The meat and bone vary in size and thickness and is a heavy, full-flavoured cut of beef. Rich in protein, they also possess a high-fat content.

Served with the bone, this cut of beef has a rust aesthetic, making it look more substantial and is also highly forgiving when cooked due to its fatty nature. Despite its slightly higher price point, short ribs are incredibly tender when cooked.

Mostly cooked low and slow, short ribs are often braised, stewed or sous vide. The long cooking time allows any connective tissue in the meat to break down, resulting in an even more tender piece of meat. The cut is prominent in Asian cultures such as Korea, where they can be found steamed alongside vegetables. It is also highly raved as a BBQ menu item, where the ribs are swiftly grilled on high heat after being marinated for a period of time.

If you’ve had corned beef or pastrami before, then you’ve had brisket. It comes from the breast of the cow, which one might associate it to be less tender. However, when it’s braised, smoked or slowly roasted, it renders soft and incredible flavour. A relatively inexpensive cut, slow cooking helps to break down the collagen in the connective tissues to achieve unctuous tenderness.

If you don’t fancy a large cut of meat, you’ll rejoice in the fact that the brisket is usually cut down further into two sections, each with slightly different qualities. The point cut is called the deckle and it is usually shaped like a triangle. It is thicker, smaller and marbled with more fat.

As compared to the flat cut, it has more flavour but less meat, which is why it is usually grounded into hamburger patties or shredded for sandwiches. The flat cut typically cost more as it is comparatively leaner, making it easier to slice uniformly.

The best way to whip up a tender and juicy brisket without drying it out with the use of a slow cooker. Alternatively, brisket is used to make corned beef cured with spices and salt before being simmered into water. If you are looking for that extra kick, a glass of beer might do the trick to elevate the flavour of the meat while adding more moisture.

I hope now you are a little amused and more equipped when you’re preparing for your weeknight dinners. Your life would be a big missed-steak if you don’t try to incorporate them with our simple stay-home recipes such as the simple stay-home burger!