SEAR: The Steaks Are High at One of Singapore’s Best Steakhouses 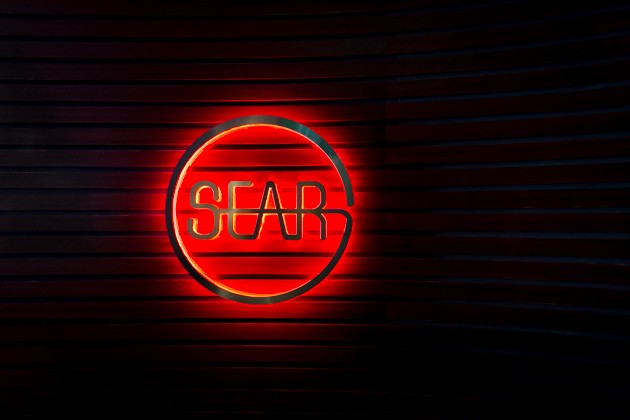 From the gilded cutlery to the charming view, the chic American steakhouse SEAR perched atop Singapore Land Tower welcomes people (office workers, businessmen and ordinary common folk like yours truly) to try its affordable quality steaks and to revel in the restaurant’s beautiful setting. I’ve always found there to be a certain allure in high ceilings and I was thus thrilled to see how SEAR, a steakhouse that prides itself in its beautiful interior decor, managed to impress with its modern-looking, tall windows and plush, velvety seats. We were able to enjoy our meal comfortably whilst basking in the lovely afternoon sun within a gloriously-air-conditioned area. Ordained with a gorgeous breeze and a lovely overhead view of Marina Bay, SEAR offers to momentarily hush your troubles away with drinks at noon or in the dark of the night on their exterior sitting deck whilst allowing you to savour the city sights. We were first served a platter of toasty Onion Bread that came with a small side of butter. As a fanatic of all sorts of breads, I was immediately drawn to this loaf of carbohydrates which was fluffy and infused with a slightly tangy taste of onion. It goes without saying that the Onion Bread tasted wonderful. It was also interesting to learn that this bread unique to SEAR is produced from the steakhouse’s central bakery where they utilize a one-of-its-kind-in-SEA pira grill oven to achieve its acclaimed SEAR effect. When we first entered SEAR, apart from the high ceilings and tall clean windows, I marveled at the collection of bottled drinks SEAR boasted against its bar’s backdrop. From the multitude of drinks offered, we were served the Catena Alamos, Malbec, 2014 ($16/glass, $85/ bottle) – a bold red wine from the beautiful wine country of Mendoza, Argentina. It is always a good idea to pair steaks with red wine so do not hold back on your alcoholic instincts in this case. The first beauty that we tried was the Black Onyx Tenderloin 250gm ($78) and it was paired with Bordelaise with Soft Bone Marrow. It was evident from this first steak that the pira grill works wonders for the outer layer of the steak was seared to perfection and the sweet and vinegary bordelaise sauce complimented the well-marinated, meaty pieces of tenderloin very nicely. We chose to have our meat cuts cooked medium-rare and I regret nothing. When cut, the slab of tenderloin revealed a rosy pink hue surrounded by a light brown layer of tenderloin. It was fascinating to learn how the reddish shade achieved in SEAR’s meat cuts comes from the year-long aging of the meat. The second meat cut we had was the Jacks Creek Ribeye 250gm ($70) which turned out to be my favourite of the three we tried. The Ribeye came with SEAR’s 5-Type Peppercorn sauce which had the right amount of piquancy and peppery taste. The slices of Ribeye were juicy, tender and came with a great deal of marbling. The fatty bits could be easily chewed and were very flavourful and one of the reasons this dish championed the other two for me. Coupled with the 5-type peppercorn sauce, the succulent strips of ribeye burst into rich waves of flavours in my mouth. Last but not least, we tried the Margaret River Wagyu Striploin 300gm ($75) which was served with SEAR’s signature sauce, the Whole Grain Mustard (an additional $4). The Wagyu striploin was very fatty which made it all the more flavourful and paired with the Whole Grain Mustard sauce which had a slight hint of vinegar, the dish did not disappoint. While the Wagyu Striploin may have been slightly tougher to chew than the Ribeye, I still greatly enjoyed this dish for the slices of meat soaked up the whole grain mustard sauce quite nicely and the overall dish thus packed a lovely punch. Apart from the steaks, we tried a few accompanying dishes like this Mac and Cheese ($16). It was love at first bite. The soft melted Parmesan and Gruyere cheese went very nicely with the buttery crumbs that were added for that added extra flavour and texture. The mac and cheese had a strong rosemary flavour which only made the pasta dish all the more beautiful. To tantalize our taste buds further, we had the side dish of Mushrooms with Rosemary and Thyme ($15). This dish of soft, moist mushrooms was heavily infused with butter and garlic which made it very tasty. The fact that the mushrooms were marinated in rosemary and thyme only brought forth the savoury flavours to a fuller degree.

My experience at SEAR was brilliant – the steaks were impeccably seared, the foods were scrumptious and the accompanying view is definitely worth the money and the time. The only complaint I might have about this delightful steakhouse would be that the nearest restroom (in order to appeal to the ambiance of the neighbouring club) was too eerily set-up for my liking.