We all know that one friend who has to have Japanese food at least once a week (okay, I’m that friend), and sometimes it can get monotonous going back to the same old haunt, with the same old options.

If you’re that friend who wants to drag your crew out for a Japanese meal, why not switch things up and share a hearty shabu-shabu hotpot at Shabu EN at Marine Parade? 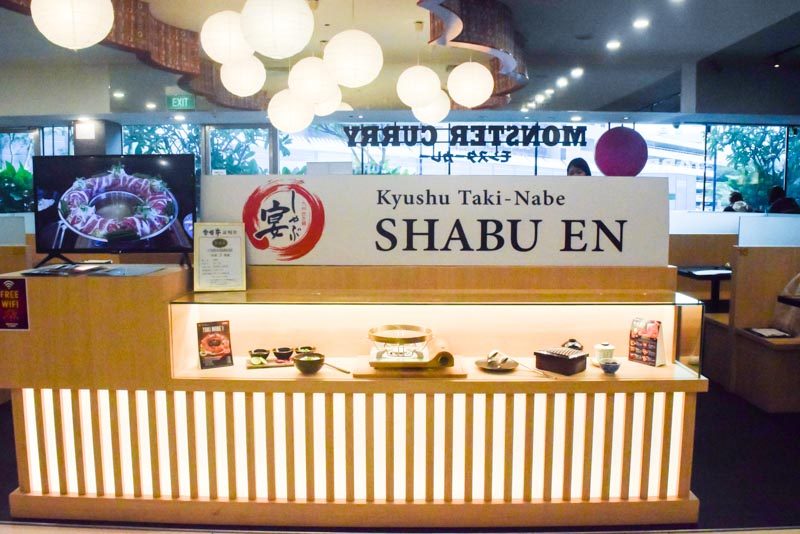 Handled by the EN Group — same peeps behind Monster Curry, EN Sakaba and EN Bar — this is the first-ever spot for Kyushu Taki Nabe hotpot in Singapore! This special Taki Nabe features a glorious amount of meat draped around a 40-cm ring of cabbage, which isn’t only a novel way to enjoy shabu-shabu, but also pretty fun to cook with friends.

They’re made to serve two people, but we’re sure there’s more than enough to feed up to four. 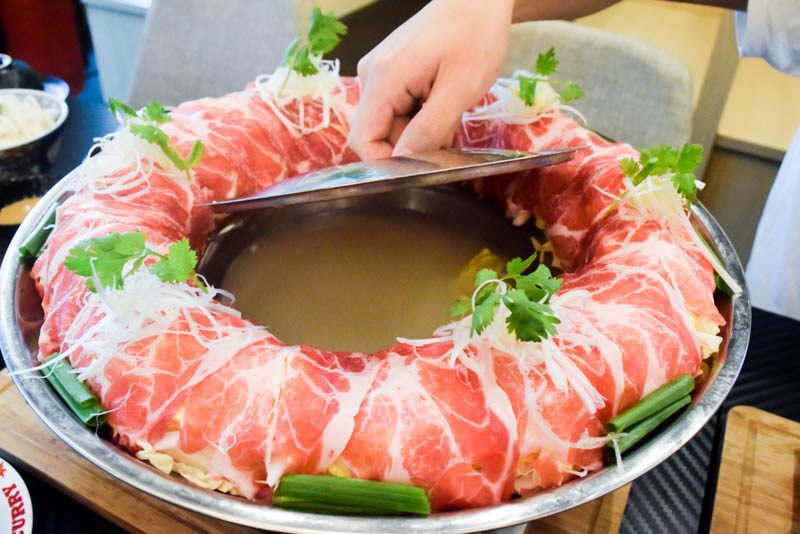 In the middle, there’s a deep pot of broth, of which you have three options — Paitan Collagen Chicken, Spicy Kara Miso, and Dashi Bonito & Kombu.

We tried the collagen and the dashi variety. For the meats, we selected the Miyazaki Wagyu & Iberico Pork Belly combo ($38.80) and the Iberico Pork Collar ($29.80). We were eagerly anticipating the moment when we could slowly watch the meat collapse into the boiling broth as we pushed it. My advice is to let it cook for only several minutes, because the meat’s sliced thinly so it cooks pretty quickly. 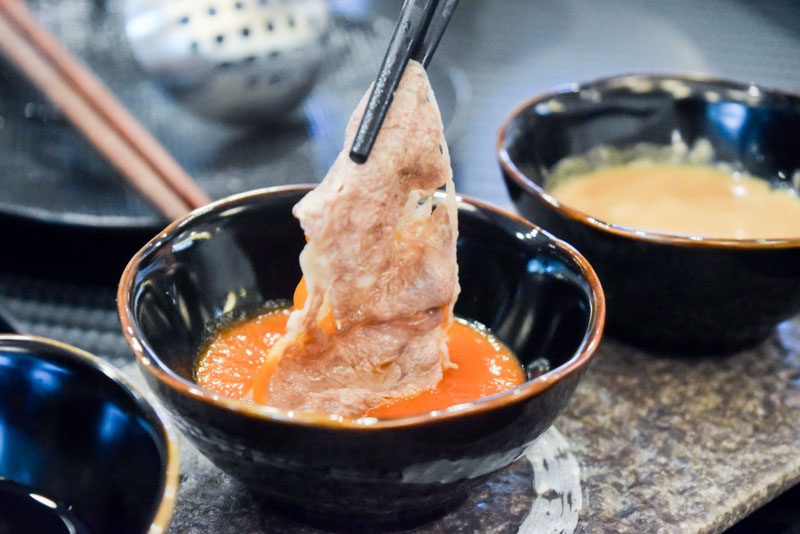 The aroma of the broth and cooked meat was very gratifying, and we tested out the first slice with a dipping of chilli sauce. The set is also served with Shiquasa Ponzu (made with lime, sake and ponzu) and Japanese Goma-dare (made with sesame, vinegar and Japanese soy sauce).

The chilli wasn’t particularly spicy, but more sour and tangy. The wagyu beef itself was incredibly tender and the fatty bits melted as I chewed. 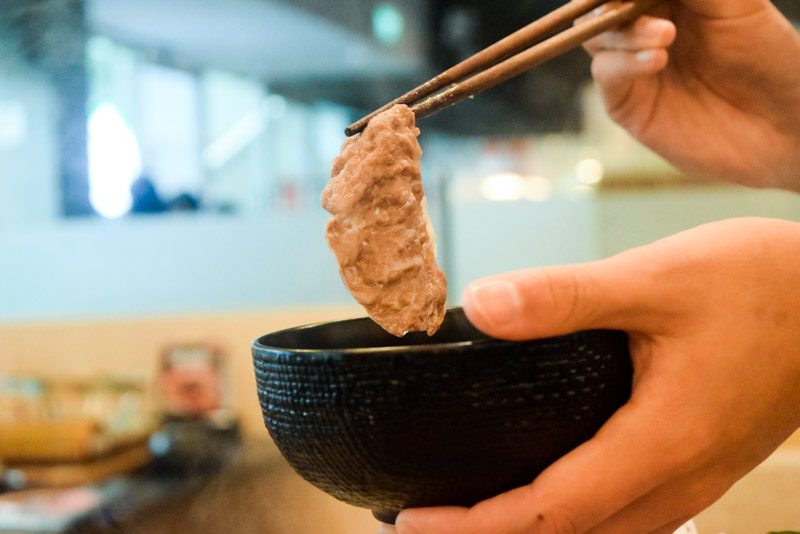 The Iberico Pork Collar was admittedly a little chewier, but it also carried a lot more flavour on its own than the wagyu beef. For some bites, I chose not to dip it in sauce, because the flavours of the broth were good enough to give it substantial seasoning.

Between the two broths, we agreed unanimously that the Paitan Collagen Chicken tasted way better, probably because it’s a lot creamier and has more depth than the Dashi Bonito & Kombu. But for those who prefer lighter broths, the latter would more than satisfy you. 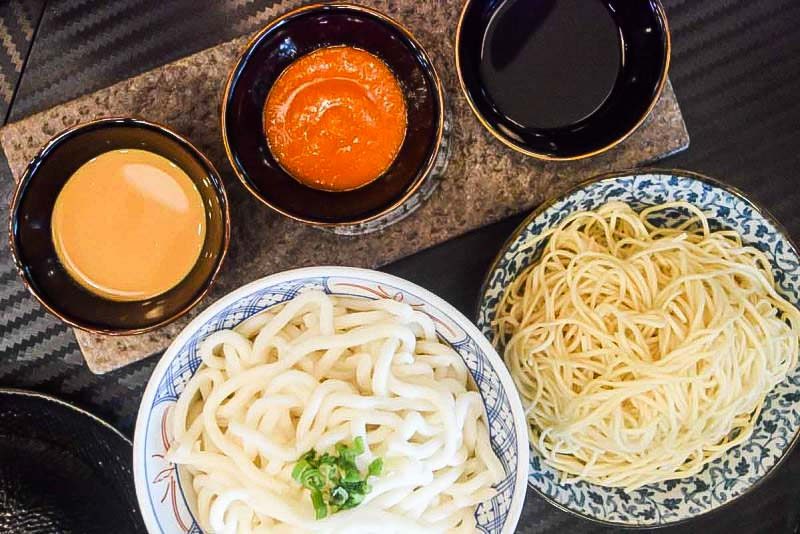 Some of us just can’t live without carbs, so there’s an option to add on Udon/Ramen for $2.50. Fair warning, since the broth is probably piping hot by this point, the noodles literally only take two to three minutes to cook. Any longer and you may just end up with mushy noodles! 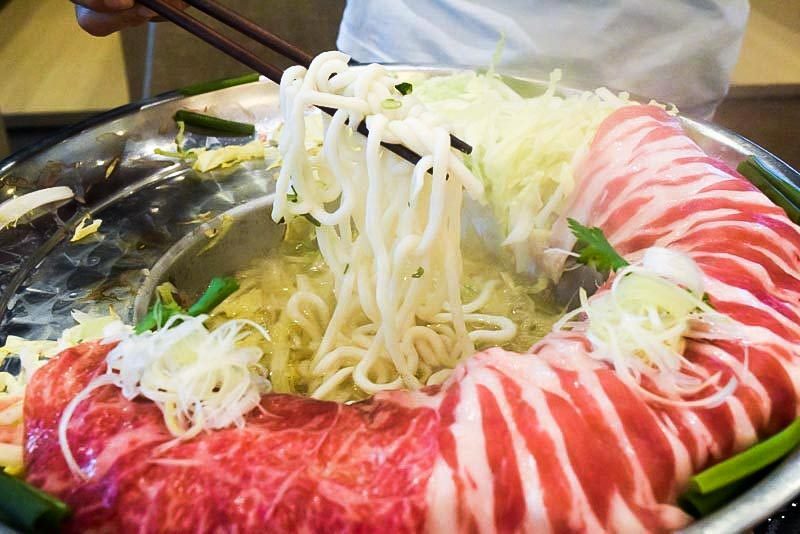 I personally preferred the ramen noodles with the Paitan Collagen Chicken broth better, because it soaked up all the creamy goodness and made for an extremely savoury bowl, especially since it was raining that day. 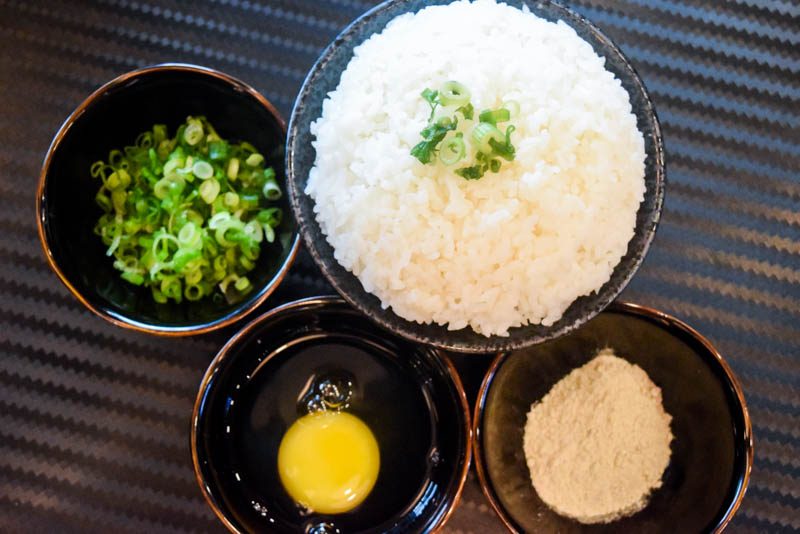 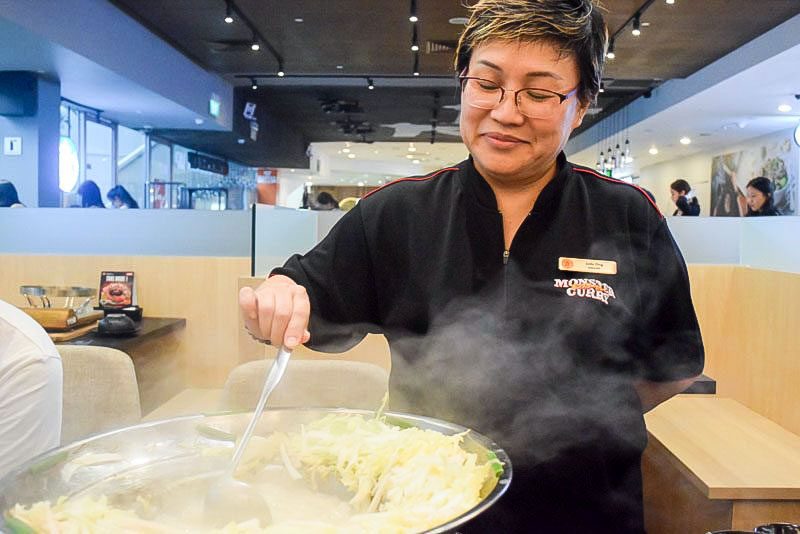 Should you be less-than-confident about preparing the porridge yourself, don’t hesitate to ask a friendly server to assist you (which we did)! 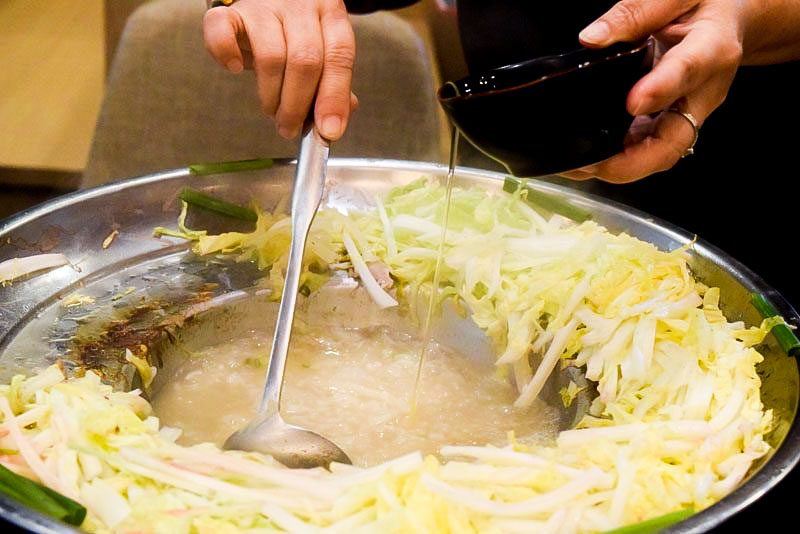 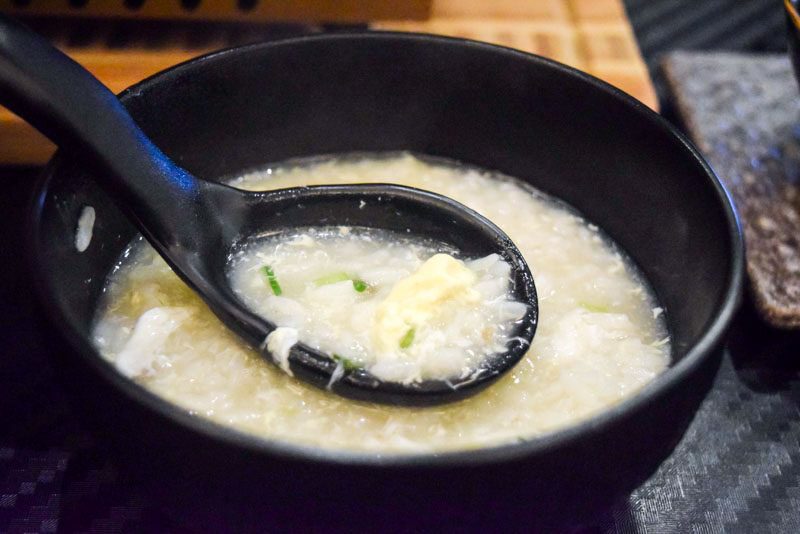 Initially, we were all very satisfied with just having the shabu-shabu on its own… till we tried the Paitan Collagen Chicken broth made into a porridge! It was utterly comforting and peppery; we couldn’t stop slurping it up. 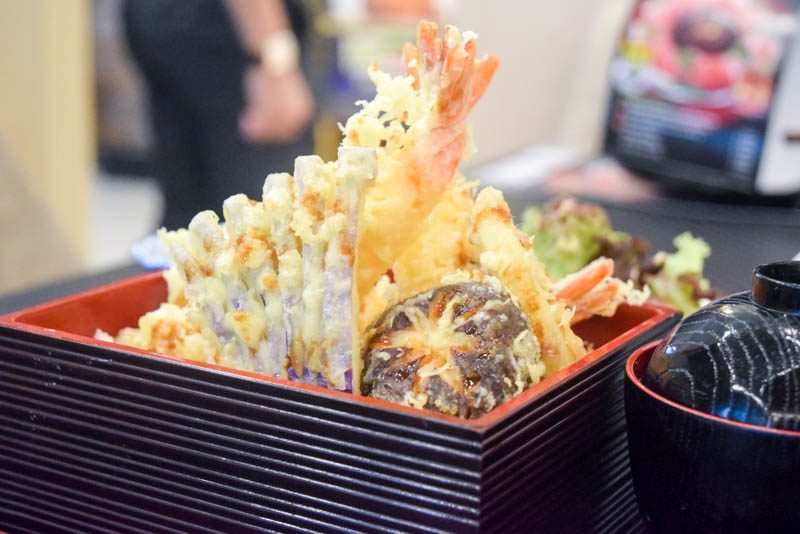 Besides their signature Taki Nabe, you can also opt for their bento sets like the Tendon Set ($14.80), which came with large tempura-battered vegetables and three large prawns. We liked the deep-fried ingredients, but didn’t care much for the rice beneath as it was quite dry. 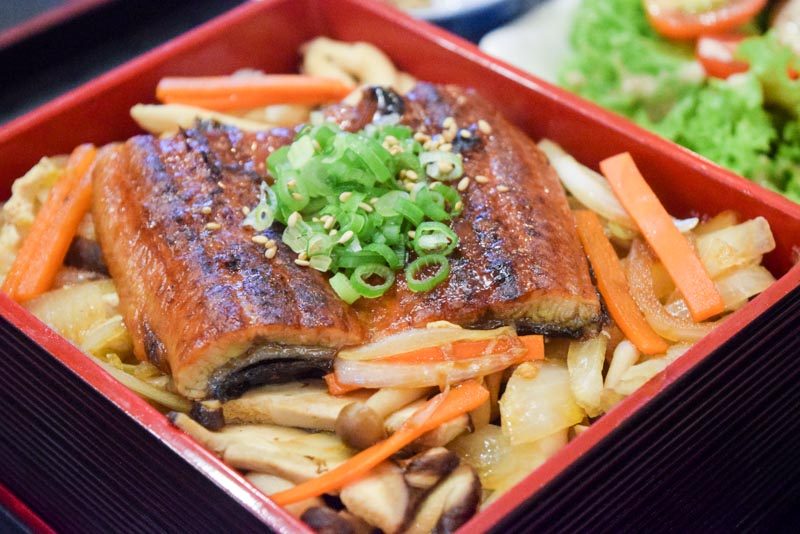 Unagi fans can enjoy their fill here with the Unatama Set ($15.80). It wasn’t as amazing as unagi specialty restaurants, but the unagi portion was rather generous and was served on a bed of assorted vegetables, mushrooms and egg with rice.

Again, the rice by itself fell flat, and we wished that the vegetables had more flavour to them.

Although there were three of us attempting to finish the Taki Nabe, we still couldn’t do it. Of course, we also ordered other items, but having tried and tested it for ourselves, we implore you to jio all your hotpot buddies to share in the feast!

Don’t forget to order the Japanese Porridge add-on either; it’s well worth the extra carbs.