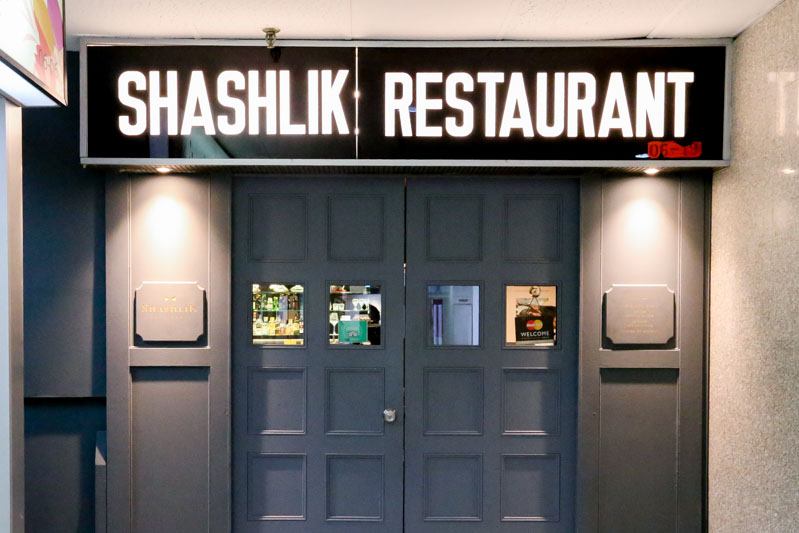 Ask your parents about Shashlik Restaurant and you’ll be met with a fond smile about the charming 33-year-old restaurant tucked away on the top floor of Far East Shopping Centre. 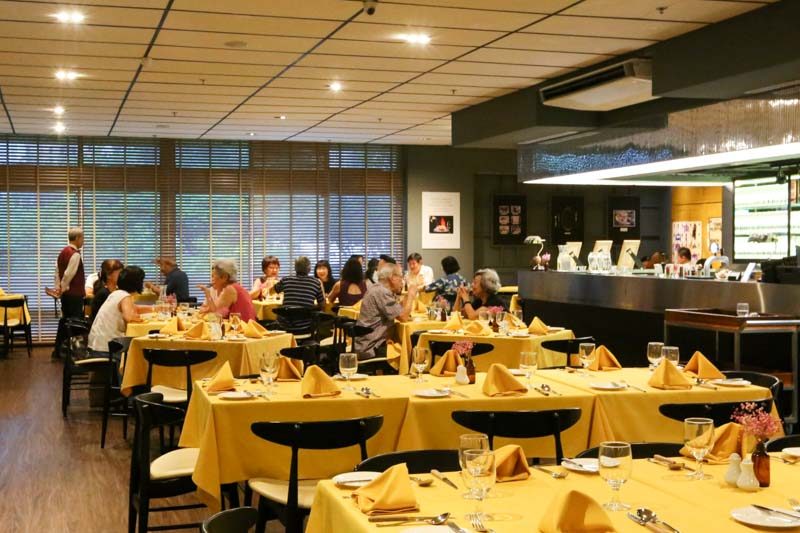 When you first step into Shaslik Restaurant, you’ll see that Shaslik has retained much of its old-world glamour. The waiters are donned in snazzy uniforms complete with a smart bow tie, while the tables are dressed in their signature mustard yellow, an iconic feature Shashlik Restaurant has retained since they opened in 1986. 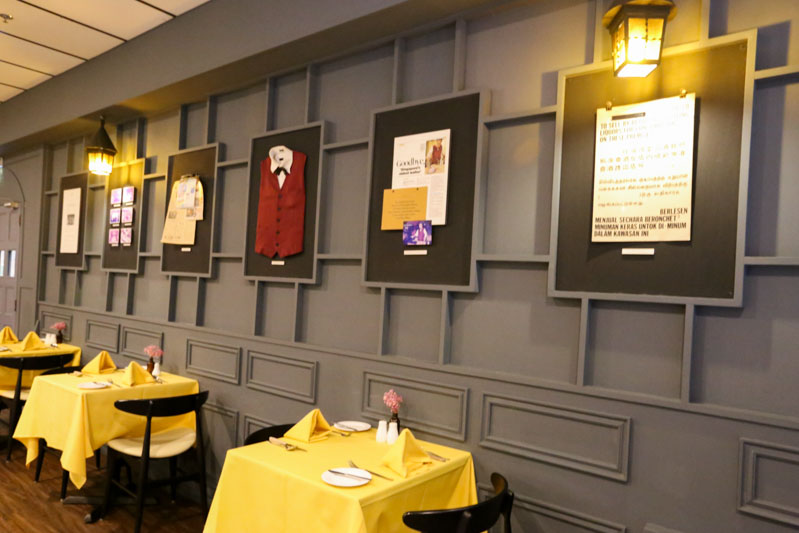 Their restaurant also functions as a little museum of sorts, as their walls proudly display faded photographs of Shaslik Restuarant in the early days, with newspaper clippings and even the uniform of Captain and Head Waiter of the late Mr Tan Niap Hin.

It’s a restaurant that is indeed full of character and teeming with nostalgia. 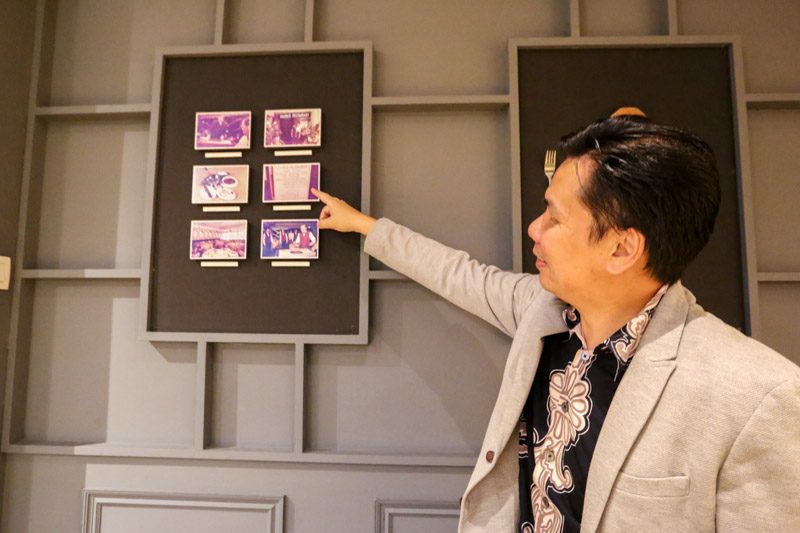 I spent the afternoon with Alan Tan, a second-generation owner of Shashlik or more endearingly known as one-half of the Shashlik ah kors. As Alan introduces the Shashlik Restaurant to me, I realised that Shashlik’s history is as rich as their famous Borsch Soup (S$7).

Shashlik began as the brainchild of nine former employees of Russian-Hainanese Troika Restaurant. When Troika went belly up, spurred on by their passion for food, these nine employees pooled their savings together and Shashlik Restaurant was born.

Shashlik Restaurant then went on to serve generations of patrons. They watched as regulars become newlyweds, parents as even grandparents, all the while serving their well-loved favourites, Shashlik Restaurant was there for all the milestones. 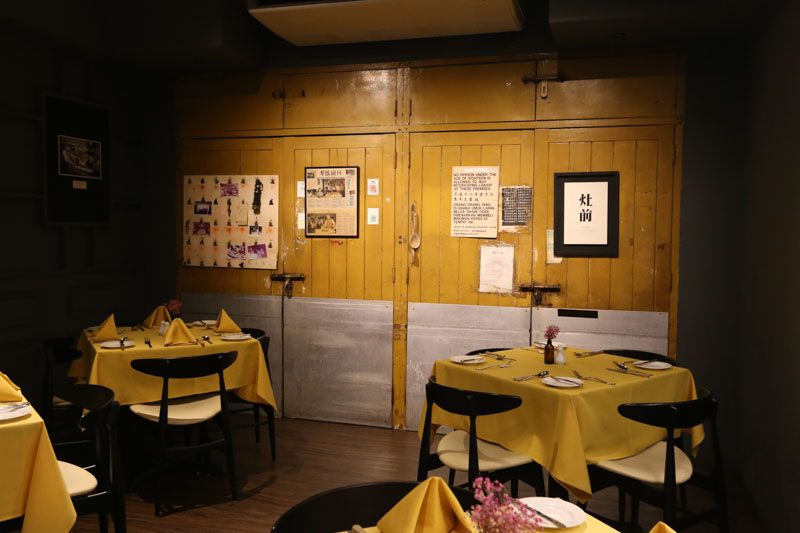 Of course, Alan being quite the Shashlik-phile, kept a couple of nostalgic items. At the far end of the restaurant, you’ll find the original doors to Shashlik’s kitchen, complete with scuff marks from torn off receipts and old hooks that held well-used pots and pans.

With so much history imbued into the walls of Shashlik, I couldn’t wait to see what this 30-year-old restaurant had to offer. 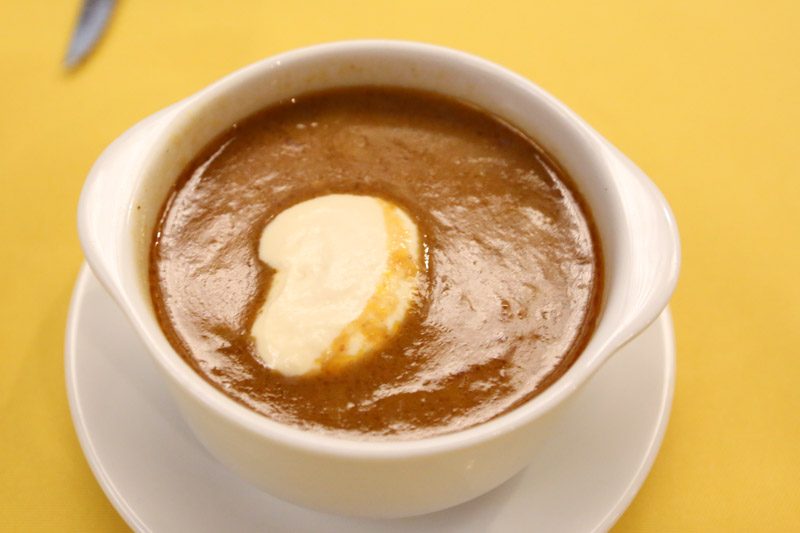 I began with a true Shashlik classic, Borsch Soup. Instead of the deep-pink hue that I normally associate Borsch with, this bowl resembled a bowl of rich minestrone with a lovely dollop of sour cream in the middle.

Shashlik has stuck to the traditional beetroot for their soup base, but expect this to taste a lot more savoury than traditional Russian Borsch. 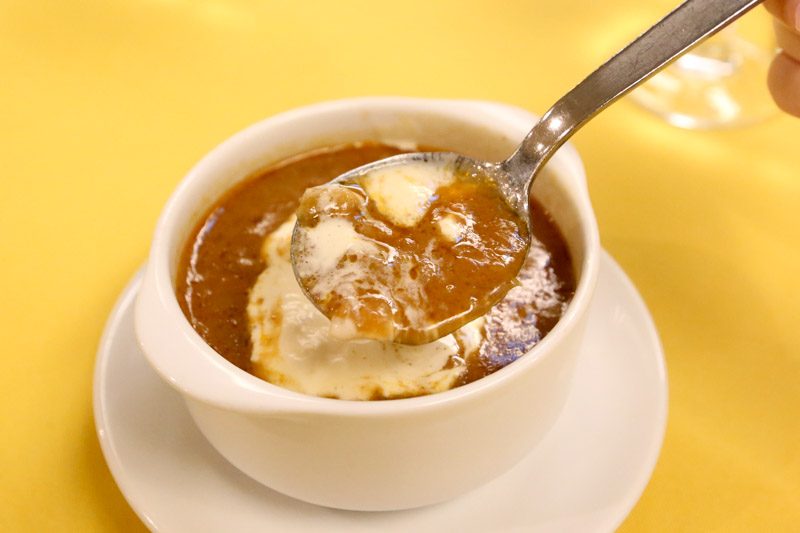 The sour cream did make this borsch a little more indulgent and coupled with tender chunks of beef brisket, it made for a hearty and rich mouthful. The soup was sweet and while the onion flavour was prominent, I would have liked just a little more caramelisation. Nonetheless, this onion soup was still satisfying and hit the spot. 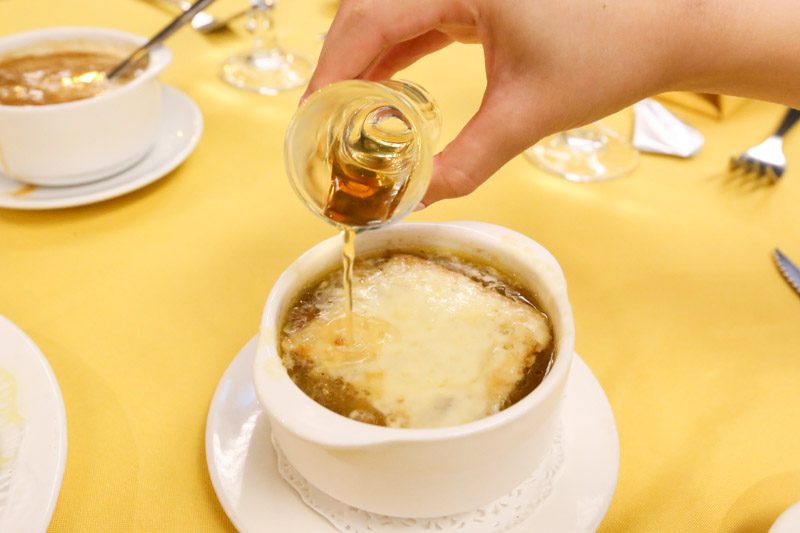 If you would like a little more oomph to the soup, I suggest pouring a liberal amount of brandy that accompanies it into your onion soup. The brandy accentuates the sweetness of the onions as well as the savouriness of the beef stock, making it an even more lip-smacking spoonful.

A simple but well-executed bowl of soup, there were definitely no complaints here. 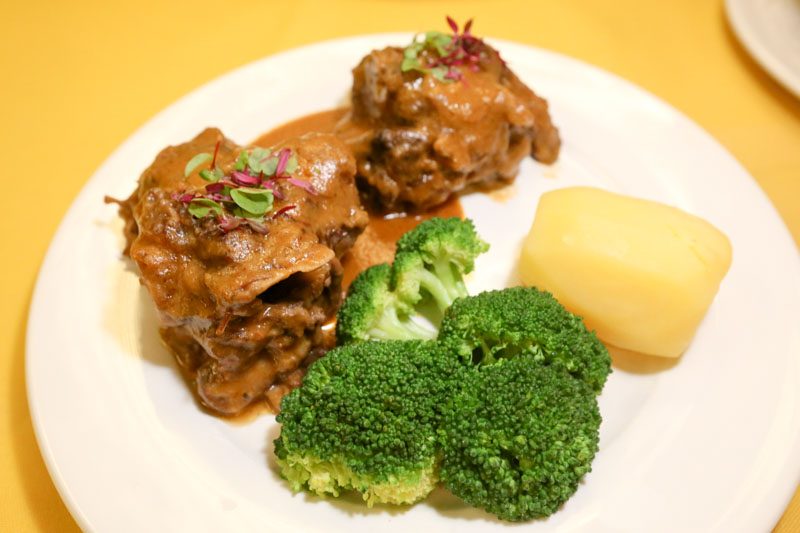 Next up, was Shashlik’s legendary Oxtail Stew (S$16.80 with the lunch set). I was told I was pretty lucky having arrived on a Wednesday since the only other time Shashlik serves their oxtail stew is during the weekend.

It was a pretty straightforward dish; we had two glorious portions of oxtail smothered in a thick and rich gravy alongside a plain boiled potato and some broccoli. No prizes for guessing who the star is here. 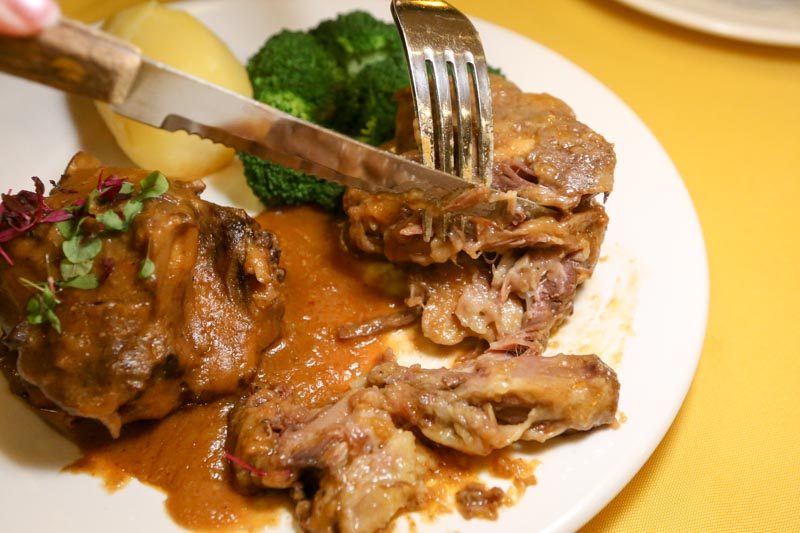 Now, it’s common knowledge amongst us foodies, that oxtail is quite a rewarding piece of meat when prepared well. This cut of meat is gelatin-rich with higher fat content, so when it’s slow-cooked all that flavour intensifies, resulting in rich, fork-tender meat.

For Shashlik, they slow-cook their meat for a whopping 36 hours to ensure to break down that well-used muscle. It takes a lot of work, which is one of the reasons they only serve it on Wednesdays and weekends. Their oxtail did not disappoint; the meat was soft and gave way with barely any resistance. The meat was immensely flavourful, while the robust gravy sealed the deal for me. Tasty and gratifying, this was one for the books. 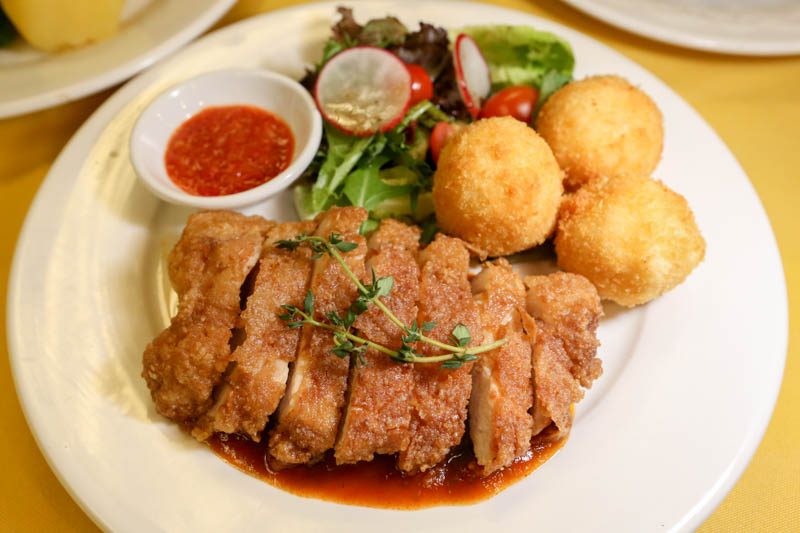 For the archetypal Hainanese dish, the Hainanese Pork Chop (S$16.80 with the lunch set) is a good bet. A thing to look out for in any Hainanese pork chop is that crust. Instead of normal breading, pounded up crackers are used instead, which gave it that unique toasty flavour. 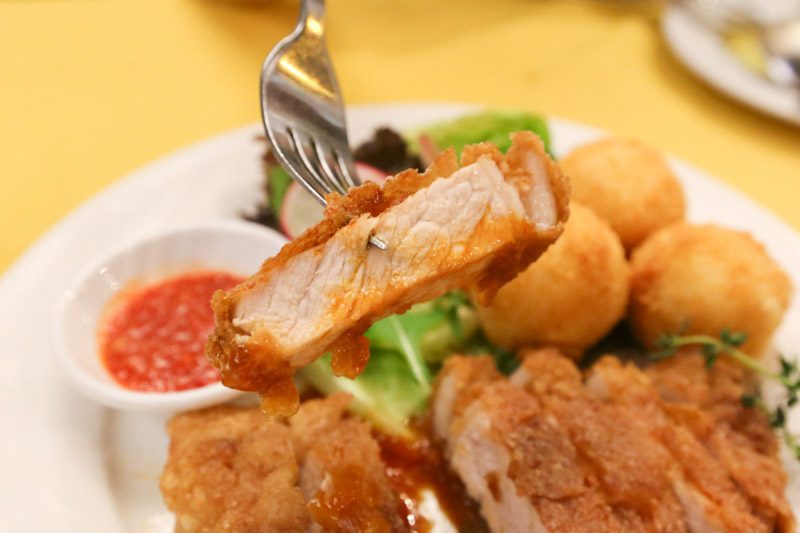 For a cutlet as thick as this, I was impressed that it wasn’t as tough or dry as one would expect. The pork was well-seasoned and the crust was delightfully thin and crispy. 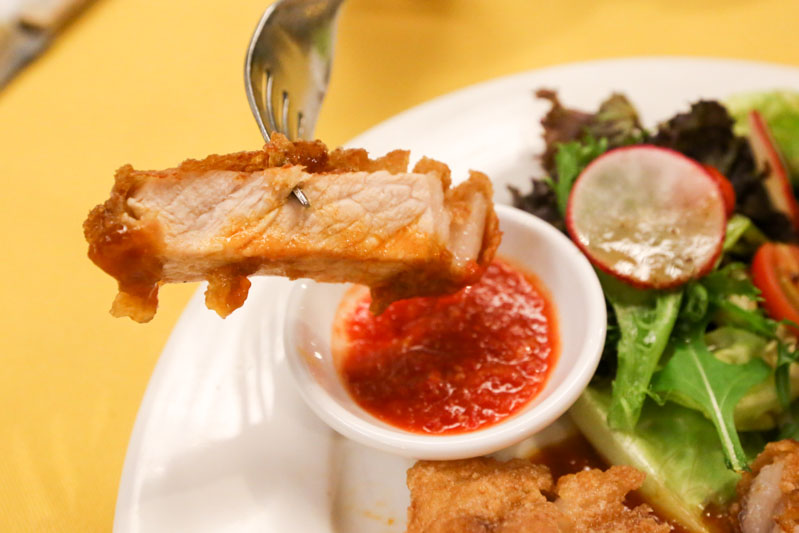 Ever the Asian, everything seems to taste better with a little bit of chilli. Modelled after chicken rice chilli, this one was piquant with just the right kick to keep you coming back for more. 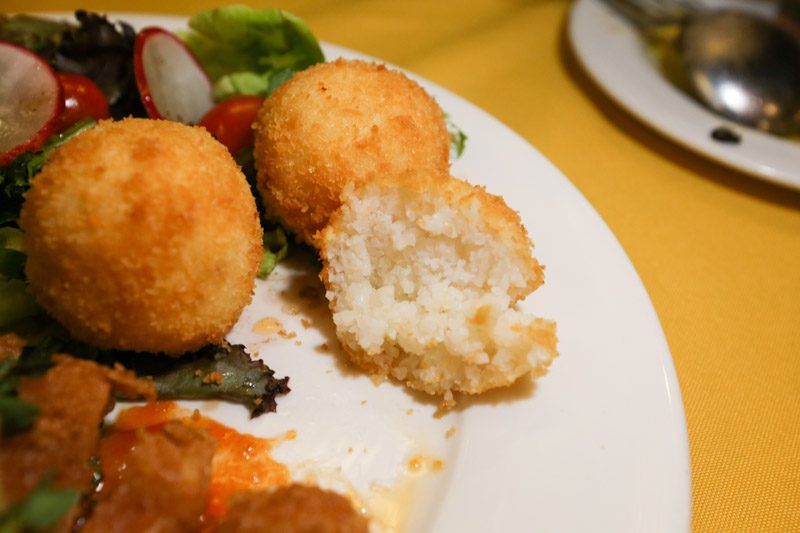 Something special that I noticed was these fried balls that were served on the side. They resembled arancini balls but I wasn’t sure. I warranted a guess with Alan and turns out I was right, but they were made with a Shashlik twist (of course). 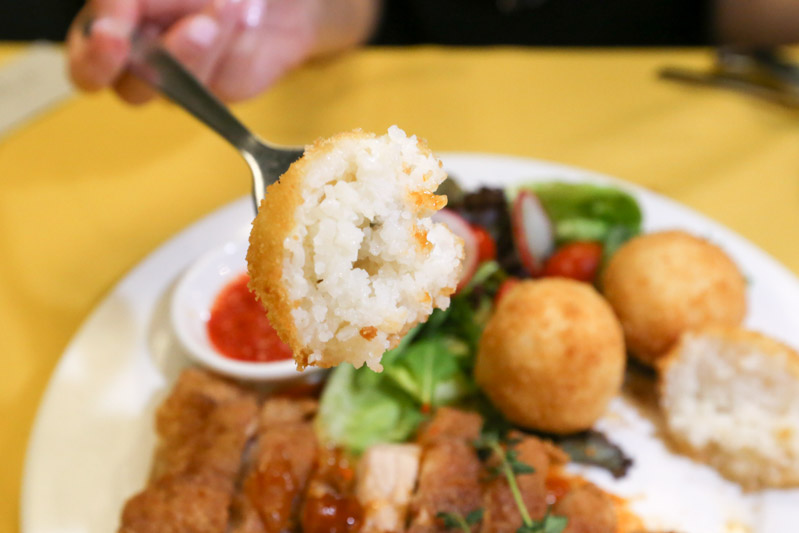 To keep things interesting and rather than serving up just rice with the cutlet, Shashlik has chosen to fry up some chicken rice for texture and novelty. While I did enjoy the presentation and the crispy exterior, I would have liked just a smidge more flavour in the rice. 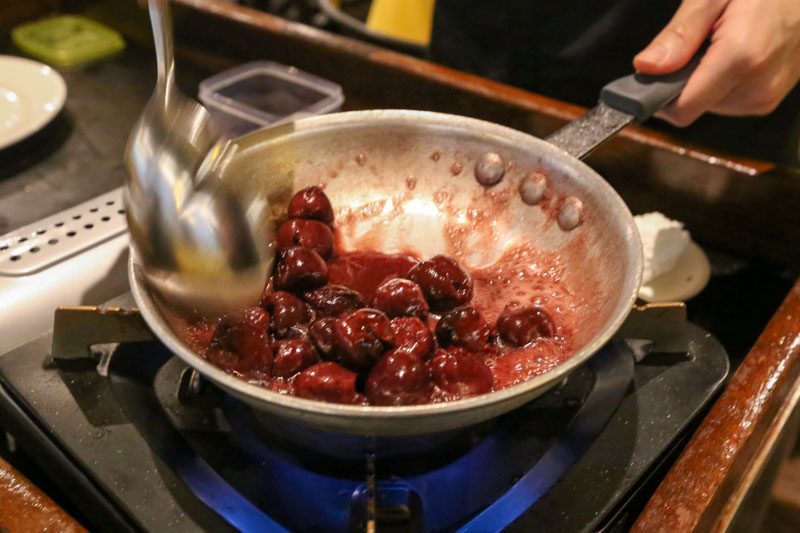 Shashlik is one of the few restaurants that have still have tableside service and makes for quite the dining experience. I know most loyal patrons would opt for Baked Alaska (S$24) but Alan suggested that I try Cherries Jubilee (S$26) which is also prepared à la minute. 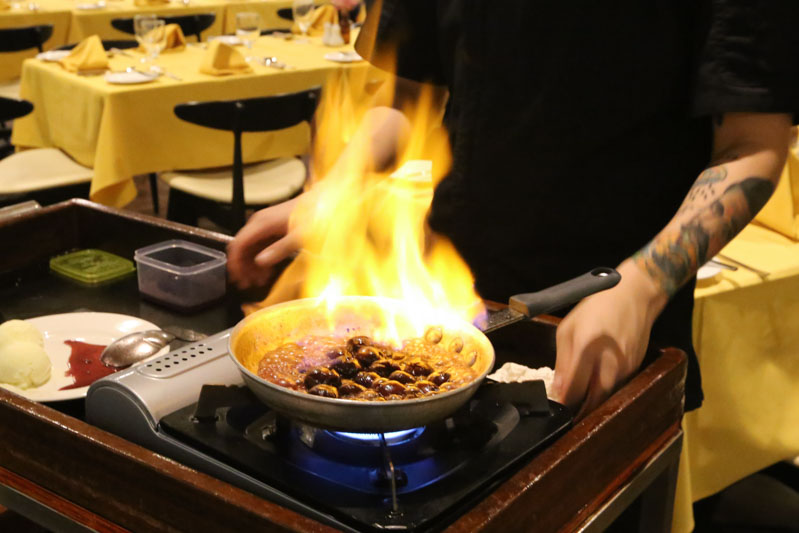 These are cherries that are flambéd right in front of you and served with two scoops of ice cream. As the brilliant flames burst forth from the pan, you bet my phone was at the ready to capture the moment. When the excitement quelled and the flames settled, I eagerly dug a spoon into the sticky cherries. They were sweet, syrupy but thankfully not cloying. I especially loved how the warm cherries mingled with the cool and creamy vanilla ice cream—an old-school dessert that’s perfect to end your meal at Shashlik. 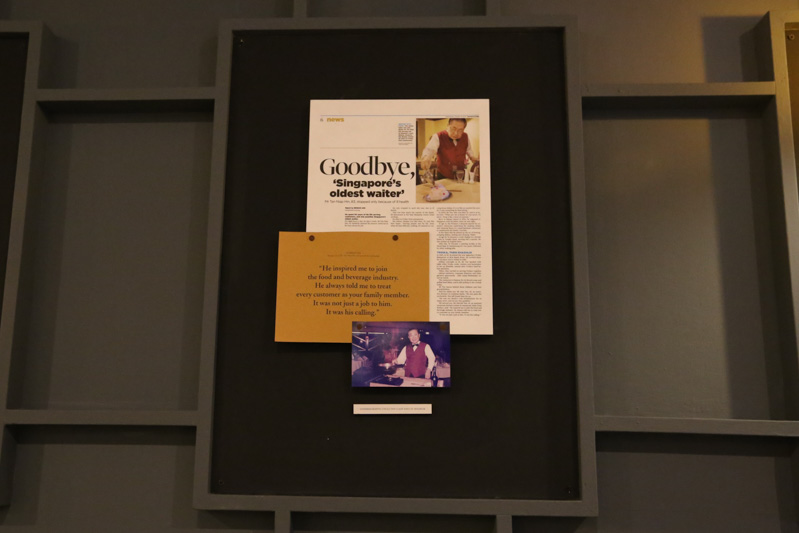 What moved me particularly about Shashlik was a love letter to Alan’s father, the late Mr Tan. While Alan has modernised Shashlik, Mr Tan’s legacy still permeates every part of his restaurant and that is truly part of Shashlik’s charm.

While I will always be an advocate of our Singaporean hawker culture, something has to be said about preserving our homegrown restaurants, especially ones with such an important history.