Located in the heart of Clarke Quay‘s nightlife scene and open till the wee hours of the morning, Spice World Hotpot is the place to head for a nice, warm meal to wind down after your night at the club. 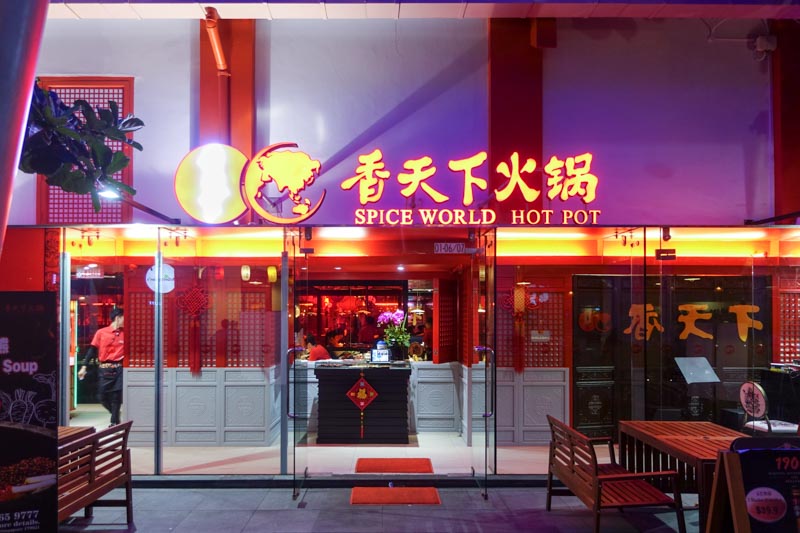 When you walk in, you’ll notice how red the decor is, with crimson panels separating the tables but I guess that makes sense considering how red is an auspicious colour in Chinese culture. 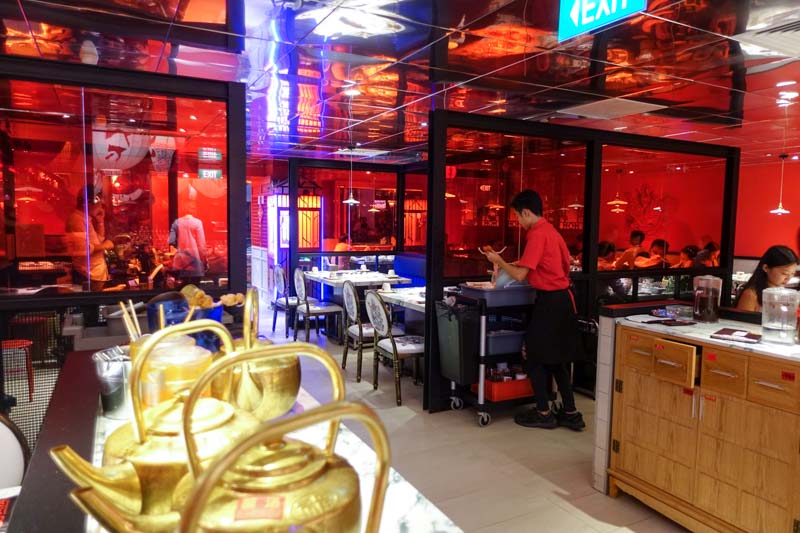 Unlike the usual Hai Di Lao or Beauty In A Pot, Spice World offers us some pretty Instagram-able dishes, and at affordable prices while they’re at it.

Since you’re most likely to head down with friends, you’d usually want to get more than just one soup base. We had the Yinyang Two-Flavour Broth ($22.90) but if that still doesn’t satiate you, Spice World also has the option of the Benz Three-Flavour Broth ($25.90) too. Get it? Benz because the pot split three ways looks like the Mercedes logo? 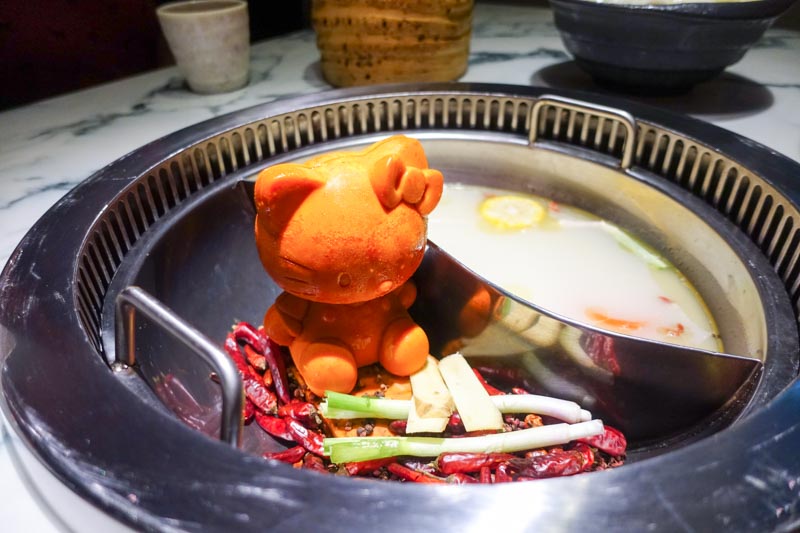 The first thing that comes to mind when someone mentions Spice World is their adorable Mala broths. We had the Hello Kitty Mala Butter ($9.90) and whether you’re a Hello Kitty fan or not, you’ve got to admit – having an edible version of the Sanrio Character sitting in your hotpot is pretty cute.

They also have a teddy bear version if Hello Kitty’s not really your thing. I watched in ambivalence as the waiter poured scalding hot soup over my Mala Hello Kitty. I guess this was goodbye?

The other broth we had was the Pig’s Belly and Chicken Soup Broth ($19.90 for single selection). Now don’t be too quick to dismiss it as yucky the moment pig’s belly is mentioned because this was one hell of a soup.

Boasting surprisingly creamy flavours, everyone at the table agreed that although we didn’t expect to like this soup so much, we ended up being so helplessly drawn to it. 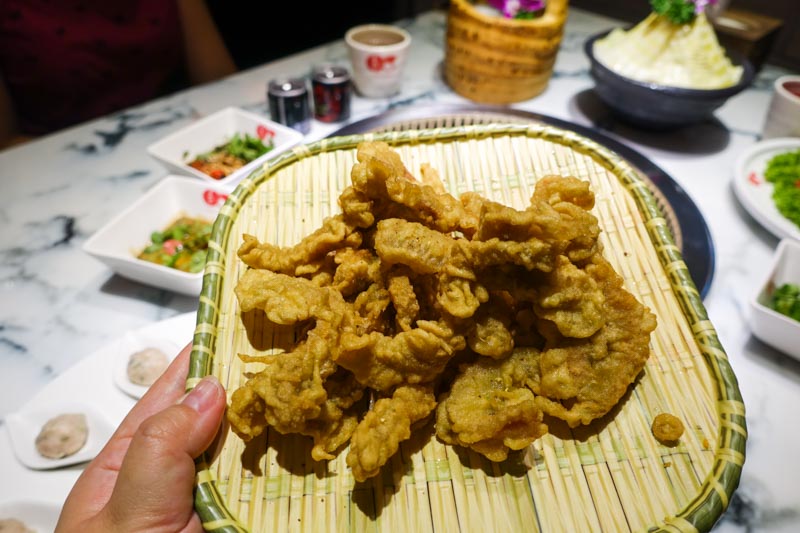 While waiting for the soup to boil, our stomachs were kept occupied by the 5 spice powder deep fried pork slices ($12.90). I thought it was gonna be pretty tough since pork dries out quite easily, but this was actually quite easy to bite off, and the batter was well-flavoured. 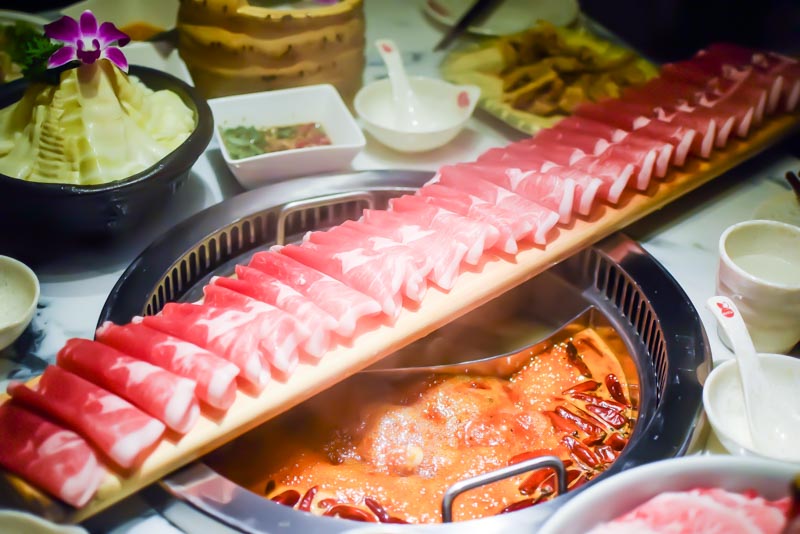 Something else that draws crowds in every time is the One Metre-Long Mutton Slices ($28.90) and I couldn’t help but measured it against my arm just to be sure. At such a magnificent length, the table could hardly contain it and we had to place it over the soup pot just to fit it into the shot.

The mutton slices were so tender and thinly-sliced, they fell apart almost immediately in my mouth. So bring your meat-loving friends, because this one’s sure to get them excited. 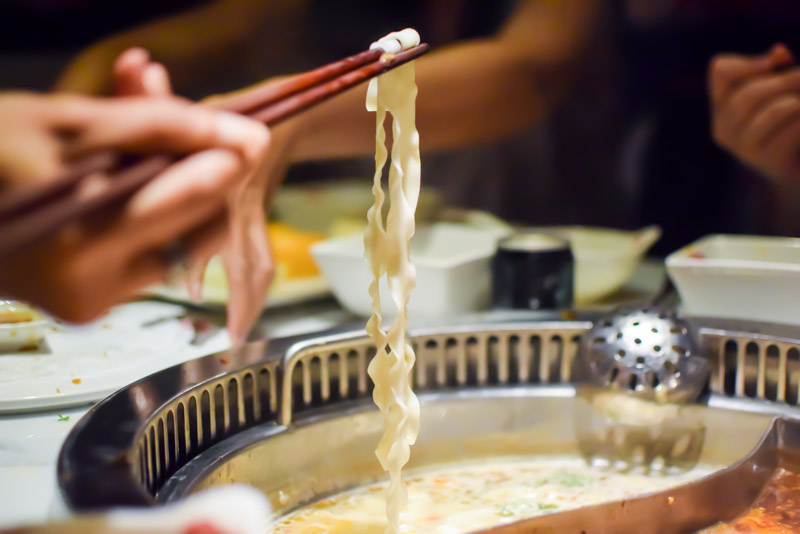 The only form of carbs that we had for the night was the Handmade Da Shao Mian ($3.90) (translated to Knife Cut Noodles). This isn’t like your usual la main (hand-pulled noodles) where each strand is more or less equal in length and shape.

Instead, do expect some irregularities due to the nature of it being hand-cut, but I think that’s the beauty of it! Springy, firm or soft – the best part about hotpot is that you get to cook your noodles however you want them. 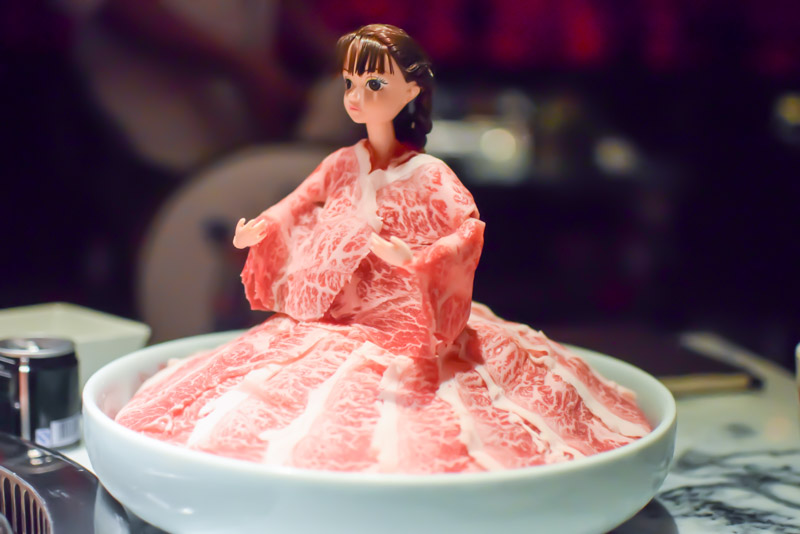 Yet another dish that most people come to experience is the Premium Barbie Australian Wagyu Beef Slices ($38.90), but I personally like to say she’s a Barbie girl in a spicy world.

Most might dismiss this dish as merely gimmicky, but I’d say it’s actually really good. 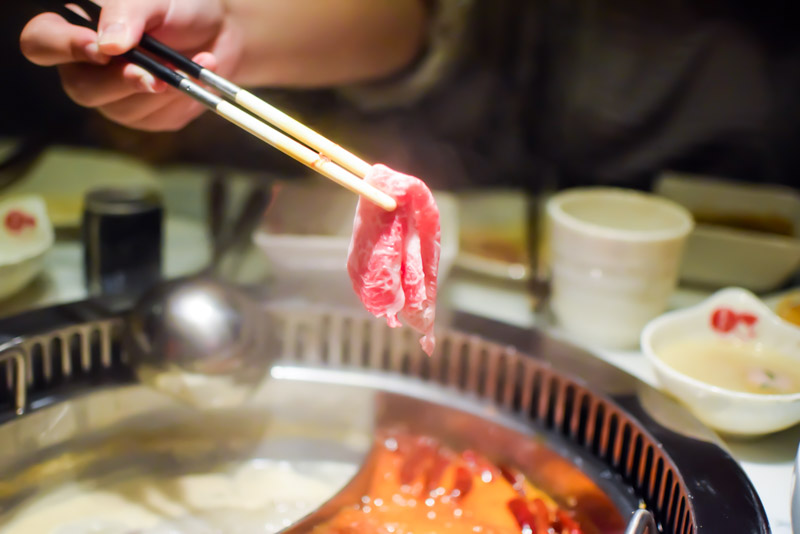 Apart from the fact that they just recreated Lady Gaga’s Meat Dress into an edible version, it’s so yummy at that! Looking at the magnificent marbling of the beef, you can tell that the beef was in no way inferior. 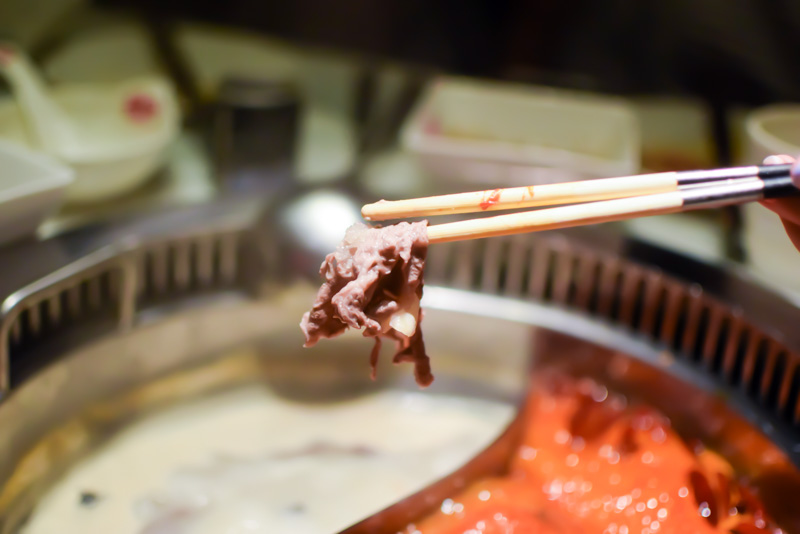 All we had to do was to dip the beef slices into the soup about three times before sending it straight into our mouths. Interestingly, our host told us, many diners tend to leave behind the last slice of beef covering the doll’s chest.

Perhaps it’s their way of preserving her dignity? My colleague whispered over to me that she was looking forward most to the Handmade Pork Belly Parsley Balls ($10.90) and she told me that she wasn’t disappointed at all.

The parsley gave it a subtle fragrance and that the pork balls had just the right amount of springiness, making it her favourite dish of the night. 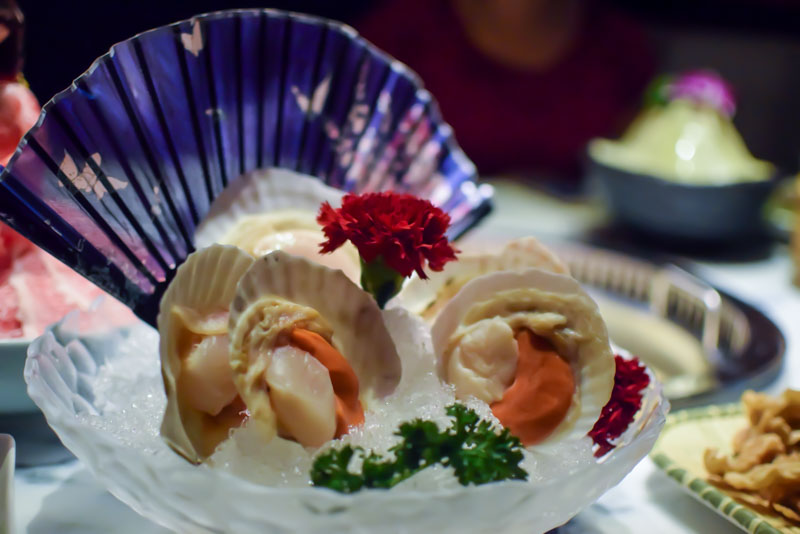 I’m a huge fan of scallops, so these King Scallops ($16.90) obviously got me pretty hyped. As you can see, the scallop skirts and roe are left on to assure their customers that their scallops are fresh. 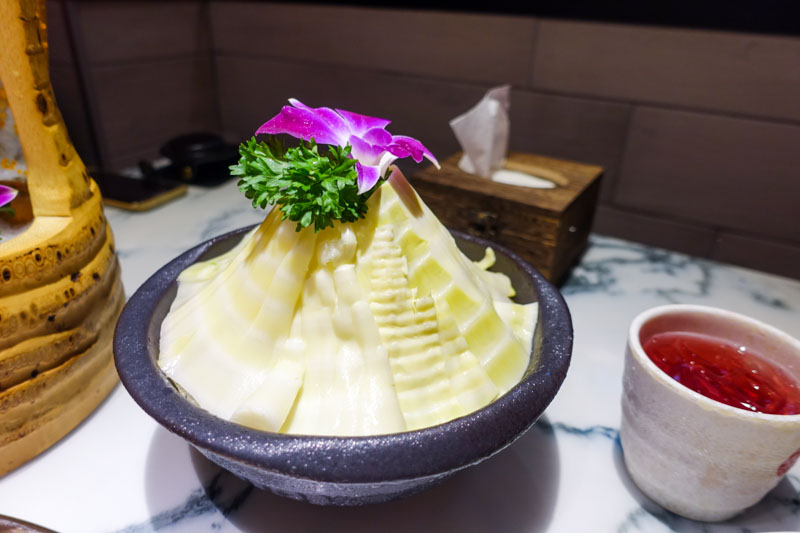 Taking a break from all the meat, we had the King Bamboo Shoot Tips ($18.90) that provided an extra crunch in between bites. Nothing really that special, but usually, a must-order at hotpot meals, as I’ve observed. 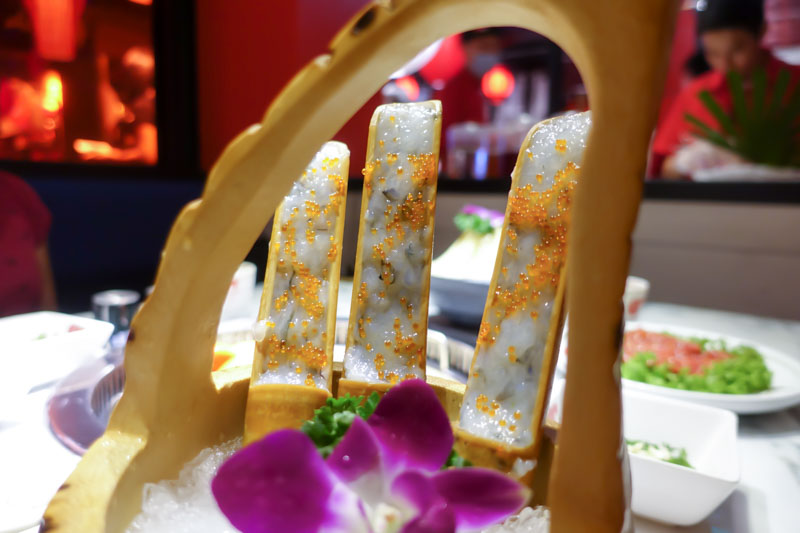 The Shrimp Paste ($18.90) was a huge delight because I love both shrimp and roe, making this the ultimate combination for me. It’s meant to be scraped off chunk by chunk straight into the pot, so that means you get to control how big each piece is too.

When cooked, the shrimp was springy and flavourful, any fresher you’d have to catch the shrimp yourself. As yummy as it might be however, $18.60 for three strips of shrimp paste seemed kinda pricey to me. 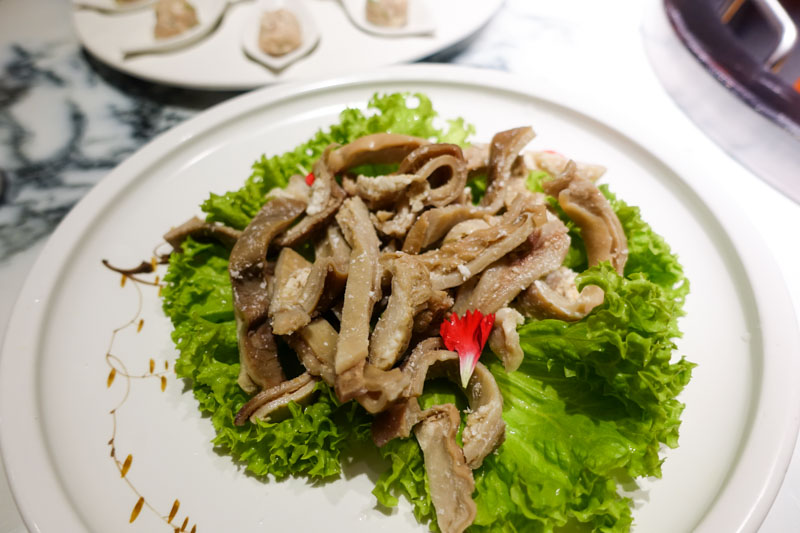 The other cooked dish we had was the Fried Pig Tripe ($12.90), which I really enjoyed because of its chewiness. I suggest you have it dipped in soya sauce and chilli padi too, for that extra kick of flavour.

I never expected one of my favourite dishes of the night to be a vegetable, but here we are. The Green Shoots ($8.90) that you see here are actually a species of vegetables called Celtuce, which is a mix of celery and lettuce.

It had a gourd-like texture and the crunchiness really made me swoon. It soaks up the broth pretty well, so putting it in the Mala broth is a guaranteed road to yumminess. This was the Signature Tender Beef Chuck ($13.90) and they weren’t kidding about the tender part. It was so soft it felt as though I was eating fat rather than meat, but it wasn’t really my thing.

You should go for it though if you’re the meat-that-melts-in-your-mouth kind of person. 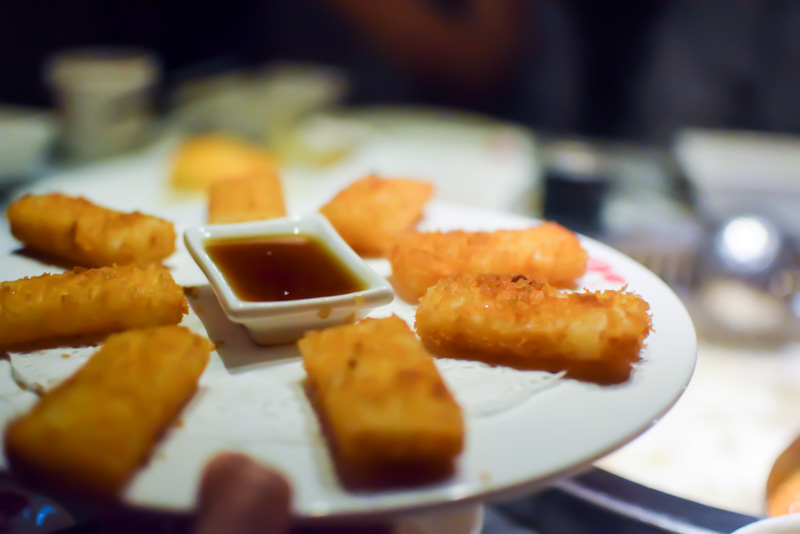 We were served the Glutinous Rice Cakes with Brown Sugar Syrup ($7.90) last, adding a sweet touch to round up our feast. I’m not a huge fan of brown sugar nor glutinous rice, so I didn’t expect myself to like the dish, to be honest.

But the very first bite that I took changed my mind immediately, the rice cake had a subtle kind of sugariness that was easy to like. If you want to take it all the way, then the brown sugar acts as that extra oomph. 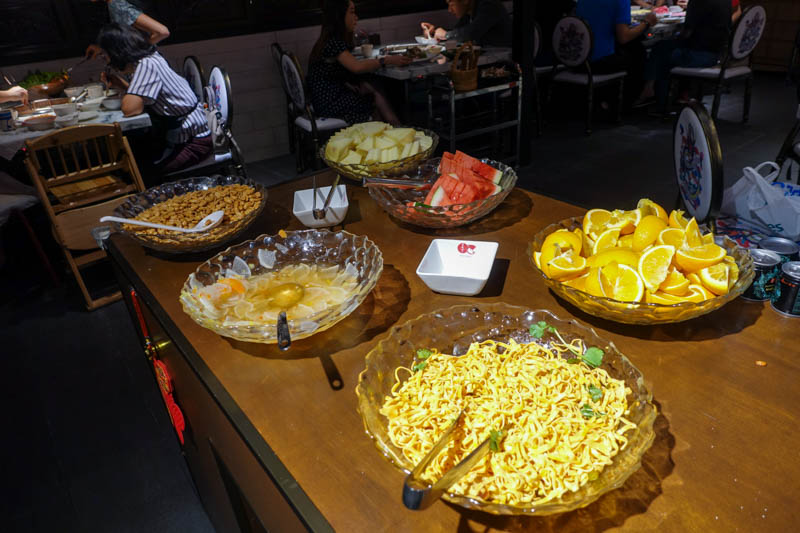 To cleanse your palate of the strong flavours from before, Spice World also has a small fruits table where you can help yourself to watermelon, orange and rockmelon slices. They also say that having fruits at the end of a heavy meal helps cope with the food coma, so why not?

Our host told us that there have been plans to expand, so I’m looking forward to seeing more Teddy bear Mala broths and Wagyu Barbies around, but for now, they’re just keeping at bettering their current pioneer outlet.

So if you’re in the area for a wild night out, don’t forget to pop in to get your spice on.

ChopeDeals: Save 35% at Spice World Hotpot >

Previous articleJAAN: Experience Flavours Of Devon (England) In The New Spring 2018 Menu At City Hall
Next articleBecome A Durian Master At This Workshop In Serangoon North On 23 June B3: Affordable Seafood Pasta, Western Food & Happy Hours At This...