Located in Geylang, Tan Ser Seng Herbs Restaurant is one of the remaining turtle soup restaurants in Singapore, and the first to cook turtle soup in a claypot.

The rich turtle soup is made daily with quality ingredients and fresh turtle meat. Simmered for more than 12 hours every day, it’s hearty, full of collagen, healthy and absolutely delicious. The authentic recipe dates back to 1946! 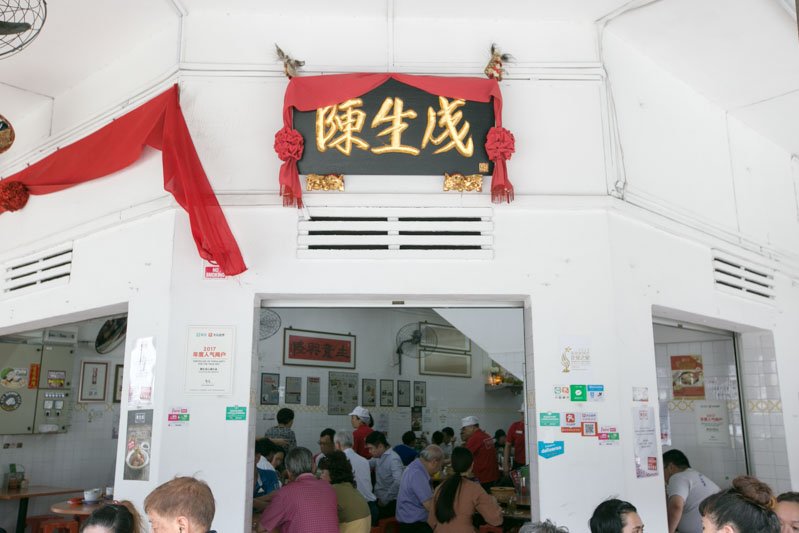 Tan Ser Seng Herbs Restaurant was founded in 1946 by Tan Ah Sai. He’s a humble cook and entrepreneur from China who migrated to Singapore.

Tan Ah Sai brought the unique trade of turtle soup to Singapore and began by peddling his herbal broth along Orchard Road.

His first shop was at Cuppage Centre, then he moved Lorong Tai Seng, then MacPherson and Joo Chiat. Finally, the restaurant settled at Geylang in 1992. Though Tan Ah Sai has since passed away, his recipes and quality herbal soups live on. His son, Tan Khar Seng, took over the business and quickly roped in his son, daughter and son-in-law. They cook the soups from scratch and serve customers all day long.

Now, the Tan family wake up at 3am every day to prepare the soups. Five hours are spent preparing the herbs and fresh turtle meat, and the restaurant opens for business at 11am sharp, just in time for the lunch crowd.

The lunch crowd comes in fast and furious. Tables were filled with both young and old alike, with tables and chairs even strewn along the walkways! The star of Tan Ser Seng Herbs Restaurant’s menu was definitely the Claypot Turtle Soup (S$24/S$39/S$50/S$65). Tan Khar Seng was actually the first in Singapore to cook turtle soup in a claypot!

If you’re wincing at the thought of eating turtle meat, Tan Ser Seng doesn’t use endangered or wild turtles at all. The meat comes from a local company in Singapore that imports freshwater softshell turtles from farms in Indonesia. So don’t worry, it’s prepared exclusively for consumption.

The Claypot Turtle Soup is simmered with over 20 herbs and spices. This truly nutritious and thick broth is said to lower blood pressure, improve kidney function and boost virility. 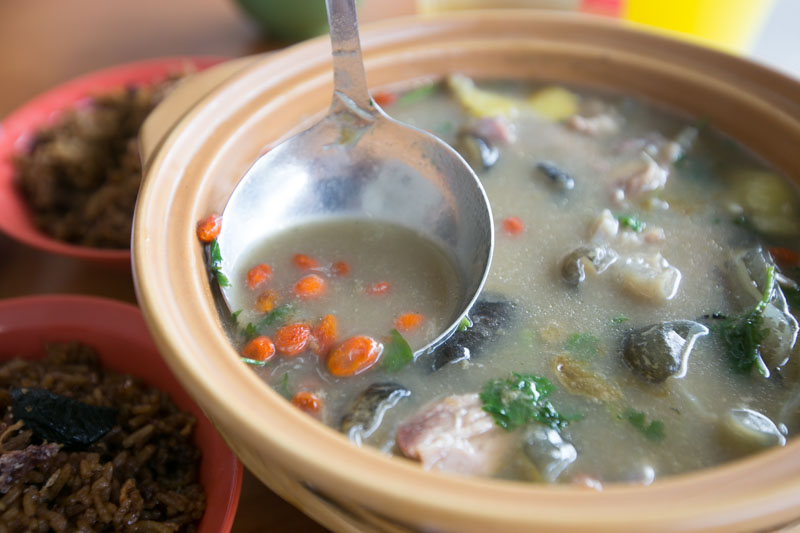 The turtle soup was full-bodied and sweet, but the light and smooth texture reminded me of old cucumber pork ribs soup. It had a faint taste of herbs and rice wine, and the fresh coriander added a tinge of mint and zest.

I loved how there was a slightly oily sheen on the soup’s surface, but it wasn’t so oily that I’d have to scoop it out.

A thin layer of fat solidified on top after a while. It’s the kind that emerges after hours of boiling pork bones and is filled with nutrition and goodness. This was my first time trying turtle meat. I’ve got to admit, I was a little apprehensive and thought it’d taste like fish or chicken meat.

Rather, it resembled pork meat in both texture and taste. Depending on the piece, it could be either springy and firm, or soft and tender. I suppose whether it’s chewy or soft depends on which part of the turtle you’re eating — just like beef or pork.

Tan Ser Seng was really generous with the meat portions. I lost count of how many chunks of turtle meat I scooped into my own bowl! It looks like sea cucumber, with an incredibly similar texture and taste. It’s slightly slimy, jelly-like, and really smooth.

I actually really liked the turtle skin. It didn’t have the strong taste I expected, and it was full of collagen. It was cut into bite-sized pieces, perfect for slurping alongside a hearty bowl of soup. 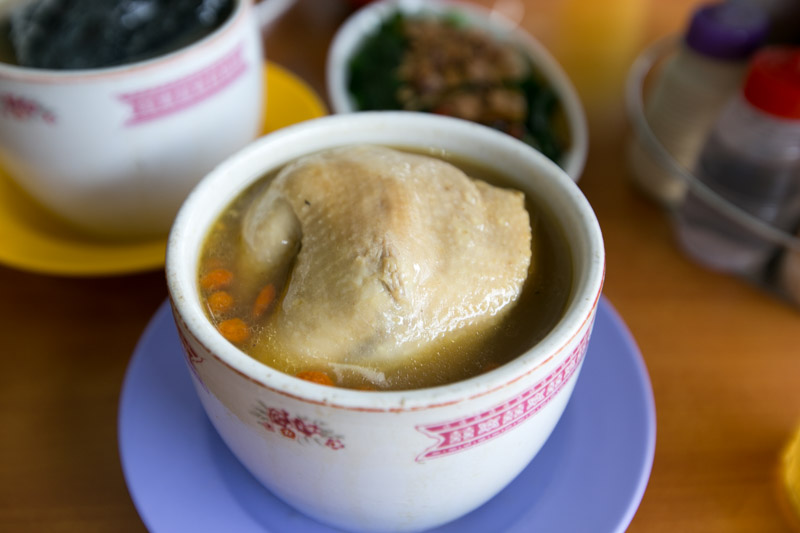 I was told that the Cordyceps White Chicken (S$13) was cooked with plenty of red dates and traditional herbs. But I was still surprised by how rich, thick and deliciously gao it’d be. 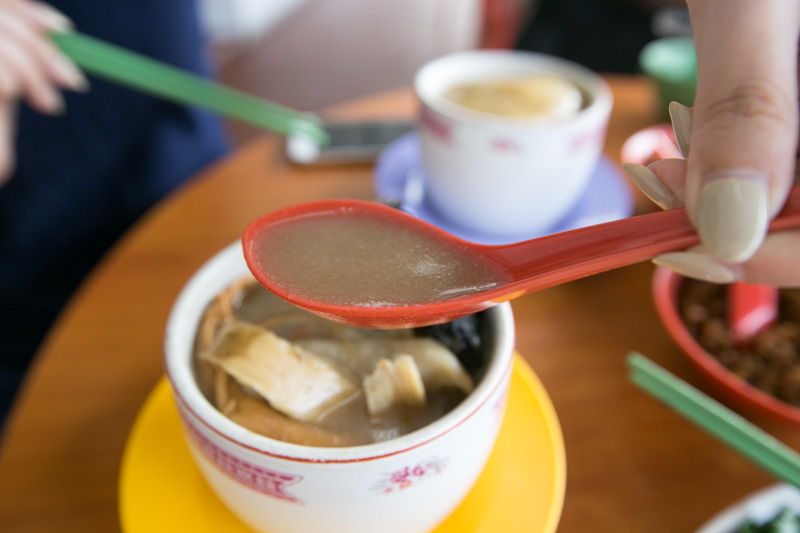 It’s times like this when pictures don’t do the dish justice. The chicken soup was liquid gold.

The sweet soup was so thick that it was almost gravy-like, with an oily surface sheen — definitely from the 12 hours spent simmering it. It’s the kind that’d coat your lips with a sticky film when slurping.

It was so rich that it made me want some water to clear my throat afterwards. Not that it was salty or overly seasoned, mind you.

This was by far the best chicken soup I’ve had in my entire life. It wasn’t even overly herbal, though there was a mild tonic-like tangy aftertaste. I don’t even know how Tan Ser Seng Herbs Restaurant managed to get the chicken meat so soft, but all the meat fell off the bone the minute I prodded at it with my chopsticks.

I was really impressed by Tan Ser Seng’s herbal chicken soup. Not only did it use an entire chicken that was delicious and soft, but the soup also knocked the rest out of the park. 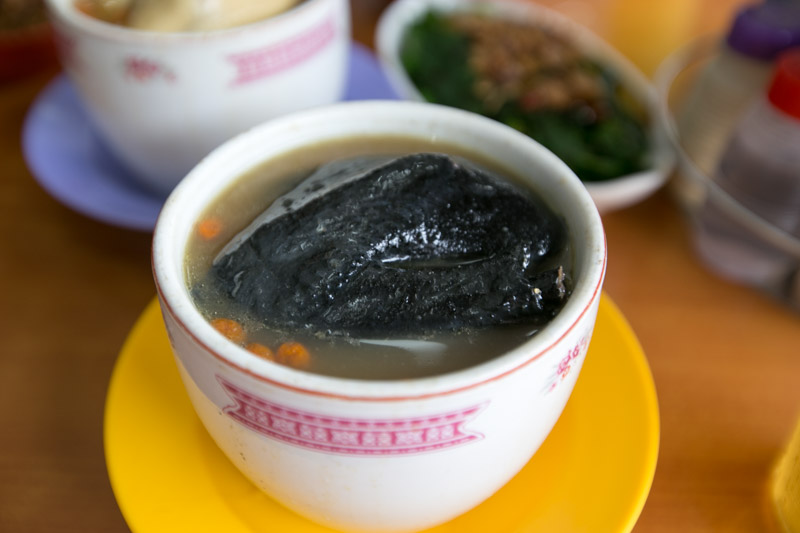 For those with a heavier palate, you definitely have to try the Ginseng Black Chicken (S$13). It’s the kind of strong herbal soup our grandparents would love. While this soup uses the same herbal base as the Cordyceps White Chicken (S$13), this includes a generous entire piece of ginseng.

The characteristic liquorice taste of the ginseng was a little too strong for me, but I suppose that’s because I’m not a huge fan of overly strong ginseng soup. It was still full-bodied, silky smooth and had an earthy sweetness, with the bitterness only as an aftertaste. Pair your soup with a bowl of Yam Rice (S$1.60). It’s homecooked with generous pieces of thick yam and juicy mushrooms, then topped off with crispy shallots.

If yam rice isn’t your thing, go for a bowl of regular fluffy White Rice (S$0.90) instead.

Even though this was my first time trying turtle soup and meat, consider me sold. Tan Ser Seng Herbs Restaurant’s soups are all top-notch. It’s the type of soup best enjoyed during a rainy day, or if you’re unwell and simply want something nourishing.

Getting to the restaurant is also a breeze. If you’re driving, there’s ample parking space opposite the restaurant. If you’re taking public transport, it’s a five-minute walk from Aljunied MRT.

I heard that the restaurant is now operating daily and has expanded its operating hours to include dinner as well!

*This post is brought to you in collaboration with Tan Ser Seng Herbs Restaurant. 10 Places To Spend Your Long National Day Weekend This 2019