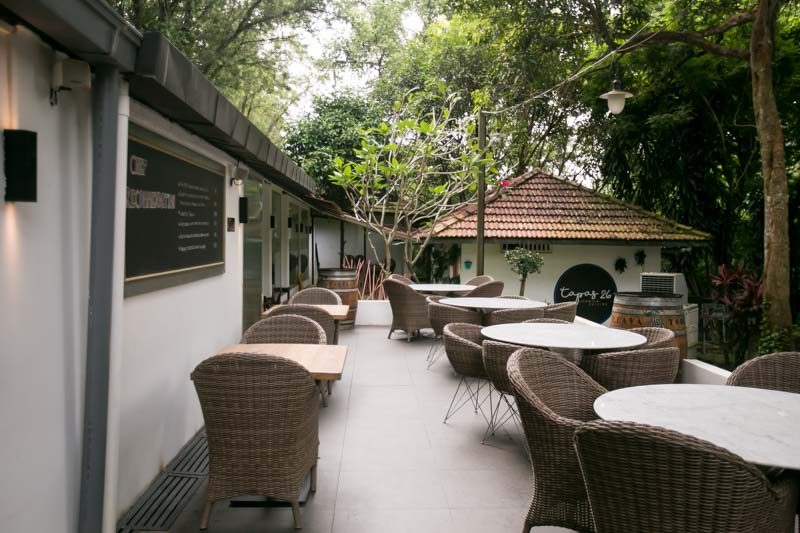 Fancy and hidden usually come to mind when Dempsey Road is offered up as a possible dining location. And the newly revamped Tapas 26 (previously La Ventana) is no different. The interior gave off a classy but welcoming vibe. I went down during lunch in an attempt to avoid the dinner crowd and felt like I booked out the entire restaurant.

I was told that the place transforms to a happening bar with music and occasional dancing by night; I sure plan on making a trip down after work one of these days. 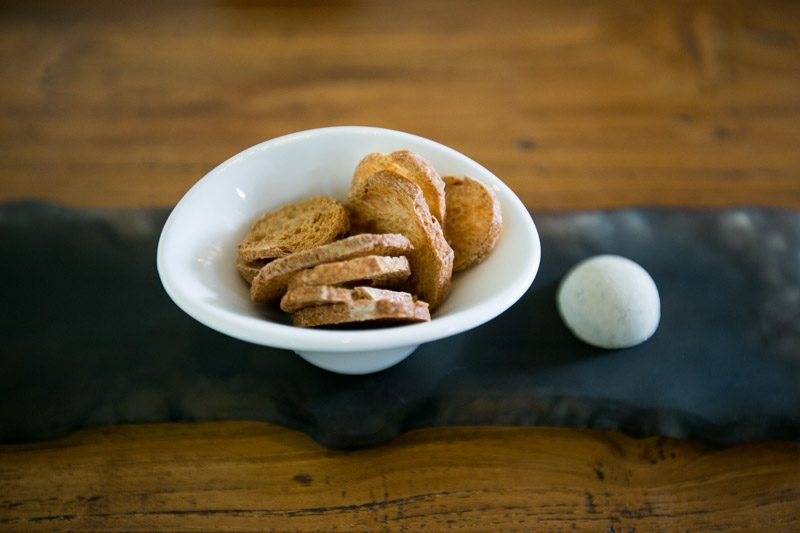 Ambience aside, I had high expectations for the food and service, given the prices I saw on the menu. We were served a bowl of biscotti-like toast with truffle butter and a glass of white wine the moment we sat down (instant plus points).

Looking through the menu, what struck me was Tapas 26’s dishes were unnamed, instead they were ingredients that made up the dishes. I liked how it was unpretentious and everything was described as is. 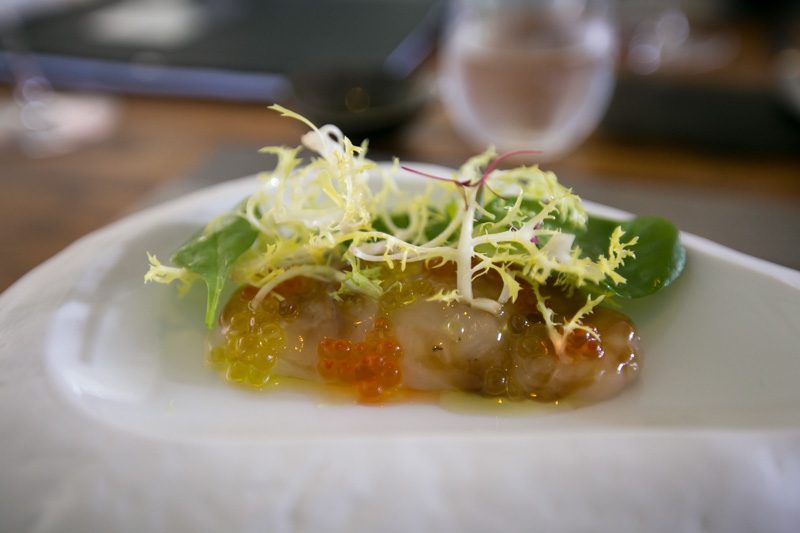 The first dish we had was the Hokkaido Scallop, Sherry Vinaigrette, Salmon Roe, Frisee Salad (S$16). The dish is rather self-explanatory but what I liked most was the balance of flavours.

The tanginess from the vinaigrette and salty bursts of flavour from the salmon roe complemented the sweetness of the Hokkaido scallop while remaining subtle so the scallop shines as the star of the dish. 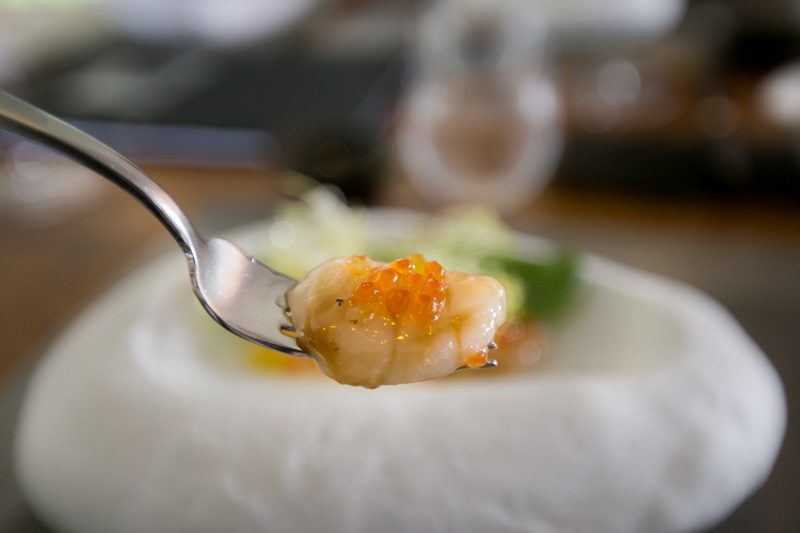 My only gripe was that the scallop appeared to be one big scallop sliced into three thinner pieces.

However, Tapas 26’s skilful preparation and balance of flavours and textures in this first dish hit all the right spots, setting the bar high for the dishes to follow. 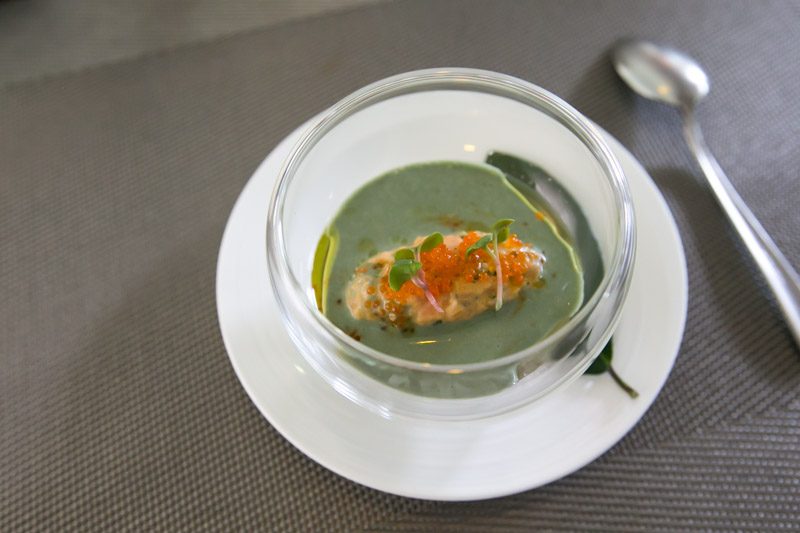 While the scallop was nice, we came here for its namesake and Tapas 26 should, well, have good tapas. 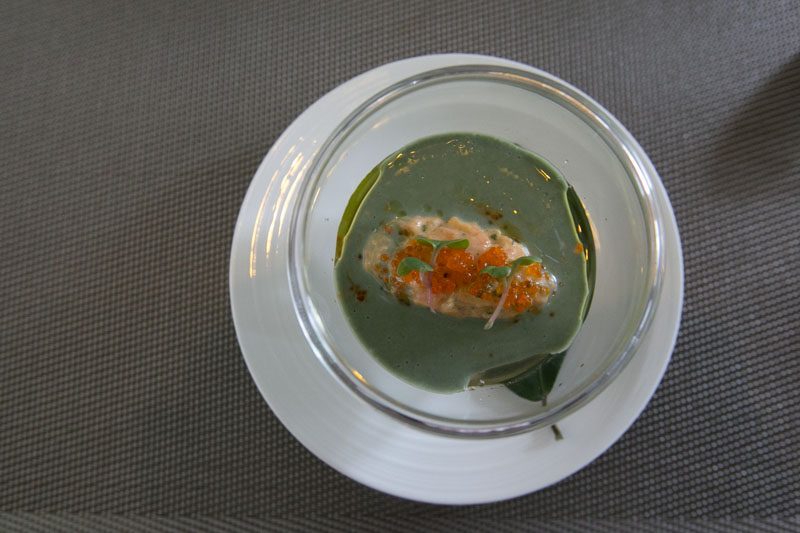 At first glance, the dish looked rather one dimensional but the creative incorporation of flavours wowed me. The ajoblanco (cold almond soup) was poured over a clear tomato jelly. There was a depth of flavour that came from the tart tomato jelly, nutty ajoblanco, salty salmon roe and of course, the salmon tartare itself.

It reflects the innovative style of cooking undertaken by the Korean chef who helms the kitchen in a Spanish tapas bar. 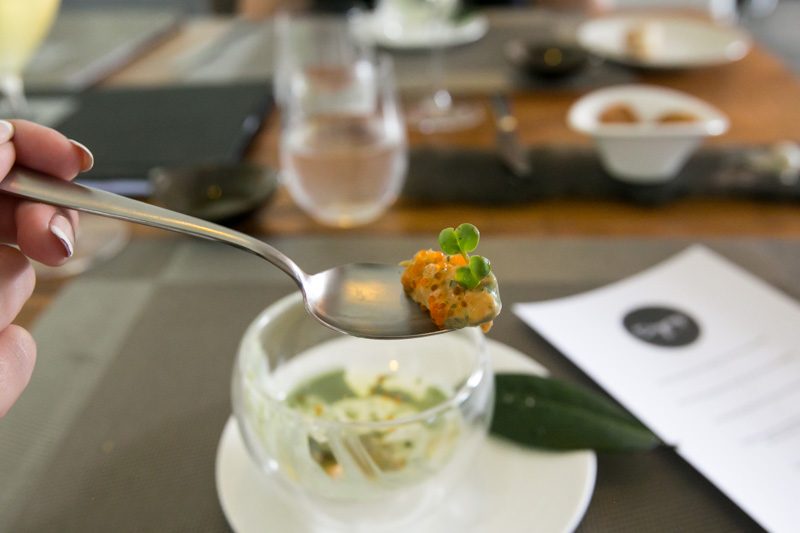 The portion runs a little small, with just over a tablespoon worth of salmon tartare. But for the gastronomical experience, I’d pay S$12 again just to relive the experience. 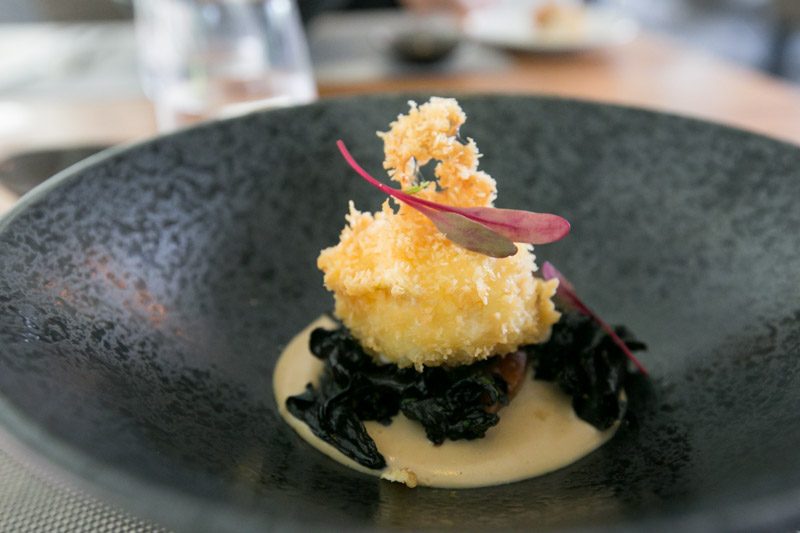 Tapas 26 has a selection of hot tapas available too. We tried the Crispy Poached Egg With Cepes Cream, Chanterelle (S$15) and let’s just say I’ll be back for a second visit real soon. 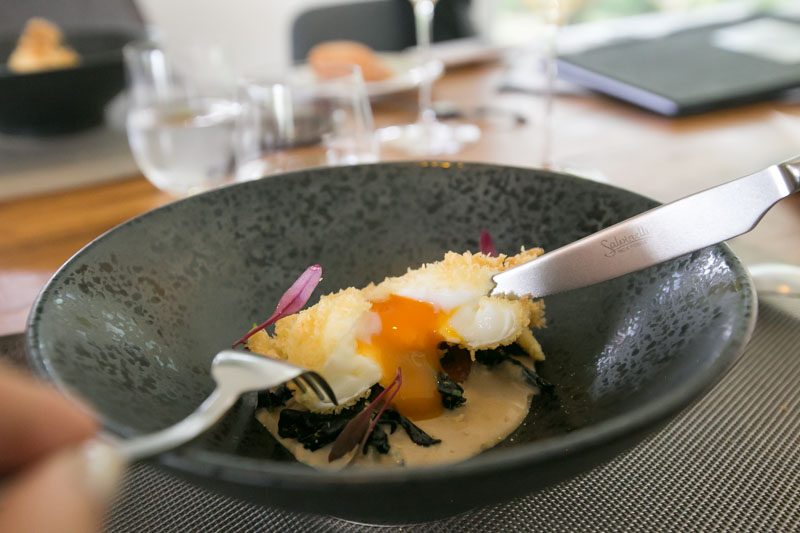 It was the first time I’ve seen an establishment have the audacity to deep fry a poached egg, something difficult to perfect. But they’ve mastered the art and the poached egg had a crisp exterior and runny yolk.

Though the egg was deep fried, it was not dripping in excess oil — yet another plus point! 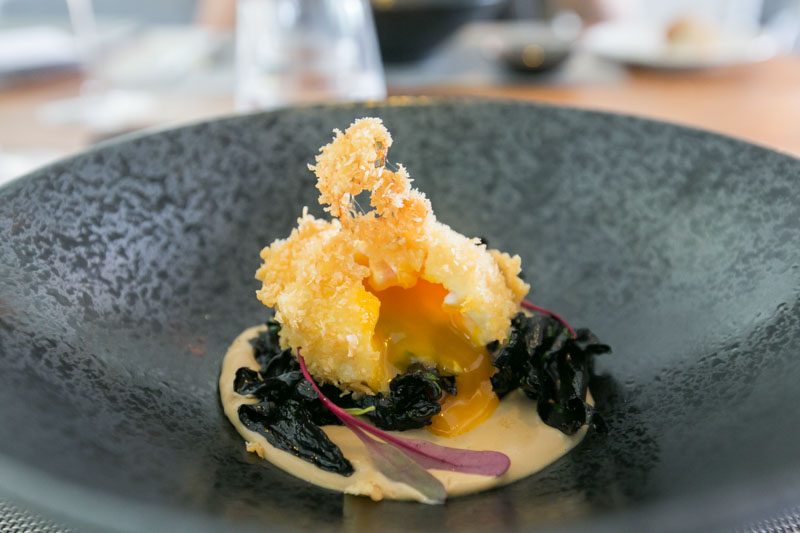 The egg was served atop chanterelle mushrooms that added a slight crunch, and cepes cream that intensifies the earthy flavour of the mushrooms.

Do mushrooms and eggs remind you of a certain classic pairing? Because Tapas 26 has turned my favourite breakfast of  mushroom omelette into a dish that’s a feast for my eyes and tummy. 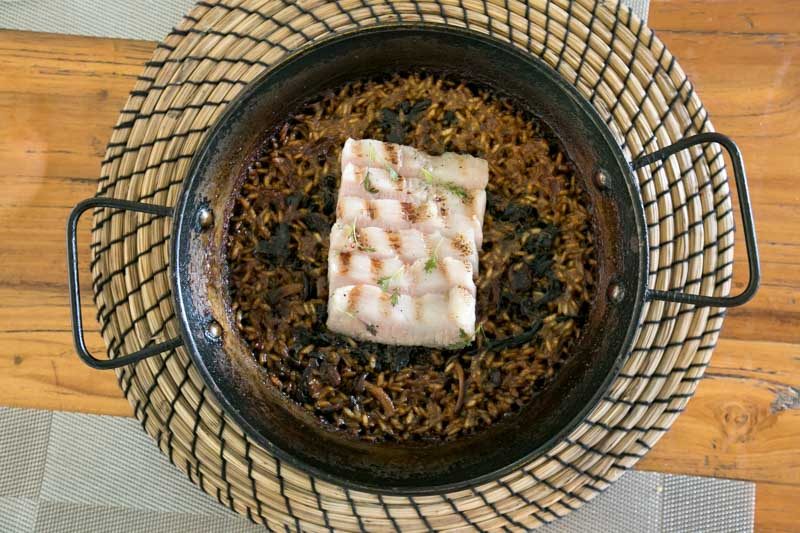 For those who subsist on rice (like the Asians we are), the Iberico Pork Jowl With Mushroom Paella (S$46) is an option to satisfy that need. The pork was fatty and tender, and melted in my mouth, while the paella reminded me of the traditional clay pot rice with a charred flavour to it.

The portion was somewhat measly for S$46, suitable for two people (or one hungry man). But if your wallet feels up to it, give it a try because the pork was delish. No meal is complete without a round of dessert. The Crema Catalana, Caramel Ice Cream (S$12) was a zhng-ed version of the classic creme brulee that sat atop a layer of homemade ice cream. The defining difference between a creme brulee and crema catalana is the distinct burnt caramel taste, which comes in the form of an ice cream in Tapas 26’s rendition of this dessert.

The burnt caramel ice cream was subtle, with bitter notes cutting through the excessive sweetness I dislike in creme brulee. 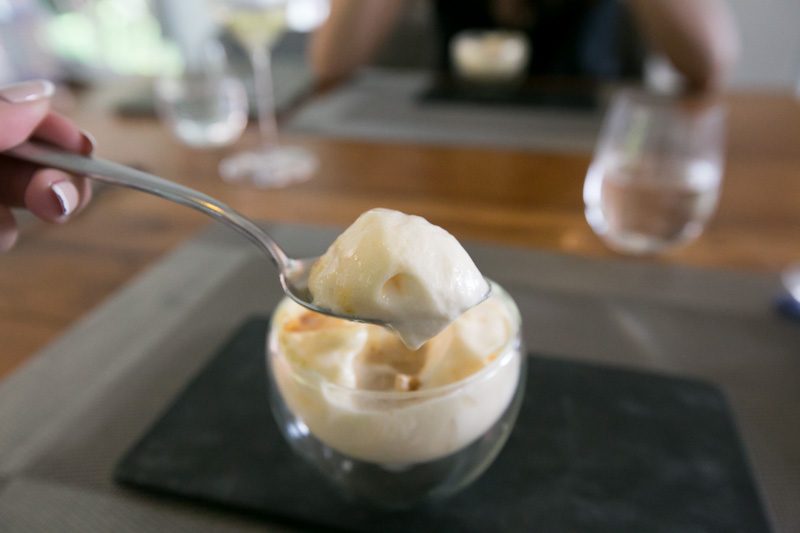 The crema catalana was lighter than the average creme brulee, with the classic custard base being replaced with a cinnamon-lemon-orange-infused siphon foam.

This light foam allowed me to devour the dessert in a matter of minutes without the usual jelak feeling after most desserts.

Tapas 26 has outdone themselves and we left with our tummies satisfied (though, not full). I’d say it’s ideal if you’re looking to impress your date, but I’ll suggest making alternative plans to fill your tummies after.

The portions run on the small side, and won’t satiate your hunger completely (unless you order more, which will probably break your bank). And that’s coming from a girl with a rather small appetite.