With the recent closure of my favourite Ah Seah Teochew Porridge, I was excited to try someplace else for my porridge fix. Teochew Rice & Porridge is located at the heart of the Central Business District (CBD) inside Maxwell Food Centre.  They have been around for the past four decades ever since the old days along the Singapore River— I feel ashamed that I’ve only learnt about them recently! My dining partners and I arrived at Maxwell Food Centre at 11.30am, according to the online opening hours. Lights were dimmed, shutters were opened halfway. We were told by an elderly man who was cutting vegetables outside the stall, “We only open at 1pm.”

Taken aback, we patiently waited for an hour and a half before returning to the stall, where a small queue had already formed even before the shutters were opened fully. I discovered that all the food at Teochew Rice & Porridge is single handedly cooked by Madam Seah, who is 85 years old— she is almost the same age as my grandmother! She is assisted by her son who helps with order taking and serving customers. While waiting for the food to be ready, my eyes were fixated upon Madam Seah, admiring her every move. Although she was hunching, she was still churning out dish after dish of freshly cooked food from her wok— I have insane levels of respect for this legend!

What I tried at Teochew Rice & Porridge We ordered a myriad of dishes to accompany our piping hot bowls of comforting Porridge (S$0.50 per bowl). There was a pretty decent selection to choose from before we finally decided on six dishes. Regulars of Teochew Rice & Porridge rave about Shark’s Meat (S$5). I was initially hesitant about this dish, having thoughts in my head saying “I’ve only had shark’s fin in my life, would the meat be tasty as well?” That changed when I heard my dining partners exclaiming to me, “Wah! You should try this, it’s really good.”— almost in-sync with one another. Upon trying the first piece of the Shark’s Meat, I noticed it fell off the bone so easily. The perfectly seasoned meat was enhanced by the slightly crunchy bits of celery and salted vegetables. Madam Seah’s chilli tau cheo (fermented soy beans) sauce with black beans was extremely flavourful, but mind you, it can get a little salty on its own. Having the plain porridge together with the Shark’s Meat was a match made in heaven— I’m now officially a fan of shark’s meat! The Pork Belly (S$3) was fragrant and wasn’t that oily in my opinion. My only gripe was that it could be braised longer as I felt that the meat was slightly on the tougher side. 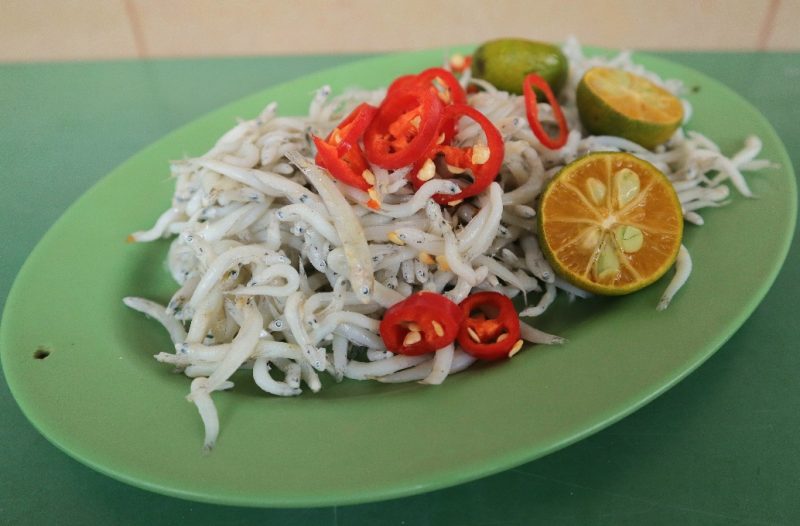 I was asked by Madam Seah’s son if I wanted some calamansi and chilli with my Steamed Silverfish (S$2)— of course I said yes! I’ve always eaten the fried version with porridge, frankly speaking I wasn’t impressed with the Steamed Silverfish as it looked rather pale and unappetizing visually. Well as the saying goes, “do not judge a book by its cover.” The acidity coming from the calamansi juice gave the silverfish a boost in flavour and it tantalized my taste buds— similar to having a lime sorbet in between main courses. The Stir-Fried Minced Pork (S$3) at Teochew Rice & Porridge was a real surprise to me. It had an intense charred taste, in a good way. There were pieces of burnt garlic and crispy black beans, which enhanced the overall fragrance of the minced pork. There were also crispy chunks of minced meat that elevated the whole eating experience. Next on the list was Steamed Fishcake (S$2). The texture of this fishcake was something that a factory-made version will never achieve. It was springy and the bits of chilli and spring onions just tied everything together in harmony. The Cabbage (S$2) was served with tau kee (bean curd skin). This is one of my favourite dishes to order whenever I’m at a teochew porridge place, and Teochew Rice & Porridge managed to nail it. It was beautifully seasoned and cooked to perfection— kudos to you Madam Seah! Heritage hawker stalls like Teochew Rice & Porridge are gradually becoming a thing of the past. Madam Seah, along with many other senior hawkers are working beyond their retirement age. It saddens me to know that her son does not know how to cook— seems like there will be no one taking over the reins when Madam Seah retires.

If you enjoy teochew porridge, drop by Maxwell Food Centre and pay Madam Seah a visit!

Huggs Collective, AIBI Maxwell: Spoil yourself with Huggs’ triple threat of food, drinks, and dessert to get you through the day

Ex Chef who loves to makan. Music, sports and UV rays fuel me! Nicknamed vampire as i don't seem to look like my age at all.