The Better Half: Local Flavours In Artisanal Bakes Like Gula Melaka Avocado And More At Couple-Owned Cafe Along Everton Park

When I think of shops tucked under HDB flats, the thought of zi char stalls and mama stores immediately comes to mind. I would never imagine that a proper bakery coffee shop would occupy such a small space, but that’s where The Better Half comes in. 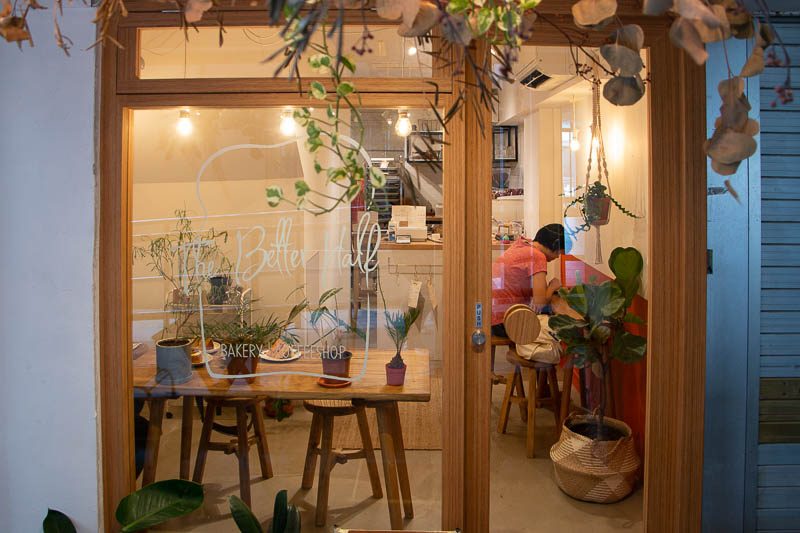 Nestled in a tiny unit under the sprawling Everton Park HDB blocks, The Better Half is probably the smallest cafe you’ll ever have the pleasure of visiting. The bright fairy lights and hanging plants decorating the exterior of the cafe is totally at odds with its grey and white utilitarian surroundings, which makes it look even more inviting. The cafe itself houses a total of six seats, with a rectangular wooden table running along a wall and the other, next to the window. Alfresco dining is also available here, with just two tables lining the front of the cafe.

The Better Half was first an online bakery, run by Jonathan and Hweeying for one and a half years. After saving up, they were finally able to open their own physical store at Everton Park in late 2019. They spend their days and nights baking and decorating, joking that even though the cafe closes at 5.30pm, in reality, the earliest they leave the cafe is 8pm and the latest is 4am. Despite the cafe being so small, Jonathan revealed that he’s actually glad they’ve been able to create a space that is homely and welcoming. He also said that he wouldn’t want to hire anyone else, for the sake of consistency and a sense of familiarity to their customers who are used to seeing Jonathan and Hweeying working their magic on their coffee and cakes. 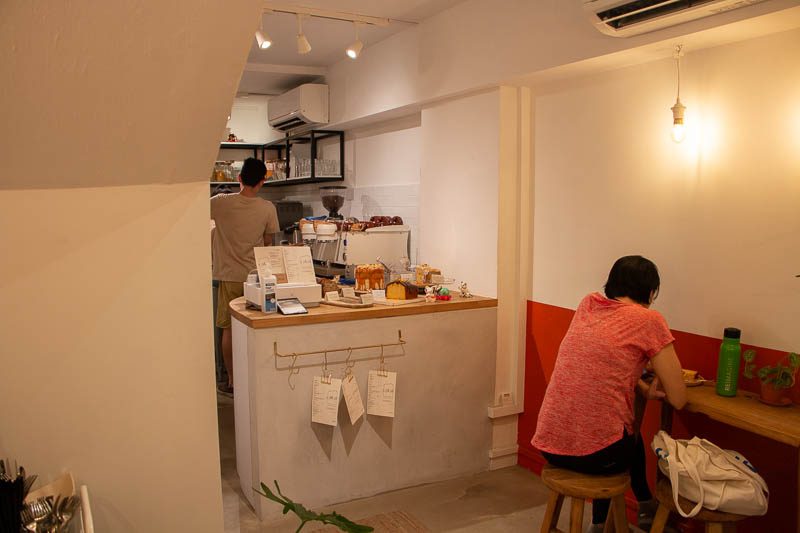 Upon entering the cafe, I instantly felt comfortable, from the warm yellow light illuminating the shop to the smell of sweet bakes and coffee. Small potted plants are scattered around the tables and hanging from the ceiling, while soft music plays in the background. Coupled with the bright smiles on the owners’ faces, The Better Half definitely succeeded in making me feel at home.

I took a seat at the table by the window and proceeded to order a few cakes for myself. The confectionaries were displayed on wooden coasters next to the cashier, with each respective price displayed on a white card. I asked Jonathan what their top five best-selling cakes were and ordered one slice of each. 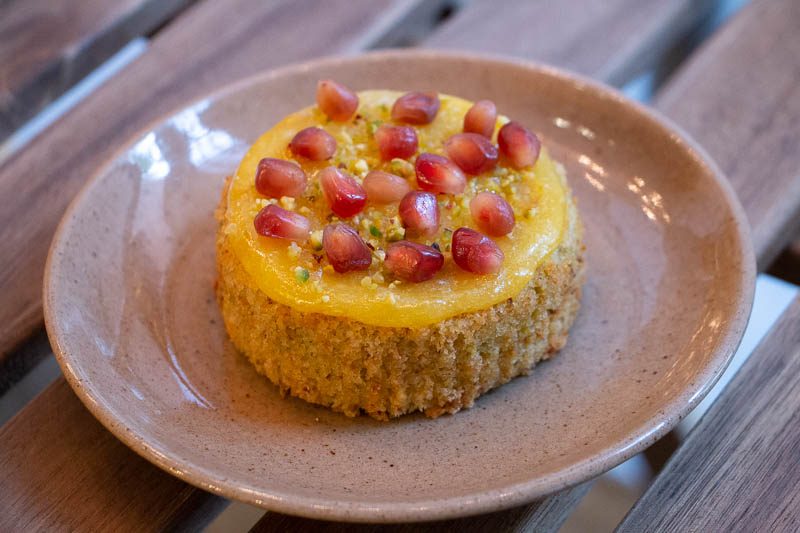 The first cake I tried was Pistachio Lemon (S$8), a tea cake topped with bright yellow lemon curd, pomegranate seeds and sprinkles of pistachio bits. Cutting a chunk of the cake, I saw that the inside of the cake had a slight green tinge and small pieces of pistachio. This was probably my favourite cake out of all of them—the lemon curd added a zesty kick, which was countered by the sweetness and crunch of the pomegranate seeds. The cake itself had a distinct nutty taste from the pistachio, while not being too heavy despite the hint of butter. All the elements in this cake tied in really well together, especially the mixed textures like the spongy cake, the nutty crunch and the soft curd. 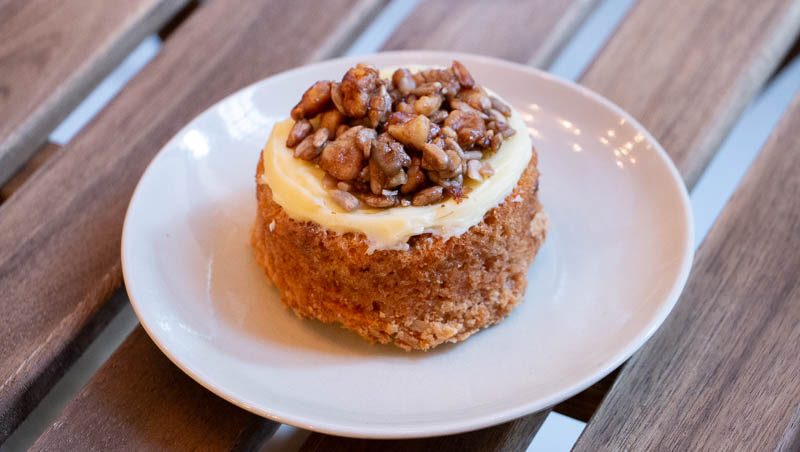 In the realm of tea cakes, I also tried the Carrot Walnut Cake (S$6.50), filled with freshly shredded carrots, cinnamon and raisins, topped with cream cheese, and honey roasted seeds. The cream cheese was thick and paired well with the lightness of the cake, which contained a generous amount of raisins. I found that the cake was a bit dry for my liking, evident from how much it crumbled when I cut a piece of it. Although the honey roasted nuts were crunchy and added good texture, I found that they were quite salty, which overpowered the sweetness of the carrot cake. 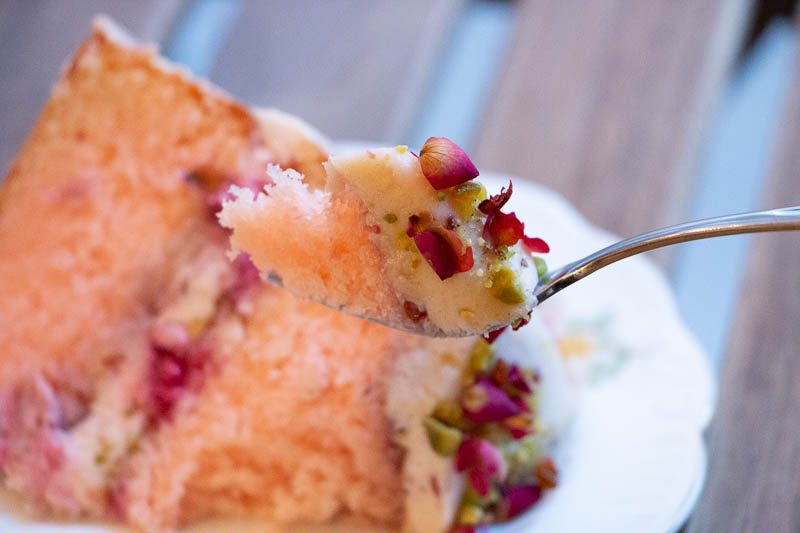 Taking a bite of the cake, I immediately tasted the distinct rose flavour within the moist sponge, which reminded me of bandung. The light raspberry cream cheese dissolved in my mouth, leaving a subtly sweet taste, while the nuttiness of the pistachio and the tanginess of the raspberry pieces helped to cut through the creaminess. Overall, I felt like the cream cheese married the distinct raspberry and rose flavours to create a well-conceived cake that I would definitely order again. 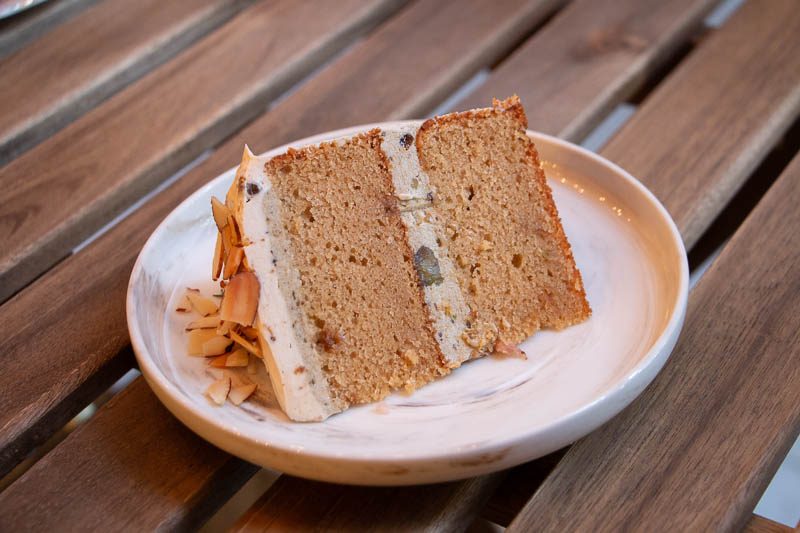 Another cake I really enjoyed was one of their signatures—the Gula Melaka Avocado Cake (S$8). Flavours of molasses and vanilla are combined in order to recreate the Gula Melaka taste within the sponge, with gula melaka buttercream and avocado in the middle. Like all of their layered cakes, this cake is naked, with a sparse coat of gula melaka buttercream on its exterior which hints at the green avocado chunks in the centre, and a sprinkling of toasted crushed almonds on the top. 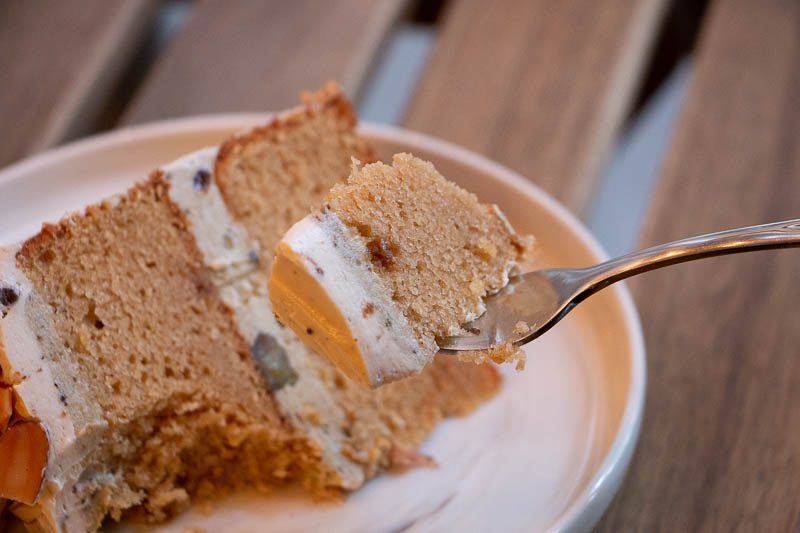 Even though both the sponge and the cream was made with gula melaka, it wasn’t jelak at all. The sponge had more of a subtle taste, while the buttercream was richer and brought out more of the classic charred flavour of the gula melaka. In the middle layer, both flavours of gula melaka and avocado were present; avocado as more of an aftertaste that helped to tone down some of the sweetness. 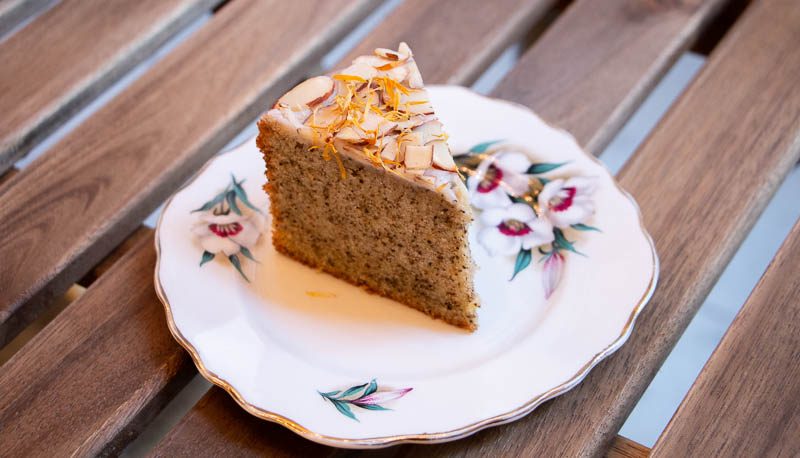 Aside from their layered cakes, I also tried a slice of Earl Grey Lemon (S$5.50)—a sponge cake infused with lemon and bergamot, topped with a lemon icing, toasted almonds and orange zest. 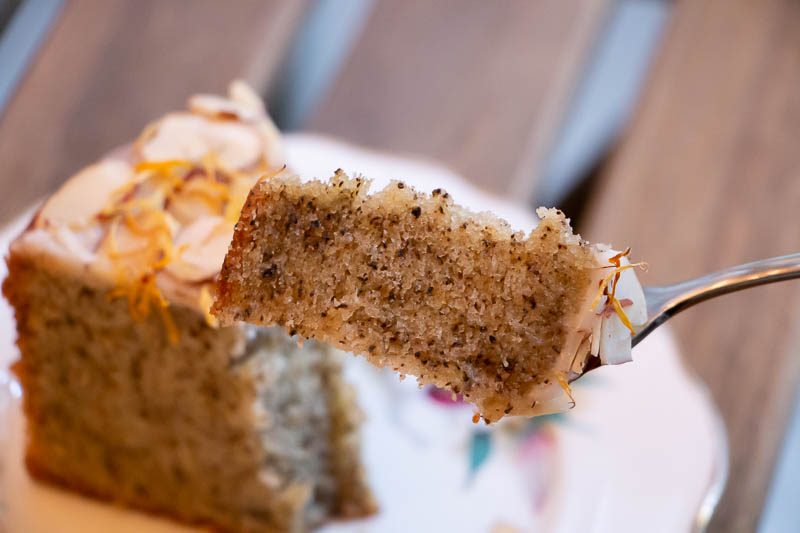 Despite this cake being more on the dry side, the aromatic and unique earl grey taste assailed my taste buds when I bit into the sponge. Contrasted with the zestiness and crunch of the lemon icing, this cake left a sour-sweet taste of lemon on my tongue, with a tinge of earl grey and almond.

All in all, I was thoroughly satisfied by the experience I had at The Better Half, from their delicious handmade pastries to the friendly service I received from Jonathan and Hweeying, who welcomed me into the cafe as if it was their own home. This was my first, but definitely not my last visit to The Better Half! They advised me to come on the weekend instead, where they usually have up to 12 different types of pastries available, including favourites like Lavender Honey, Coconut Passionfruit and Rose Lemon.

If you want to bring some of their artisanal bakes home for yourself, you can order their cakes online, and even request for cake customisation services and more on their website. They also serve speciality beans in-store and online, for the perfect pairing of coffee and cake.