The Carving Board Grill: An Affordable Atas Western Restaurant At A HDB Block In Jurong East 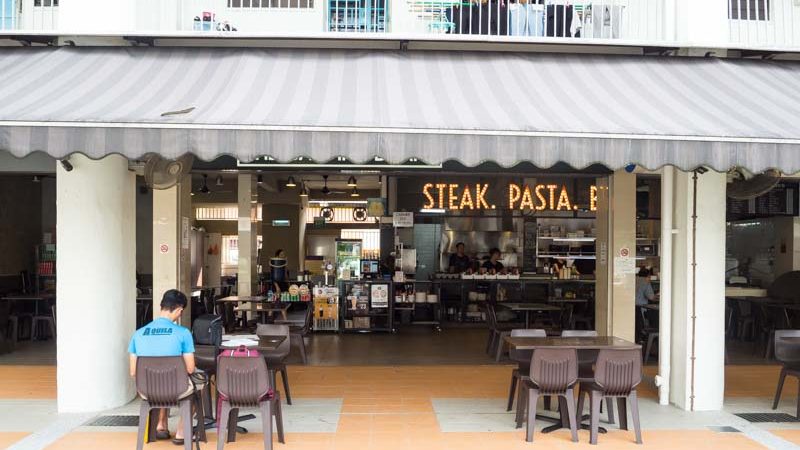 Thinking of getting a fancy dinner but dread the hefty price tag that comes along with it? Look no further. Your answer is The Carving Board Grill, a dinner-only Western restaurant situated in the heart of Jurong East‘s HDB estates.

Opened in 2015 by steakholders Gary and Lynette, The Carving Board Grill serves affordable upmarket Western classics right at the doorstep of Jurong East residents. 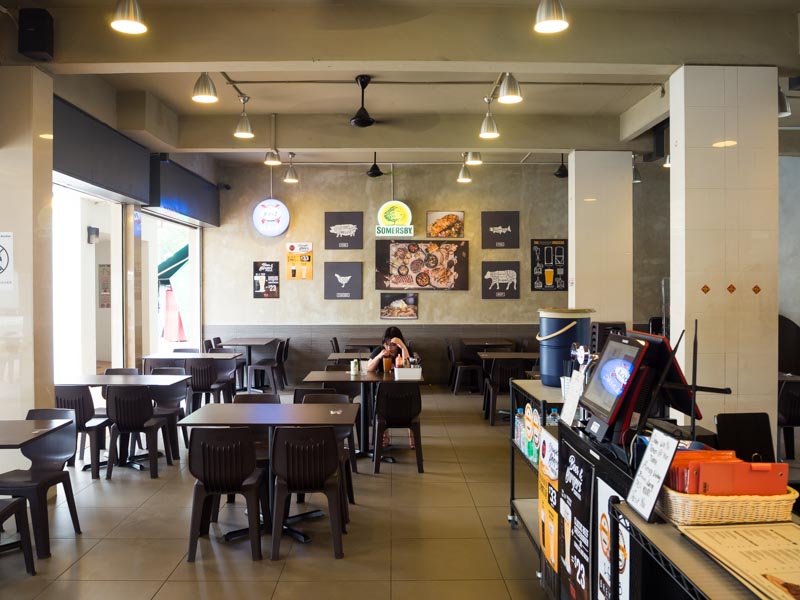 Situated below an HDB block, a passer-by may easily overlook the restaurant as a simple kopitiam food outlet. However, the eatery stands out with its subtle grey wall and posters, which gives it an edgier look.

The Carving Board Grill is also marked with a bright Hollywood-esque sign ‘Steak. Pasta. Beer’ that is impossible to miss. 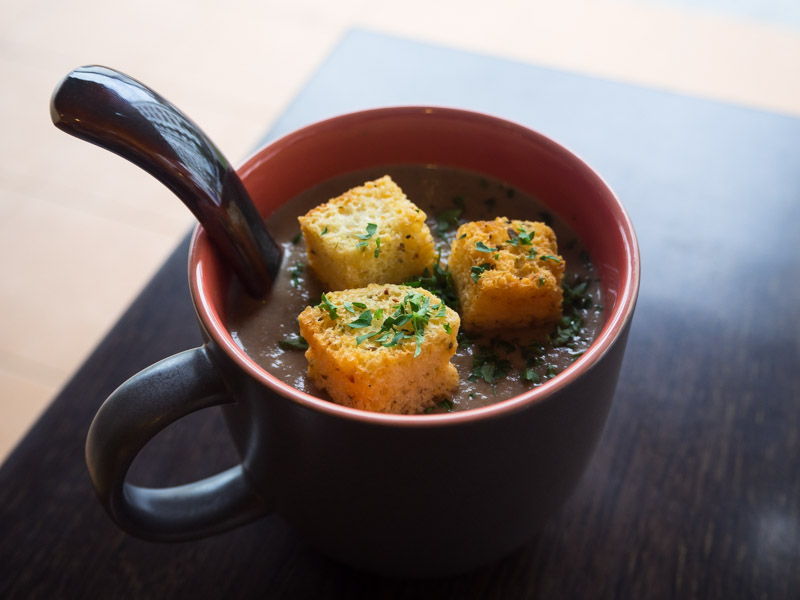 Our meal began with an appetising homemade Mushroom Soup ($6). What better way to combat the evening chill than with a comforting mug of warm mushroom soup made from scratch? Definitely refreshing, considering that I wasn’t served canned equivalents, which I find at some Western eateries.

Digging in, the soup was creamy and smooth with some notes of earthiness in flavour. It was enjoyable as the soup was not watery and the essence of the mushrooms was intense enough. I liked the crouton trio that was able to soak up the hot soup while retaining some crispness in each bite. 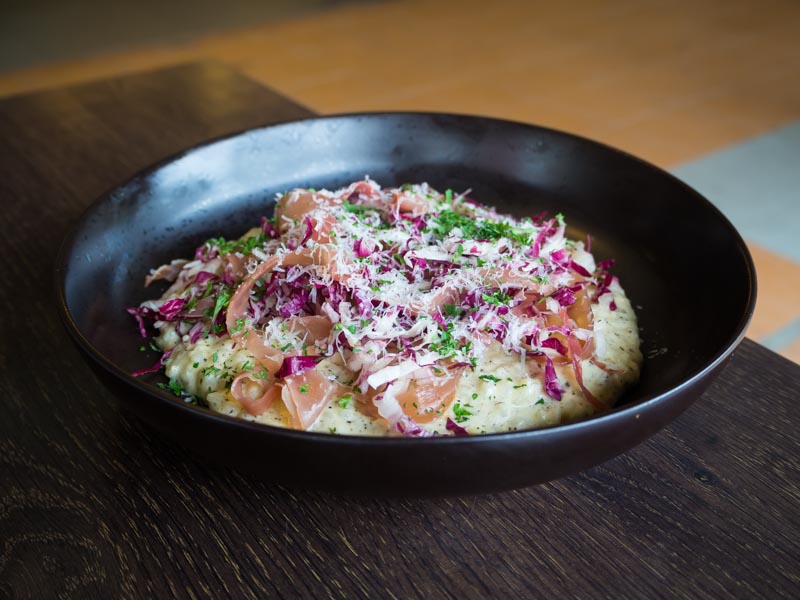 We had the Truffle Risotto With Prosciutto di Parma ($17). The plate was truly a sight to behold with the bright purple hues from the radicchio. I was very impressed that the risotto was creamy, thick and milky. The rice was a perfect al dente — soft and slightly sloppy while retaining some chewiness in every bite.

Mamma mia! The pairing with the prosciutto was oh-so-delightful as it was thinly sliced and added just a tinge of saltiness to the dish. Be warned that the truffle is strong in this one. While I really did love the smoky flavour and umami that the truffle added, my companion was not too much a fan of the combination. 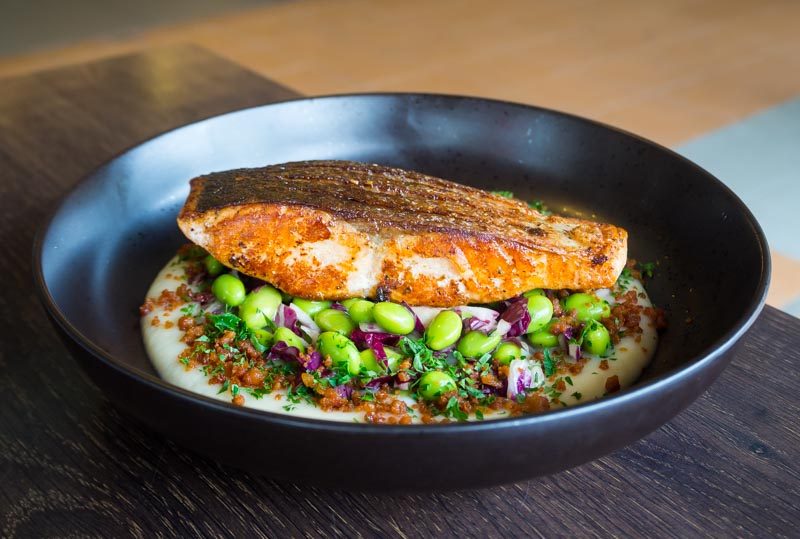 On to my favourite dish of the evening, which was the Norwegian Salmon Steak ($18). Just feast your eyes on this beauty! Everything on the plate really came together, from the pinkish salmon meat to even the novel use of edamame. The combination of the different textures and flavours really made this dish a standout.

The contrasting textures of the softness of the cauliflower puree with the crunchy bacon bits really added depth to the dish. While I really loved the crunch of the bacon bits, I must admit that they were a tad too salty. 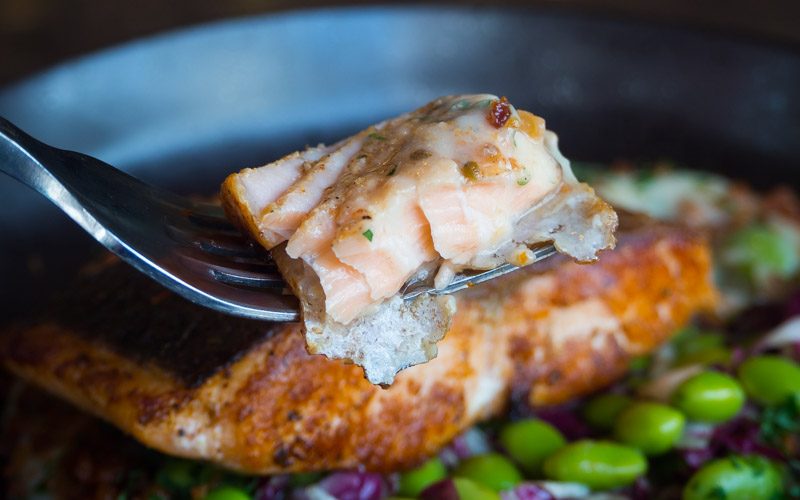 The pan-fried salmon was cooked perfectly to a brilliant pink. It was glorious seeing the layers of salmon just pull apart. Flavour-wise, the taste of the juicy salmon meat was really elevated by both the paprika spice and the citrus from the lemon vinaigrette.

Perhaps, the only critique would be that the crispy skin was a bit burnt at some areas which stopped the dish short of perfection. Next up was the classic Chili Mussel Marinara ($13). The pasta itself was soft but still firm enough while the spicy tomato sauce was doled out generously. The tanginess of the tomato sauce was not too overpowering, and the sour hints of Tabasco really perked up the dish.

The choice of the blue mussels was definitely apt for the dish. While the meat in each mussel was rather small, I personally enjoyed the better ratio of tomato sauce to meat in each bite. The mussels were also fresh which was very pleasant. 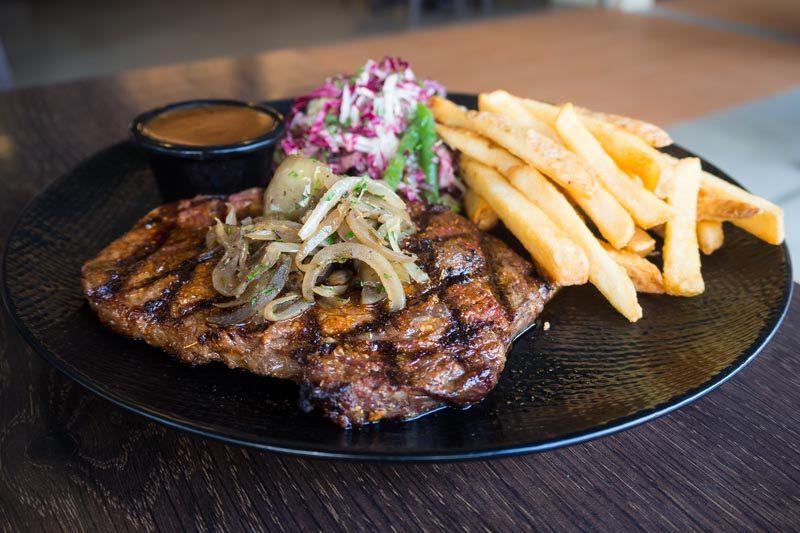 Behold, Jurong East residents! You can finally get a decent steak in your neighbourhood. Of course, we had to try the fan-favourite Australian 100 days Grain-Fed Ribeye Steak ($26).

With a premium cut served together with a crisp radicchio salad, caramelised onions and fries, the entire plate is definitely value-for-money. It was very delightful picking up on the slight woodsy smell of herbs on the steak. Upon cutting in, the steak was done to a nice medium-well, just how I like it, although the cook of the meat could have been more even throughout. The meat, however, was juicy, succulent and well-seasoned; very enjoyable indeed.

In particular, I was a fan of the caramelised onions, which added a refreshing sweetness that really complemented the heavier flavours on the meat. The fries were also nice, crisp on the outside while pillowy soft on the inside.

The most impressive part of this dish, however, is the restaurant’s choice to serve up a more expensive cut of meat despite the humble restaurant setting. What I find is that there really is a considerable difference when a better quality meat is used. All that’s needed is an experienced chef like Gary to do it justice. 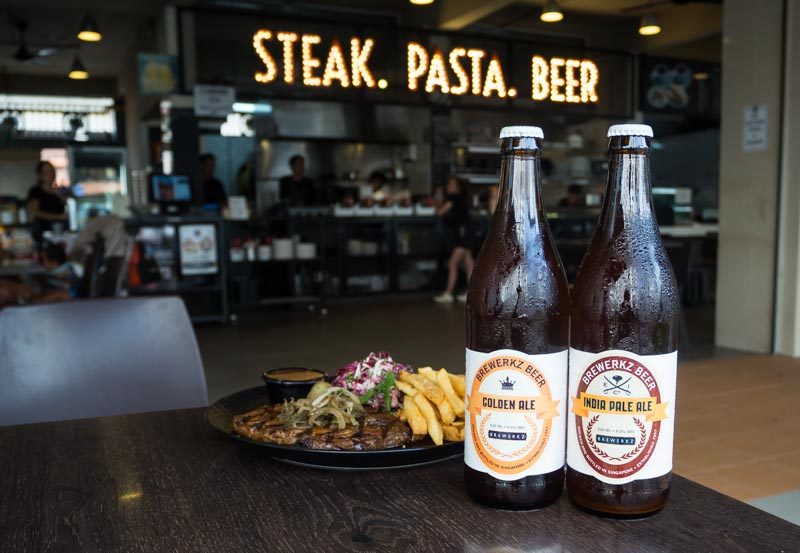 Do look out for the fantastic beer promotions at The Carving Board Grill. With offers such as its Beer & Burgers ($23 for Classic Cheeseburger or Bangers & Mash with a pint of Asahi Black or Kronenbourg 1664), just drink and be merry. If you’re in the mood for something different, you can even get premium handcrafted beer, Brewerkz Beer ($23 for two bottles).

The Carving Board is definitely more than meets the eye. The level of culinary finesse displayed is equivalent to a higher-end Western restaurant despite its heartland location and simpler restaurant interior. Its deliberate choice of a hawker disposition even contributes to the restaurant’s more casual and welcoming atmosphere.

The best part is that the prices are all void of GST and service charge! With its humble restaurant setting, The Carving Board Grill can serve up pretty atas Western food using higher quality ingredients while keeping prices more affordable for the local folk. And hey, Jurong East residents will barely have to leave home for a good meal.