The Chinese Kitchen: Good Ol’ Chinese Classics Inspired By Recipes From The 1950s At Cavan Road Unbeknownst to many, a new Chinese establishment has landed in the Lavender area, at Cavan Road. Literally named The Chinese Kitchen, it is helmed by Chef Austen, former President of Society of Chinese Cuisine Chef (Singapore).

He also holds several culinary accolades to his name, and has now embarked on serving hungry diners some of his best Chinese recipes, inspired by the 50s and 60s. 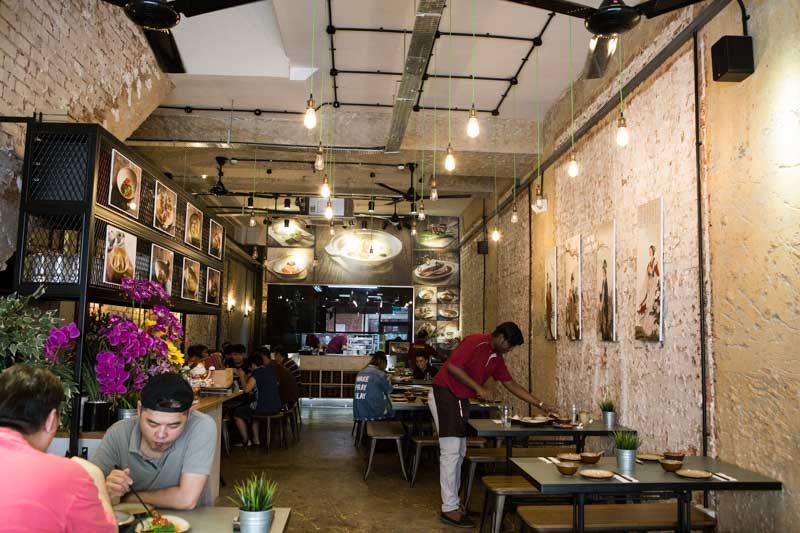 The first thing I noticed upon entering was that the interior is unlike any other Chinese restaurant I’ve stepped into, exuding a more modern vibe that’s more suited for a cafe or coffee house. That being said, I liked the exit from the usual prim and properly clothed table and suited wait staff, for this less formal setup. 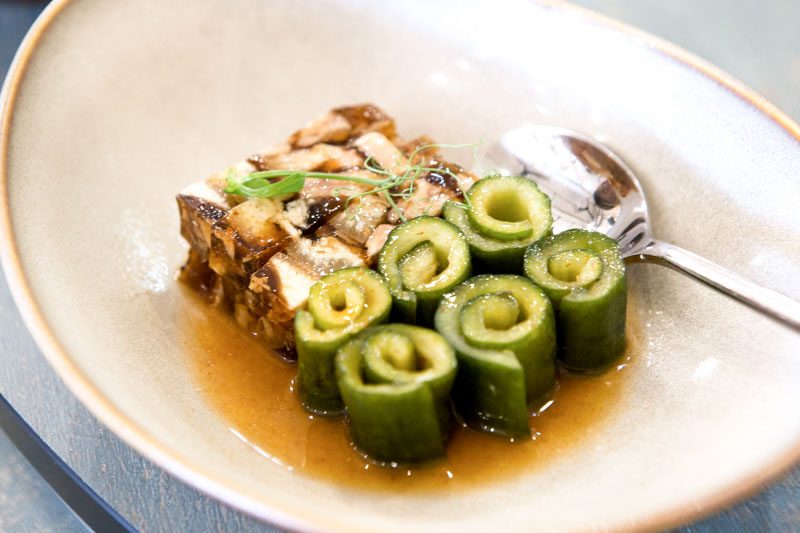 For starters, I was presented the Pork Trotter Jelly With Passionfruit-infused Cucumber ($8) which, at first glance at its name, piqued my interest immediately. Firstly, all the vegetables used are organic and secondly, pork trotter jelly is a traditional Teochew dish that’s hard to come by.

Much effort and time are gone into making sure the consistency is right, while keeping the flavours complementary enough to go well with sweet-sour cucumber. To be honest, the highlight of this particular dish was the cucumber itself. 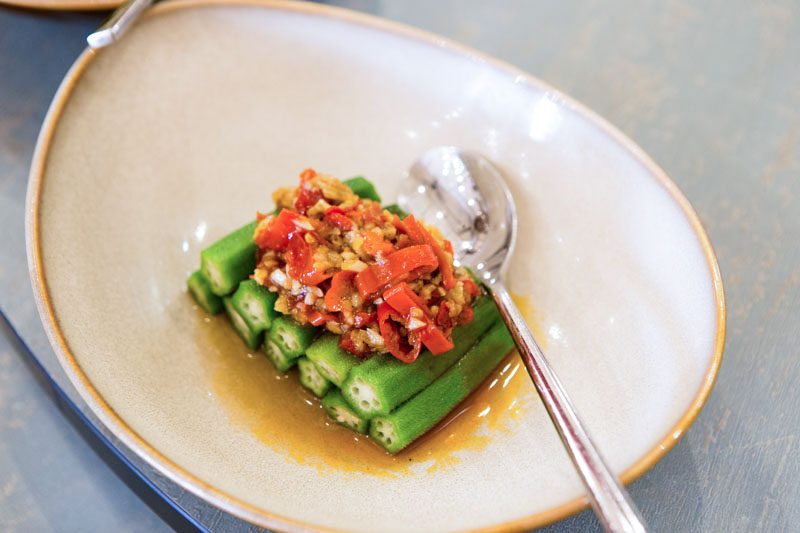 For someone not a fan of okra, this next dish actually won me over (a little). The Organic Okra With Pickled Chilli ($6) was crunchy and noticeably less fibrous than the non-organic okra that I’ve had to contend with. I guess from now on, organic okras are the only kind I will eat. 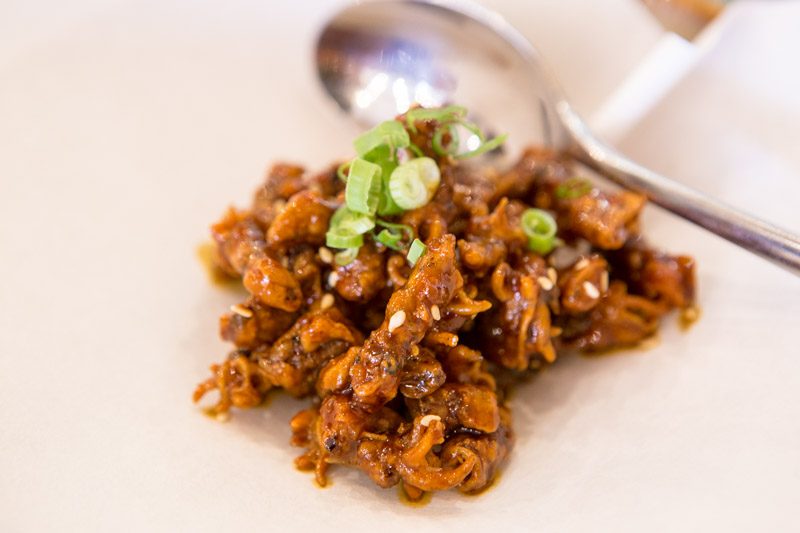 I’m all in for food with texture, and the Crispy Baby Squid & Pomelo Salad With Wasabi Sesame Sauce ($9) was an instant hit with me. The squid was coated with mala sauce, balsamic and garlic, which may or may not have been the reason why the wasabi element in the dish wasn’t very potent. 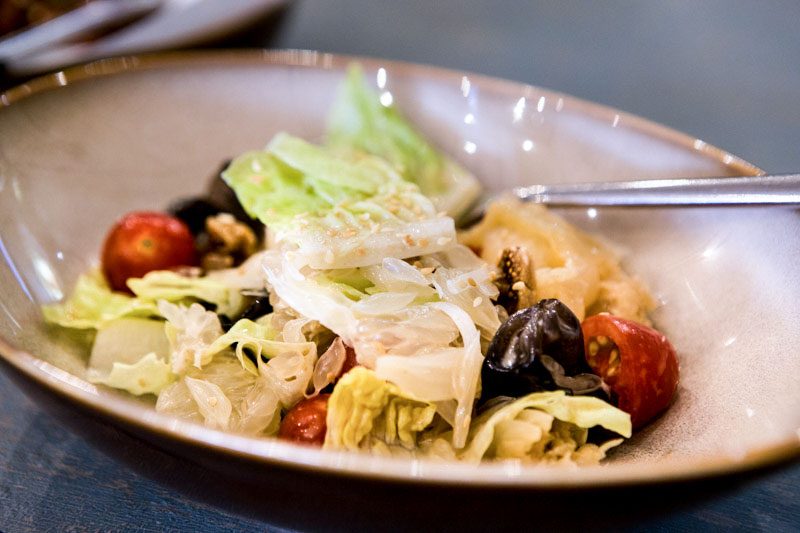 Have you ever heard of Pomelo Jellyfish Salad ($10)? Neither have I, but boy was it succulent! I didn’t know the combination of an acidic ingredient would ever go well with something as neutral tasting as jellyfish. In fact, it brought out the natural sweetness of the sea creature, something I’ve not had the opportunity of experiencing before. 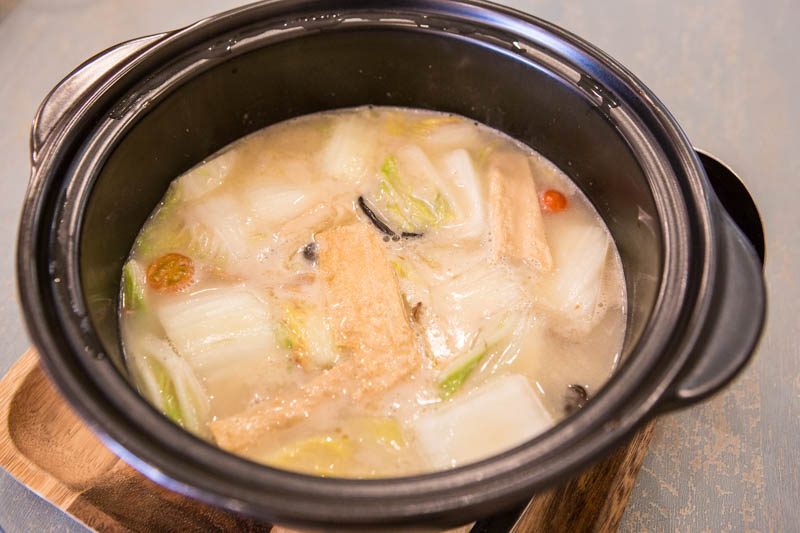 The next dish was my personal favourite of the afternoon. The Signature Old Fifty Collagen Broth (Ocean Catch) ($38 for standard size, $55 for upsize). I can imagine enjoying this on a rainy day, with a tummy that’s growling for something soulful. The broth is rich and silky, made with chicken, duck, pork and fish skin, reminiscent of the 50s when times were hard and soups were made from whatever is leftover. It was cooked over a slow fire for at least 10 hours, so the robust aroma and flavour is something you will be craving for even when you’ve slurped the last drop. 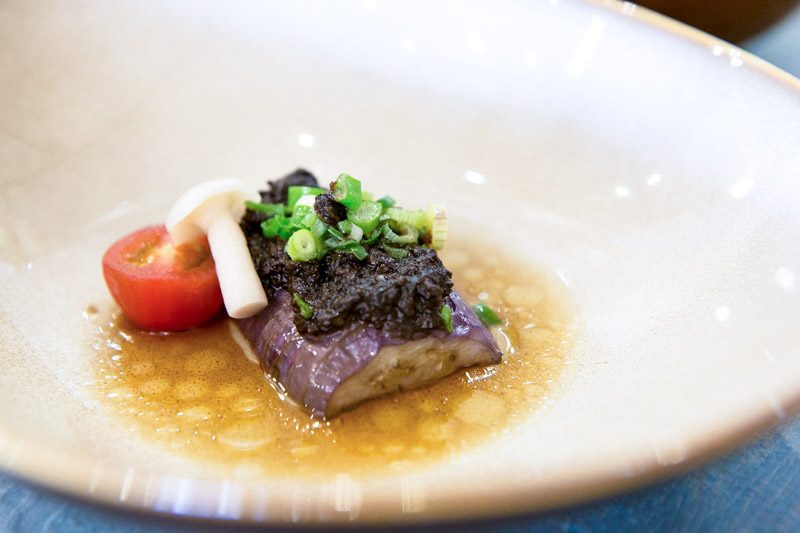 One of three off-menu items I had was the Steamed Organic Eggplant With Black Garlic Sauce ($14 per serving), and the most striking aspect of the dish was how smokey the garlic was, and it was amazing! There was a sense of grit that made the dish truly earthy and nutty and an absolute delight, especially given that visually didn’t look as tantalising. 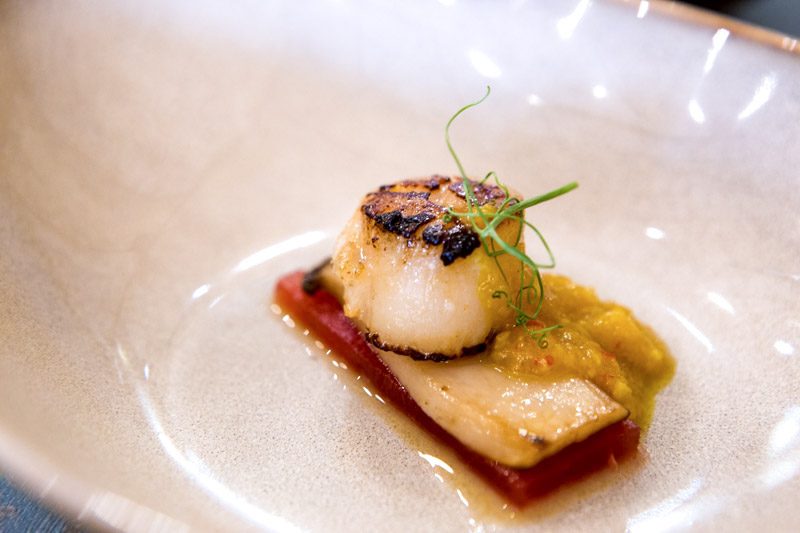 Another off-menu item was the Pan-Seared Scallop With Pineapple Sauce ($18 per serving), which I didn’t find outstanding per se. I would have liked to be able to taste the acidity from the pineapple a lot more, as the fattiness of the scallops are an ideal complement to this particular element. 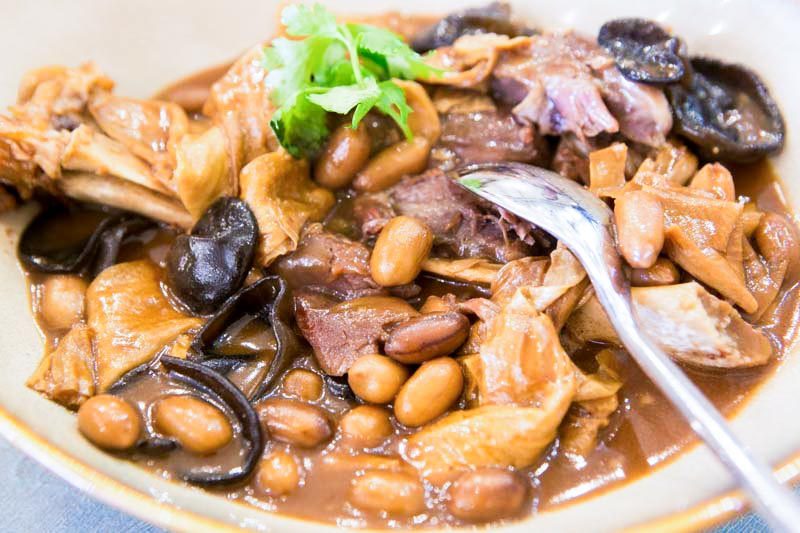 The third off-menu item I had the chance to try was the Lamb Shank ($22), which is something I was kind of thrown off by, considering I’ve never seen a lamb shank on a Chinese menu. However, this one was starkly different, as the sauce was made with black fungus, peanuts and beancurd skin. 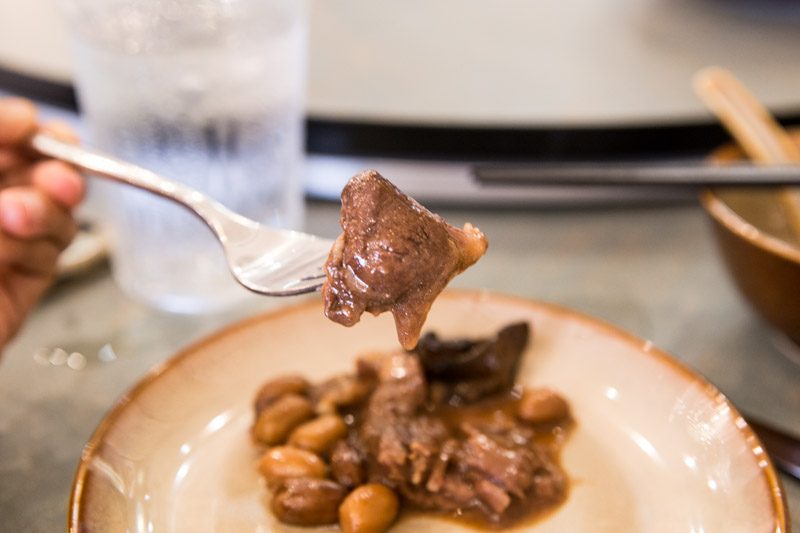 The flesh was tender and the sauce was impeccably savoury and fragrant. It was the dish that definitely contributed to my already-satiated belly, but with such exceptional flavours, it was hard to say ‘no more’. The last main was the Braised La La “Ying Yang” Noodles ($14), which didn’t excite me at first. But my mind was immediately changed when I tasted how luscious the noodles were, and how fresh the la la were. The “Ying Yang” part comes from the fact that both Korean glass noodles and vermicelli were used, providing a nice contrasting bite. 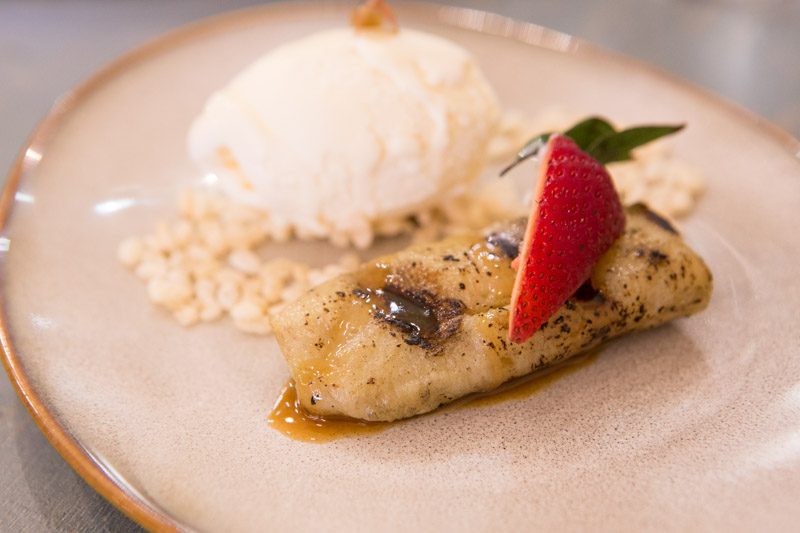 For dessert, I was overjoyed to see Charcoal Grilled Banana With Sea Salt Caramel Ice Cream ($4.50). I haven’t enjoyed grilled bananas in ages, and this one was an elevated version as the char and smokey edge contrasted so well with the caramelisation of the banana. The ice cream was simply cherry on top.

With a very varied menu to suit all tastes, The Chinese Kitchen isn’t any ordinary Chinese restaurant. You’re bound to find something that will whet your appetite, be it for a small bite or a hearty meal. Chef Austen has surely found his footing here, and I foresee this otherwise quiet street seeing hungrier crowds.

Previous articleKakak Kentang: Get Your Fill Of Giant Potato Balls At The New FOMO Food Court At Sultan Gate
Next articleEat Your Way To Snack Heaven At The World Snack Fair 2018 From 19 – 21 Jan At Suntec