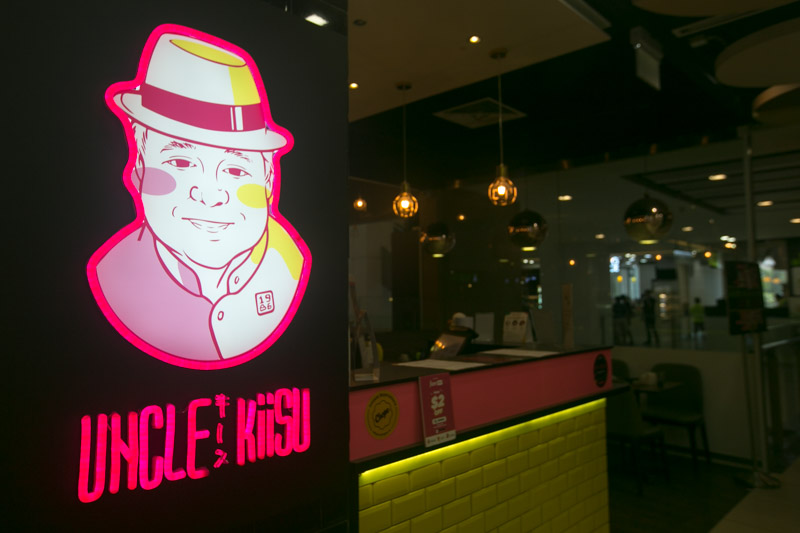 Pairing Japanese and Peranakan flavours together might seem odd to most of us, but Uncle Kiisu in Novena does it really well. The menu features uniquely delicious dishes like buah keluak tossed with ramen noodles and kueh pie tee stuffed with unagi coleslaw and topped with tobiko.

I almost missed Uncle Kiisu’s inconspicuous entrance because of how it was nestled along a tiny and cramped corridor on Square 2‘s second floor. Luckily, its bright pink neon sign drew me in like a moth to a flame. 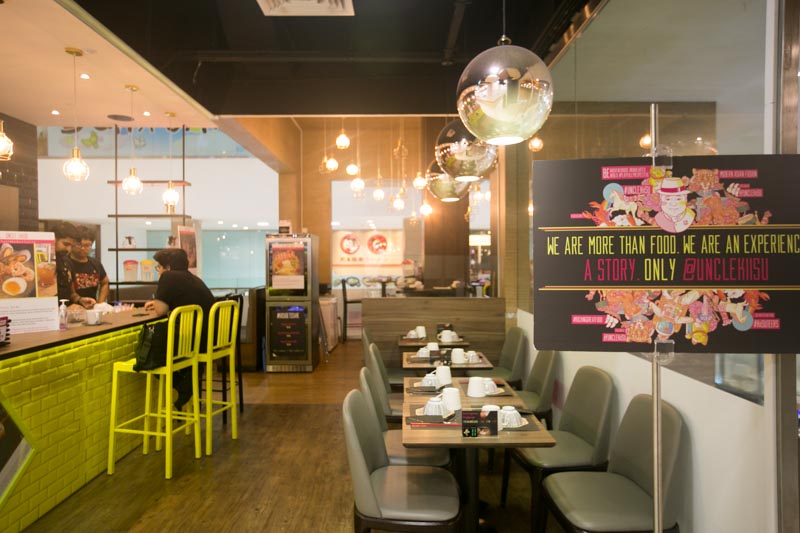 I saw immediately that Uncle Kiisu wasn’t like your regular café or bistro.

Its decor was eccentric, bright and unique, with its bar and high chairs painted to look like bright yellow bricks and rustic hanging light bulbs lining tight and small spaces.

If not for the fact that the restaurant overlooked the central atrium of the mall, I’d have thought I was in a more indie and secluded hipster area, like Tiong Bahru, Haji Lane or Upper Thomson, and not Novena. The seating is split into several sections due to its unique floor plan.

The biggest seating area is accessible through a tight corridor, and is hidden behind a statement wall with quirky prints like unicorns, astronauts holding sushi, octopus and large tigers. 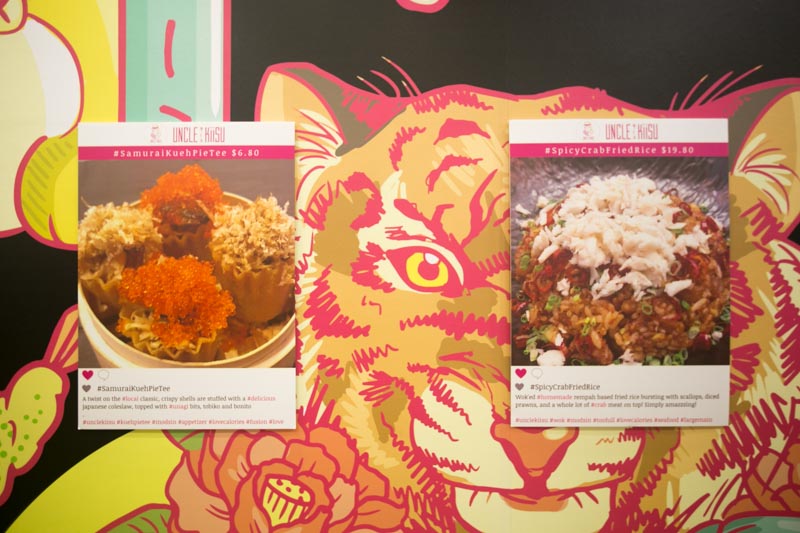 You can even find the star dishes being hung on walls like paintings but in the form of life-sized Instagram posts, complete with hashtags, captions and heart-shaped ‘like’ buttons. 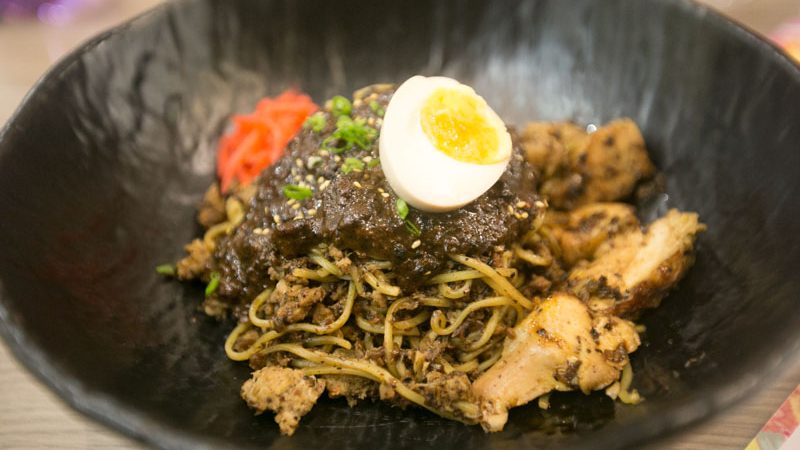 The first dish that automatically caught my eye was the #KuroGorudoRamen (S$16.80).

For those unfamiliar with buah keluak, it’s the seed of the kepayang tree and is poisonous if not prepared properly. It’s found mainly in Peranakan restaurants and traditional Nyonya cuisine, and the preparation includes days of soaking, boiling and fermentation before the black oily meat is mixed with spices and cooked. Buah keluak is typically a little bitter, like dark chocolate, with a rich, earthy and strong aftertaste that most people associate with smoky mushrooms, truffle or fermented black beans.

Uncle Kiisu deviated from that popularly “smelly” connotation with the addition of homemade buah keluak sambal and pickled ginger, which introduced a tinge of spice and zest. 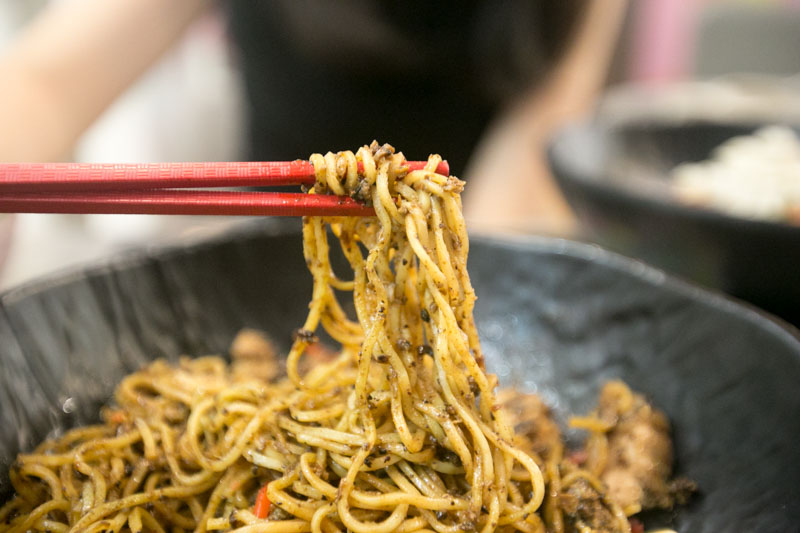 The noodles were incredibly springy and reminded me of a mix between maze soba, bak chor mee and spaghetti bolognese.

After mixing the buah keluak with the noodles thoroughly, I couldn’t taste any pungent bitterness or fermented richness.

Instead, all I tasted was a pleasant meatiness with underlying umami flavours, just like minced meat with a tinge of black bean. Occasionally, I bit into the slices of pickled ginger, which helped to cut through the earthiness from each bite. 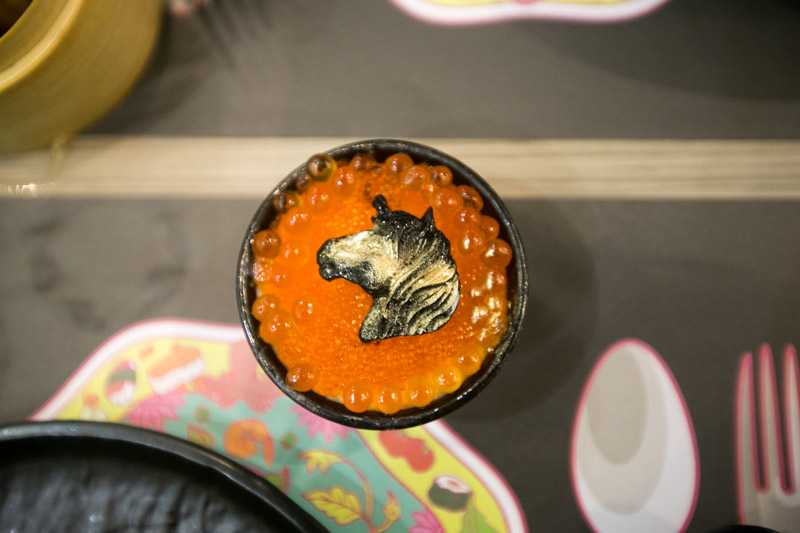 One look at Uncle Kiisu’s small bites section of the menu and I knew I had to try its #MythicalChawanmushi (S$4.80).

This version of the traditional Japanese steamed egg custard dish is filled with scallop chunks, an overflowing pile of ikura, and a truffle-infused and blowtorched jelly that’s shaped like a magical unicorn.

Be quick to eat this dish because the magical unicorn will melt as soon as it touches the steamed chawanmushi, thus explaining why it’s so ‘mythical’. It literally disappears before your very eyes! 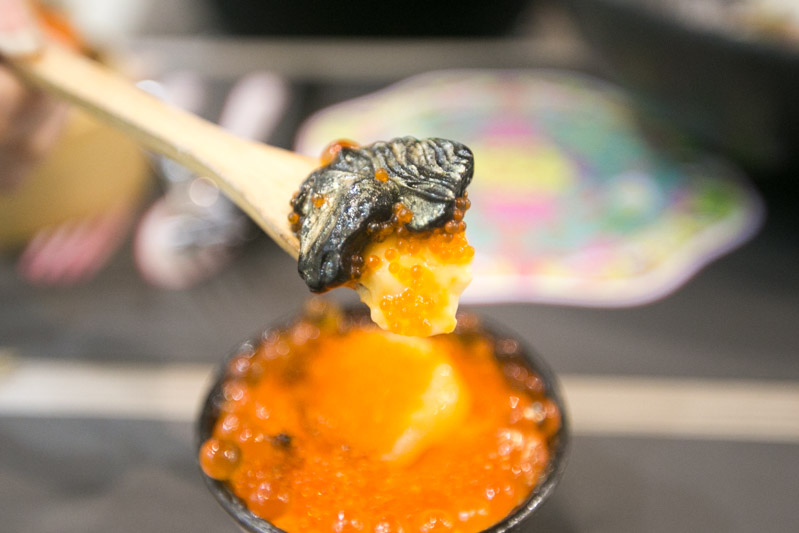 What made this chawanmushi so different was the addition of truffle and ikura, which gave each mouthful of silky chawanmushi an added smokiness and (literal) burst of flavour.

Our tip on how best to eat this dish: once the jelly unicorn melts into a black puddle, mix it in thoroughly so the smoky flavours won’t be too overpowering. 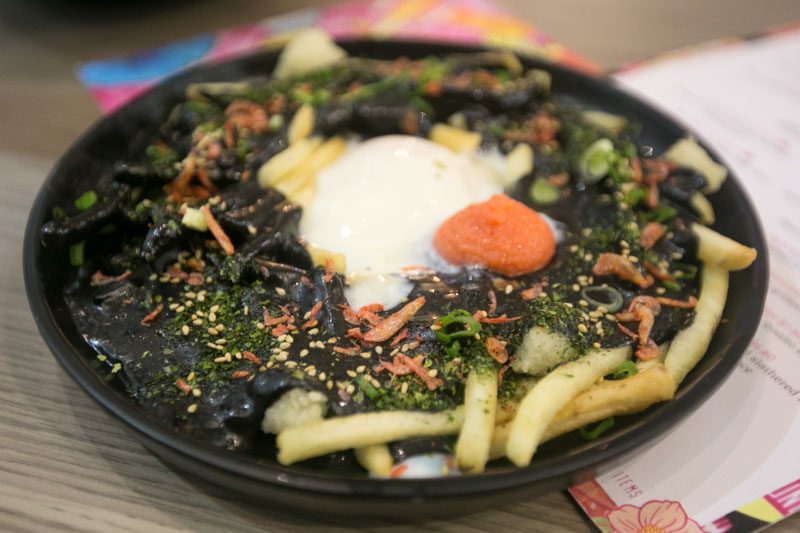 Uncle Kiisu’s version of cheese fries and fish & chips came in the form of #BlackFriesDay (S$10.80), which was served with squid ink cheese and mentaiko.

You can also choose to upgrade this dish with uni cream sauce for S$2. 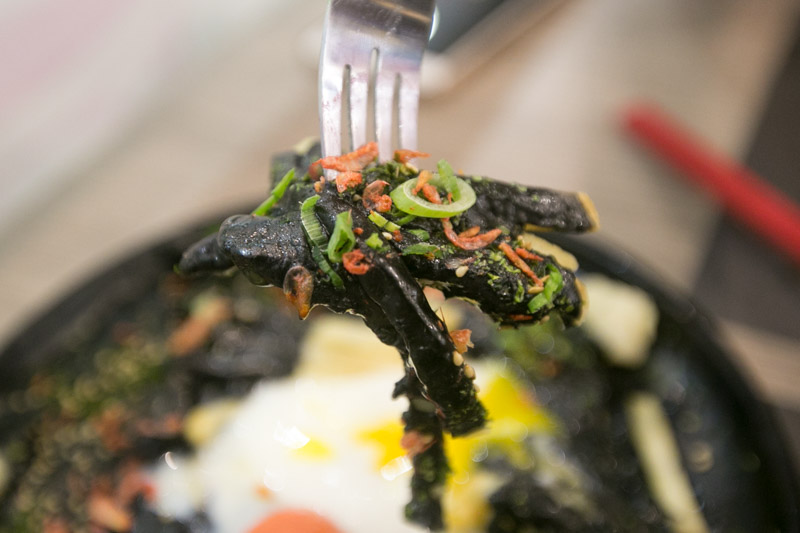 The mound of black squid ink seemed intimidating to start off with, but to my surprise, the taste of the dish was more cheesy and creamy than anything else. The mild briny earthiness only came as an aftertaste, but that in itself wasn’t too unpleasant either.

My only gripe would be that the fish nuggets were too airy (we were told later on that they were fried with light cornflour) and didn’t pair well with the richness of the squid ink and mentaiko. 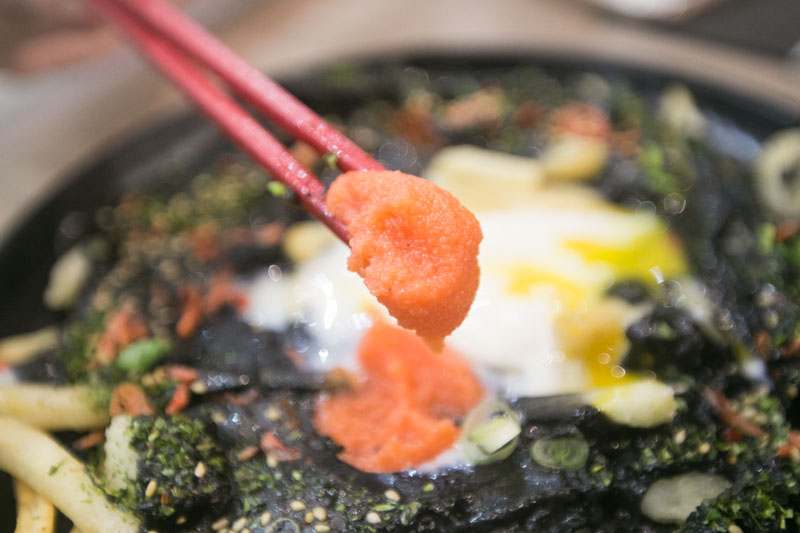 What my dining companion and I unanimously fell in love with was the clump of mentaiko sitting in the middle of the dish. It was a burst of heavenly umami flavours; salty, savoury and sweet all at the same time. 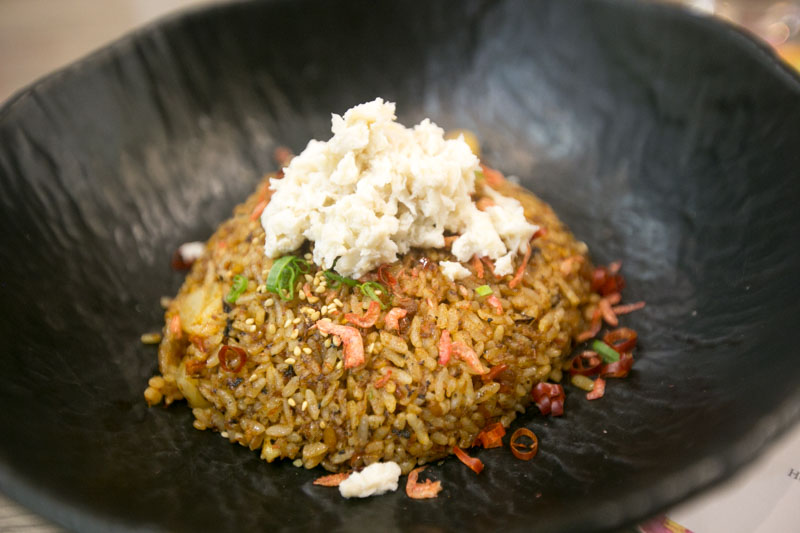 While this plate of fried rice might look normal to you, don’t be fooled. This is Uncle Kiisu’s #SpicyCrabFriedRice (S$19.80), which incorporates spicy rempah, scallops, crabmeat and diced prawns. The wok hei smokiness hit me almost immediately, just the way a good plate of fried rice should. Every bite was spicy and salty, thanks to the addition of shallots, chilli and garlic. I could taste hints of turmeric and ginger, which added a tinge of fragrance to the dish.

As I continued to savour the fried rice, I could taste a natural sweetness from the fresh crabmeat and scallop.

Admittedly, the dish was a tad too strong and rich, and might come across as too salty for those who prefer lighter flavours. When I was a child, I’d watch my grandmother cook kueh pie tee at home and help her line the crispy shells with mang kuang, also known as stir-fried sliced root vegetables.

Uncle Kiisu replaced the traditional mang kuang filling with unagi coleslaw, and topped the appetiser with tobiko and bonito flakes. 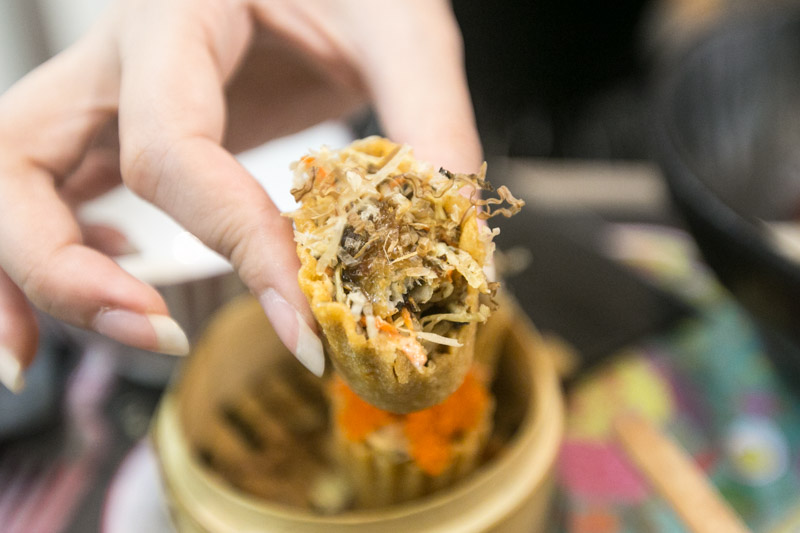 I absolutely loved this dish because the coleslaw was mixed with kabayaki sauce, a sweet and sticky sauce that’s normally used to coat unagi. The minute I popped the kueh pie tee into my mouth, I got a burst of cool crunchiness and barbecue-like sweetness at the same time.

The bonito flakes were smoky and I could taste hints of furikake in the coleslaw itself, which added umami and salty flavours. 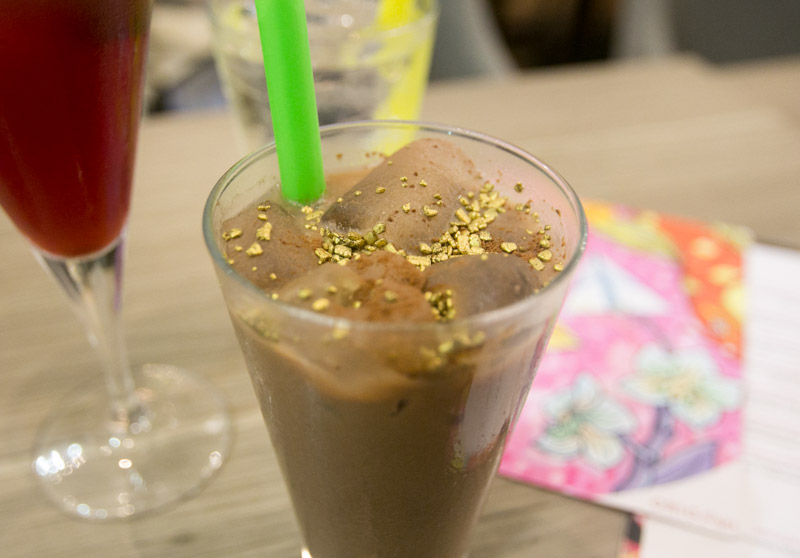 We got the Mino Dinosaur (S$3.50), which came topped with shiny Milo nuggets. Thankfully, it was indulgent and comforting without being overly sweet.

If you’re looking for something unique to spice up your meals, Uncle Kiisu is the place to go. Its menu is adventurous, filled with intriguing names and descriptions, and it executes each dish with spot-on precision. Despite its eccentric slant, you can still see local influence from dishes that are based off fried rice, mee siam, kueh pie tee and many more.

Uncle Kiisu wouldn’t be the type of restaurant you’d stumble upon unknowingly given its obscure location. It’s the type of place where you’d have to know about it in order to make a trip down to Square 2 in the first place.

Do note that Uncle Kiisu’s a la carte menu will only be available for lunch from June 2019 onwards as it’ll be launching its omakase menu for dinner service.