Walking into the restaurant, I was greeted by a luxurious interior. The old school Peranakan floor tiling also reminded me of Chef Oon’s signature Peranakan dishes. We started with the Hainanese Pork Chop ($34++), an all-time favourite. The pork chop looked rather unassuming but the taste was out of this world. It came with homemade tomato reduction, thick cut julienne potatoes and heaps of peas. 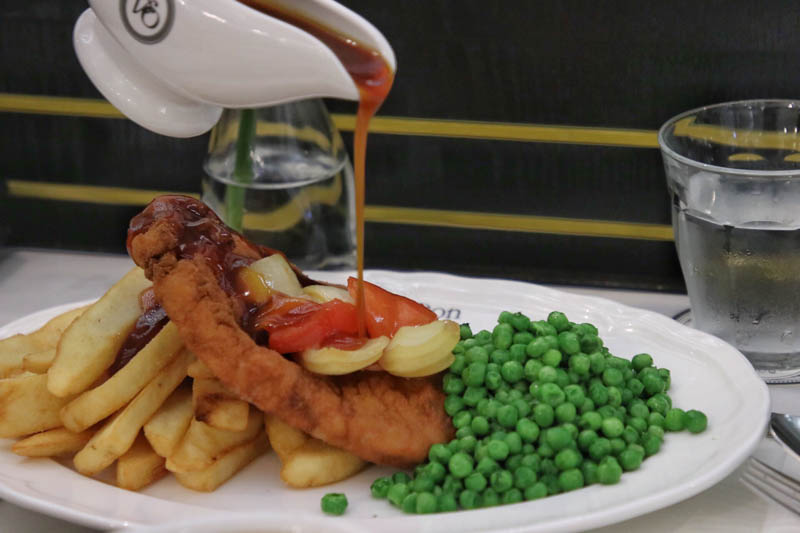 We followed the waiter’s recommendation of pouring the tangy and sweet tomato reduction over the pork. Having it with the pork chop elevated the sweetness of the pork, and added a hint of tangy flavour.

This dish actually reminded me of sweet and sour pork. Finely marbled, the Kurobuta pork used for the pork chop was exceptionally juicy too. 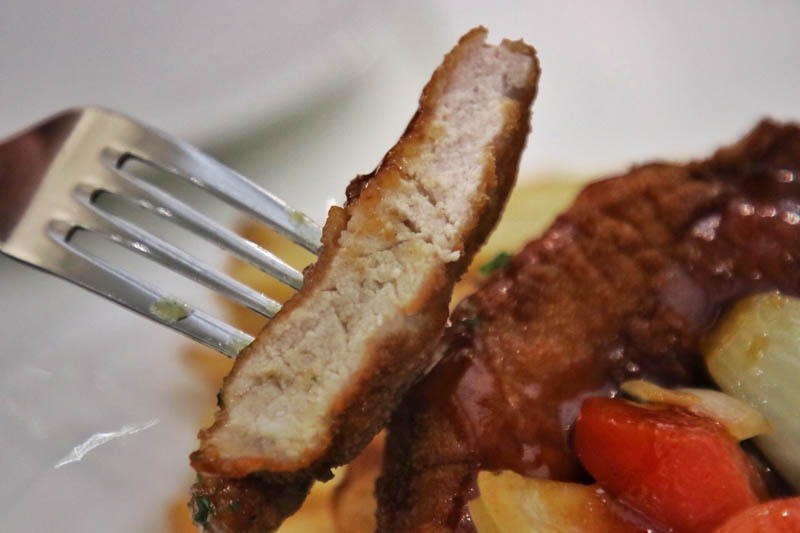 Wrapped around the juicy pork chop, the batter was thin but not soggy despite the sauce.

The waiter told us that this was a sellout dish daily. Sticking to traditional Hainanese cooking methods, the cream crackers batter gave the pork chop a unique outer crust that was thin yet crispy.

This was by far my favourite dish because of how juicy the meat was, despite its unassuming appearance. For a spicier kick, we ordered the Fish Curry With Roti Jala (S$29++). I could immediately smell the aromatic spices in the curry and the rich coconut milk. The curry came with roti jala (“net bread” in Hindi), which is an airy and light crepe with many “holes” in it. Dip the roti jala into curry and soak up all the flavours from the spices! Sweet and juicy chunks of red snapper swam in the bowl of curry. These chunks of fish had a firm bite, and weren’t too soggy even after being cooked in the curry. 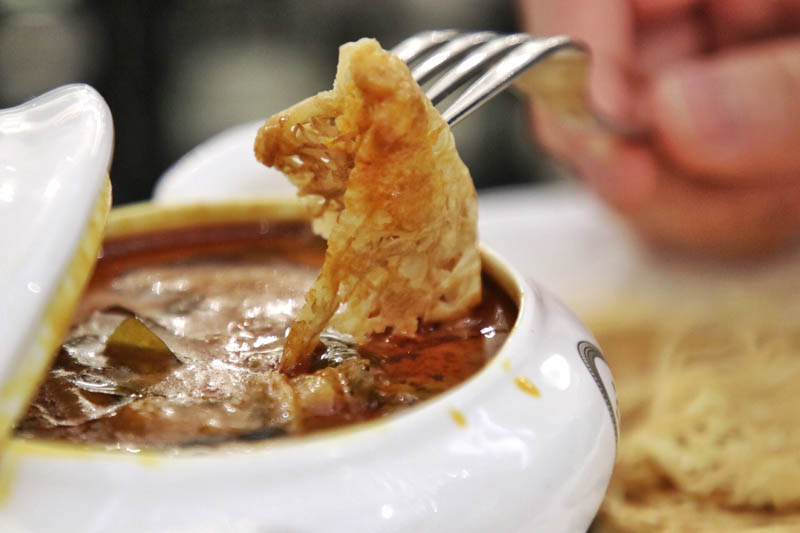 The curry was thick and rich, with fragrant spices like tumeric and star anise. However, it was slightly too spicy for me, and I found the portion too little and not filling. 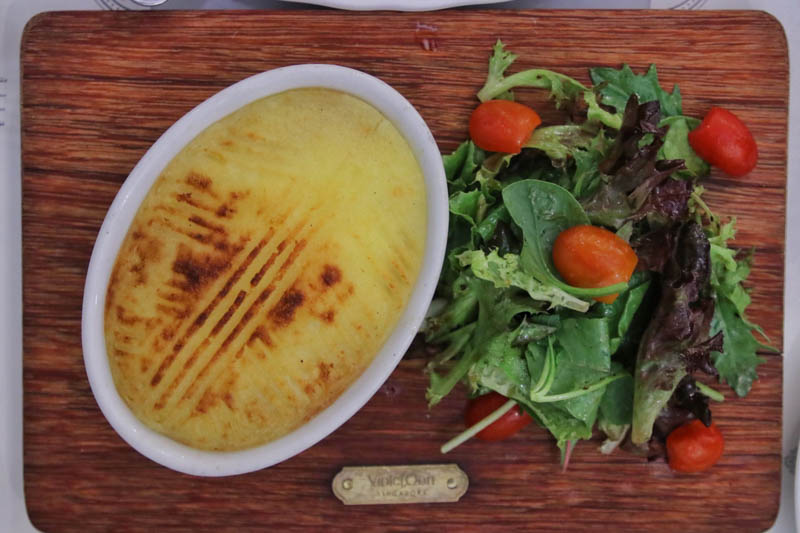 For a heartier portion, we tried one of their signature dishes, VO’s Shepherd’s Pie With House Salad (S$24++). Filled with minced beef and covered with a blanket of mashed potatoes, this dish is then baked to golden perfection. 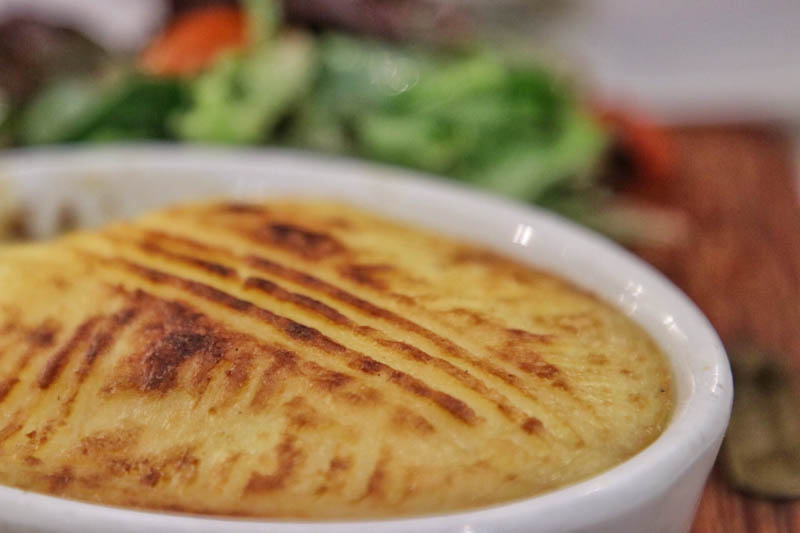 Beneath the brown and slightly crispy crust, the mashed potatoes were buttery and smooth. Unlike other mashed potatoes which are usually denser, i really enjoyed this one as it felt airy and light. Slow braised minced beef at the bottom of the dish added a meaty contrasting flavour to the dish.

I felt that the minced beef was a bit too gamey on its own. Eating it together with the mashed potatoes would help to mask some of the gamey flavour.

If you are a fan of shepherd’s pie, you should give this signature dish a try. 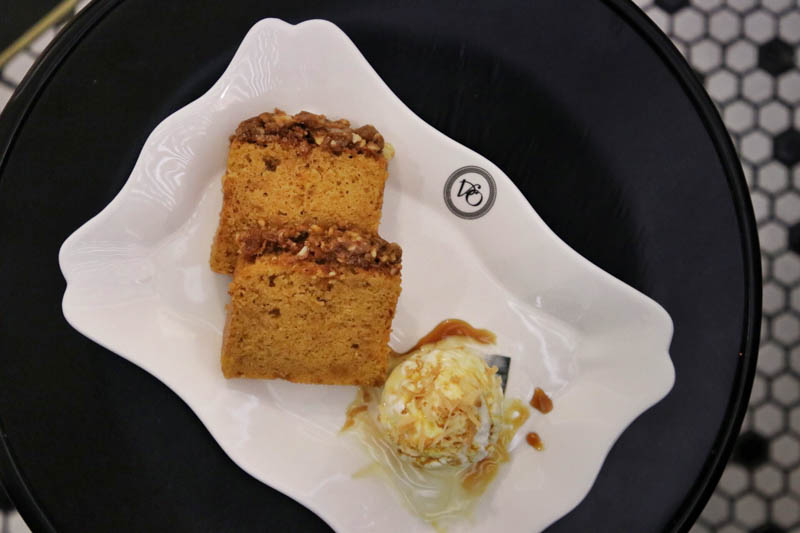 Lastly, for dessert, we got the Gula Melaka Tea Cake With Coconut Ice Cream (S$15++). This warm tea cake was topped with cashew gula melaka brittle and came with a side of coconut ice cream.

Milky with a velvety texture, the coconut ice cream was topped with coconut shavings and gula melaka syrup for an extra burst of flavour.

The tea cake was fluffy and not too sweet, and wasn’t dry at all. However, the addition of sweeter elements like coconut ice cream and gula melaka syrup made it a little too sweet for my liking. Psst, if you can’t get enough of their gula melaka tea cake, you can even buy some from their retail store.

For those who’d like a trip down memory lane, head over to Violet Oon Singapore at ION Orchard.

The food here is prepared in the way chef Violet remembers from her halcyon years. It doesn’t get more traditional than this!

Previous articleAh Hor Teochew Kway Teow Noodle, Farrer Park: I wish I were privy to the sauce’s recipe
Next articleMissed Out On Reunion Dinner Reservations? Enjoy Up To 15% Off On CNY Takeaway Deals With Citibank!