Wakon Ramen: We ‘Wakon’ You’ll Love This Volcano Seafood Ramen For Under S$10

Having spent my entire life living in Pasir Ris, I was always complaining about the lack of affordable, quality Japanese ramen. But now, with the recent introduction of the Wakon Ramen, I feel like I have just that. If you’re a Pasir Ris-ian, you’ll definitely know Coffee Express 2000, or as we all call it, ‘the air-con one’.

If you’re not, it’s the only kopitiam in Pasir Ris Central that is air-conditioned, so go there if you want to beat the heat and an assortment of local food. 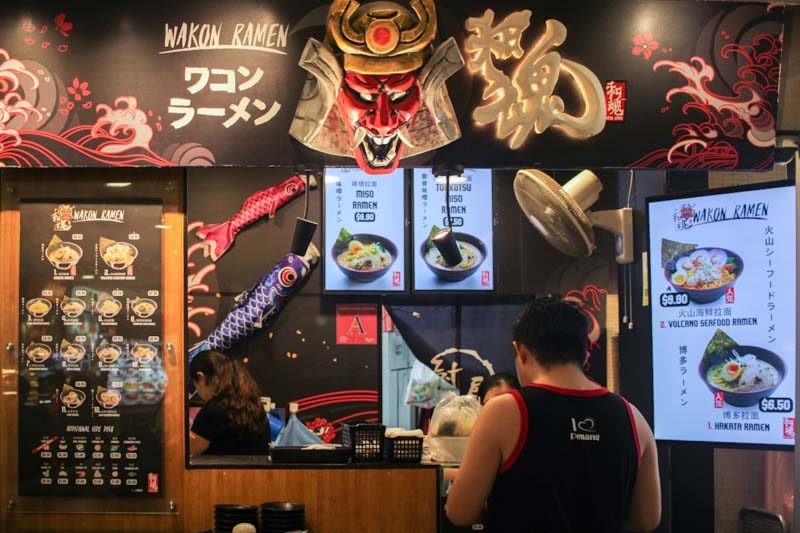 Impossible to miss, the elaborate decor of Wakon Ramen consisting of a huge samurai figurine, Japanese flags and prints will definitely catch your eye when you enter.

There was a wide variety of ramen shown on the menu outside, so — with empty tums — we decided to give this stall a try. Wakon has 12 ramen dishes, with different broths and toppings, with the Plain Tonkotsu Ramen ($4) being the cheapest and Volcano Seafood Ramen ($9.90) being the most expensive — which is already quite a steal. The Volcano Seafood Ramen ($9.90) came brimming with ingredients including two scallops, two squids, a prawn, half an ajitsuke tamago and seaweed. There is only one type of ramen noodles here, which you might find similar to mee kia. It was springy with a firm bite and paired well with the spicy broth that had a great depth of flavour.

People who can’t take spicy food, beware! You might not be able to take the spice. 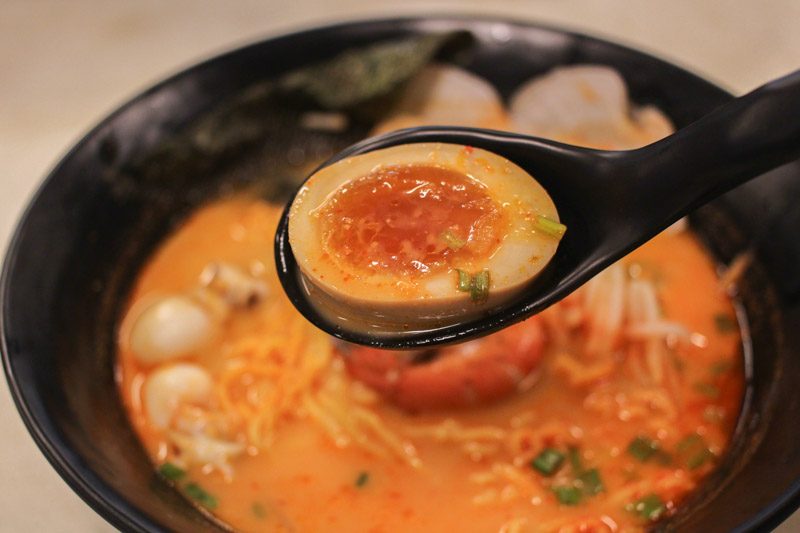 The ajitsuke tamago here was one of the best we have tasted. The yolk had a custard-like texture and paired very well with the springy noodles. The eggs soaked up umami flavour from the shoyu and was a delight to have.

Our only qualm was that we wished a full egg was served instead of just half. The prawn was decently sized and fresh, adding a touch of sweetness that you can taste in the broth. 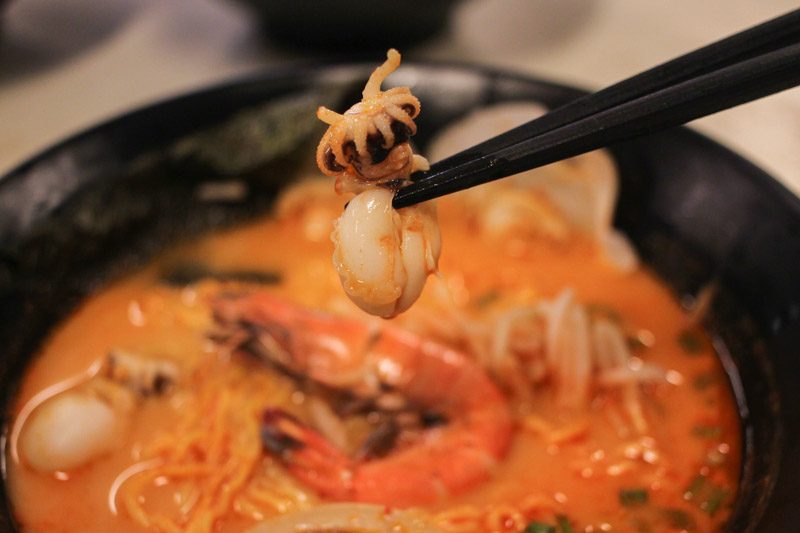 While it is easy to overcook squids, they were cooked perfectly — not too tough, and not too mushy. The scallops were a tad stale and had a slightly fishy taste. It may just be a one-off, and hopefully, the shop will bring in fresher seafood in future. If seafood is not your thing, the Hakata Ramen ($6.50) might be more suitable for you. This bowl came with two slices of cha shu, half an ajitsuke tamago, beansprouts and seaweed. The pork broth was chock-full of flavour without being too salty, contrary to what you might find at most ramen shops. It was also not too greasy and light on the palate. Although the cha shu pieces here were big, it was a pity that they turned out rather bland. They did, however, have a good ratio of fat-to-lean meat. 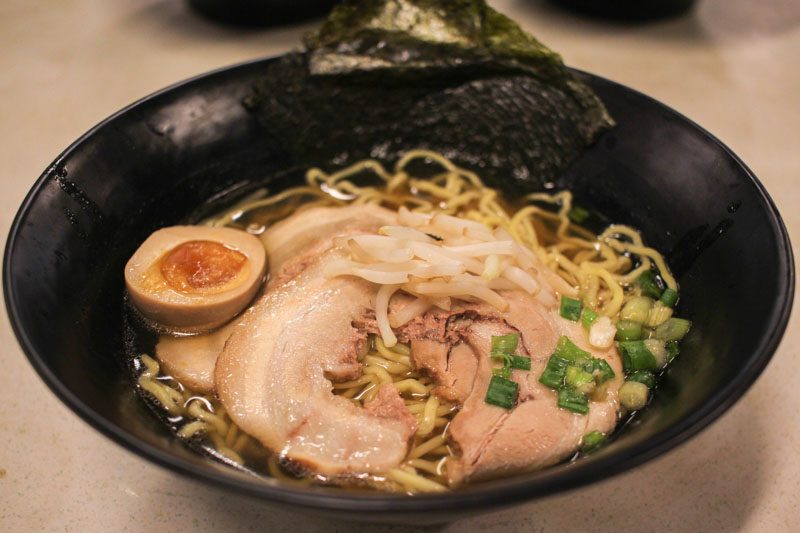 Last but not least, we tried the Tokyo Ramen ($6.90). This bowl of ramen came with two slices of cha shu, and similarly, half an ajitsuke tamago, beansprouts and seaweed. The broth here is clear and light, but it still had flavour. We reckon this healthier bowl would be perfect for those who are feeling under the weather and craving for a bowl of ramen, or if want something hot on a cold night. 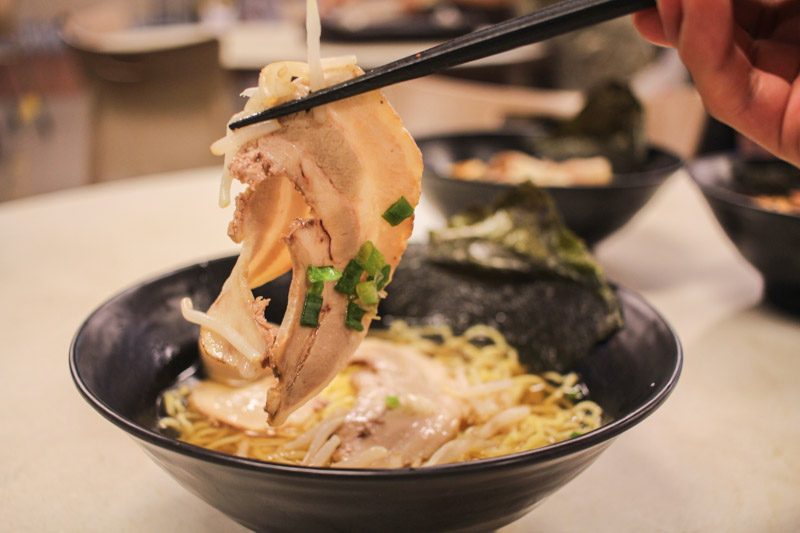 Similar to the Hakata Ramen, the cha shu slices were a tad bland and could do with more seasoning. Truth be told, we still can’t get our heads around how well the ajitsuke tamago served in every bowl was executed. The next time we’re there, we’ll be sure to add a full egg for just an additional $1.50.

There were hits and misses for the ramen, but if you ask me, it’s a really good deal for its price. The Volcano Seafood Ramen is definitely something I will recommend, especially to those who like their food spicy.

Furthermore, it is the only place in Pasir Ris (that I know of) that sells quality ramen at such affordable prices.

Previous articleSample Various Renditions Of Scotch Eggs & Free-Flow Canapés This 8 October At Rabbit Carrot Gun
Next articleAh Yee’s Soon Kueh: Traditional Kuehs Made Fresh Daily At Tembeling Road Will Give You A Taste Of Home