On the corner of Serangoon Road, sits White House Teochew Porridge 白家潮州糜 peddling perhaps one of the most underrated dishes in the rich tapestry of Singaporean cuisine—Teochew Porridge. Porridge usually gets a bad rap for being the go-to food item for the ill, but I reckon that porridge can offer so much more.

If you are at all familiar with Teochew Porridge or mui, you’ll know that it is a little different from its Cantonese cousin (jook). Unlike the thick Cantonese jook, Teochew mui has a more watery consistency and is usually accompanied by an array of savoury side dishes. Just like a mixed rice stall, your Teochew porridge entirely customisable with varying prices on each dish. So, it’s Teochew porridge exactly on your terms, which I’m sure is great news to all picky eaters out there.

A little hungry and eager to escape the afternoon heat, I made my way to White House Teochew Porridge ready for a hearty meal. 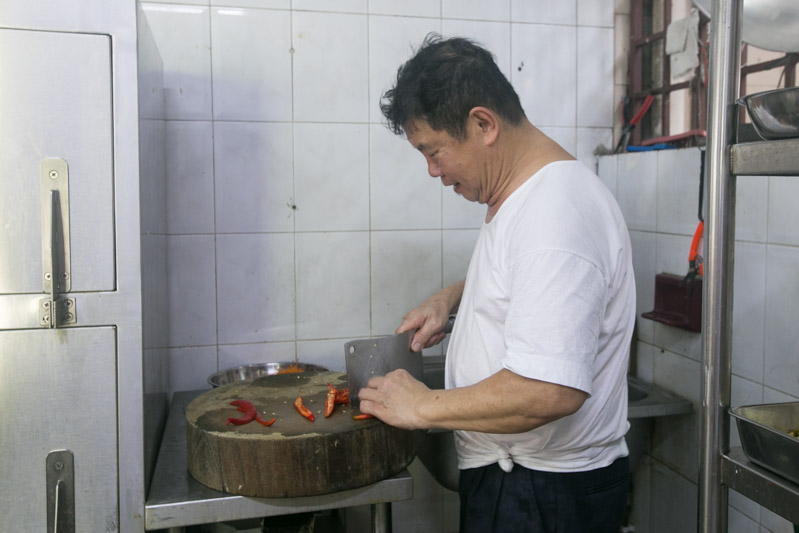 I found the owner, Mr Peh Lee Soon in the kitchen and hard at work busying himself with either steaming fish or prepping for the other smorgasbord of dishes available at White House Teochew Porridge. An affable and jovial man, Mr Peh always had a ready smile to my questions as he moved swiftly around the kitchen.

However, a month into his retirement, Mr Peh couldn’t resist the call of the wok and was itching to get back to it. When the opportunity for the corner unit along Serangoon Road opened up, Mr Peh didn’t hesitate to jump back in. 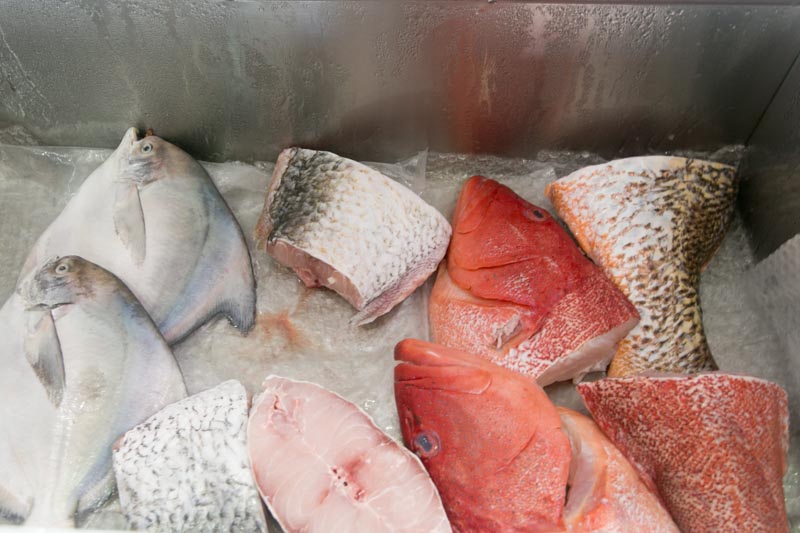 Besides an impressive selection of vegetables, fish cakes and meat dishes, you can also find White House Teochew Porridge’s splendid section of fresh fish. A trademark of any good Teochew porridge joint, if you don’t spot a chiller with a display of fish perhaps the place is not worth your time. 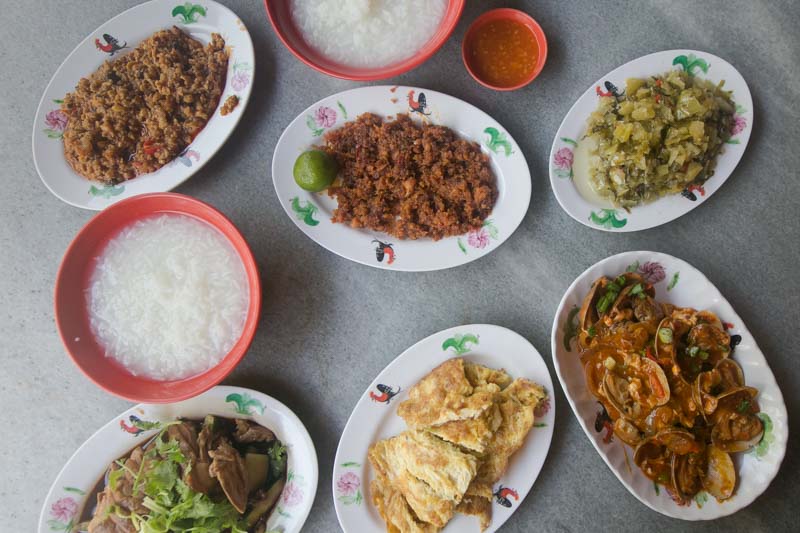 It might seem a little silly to have a bowl of steaming porridge on a sweltering afternoon. But trust me, if the porridge is good you wouldn’t mind sweating through each mouthful—which is exactly what I did at White House Teochew Porridge.

To give you a good idea of what is offered at White House Teochew Porridge, I ordered a couple of their popular plates as well as some of my must-haves. 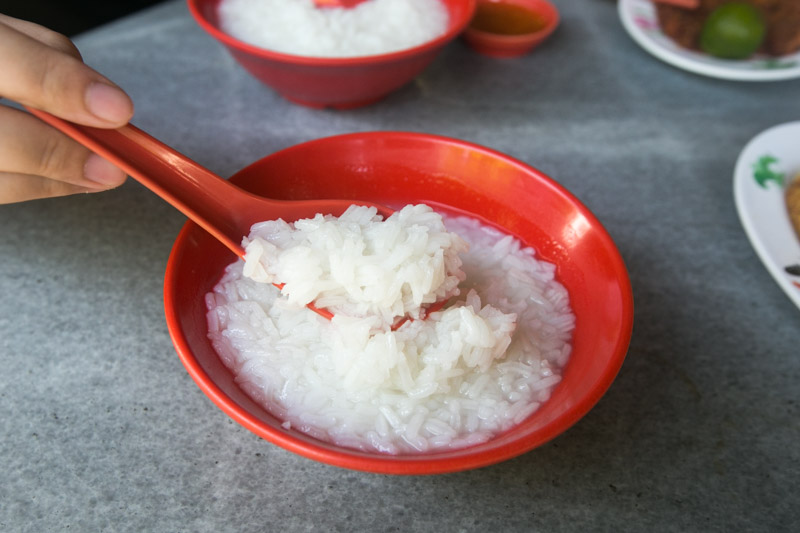 We’ll begin with the main event, the Porridge (S$0.60 per bowl). While seemingly inconsequential, the porridge actually serves as an important canvas for the other punchier dishes to shine.

Teochew Porridge should by no means be bland, and the grains should be soft but still hold their shape. Just like freshly-cooked rice, you should be able to detect the mouthwatering fragrance of rice when it’s near. 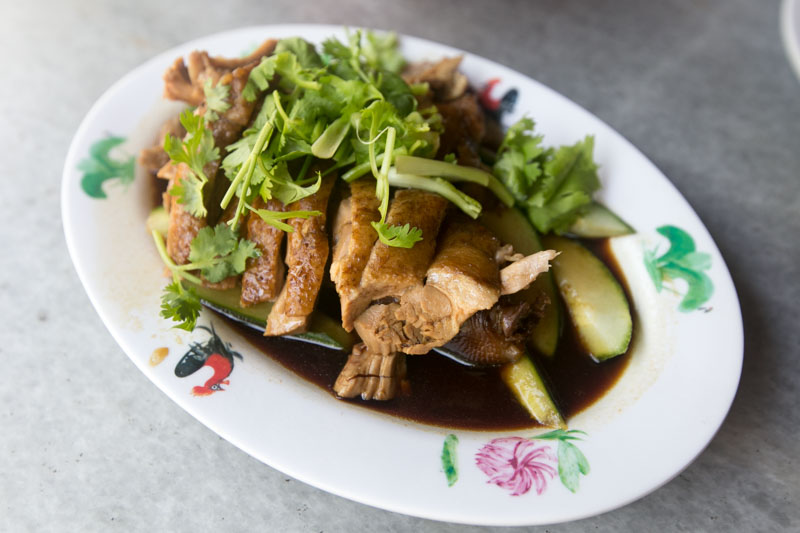 One of White House Teochew Porridge’s specialities was their Braised Lor Ark (S$6). This duck was made with 12 spices and braised for long hours before being doused in aromatic dark sauce. 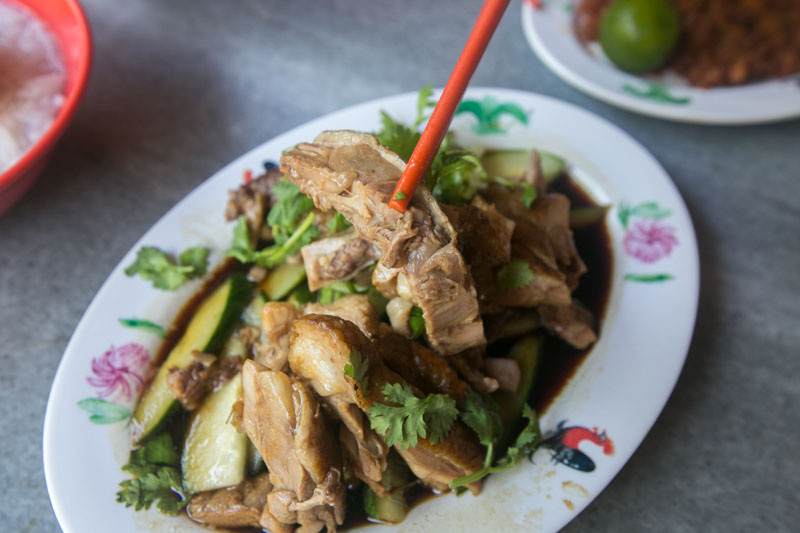 Tender, savoury and with no unpleasant gaminess, I would have gladly polished off an entire plate on my own. The duck was just as good (if not even better) than those you can find at any reputable hawker stall. 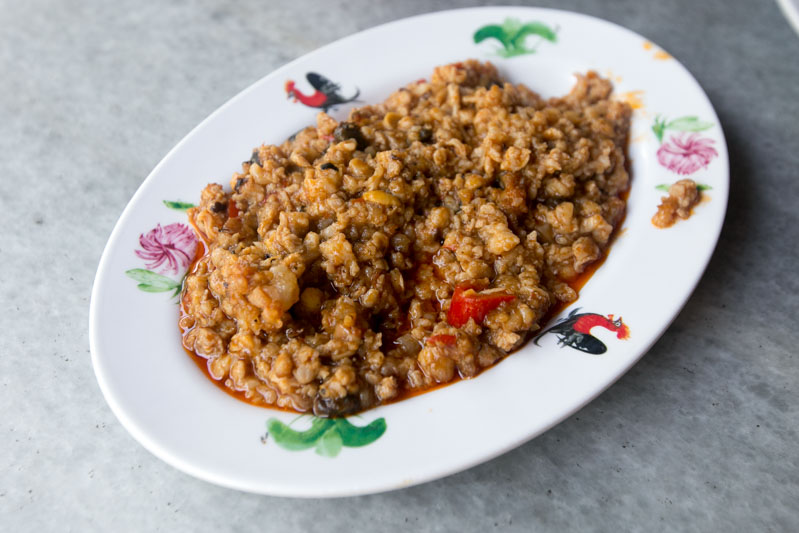 When it comes to Teochew Porridge, the side dishes tend to be a little saltier to complement the porridge. A prime example of this would be the White House Teochew Porridge’s Minced Pork With Black Bean (S$4). 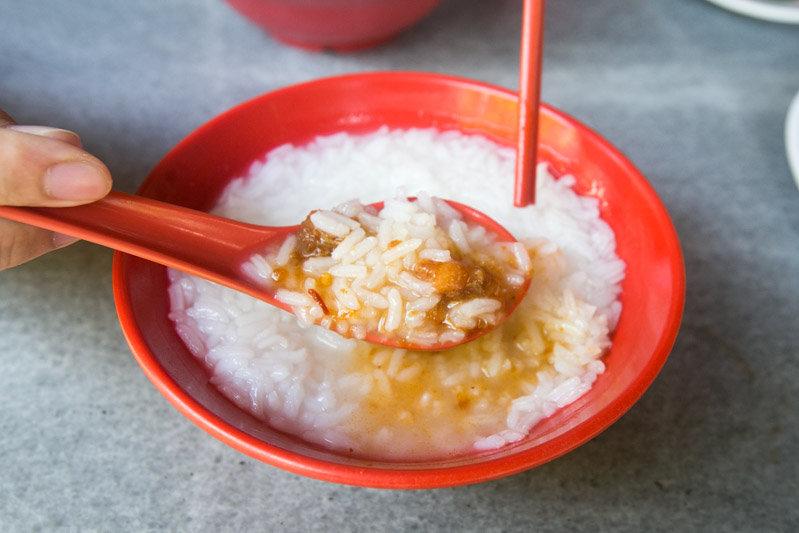 There’s no denying that salty, umami-laden black beans and juicy minced pork are excellent together but with porridge, it’s downright satisfying. Be careful, you might end up finishing two bowls of porridge with the pork. A quintessential side dish when you are having Teochew porridge has to be a mandatory plate of Preserved Vegetables (S$3). A seemingly simple dish, there was something that was just so tasty about it. 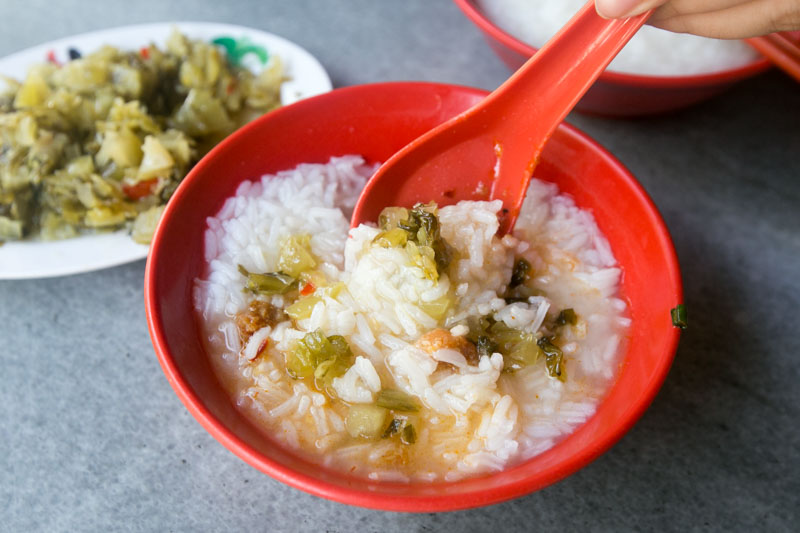 From the way the vegetables were prepared to that addictive salty bite, everything just worked.  My guess is that it is really the hand that prepares these dishes that make a difference, and it only comes with years of experience like Mr Peh has. A useful comparison would be how some zi char stalls are just better than others, even with the same dishes. One White House Teochew Porridge speciality that need to be in your selection has to be their Hae Bee Hiam (S$3). Again, an easily overlooked side dish but so gratifying when added to your porridge. If you like, you can hit the Hae Bee Hiam with some lime and that will brighten all those flavours.

Fragrant and punchy with a little heat at the back of your throat, this Hae Bee Hiam checked all the boxes for me. 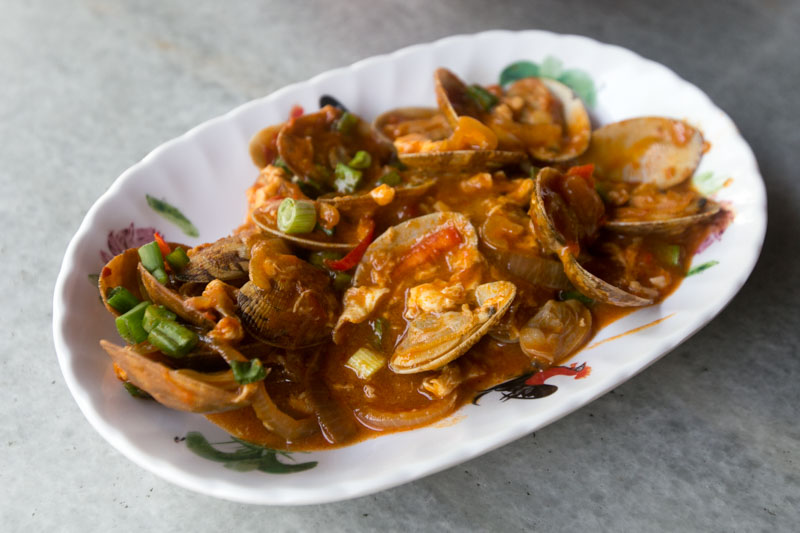 For my last plate, I was feeling a little adventurous and chose the Clams (S$4) to change things up. White House Teochew Porridge was pretty generous with the portion of the clams. They were prepared in a tomato-based sauce with sliced onions and chopped scallions as garnish. 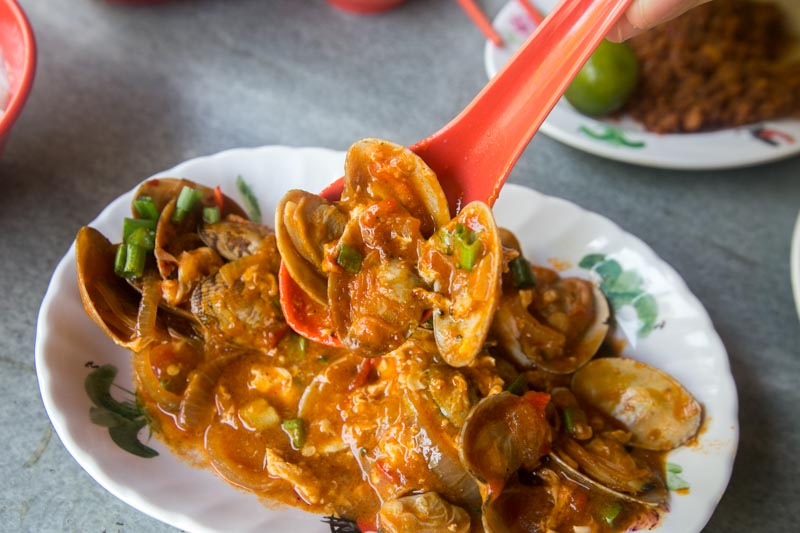 The clams were plump and fresh, already a huge plus since there is nothing worse than bad shellfish. The clams were just a little sandy but it was something I was willing to overlook on account of overall taste and quality.

Just like the many patrons of White House Teochew Porridge, I would gladly have a serving of Teochew porridge amidst the afternoon heat, even more so if it’s pouring.

The skill and heart that goes into preparing each dish at White House Teochew Porridge is evident from each spoonful. I just couldn’t get enough.

Clearly, Teochew porridge or any kind is more than just ‘sick people food’. It’s comforting, homely and would leave you rubbing your tummy, utterly content with the meal. If you’re still not convinced, I urge you to pay White House Teochew Porridge a visit and see for yourself.