Whenever my friends jio me out on a cafe-hopping day, Yishun is rarely a place which comes to mind.

Come to think of it, that’s because there aren’t that many well-known cafes in the area! 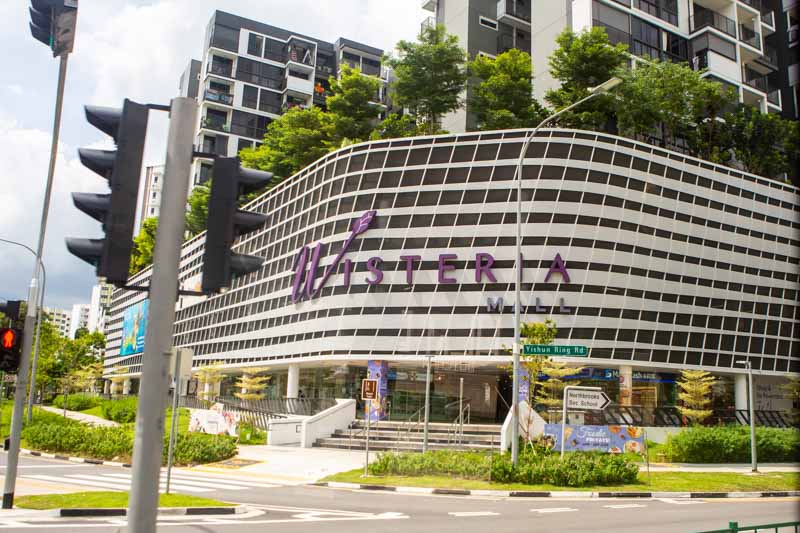 However, news of a relatively new cafe in Wisteria Mall got my foodie senses tingling. So I headed down to find out if it was worth travelling to the North for. 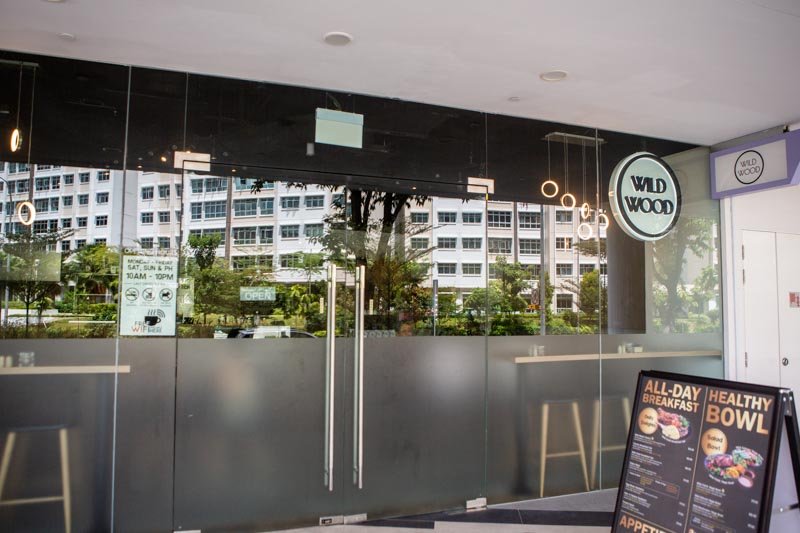 Wild Wood Cafe sits in a bright space along an unassuming stretch in the tiny mall. That said, it took us a while to find it due to its rather obscure location. The cafe boasts a pretty cosy interior, with an open kitchen where you can watch the chefs prepare your food. But the mouth-watering aroma wafting non-stop from the kitchen didn’t make waiting for our food easy.

Upon hearing that they serve up extraordinarily large portions of food, we decided to put it to the test. 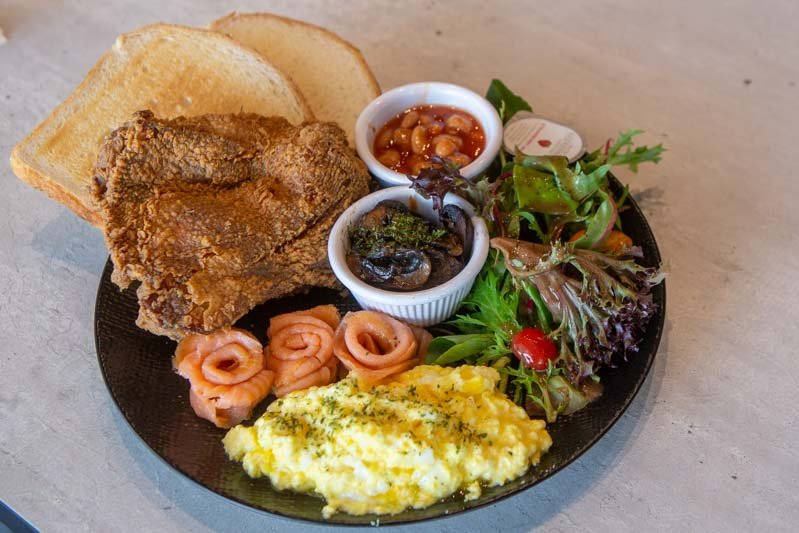 True enough, the dish came with a humongous plate full of ingredients, covering almost every inch of it. Occupying most of the space on the plate was none other than the star of the show, the fried chicken. First of all, the sheer size of the boneless chicken was truly a sight to behold on its own.

It had a remarkably golden-brown and crackly skin which we couldn’t wait to take a bite of. 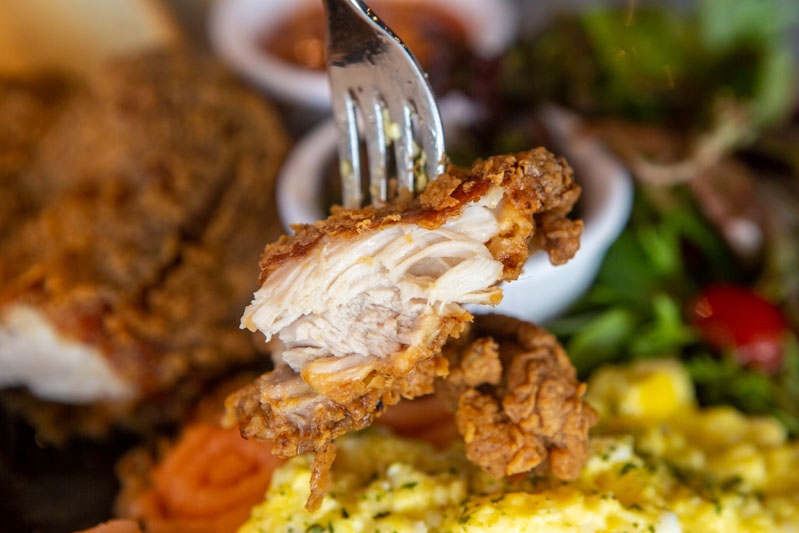 Tearing the skin apart revealed the glorious and juicy meat within. 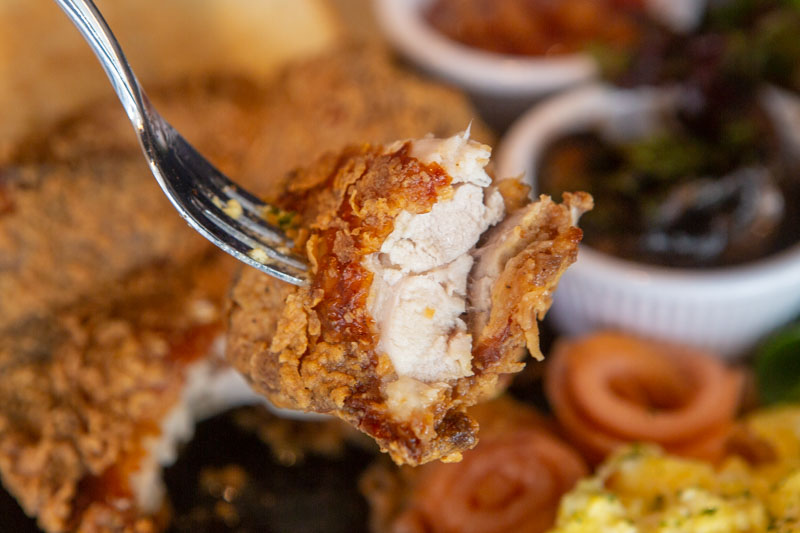 Seeing that the meat was moist and juicy, all my worries about them undercooking it faded away. They absolutely nailed the cook on the supremely large piece of chicken.

Since it was an all-inclusive breakfast set, the dish came with a plethora of other ingredients. 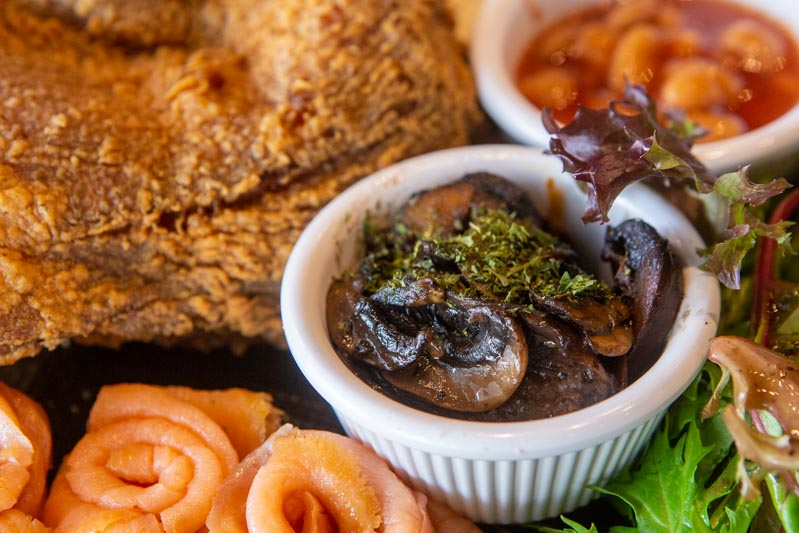 For one, the unassuming sauteed mushrooms were delicious! They had a strong salty flavour which we thoroughly enjoyed. 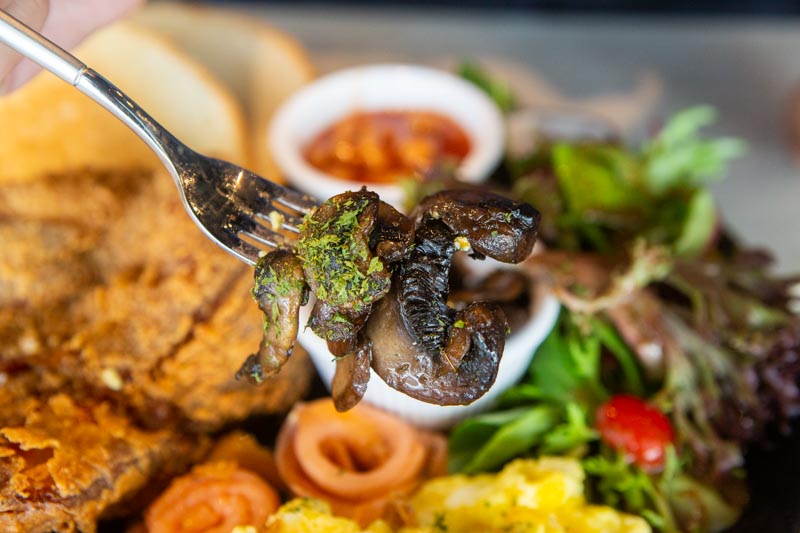 They were soft and juicy too, with a great texture. 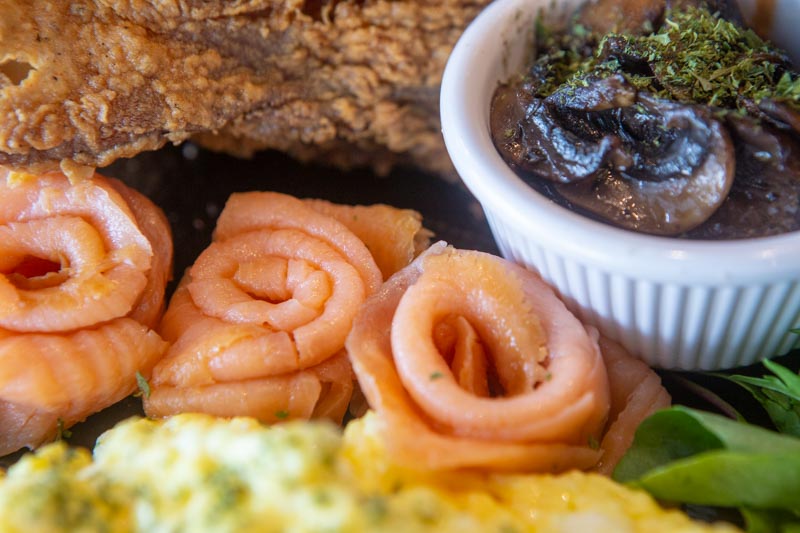 For every breakfast set, you get to choose a meat as well. We went for the smoked salmon but it turned out pretty average, unfortunately. There wasn’t a prominent smoky flavour and all we could taste was just salt. 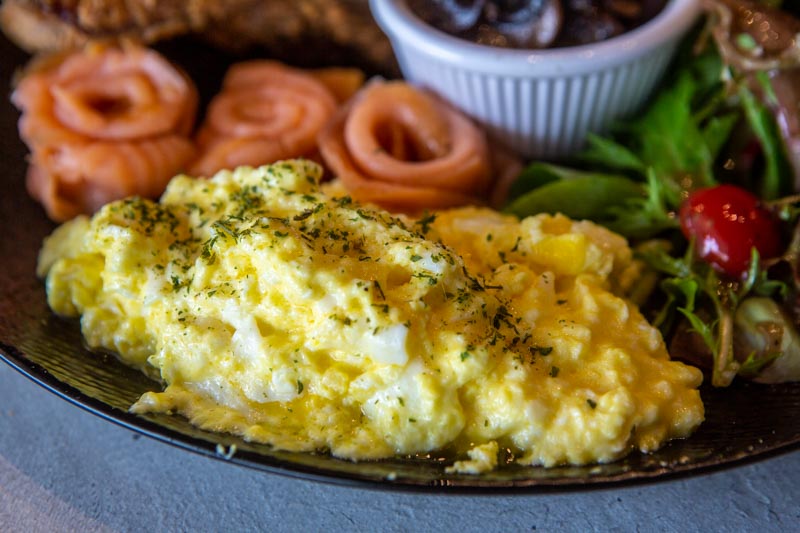 Nonetheless, we turned to the next item on the plate which looked promising, the eggs.

We went for the scrambled eggs and boy, did we make a good choice. Creamy and buttery, the eggs were absolutely to die for.

If anything, they actually reminded me of Gordon Ramsay’s famous scrambled eggs I had in London! The breakfast set also came with toasted bread, which served as a great vehicle of flavours. 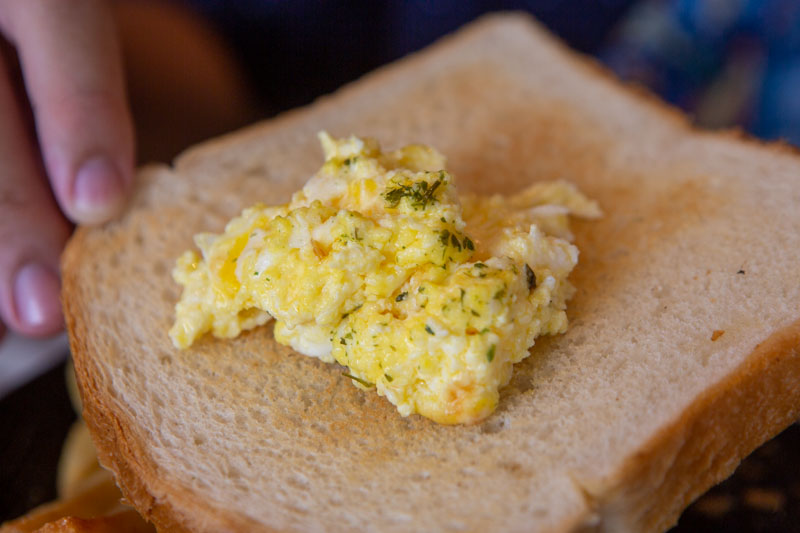 You can bet we smothered the toasts with those scrumptious scrambled eggs.

With that, I reckon the Wild Chief Breakfast Set is more than fit for a king, let alone a chief! Following such a great start, we had high expectations for the Wild Rosey (S$15.80). 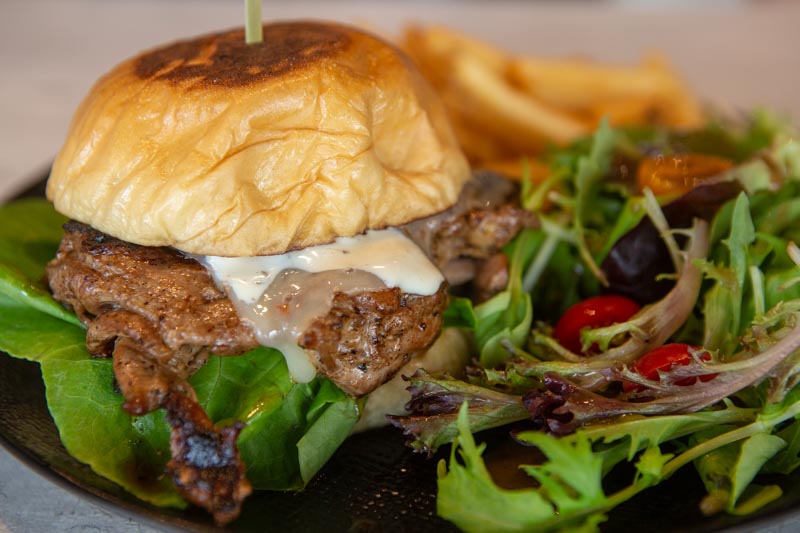 We were looking forward to picking up a strong taste of soya sauce, as a result. However, that wasn’t the case. 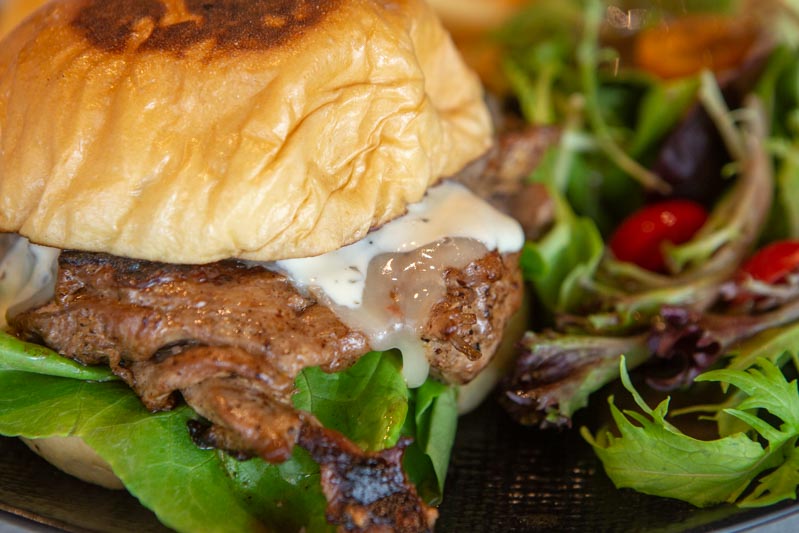 The umami flavour of the marinade came across very mildly. It was more of a touch-and-go situation, which was a pity.

That said, however, the grilled chicken was still tender and succulent. 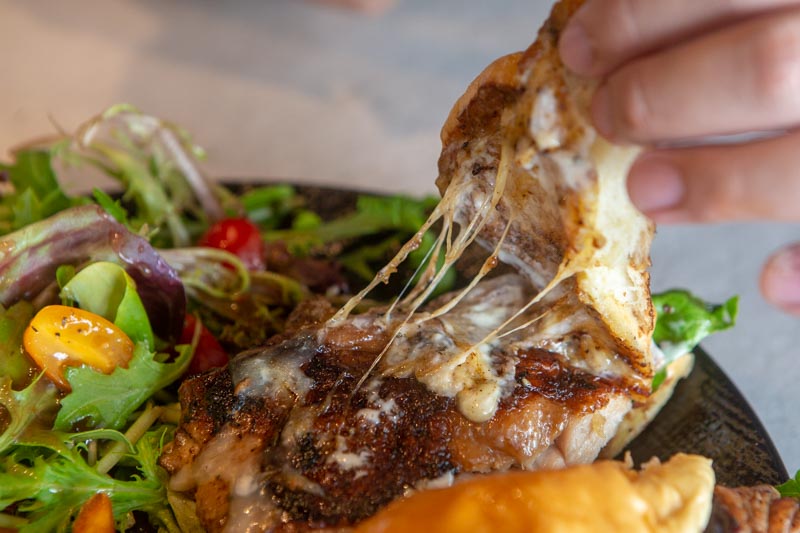 It went very nicely with the melted cheese on top, which had a bold salty flavour. 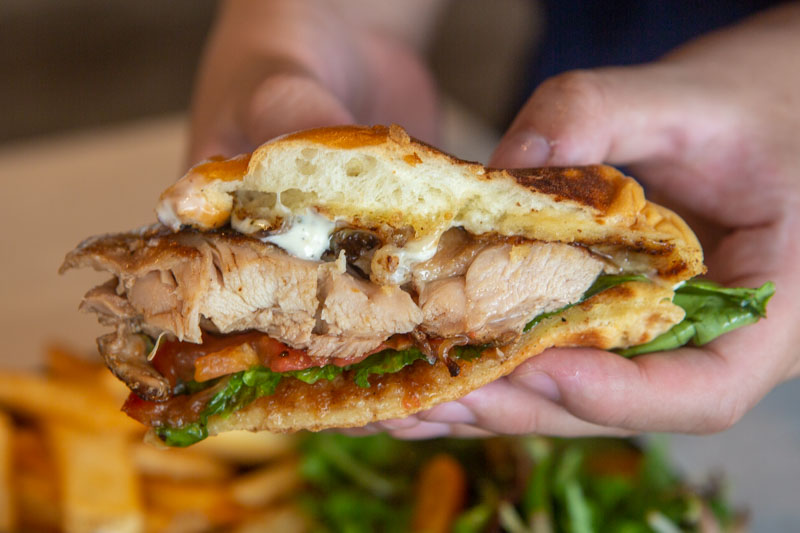 The buttery and pillowy burger buns were a delight too. They made for an all-rounded bite which kept us going back for more. 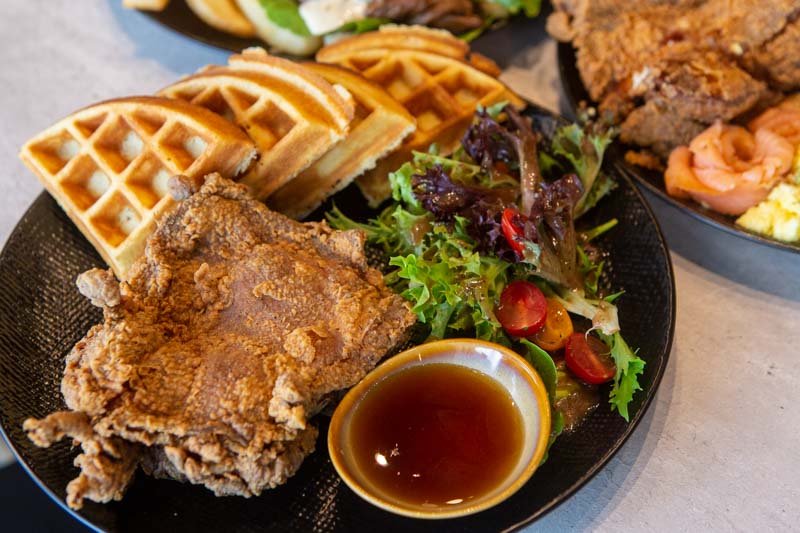 This dish is Wild Wood Cafe’s take on the American classic, Chicken and Waffles. 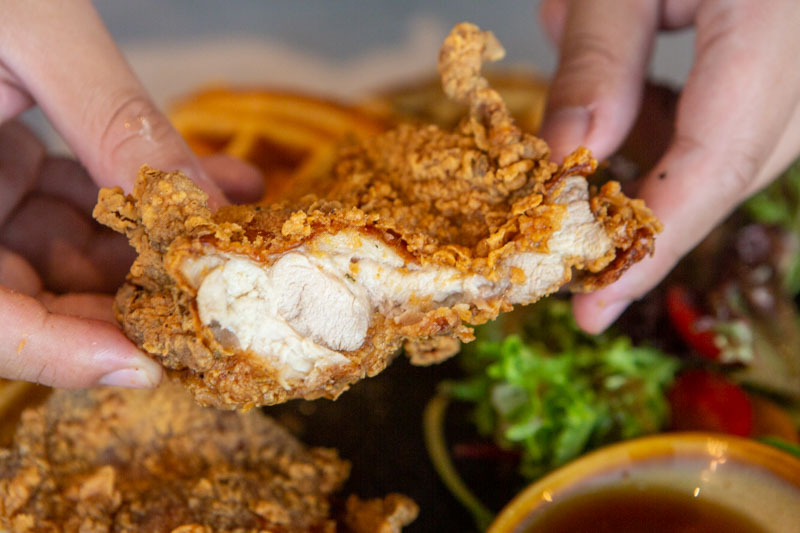 Since it was the same crispy fried chicken as in the Wild Chief Breakfast Set, we were optimistic. Crunchy on the outside and succulent on the inside, the chicken was simply addictive.

Despite the rather ordinary seasoning (salt and pepper), we still kept going back for more. It goes to show how expertly Wild Wood Cafe handles their fried chicken. 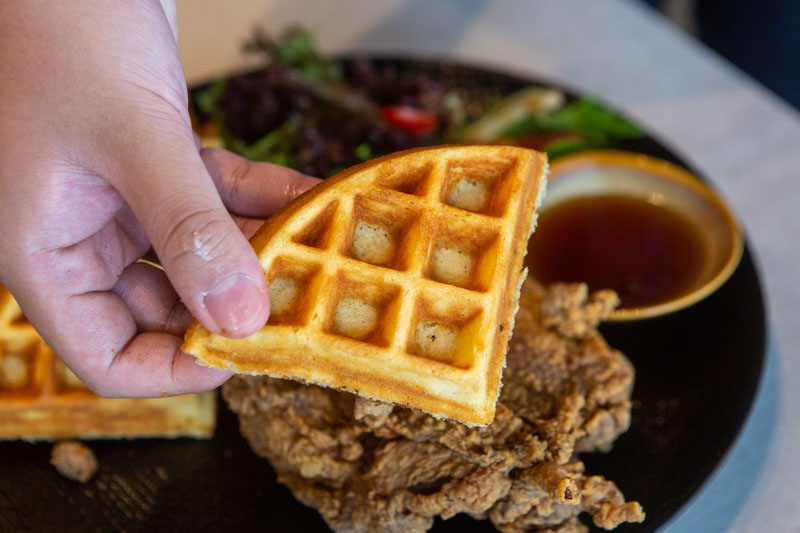 As for the waffles, they were just the way I liked them: firm on the outside, yet chewy inside. They also came with a side of maple syrup. Its strong sweet flavour was refreshing as it cut out the greasiness of all the fried chicken we had. 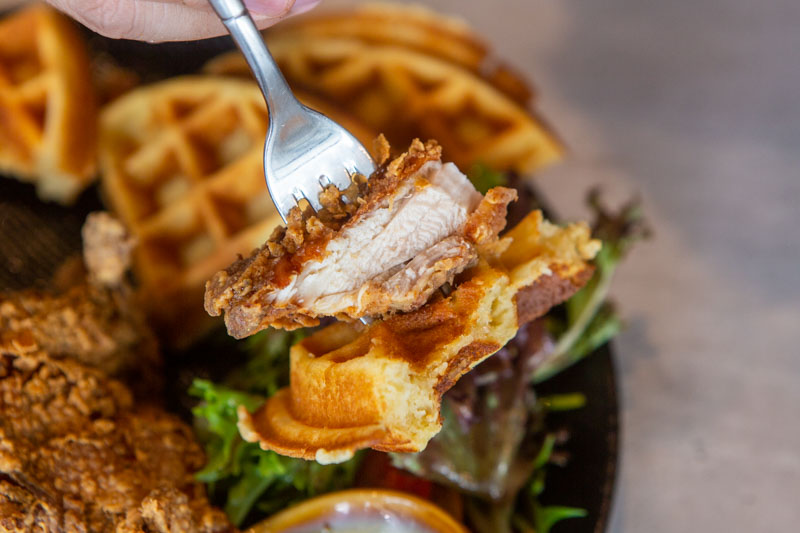 Indeed in true American style, the fried chicken and waffles complemented each other. They made for an indomitable pairing which was further enhanced by the rich maple syrup. 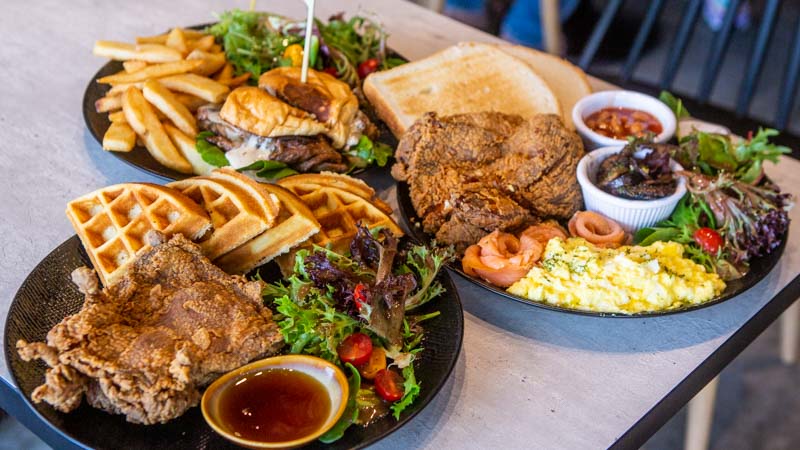 I guess we have to hand it to Wild Wood Cafe that their servings are truly enormous. Not only that, but the affordable prices of their dishes make them all the more value-for-money.

That being said, I can definitely see myself coming back, especially for their all-day breakfast sets. That sinful fried chicken is certainly perfect for a cheat day, I’ll tell you that!