Who here knows the ins and outs of what to eat in Woodlands? Not this chick, because clearly, living in the west side all my life has made me really complacent about sussing out new spots that sprout beyond my hood (unless it’s in a central area). 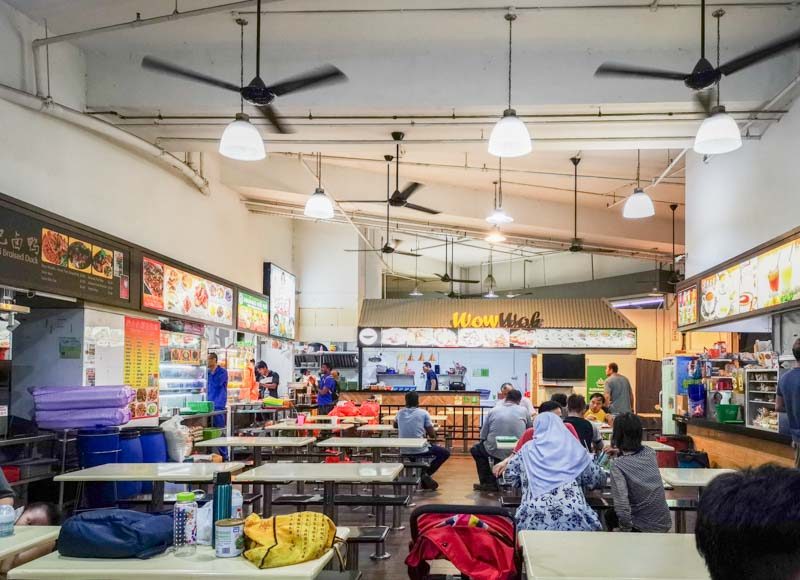 I guess I need to up my food hunt game, because I only just recently discovered there’s (almost literally) a hidden halal zi char stall located in the industrial region of Woodlands called Wow Wok by Ridhuan. It, in fact, shifted from Jurong recently and was previously known as Ridhuan’s Muslim Delights.

What makes this place a little more enigmatic than your run-of-the-mill halal stall is the chef’s backstory – where love blossomed between him, a Chinese man from Sarawak, and a local Malay-Muslim woman.

His culinary talent, together with his conversion to Islam, enabled him to share his personal favourite Asian dishes modified to suit the halal diet. 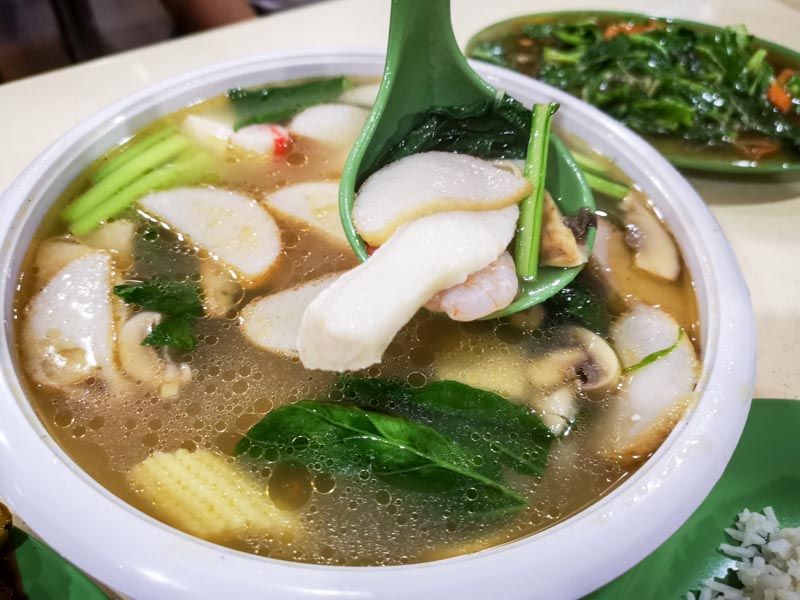 To warm my empty belly, I ordered the Seafood Soup (M) ($8) which was loaded with ingredients like baby corn, fish cakes, fish meat, shrimp, mushrooms and assorted leafy vegetables. It was hearty, but with little heart. I suspect that’s due to the immense amount of salt I detected as well as the obvious slick of oil floating atop.

I wish it tasted of sincerity in wanting to feed diners who’ve come from far and wide to have a taste of this stall’s fare. Unfortunately, it simply tasted of “here’s some soup to wet your rice”. 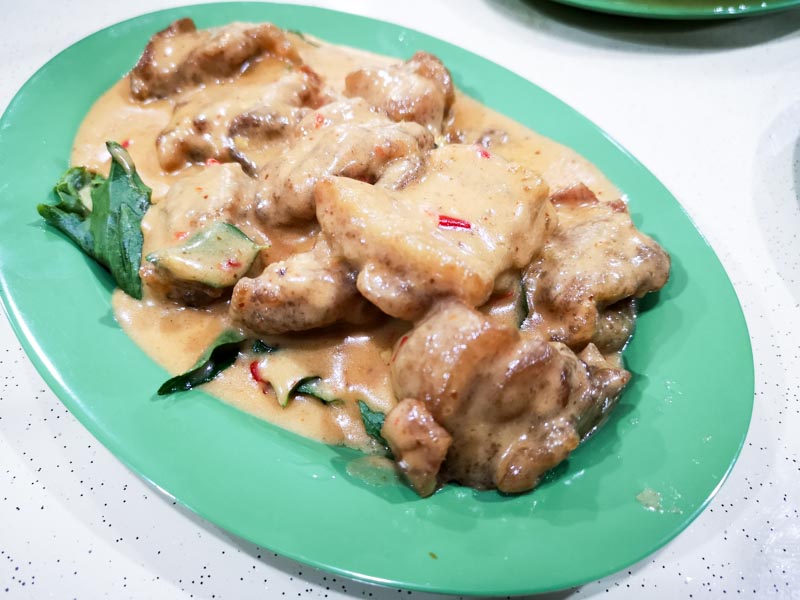 This dish was something that I’d been really eager to try, given I’d never heard of anything like it. The Tom Yam Cream Chicken (S) ($10) came drowning in cream sauce that only emanated a hint of heat, eliminating the association of tom yam in its name.

It was quite evident that the chicken chunks were fried sans seasoning, making it dependent on the tom yam cream sauce for flavour. This made the dish quite hard to enjoy as I chewed on the chicken being constantly reminded that I was enjoying the sauce, not the meat. 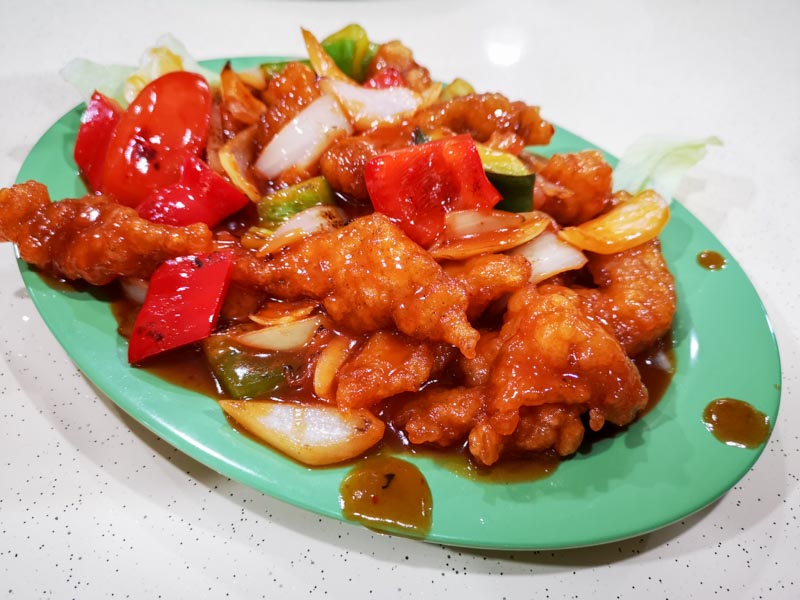 The Sweet & Sour Sliced Fish (S) ($10) was a relief from the first two let-down dishes. The sauce’s tanginess was enjoyable and the batter remained slightly crisp even some time after it was served. So far, this is the only dish that made a decent impression. 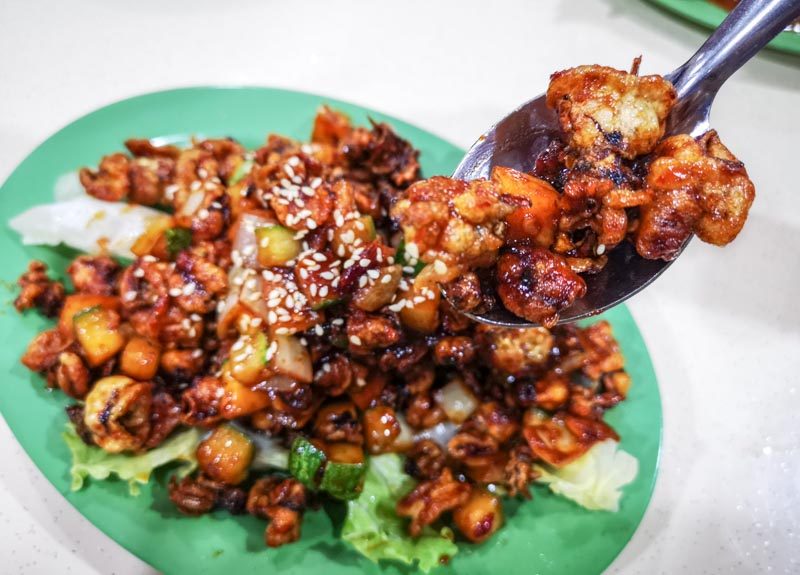 I really love squid, so I had to take the opportunity to order the Baby Squid (S) ($12), which was fried till crisp. I took my first spoonful hoping it would be this amazingly sweet, savoury and crunchy scoop, only to be met with one-dimensional flavours.

To be fair, they were really crunchy. The kind that you can hear in your ears as you chew, emanating throughout your jaw. That’s possibly the sole reason why I kept going back for more; just the sheer addictiveness of its crispy fried goodness. Tired of the regular rendang you get at nasi padang stalls? Try this variation for a change — the Sambal Beef (S) ($10). The beef was really tender, with a nice chew. The gravy was almost a little too sweet for a sambal, in my opinion, but I suppose that’s really a personal preference. The dish’s saving grace was still indeed its sauce; it was my top choice for when I needed a nice complement to the rice. Every Asian meal must include a plate of greens, so I went for the very rudimentary Baby Kailan (S) ($6). It’s quite hard to mess up this basic dish, but I still found a reason to find fault with it.

It could be me having a fussy day, or they simply overcooked the kailan till it was completely wilted, limp and downright soggy. No crunch remained, even in the stems. I really wanted to absolutely love one or two things from this stall. So far, that hadn’t happened. And then an unlikely saviour (slightly) changed my mind. The Black Pepper Mee Goreng ($4.50) caught my attention due to its sheer novelty, and even though I’m not a fan of yellow noodles, this formula worked!

I suppose it was the potent sweet and peppery taste mixing in with the familiarity of the starchiness of the noodles. The noodles could have been cooked a little less — they were admittedly a tad too soggy — but other than that, I actually could appreciate it.

For the distance one would have to travel to locate this stall, it sure wasn’t worth the venture. I’d read so many positive reviews about the food here, and I really loved the story behind the business. It was simple and heartwarming, something I wish the food resonated as well.

Unfortunately, I couldn’t fathom any reason I would return, unless you’re a Woodlands resident, of course. But given the wide variety on the menu, there could be hope yet in the seafood dishes (which I didn’t try). So give it a go, and let me know; my palate could’ve just been really particular that day.

Previous articleMajestic Bay: Crab In White Wine Sauce, Laksa Xiao Long Bao & More At Gardens By The Bay
Next articleFeast On Street Food & Shop Local From Over 50 Booths To Celebrate SG This 3 To 5 Aug At Suntec