Yam Mee Teochew Fishball Mee: One Of The Best Mee Pok In SG By 3rd-Gen Hawker Since 1970s In Kovan

I first heard of Yam Mee Teochew Fishball Mee from 26-year-old Anthea Tan, a third-generation hawker who was awarded S$10,000 thanks to the Tiger Street Food Support Fund in 2017.

She used that money to expand her family’s humble fishball mee stall—which was started by her grandfather in the 1970s—and opened the Yishun and Bedok outlets. The new outlets are handled by Anthea and her 25-year-old brother respectively. That’s on top of the original Kovan outlet, which her father still runs to date. As a university graduate myself, it’s really inspiring to hear of young individuals like Anthea who chose to help her parents in the hawker line rather than pursue a corporate career.

Heartened by Anthea’s story, I decided to drop by the original outlet at Kovan Market and Food Centre to try out the Tan family’s legendary fishball mee.

You won’t be able to miss the stall—it sits in the heart of the food centre and it’s the only hawker there to occupy two units. 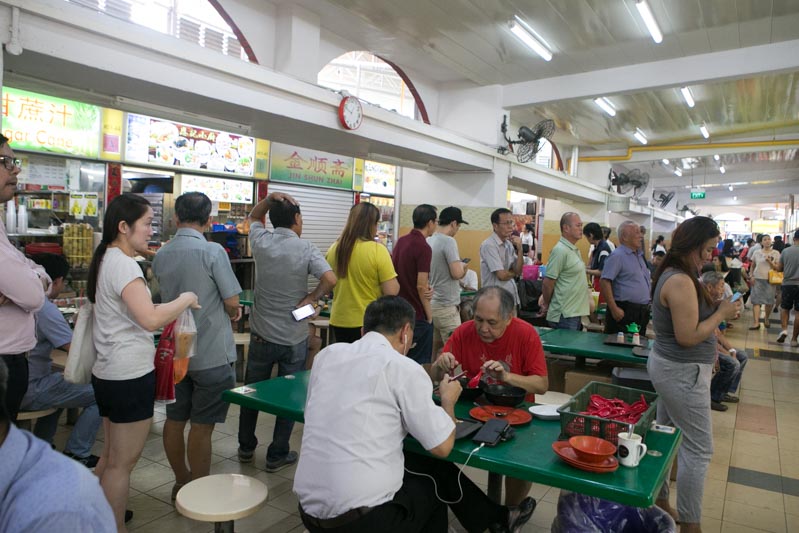 I took one look at its snaking queue and honestly, I died a little on the inside. When I was reading online reviews about this stall, I read that patrons waited an average of 30 to 45 minutes for their bowl of mee pok because they cook everything upon order.

I took a deep breath, readied myself, and started queuing. To my surprise, the queue moved along pretty quickly—I later found out it was because there were two aunties taking orders simultaneously—and I placed my order within 10 minutes. For starters, I got its Dry Fishball Noodles (S$4/small, S$5/big). We got the Big (S$5) bowl and asked for mee pok noodles, but you can also ask for other noodles, such as mee kia, mee tai mak, kway teow, yellow noodles, and more.

The first thing I noticed was how many ingredients they put in one single bowl—I spotted minced meat, lard, mushrooms, different types of fishballs, fish cake, spring onions, chilli, as well as a soy-based sauce. 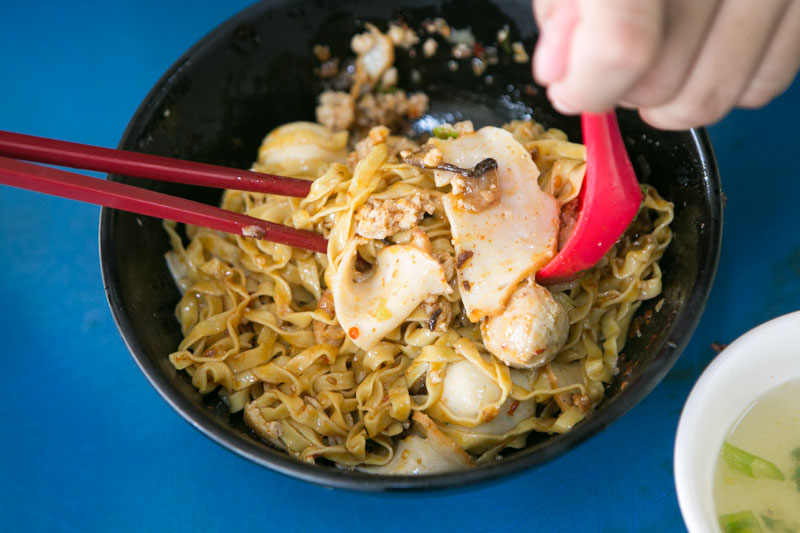 I took about 10 minutes to take some photographs, so by the time I actually got down to eating, the mee pok had already dried up and clumped together. I tossed in a couple spoonfuls of soup and started mixing eagerly. 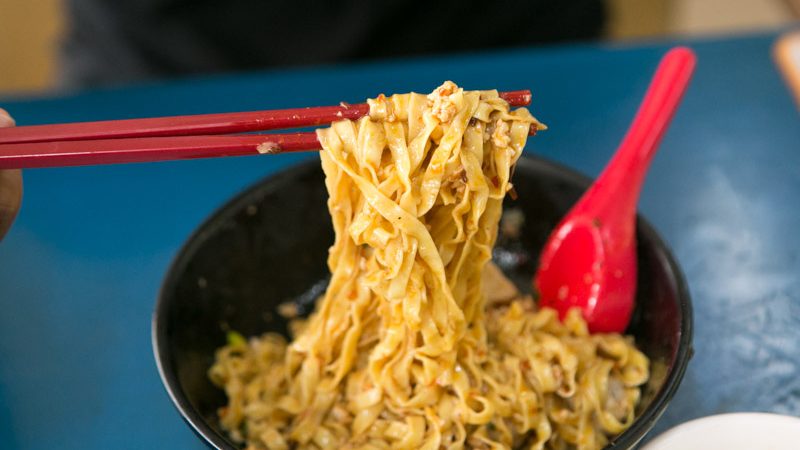 The sauce was excellently seasoned and I fought the instinct to wolf down my entire bowl of noodles instantly.

It was a silky mess of eggy goodness, with a full-bodied punch of savoury, peppery, and smoky flavours from the pork lard, chilli, spring onions, and other seasonings. There was just the right amount of sharp spiciness from the chilli to accompany the richness in flavours.

My only gripe would be that the sauce was a bit too thick and oily, and it quickly got jelak towards the end of my meal. 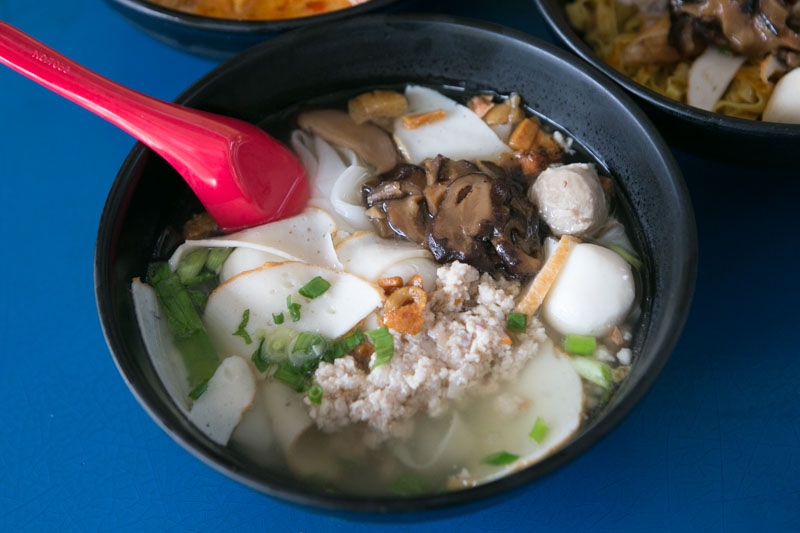 The soup was warm, comforting, and sweet, reminding me faintly of yong tau foo soup, where they’d boil the broth with yellow beans and ikan bilis to achieve that kind of full-bodied sweetness.

It was mildly briny, but the minty and refreshing taste from the spring onions helped to balance it out. The kway teow noodles were so thin and translucent that I could see through each noodle strand when I lifted them up!

While I don’t typically enjoy my noodles to be this thin or soft, I can understand the appeal—especially when paired with the comforting clear soup. It warmed and soothed my tummy, just like a home-cooked bowl of macaroni soup.

This would be perfect for rainy days, or for days when you’re simply craving something a little lighter. 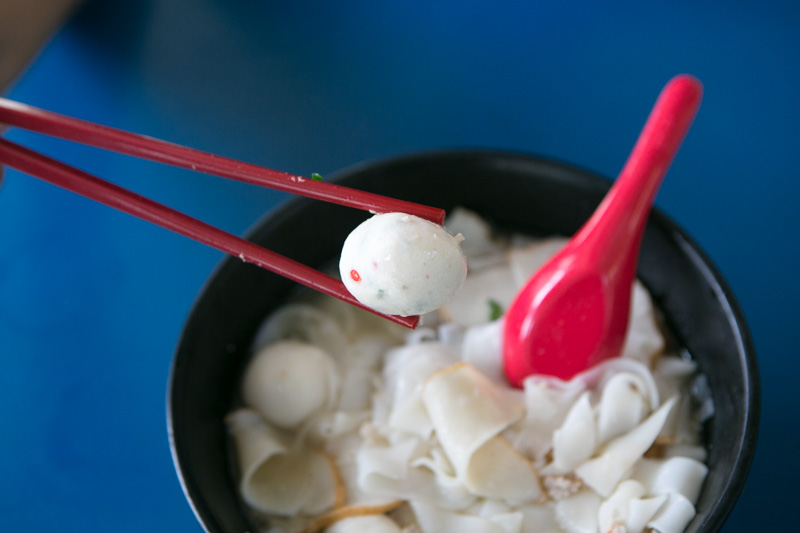 I was super impressed with Yam Mee’s fishballs—which are all handmade, by the way.

The fishball was taut and springy, the kind that’d burst in your mouth when you bite into it, and the meat was delightfully sweet. That was when I knew that the handmade fishballs used only the freshest fish meat. A major plus in my books! 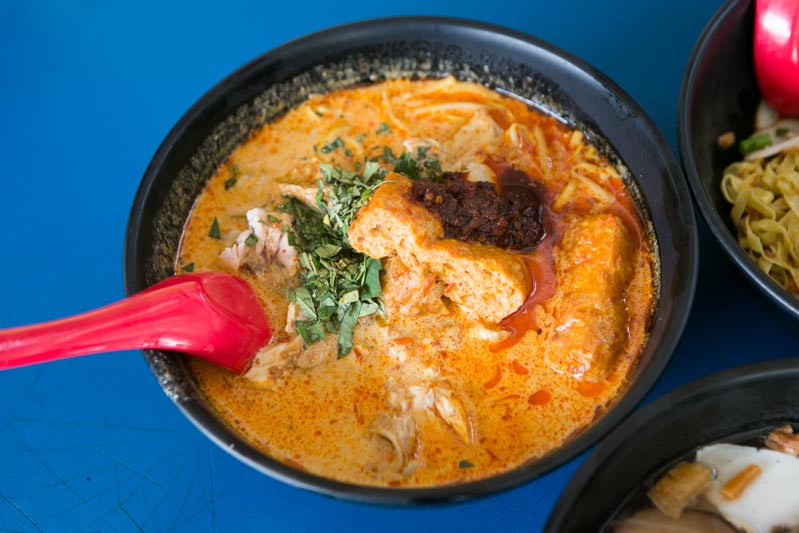 I was craving something savoury and spicy, so I tried Yam Mee’s Curry Chicken Noodles (S$4). 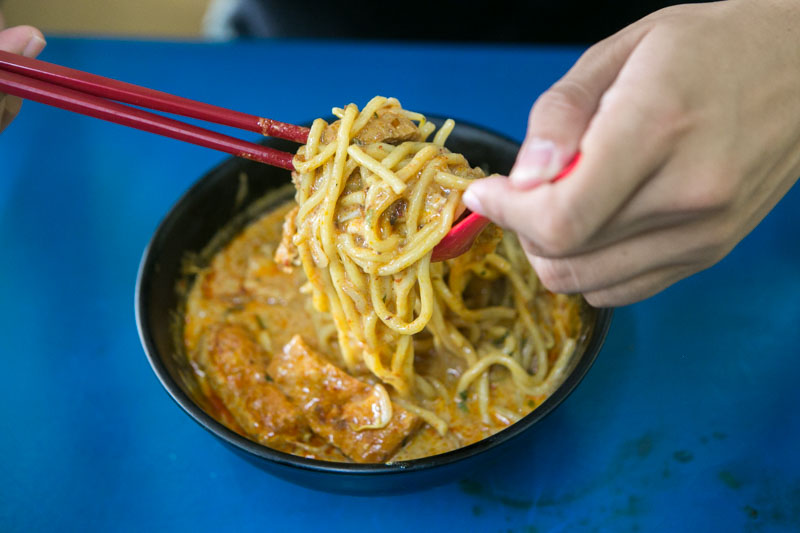 If I hadn’t placed the order myself, I’d have actually mistaken its curry chicken noodles for laksa.

All its components resembled laksa down to a tee: the curry broth was really thick and creamy, it was topped with chopped curry leaves, there was even tau pok, fishcakes, and a lethal-looking wad of chilli.

The only difference is the sliced chicken, which was hidden under the pile of yellow noodles and curry gravy. 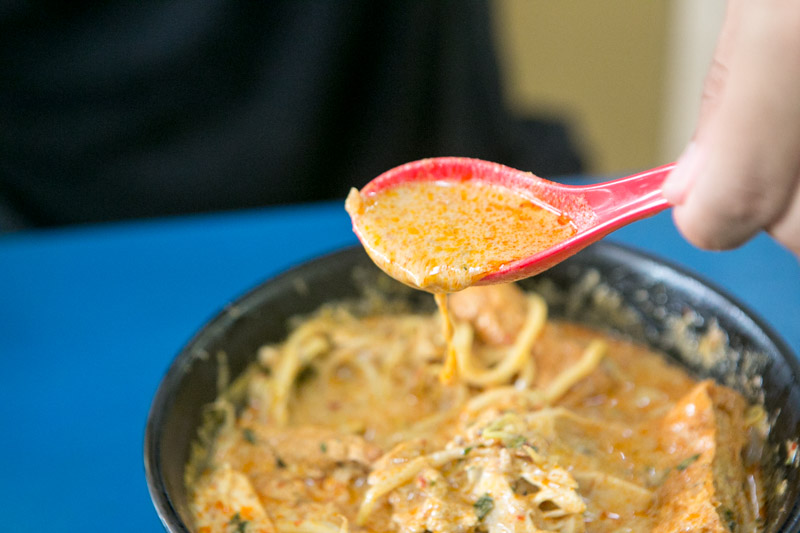 When I drank the curry gravy, the first thing that hit me was the spice. I immediately choked because I wasn’t expecting it, and spent the next couple minutes trying to catch my breath while dabbing tissue at my teary eyes.

However, the more I sipped on the gravy, the more I loved it. It was creamy, fragrant, and rich, and wasn’t entirely smooth, with plenty of spices, herbs, and ingredients to create a gritty texture. 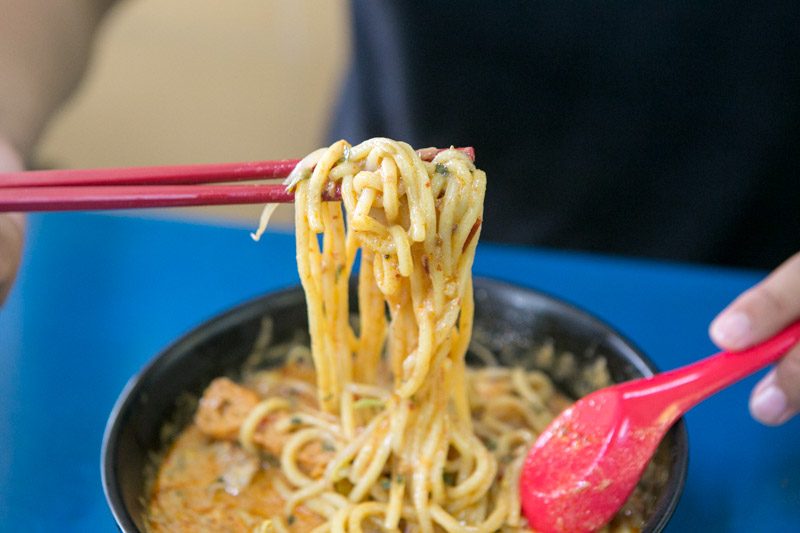 Most of the yellow noodles I’ve come across in curry chicken noodle dishes are plain and tasteless, and don’t go well together with the curry gravy at all. Yam Mee’s yellow noodles, on the other hand, were surprisingly tasty, soaking up the aromatic and thick curry gravy up like a sponge.

In fact, as I continued stirring my bowl of curry chicken noodles, I actually found it harder to lift up my noodles as time went by because they were soaking up the gravy so fast! I ended up ditching my spoon and started slurping the noodles up just by using my chopsticks. 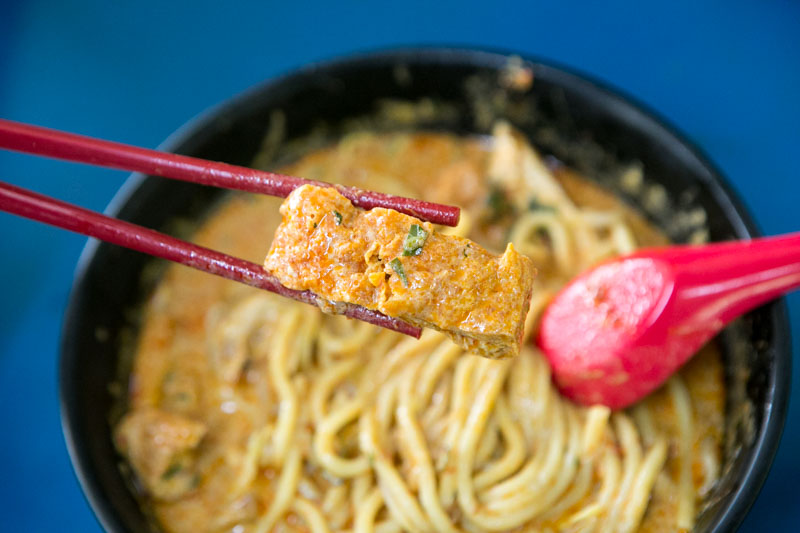 The tau pok was really solid. Literally. It was a huge block of firm tofu that had been deep fried and oddly enough, it didn’t soak up the curry gravy like other tau poks would. When I squeezed it with my chopsticks, I only managed to produce a few drops of curry gravy.

My dining companions and I puzzled over this anomaly for the longest time. Perhaps this was because the curry gravy was super thick. Or was it a case that the tau pok had been fried for a longer period of time?

Either way, I was slightly disappointed I didn’t get to indulge in those sponge-like tau poks that would sag from the weight of curry it had soaked up. 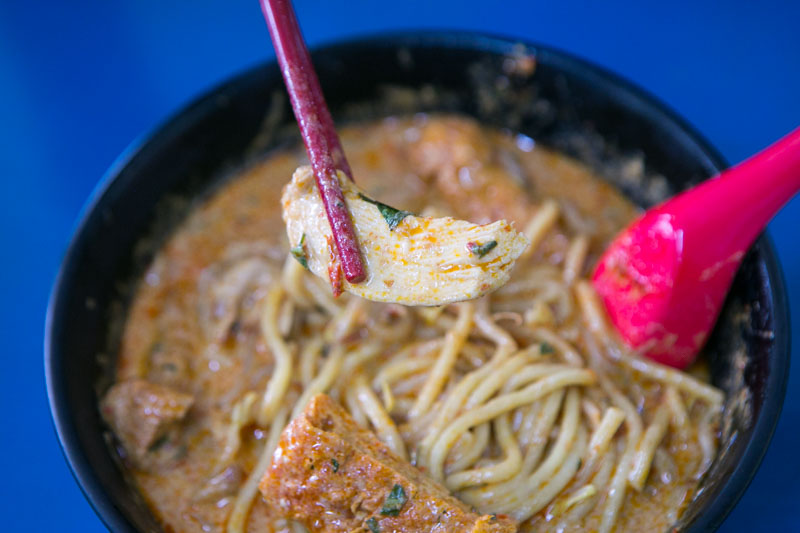 The chicken slices retained its firm texture despite being dunked in the curry gravy a couple of times, and when I bit into them, it was sweet, juicy, and fresh—everything a piece of chicken should be.

I only wish I had asked for boneless chicken meat because the bones had fallen into the gravy throughout the meal. On more than one occasion, I stumbled upon little pieces of bone when sipping on a spoonful of fragrant curry. Not exactly the most ideal situation.

For just S$4, I’d be more than willing to support Yam Mee Teochew Fishball Mee, especially after knowing how much effort the Tan family put into ensuring that its legacy lives on through its three hawker stalls. Plus, the portions are incredibly generous so you’d definitely get more bang for your buck.

Dropping by to support the Tan family? Get the Mee Pok (Dry). You can’t go wrong with the hearty punch of flavours, which go super well with the silky egg noodles.