As a Singaporean, I’m proud of our culture, our traditions and more importantly, our food. The local F&B scene has done an impeccable job in promoting iconic hawker dishes but when it comes to local desserts, it has somehow taken a back seat blending into the backdrop of our ever-buzzing and vibrant food scene.

Comparing to Instagram-worthy, over-the-top new-age desserts (which I very much appreciate from time to time), as an ’80s baby, I prefer soaking in the sense of nostalgia evoked by traditional local desserts. A bowl of green bean soup, icy cold cheng tng, and a mountain of ice kachang; these desserts have followed me since I was young, and until today, I often crave them just for comfort and familiarity.

Originated from China, tau huey or soya beancurd is a pudding made from semi-solidified soya bean milk. Traditionally, it can be consumed hot or cold and is served with sugar syrup. For a good bowl of tau huey that is smooth and silky, head to Selegie Soya Bean. Not only do they sell beancurd with different toppings, they also have a variety of dough fritters and muffins to complement your bowl of tau huey. 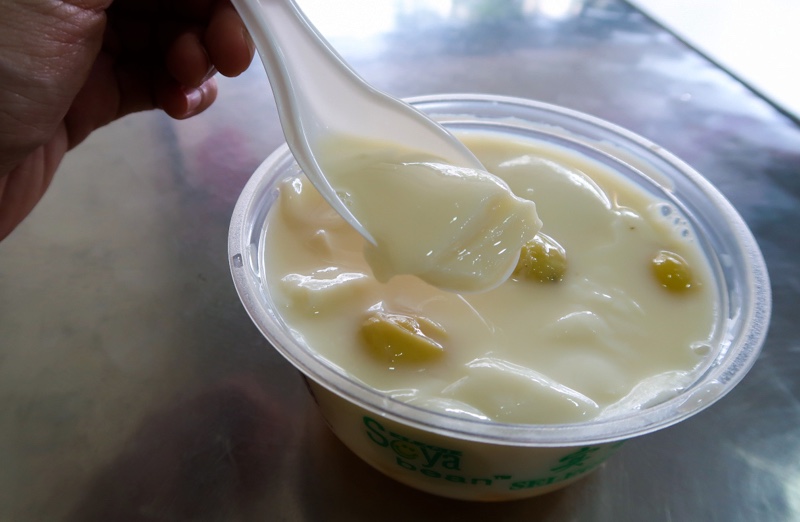 If you feel that the Classic Beancurd (S$1.40) is a little too boring, Beancurd With Ginkgo Nut (S$2.20) is the other must-try that I would highly recommend. The sweetened ginkgo added a nice bite and flavour that went hand-in-hand with the rich and milky soya beancurd, making for a delightful mid-day snack to keep you fuelled and energised.

A well-known dessert in Southeast Asia, chendol is an iced sweet dessert topped with fragrant neon green chendol strands, drizzled with gula melaka, usually accompanied by a side of red kidney beans and attap seeds. 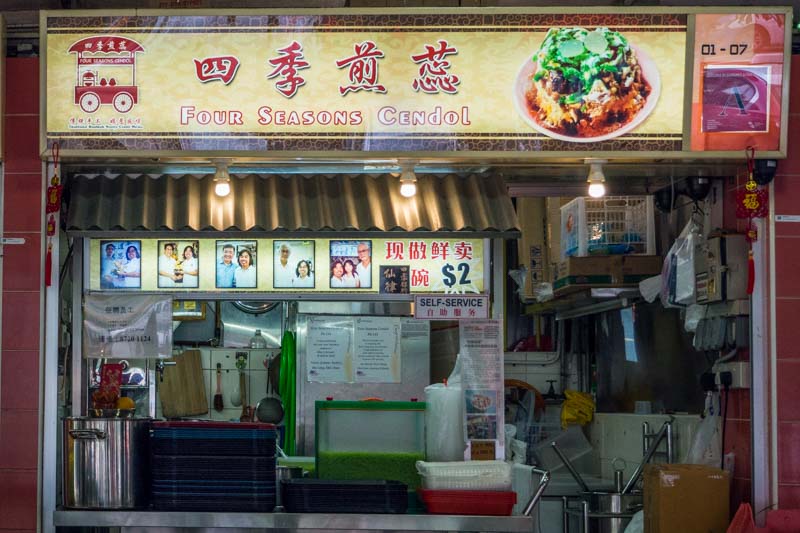 Bestowed with the title of being ‘The Best Chendol‘, Four Seasons Cendol at Toa Payoh is one of the stalls that I usually frequent when I’m around the area. 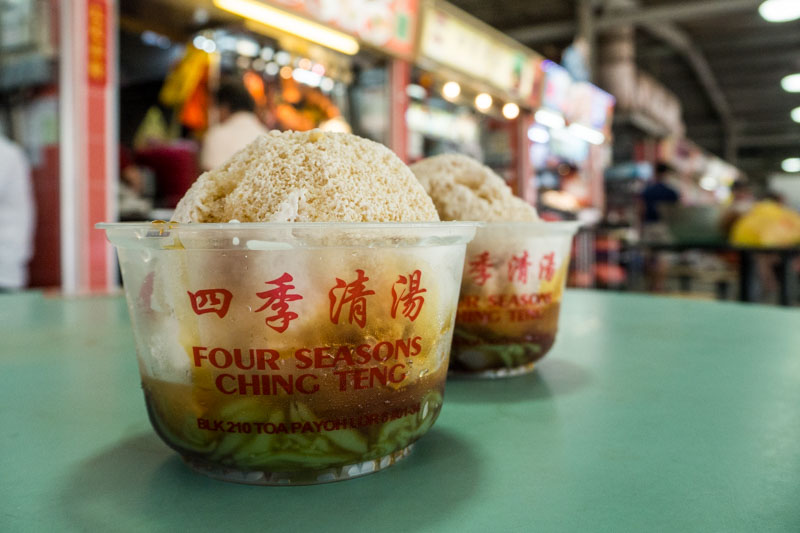 Shaped in an almost perfect sphere, Four Seasons Cendol (S$2.20)was doused in thick and creamy coconut milk before being drizzled with a ladle of sweet gula melaka syrup. Eaten together with the green jelly noodles that have been infused with a strong pandan taste, each mouthful was rich and flavourful. A great dessert to have on a warm, sunny day.

Looking for more chendol options? We have shortlisted 10 places for you to get your chendol fix depending on your preference!

As a kid, my mother would usually force me to down a cup of chin chow (grass jelly) whenever I get heaty or whenever she suspects I’m running a fever as grass jelly is known to be a cool remedy for fever and sore throat. Since then, I’ve always used heatiness as a reason to earn myself a cup of this refreshing drink or a bowl of this cooling jelly. 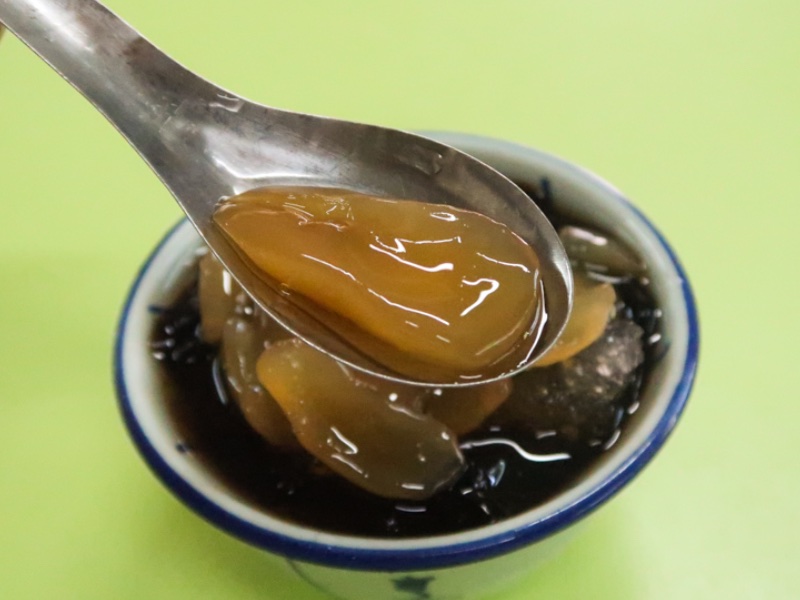 My favourite pairing to go with this herbal jelly has got to be Sea Coconut (S$2). The sweetness from the sugar syrup and the sea coconut balanced the slight bitterness of the grass jelly resulting in a refreshing and soothing dessert that kept me feeling cool inside and outside.

With Singapore’s hot and humid weather, what better traditional dessert is there than ice kachang to beat the heat? Originally made with only shaved ice and red beans, ice kachang has evolved with the times into a colourful concoction of syrups and ingredients. This icy treat can be found in almost all hawker centres in Singapore and if you frequent ABC Brickworks Market & Food Centre, I’m sure you have noticed Jin Jin Dessert. 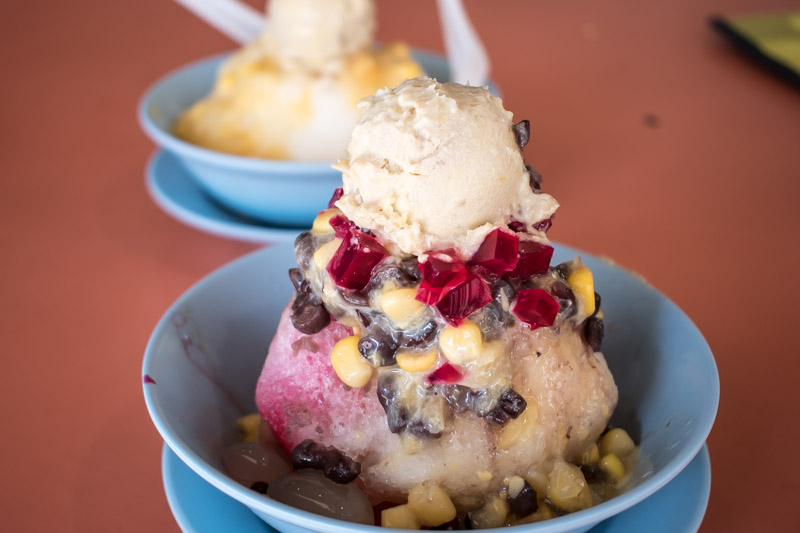 For durian lovers, forgo the regular ice kachang and opt for the Durian Ice Kachang (S$2.50) instead. Aside from the customary mountain of shaved ice drenched in bandung (rose syrup), condensed milk and topped with familiar toppings like corn, red beans, jelly and attap seeds (a must-have in all ice kachang), our bowl of Durian Ice Kachang was crowned with a scoop of D24 durian ice cream!

Literally translated as “clear soup” which sets it apart from other rich and creamy desserts such as ice kachang and chendol, cheng tng is a simple and light dessert perfect when eaten hot or cold.

This humble dessert might seem easy to prepare. However, a good bowl of cheng tng requires each ingredient to be prepared meticulously before combining them into the sweet longan soup, which is exactly what No Name Dessert located at Bedok South is all about.

Besides its affordability (S$1.70 for a bowl of cheng tng), No Name Dessert is also very generous with their ingredients. Consisting of dried longans, white fungus, gingko nuts, dried persimmon, candied winter-melon, sago balls and sweet potato, the cheng tng was filled with an array of textures and was extremely flavourful. The longan soup was also not overly sweet, making it a suitable dessert for young and old to enjoy.

Growing up in a Teochew family, I was introduced to orh nee (yam paste) at a relatively young age and it has been my favourite hot dessert ever since.

However, unlike other Chinese desserts like cheng tng, green bean soup and sweet potato soup, this luscious dessert was not something I had often probably due to its complex preparation process. Thus, I’ve always seen orh nee as a dessert meant for special occasions such as wedding banquets. 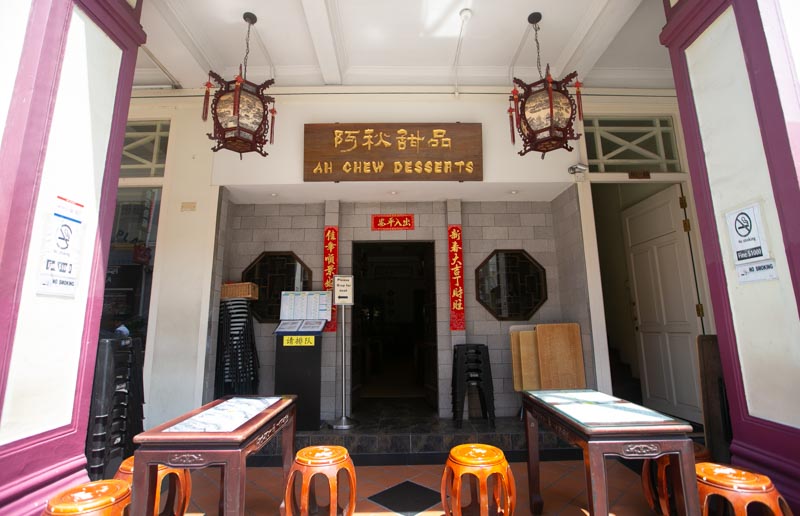 When it comes to orh nee, I somehow prefer them plain and simple. A taro base with some gingko nuts mixed in just like how they serve it at Ah Chew Desserts. Located at Bugis, the Yam Paste With Gingko (S$3.30) at Ah Chew Dessert, was the ideal thick creamy consistency, with bits of yam in the paste, giving the bowl of orh nee a nice bite. 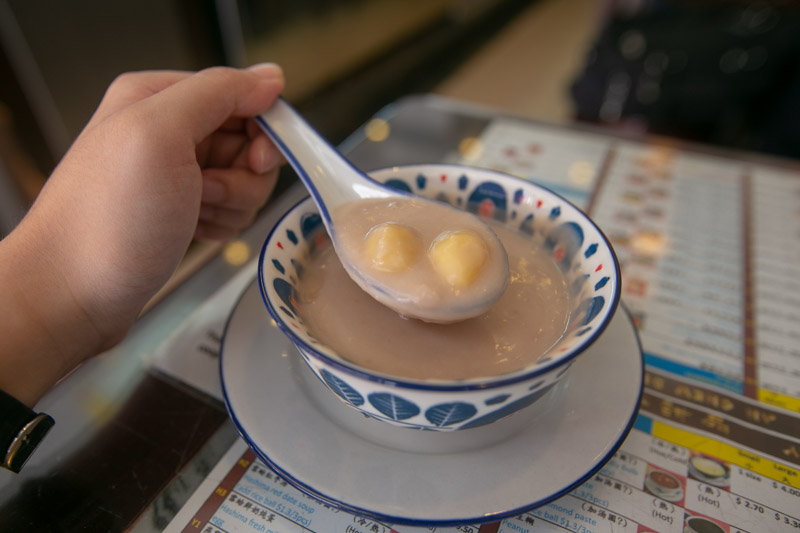 The gingko nuts were soft and slightly sweetened as it was first cooked in sugar syrup before adding in the yam paste. Despite not having shallot oil or lard in the mix, the paste was still fragrant and filled with natural sweetness and earthy flavours from the yam.

Originated from Indonesia, pulut hitam is sweetened black glutinous rice porridge with coconut milk that many Singaporeans enjoy for its nutty and rich flavours. Popular especially amongst the older generations, pulut hitam is also thought to be a healthy snack as black glutinous rice is high in antioxidants which lower the risk of heart diseases. 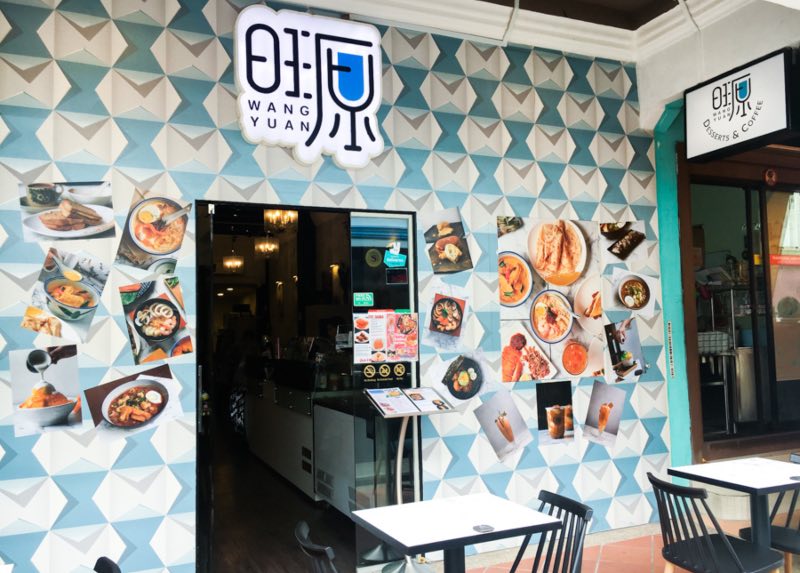 For a bowl of pulut hitam that evokes feelings of warmth and comfort, try Wang Yuan Cafe’s Bur Bur Pulut Hitam (S$4.80). The black glutinous rice was dry-roasted before cooking, intensifying the mild and nutty flavour of the dessert. Although this bowl of Bur Bur Pulut Hitam is not as thick as the regular ones we often get in hawker centres, its flavours were still strong and intense, making this bowl of pulut hitam very addictive.

Commonly eaten during Dong Zhi (Winter Solstice) Festival, ah balling are glutinous rice balls traditionally filled with ground peanut, black sesame seeds or red beans. This simple yet satisfying combination of chewy rice balls and warm soup is a great mid-day snack, able to keep us feeling full and warms us up from our bellies. 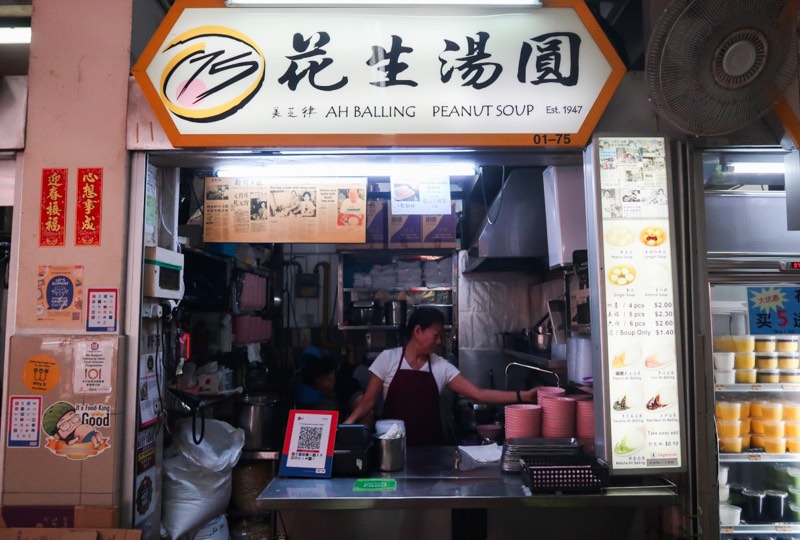 Today, ah ballings are no longer restricted to its traditional flavours. Many stalls have introduced new fillings and soup flavours in order to attract new customs and keep regulars returning. One hawker that managed to do this really well is 75 Ah Balling, which has been serving this traditional treat since 1947. 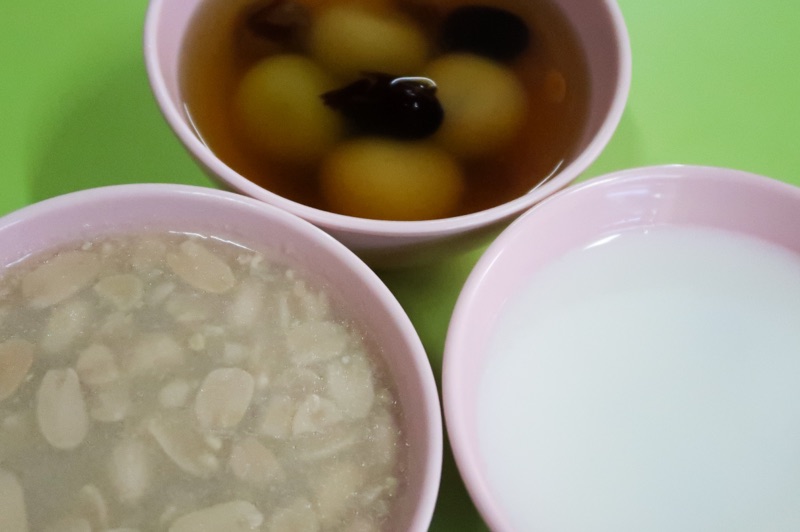 Helmed by its third-generation owner, Mr Alvin Aw (grandson of 75 Ah Bailing’s original owner) and his wife, 75 Ah Balling sells these glutinous rice balls in six different fillings, with four soup choices. Not only that, but customers also have the choice of fillings they want in their soup, making every bowl of ah balling wholly customisable. 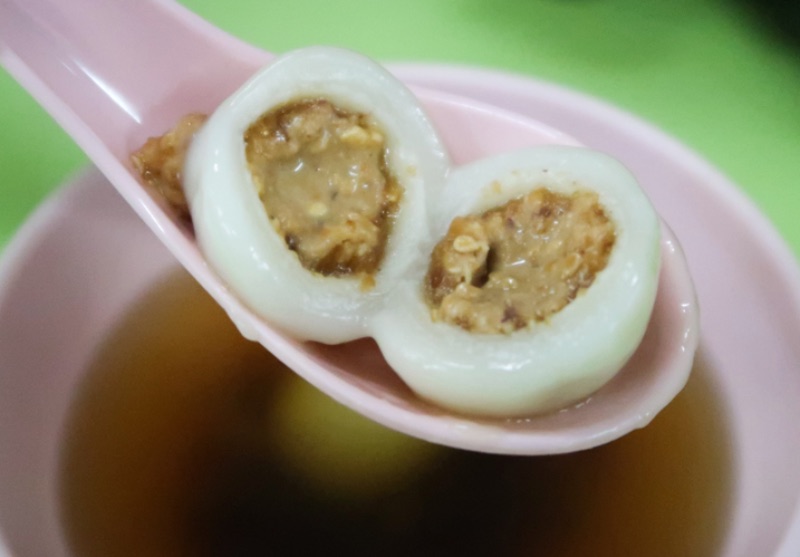 My favourite has got to be the ground peanut and black sesame filling ah balling in peanut soup (S$2 for four, S$2.30 for five, S$2.60 for six). The glutinous rice skin of 75 Ah Baling was thin, and the balls were fully filled with ingredients. The peanut soup features whole peanuts which were boiled till soft and delicate, resulting in a whole level of fragrance and nuttiness in which I truly enjoyed.

Tau suan which is essentially split mung bean soup is a traditional dessert that is believed to aid the body in reducing heatiness. Whilst some might be crazily in love with this dessert, others might find its starchy texture a little unusual and off-putting. 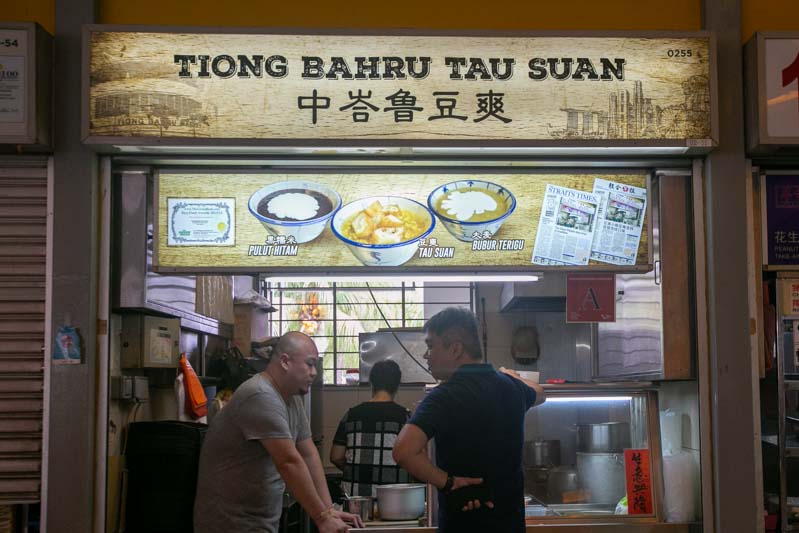 When it comes to tau suan, my favourite stall to get a bowl of this warm and comforting dessert is definitely Tiong Bahru Tau Suan located at Tiong Bahru Market. Many people might think of this as just a dessert, however, with its high nutrition factor, Tau Suan (S$2) can also be eaten during breakfast, giving us a boost for the day. Topped with pieces of freshly fried you tiao (dough fritters), Tiong Bahru Tau Suan is suitable for both young and old as it is not too sweet in flavour. The mung beans can be tasted separately as they are not completely mashed up in the soup, giving a nice fragrance and bite to the starchy concoction.

Ice cream is an international dessert that can be found anywhere and everywhere. But when a rectangular slab of ice cream is sandwiched between a rainbow bread, it instantly becomes a dessert that truly represents Singapore.

They usually come in a variety of flavours ranging from the regular Chocolate, Strawberry and Vanilla to exotic Asian flavours like Sweet Corn, Durian and Red Bean.

Since young, my go-to flavour has always been Raspberry Ripple. The plain vanilla ice cream matches perfectly with the sweet and slightly sourish raspberry sauce. What I particularly enjoy about this dessert is how the bread acts as a sponge-like vessel soaking up every bit of the melted ice cream resulting in a delightful treat that is sure to bring happiness any time of the day.

We are just touching the tip of the iceberg as this list of traditional local desserts can go on and on.

With that said, it is definitely nice to take time to appreciate and learn a little bit more about these old school desserts that once delighted our pioneers and older generations!