I’ve noticed the rise of all-day dining spots and its value to hungry crowds who need food from the very start of their work day till they knock off.

They serve as one-stop establishments that serve everything from breakfast to lunch to dinner and drinks, to sometimes, even supper bites. 51 Soho is a new entrant to the Telok Ayer neighbourhood, a place that hopes to bring the community together with its delectable menu and social space. They’re even fitted with high-speed Wi-Fi — perfect for those who wish to grab a bite while juggling the demands of their job. 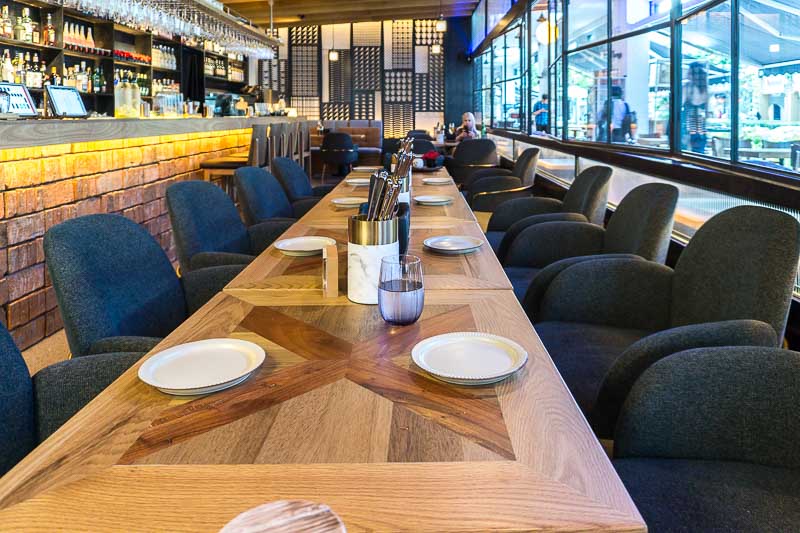 The layout indoors is rather narrow and long, probably more suited for intimate dinners over a tipple or two. 51 Soho’s al fresco dining area allows for natural light, soft breeze and a laid-back venue for one to grub and network.

As their menu caters to all hours of the day, it’s tough to put a label on their cuisine, although it’s steeped in Asian influences. 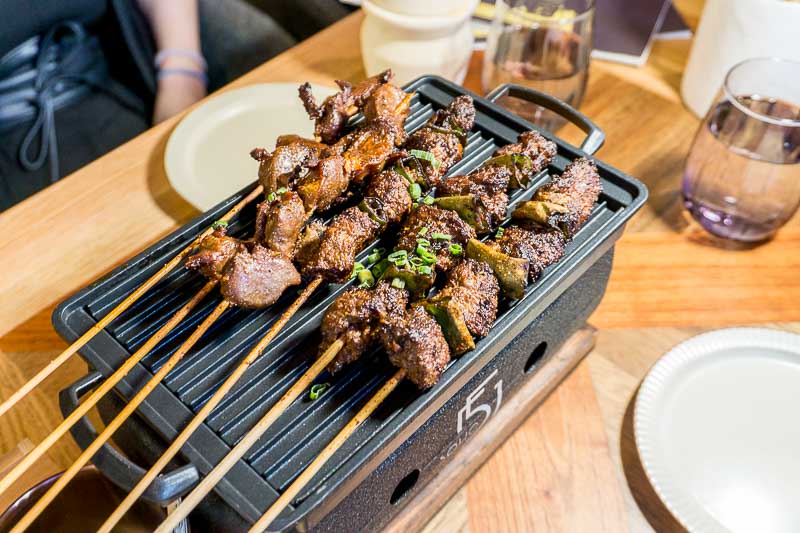 They have a lean selection of skewers, and I started with the Pork Belly (S$7.50 per pair) first. I believe it’s hard to mess up pork belly, however, this one missed the mark in my books. It didn’t have sufficient fattiness for me to warrant a recommendation.

We also tried the Duck Gizzard (S$6 per pair) which proved to be understandably gamey and more suited to those who enjoy their innards. 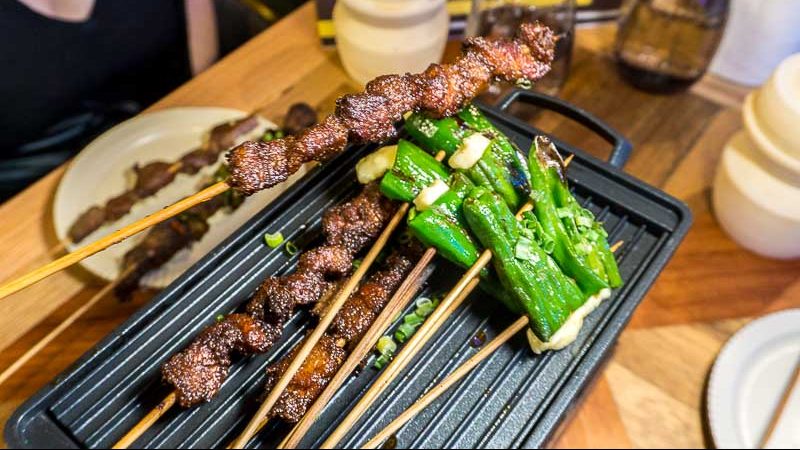 We thought we would things up with Padron Pepper With Halloumi Cheese (S$8 per pair), but it failed to excite our taste buds. The touch of halloumi cheese made it all worth it, though.

We also tried the Beef (S$11 per pair). The chunks were well-marinated and had an acceptable char to them. I liked how tender they were, and I could imagine that they’d serve as the perfect mid-afternoon snack. 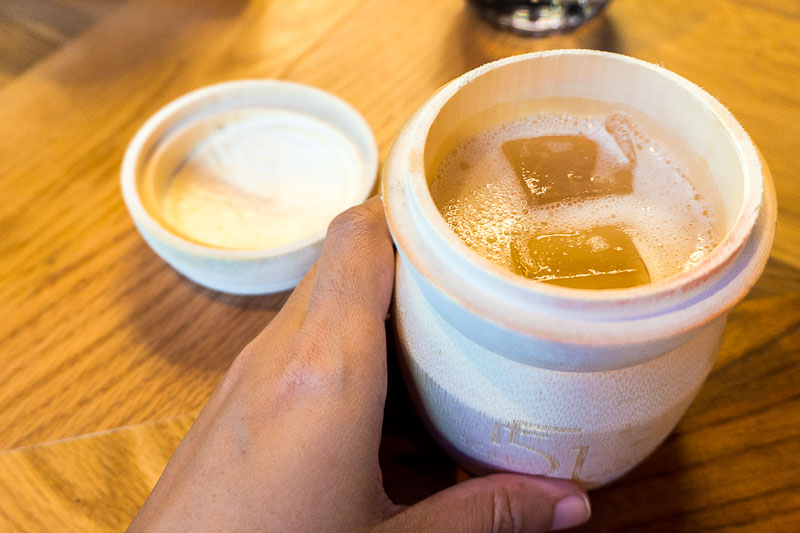 We tried some of their drinks throughout the night, starting with Bamboo Dream (S$88 for nine cups, S$100 for 12 cups). 51 Soho serves their signature cocktails here a bit differently —it’s priced as a tray of nine or 12 cups, making it a great deal if you’re coming here with a large group of friends.

Made with sweet fermented rice, osmanthus oolong tea, yuzu, vanilla and passionfruit, this cocktail went down very easily and served as a very refreshing drink to start the evening. We unanimously agreed that we could’ve easily drunk two or three portions. Visually, this vegetable dish doesn’t look appealing, but one mouthful and the whole table almost instantly changed their views. The Green & Nutty (S$18) is made with broccoli slaw, sorghum, spring
onion pesto, roasted nuts, and raisins. This is a dish I bet even finicky kids would take a liking to!

It didn’t have that expected “green” taste, instead, it was sweet and nutty. It’s all thanks to the addition of raisins as well as the clever use of pesto, to distract one’s taste buds. 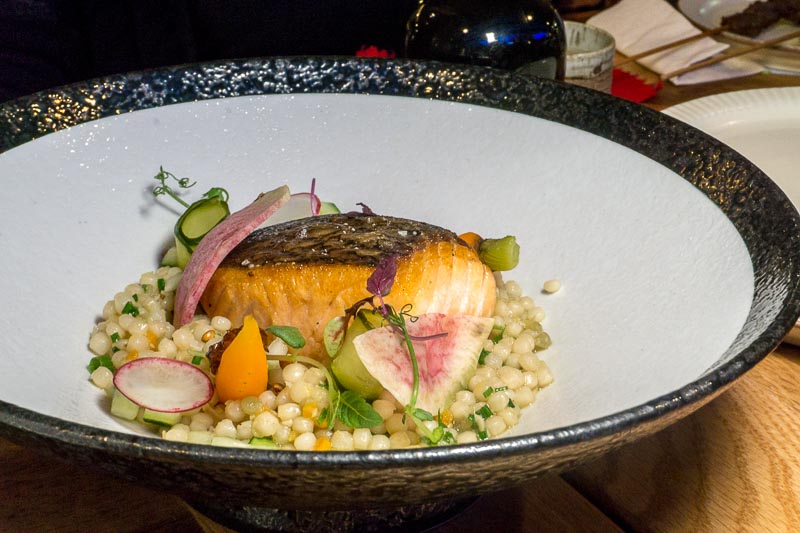 One of the more memorable dishes is Salmon & Pearl (S$28). A succulent piece of salmon rested on a bed of sour vegetable pearl couscous, diced cucumber, pickled cucumber, and popped buckwheat. 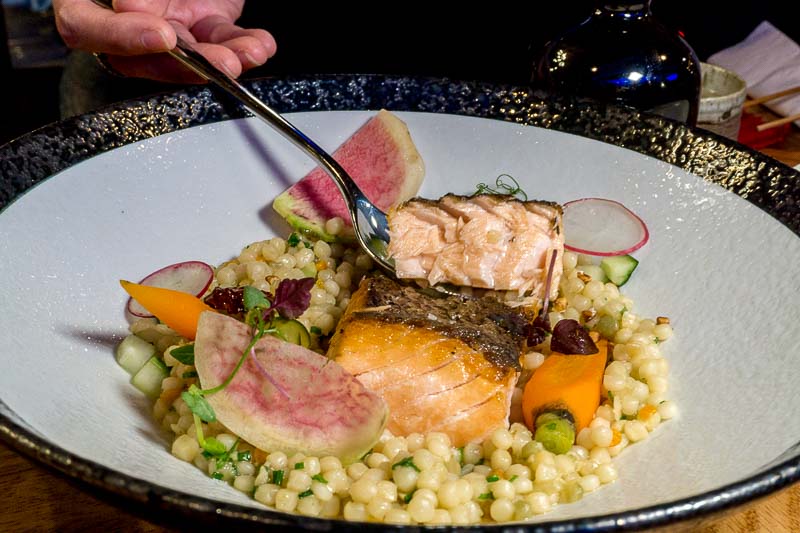 The texture of the couscous leaned more towards barley than the usual grittiness, and that really complemented the silky, flaky meat of the salmon. The dish on a whole was quite umami, and even non-seafood lovers will enjoy this dish. 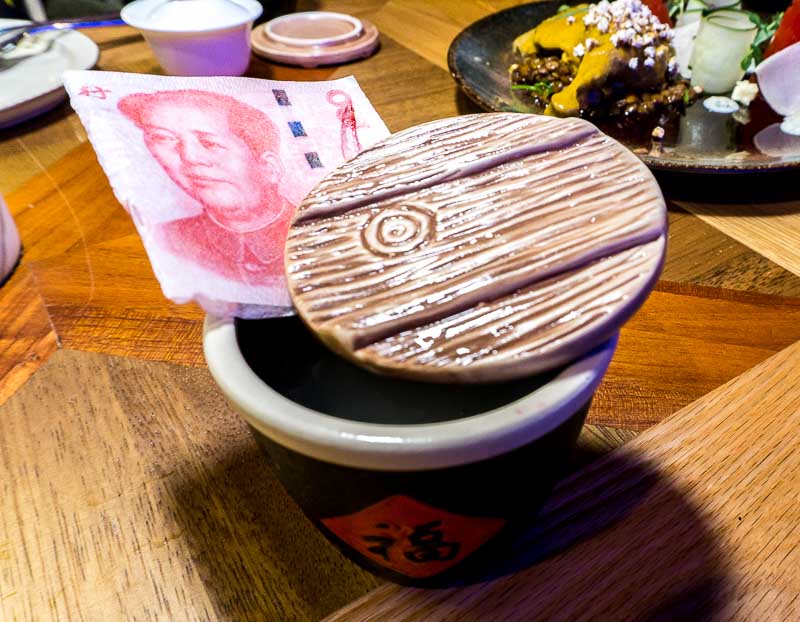 One of the more unique drinks of the evening was the Prosperity Cup (S$88 for nine cups, S$100 for 12 cups). The drink is made with Chinese rice wine, rock melon, and chocolate but what really tickled us was the edible CNY100 (made of rice paper). Having no taste to it at all, it serves as a novelty more than anything, while the drink was mellow with a bittersweet finish. 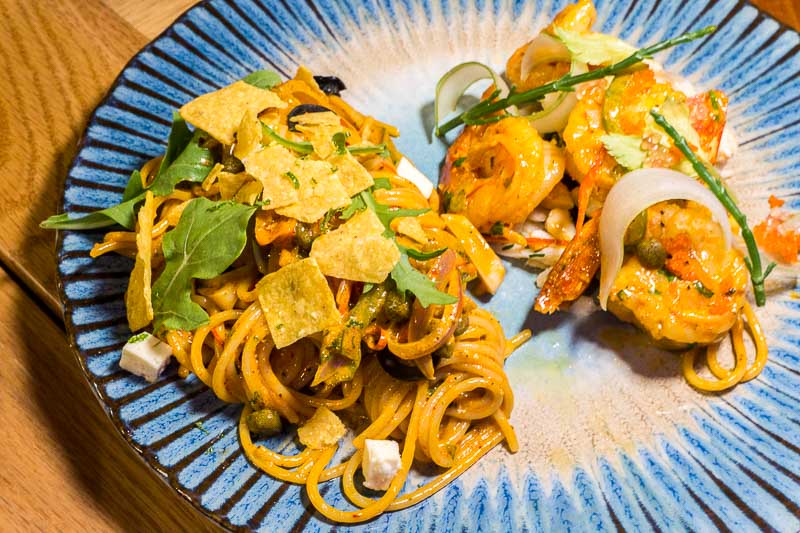 My favourite of the evening has to be Our Spicy Pasta (S$24). It’s essentially East-meets-West as it features hot and sour spaghetti with crab meat, tiger prawn, ebiko and tomato confit. The tanginess was undeniable, and the spiciness was truly addictive for those who love food that packs a punch. The homemade sauce has a mixture of Sichuan 六婆 (Liu Po), 老干妈 (Lao Gan Ma) and 豆瓣酱 (Dou Ban Jiang). The prawns were fresh and bouncy, and although my tongue was tingling, I couldn’t stop going back for more.

I actually returned again recently to have this very same dish, and it was spicier than when I first enjoyed it! I was informed that the recipe had been adjusted and now it’s fiercer than ever. So be warned if you’re someone who can’t handle spicy food. 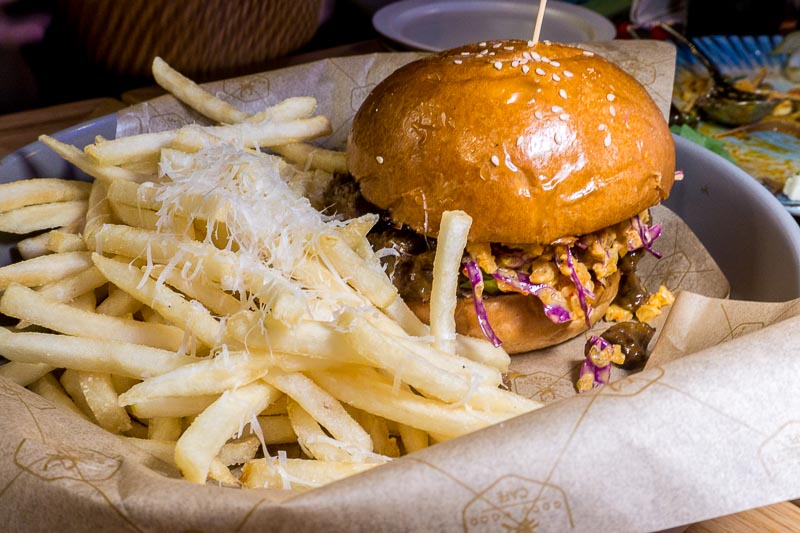 The Soho Burger (S$28) was absolutely scrumptious, as it was a powerhouse of textures. Loaded with house-made pulled beef, kimchi slaw and shoestring fries seasoned with salt and chives, I bet you wouldn’t be able to put this burger down once you’ve had a taste. It may look like a mess, but trust me when I say that it’s worth it. Because the patty is made with wagyu cheek, the flesh tore apart effortlessly and was pickled beautifully by the kimchi slaw.

I love brioche, with its fundamental soft and buttery texture, so having it as a bun really helped bring the burger together in one irresistible package. 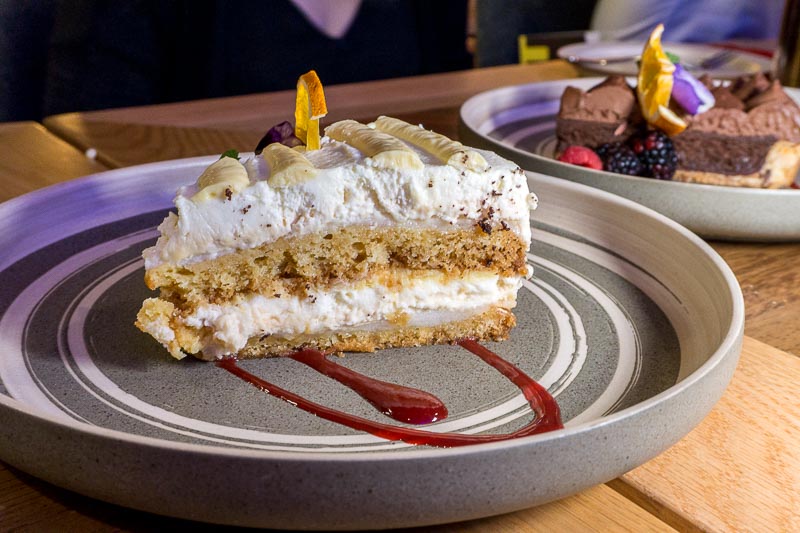 There’s always room for dessert, so I was very happy to hear we’d be getting a sample of almost all the desserts on the menu. Out of all five we tried, I had two top picks, one of which was the Passionfruit Meringue (S$12.90).

Sour fruits (or foods in general) aren’t my favourite, so I was apprehensive about how I’d take to this. I was pleasantly surprised to find the sweet-sour balance was on point, and I especially loved the contrast between the soft custard layers and the crumbly meringue. 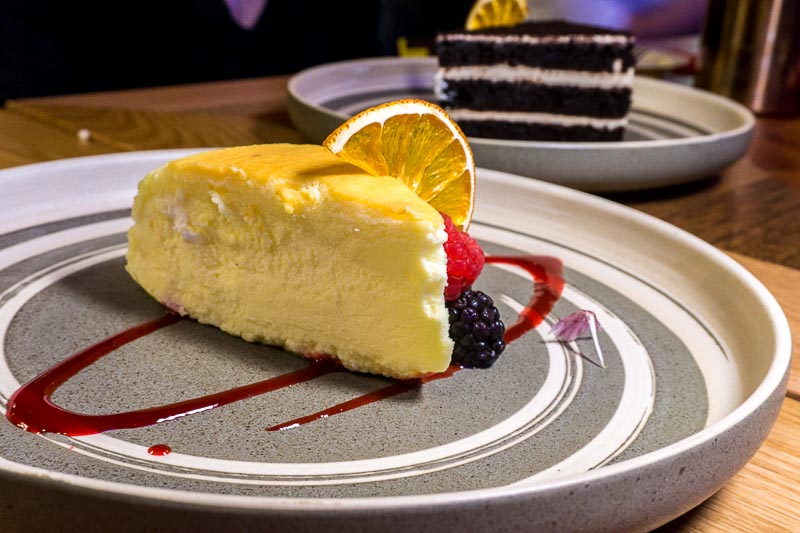 The other winner was the Cotton Cheese Cake (S$12.90). Much like Japanese cheesecake, this one was pillowy and airy. It felt almost like a slightly denser version of soufflé.

The cheese flavour was very mild, and before I knew it, the entire cake was gone.

It’s rare to have me return to a place that I’d already visited for work, so for me to have already gone back once especially for the pasta means 51 Soho comes highly recommended.

Even though 51 Soho’s menu varies throughout the day, and it doesn’t adhere to the rules of a specific cuisine, all its dishes were very well-executed.

So, should you come here? That’s a resounding ‘yes’ from me.

Previous articleBaan Khun Nai: Authentic Thai Dishes Under S$10 With Free Tom Yum Soup In Novena
Next articleUltimate Dining Guide To Mother’s Day 2019: 24 Places To Treat Your Mum This 12 May JAAN: Experience Flavours Of Devon (England) In The New Spring 2018...