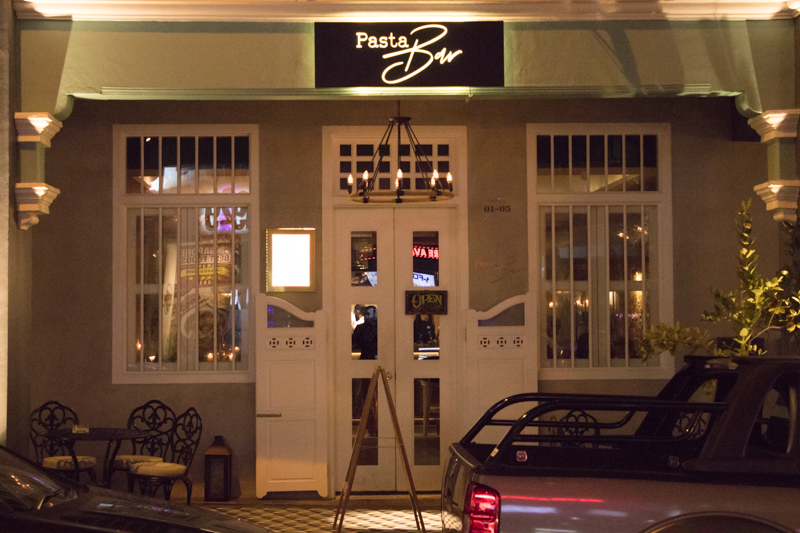 Located in the hipster neighbourhood of Keong Saik Road, Pasta Bar is a new restaurant with a relaxed dining experience. The open concept kitchen and 18-seater bar counter mean that diners can watch the chef cook up their pasta.

The restaurant is helmed by Chef Alessandro Giustetti who was born in Genova, so you know you are in good hands when it comes to pasta. 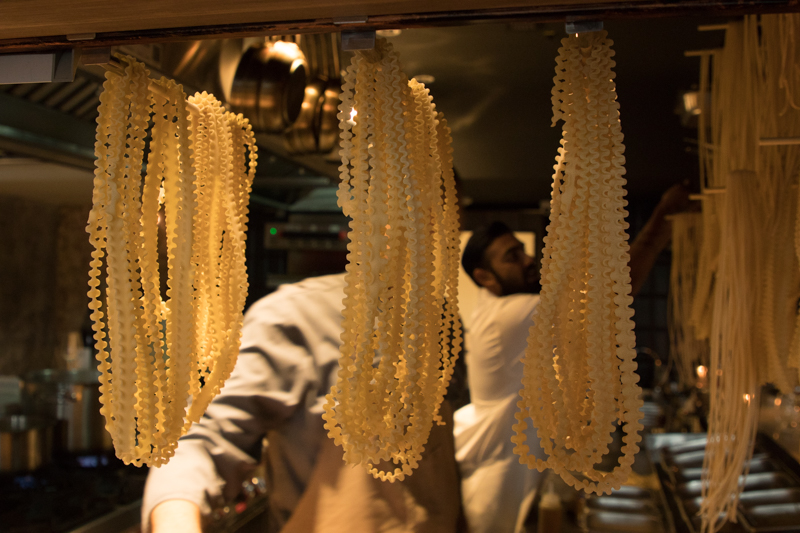 Pasta Bar was slightly hard to find as the entrance was hidden, and the restaurant was dimly lit with Italian music playing in the background.

Most of the seats in the restaurant were bar seats, so it was slightly cramped and not exactly the most comfortable. Not letting that get in the way of my food, I started off with a Veal Tongue (S$24++), a tender and succulent meat dish. The slight char on the crust of the veal tongue added a smoky flavour to the deep gamey meat. 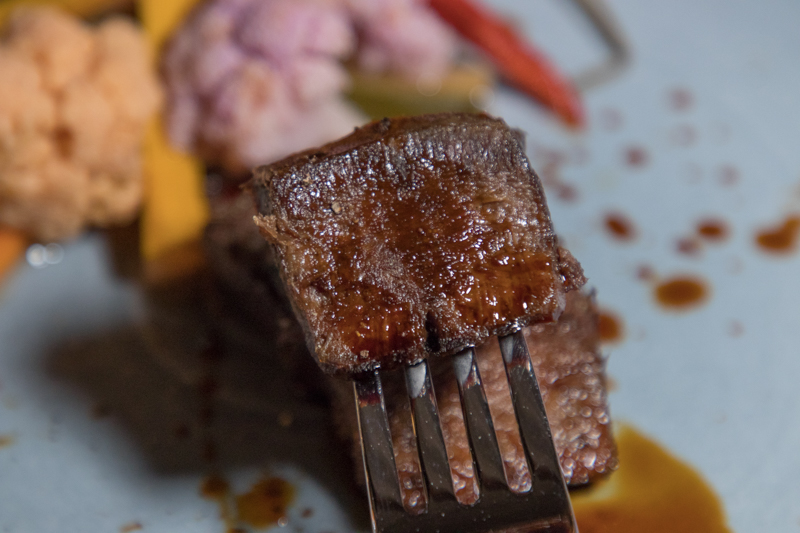 The dish comes with a side of pickled vegetables, which helped to cut through the gaminess of the meat and added a refreshing crunch to the dish. 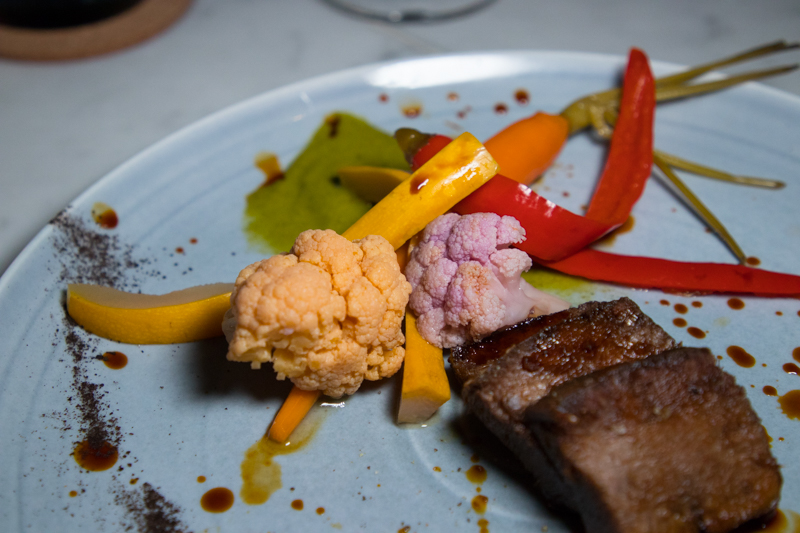 However, I still felt that the veal tongue was overwhelmingly gamey even with the pickled vegetables, and I wasn’t too fond of it. 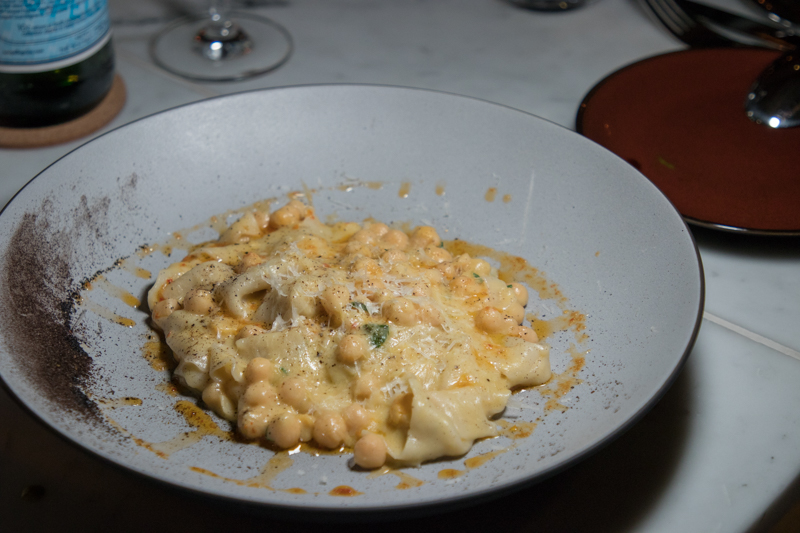 Moving onto the homemade pasta, I went for the Lagane (S$28++). According to the chef, this is the oldest recorded pasta recipe and it did not have any eggs in them. 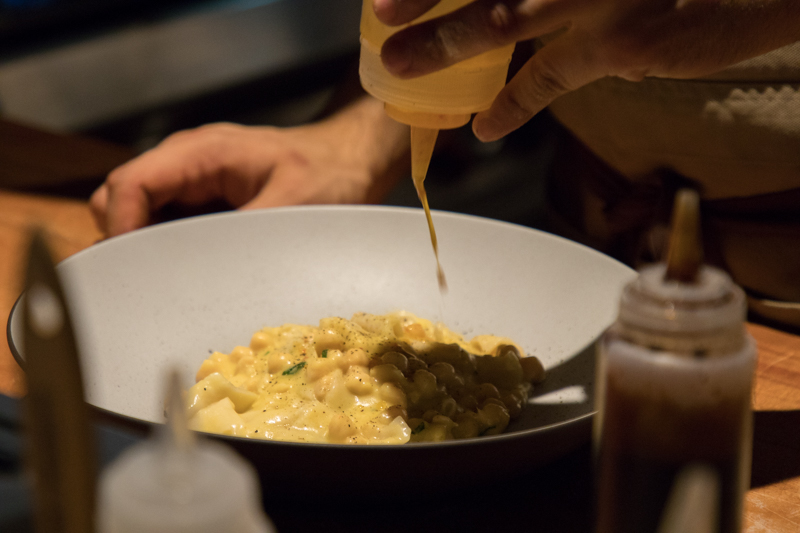 Topped with loads of chickpeas, this pasta dish was drizzled with spicy garlic oil. The pasta was silky smooth and soft almost like the thick kway teows we have at coffee shops. 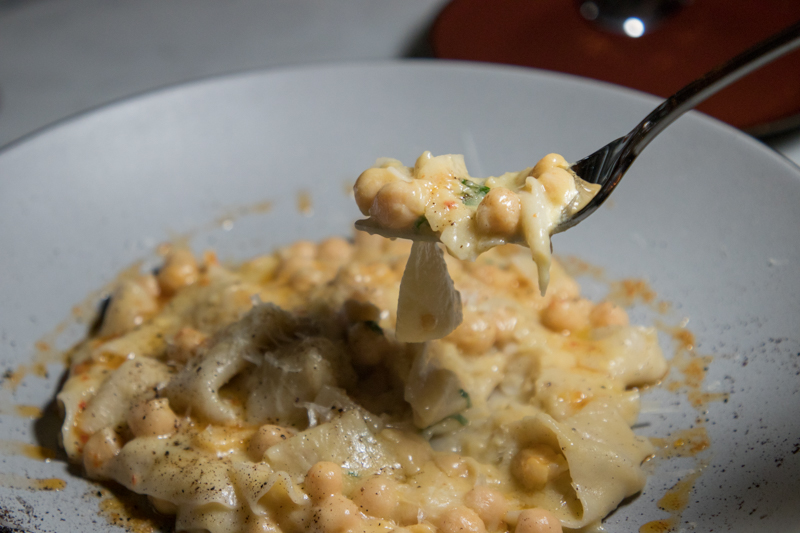 The chilli garlic oil added a fragrant aroma and a very subtle hint of spiciness in every bite. The dish was quite mushy, because the chickpeas were boiled until soft.

I liked how the mild cream sauce helped to bring the flavours together with its buttery taste. I had hoped that the pasta would be al dente, but unfortunately, that wasn’t the case. Every bite of the dish just had a mushy texture.

This is a vegan option since the dish doesn’t contain any eggs. 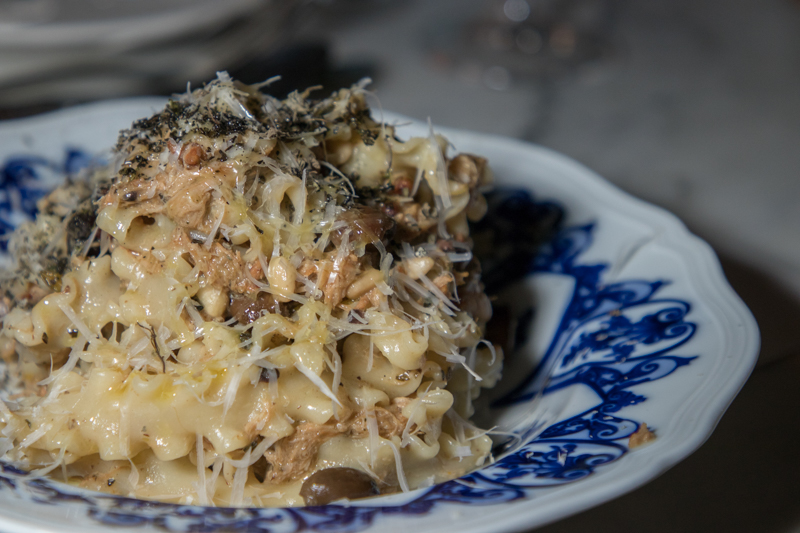 If vegan dishes aren’t for you, try the meatier Reginette (S$30), which is flat pasta with a wavy curl.

The earthy flavour of mushrooms hit my tastebuds first, followed by the creamy sauce. I liked how the pine nuts elevated the dish by giving a crunch to every bite. 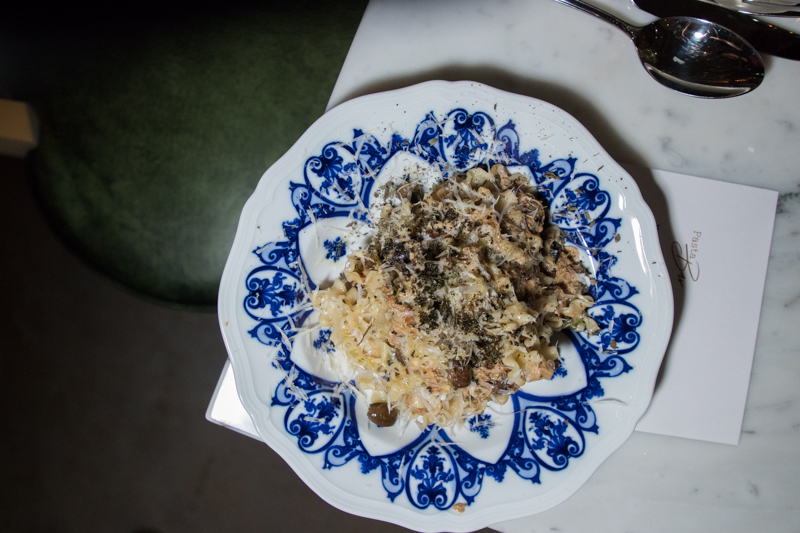 For the adventurous foodies, you won’t want to miss out on the rabbit meat in this dish.

I really appreciated that the rabbit meat was shredded to ensure it doesn’t dry out and maintains its juiciness. While it was slightly gamey, I could taste prominent rosemary notes which gave the dish another layer of flavour. 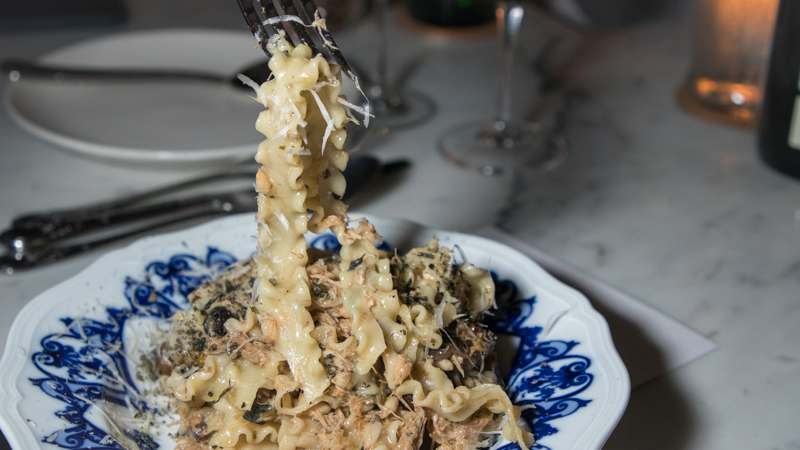 Cooked al dente, the pasta had a slightly chewy bite. I liked how the shape of the pasta allowed for the ingredients of the dish to be easily picked up and eaten in one mouthful. However, with that said, I felt that the dish fell short in delivering different layers of flavour. I could only mostly taste the salty cream sauce that masked the subtle sweetness of the rabbit meat. 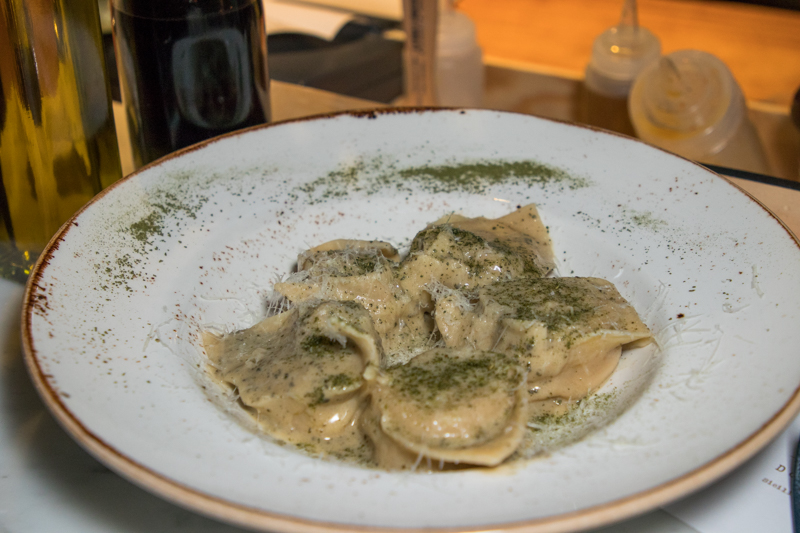 Next was the Tortelli (S$30++) which was like a ravioli and packed with a pumpkin puree. A bite of this large dumpling-like pasta made the pumpkin puree ooze out, delivering a natural burst of sweetness. 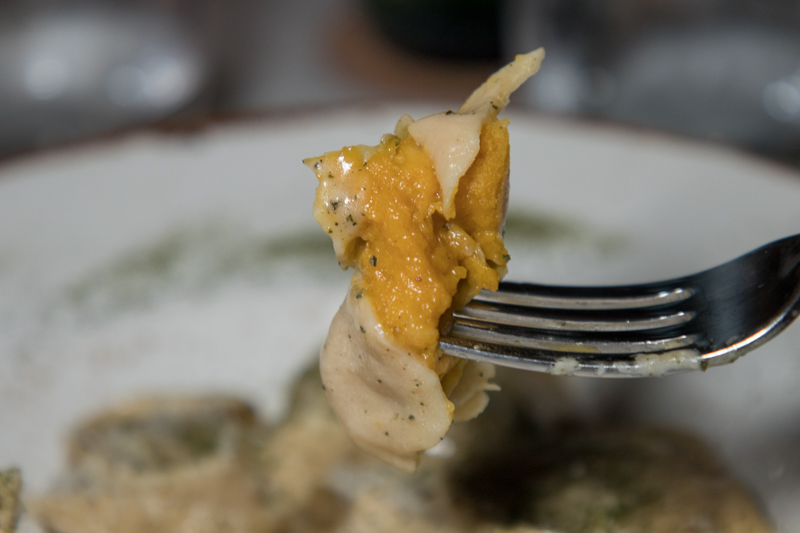 The generous portion of pumpkin had leafy and earthy notes too. The dish was drenched in a sage butter sauce which smoothened out the flavours of the tortelli and gave a slightly nutty kick to the dish. However, I felt that the skin of the pasta was slightly too thick, especially around the folds, and made it too chewy.

Of course, the thick pasta skin might be needed to prevent the substantial amount of puree from leaking out. 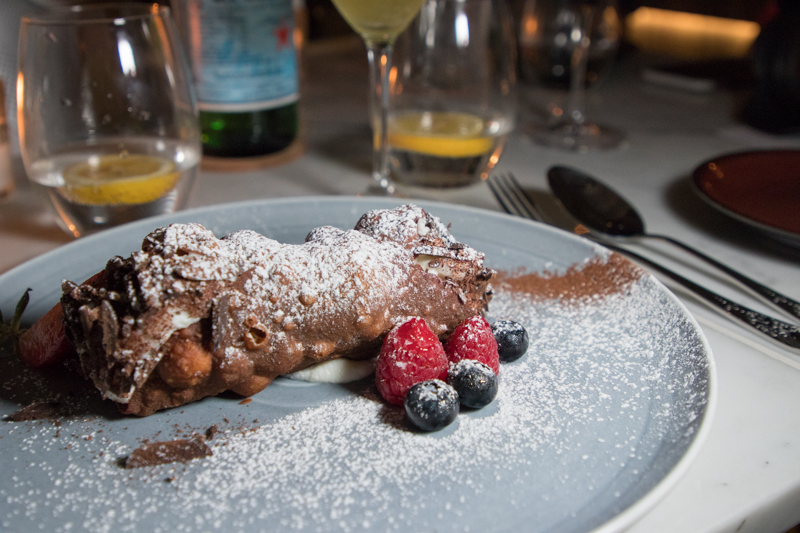 Every meal needs to end with dessert, so we tried the Sicilian Cannolo (S$14++). The hollow nut and chocolate roll was filled with custard-like ricotta cream cheese. The cream was a mixture of sweet and savoury, and I enjoyed the airy texture. 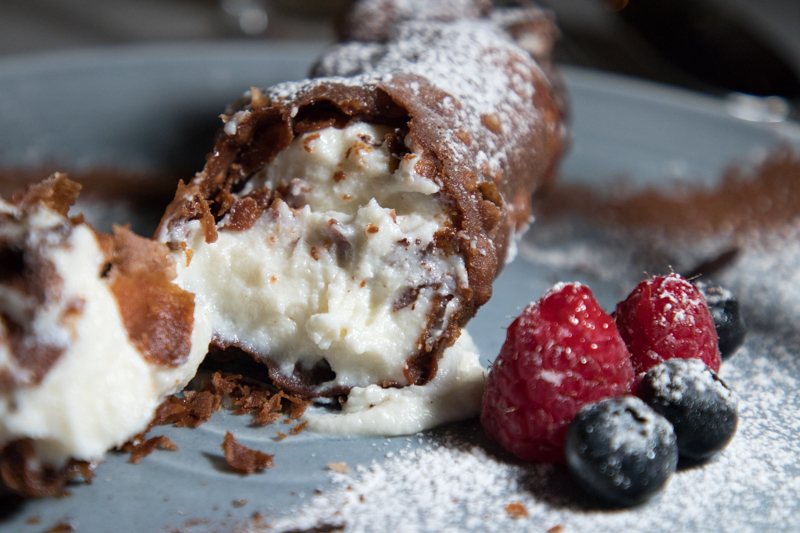 The brittle roll was crunchy with a caramelised nuttiness and paired well with the sweet and savoury cream cheese.

Served with berries on the side, the tartness contrasted this rather sweet dessert.

Pasta Bar would be a great date night spot, with its cosy dimly-lit interior and elegant bar seats.

However, I was slightly disappointed with some of the dishes, like the Lagane which was rather flat and one-dimensional.

With that being said, I would highly recommend ordering the Sicilian Cannolo and the Tortelli for a spectrum of flavours. The intricacies of the dishes at Pasta Bar would be a great conversation starter too!