Hidden within Goldbell Plaza in the Novena area is Baan Khun Nai, a recently opened Thai restaurant. This eatery prides itself on serving up authentic Thai foods at an affordable price point. 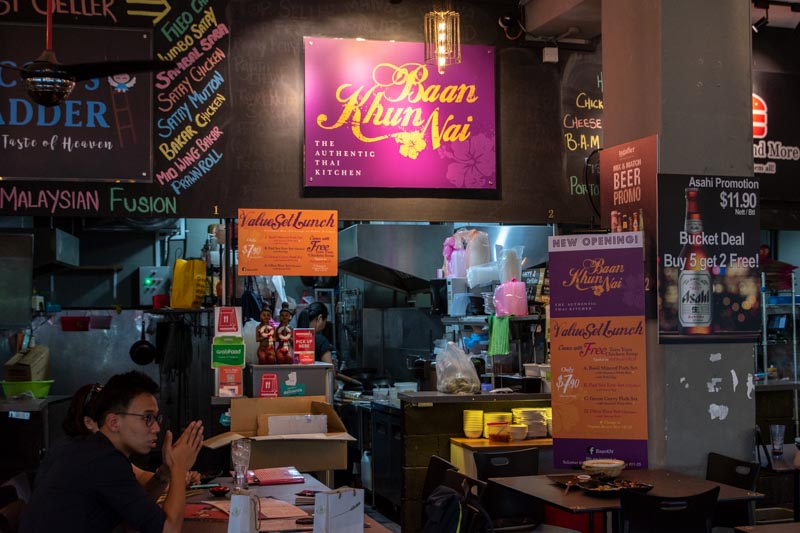 Thai food at Bar Bar Black Sheep. We were first drawn to this place by the news of super value-for-money lunch sets. Sure enough, there were quite a few people having the set lunches when we went down. To kick things off, we tried some of the appetizers available at Baan Khun Nai.

I fell in love with the Prawn with Thai Garlic in Oyster Sauce (S$9.90) once I tried it. The rich, concentrated oyster sauce was slightly fishy with caramel undertones, and had a good depth of flavour that was extremely pronounced from the first bite.

The oyster sauce paired brilliantly with the delicate prawn flavours — apart from being sweet, the prawns also had salty and subtle fishy notes. The flavour profiles of the oyster sauce and prawns blended into each other very nicely. 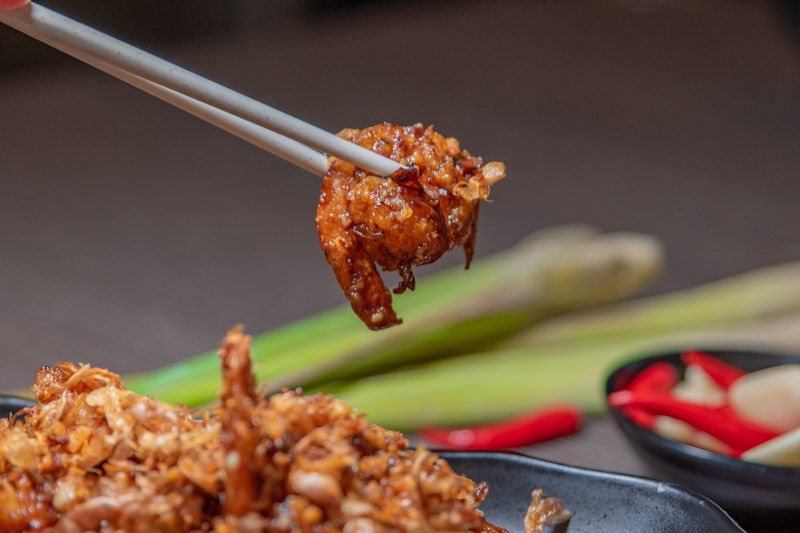 This was highlighted by the fried garlic shallots, made from garlic flown in from Thailand that’s supposedly more aromatic and pungent than most garlic varieties.

The punchy garlic elevated the overall dish, both taste-wise and also with its crunchiness, pairing well with the fried prawns. 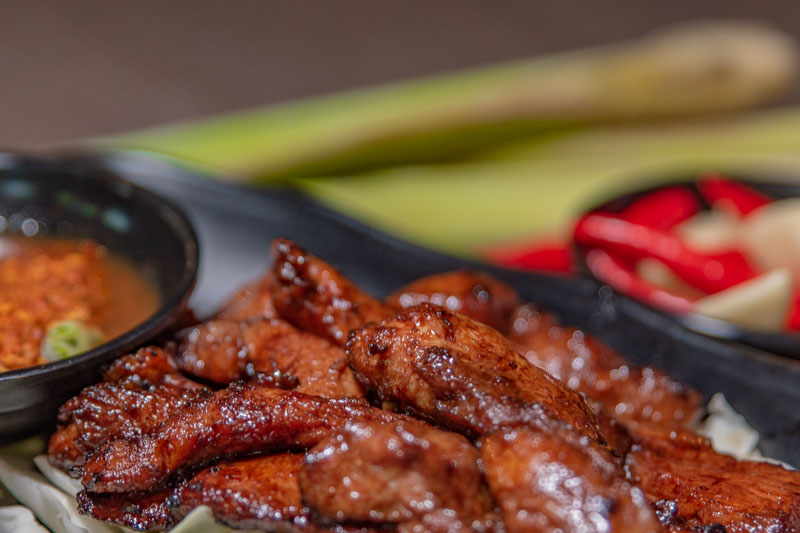 Next, we had some Grilled Pork with Thai Dressing (S$8.90). The pork was not very tender, and neither was it particularly juicy, but it had the distinctively gamey sweetness of pork.

There was a slight bitterness and char to it too, which was a good replication of authentic street side grilled pork I had in Thailand. 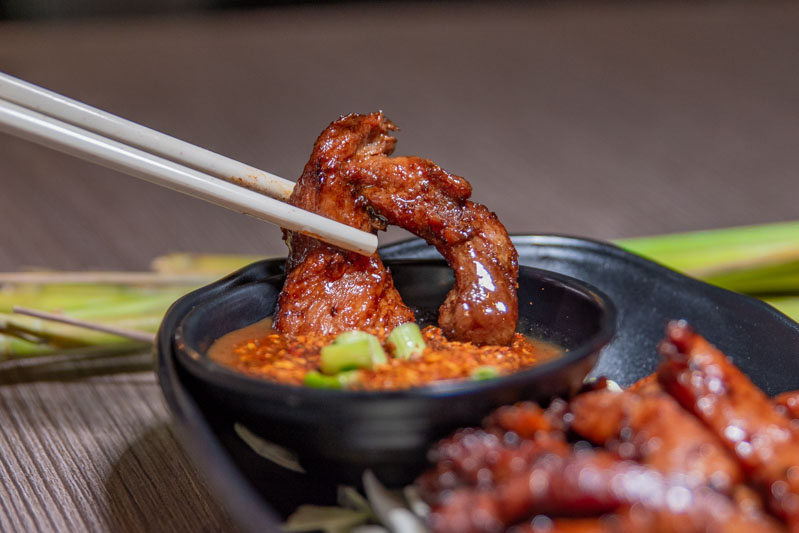 The Thai dressing was made of tamarind, dried chilli and spring onion. Unfortunately, it was way too spicy for me to be able to fully appreciate the flavours from the spring onion and tamarind — but hey, it’s an “authentic” level of spiciness! 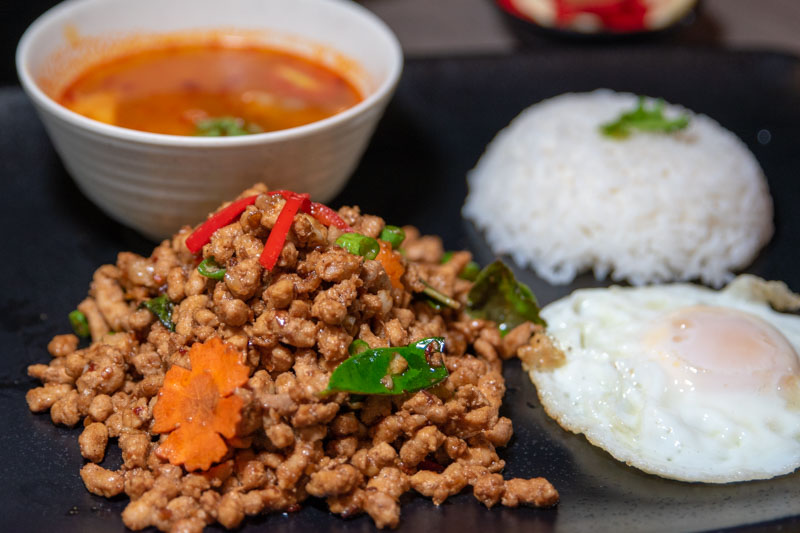 We couldn’t possibly miss out on the set lunches that first drew us there when we dropped by. Priced at S$7.90 per set, you can choose between four mains for the set lunches. All sets come with free Tom Yum Chicken Soup. 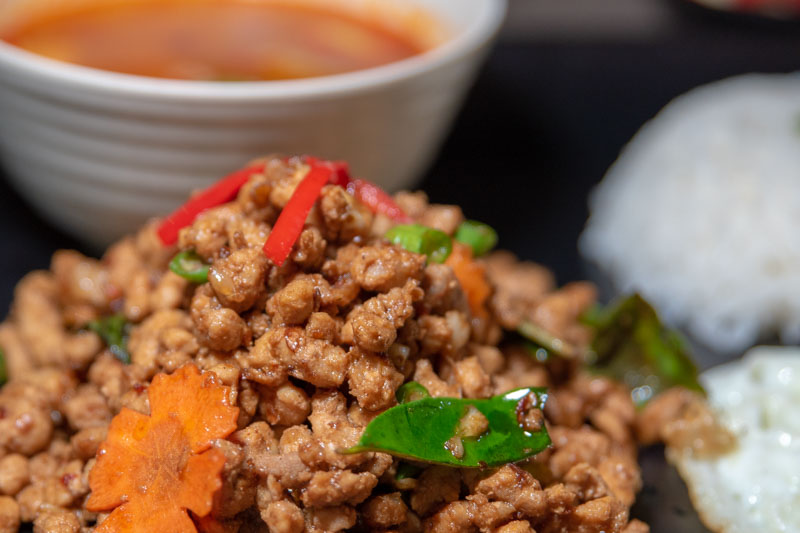 We had the Basil Minced Pork Set (S$7.90), which I heard was a best-seller at the stall. The pork used is minced in-house, which provided a better texture to it and made the pork more tender.

However, you might be disappointed like I was when I discovered that the basil taste was not very apparent. In fact, it was pretty much non-existent, which was a shame. 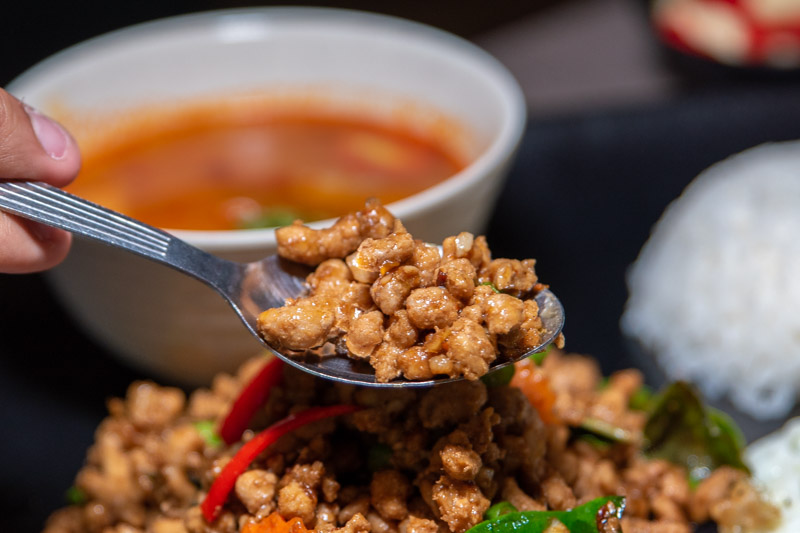 The Basil Minced Pork Set was also a tad bit too spicy for my liking, though I generally fare quite well with spicy dishes. You might want to let the chef know to tone down the spice levels if you order this dish. 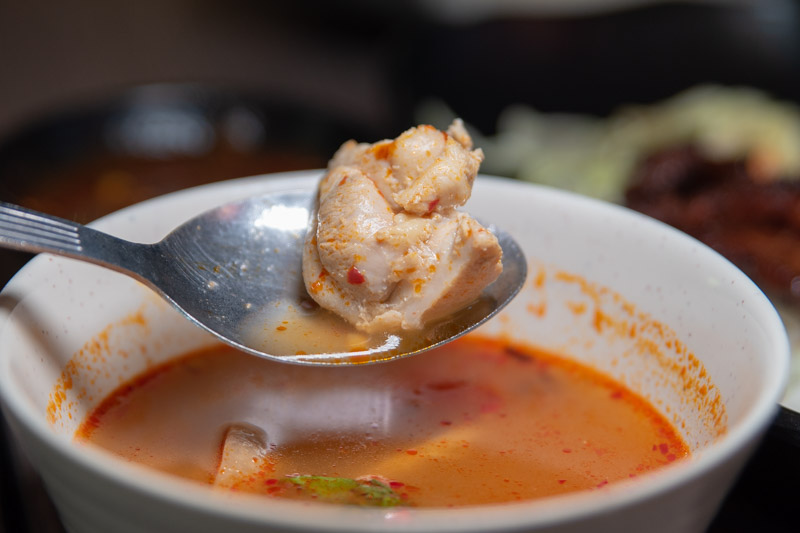 The Tom Yum Chicken Soup was pretty well-executed. I expected Baan Khun Nai to scrimp on it seeing that it’s a free item, but I was pleasantly surprised when I tried it.

There was a generous serving of chicken pieces in the soup, which were tender and infused with tom yum goodness. The tom yum itself was not too overpowering but had a nice numbing spiciness which was really shiok. Lastly, we had the Green Curry Pork Set (S$7.90), which struck me as especially milky and had a strong coconut taste. I loved how rich and creamy it was!

It was also sweeter than what I initially expected, though, it isn’t cloying or over-the-top, so it’s still pretty enjoyable. 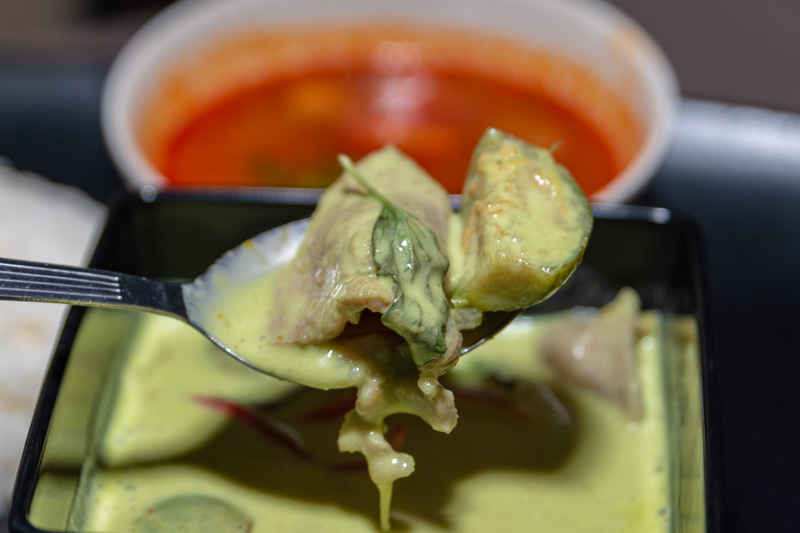 Similar to the Tom Yum Chicken Soup, Baan Khun Nai did not scrimp on the Green Curry Pork Set. The dish of green curry was full of ingredients! I really liked how the eggplant pieces soaked up all of that rich, savoury and sweet goodness and released it in my mouth.

One thing to note is that the Green Curry Pork isn’t particularly spicy. In fact, it helped to cool me down after the Basil Minced Pork. This also meant that it was a little odd that it was served with tom yum soup, as the green curry’s creaminess cancelled out the numbing spice of the tom yum.

It might be intentional and some of you might appreciate this pairing, but I personally felt that it was a little odd.

Baan Khun Nai stood out as an establishment that provided value-for-money meals. It’s especially appealing to the office workers and students that frequent that area since most food options there are pricier.

I appreciated how Baan Khun Nai managed to deliver generous and filling portions, without compromising the quality, taste or authenticity of the food. This is definitely one of the better Thai foods that I have had in Singapore, and certainly one of the best at its competitive price point.

You should check out Baan Khun Nai if you are ever in the Novena area and craving Thai food. You’ll get a good deal for the price you’re paying!