Backyard Kitchen: Spoil Yourself With Halal Fine Dining By A Michelin-Starred Chef At Jalan Kayu

When I first caught wind of a halal fine dining restaurant opening up, I held a lot of reservations about how good the food would be.

No doubt, its inception would be well-received (given the power of persuasion of the “green dollar”, aka halal certification). The exterior doesn’t spell ‘fine dining’, but once you step inside, the refined decor tells a different story. The maître d’ greeted me with a warm smile and I was shown my seat where my dining partner was already waiting for me.

I immediately noticed, however, the absence of white tablecloths, which is quite a signature of a fine dining place. Instead, they have black paper placemats, which actually downplays the sophistication that is usually associated with the fine dining concept.

Perhaps I was being nitpicky, so I allowed myself to experience the entire evening first before I made further judgement. 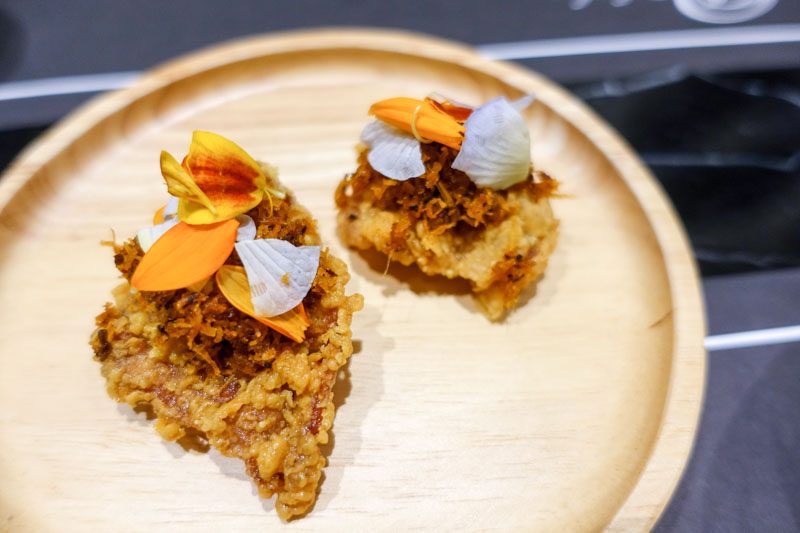 As a complimentary amuse bouche, we were served fried chicken skins topped with fried desiccated coconut (also known as serunding) mixed in with spices, and edible flowers.

Fried chicken skin isn’t classy in its own right, but hey, these were hella good in terms of taste. Sadly, these bites weren’t piping hot, and left a slightly unpleasant greasy mouthfeel. 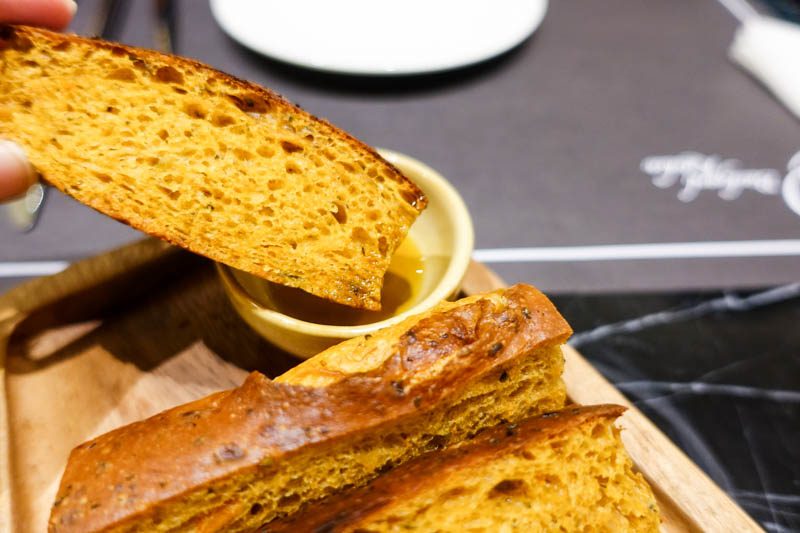 We also received complimentary bread, which is proudly made in-house. The tomato focaccia with a side of chilli oil was addictive, with the bread being pillowy-soft and lightly perfumed with the acidity of tomatoes.

Both of us went for the 3-Course Set Dinner ($58+), and decided to select all three different dishes for all courses so we could get a fairer impression of the menu with a taste of six dishes in total. There is also an a la carte menu available that’s just been launched, if you feel that three courses are too much. As a starter, I chose the Yellow Fin Tuna, with fish sauce, palm sugar and toasted rice. The tuna is sourced from the north of Thailand, from a region called Isan, and its flavour was balanced with the textural use of green apple slices and rice crackers. If you’re a fan of subtly tart and acidic dishes, you’ll love this appetiser.

What I loved most about this dish was the contrasting qualities of all the ingredients, in terms of taste, texture and even colour. They say people eat with their eyes first, and this was just a great example to qualify that statement. 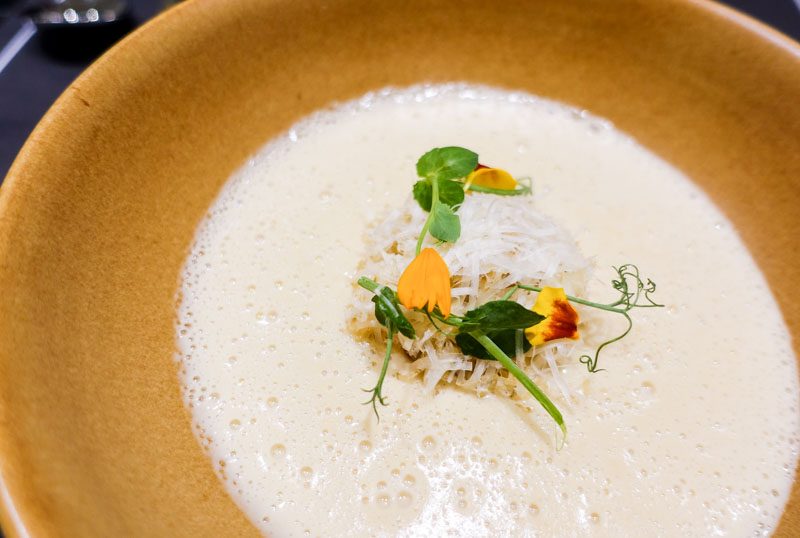 We were both trying to figure out if this was the best crab soup we’ve ever had, and we both agreed that this was the second best (which is pretty high in our ranks!).

The deep-fried potato remained crunchy throughout every scoop, and the viscosity of the soup was just right. We could even detect a hint of sweetness, which we could only assume was from the use of quality swimmer crab meat. 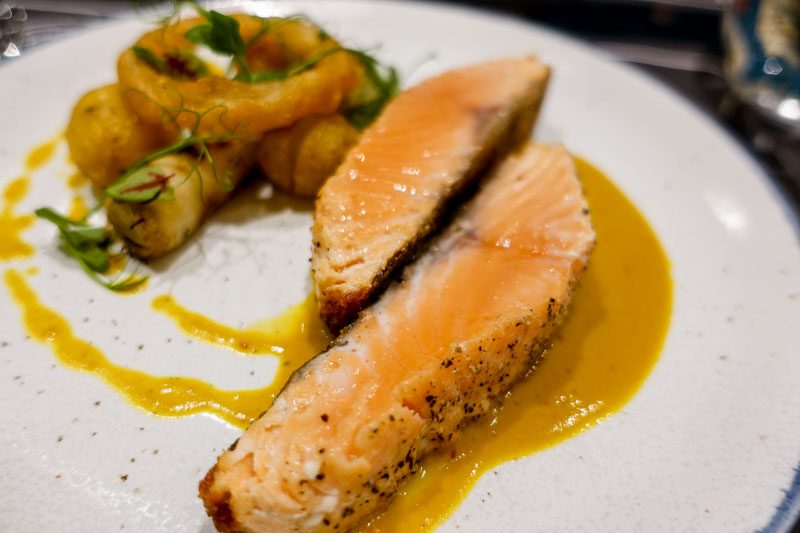 Opting for the fish main, I ordered the Crispy Norwegian Salmon. It was served with a deep-fried onion ring, fried baby potatoes, leek, and crab and finger root sauce. Contrary to its name, the salmon’s skin wasn’t crispy at all, and after discovering that it was cooked sous vide, it all made sense (but then why call it crispy…?).

Although the flavours were acceptable, the combination of fried sides with a fatty fish like salmon proved to be too greasy on the palate for me. I found myself chugging lots of water at this point of my meal. The best part of this dish was actually the sauce; it was akin to a sweet curry that was very savoury. 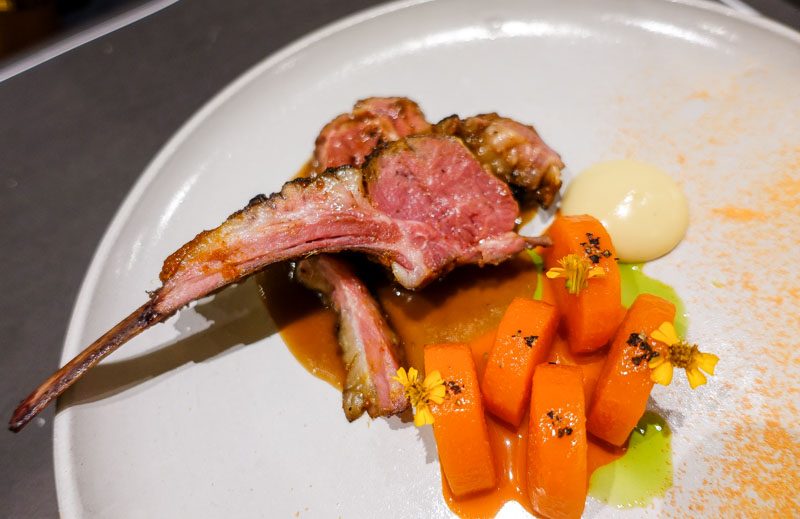 The other main served was the Australian Lamb Rack. Allowing the lamb to be the star of the plate, the dish was only garnished with boiled carrots, drizzled with curry leaf oil, tamarind sauce and a dollop of garlic puree, finished with a dusting of carrot powder.

I’m well aware that many people are turned off by lamb due to its potent gamey smell and taste, but this had neither of those. It was very subtle on the nose and the meat was extremely tender.

It’s a blessing that the lamb wasn’t overly dressed because we had the opportunity to truly appreciate this dish for what it was. 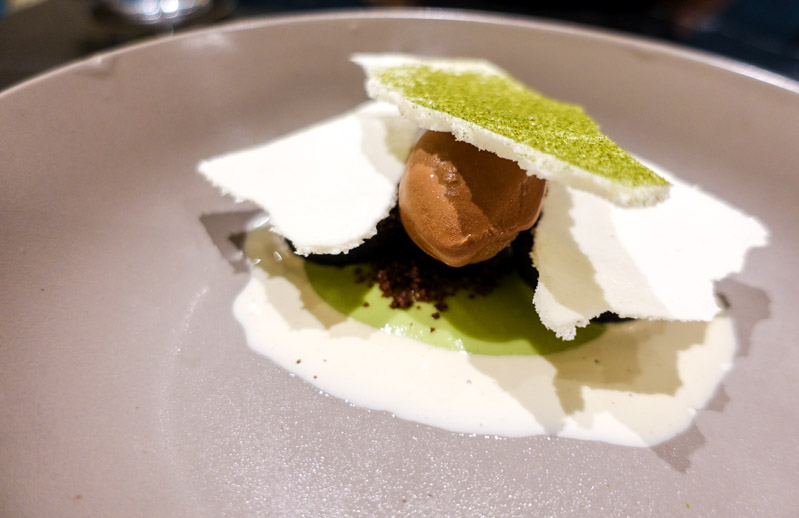 My favourite course of any meal had arrived, and I went with the Gula Melaka. It’s a scoop of Varlhona chocolate ice cream accompanied by two small chocolate cakes and a medley of coconut, pandan and coffee sauces. 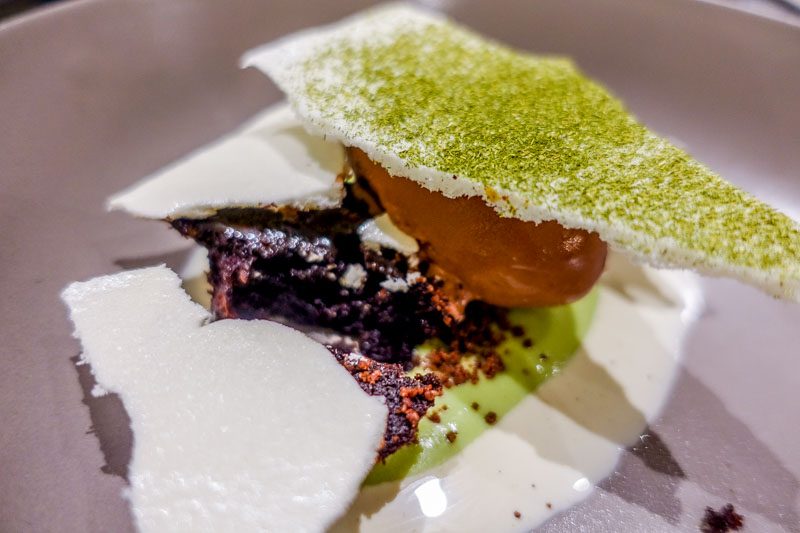 Given the name, I expected gula melaka to be the overriding taste, but I failed to detect any. Instead, the chocolate flavours took reign (not that that’s a bad thing), but the dessert fell a little flat. 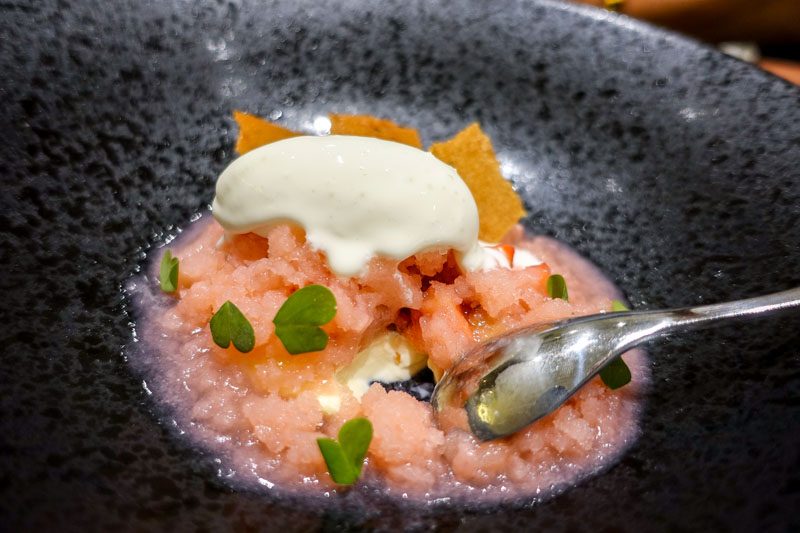 My dining partner’s choice, on the other hand, was a complete win. I typically don’t go for sour or fruit-based desserts, solely because I like to indulge when it comes to sweet things. But this Calamansi dish made me regret not picking it.

Beneath the granita (a semi-frozen dessert made with ice, sugar and other flavourings), was a silky piece of panna cotta, complemented with coconut. The calamansi chips were a delightful touch that added to the sweet-sour flavours. Overall, it was such an enjoyably refreshing dessert that we licked the bowl clean.

Prior to trying the food at Backyard Kitchen, I already had my own presumptions; I notice a lot of halal establishments that serve Western fare don’t meet the mark when it comes to food quality.

There could be many reasons behind this — sheer complacency, lack of knowledge or merely banking on the core Malay-Muslim crowd who, due to dietary restrictions, only have limited choices of places to eat.

I can count on one hand the number of halal Western restaurants I will return to, and now, I can add one more. The food here actually impressed me, and here’s to hoping that my journey from the West won’t be a deterring factor.

Previous articleHook Coffee: We Got The Low-Down + Taste Test On This Quirky Coffee Subscription Service In SG
Next article10 Butterfly Pea Superfood Dishes + Drinks In Singapore Prove The Craze Is Taking Flight Can A Food Writer Lose Weight? I Took On A Month-Long...