I reckon that after a long, arduous day at work or school, a well-deserved treat is in order. Given that we are a nation of foodies, what better way to reward yourself than with a tasty and satisfying romp around a food fair? With the Bedok Town Square Food Fair in full swing, you’re guaranteed a good time. This fair only runs till 8 December 2019, so there’s no time to waste — toothsome delights await! Hot Star Fried Chicken (豪大大鸡排) is a stall that needs no introduction. Their incredible and rather magnificent servings of fried chicken have captured our hearts and stomachs. Plus, I’m not one to say no to fried chicken. 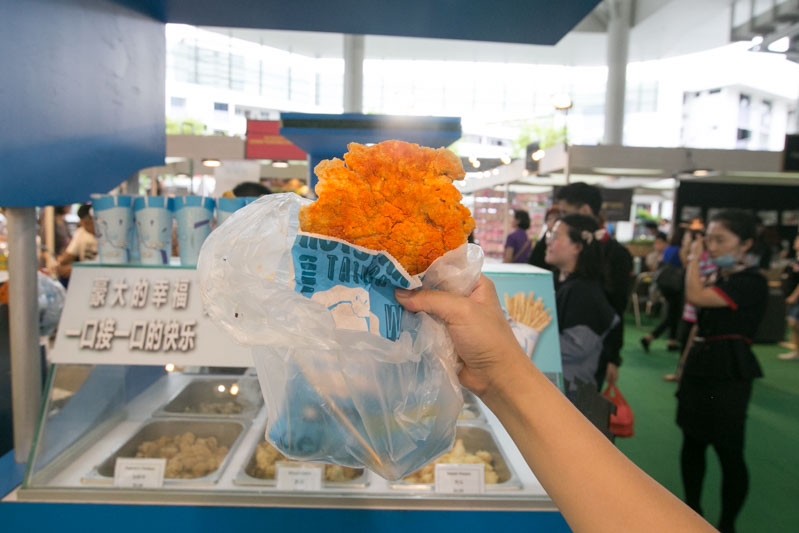 I was already familiar with the Hot Star’s king-sized fried chicken but given our penchant for anything and everything spicy, I went for their Spicy (S$6.50) instead.

This is your usual fried chicken but covered with a glorious and somewhat intimidating layer of vermillion-coloured powder. The chicken was tender and crispy as always, I must say the chilli powder does indeed pack a punch so fair warning to all our spice novices. If devouring an entire chicken cutlet is just a little much for the moment, Hot Star Fried Chicken has an equally delectable range of fried goods to suit your fancy. 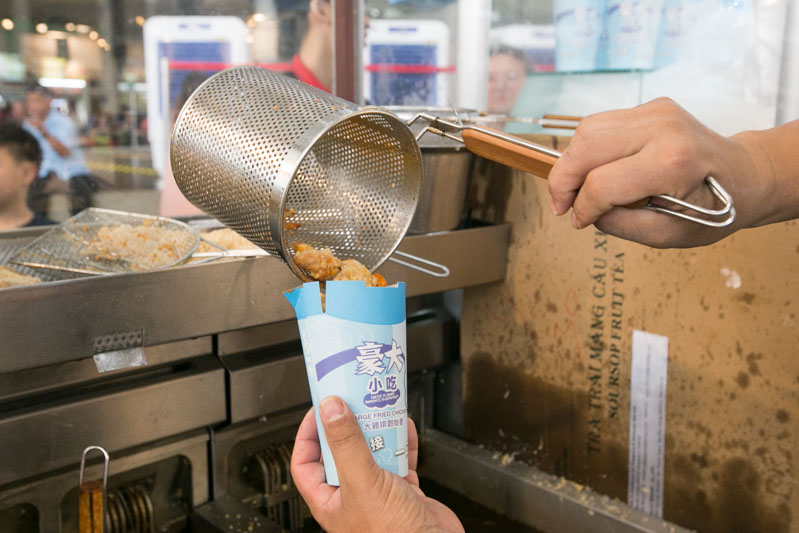 From Sweet Potato (S$3.50) to Mushroom (S$4) to Popcorn Chicken (S$5.50), you get to decide how far into deep-fried heaven you’re willing to go. Ever a reliable and tasty option, you definitely cannot go wrong with Hot Star Fried Chicken.

Another pit stop you have to make during your trip to Bedok Town Square Food Fair has to be the bustling Ikan 1986. This stall might be new but their otah recipe has been around for more thirty years. 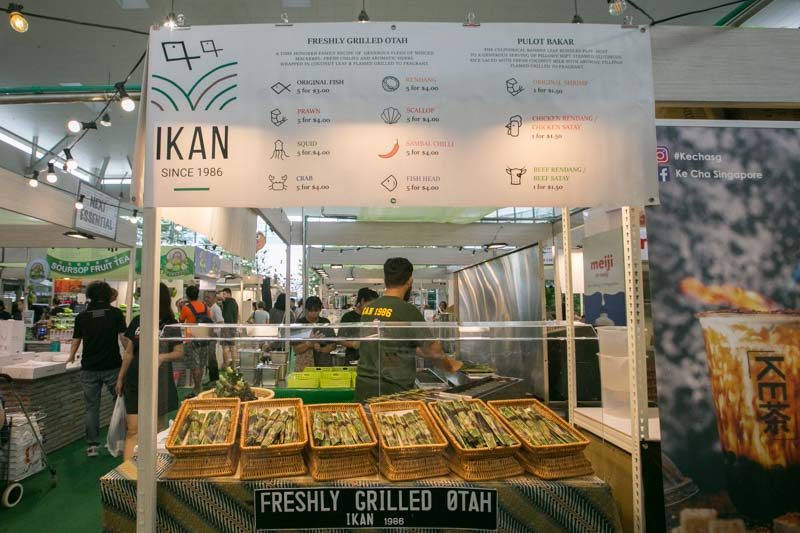 As you first approach the stall, besides the tantalising smoky aroma of otah‘s wafting through the crowd, you’ll also notice a small but seemingly never-ending queue in front of Ikan 1986. A sure sign that the otah is good right? 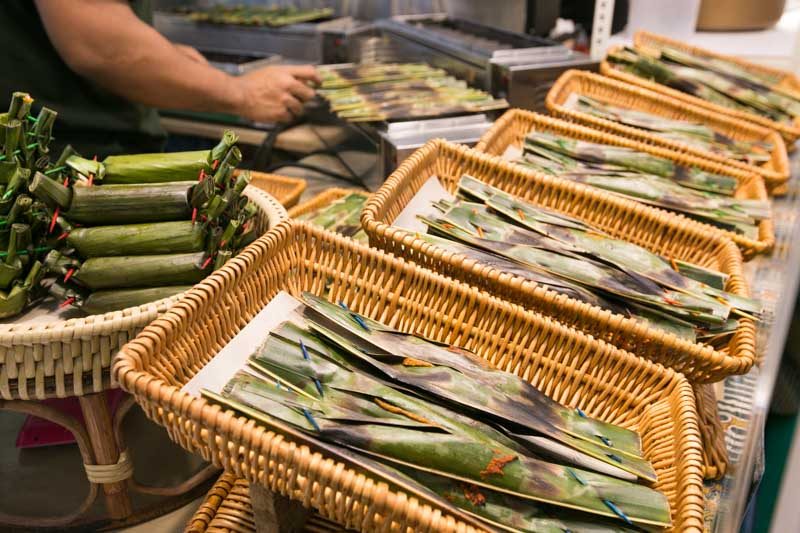 To keep things interesting, Ikan 1986 also offers a whole host of assorted flavours for their otah such as Prawn (five for S$4), Squid (five for S$4) and even Crab (five for S$4), differentiated by the varying coloured toothpicks.

As one of my quintessential food fair buys, I couldn’t wait to see what Ikan 1986 had to offer. 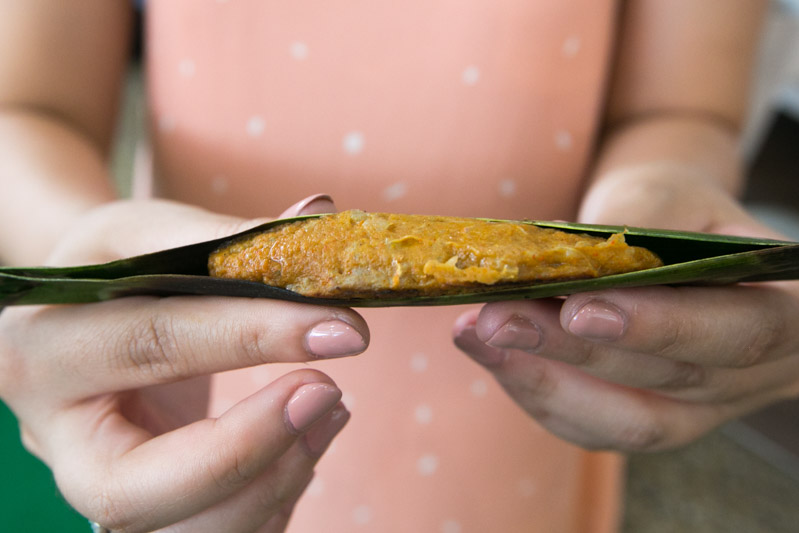 The Singaporean adage is true, ‘if there is a queue, it has to be good’; Ikan 1986’s otah did not disappoint. I tried their Original Fish (five for S$3) first and it truly hit the spot. The texture was just right, smooth but not too finely mashed that it becomes mushy— everyone will be pleased.

The otah was well-balanced and savoury with just the right amount of heat to keep you coming back for more. The perfectly charred coconut leaf just sealed the deal. This was as good as otah‘s come. 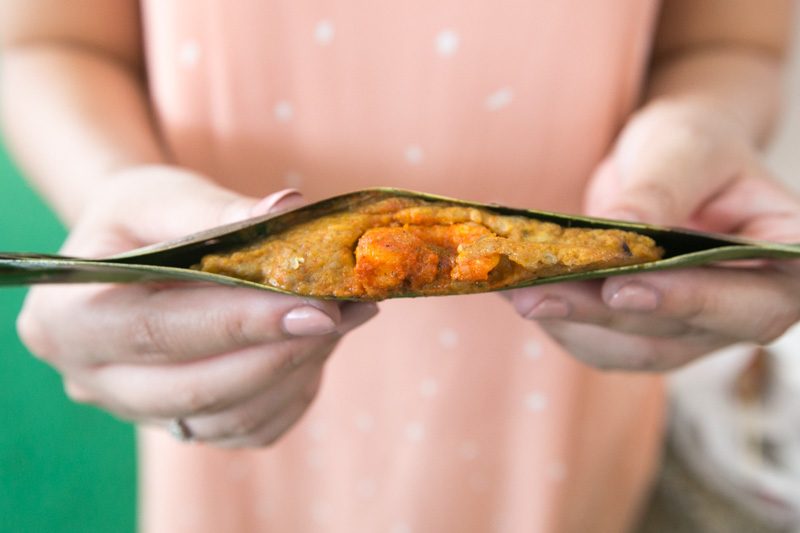 Another popular flavour from Ikan 1986 was the Prawn. As the name suggests, this is your normal otah but with a delicate little prawn parked right in the middle. The prawn was also seasoned with a liberal amount of sambal which was a nice touch. 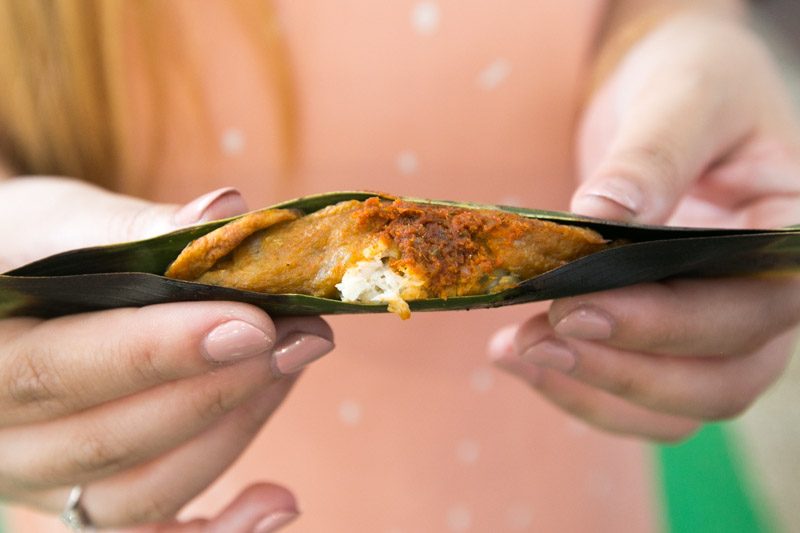 A highlight for me was certainly Ikan 1986’s Crab flavour. This one came with a generous portion of crab meat and a dollop of that winning sambal. As an otah purist, I was pleasantly surprised by how well the crab went with the otah. The contrast in textures was very welcomed and I found myself searching for another one. Otah might seem like relatively simple street food but a truly good otah is hard to come by. Not to mention, average tasting otah‘s are aplenty, some are either not spicy enough or have an unpleasant texture. I dare say, Ikan 1986 ranks as one of the best otah‘s I have tried. 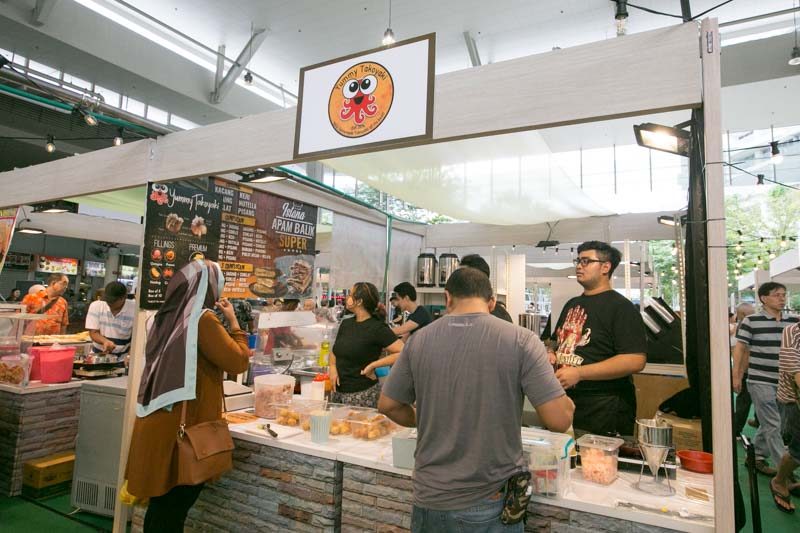 Another quintessential hit has to be takoyaki, and Yummy Takoyaki is where you can get your fix at Bedok Town Square Food Fair. 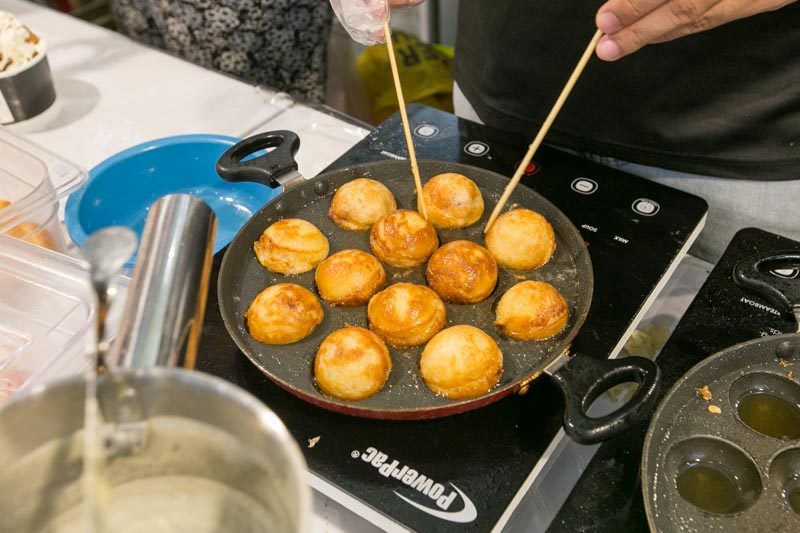 I do have a soft spot for this Japanese street food, having eaten these babies when they were introduced to Singapore’s food scene. Each serving of takoyaki from Yummy Takoyaki is going at five for S$4 and 10 for S$8. From the normal Octopus fillings to more unconventional ones like Crab and Hot Dog. 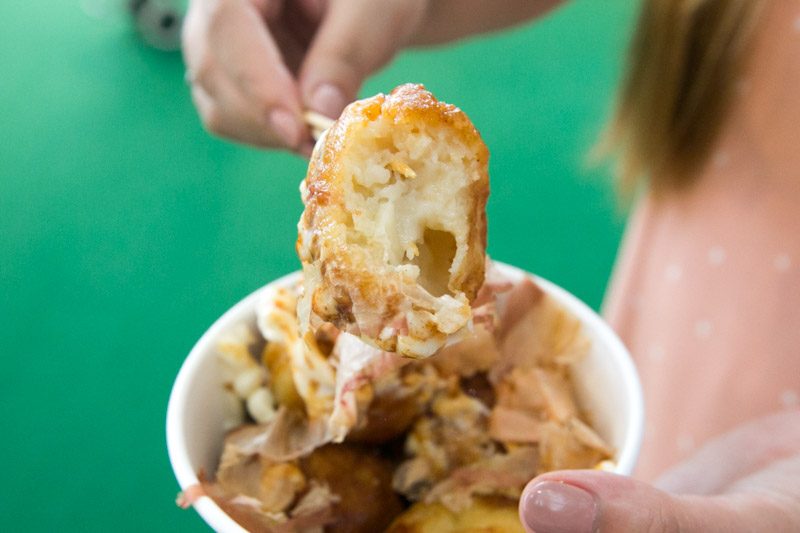 I found their takoyaki had a crispy exterior and a soft, fluffy centre.

Now, if you want to go luxe on your takoyaki you can opt for the Cheese Banji Ding Dong (S$8 for a box of five, S$10 for a box of 10). This takoyaki doused in a liberal amount of nacho cheese. Yup, this has to be the ultimate cheat meal. Noi Noi Sausages is truly a godsend for meat lovers at Bedok Town Square Food Fair. With more than eight different types of sausages available, you can truly eat till your heart’s content. 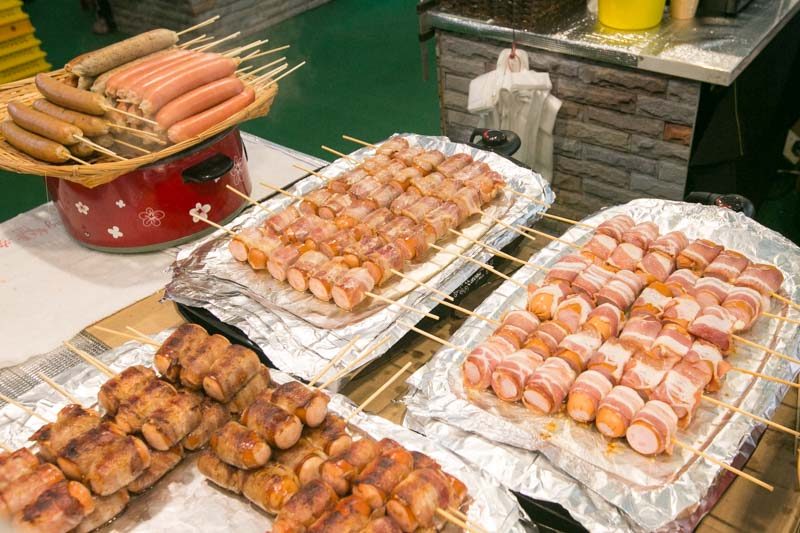 But, what I’m really after has to be their Hokkaido Snow Pork Bacon Wrapped Sausages (S$4 per stick). With a premium pig from Hokkaido, expect better marbling in the meat and of course, richer tasting bacon. 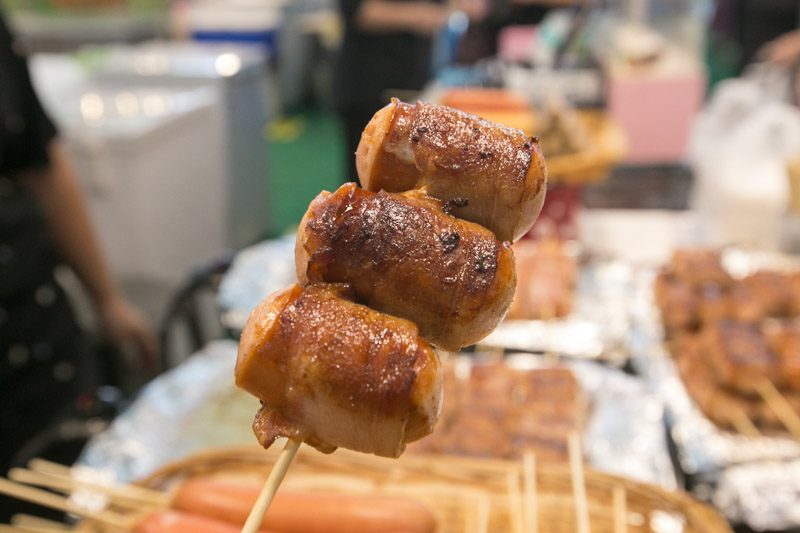 Nevertheless, they were still pretty tasty. Perhaps, an ice-cold beer would better bring out the flavour.

I don’t have to wax lyrical about how incredibly humid Singapore is, which is why drink stalls are extremely vital during a food fair. 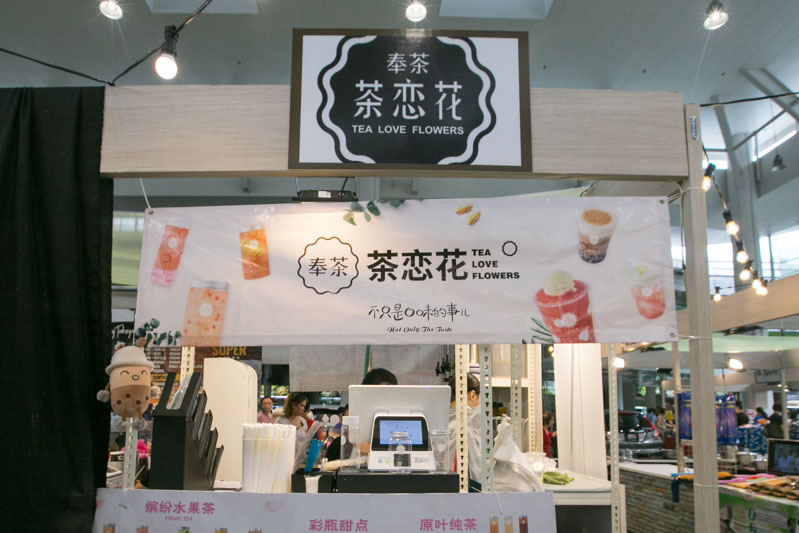 Feng Cha 奉茶 is where you can refreshing cups of Fruit Tea or the more indulgent Milk Tea to cool you off. Fruit Teas have been creeping into our tea-drinking scene as of late and I do like how much lighter they are as compared to our bubble tea. 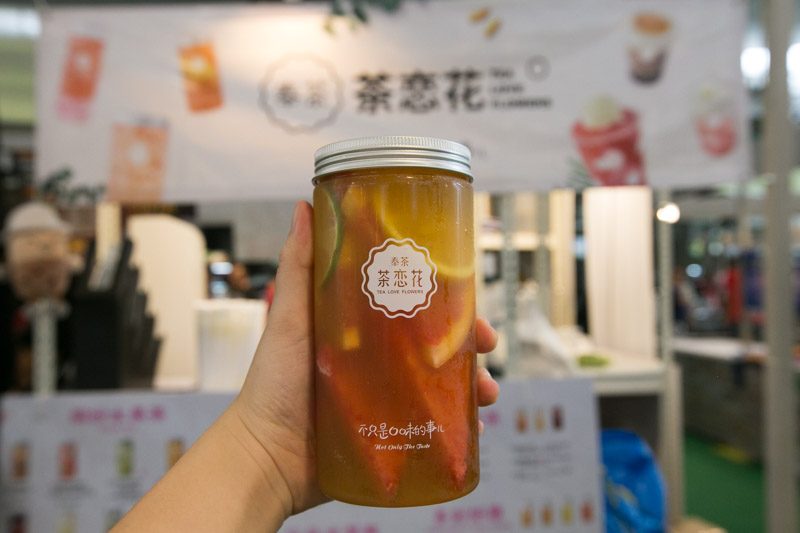 I chose their Rich Fruit Tea (S$4.90) which is made with a base of Jasmine tea and generously filled with sliced grapefruit, watermelon, orange and lime.

I was pretty impressed with how fragrant the Jasmine tea was; the subtle floral scent coupled with the mini cornucopia of tropical fruits made this quite a lovely drink. At its price point, I reckon it can even rival some of the bigger brands.

If you frequent food fairs often enough, you’ll know there will be a handful of few firm favourites who never fail to make their appearance. 888 Thai Tea.sg always makes for quite the scene with giant vats of thick orange Thai Tea and Thai Green Tea blending away. Well, we are all familiar with 888 Thai Tea.sg tea but this time I spotted an ice cream machine. Thai Tea Soft Serve? Sign me up! 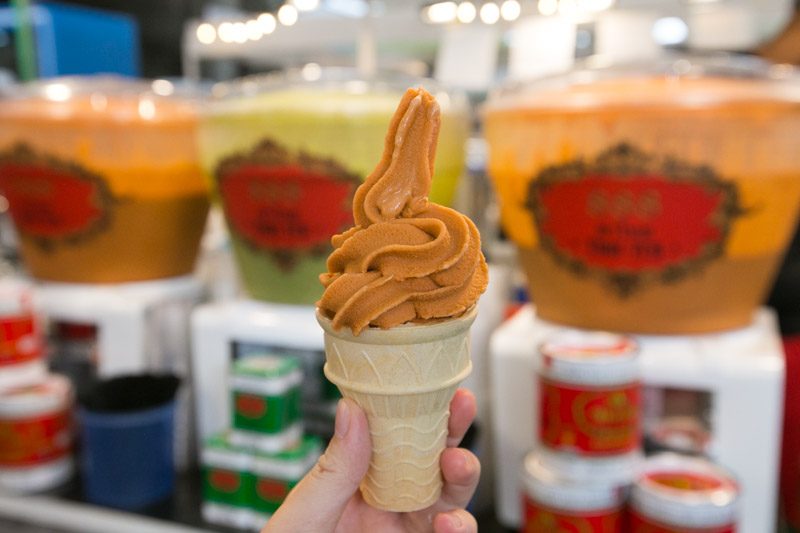 I had the classic Thai Tea Ice Cream in a cone (S$1.20) and just like the tea they were pretty good. The ice cream was thick and creamy but without the astringency that comes with Thai Tea. Plus, the ice cream was sweet enough that it was not cloying. 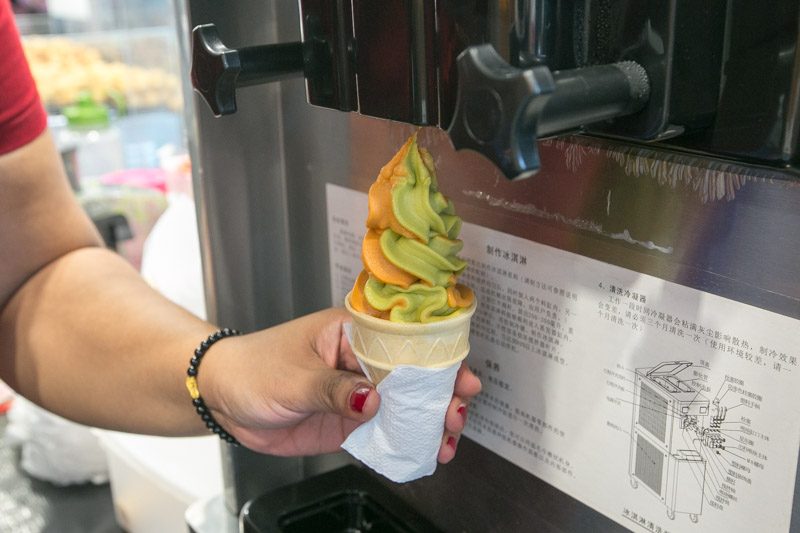 For a more thrilling option, you can get the Thai Tea and Green Tea Soft Serve Swirl (S$1.20 for cone, S$2.50 for cup), a cone that panders to our deep-seated affection for anything Thai. While the soft serve was not spectacular, I have to say I still enjoyed them immensely. These cones make for a great little ending to your little tour around Bedok Town Square Food Fair. 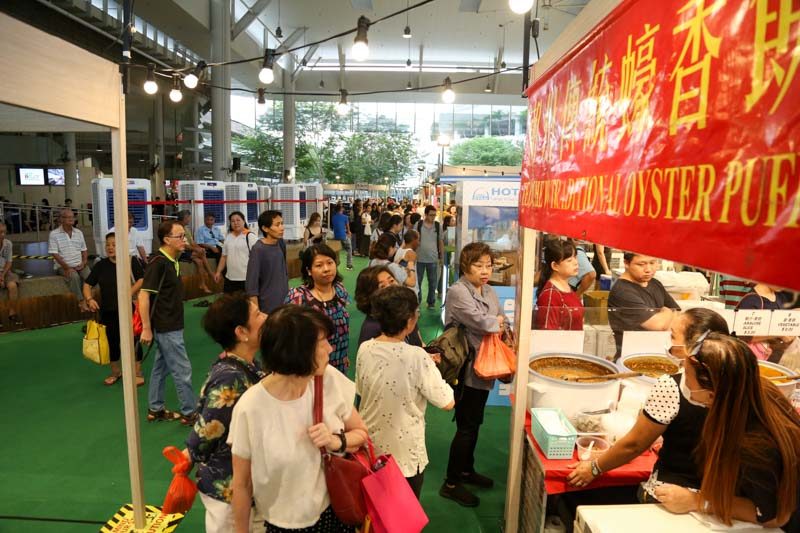 There is nothing like spending like a bustling food fair to take your mind off the stresses of the day. With a sizzling chicken cutlet in your hand and icy fruit tea in the other, what more can you ask for?

As Tom and Donna from Parks and Recreation would declare, ‘treat yo’ self!’, so we should.

*This post is brought you in partnership with Bedok Town Square Food Fair.