Bedrock Bar & Grill is an award-winning steakhouse and whisky bar, with multiple accolades that name it as the best grill house in Asia.

You’ve probably walked past it a dozen times—it’s located conveniently right outside [email protected]. If you take the exit near Marché, it’s right on your left, at Pan Pacific Serviced Suites Orchard. Other than its stunning line-up of woodfire grilled meats, such as Bedrock Pepper Steak (S$108), Bedrock Bar & Grill is actually the organiser and host behind the World Meat Series, where they curate, bring in, and feature different meats from all around the world.

They’ve brought in lamb from New Zealand, sake kasu dry-aged beef, and the Brandt Beef, and for the last edition of 2019, they brought in Budou-buta, a special pork from Japan. This pork will be served in three exclusive and limited-edition dishes, which will only be available from 30 October – 15 December 2019. 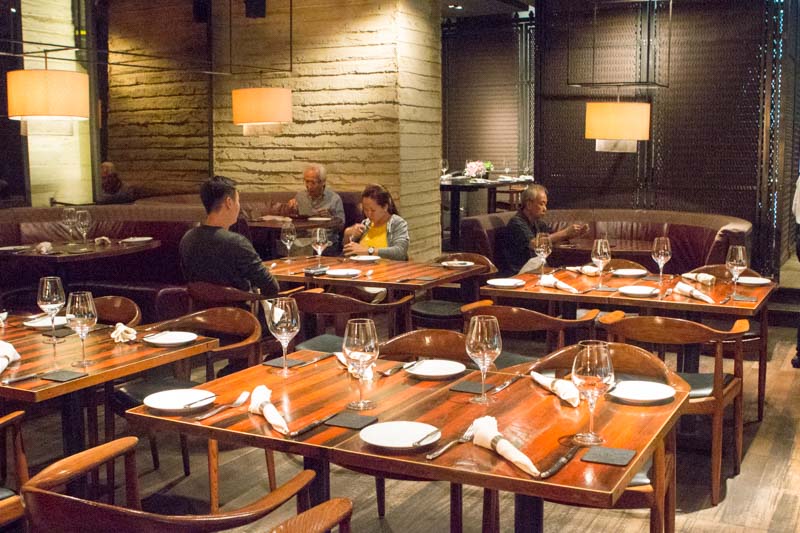 Bedrock Bar & Grill prides itself on being an exceptional steakhouse and whisky bar, and its interior is cosy, warm, and intimate, with plenty of leather booths, wooden tables, and warm lighting.

I went on to read more about the exclusive pork that I would be trying that day—the budou-buta pork. Apparently, the budou-buta pigs are so rare that they are only raised in two farms in Aya Town, Miyazaki, Japan. The pigs feed on a mix of Japanese grapes, home-prepared corn, and non-genetically modified barley. As a result, the pork is said to be more delicate, melts in your mouth, and has a milder scent than most pork. 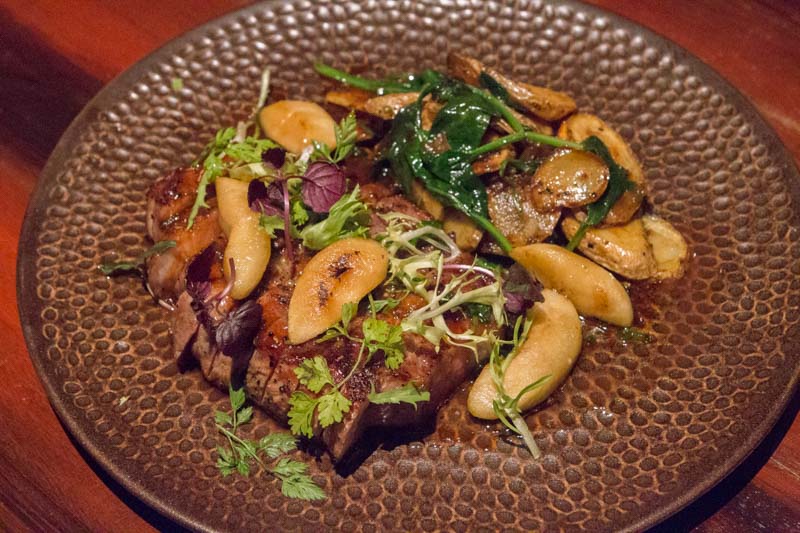 The first dish that was served was the Woodfire Grilled Pork Steak ($58++), which was served with sautéed potatoes and herb truffle sauce.

I was immediately impressed by this dish because of how gorgeous everything looked. The greens added a pop of refreshing colour to the brown plate, and to some extent, I didn’t even mind that the grilled budou-buta pork was hidden beneath all the vegetables. 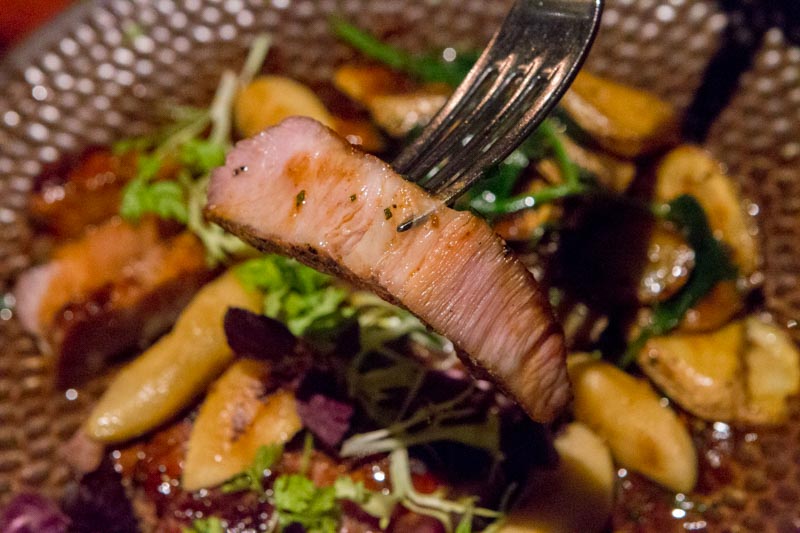 However, the minute I picked one slice of budou-buta pork steak up and placed it in my mouth, I was instantly blown away by its texture. It was so springy, supple, and juicy that the meat was almost crunchy! The subtle herb truffle sauce added an earthiness to the dish and helped to bring out the natural sweetness of the pork.

I loved how well-cooked the pork steak was. The outside was charred to a gloriously salty brown while the soft meat on the inside was delightfully tender. When I paired each mouthful of pork with the sautéed potatoes, it almost became physically impossible to stop from diving into my next slice of meat. 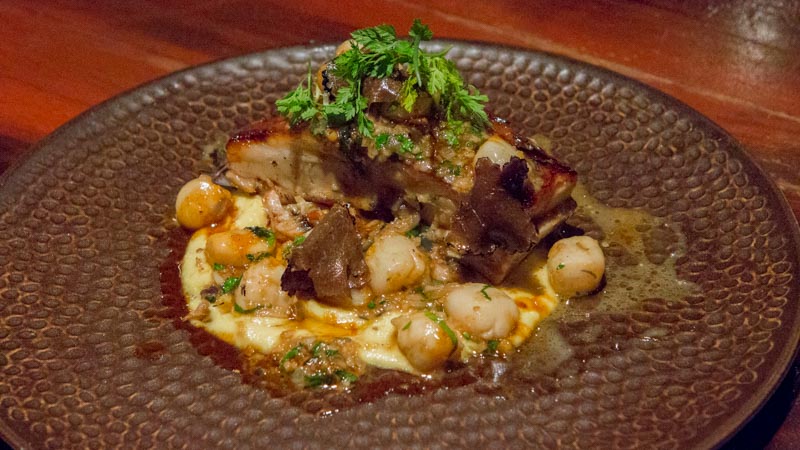 Then, the next dish was served—the Pork Belly with Scallops ($68++). The scallops were adorably little and I almost mistook it for garlic cloves, and it sat on top of a heap of corn puree and braised cabbage. As I sliced into the pork belly, I noticed right away that its meat was so soft that I had trouble making a clean cut. The meat started falling apart, like pulled pork, and I couldn’t wait to try it. My teeth sank into a piece of budou-buta pork belly, and the meat slowly melted in my mouth like butter. It was so soft I couldn’t tell what was fat and what was meat anymore.

There was a naturally clean sweetness to the pork—which I’ve learnt only comes about when the pork is extremely fresh or well-fed—and was accompanied by a smokiness from the grill. Plus, there was a tangy and sour aftertaste from balsamic vinegar, which helped cut through the creamy corn purée. I took it upon myself to try something outside of Bedrock Bar & Grill’s limited-edition World Meat Series menu, and my eyes fell upon the Chopped Steak Burger (S$38). It came with USDA prime beef, bacon, a fried egg, mustard barbecue sauce, oak-smoked aged cheddar, and a heap of fries. This was such a classic American burger. The beef patty was grilled to a crisp on the outside, resulting in crunchy little bits of meat, but the meat on the inside was tender and pink.

I loved that it wasn’t overly seasoned—most patties are drenched in black pepper or salt—so I could taste the natural juices from the beef patty. Each bite was accompanied by the creaminess from the fried egg and smokiness from the barbecue sauce. I almost expected it to come with yellow mustard or horseradish, but was slightly disappointed to find that it hadn’t. To end off the meal, we ordered the Bedrock Crumble for 2 (S$26). It came with oven-baked apples, walnut streusel, and a heaping scoop of vanilla ice cream. Even though I was already stuffed to the brim, this apple crumble made me go for seconds. If you’re expecting a layer of hard pastry, you might be slightly disappointed—Bedrock Bar & Grill’s version features walnut streusel that’s loosely piled over a bed of oven-baked apples, but that’s exactly what made it so addictive.

It reminded me of a bowl of granola with vanilla ice cream because of how crunchy and crisp the individual pieces of walnut streusel were. It was slightly sweet and nutty, and pairing it with the spiced apple slices and the cold ice cream was such a delight.

There’s a reason why Bedrock Bar & Grill has won so many awards over the years, and it’s easy to see why. All its meats are excellently cooked, its dishes are thoughtfully executed, and it brings in limited-edition events like World Meat Series to celebrate all things meaty and good.

It’s safe to say that when Bedrock Bar & Grill is launching the next edition of World Meat Series, I’ll be dropping by to try it.