Bee Bee’s: Fist Bump Your Way Through Peranakan-Inspired Cocktails At This Bar In Boat Quay 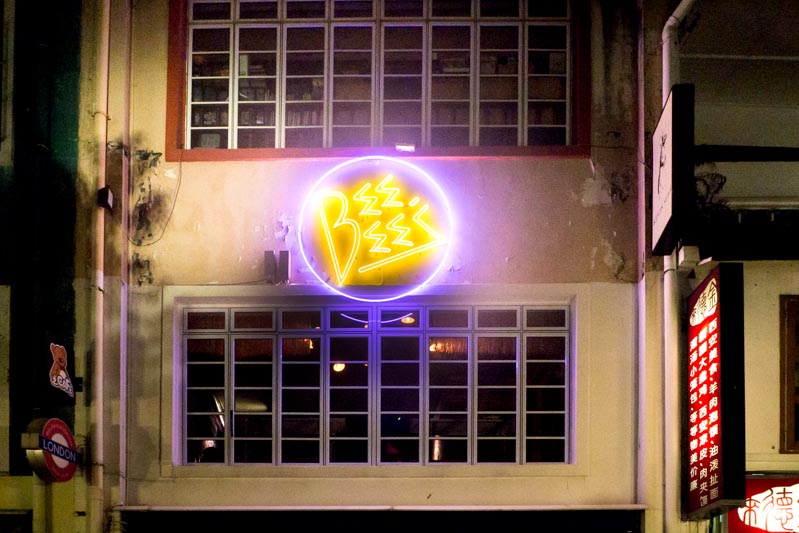 Meet Bee Bee’s, a watering hole in Boat Quay opened by the Kishore brothers behind the Taiwanese street food restaurant, Five Ten, where everything is priced at only $5 or $10.

While I can’t say that the drinks share the same price point as Five Ten, what you do get here are cocktails that are out of the box and have successfully piqued our interest. 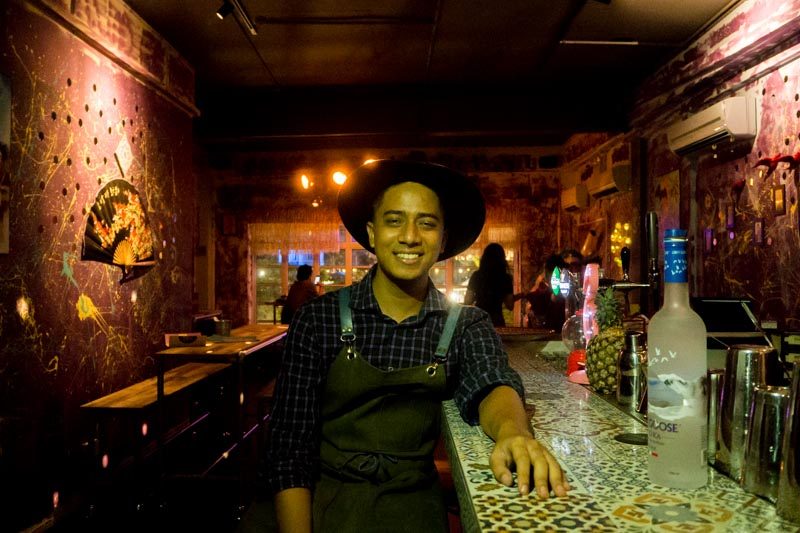 We met bartender and owner Bryan Kishore, who explained that Bee Bee’s is affectionately named after his Peranakan-Chinese mother.

Drawing inspiration from his mum’s cooking and food he grew up with, you can expect classic drinks infused with a little bit of sweet, a little bit of Peranakan spices and a whole lot of nice. 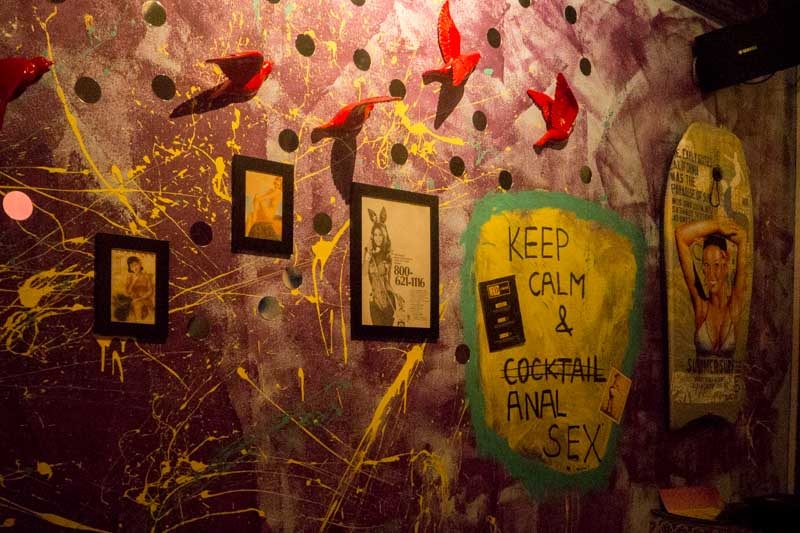 With pictures of pin-up girls and cheeky one-liners dotted across the walls, you’ll be amused and entertained while walking to your table. 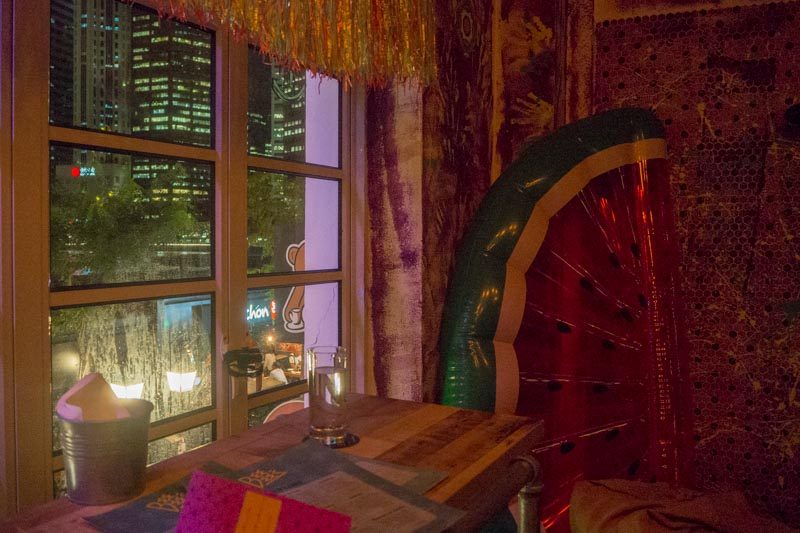 Psst, grab the tables by the windows which offer views of the Singapore River and the skyline featuring surrounding offices in the CBD area. 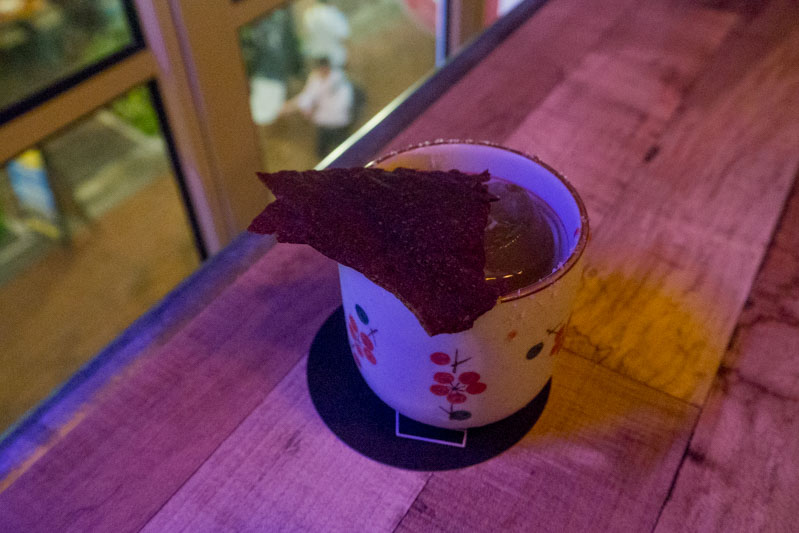 Upon settling in, we were served the Floral Nanka ($15 nett) garnished with a piece of cinnamon-dried jackfruit that tasted like my childhood favourite haw flakes, which complemented the citrus-oriented drink.

Made with Bacardi Oro, jackfruit syrup, fresh lime juice, agave syrup and orange blossom water, this was a great starter for the night — refreshing to our palate and soul with its tangy kick. 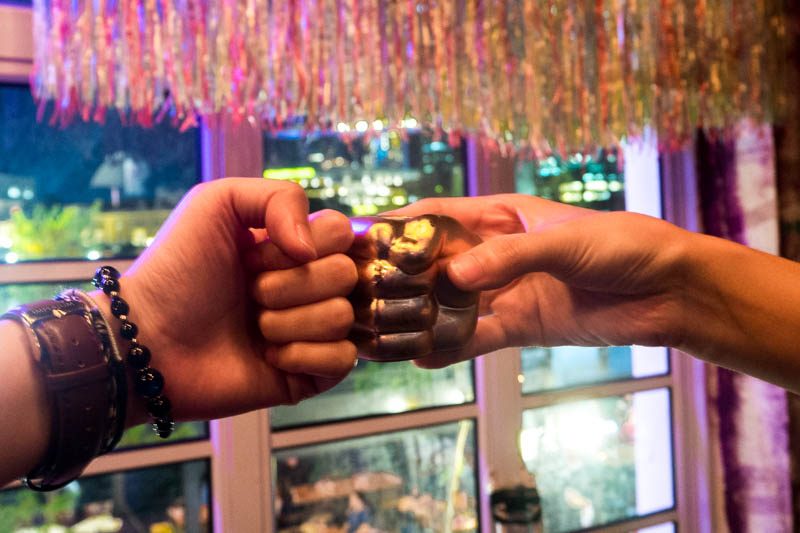 I could do with a sweet Respite ($15 nett), after a long day at work. A word of caution: this is the strongest drink on the cocktail menu, so pick your poison carefully if you’re weaker when it comes to your alcohol tolerance.

The drink was deceptively effortless to guzzle down as it was indulgent from the concoction of crème de cassis, sweet vermouth and chocolate bitters. There was an aftertaste of bourbon and hints of berries tingling at the back of our throats after every sip. Serve me a cocktail in a teacup, garnish it with fresh flowers and I’ll be sold. Murmurs in Purple ($15 nett) captivated my heart with its dainty presentation.

Predominantly gin, the subtle grape flavour was welcoming and we could not stop at one sip. Not long after, we found ourselves tilting the cup at 90 degrees for the last drop. 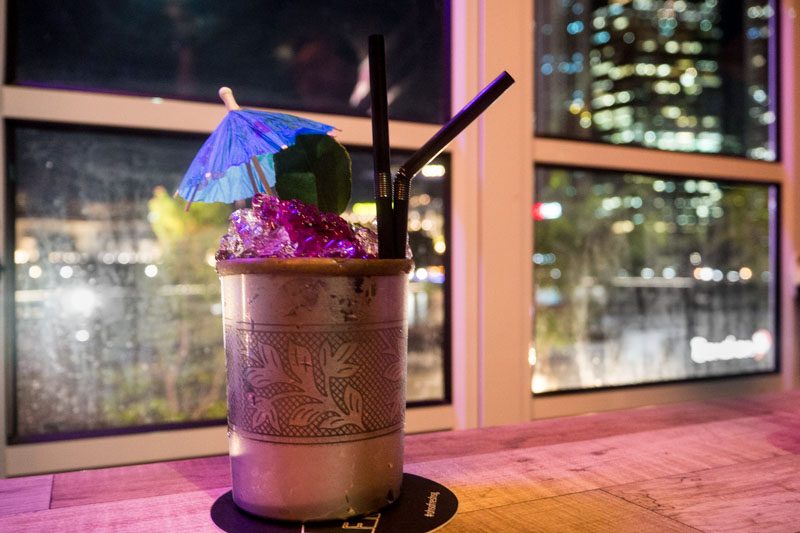 *Cue Demi Lovato* Sorry Not Sorry ($15 nett) is made with Cachaça and lemongrass syrup resulting in a sugary drink perfect for Singapore’s all-year-round tropical heat. Light and refreshing, it was almost like sipping on a cup of fruit juice.

The tiki cocktail is topped with red dragonfruit and soursop puree atop a bed of crushed ice, reflecting its solidarity with the LGBTQIAPD community. 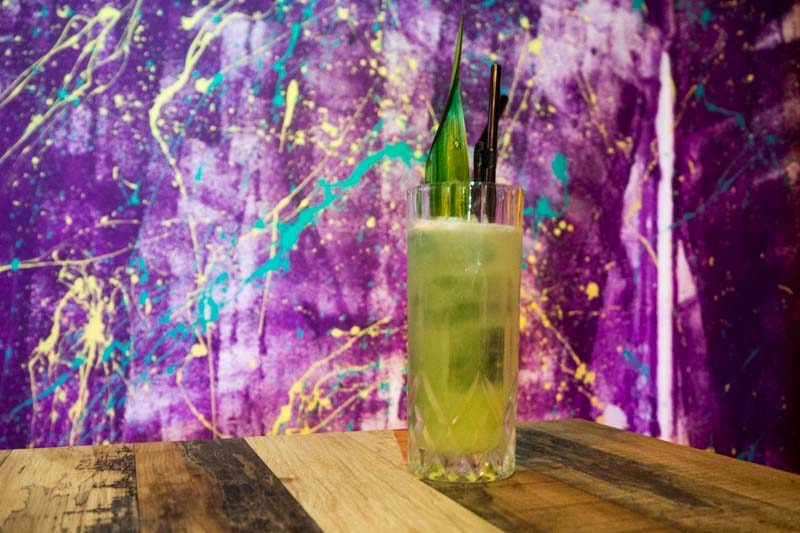 The Sombong ($15 nett) had notes of pineapples shinning through followed by the sweet scent of melons. Not only is it garnished with pandan leaves, the drink is drizzled with pandan syrup too for a smooth mouthfeel and an aromatic lingering taste. 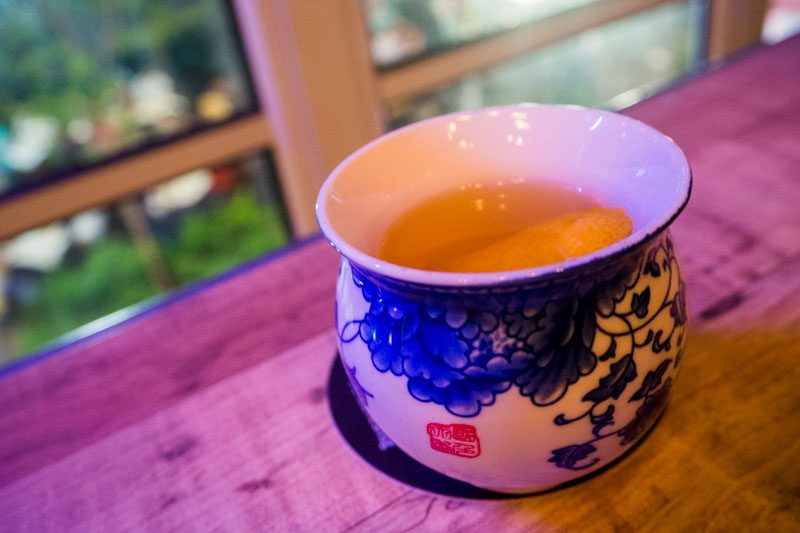 The Amboire ($15 nett) was reminiscent of Chinese herbal drinks but don’t let that deter you from trying it. There’s an old Chinese saying: ‘苦口良药’, which translates to ‘good medicine tastes bitter’. I guess you could say the same for this?

Slightly dry, the spicy, tonic-like taste evolves into a herbal sweetness if you stick through until the end of the drink. That said, this particular drink is an acquired taste and probably suits those with a more adventurous personality. 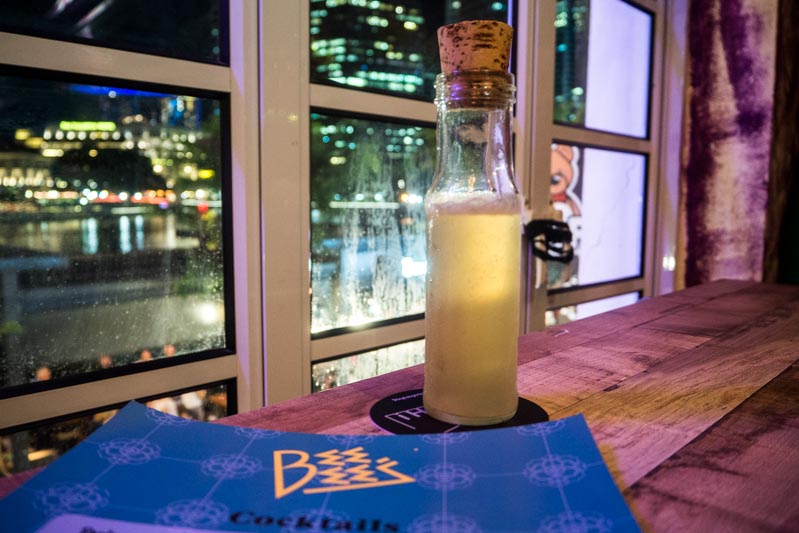 We ended the night on a sweet note with a bottle of Fresh ($15 nett) that smelt like Christmas and spiced apples. Yums!

If apple pies are your thing, you’ll love that it tastes like Granny Smith apples, peppered with a hint of cinnamon and smoky undertones from the rum. I would have downed two more bottles if not for the copious amount of cocktails we already had before this. Though there isn’t a kitchen at Bee Bee’s, that doesn’t stop them from keeping their hungry customers fed. The dishes are prepped in Five Ten and then heated up in the bar.

Kueh Pie Tees are so easy to munch on when I’m feeling peckish, and I loved the Peranakan spin on the Tuna Tartare Kueh Pie Tee ($7 nett, 3 pieces per portion). Marinated with spices and condiments that are commonly used in Peranakan cuisine, this dish was filled with robust flavours of basil and sesame oil. 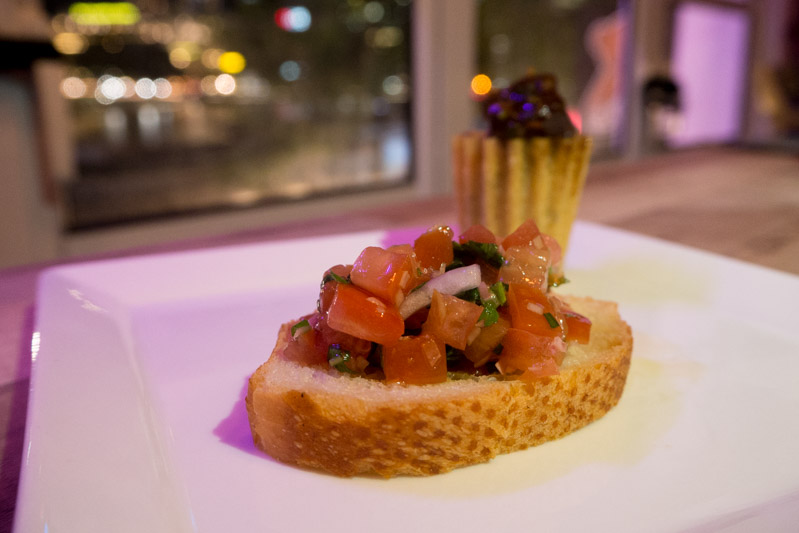 We also tried Auntie Mary’s Bruschetta ($6 nett, 3 pieces per portion) which is topped with tomato and burrata and seasoned with Peranakan spices. The ingredients were fresh and acted as palate cleansers in between drinks.

Bee Bee’s laid-back and whimsy atmosphere, coupled with Peranakan-inspired drinks and light bites, is where you’ll want to be for a mid-week drinking sesh with your pals.

The 43-seater bar is as cosy as home gets, and we felt right in our element. Come ready to get your senses teased!

Previous articleBrotzeit’s Magical Christmas Market: Celebrate This Festive Season With Mulled Wine & Christmas Platters ‘Til 2 January 2018
Next articlePak Kashmiri Delights: No Reason Not To Be Delighted With S$1 Naans At Tekka Market