Mala has been an ongoing food trend in recent times—yet, we can’t seem to stop searching for hot, steamy bowls of mala xiang guo. While there are popular mala stalls across Singapore that most mala fans know about, what about convenient spots near our education institutes?

Whether you’re just starting out in polytechnic or you’ve graduated, we’ve come up with a list of 10 mala places at every polytechnic in Singapore you should visit when you get the chance to.

To be able to judge fairly what’s best, we first need to establish consistent parameters. For the sake of comparison, at every polytechnic, I ordered similar ingredients in the same quantity—enoki mushrooms, potato slices, beef, broccoli, luncheon meat and of course, Maggi noodles. I also ordered everything at zhong la (medium spice level).

To determine the best mala stall also means I had to judge both the ma 麻 (numbing) and the la 辣 (spicy) flavours in said dishes. Unlike typical mala stalls, I wasn’t allowed to pick my own ingredients physically here. Instead, I had to point out the food I wanted, like at economic bee hoon or cai png stalls. 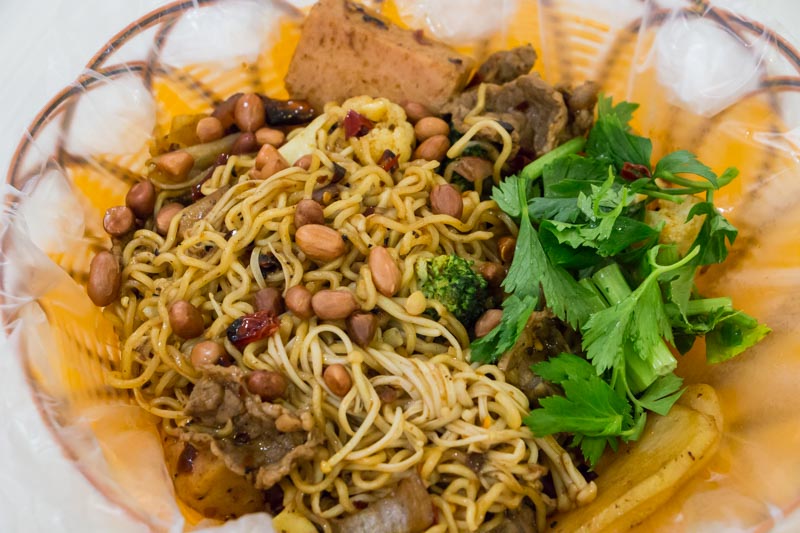 Starting off strong at International Mart at Nanyang Polytechnic, I got the bowl at S$8. It was a little salty and wasn’t as spicy as I wanted it to be, despite ordering the medium spice level. The potatoes were crunchy as if they weren’t cooked through properly, giving off a starchy and raw taste. Though there was a hint of sweetness in the noodles, I felt that the numbing spice was nowhere to be found.

The enoki mushrooms were mixed into the noodles, so they were evenly spread out in the dish. Chewy and well mixed in, the mushrooms brought out the umami flavours of the entire dish perfectly. A tad bit tough, the beef was overcooked but well-marinated. However, I found that the beef did not enhance the overall flavour to the mala and it was as if I was just eating stir-fried beef on the side.

For S$8, I think it is a fair amount to pay for this bowl of mala because I thoroughly enjoyed it, and genuinely thought it was not bad.

It took me a while to find Foodgle but I managed to make my way to the back entrance of the school. 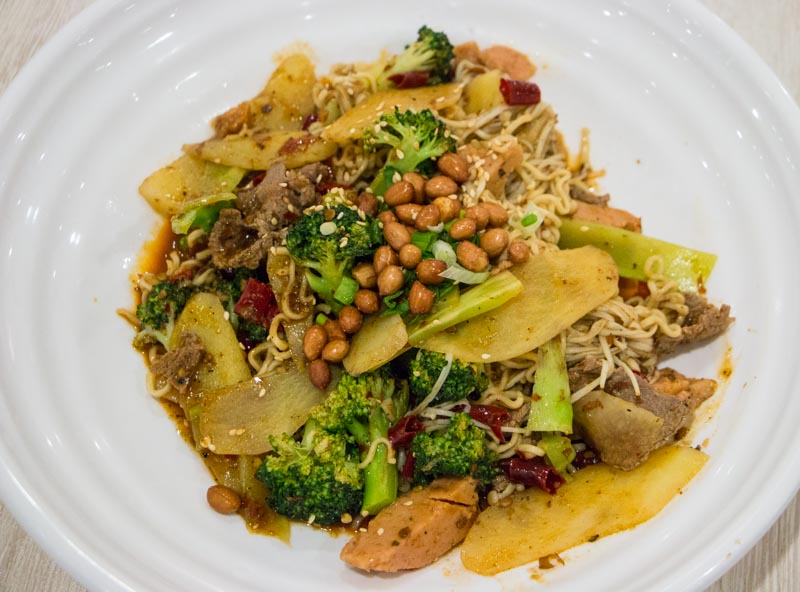 Foodgle’s mala cost me S$7.90, which wasn’t far off from that of International Mart.

Upon trying Foodgle’s mala concoction, I realised that the spices hit my senses differently here. The numbing component was evident, and the spiciness was incredibly overwhelming. The potatoes here were more cooked than that of International Mart, but I couldn’t taste any part of the mala on the potatoes. To me, it was no different from boiled potato slices. The beef at Foodgle was extremely tough, and the worst part was that it lacked flavour. I would not recommend picking beef if you’re up to try Foodgle’s mala.

Between International Mart and Foodgle, I would definitely go for International Mart’s mala solely because it was more flavourful and well-seasoned. However, if you’re looking for an authentic spice kick, then Foodgle might just be the one for you. 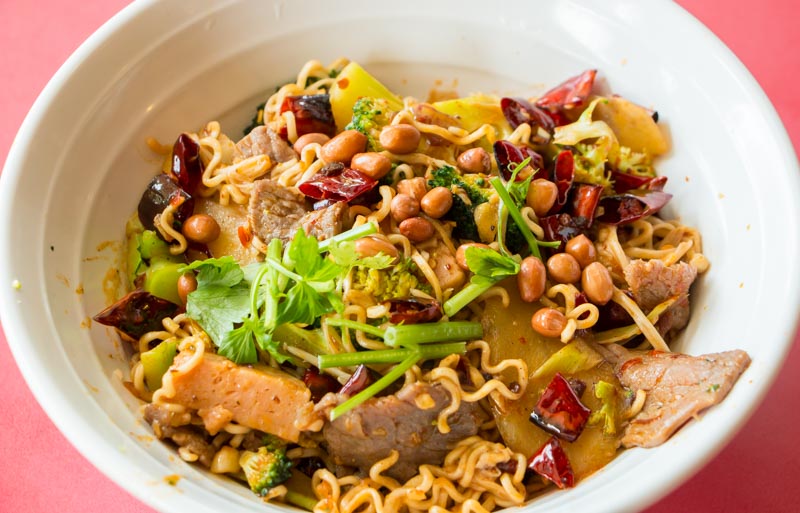 With Koufu as its parent company, Makan Place houses one of the more commonly-frequented mala xiang guo stalls in Singapore. At S$7.50, the broccoli was well-seasoned with the mala gravy, and the noodles were soft and well mixed in. The enoki mushrooms absorbed most of the mala gravy, yet retained its earthiness. Absolutely well done and chewy, the beef was one of the best I tried out of all the mala places across the different polytechnics. Visibly darker than usual, the mala bowl (S$7.55) that arrived at Food Club tasted unusually sweeter than the others. The broccoli was very fresh, but it was as if the vegetable had been doused in dark sauce.

Significantly saltier than the other bowls of mala I have tried, it was only mildly spicy. My dining partner even proclaimed that it shouldn’t be considered mala at all! 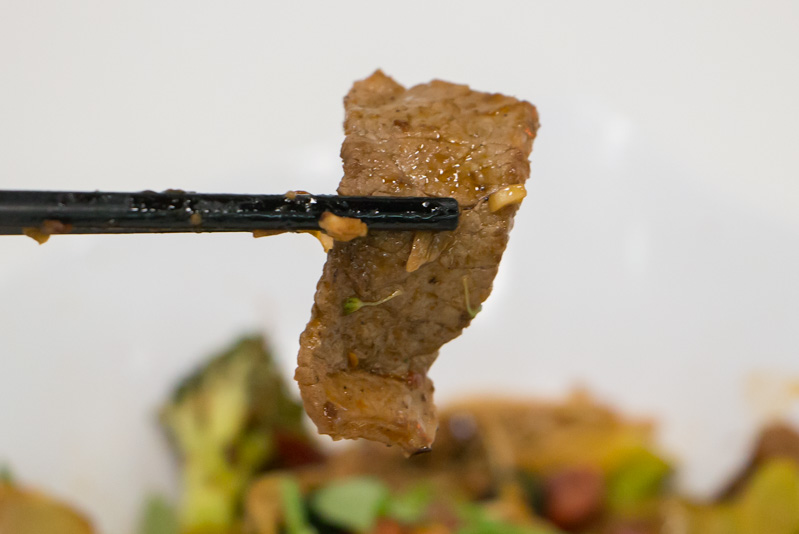 A common problem with mala—which Food Club runs into—is that the beef was very tough and required some jaw-work. Typically, I prefer tender meats, so this was just not for me.

Makan Place definitely takes the crown for best mala stall in Ngee Ann Polytechnic. It was not only flavourful, but it was also the cheaper option of the two. 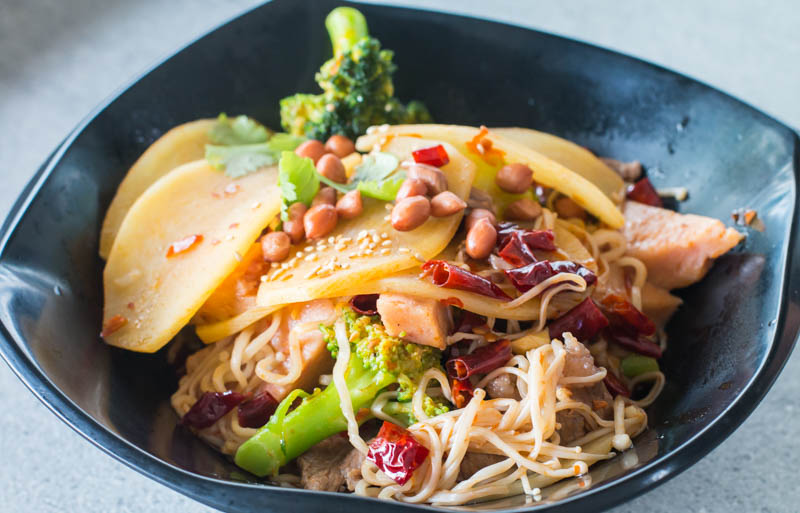 Down at Short Circuit, I was glad that the potatoes were not undercooked like at the other places. This bowl cost S$5.90, one of the most affordable mala bowls I have ever seen in Singapore.

One thing I noted was that it was significantly more watery than the other mala stalls I’ve tried, which resulted in softer noodles. Still, I was satisfied with both the numbing sensation and the spiciness at Short Circuit. I’m not kidding when I say I was perspiring profusely by the time I polished off the bowl. 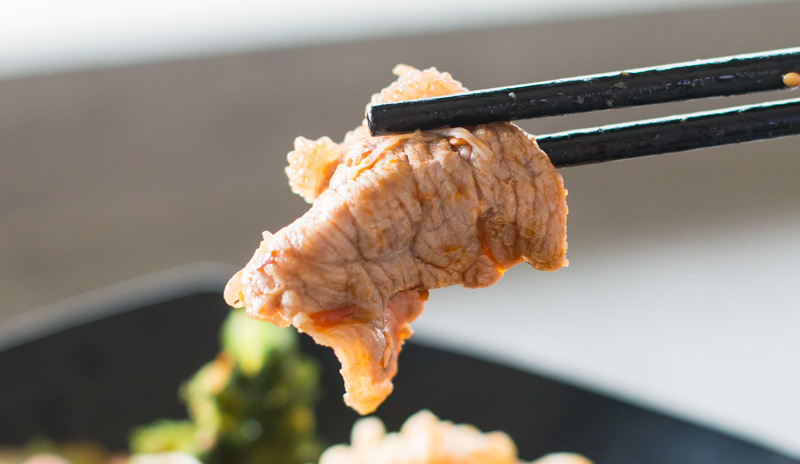 I was pleasantly surprised at how much I loved the way the beef was cooked here—even though it was a tad tough, it still wasn’t too hard to chew on. 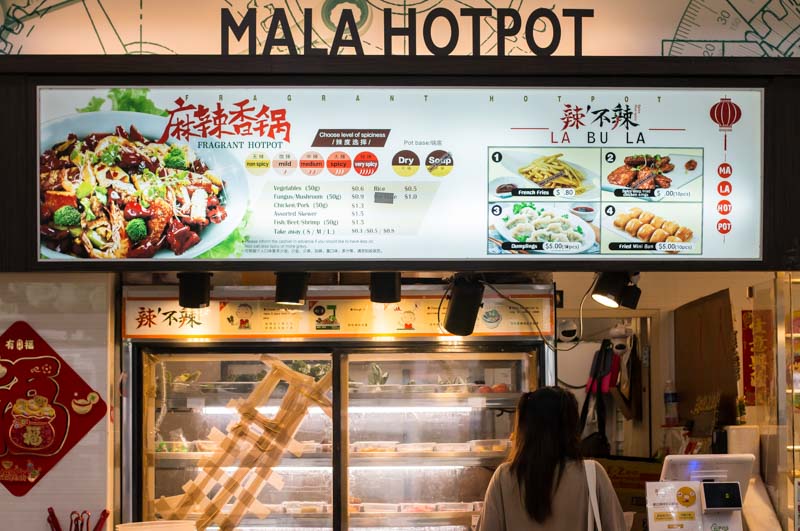 An extremely popular choice among Temasek Polytechnic students, La Bu La 辣不辣 is located at the school’s very own Bread Board. Interestingly, they offer two different styles of frying up these bowls of mala—Singaporean-style or Chinese-style. My guess is that the Chinese style consists of te la 特辣 (extreme spice level), which is one level up from da la 大辣 (high spice level). 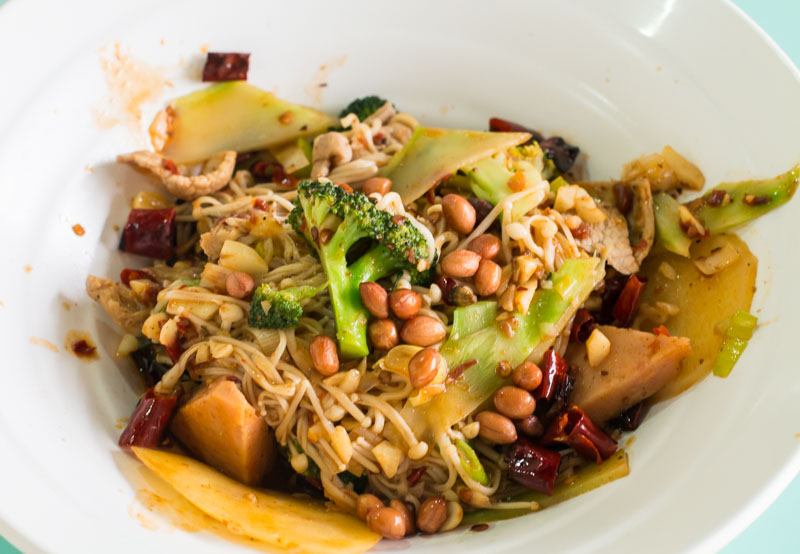 Upon receiving the bowl of mala (S$7.10), I noticed that the colour of the noodles was very light, and it made me worry that there was not going to be any flavour in this dish. 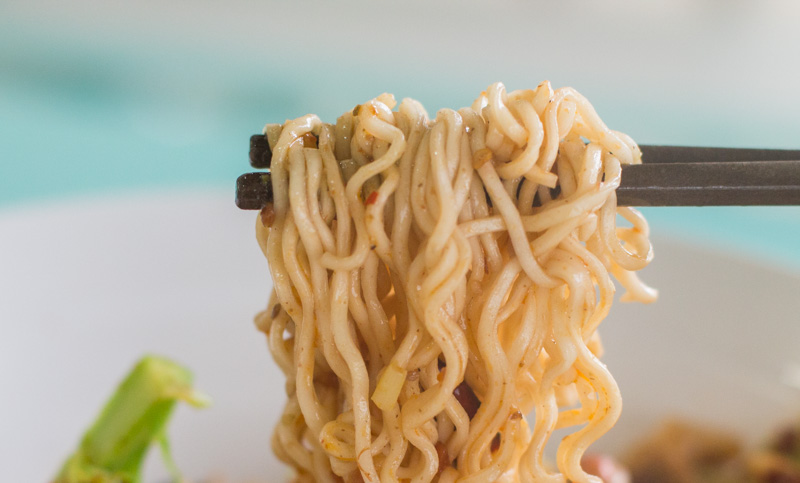 Despite its faint colour, the flavour was absolutely perfect. One of the best mala I have ever eaten in Singapore, it was 100% more flavourful than the rest. It wasn’t very spicy, but it was adequate.

Cooked with visible garlic bits, it was extremely fragrant and slightly sweet. Funnily enough, there was also a slight taste of MSG flavouring, but I liked it anyway. 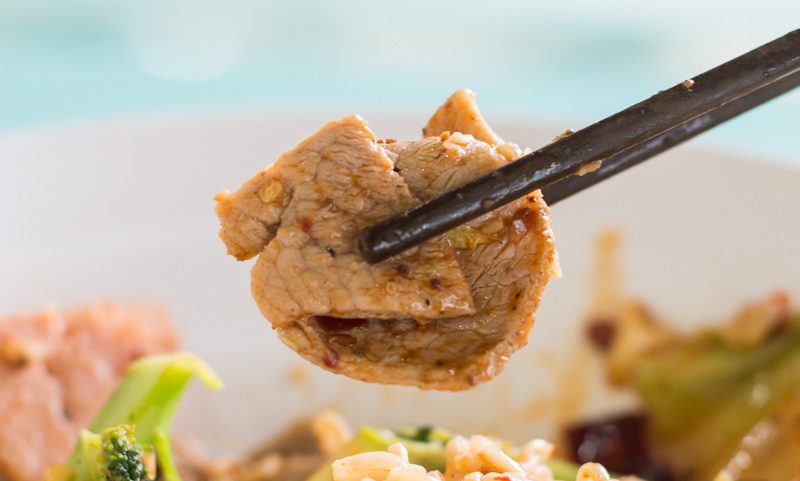 Due to the fact that they do not serve beef at the stall, I went for the pork meat instead. Well-cooked and seasoned in the mala gravy, I savoured every bite of the pork.

Even though it’s more expensive, I would highly recommend La Bu La’s mala over Short Circuit’s. Although they are both strong contenders, La Bu La outdid Short Circuit in terms of flavour. This is one of the most expensive mala bowls I’ve ever encountered in school—Singapore Polytechnic’s Food Court 3 serves up bowls that cost up to S$9.60. It was extremely fragrant, but I was appalled at how oily it was. At least you can look forward to a unique twist on the classic potato slices— Food Court 3 dished out thick potato fries instead. Crunchy throughout, I wished it was softer because it lost its mala taste in the starchiness. 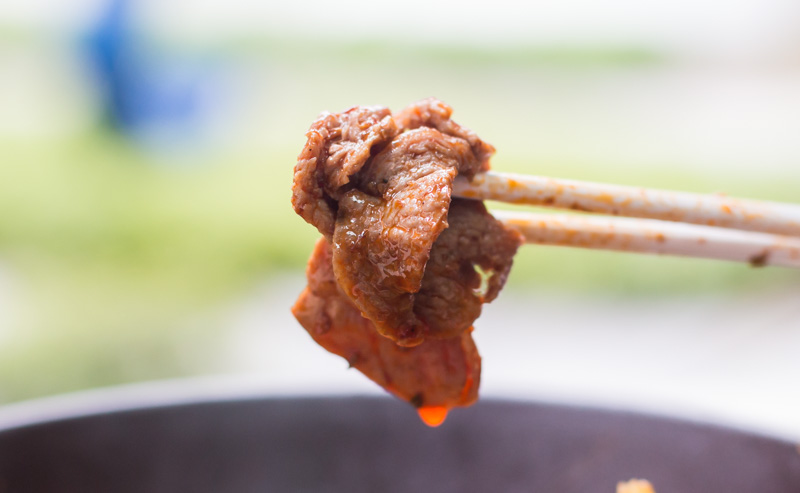 Easy to chew, the beef was tender but coated with oil. The ingredients were practically soaked in oil, and was extremely cloying because of the greasiness. Personally, I strongly disliked Food Court 3’s mala xiang guo because of this oiliness. Under the same parent company as Ngee Ann Polytechnic’s Makan Place, Food Court 4 served this particular bowl of mala at a whopping S$10.35.

It’s safe to say that it fared just as well as the mala at Makan Place, but at a higher price. I especially loved the beef because it was tender and easy to chew on.

It’s no competition— Food Court 4 takes the cake for being the more remarkable mala stall in Singapore Polytechnic. Frankly speaking, I would rather pay a bit more than settle for mala doused in oil. Launched after the mala at Lawn Food Court, Republic Polytechnic’s North Canteen mala stall sees long queues of hungry students. When I first got the bowl, I immediately noticed the extremely strong and intense fragrance that made my mouth water. 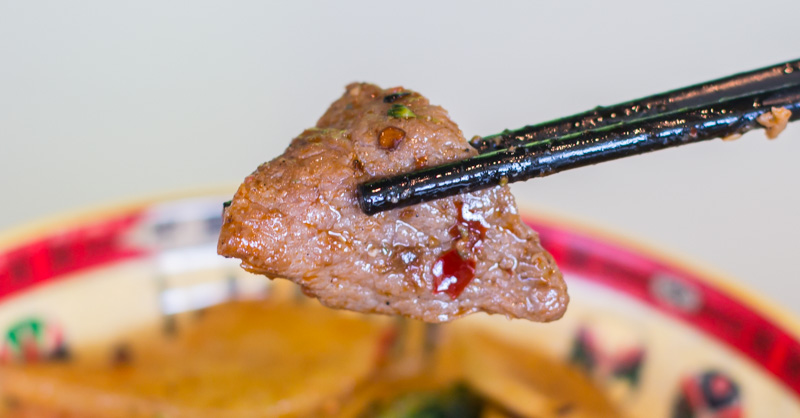 This was, by far, the best beef I had at all the polytechnics. Absolutely tender and soft, it was full of flavour, and it felt like the best component out of the whole dish.

The broccoli absorbed the gravy impeccably and the luncheon meat was incredibly tasty. This was one of the only mala places where I actually tasted the numbing sensation in the mala. The numbness I felt was unbelievable because it lingered even after my first bite, yet it didn’t compromise on the spiciness at all.

On the slightly more expensive side, I still felt that this dish was worth the whole S$9.10. As Republic Polytechnic’s first mala stall, I was somewhat disappointed that it was under the same parent company as Ngee Ann Polytechnic’s Food Club. At Lawn Food Court, one bowl of mala cost me S$7.15.

It must have been cooked in the exact same way as it was at Food Club, because the noodles came exceptionally dark and it tasted as if it had been fried in dark sauce. Extremely salty with a tinge of sweetness, Lawn Food Court’s mala was slightly spicier than the one at Food Club.

It was practically a no-brainer when it came to choosing the best mala in Republic Polytechnic because to me, North Canteen’s mala won by a mile.

If you ever find yourself in a bind of what to eat and you’re a mala lover like me, I hope this article was helpful in making your decision. Personally, my top two would be Republic Polytechnic’s North Canteen and Temasek Polytechnic’s La Bu La 辣不辣. Be sure to check them out if you’re ever in the area, and let us know what you think!