Satays are wonderful skewered candied meat that you can gnaw on all day and not feel guilty because of its bite-sized portions. Originated from Java, Indonesia, the snack is an adaptation of India Kebabs, but it is now leaner and less filling, finding its way to the heart of Singapore too.

There have been several renditions of the dish since crossing the borders to Malaysia and Singapore — these days the main choices include chicken, mutton, beef for Muslim stalls, and pork replacing beef for Chinese stalls for religious reasons.

The Singapore satay is served with a sweet and spicy peanut sauce, usually accompanied by ketupat (rice dumplings) and onions. I usually enjoy my satays without the peanut sauce, this helps me to get a better taste of the marinated meat.

The same for skipping on the ketupat, so I won’t be filled up by carbs so quickly — after all these are eaten as snacks and not a full fledged meal.

Here’s a list of the best satays in Singapore you can chomp on all day, every day! Beef, chicken, mutton ($0.70/stick, minimum 10 sticks). Heron Satay has been faithfully serving halal satays and chicken wings for over four decades at East Coast Lagoon Food Village. With the passing of Mr Haron earlier in 2016, his daughters have now taken over the stall.

Uncompromising on the marinating recipe and methods of barbecuing, the stall still serves up a selection of chicken, beef and mutton satays, along with a mix of fine and chunky peanut gravy that remain consistent. 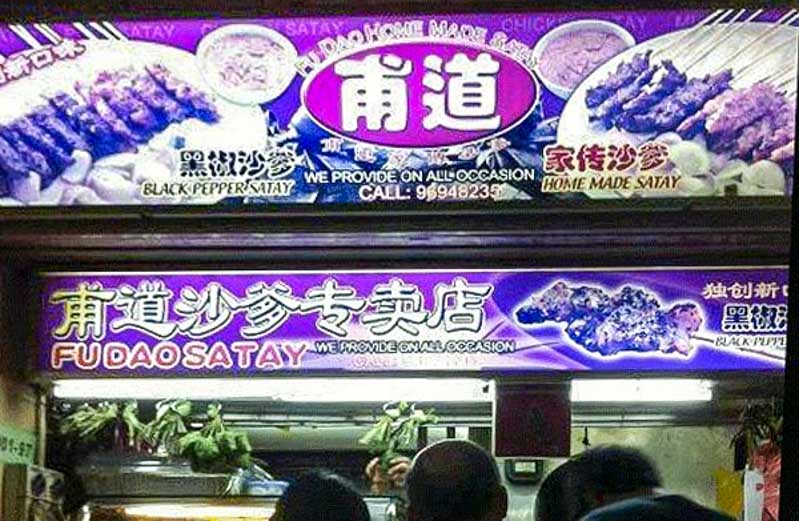 Fu Dao Home Made Satay is conveniently located at the first row of stalls of Old Airport Food Centre  — usually packed with people standing in line, it’s not hard to miss the stall. 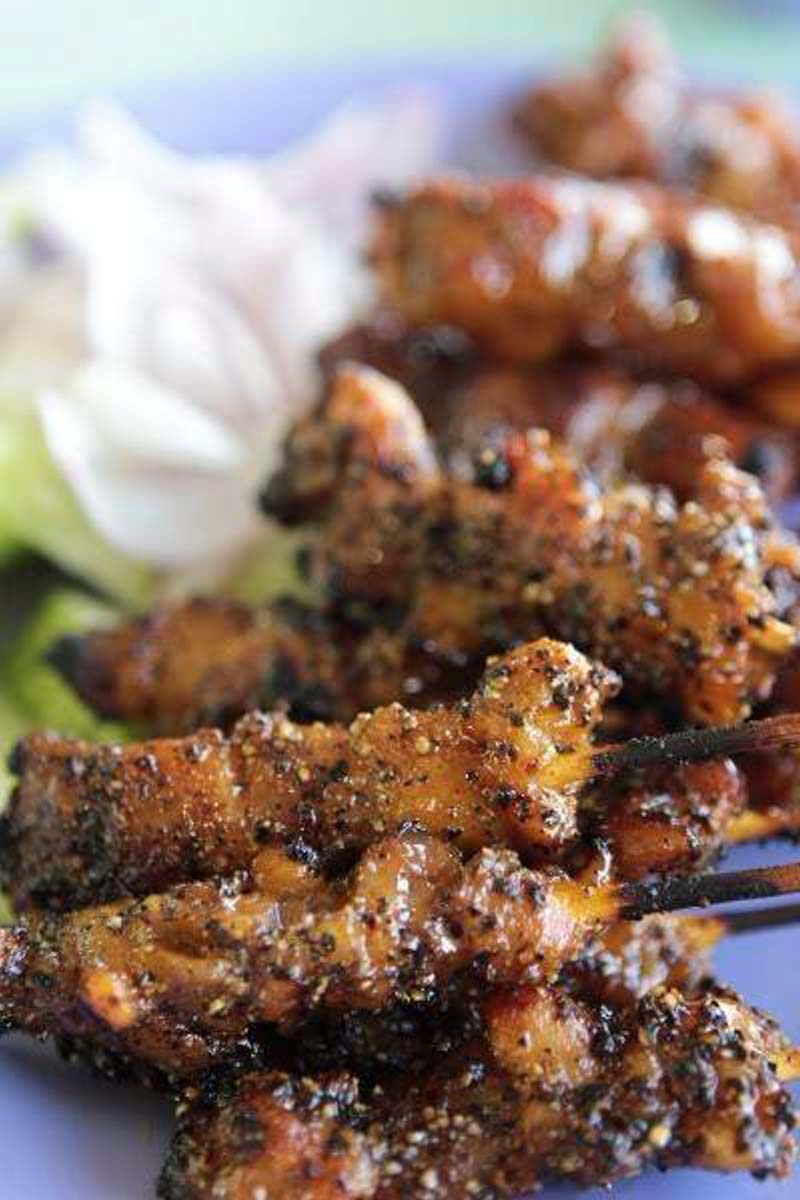 Chicken, Pork Satay ($0.40/stick, minimum 10 sticks). If you’re looking for a satay that is completely unique, Fu Dao Home Made Satay sets itself apart by offering the black pepper satay flavour, which adds an aromatic punch to the sweetly flavoured meat.

Economically priced at $0.40 for its chicken and pork satay, it’s no wonder why it remains a popular favourite among hungry goers. 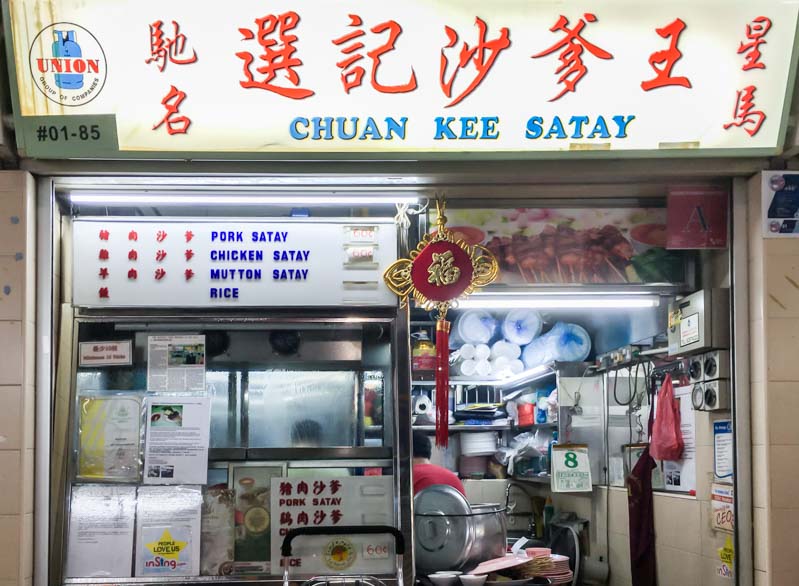 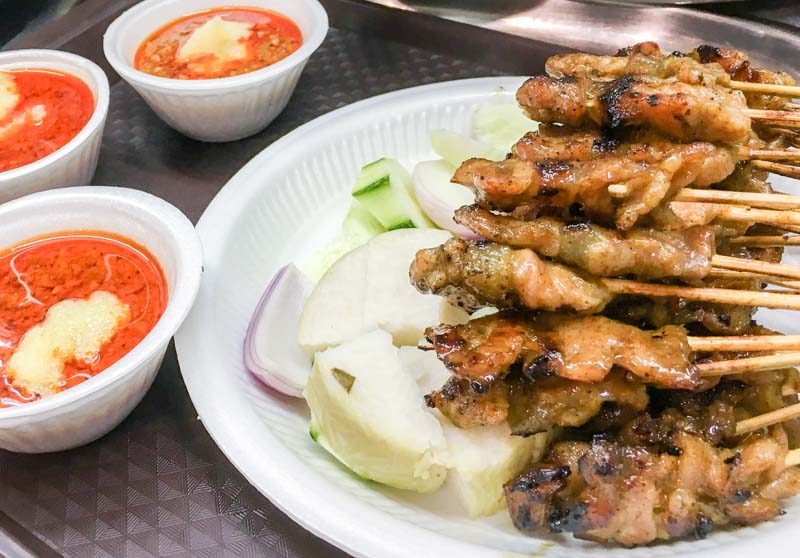 Though it closes at 10pm, be sure to come early to be secured of a plate of these traditional Hainanese pork satay. The wait can last you from 30 to 45 minutes on busy days.

These sticks need no more introduction — glistening in sweet caramelised marinate, the succulent pork skewers are amazing as you pair it with the fiery red peanut sauce with grated pineapple. Pork, Chicken, Mutton Satay ($0.90/stick, minimum 10 sticks). While the stall specialises in barbecue chicken wings, you could also curb your satay cravings during lunch for those who are working in town.

Situated in the bustling Food Opera of Ion Orchard, you may not think that the stall can fire up a good charcoal station for barbecuing the meat. On the contrary, the satay had a pretty decent charred flavour to it. 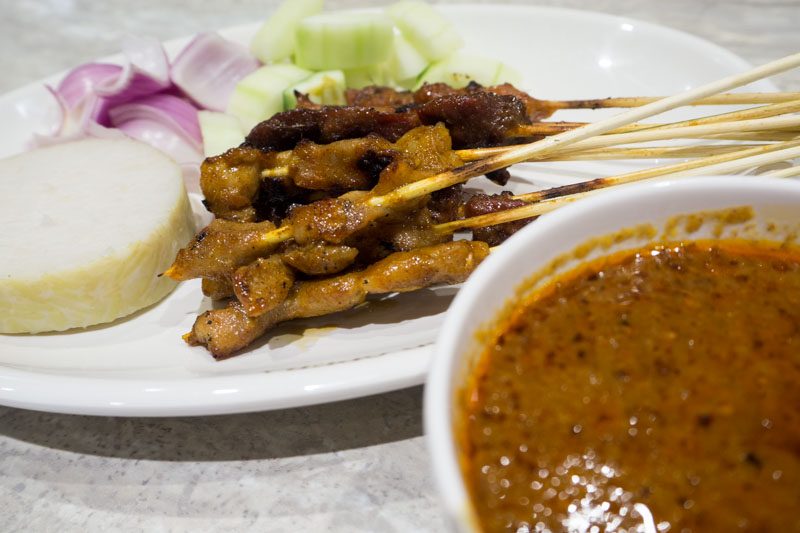 The meat was well marinated, albeit a little thinner and more expensive than usual. The peanut sauce was thick with bits of crunchy grounded peanuts in it. 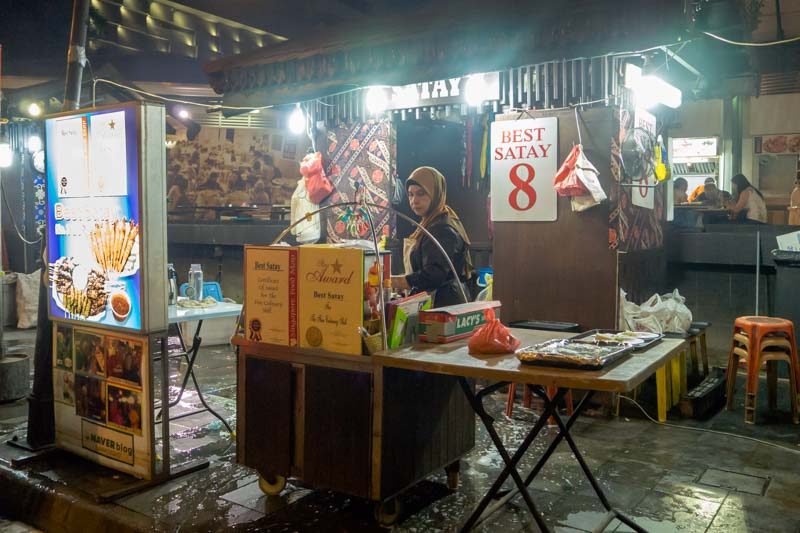 Available in different sets to choose from, the stall serves up chicken, mutton, beef and prawn skewers, which are adequately seasoned to the core. 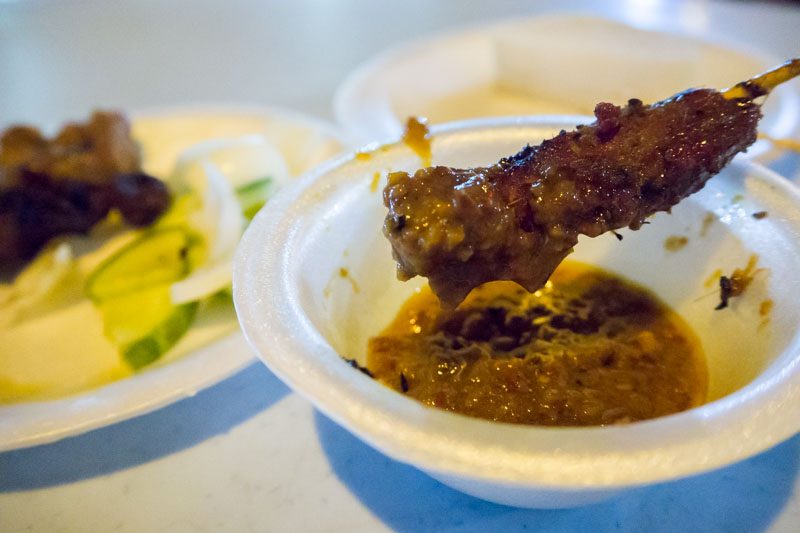 Surprisingly, the peanut sauce took center stage, with visible bits of chilli in it, adding a spicy hint with each bite. 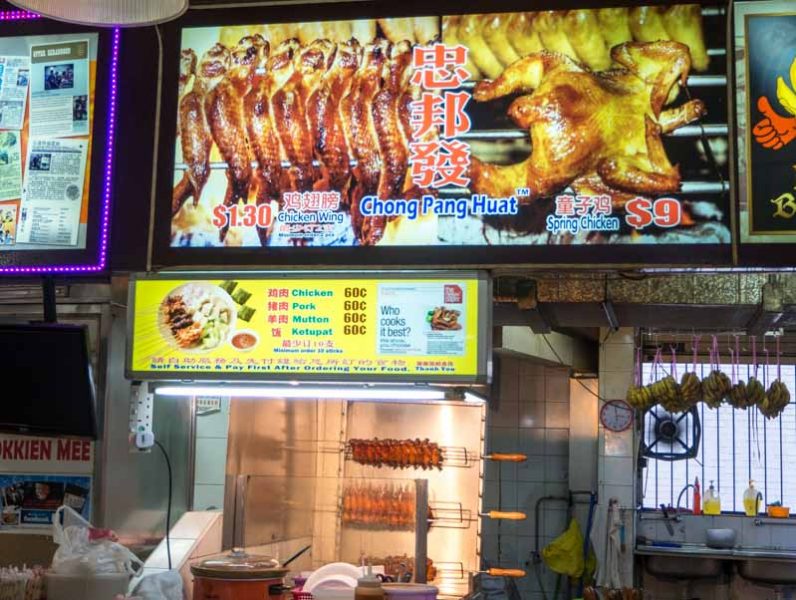 You could taste lemongrass and other spices in the mutton skewers, which made the mutton smell less overpowering. The peanut sauce had a smooth paste texture with chunky bits of peanuts, reminiscence of peanut butter, but you might be put off by the layer of oil seen on top of the sauce.

The skin of the cucumber was removed and remained chilled when served, unlike many stalls that serve up shrivelled, dried up cucumber slices. Serving only chicken and pork options, they are slowly barbecued on charcoals that are constantly replenished to keep the low heat consistent. 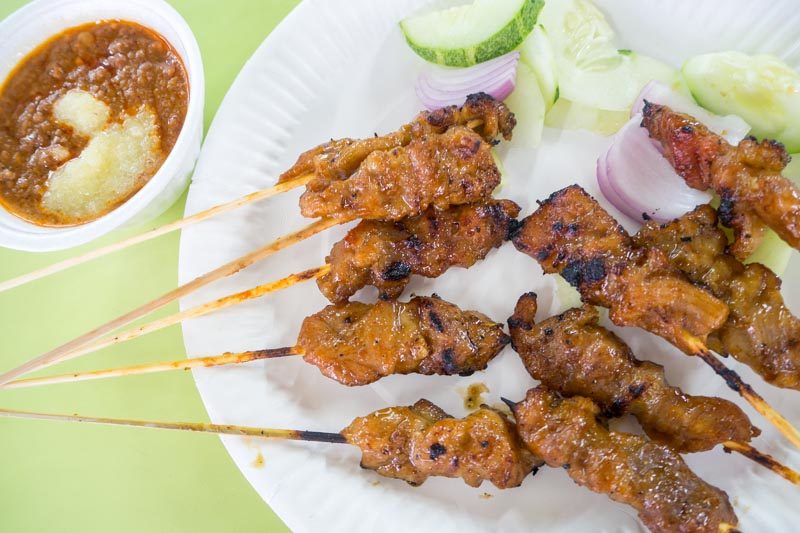 The meat is slightly charred for taste, juicy and tender from the inside out, and surprises with a crunchy lard in the middle of the pork satay. The peanut sauce comes with a dollop of grated pineapple, but the citrus taste was overpowered by the peanut.

While it takes a bit of patience to meander though the maze of stalls in Chinatown Complex, Shi Xiang is a hidden gem you should visit. Chicken, pork satay ($0.50/stick, minimum 10 sticks). For those staying in Toa Payoh, you’re in for a delectable treat. Fang Yuan Satay is located in the bustling food centre of Lorong 5. Be prepared to wait in line for at least 15 to 20 minutes during dinner time. 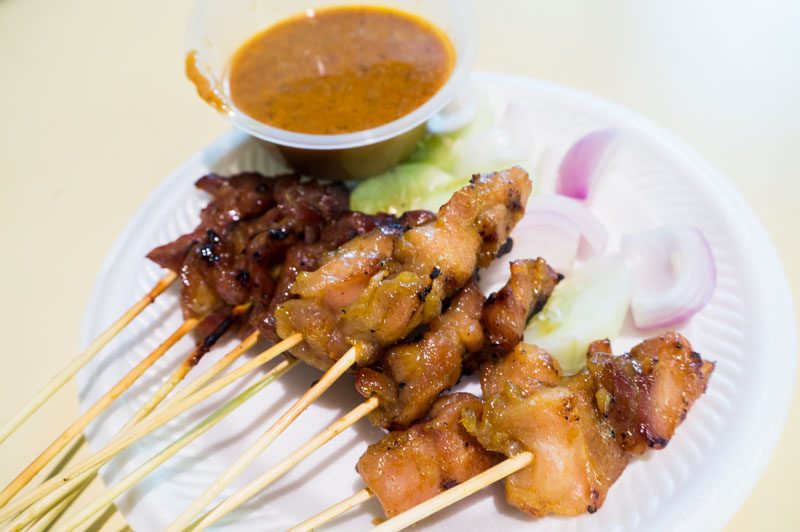 Sweet sweet candy-like meat is all I can think of when I sink my teeth into it, accompanied by a pleasantly chewy meat texture. Unlike most satay stalls, the peanut dip is served warm, which I appreciated it very much. Previous articleUsQuBa Singapore: Sip On The Finest Scotch and Dine Like A True Highlander
Next articleDinner In The Sky Malaysia : A Death-Defying Dining Experience Worth Risking Your Life For